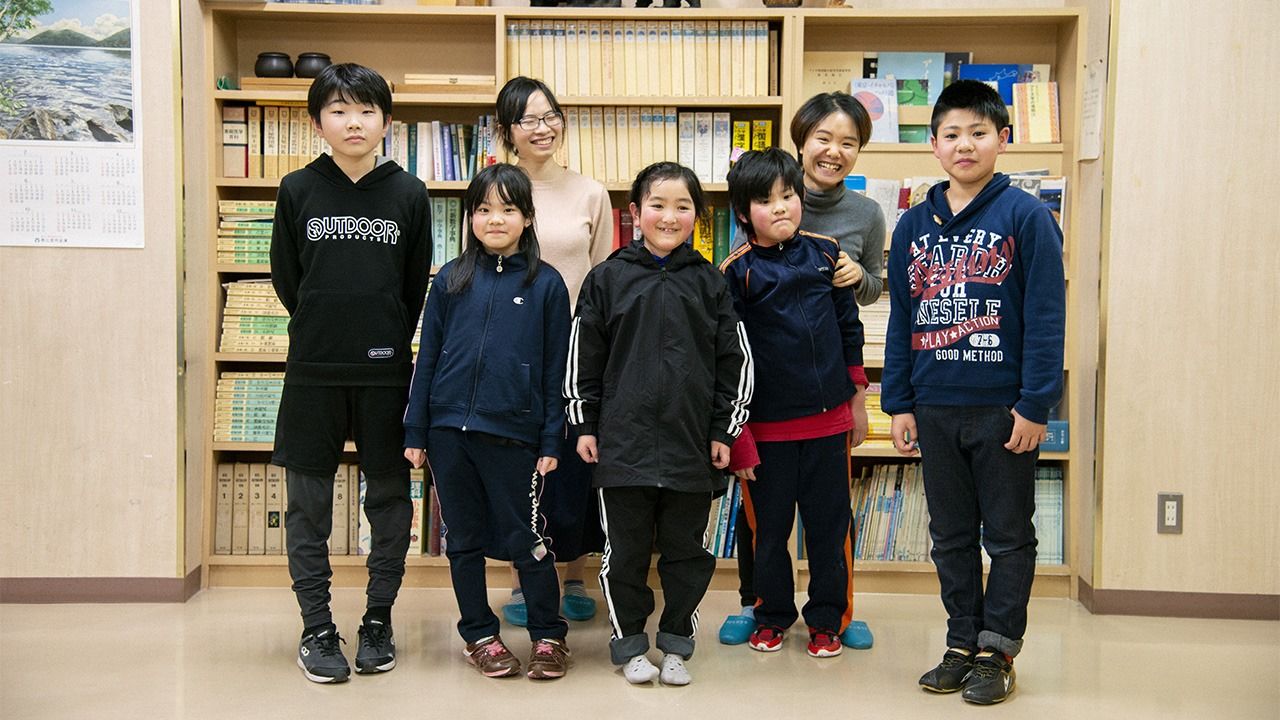 Society May 10, 2021
The Etekekampa Association in Obihiro, Hokkaidō, has been providing study support to Ainu children for the past three decades. In 2020, its thirtieth anniversary, it received the Ainu Cultural Promotion Award from the Foundation for Ainu Culture. The article traces the organization’s efforts to fight the effects of poverty and discrimination.

In June 1990, the Etekekampa Association opened a private tutoring school in Obihiro, Hokkaidō, for local Ainu youth. “When we first talked about launching Eteke, people were disparaging, questioning what could be achieved by bringing children together for study,” recalls 72-year-old Kimura Masae, chair of the organization. “But soon after the group started, it drew many children, even those who didn’t attend school.”

Etekekampa means “let’s join our hands” in the Ainu language, although most students, alumni, and members of the organization refer to the school simply as Eteke. 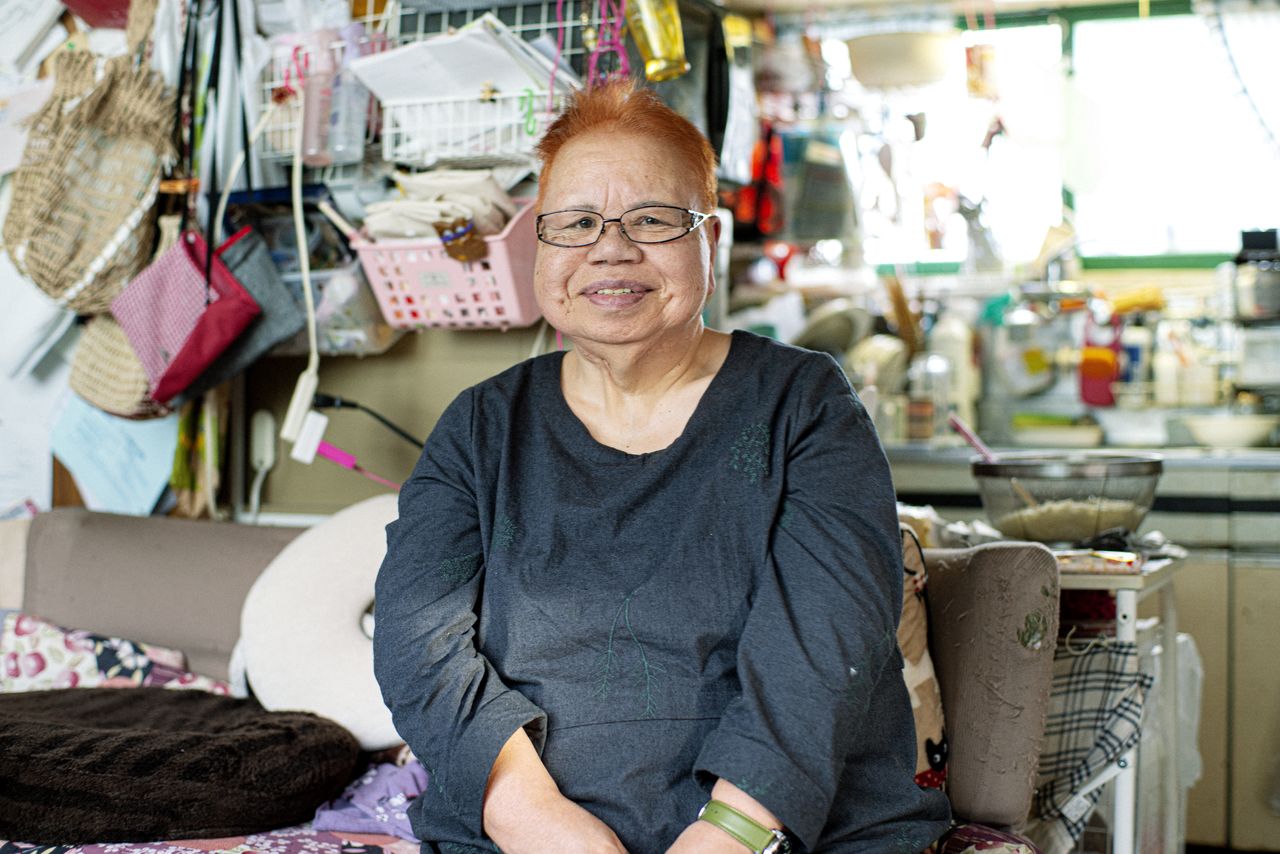 Addressing the Needs of Young Ainu

The group formed after the release of a government study highlighting the educational disadvantages that Ainu students face. The 1986 Hokkaidō Ainu Living Conditions Survey revealed that only 8% of Ainu youth continued to tertiary education, around 19 percentage point below the regional average, and that they were often the target of discrimination at school as well as broader society. To Kimura and others, it drove home the message that children needed a safer environment in which to study.

Eteke holds meetings each Thursday at the Obihiro Seikatsu-kan, a prefectural government-funded community center that supports Ainu-related cultural and social activities. A diverse range of volunteers run classes, including school teachers, university students, and even Buddhist priests. The group also holds regular events for children and family members, including camps, sports days, excursions, Christmas parties, and events to mark milestones like the start of the new school year and graduation. Activities are funded through donations, and to date the group has provided almost 300 students a place to study and interact, free of charge.

Obihiro’s Seikatsu-kan, where traditional Ainu dance and other activities are held.

Initially, the group targeted single-mother families and truant children, but now it accepts any Ainu child. Kimura says that much of the recruitment has been by word of mouth among youths, declaring that “it’s been encouraging to see children telling their friends to come.”

Children are divided by age groups, with local university students and others in the community providing tutoring. Tag is a popular activity during break times.

A Legacy of Discrimination and Poverty.

Kimura was born in 1949 in Nakagawa, a district in the town of Ikeda near Obihiro. The small settlement consisted of around 30 households that were a mixture of Ainu families and families where one or more members were not of Ainu heritage. Kimura recalls seeing elderly women with traditional sinuye mouth tattoos when she was a child, a practice that is seldom observed today. In 1958, her mother died of tubercular lung cancer at the age of 33, leaving 9-year-old Kimura and her two siblings, aged 7 and 4, behind.

Kimura recalls accompanying her mother to the hospital, an act that would have dire consequences to her own health and education. “I contracted peritonitis and was hospitalized for about 18 months,” she recounts. “I ended up missing out on grades four through six, which meant I didn’t learn important things like fractions and the Roman alphabet.”

During the 1950s and 1960s when Kimura went to school, discrimination against Ainu people was a fact of life. Abuse was blatant and culprits often went unpunished. She says that during her first year at junior high, a boy bullied her for being Ainu and that in retaliation she hit him over the head with a chair. “I decided I didn’t want to be at school anymore and left without even telling the teacher,” she says. “I felt so miserable that on the way home, I sat in the grass to search for four-leaf clovers and cried.”

Not long after, her father left, leaving her and her siblings with a paternal aunt. They were later placed in an orphanage in Obihiro. After moving to the facility, Kimura, now in her second year of junior high, began attending classes regularly. However, she struggled due to the gap in her education. “I couldn’t keep up in English class at all,” she explains. “Fortunately, my friend was kind enough to teach me the alphabet after school.”

The day after she graduated from junior high school, Kimura went to work. Lacking a home of her own, she lived in accommodations provided by her employer. Looking back, she believes discrimination and poverty robbed her of the simple joy of learning, but that this sorrow has since fueled her perseverance with Eteke.

A Place to Learn and Play in Peace

For Ainu children, Eteke offers a safe environment to learn and play with their peers away from school, where they face bullying from their non-Ainu classmates. Sakai Mari, a 39-year-old homemaker in Obihiro says she first attended Eteke in 1991, a year after its founding. “I was in the fourth grade when a friend invited me to come along,” she recalls. “My siblings and I never played with friends outdoors, so my parents were all in favor of me joining the weekly gatherings.”

Her husband Sakai Manabu, who works as a mechanic, is also a former Eteke student. He joined in 1993 during his first year of high school at the insistence of his mother. “I mostly messed around at school and never studied,” he says. “I couldn’t do division and was barely able to do multiplication. My mother encouraged me to join to Eteke so that I wouldn’t fail high school.” 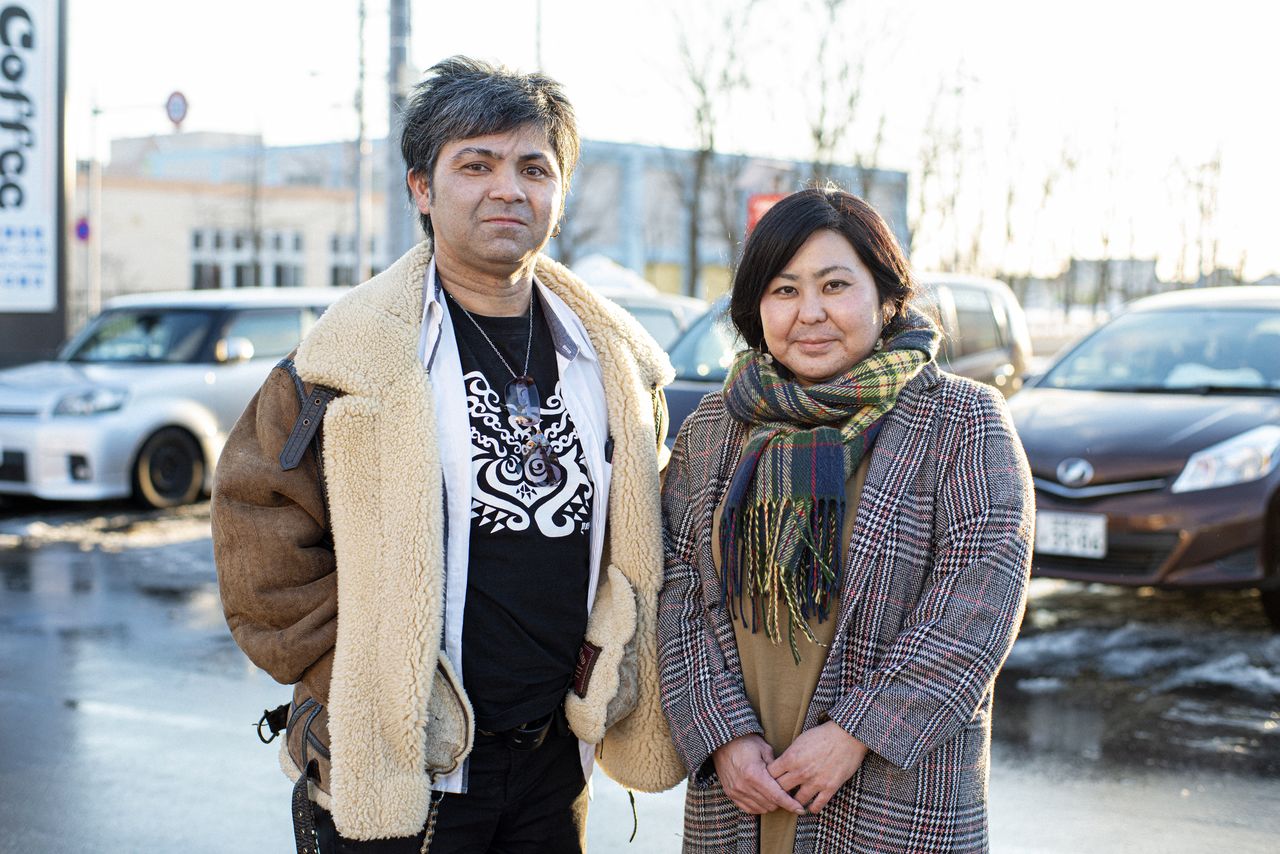 Another alumni is 35-year-old Arata Yūki, who began attending Eteke in 1992 while a first grader in elementary school. He now lives in Shiraoi and works at the Upopoy National Ainu Museum and Park, which opened in 2020.

Arata says he looked forward to going to Eteke each week, mostly to make friends and play with other Ainu children his own age. “I only attended officially until the end of elementary school,” he recount, “but I still hung out with my friends there on and off until I finished high school.” Although he was more interested in smoking sessions in the park behind the center than studying, he admits that “it was still fun.” 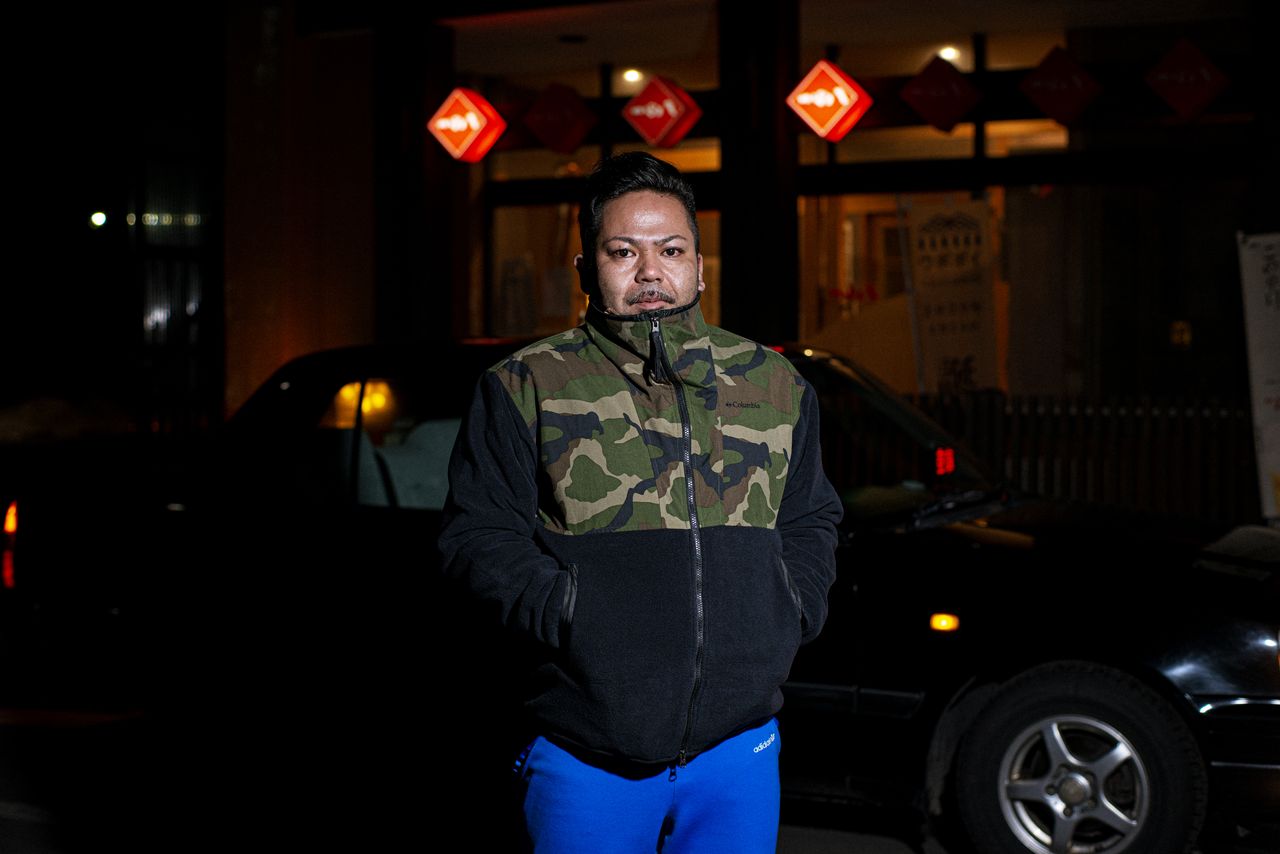 At that time, all three lived in a public housing complex in Ōzora, Obihiro.

The Ōzora public housing complex is comprised of rows of squat, uniform buildings. Built in 1970 to help accommodate Obihiro’s burgeoning population, it is located about eight kilometers southwest of the city center. It is currently home to some 10,000 residents, including many Ainu who moved there shortly after it opened.

Octogenarian Sasamura Jirō, having chaired the Ainu Association of Hokkaidō Obihiro branch from 1971 to 2018, is a walking encyclopedia of local Ainu knowledge. His three great-grandchildren now go to Eteke. He recounts how prior to being moved to the Ōzora complex, most Ainu residents lived in settlements called kotan located around Obihiro. The conditions inside the “Ainu apartments, as they came to be known, were far from ideal. “Forcing Ainu to move there was bad enough,” he declares, “but worse still, the units didn’t even have baths.” He points out that that a typical two-story wooden apartment for non-Ainu residents would have a bath downstairs. “It was obviously discrimination. We could use the public bath, but Ainu hate to be seen naked.” 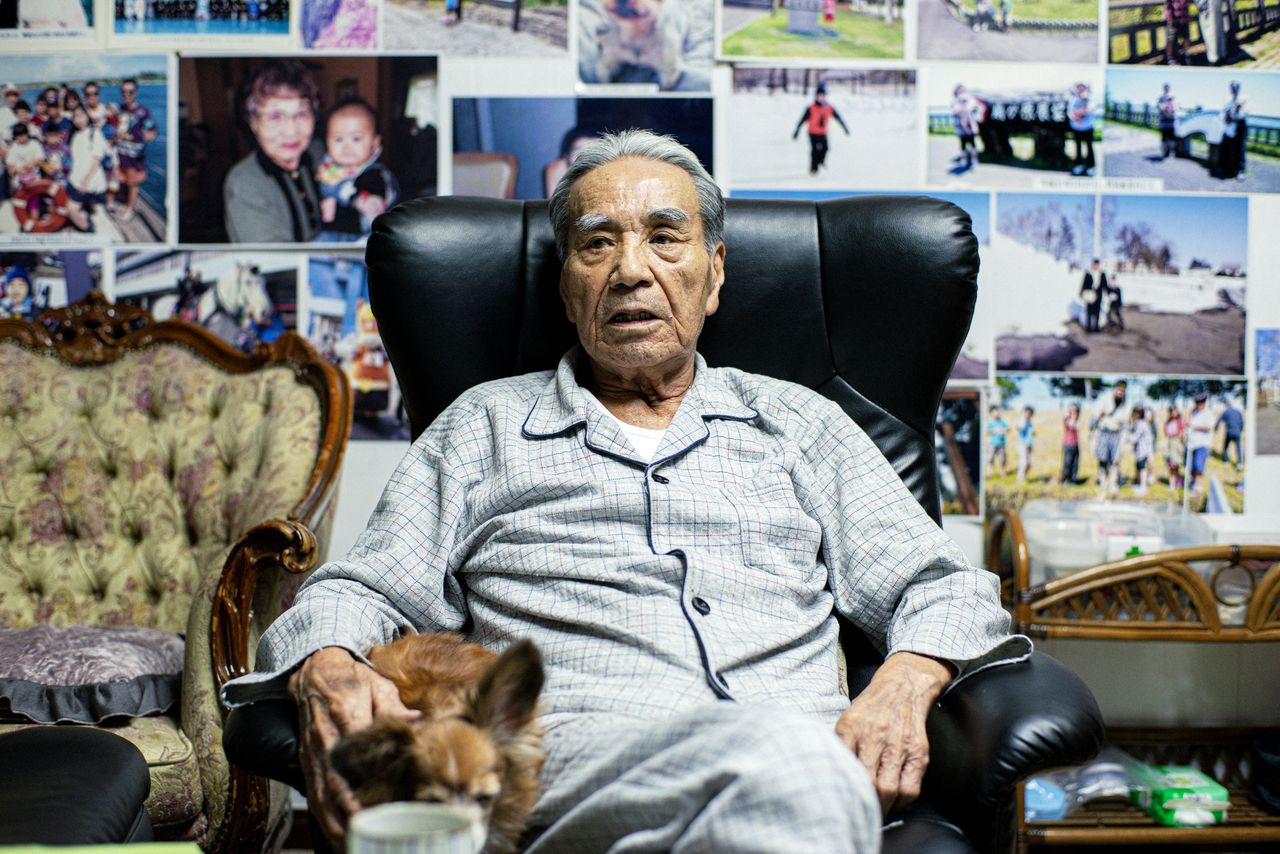 Kimura Masae also lived in the Ōzora complex. She worked as a housekeeper until she married, and then took a job as a cook at dormitories for construction workers in different areas of Hokkaidō. Around the time Ōzora was completed, Kimura, who was pregnant and caring for her small children, moved there with her family.

“On moving day we traveled by bus,” she says. “It took forever, and I asked myself why we had to move so far.” Not everything was bad, though. “It was new and clean, with a toilet and running water, although there was no bath. There was a local public bath, but I hated going, because many people sneered at us.”

Arata, who was born in 1985, says that during his time living at Ōzora, the apartments had a rough reputation. “When I was a kid, residents were either Ainu or no-goods,” he recalls. “A lot of people, Ainu and otherwise, came from the wrong side of the tracks. Ōzora was supposedly the first place in Obihiro to be connected to the sewerage system, so the complex was surrounded by modern houses. At school, Ainu kids like me were treated badly. Growing up, the only two options were to take it lying down or learn to fight back.”

The Sakais and Arata remain in contact with Kimura. “She’s a chatterbox,” jests Arata. “but she never lies. Watch out for her cat though—it’s a rascal.”

The affinity is shared by Kimura. Remembering her former pupils, she says that a lot has changed. “Children were so bad-mannered in the old days. The whole bunch were good-for-nothings. That’s not to say they were awful—they were all adorable.”

(Originally published in Japanese. Banner photo: Elementary school students and their tutor, a student from the Obihiro University of Agriculture and Veterinary Medicine. All photos by Ikeda Hiroshi.)