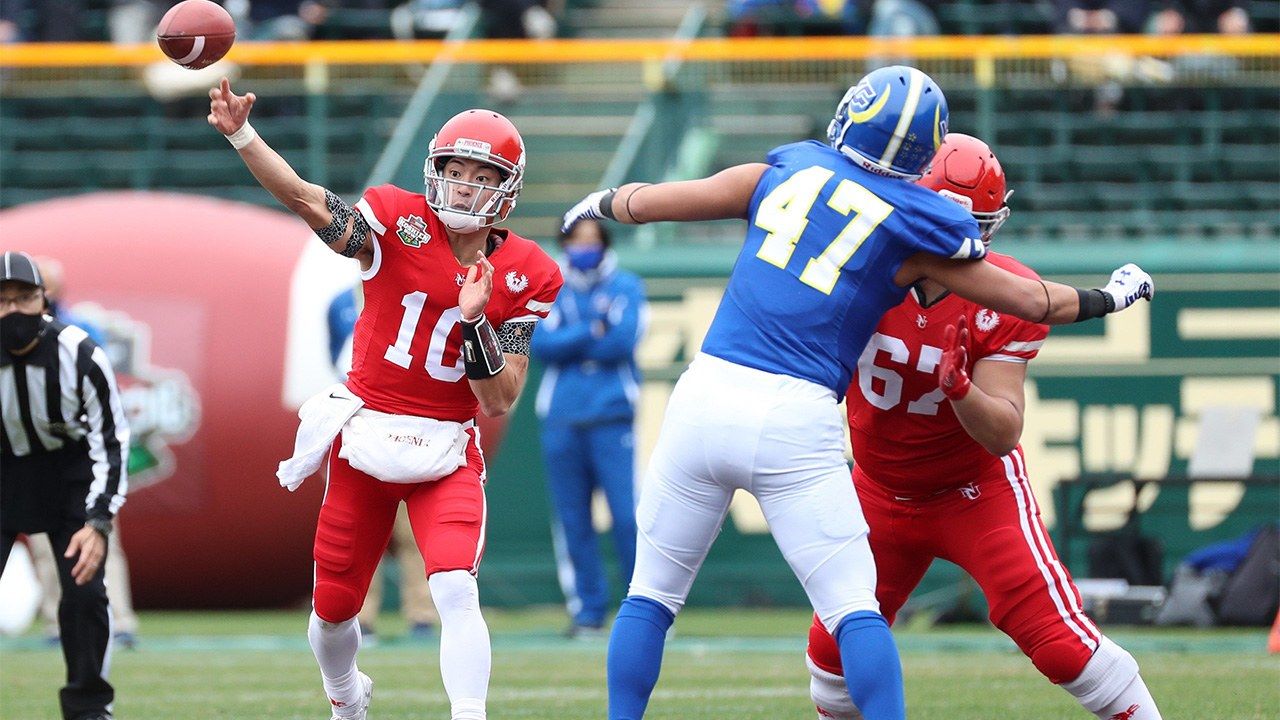 Sports Jun 24, 2021
Nihon University quarterback Hayashi Taiki saw his dream of leading the school’s storied American football team to back-to-back national championships upended in 2018 when a teammate’s violent hit on an opposing player set off a media maelstrom. He reflects on how the incident shaped his life perspective and his college career.

In the fall of 2018, emotions were running high among the players and staff of Nihon University’s American football team. The program had just seen long-time head coach Uchida Masato and assistant coach Inoue Tsutomu resign under pressure following allegations they had ordered a dirty hit on a rival team’s quarterback. The scandal resulted in governing body, the Kantō Collegiate Football Association, suspending the school from official competitions. Newly appointed manager Hashizume Isao, a veteran who was chosen for the job from among 69 candidates, faced a frustrated and demoralized team.

One day things came to a head. “Shut up!” Quarterback Hayashi Taiki’s words rang across the field as he glared at Hashizume. In the rough-and-tumble world of American football, heated exchanges among players are not uncommon, but such an outburst at a coach was unheard of.

Hayashi, his college career now behind him, recounts the events that led up to the confrontation. “We were running plays in practice,” he explains. “I had just thrown an interception and after chasing down the defensive player, I gave him a push in the back and shouted that the play was over.” The shove, however, sent the player tumbling to the artificial turf. Hayashi insists that he quickly apologized to his teammate and went back to practicing, thinking the issues was finished. Hashizume took a different view. In front of the team, he scolded Hayashi for taking things too far. Surprised at the rebuke, Hayashi lost control of his emotions. “Everything I’d been dealing with came racing to the surface and the words were out of my mouth before I even realized it.”

The team had been thrust into crisis just four months earlier when a Nihon University player delivered a late hit on the opposing quarterback in a game against Kwansei Gakuin University. The disturbing image of the unwary Kwansei player being driven to the ground from behind, his head snapping back and arms flung akimbo, was replayed endlessly by Japanese media outlets who dubbed it the “dirty tackle incident.” Public sentiment quickly turned against the Nihon University football program, particularly coaches Uchida and Inoue, who were vilified in the press.

The team’s subsequent ban from competition was a blow to Hayashi, who the season before had led Nihon University to its first national championship in 27 years, an achievement he had hoped to repeat. Although sanctions were eventually lifted, the team was then handed the harsh punishment of relegation to a lower division where there would be no chance to vie for the title at the Kōshien Bowl.

Hashizume admits that he came to Nihon University knowing very little about the program. He had won the job by impressing the independent selection committee with his practical approach to football, something he had honed while in the United States on a coaching exchange, but could not recall facing the school during his time managing Ritsumeikan University. Like most people, he had an image of a team built on the old-fashioned values of guts and fighting spirit. 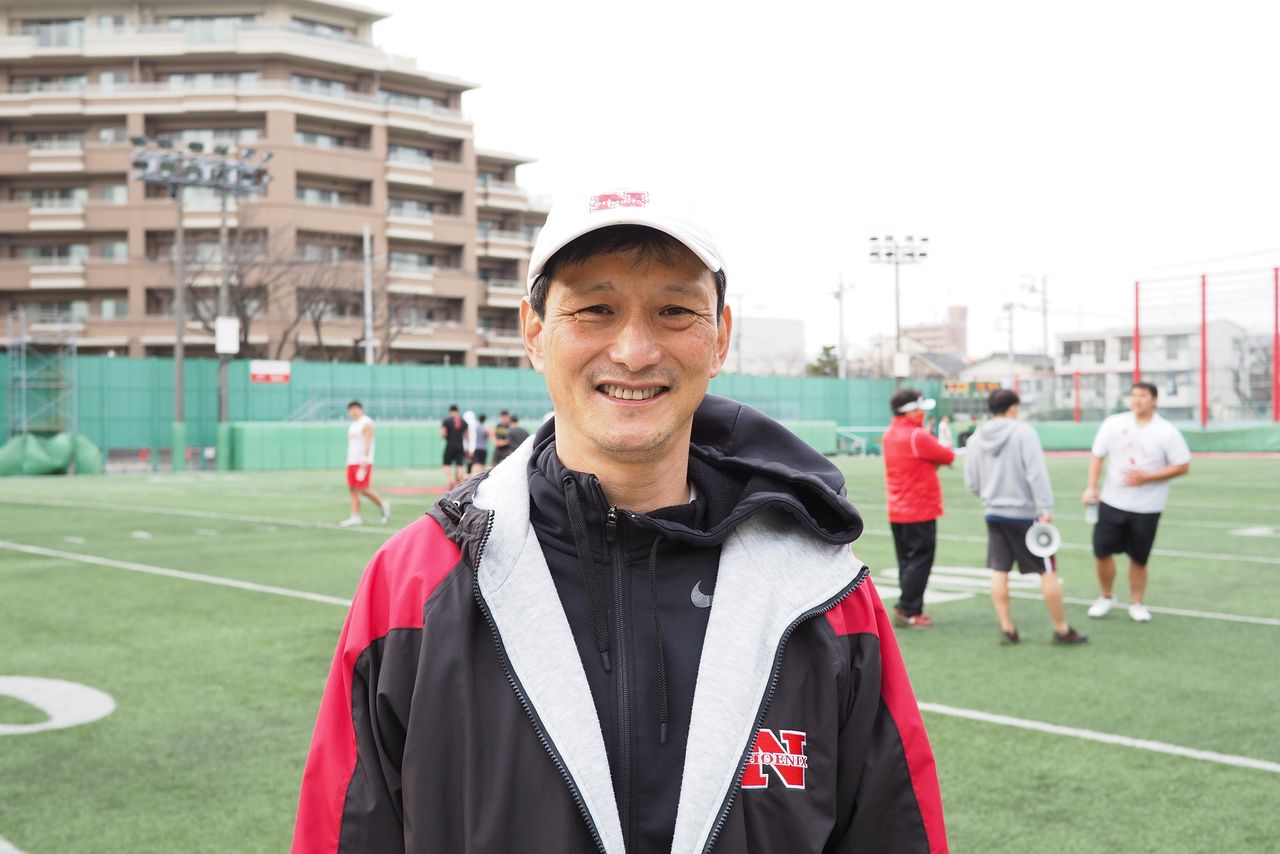 Nihon University American football coach Hishizume Isao. Having rebuilt the scandal-struck program, he will be stepping down in August 2021. (© Fuchi Takayuki)

“My impression was of long practices, six or seven hours, with staff getting physical and berating players who failed to show the appropriate drive,” Hashizume says. “I expected to find a bunch of super jocks. What I found, though, were normal college players.”

Once at the helm, Hashizume discarded the old system and steered the program in a completely new direction. He replaced the grueling, marathon practices with two-hour sessions, filling the time with drills intended to strengthen players’ game mentality as well as build their physical endurance. He shifted the emphasis from merely how much players trained to how effectively and efficiently they practiced in the expectation they would learn how to think on their feet rather than just follow orders.

For the players, transitioning to the new style meant unlearning deeply ingrained ideas and habits. Discarding these was far from an easy task. After all, Hayashi and his teammates had triumphed at the 2017 Kōshien Bowl, Hayashi himself earning MVP and player of the year honors, based on the previous coach’s physically demanding, top-down approach. Players believed in it.

“Up to then, we’d train close to twelve hours a day,” Hayashi says. “What’s more, we did drills and ran plays in small squads according to our positions. But with Hashizume, everyone practiced together, which meant vastly less time was spent on honing specific skills.” Hayashi and other players worried that this would affect their performance on the field and implored Hashizume to increase practice time, but the coach sternly rebuffed their pleas. Hayashi say team morale was in a shambles. “My heart wasn’t in it for the first six months.”

In the uproar following the dirty hit on the Kwansei quarterback, Hashizume’s predecessor Uchida and other members of the coaching staff came under fire for creating an atmosphere in which players unquestioningly followed orders. However, Hayashi takes a slightly different view. “We did what the coach said because we wanted to. We were proud to follow instructions.” The public took a sympathetic view of the young athletes, but Hayashi says this stung worse than if they had been deemed culpable in the affair. “I would have preferred getting bashed in the press to being pitied.”

Although Hayashi admits that players were conditioned to blindly follow orders, he insists that it produced strong team cohesion. “Everything boiled down to ability,” Hayashi explains. “A second-string player had few rights on the team, but someone who worked his way to the top of the lineup had a more of a say. You had to stay on top of your game, though, which was a huge motivator. No one wanted to incur the wrath of the coaches by messing up, so we kept our heads down and banded together. The teamwork was phenomenal.” 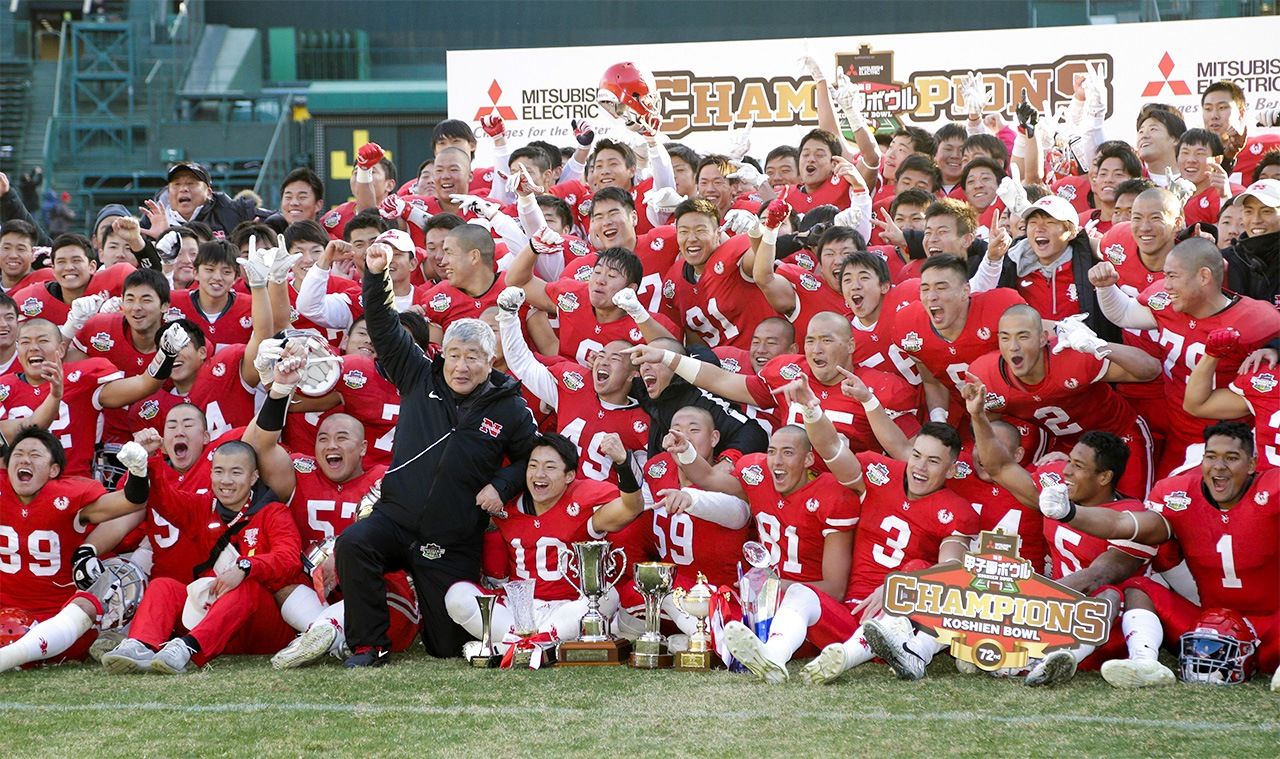 Breaking Through the Ice

The press took a less conciliatory view of the atmosphere at Nihon University, putting direct blame on the authoritarian atmosphere for the dirty tackle, a view that Hayashi refutes. “It wasn’t a situation of the coaches ordering a hit,” he argues. “A string of small misunderstandings snowballed, with the tackle being the unfortunate end result.”

Hashizume leans toward Hayashi’s interpretation of the incident, but he does not discount the team culture at the time as being a factor. “There was probably more at play than merely a direct order,” he says. “But there is no questioning that the players were trained to do what they were told without question.” He points to an incident shortly after taking over as coach. “I had other business and couldn’t attend practice, so I left instructions for everyone to do an hour of drills, focusing on fundamentals. Later, the players moaned about how hard the training had been, which didn’t make sense until I learned that instead of stopping after the allotted time, they had just kept repeating the menu.”

The experience clearly demonstrated the players’ tendency to blindly follow coaching instructions, but Hashizume insists that he did not specifically set out to reform the team. “I just coached the only way I know how,” he says. This included having team members call him by name rather than merely “coach,” a title he finds overly rigid. At the start, he worried that players, being used to an authoritarian style, would be too stuck in their ways to adapt to his decidedly casual approach. “This turned out not to be the case at all.”

Hayashi says that he was among the players who viewed the new Hashizume with suspicion, insisting that “I couldn’t read him.” In his junior year, though, a few words from an assistant coach prompted him to have change of heart. “He pulled me aside and confided that Hashizume had full confidence in my abilities. In that moment the penny dropped and I recognized that my enmity was nothing more than plain hard-headedness.”

Once over his ill feelings, Hayashi embraced Hashizume’s style, a decision he says completely altered his view of things. “Everything I’d seen as a minus up to then suddenly became a plus,” he declares. Shorter practices allowed players’ bodies to recover better, leading to fewer injuries. The quality of workouts also improved as team members learned to assess for themselves what areas they needed to work on. “There wasn’t a sense as before that we weren’t training hard enough. Instead, the feeling was that if we lost, it would be for lack of focus.”

With the team having finally come together, Nihon University went 7–0 during the 2019 season, winning the second division title and earning promotion to the top tier. The following year, Hayashi, now a senior, led the squad to the division championship and a trip to the Kōshien Bowl, where as fate would have it, they faced Kwansei Gakuin University.

The team’s comeback story was not to be, though. In the division championship game against Oberlin University, Hayashi injured his shoulder, sidelining him for the entire two weeks before the national title match. Although nowhere near top condition, he took the field at Kōshien Stadium in Hyōgo Prefecture anyway. But his lack of preparation and the lingering effects of his injury took their toll on his performance. In the end, Nihon University went down to defeat 24–42.

Looking back over his roller-coaster ride of a college career, Hayashi refuses to quibble over what could have been if the tackle scandal had never happened, insisting instead that he has no regrets. “Everything I went through, the good and the bad, propelled me forward as an athlete and as an individual,” he says. “It makes for a good story, too. I’m convinced that everything happens for a reason.” 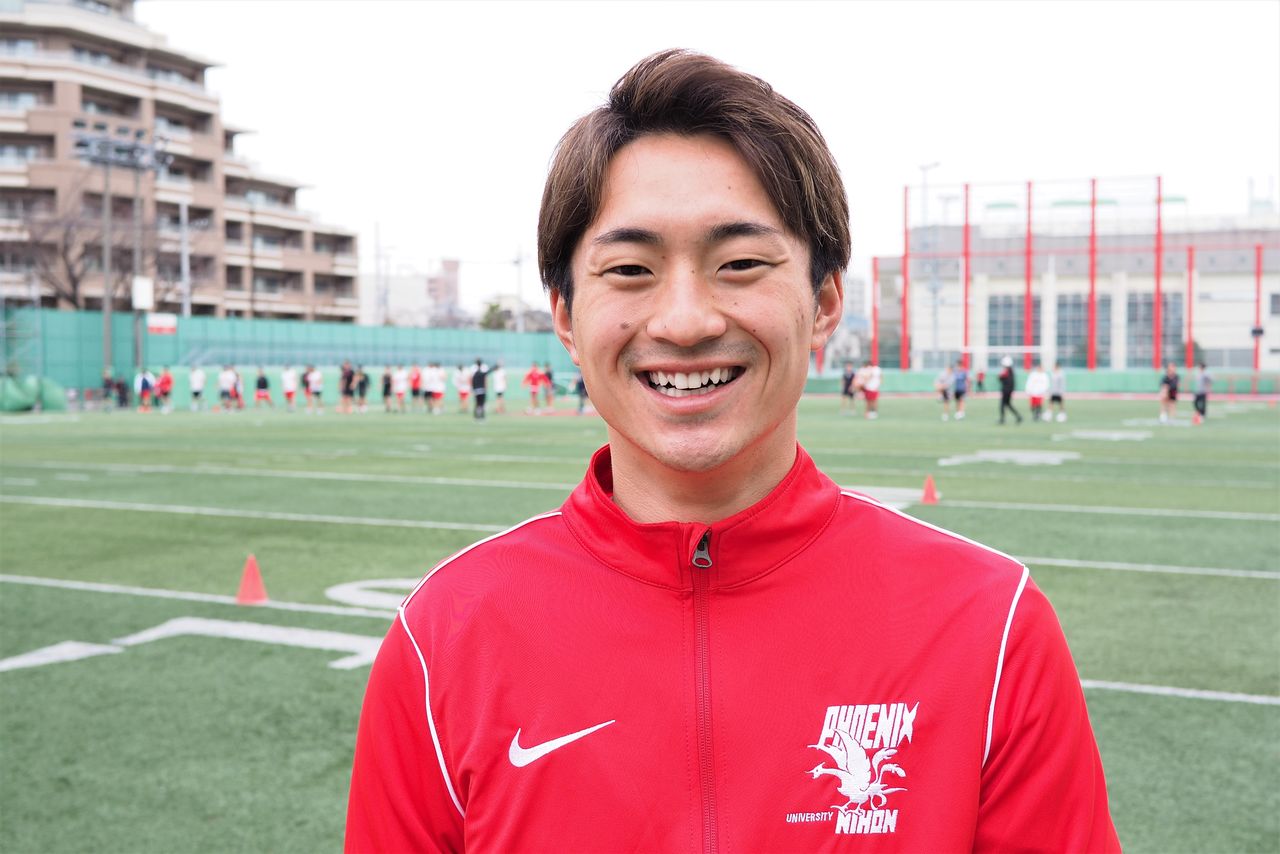 Hayashi Taiki says that without the melee over the tackle, he might have gone on to play for a corporate team, but that he does not lament his fate. (© Fuchi Takayuki)

After graduating, Hayashi joined Fuji Xerox, which sponsors a team that competes in the X-League, Japan’s top-level American football league. However, he is still being treated for his shoulder injury and has not committed to playing for the club. “I might get the urge to play again once I’m back to health,” he explains. “At the moment, though, I want to try my hand at being a regular employee.”

College athletics in Japan has come under increasing scrutiny for the rampant use of violence and other abusive behavior by coaches. Many consider the Nihon University tackle incident as one of the most egregious examples of the problem, but Hayashi takes an impartial view of harsh coaching tactics. “I think both strict and lenient approaches can be successful, although players aren’t always given a choice of which they get. Like in all things, though, a person has to decide for themselves how to play the hand they’re dealt. What’s most important is deciding how you want to live your life.”