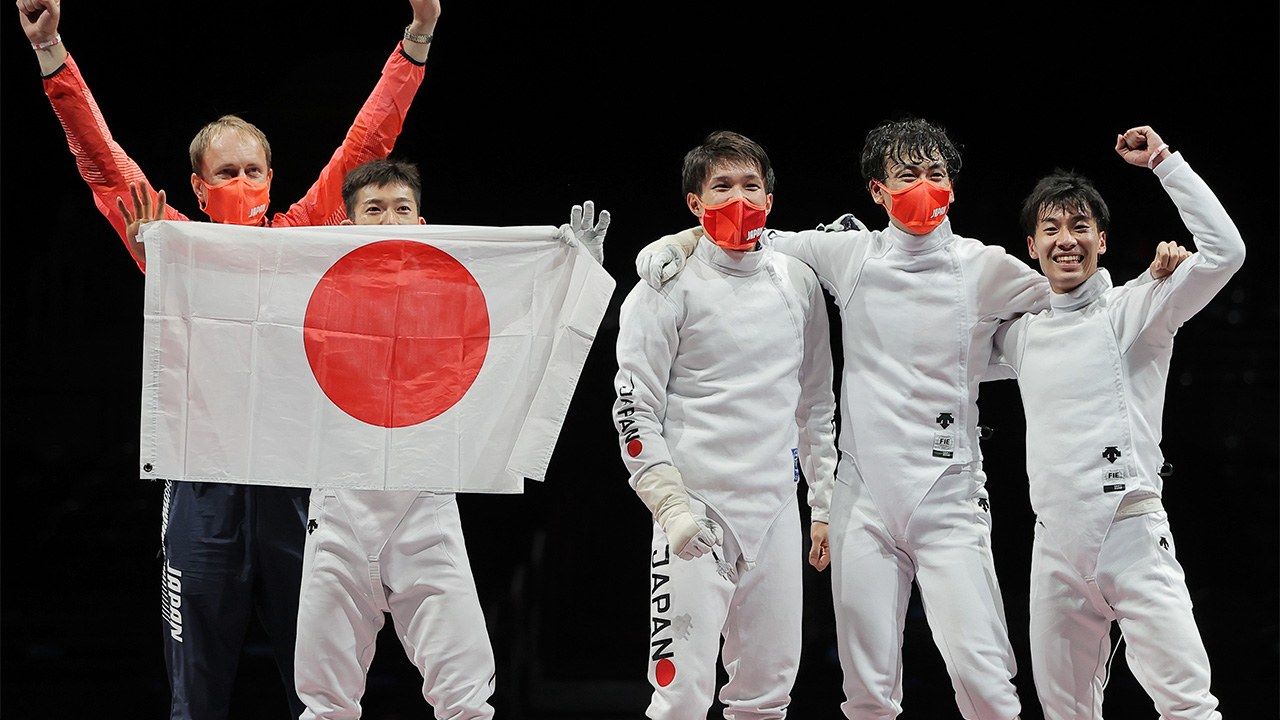 Tokyo 2020 Sports Aug 31, 2021
The Japanese men’s épée team took the country’s first ever fencing gold in the Tokyo games. The sport has always been less popular in Japan than in Europe or the United States, and the number of épée fencers is particularly small. That makes this success even more amazing, and the story behind it is one of a decade of constant improvement and athletic determination.

There are any number of accomplishments at the Tokyo Olympics that could well be called “spectacular.” One such achievement is surely Japan’s gold in the men’s team épée.

The Olympics feature three different fencing events: the épée, sabre, and foil. Japan has twice medaled in other events, with Ōta Yuki taking the individual foil silver in Beijing in 2008 and the men’s foil team taking silver in 2012 in London. This year’s medal is Japan’s first ever in épée, and first gold in any fencing event.

How could Japan, a minor force in the fencing world by any account, achieve this? To understand that, first we must know more about the history and present state of fencing in Japan.

Fencing is a competition between two athletes, each holding a blade one-handed, and is decided by the first strike on one’s opponent. It originated from the knightly swordplay of medieval Europe, then took hold particularly among the upper classes as a way to instill a spirit of chivalry.

It did not become a rule-based competitive sport until the early twentieth century, however, when the International Fencing Federation was founded in Paris in 1913. After the sport of fencing started in Europe, it then spread to the United States and Australia, where it is still quite popular.

The Great Japan Fencing Association—now the Japan Fencing Federation—was established in 1936 to serve as a focus for training toward the 1940 Tokyo Olympics, which were eventually cancelled due to the war. The sport has continued to spread slowly here, though, most likely because kendō is already so well-established. While there are students from elementary through high school all over Japan practicing kendō, there are only around 6,000 fencing competitors in the country. That is only around one tenth the number that France, a fencing powerhouse, boasts.

A Struggle to Remain Competitive

With the overall lack of popularity, the federation and the individual fencers lack major sponsors. Without that source of funding, the sport has long struggled to maintain its competitive activity.

From spring 2020 onward, the COVID-19 pandemic meant that athletes were largely unable to compete. As a result, Miyaki Ryō, member of the London Olympics silver medalist team, voluntarily terminated his sponsorship contract, saying, “Although it’s the pandemic keeping me from competing, I regret not being able to repay my sponsorship with wins.” There was talk that he would try being an Uber Eats delivery driver to help support his competitive career, but soon afterward Miyake failed to make the national team.

That decision would have been in character for Miyake, who has always been overly dedicated, but would not have been necessary if there were sufficient funding for training costs in the first place. The very idea would have been unthinkable for European fencing centers like France or Italy.

The competitive environment in Japan still lags far behind European and other fencing powers, in terms of both numbers of competitors and funding. Winning gold under such circumstances is what made the épée team’s performance such a spectacular achievement. 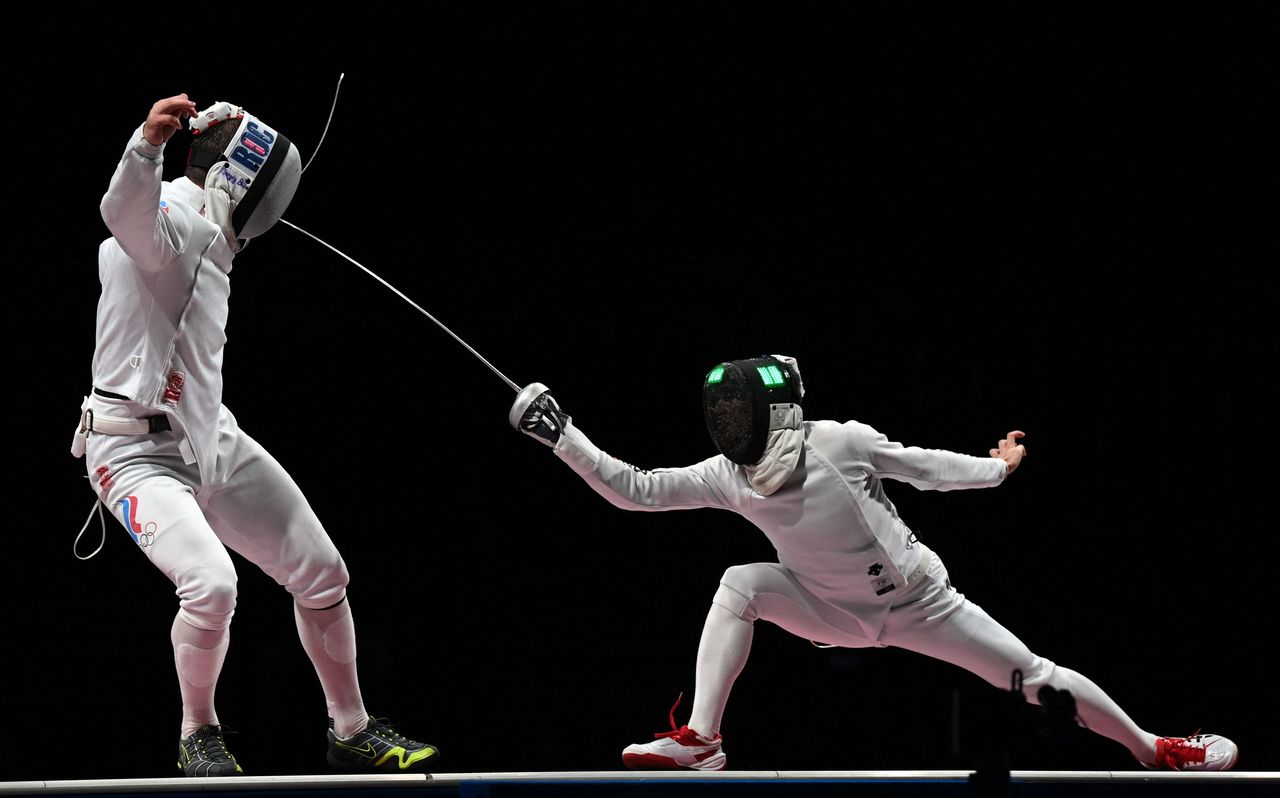 Kanō Kōki, at right, faces Russia’s Sergey Bida in the ninth match of the finals at the Tokyo Olympics on July 30, 2021, at Makuhari Messe in Chiba Prefecture. (© AFP/Jiji)

Another point worthy of discussion is that this gold came in the épée event. In contrast to sabre, which scores points for thrusting and slashing hits to the upper body, and foil, which scores points only for thrusting hits on the upper body, the épée can score with thrusting attacks to the entire body. It is the world’s most popular form of fencing, with the largest number of competitors.

However, for that very reason the conventional belief has long been that Japan would struggle to compete with world powerhouses in the épée. Few Japanese competitors choose the event, and even fewer have achieved any success in it, creating a vicious cycle. Now, this gold medal has broken that cycle and will surely change the course of fencing in Japan.

So, how did the team achieve this win?

The biggest factor was bringing in coaches from Ukraine, one of Europe’s fencing powerhouses. The first was Oleg Matseichuk, who began coaching the foil team in 2003 and led them to medal in two different Olympic games. Japan eventually invited Oleksandr Gorbachuk to coach the épée team in 2010.

These European coaches brought players insight into the continent’s techniques and training methods, which gradually produced results. Kanō Kōki, a member of the gold medal team, says, “I think we’ve caught up to the world in technique.”

Under Gorbachuk, the team has also spent extensive time at overseas training camps. Practicing with local fencers there allowed Japanese athletes to see for themselves what they lacked, so they knew what to work on to fill in the gaps. Those daily matches against international fencers helped the Japanese team sharpen the tools they needed to win.

Gorbachuk also actively recruited promising fencers to the épée. Yamada Masaru, who was a member of the gold medal team with Kanō, was invited to switch from the foil and join the épée team in junior high school.

In contrast to the past scarcity of funds, the decision to host the Tokyo Olympics led to increased support from the national government and the Japanese Olympic Committee. The team is still not exactly drowning in funds, but it has far more training resources than before.

At the start of the Tokyo games, Yamada, ranked fourth in the world, and three others, including fellow national team member Uyama Satoru, ranked in the top 16, which meant they did not need to go through international Olympic qualifying matches. The épée team was packed with members capable of making it to the winner’s podium. 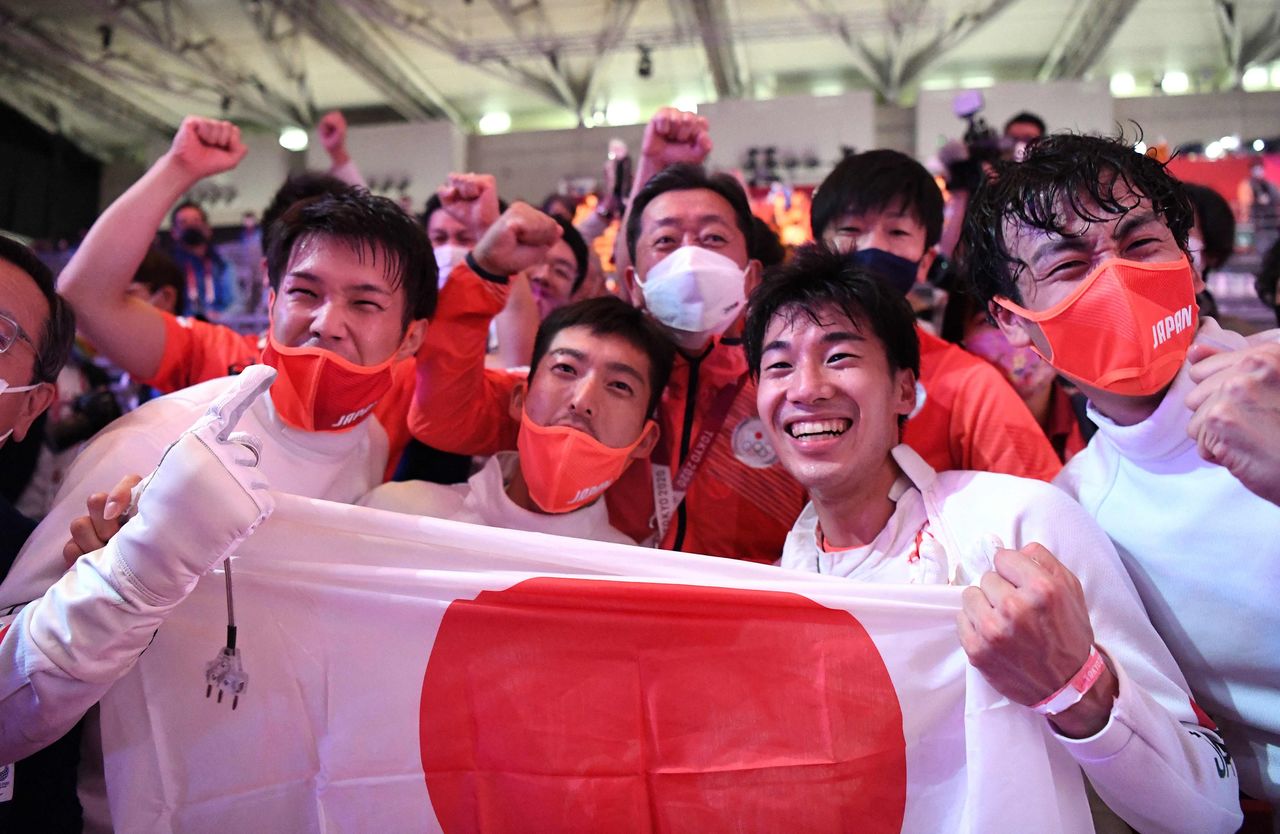 Japan’s Épée Army smiles after winning their battle on July 30, 2021, at Makuhari Messe in Chiba Prefecture. The experienced team has an average age of 28.3 years. (© AFP/Jiji)

The Age of Épée Begins Now

How did they come to jump up in the world rankings and take the winner’s spot so quickly?

The story starts with in the quarterfinals against France. Japan turned the tables against the world’s top-ranked team and three-time Olympic champion to win, despite trailing midway through the match. France’s performance was lackluster, perhaps because they were already ahead halfway through the tournament, while Japan continued to perform their best to the end, bringing out every bit of their true potential. The very strongest competitors often look too far ahead and let down their guard against low-ranked competitors. That could well be what happened to France.

Japan rode the momentum of that win through the semifinals against South Korea and then on to the finals against the Russians. That is what won them the laurels.

The driving force behind both the upset and the final victory in these Olympic games was the clear passion each fencer brought to the matches.

The foil had long been a focus for training in Japan because of an ingrained belief that the upper levels of épée competition would be too difficult. In Japan, the épée discipline has less than half the fencers that foil does. The presence of Ōta Yuki, two-time Olympic medalist and generally charismatic character, has also driven public perception that the foil is the end-all and be-all of fencing.

Before the games, Yamada said, “I want to usher in the age of the épée!” It could be that the athletes’ desire to raise awareness and spread the use of épée, this blade they have devoted themselves to, also helped bring about their spectacular gold medal.