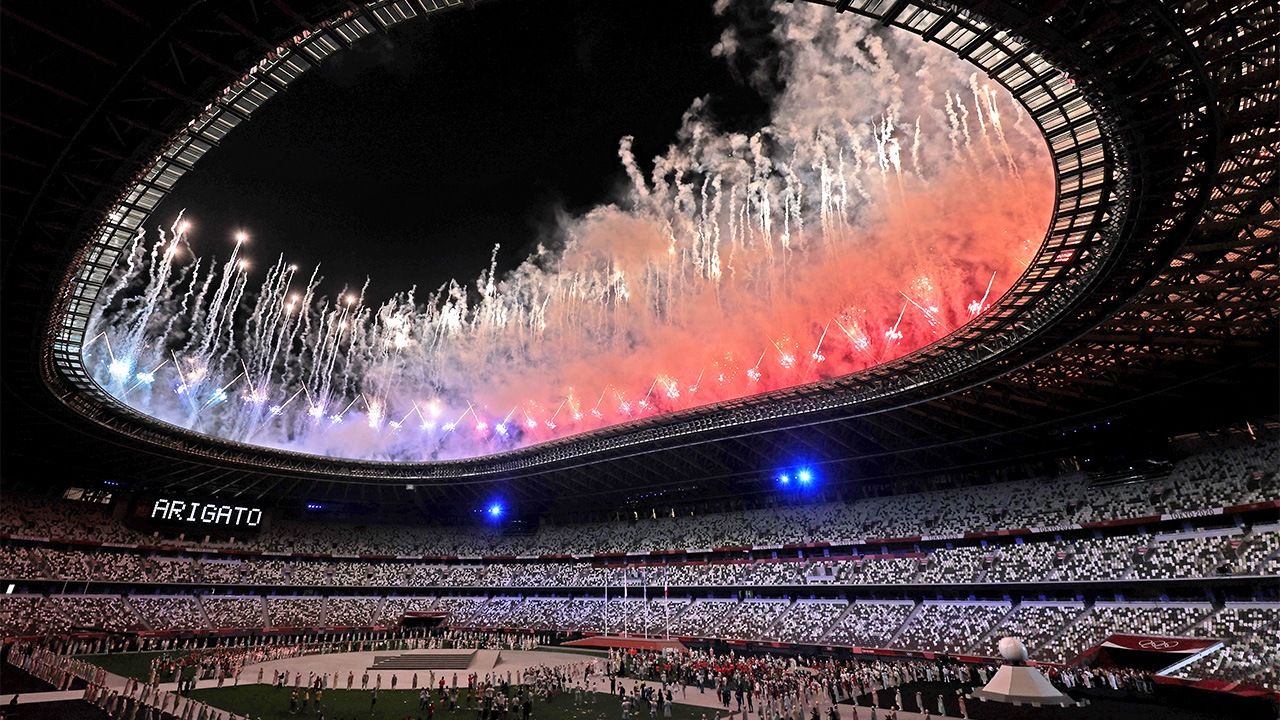 Reporting from the “Olympic Bubble”: A Journalist’s Insider Look at Tokyo 2020

Society Tokyo 2020 Sports Sep 6, 2021
The pandemic made the Tokyo Olympics an unprecedented sporting event in every way imaginable, from stands void of spectators to stringent COVID-19 countermeasures enforced at venues. A veteran reporter of nine Olympics, both summer and winter games, reflects on her experience at Tokyo 2020.

Tokyo 2020 defied predictions in the end. The Olympic Games, postponed a year until the summer of 2021, ended without any serious earthquakes or typhoons. The games also finished without a rash of major COVID-19 clusters, even as cases spiked in the capital, testament to the unflagging effort of staff and participants to uphold countermeasures. Guarded by the so-called Olympic bubble, athletes gave it their all on the field of play, demonstrating to the world the power of sports to move and inspire.

Heading into the Olympics, my greatest concern was protecting myself from COVID-19. The obvious worry about my health and wellbeing aside, coming down with the disease would have been disastrous from a reporting standpoint, as it would keep me from covering the games. As a journalist, I was privileged to report on the competitions in person—not even close family members of competitors or other important figures had made it to Tokyo—and I was determined to safeguard my prized press pass at any cost.

Members of the Olympic press corps were able to get vaccinated early, and I received my second dose in mid-July. Even so, each morning I was required to file health reports via a smartphone app detailing information like my temperature, general condition, and whether I had been in close contact with anyone who had contracted the coronavirus. If I was busy or just forgot, an email would arrive around noon warning me about my dereliction of duty. Renewing my press credentials each day was predicated on the app confirming that I had met all the required conditions, and needless to say, I took my obligations seriously. 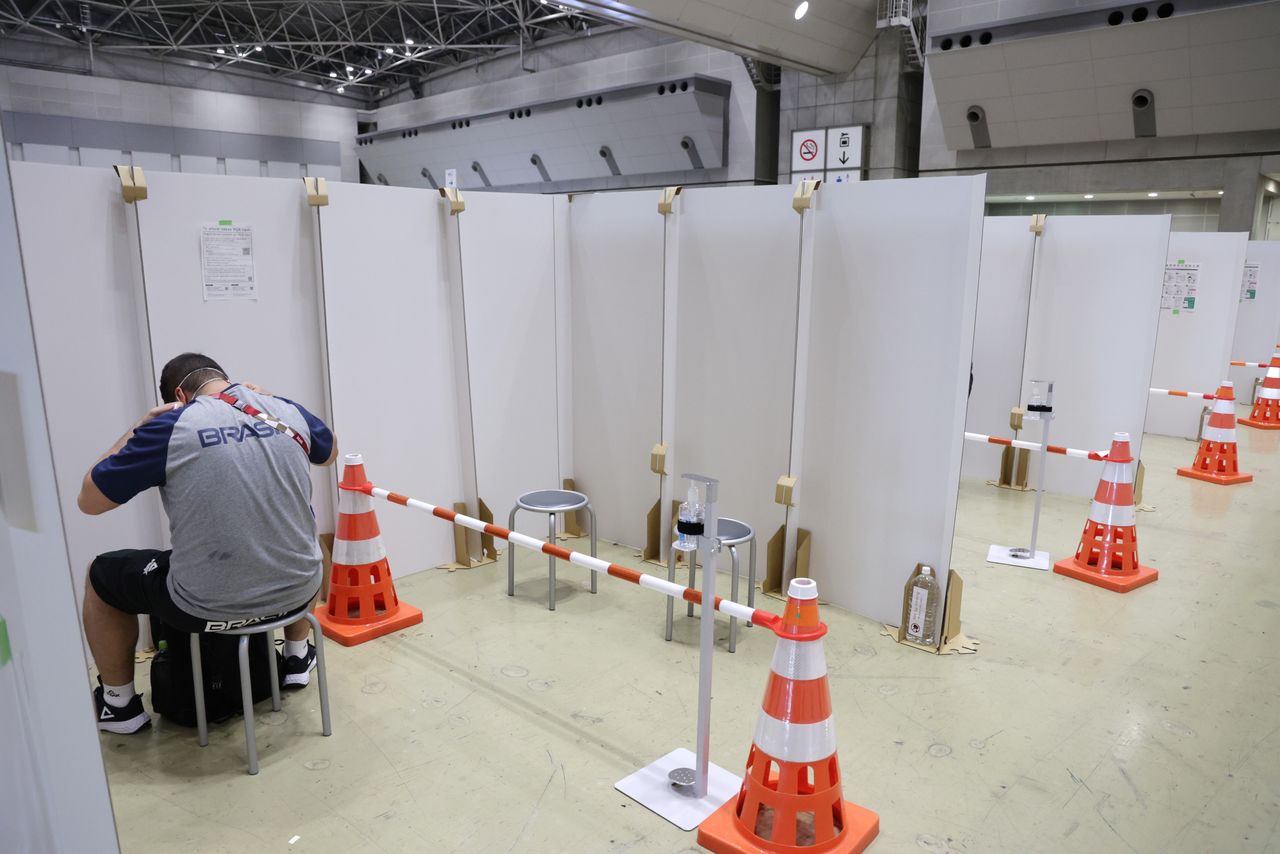 A PCR testing station at the main press center for the games, located at the Tokyo Big Sight exhibition complex. (© Jiji)

Along with these daily protocols, I also had to submit a saliva sample once every four days to test for COVID-19. This meant making a trip to Tokyo Big Sight, a sprawling exhibition venue housing the main press center for the games, to pick up a saliva collection kit at the PCR testing station there.

Although burdensome, the measures succeeded in preventing a major Covid outbreak at the Olympics. A total of 430 cases related to the games were reported from July 1, when the official measures went into effect, to the closing ceremony on August 8. The majority of these, 236 in all, were employees at subcontractors, followed by 109 games-affiliated personnel, 29 athletes, 25 members of the media, 21 volunteers, and 10 Tokyo 2020 employees. The International Olympic Committee reported that the July infection rate for the games was a mere 0.02%, a laudable achievement considering how during the same period Japan, like other countries around the world, was seeing a record surge in cases.

Measures on the Ground

The organizing committee issued “playbooks” for everyone involved in the games, outlining the rules and mitigating measures for their participation. For instance, a booking system was used to control the number of media personnel at events. Reporters wanting to cover a competition had to request access ahead of time and then present the accompanying confirmation email along with their press ID at the venue on the day. In addition, entrances were equipped with alcohol spray for disinfecting hands and thermographic cameras to check temperatures, steps that, along with the standard safety checks of bags, became part of the routine.

Masks were of course compulsory in all settings. There were reports in the Japanese media prior to the games getting underway of foreign journalists taking off their face coverings, but I never witnessed such infringements. The only instances when I saw people unmasked were in designated dining areas, but even then most individuals refrained from talking to their colleagues while they ate. 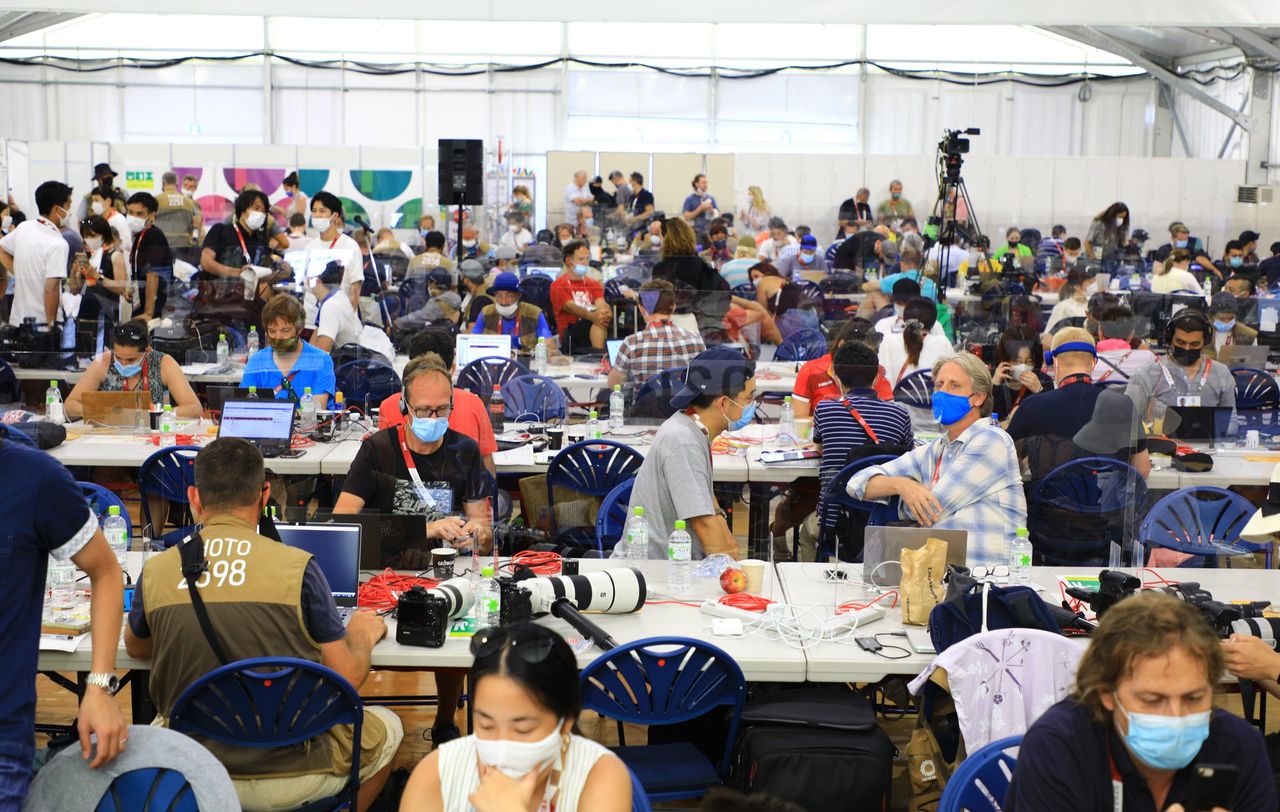 Journalists work inside the media center at the Ariake Urban Sports Park, the venue for skateboarding and BMX events. (© Jiji)

Physical distancing rules were in place in media work rooms, areas where reporters prepare for events and file stories, as well as in so-called mixed zones set up for interviewing athletes. While on the job, journalists were expected to leave a chair empty between them and the next person over, although this was not always practical. Observing distancing protocols was next to impossible in mixed zones, as individuals jostled to snap photos or pose questions to athletes. Still, it was far less crowded than at events I had attended prior to the pandemic. Athletes stood farther away than usual, but speakers connected to interview mics made it relatively easy to hear their comments. Personally, I found the measures an improvement from the normal bedlam of covering sporting competitions.

Along with distancing, people were urged to frequently sanitize their hands, and venues were well supplied with bottles of alcohol disinfectant. Sterilizing efforts were also carried out by bands of volunteers and other staff, who, in an impressive display of spritzing and cleaning, diligently wiped down any surface a person might conceivably come in contact with.

One obvious weakness in the Olympic bubble was with transportation to and from accommodations and event venues. Although there was one set of buses for athletes and team staff and another for members of the foreign media, inexplicably, Japanese journalists were allowed to use public transit, thus increasing points of contact with potential outside sources of infection. The fact that so few cases were reported suggests that sanitizing and other measures worked as intended. 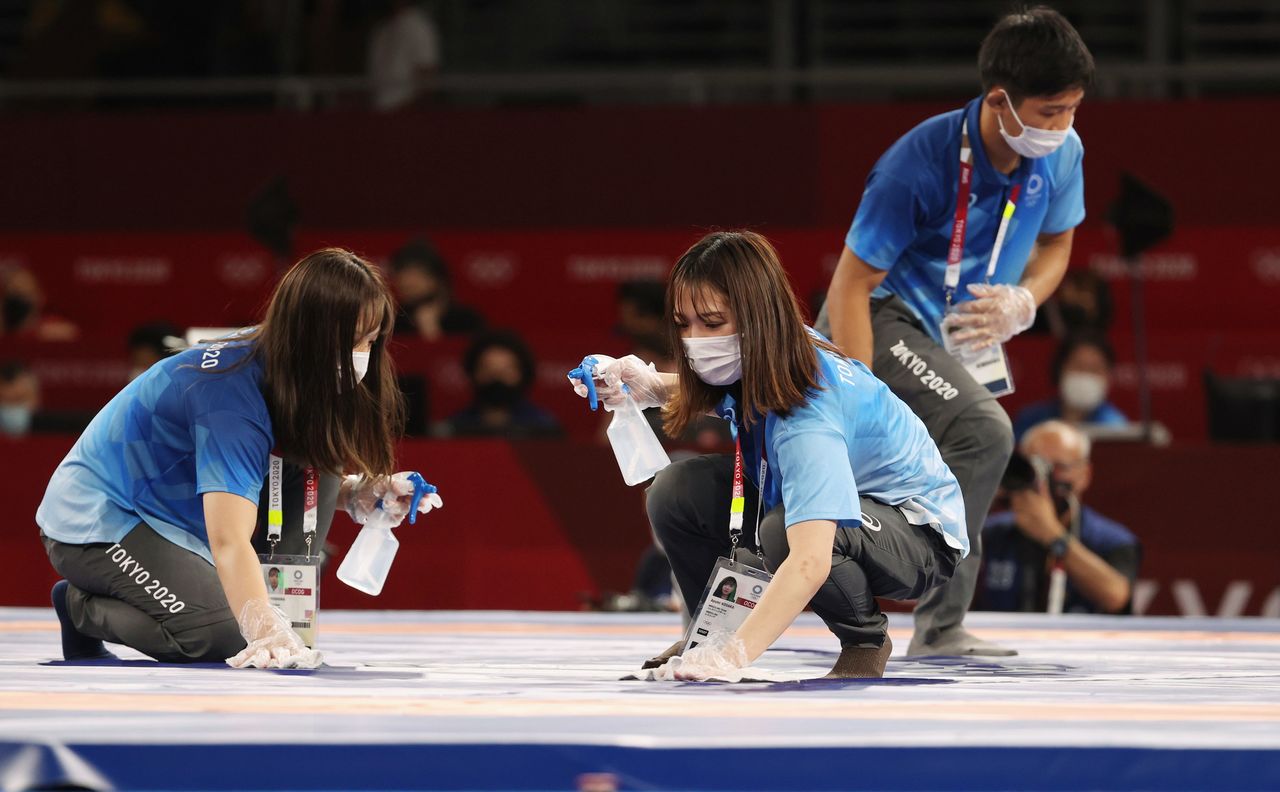 Staff sanitize a mat following a match at Makuhari Messe, where the wrestling events were held. (© Jiji)

The Olympics run on an extremely tight schedule, and to stay on top of the action and meet deadlines, reporters must eat when they can. Here I sympathized with my overseas colleagues, who because of anti-infection measures were left with few dining options. Restaurants and dining halls that were available for use often closed early, and after a long day of reporting there was usually nowhere to satiate growling bellies. Media work rooms provided a modicum of relief by offering hot and cold drinks as well as light fare like prepackaged sandwiches. Although an improvement from earlier Olympics, the lineup could not be considered filling. It is no wonder, then, that convenience stores became all the rage among foreign correspondents, as documented in countless social media posts.

Another challenge was keeping track of all the different applications that needed to be downloaded, such as the health-check app, which was just one of several portals for sharing and receiving information. One of the most unwieldy was the app for accessing simultaneous interpreting services during medalists’ press conferences. More than once I plodded through the process of launching the app, scanning the appropriate QR code, and selecting the target language, only to discover that I had missed the start of the event.

Covering an Olympics without spectators was an unusual experience. The lack of the characteristic rumble of crowded venues was partially masked by things like music pumped over sound systems, multilingual public address announcements, and even the sound of the competitors themselves. However, there were moments when the eerie hush was jarringly apparent. I felt this most acutely while covering table tennis, where between plays it grew so quiet that you could hear a pin drop.

This is not to say that the stands were completely empty, however. Members of the different Olympic teams, along with volunteers and staff members, filled some of the seats. Depending on the event and the athletes competing, this could range from a handful of people to several hundred individuals. During the women’s artistic gymnastics competition, for instance, spectators, most sporting Team USA attire, filled the stands, eager to watch American superstar Simone Biles perform on the balance beam. After she clinched the bronze, they gave her a standing ovation and then unceremoniously cleared out before the next event got underway.

The women’s basketball gold medal game between Japan and the United States likewise attracted a sizable crowd, mostly volunteers who came to watch the action taking place on the final day of the games—a small reward for their enormous effort during the events. Even with close to 1,000 people in the stands, though, physical distancing was never an issue in the sprawling arena. 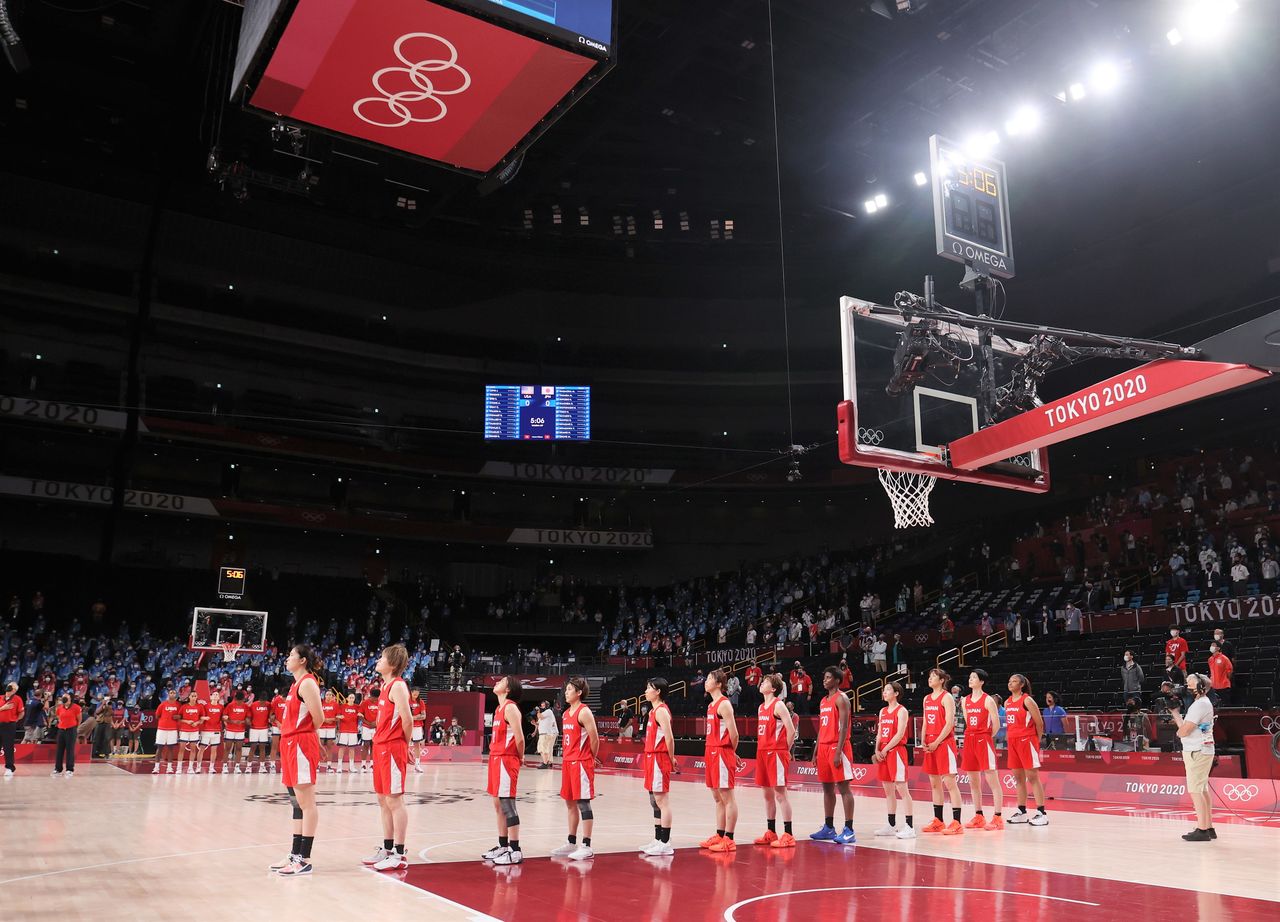 The Japanese women’s basketball team stands at attention during the opening of the final against the United States on August 8 at Saitama Super Arena. (© Jiji)

It would be an understatement to say that Tokyo 2020 started under a cloud. The atmosphere in Japan was less than celebratory, as concerns over COVID-19 eroded support for the games, and groups calling to cancel the event made the news almost daily. Once the Olympic torch was lit, though, the mood shifted perceivably. Although there were reports of large numbers of volunteers resigning, most showed up for duty, ensuring that competitions ran smoothly. The public also warmed to the spectacle, with local residents near venues coming out to welcome athletes with homemade signs. Crowds of spectators could also be seen on bridges and other areas attempting to catch a glimpse of outdoor events.

As a Japanese reporter, I felt a sense of pride at the games. The venues and surrounding areas were safe and clean, and when something essential such as a toilet broke, as is inevitable at a huge event like the Olympics, maintenance crews promptly dealt with the issue, minimizing inconvenience.

Perhaps what stood out most to me, though, was the efforts of each individual, volunteer, staff, and journalist alike, to observe the plethora of COVID protocols. It was not easy, but the combined effort is the biggest success story of the Olympics, and something everyone involved should be proud of.

(Originally published in Japanese. Banner photo: Fireworks blaze above the National Stadium in Tokyo during the Olympic closing ceremony on August 8, 2021. © Jiji.)