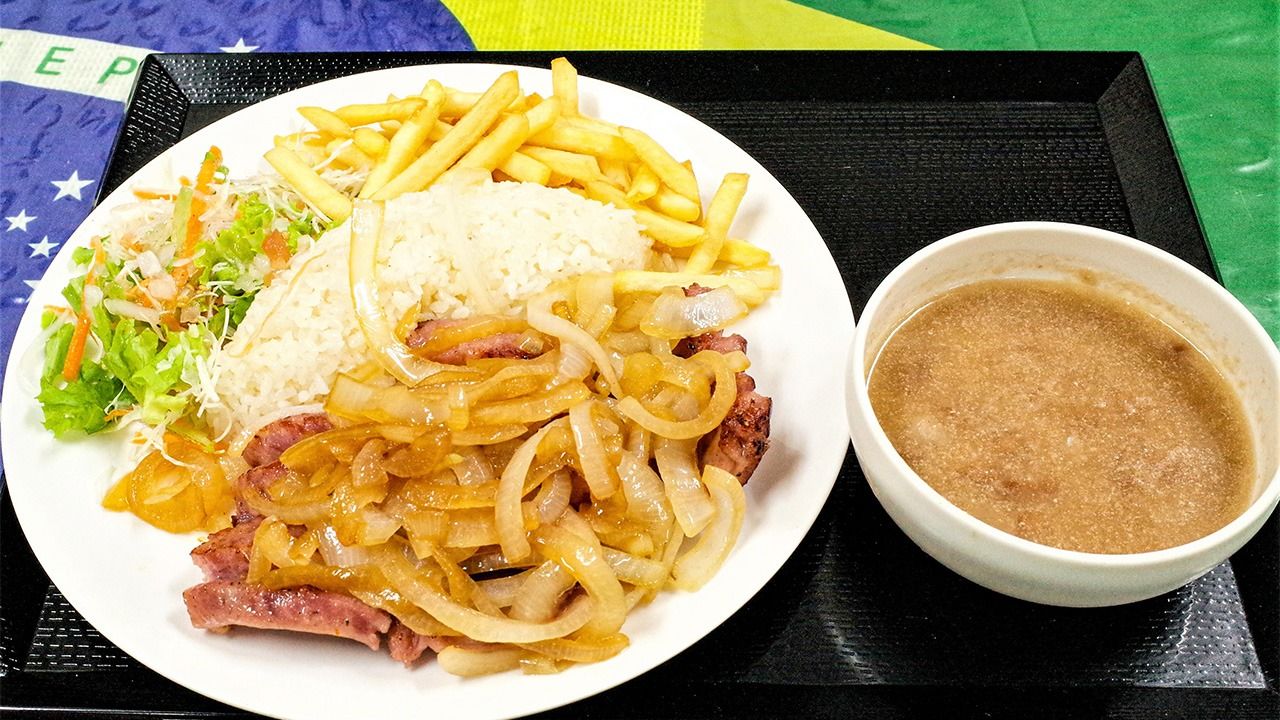 Society Food and Drink Nov 9, 2021
Tsurumi, Yokohama, is home to a shopping street where the cultures of South America and Okinawa mix. Brazilian restaurant Yuri Shop, one of the livelier spots there, offers a short lesson about the ties binding Okinawa, Brazil, and Tsurumi, as well as a short history of Japanese emigration.

Tsurumi, in eastern Yokohama, is the kind of place that makes the casual visitors feel unsure of just what country they might be in.

A 20-minute walk from the JR or Keikyū Tsurumi Station across the Tsurumi River toward the coastline brings you to the Nakadōri shopping district. This lively area is lined with Okinawan restaurants and Korean yakiniku barbeque shops, with a healthy mix of places serving Brazilian and Bolivian cuisine. The heady mix can seem almost chaotic. 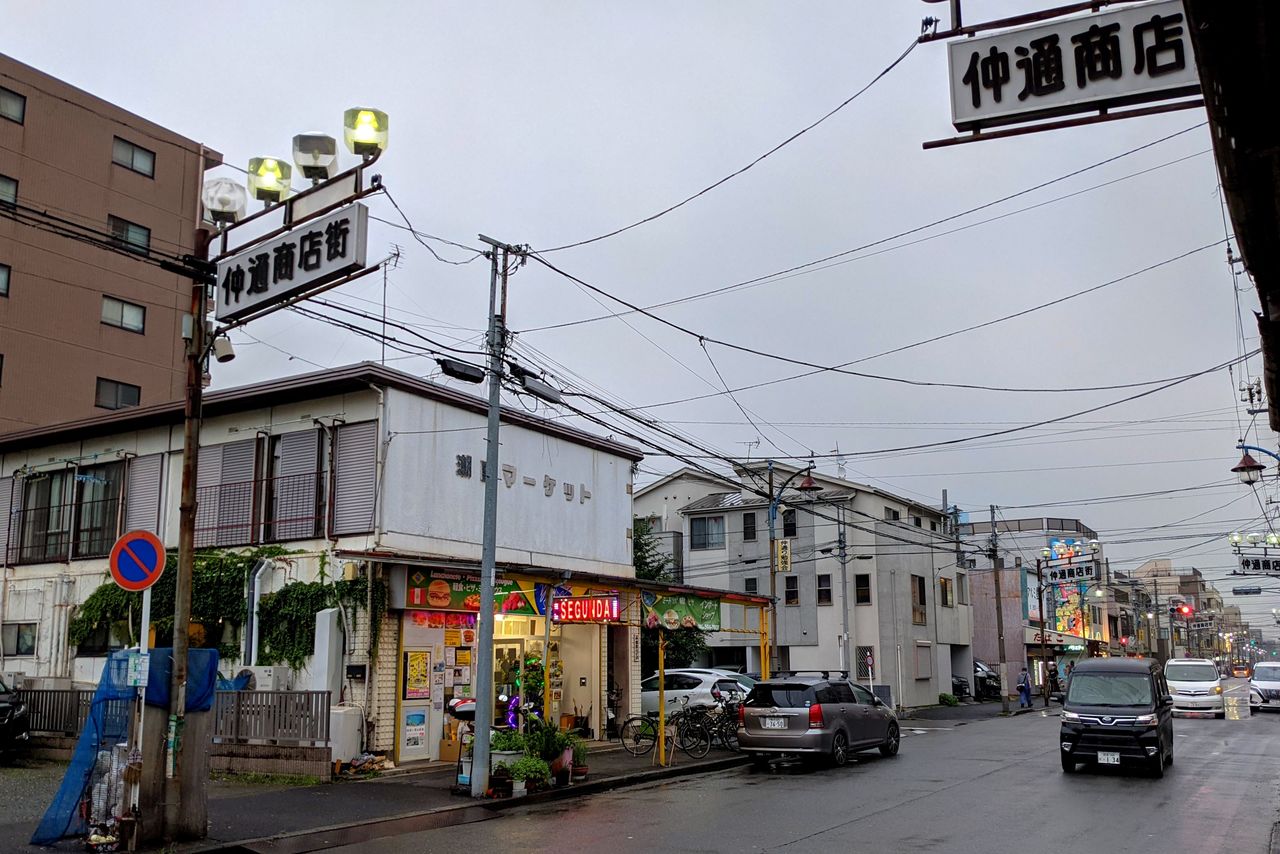 Nakadōri at sunset. In addition to Brazilian restaurants like Yuri Shop, there are Bolivian and Okinawan shops.

I visited around dinner time, and my curiosity was piqued by a large shop with a Brazilian flag on the sign outside. That was my first encounter with Yuri Shop. Inside, I discovered more than just good food. The owner, Kohashikawa Yuri, shared her story.

Kohashikawa was born to Japanese immigrants and grew up in Brazil’s sprawling capital of São Paulo. She came to Japan in 1989 to earn a living.

That was right in the middle of Japan’s booming “bubble economy,” and she had no trouble finding work. ”I started out at a snack factory in Gunma Prefecture. Then, I worked quite a bit at car factories in Shizuoka Prefecture and Yokohama.”

She brought her parents and children over from Brazil once she got used to life in Japan. However, she was working without rest. On weekdays, she worked at factories, and on weekends she took on part-time jobs around Tsurumi.

Tsurumi was a comfortable place for Kohashikawa, as it was already home to a large community of people with South American roots, including Brazil. Then, she was given a small shop she had used to frequent, and so decided to open her own restaurant.

“The shop’s name was Lojinha Yuri. We sold Brazilian imports, and we had a lot of customers,” she says. Lojinha means “small shop” in Portuguese.

Kohashikawa had always enjoyed sales, and she put plenty of effort into growing her business. Her success in 2000 let her move to a two-story building, where she continued to expand her business. The first floor held a shop selling groceries and housewares, while she started a video rental shop targeting Brazilian and Peruvian customers on the second floor. Eventually, she added clothing to her wares.

In November 2015, Kohashikawa moved for the fourth time and opened the current Yuri Shop. The spacious interior houses aisles of Brazilian groceries and housewares in the front half and a diner in back. 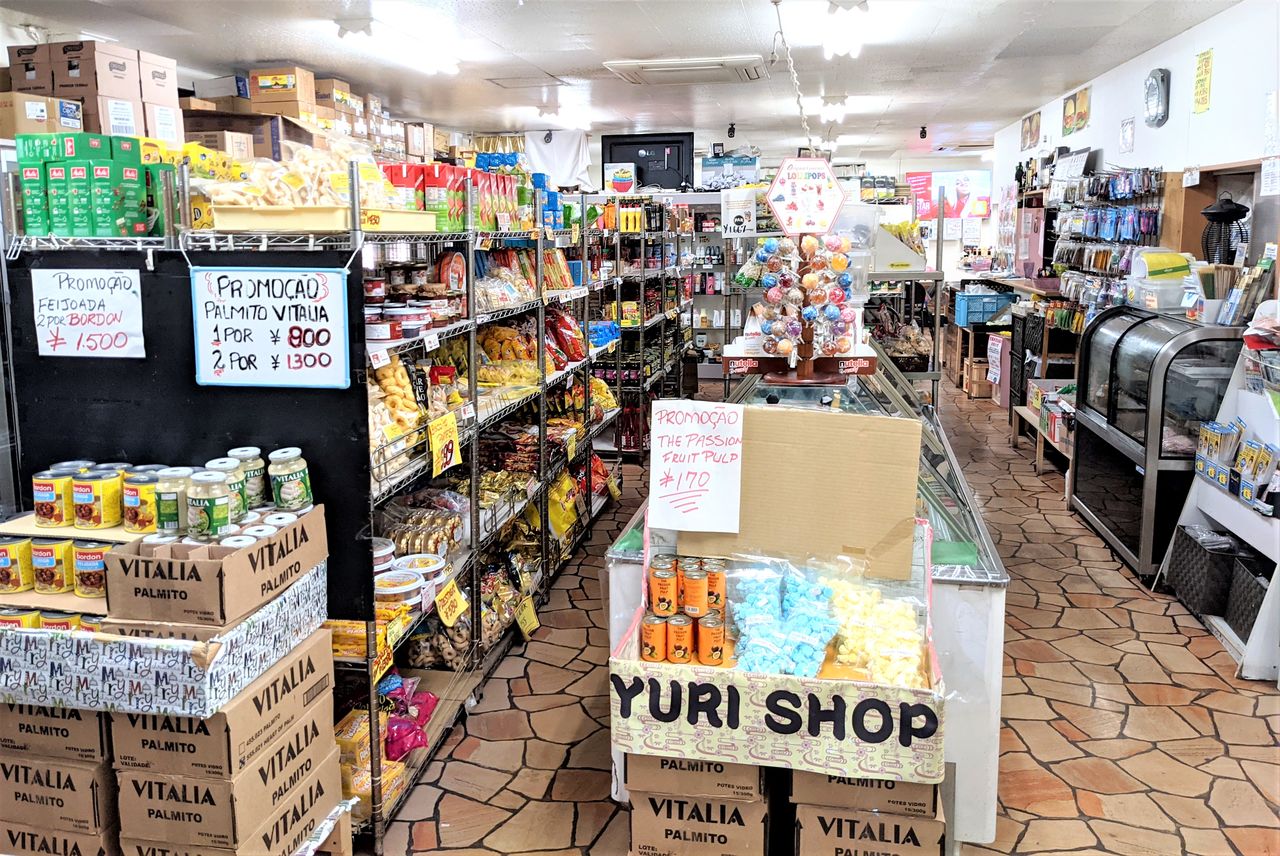 The shop shelves are filled with goods of all kinds, from groceries to daily necessities. There is a dining space in the back.

Business has grown steadily in the thirty-odd years since her arrival in Japan, Kohashikawa has withstood shock after shock in those decades.

In the early 1990s, Japan’s “bubble” burst and ushered in the lost decades of economic stagnation, and then in 2008 the global economic crisis hit. She was also present for the Great East Japan Earthquake of March 2011. The earthquake was particularly devastating, and many of her South American friends, unable to bear the aftershocks, returned to their homelands.  But Kohashikawa remained in Tsurumi.

“If you ask me why, well, back in Brazil there may not be any danger from earthquakes, but there are muggings. I’m more afraid of muggers than of earthquakes. So, I’m staying in Japan.”

The Kohashikawa family has also established deep roots in Tsurumi. The children she brought over from Brazil have finished their Japanese education, started working, and had three children of their own. These grandchildren are Yuri’s greatest love.

The COVID-19 pandemic has also been hard, hitting the restaurant industry in particular, and adding another source of stress. But she still is not considering returning to Brazil. Brazil, along with the United States and India, is a hotspot for the pandemic, which further contributes to her worries about safety there.  But above all, if Yuri Shop closes, it is her community that will suffer.

Yuri Shop in the evening is packed with Brazilian residents on the way home after work, and the sounds of Brazilian Portuguese and laughter fill the space. This shop is an important place for respite and communication for the community, but most important of all is the taste of home they can find nowhere else.

Everything served at Yuri Shop comes in a “one-plate” meal, with meat, rice, and vegetables piled high together on a single plate. The Brazilian style is to top this with feijão, a savory bean soup, and mix it all together. 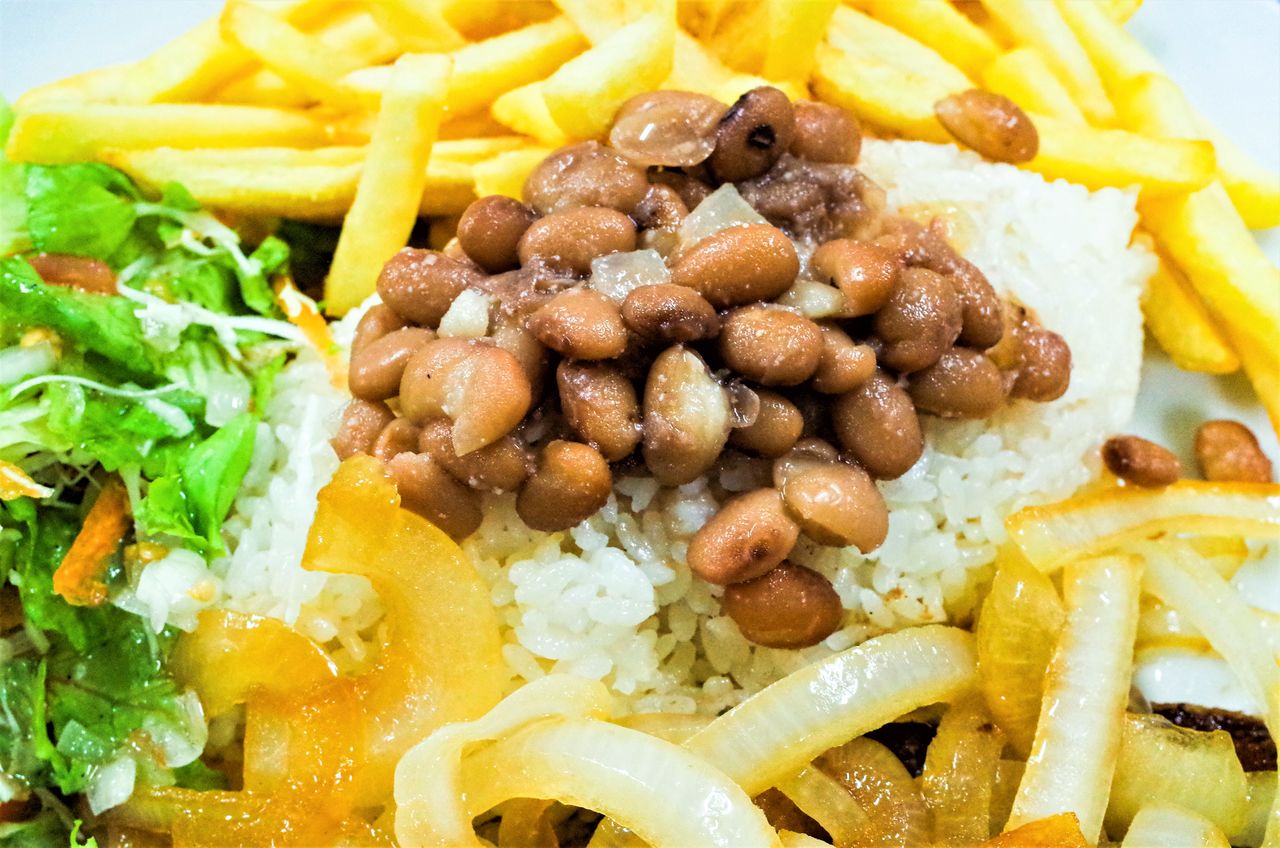 The rice is topped with feijão, and Brazilian home style is to mix everything together.

I ordered the popular beefsteak with onions. The perfect savories of the feijão matched the sweet and spicy onions perfectly, and I could hardly put down my fork.

“Ah, that was great!” I said when Kohashikawa came to clear the table. She looked pleased to see my plate so clean.

“I pickle the onions with soy sauce and garlic. It’s a Japanese flavor I grew up eating back in São Paulo,” she explained. The customers here are not just Japanese-Brazilians, but Japanese fans of Brazil, as well. That they would be fans of this food is not at all surprising given these familiar notes to the cuisine.

The Kohashikawa family history is a fascinating one, and is linked to Tsurumi’s diversity. The Japanese side of the family has roots in Nishihara, Okinawa. Yuri’s grandfather emigrated from Okinawa to Brazil in 1935. Her father was only four months old when he crossed the sea. He would go on to work on a ranch, as a truck driver, and as a taxi driver, in addition to raising four children.

The family lived in a place called Vila Carrão, in western São Paulo. The area is home to a large community of Okinawan immigrants, and people there still celebrate Okinawan festivals, carrying on the old songs and dances.

At those festivals, the Kohashikawa family would set up a stall selling Brazilian pastries called pastel, a deep-fried pastry pocket made from wheat dough filled with ground meat, cheese, or other fillings. The family’s version was always a hit, and naturally, Yuri Shop offers these tastes of home. 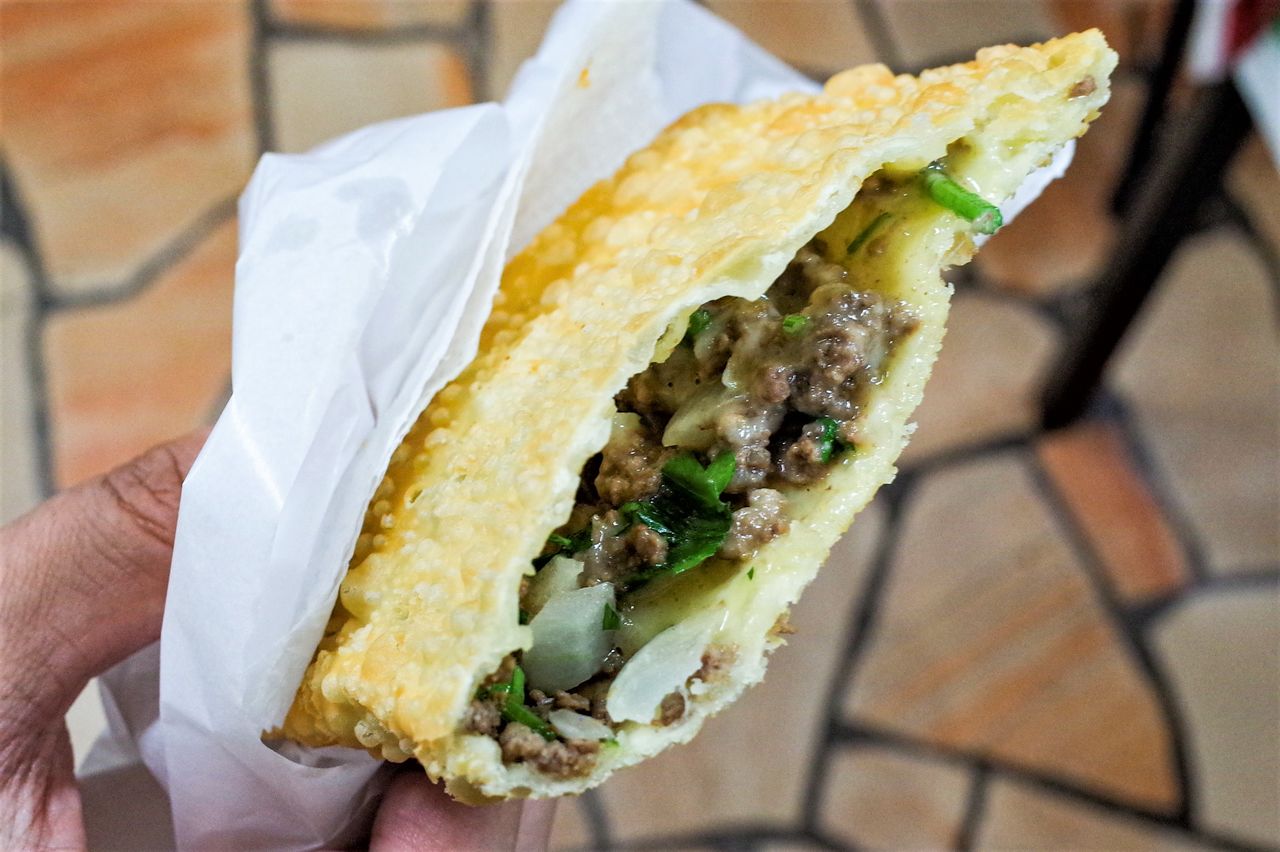 The pastel de carne (meat pastel), just ¥300, at Yuri Shop uses the same recipe as the Kohashikawa family sold at their festival stall in Brazil.

Kohashikawa looks wistful as she thinks back. “When I was growing up in Brazil, I only spoke Portuguese. I could barely speak any Japanese. I guess the Japanese my parents used was the Okinawan dialect, because that’s what my grandparents spoke at home.” She says that people in Vila Carrão still speak an Okinawan dialect you can hardly find even on Japan’s southern islands these days.

Okinawan culture lives on in many places in South America, not just in Vila Carrão. One of the most interesting examples is near Bolivia’s second largest city, Santa Cruz, in a place called Colonia Okinawa. As the name would imply, it is a village cleared from the forest and settled by Okinawan immigrants.

Life in the forest was a constant battle with hunger, disease, and flooding, and many of the early settlers left for easier times in Brazil or Argentina, despite the land they had already received. She says that some of those who left Colonia Okinawa ended up with their fellow Okinawans in Vila Carrão.

While many Okinawans left Japan for Brazil or Bolivia, others came to Tsurumi before World War II to work in the recently created Keihin Industrial Zone, along with workers from the Korean Peninsula.

Immigrants from South America started to come in the 1980s. The booming bubble economy created a labor shortage, and to fill the gap the Japanese government eased restrictions for immigrants with Japanese ancestry. Kohashikawa Yuri was one of those who took advantage.

Now, Tsurumi is home to people with direct roots in Okinawa, as well as those who came by way of South America. The population of South American immigrant families peaked in 2007; even today, though, it stands at around 1,600 people. 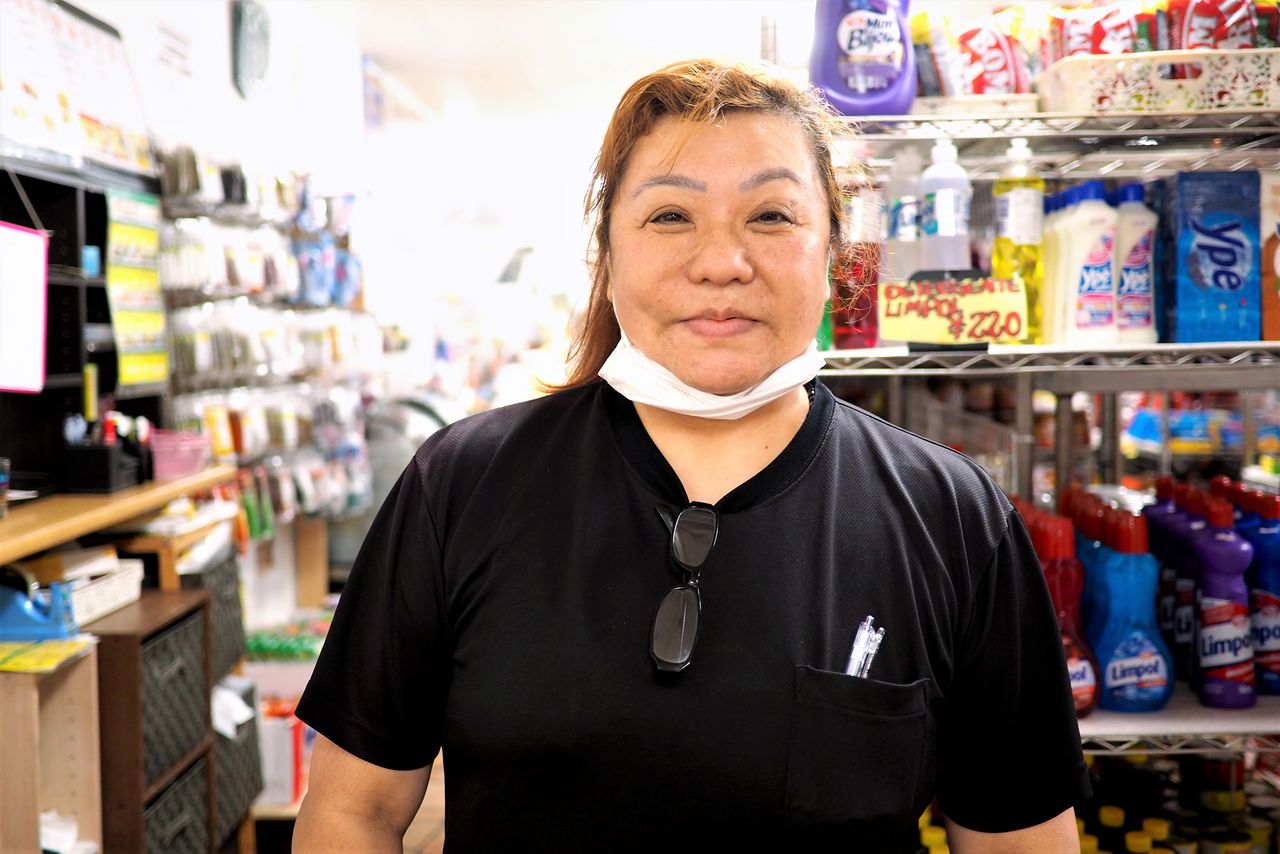 Kohashikawa Yuri is now in her thirty-second year in Japan. “I’m still not great at Japanese,” she says, but she had no problems with this interview.

Immigrant Support with a Tsurumi Touch

Tsurumi has one job that is particularly popular with South American immigrants: electrician. When Okinawan electrical equipment contractors began hiring workers from South America in the 1980s, word spread among Japanese-Brazilians in Vila Carrão that Tsurumi was a good place to find work, with jobs alongside others from Brazil. From then on, electrical work became a common career path for those immigrating from Brazil or Bolivia to Tsurumi. Yuri’s own son is an electrician.

ABC Japan is an organization in Tsurumi that offers support to those in need, particularly immigrants. It dispenses financial aid to restaurants hit by the COVID-19 pandemic, for example. One of its many initiatives is offering courses to prepare people to take Japan’s Class 2 Licensed Electrician exam.

“Since you need government certification to do certain electrician jobs, having that certificate can make a huge career difference,” says Watanabe Yumiko, who works with ABC Japan. “But the exam is extremely difficult, and the passing rate is only 40 percent. It’s a huge barrier for South American immigrants for whom Japanese is not the native language. So, we decided to start offering a class to help them get certified. Even then, the test would be too difficult written only in kanji, so we started pushing to have furigana reading put over the kanji.”

Their efforts have been successful, much to the delight of their South American students. ABC’s support goes beyond just work, though. The organization also holds regional events to create opportunities for community interaction with the Okinawan and South American population.

The Okinawa Bussan Center in the Nakadōri district is a shop filled with Okinawan goods, and the same building holds the Okinawa Kaikan community center, which offers Okinawan culture classes teaching things like eisa and other dances, or the sanshin (a three-stringed musical instrument sometimes called the Okinawan banjo). She says many of their students have South American roots.

“Oh, right, right,” says Yuri, with a smile. “My grandson plays the sanshin!”

People born in Okinawa went to Brazil and Bolivia. After long years, and multiple generations, they have returned to Japan and settled in this new home of Tsurumi. This has brought a new burst of color to a town already filled with vibrant diversity, as well as a little change to society as a whole. Yuri Shop might look a little chaotic at first glance, but it is actually a stable, familiar place for people to touch base with their roots—a spiritual home for people who have struck out on a new life, and brought new culture to their ancestral homeland. 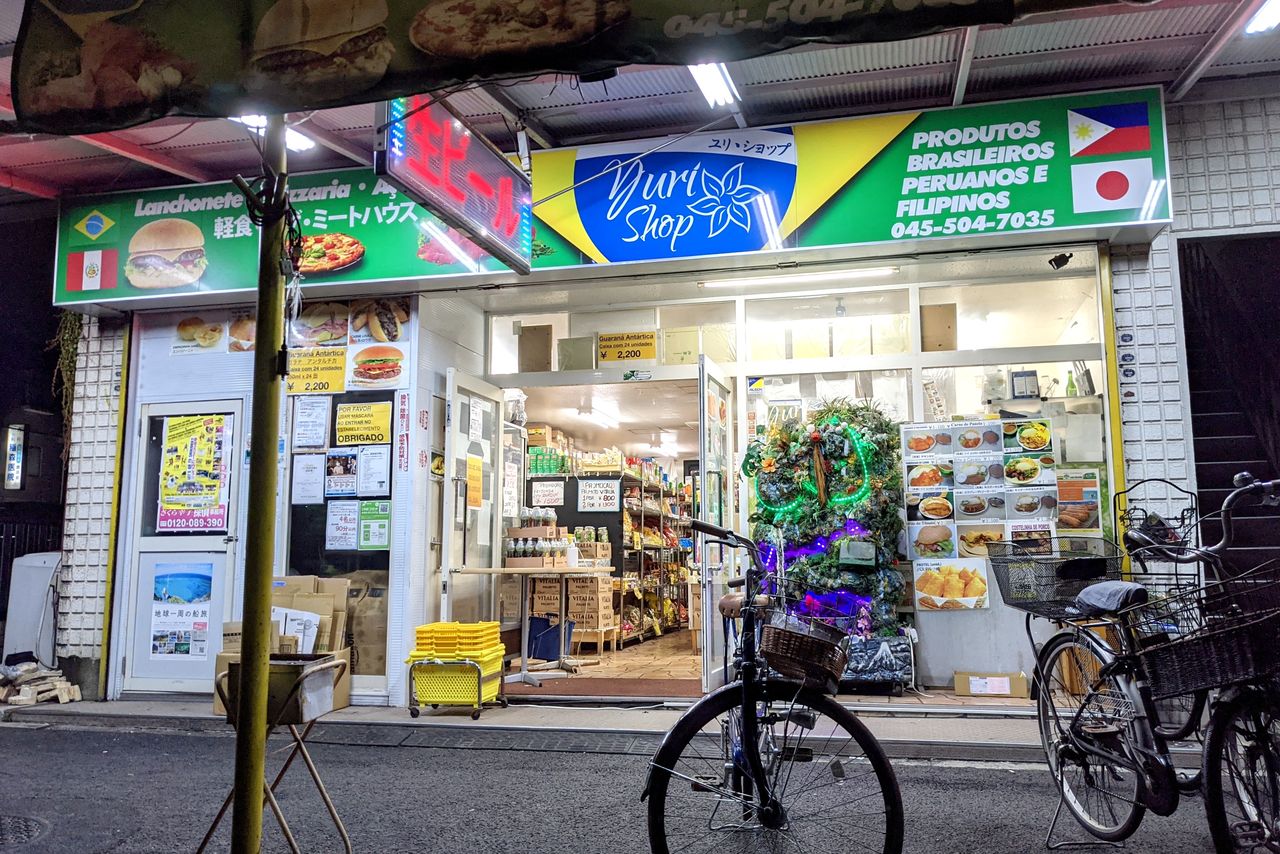 (Originally published in Japanese: Banner photo: Yuri Shop’s most popular dish, beefsteak with onions, ¥1,200. The soy sauce based makes it familiar to those born in Japan. All photos © Fuchi Takayuki.)