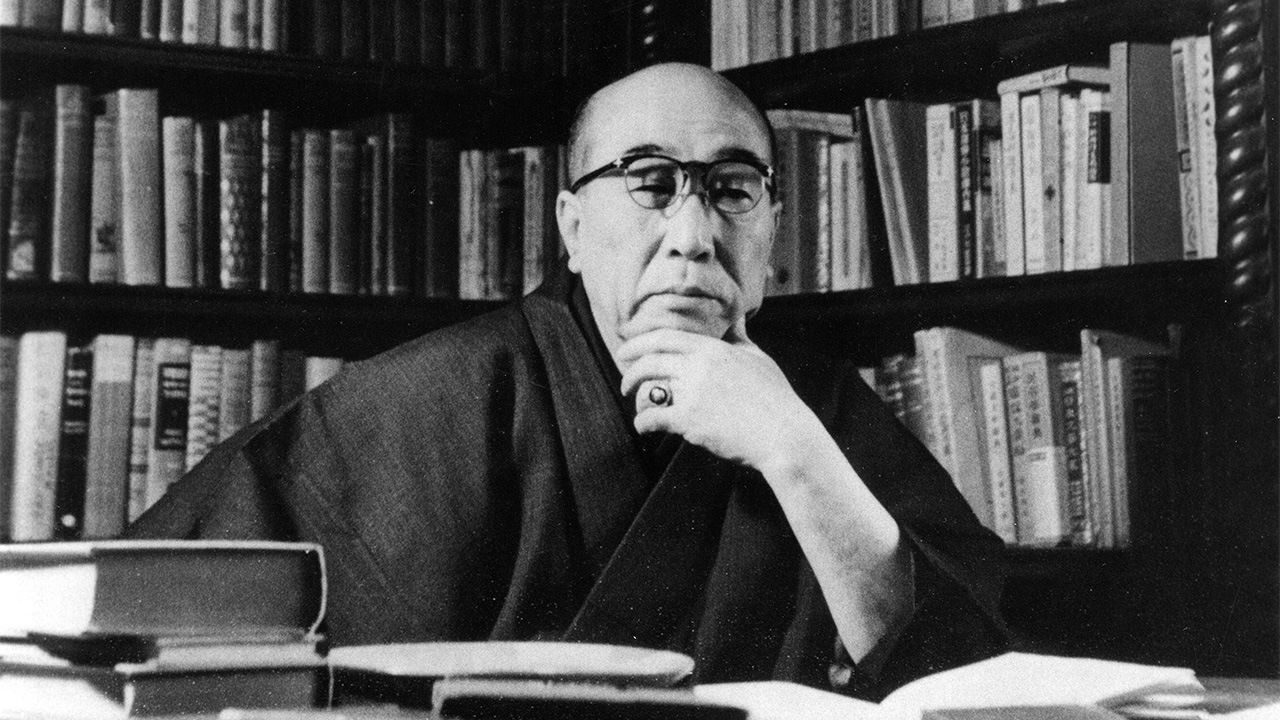 Culture Society Entertainment Oct 28, 2021
Japanese mystery fiction would not be the same without Edogawa Ranpo, whose stories continue to be hugely influential in the world of books, as well as being adapted to film, television, manga, and anime. Literary specialist Ishikawa Takumi examines the achievements and works of this unconventional writer. 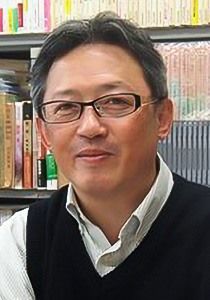 Over the past few years, there has been growing overseas interest in Japan’s classic honkaku mysteries, including works like Yokomizo Seishi’s Honjin satsujin jiken (published in Japanese in 1947 and in an English translation by Louise Heal Kawai as The Honjin Murders in 2019). A Guardian article suggested the first story in the genre was Edogawa Ranpo’s debut, a code-cracking tale called “Nisen dōka” (trans. “The Two-Sen Copper Coin”).

In the honkaku genre, key information is meticulously revealed to readers and there is a logical explanation for who the culprit is. “These detective stories are structured to basically preserve a fair relationship between the reader and writer,” explains Ishikawa Takumi, a literature professor at Rikkyō University. “Ranpo thought he wanted to write honkaku mysteries, but really only his early stories like “The Two-Sen Copper Coin” and “Shinri shiken” [trans. “The Psychological Test”] can be said to fit into the genre. He tried to write honkaku stories, but they brought him no success.”

Yokomizo was eight years younger than Ranpo and supported his work as an editor before World War II. Shortly after the end of the conflict, he rose to fame through The Honjin Murders, a locked-room mystery featuring the great detective Kindaichi Kōsuke. After this, he published many novels about serial murderers, which often drew on traditional customs and legends.

The older writer, however, struggled with the long form. “Ranpo regularly hit a dead end while working on his novels, got fed up, and abandoned them,” Ishikawa says. So where does Ranpo’s true value lie?

Born as Hirai Tarō in Mie Prefecture in October 1894 and raised in Nagoya, Ranpo came to enjoy adaptations and abridged translations of English-language detective stories through writers like Kuroiwa Ruikō. In 1912, he went to Tokyo, where he studied in the school of political science and economics at Waseda University. While a student, he became engrossed in mysteries from Edgar Allan Poe (the inspiration for his penname), Arthur Conan Doyle, and others, which he read in the original English.

“Modern Japanese literature begins with the translation of works from English into Japanese, and this is the same for the mystery genre,” Ishikawa says. “Alongside adaptations and abridged translations, writers like Okamoto Kidō and Nomura Kodō produced their own ‘casebooks’ of mystery stories set in the Edo period [1603–1868]. Literary authors including Izumi Kyōka, Ozaki Kōyō, Akutagawa Ryūnosuke, and Tanizaki Jun’ichirō wrote works influenced by the genre, firing up the young Ranpo before his debut, but mystery books were generally seen as disposable in the literary world. I think that Ranpo disparaged his own stories as being for popular tastes, while possessed of the conviction that they were not inferior to literary fiction.” 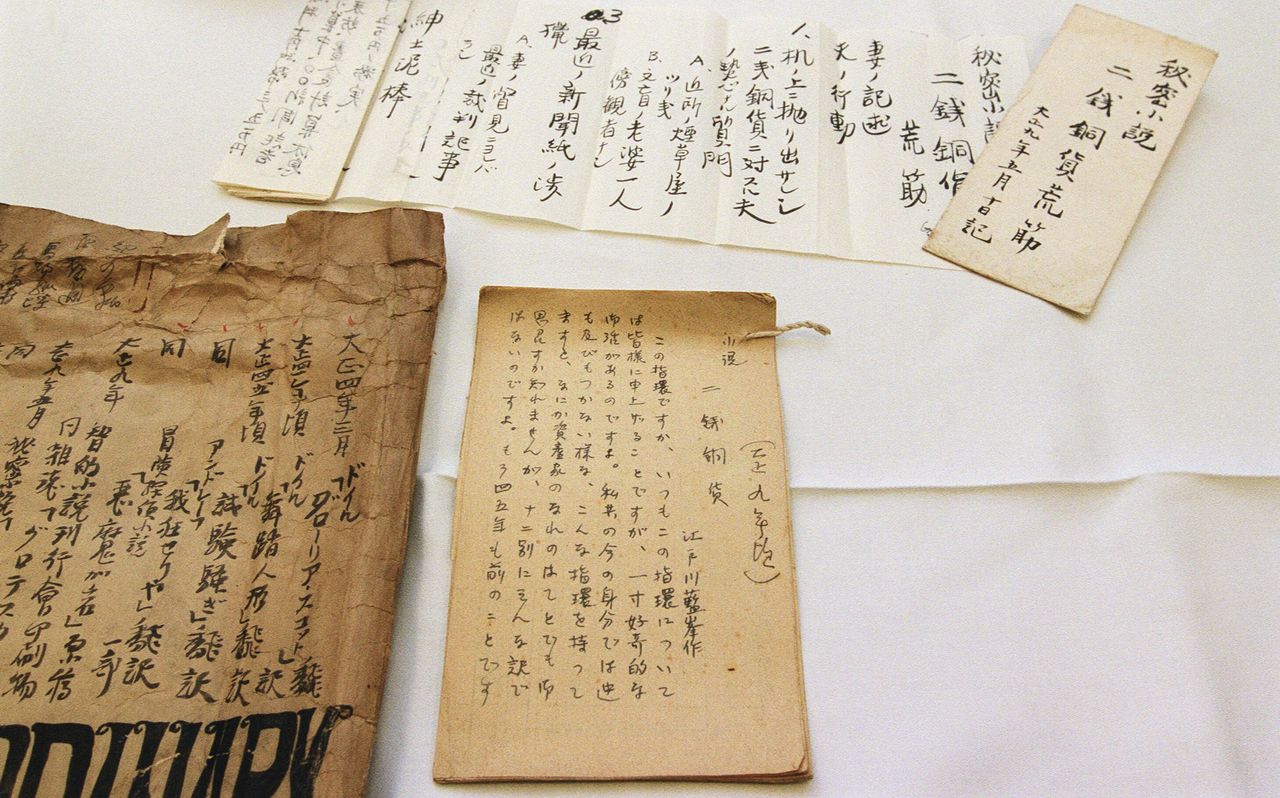 Materials by Edogawa Ranpo, including the manuscript for “The Two-Sen Copper Coin,” at Rikkyō University in Tokyo. (© Jiji)

“In ten years of energetic activity before the war, the most brilliant aspects of his literary nature came to the fore,” Ishikawa comments. “Ranpo became an author when Freudianism and other forms of psychoanalysis were entering Japan. Influenced by a science that scrutinized human mentality, he took people’s dark side and their desires and fears as material for his writing.

“In particular, he wrote effectively about when and how people feel unease and terror. The fear he excited was always human in origin. There were no monsters as in Frankenstein or supernatural phenomena like ghosts. It was a world in which humans were the most terrifying thing.”

In 1930, he published the novel Kotō no oni (The Demon of the Lonely Isle), which had a motif of male homosexual love. His 1934 book Kuro tokage (trans. by Ian Hughes as The Black Lizard) was later adapted into a play by Mishima Yukio that has been staged until the present day. In this story of hidden treasure, detective Akechi Kogorō faces off against the eponymous Black Lizard, a “female” thief.

However, as Ishikawa explains, “The original story is written in a particular style whereby it’s impossible to state conclusively that the Black Lizard is a woman. In today’s terms, one could see the character as transgender. In Ranpo’s works, there are also physically ‘freakish’ characters, but I take this as coming from his interest in depicting people whose inner selves diverge from their bodies, rather than from prejudice or discrimination.”

From around 1935, Ranpo’s ideas dried up, and he practically stopped writing fiction. His 1929 story “Imomushi” (trans. “The Caterpillar”), about a man who loses all four of his limbs in battle, was banned in 1939 by wartime censors. After this, he could not get his stories published. At the same time, he is known to have written essays for a navy-affiliated magazine that had no prior censorship. In a 1942 article “Etajima ki” (An Account of Etajima), about a visit to a naval academy, there is a moving scene in which “rosy-cheeked,” “lovely” youths tearfully embrace their graduating seniors.

“Ranpo had a predilection for the faint feelings of love between boys,” Ishikawa says. “He was greatly touched by seeing them in that time of tension, when tomorrow they might die, and seems to have freely expressed his own tastes.”

Detective fiction revived after the war, having been suppressed during the conflict as corrupting public morals. Ranpo’s serialized 1936 novel Kaijin nijū mensō (trans. by Dan Luffey as The Fiend with Twenty Faces) had teamed up Akechi Kogorō with his protégé, the young Kobayashi Yoshio. It became hugely popular, followed by other adventures featuring Kobayashi and his Boys Detective Club. In the postwar era, Ranpo resumed the series with Seidō no majin (trans. by Eugene Woodbury as The Bronze Devil), serialized from 1949, and the series continued until 1962, with radio, television, and film adaptations appearing. 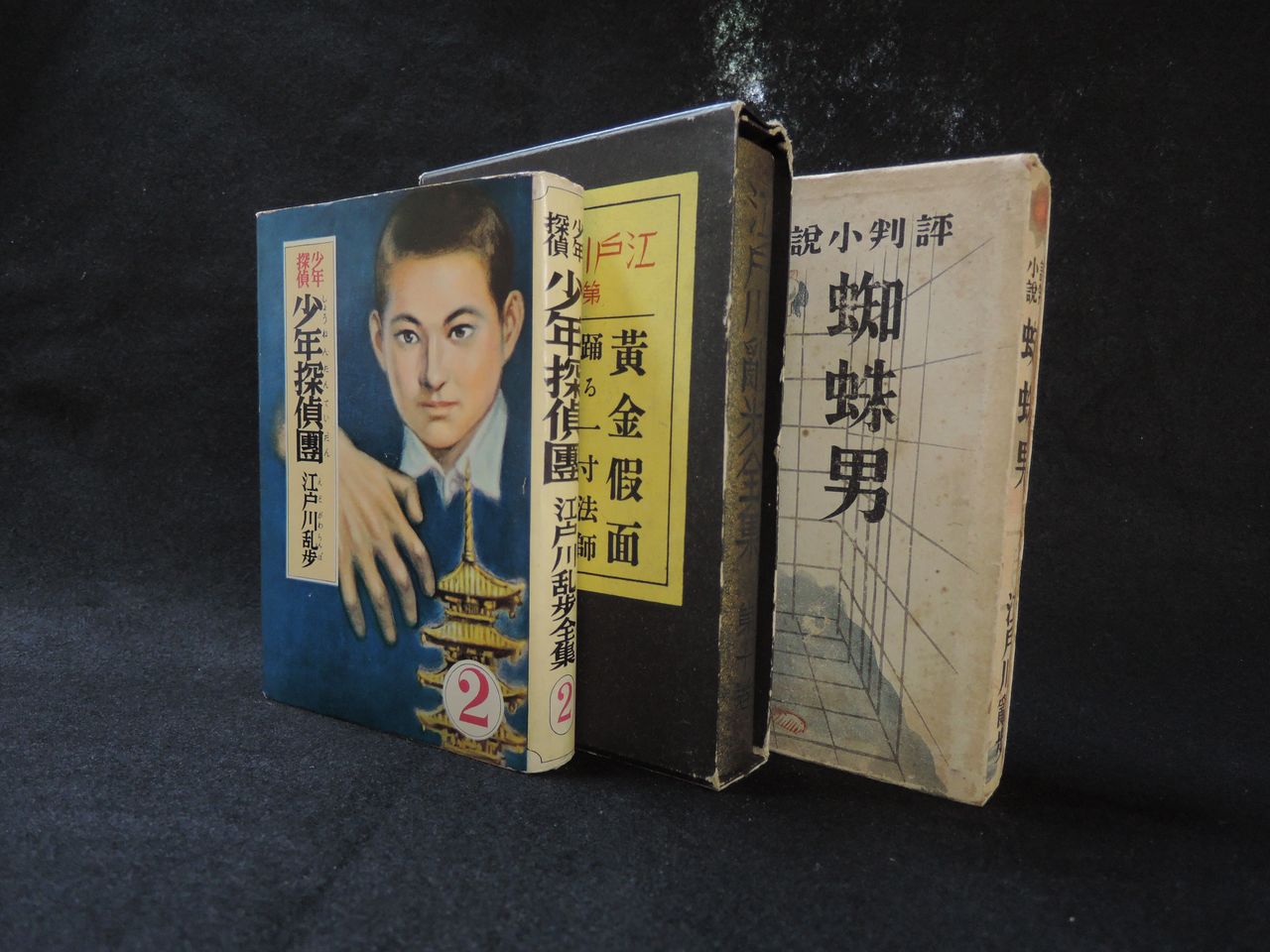 Ranpo’s Shōnen tanteidan (trans. by Gavin Frew as The Boy Detectives Club), at left, and other works.

In early stories like “D-zaka no satsujin jiken” (trans. “The Case of the Murder on D. Hill”) and “The Psychological Test,” Akechi is unpolished and immature, but this image changes in later works. By the time of the Boy Detectives Club, he has an urban sophistication, and there are car chases and other colorful action scenes. The overwhelming appeal of the series derives, however, from the villainous “fiend with twenty faces.”

“There’s a kind of philosophy of evil in his not killing or shedding blood,” Ishikawa says. “The author was also clearly more enthusiastic about portraying the title character in The Black Lizard. Rather than acting as protagonist, Akechi might be said to be there to let villainy shine.”

Ishikawa notes that Ranpo made major contributions to the mystery genre in postwar Japan, even after he stopped writing fiction for adults.

“Ranpo’s most important activity was in uncovering and nurturing young talent through editorial work at detective fiction magazines like Hōseki. The survival of his home in Ikebukuro, Tokyo, through the wartime firebombing was a great stroke of fortune. His collection became a source of ‘textbooks’ for the postwar mystery scene, as authors gathered at his home to borrow books and discuss them. This led to the founding of the Detective Fiction Writers Club, today the Mystery Writers of Japan.” 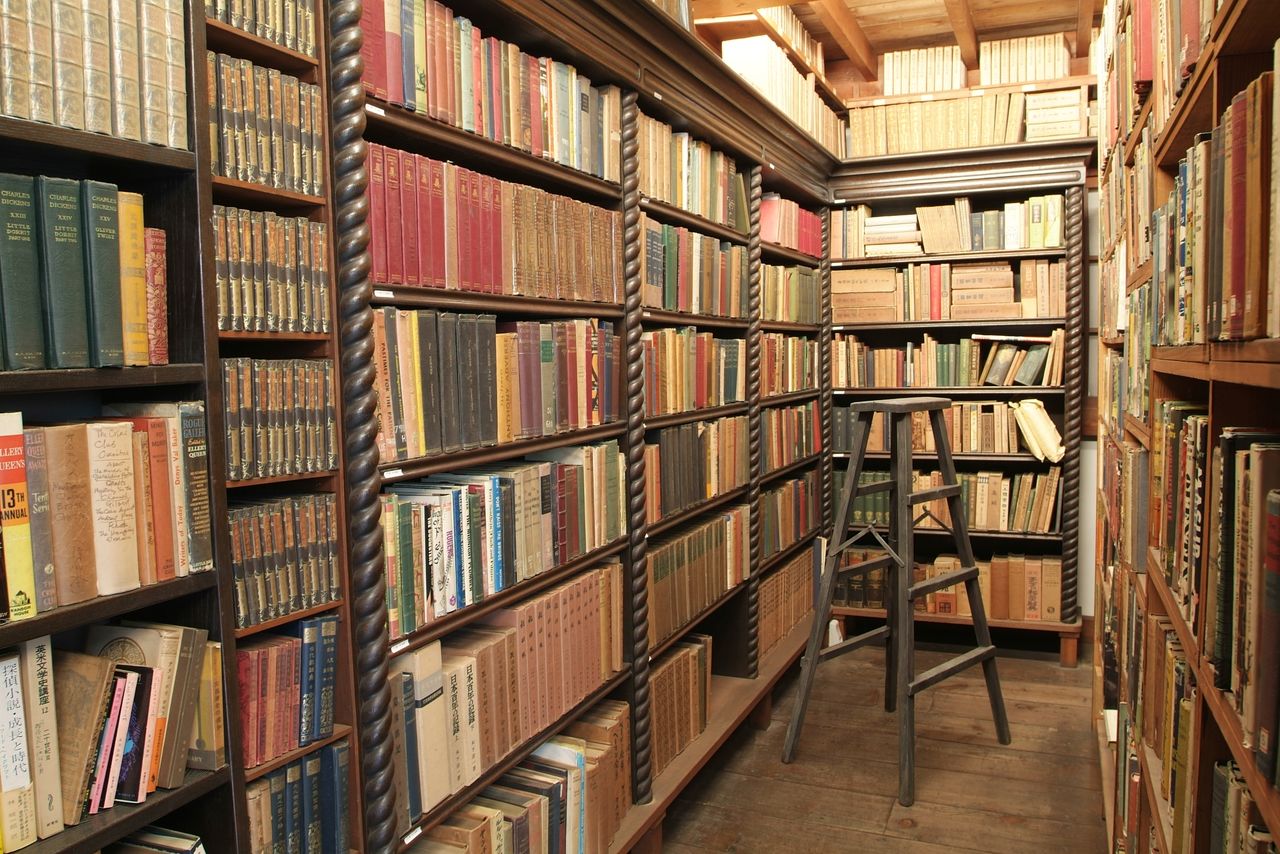 In a 1947 essay, Ranpo wrote of how he thought that detective fiction needed a Bashō to transform the genre and raise its literary standing, as the poet had refined the haikai form. He later lavished praise on Matsumoto Seichō’s Ten to sen (trans. by Makiko Yamamoto and Paul C. Blum as Points and Lines), published in 1958, saying that Seichō was indeed “a Bashō.” When the magazine in which Seichō’s Zero no shōten (Zero Focus) was being serialized folded, the story restarted serialization at Hōseki, where Ranpo was chief editor.

While Seichō respected Ranpo, Ishikawa explains that he thought that motive was important when writing about crimes, rather than clever tricks, and was insistent that his novels were not detective (tantei) fiction, but “deduction” (suiri) fiction. Nevertheless, notes Ishikawa, he used Ranpo’s influence to boost his own standing as a writer.

A Creator in the “Media Mix”

“Ranpo had a strong attachment to paper and printed materials, and he saved all kinds of papers, from letters to records of purchases from secondhand bookstores. There are some 40,000 of these items, and even more if you include handwritten memos and so on. As work on ordering and analyzing these materials continues, there are bound to be many valuable discoveries. For example, Ranpo worked together with the police, assisting with the investigation in the 1948 Teigin Incident, when twelve bank workers were killed by poisoning and cash and stamps were stolen. If we can find Ranpo’s records of the time, we might learn something new.”

There is also fresh international interest, as Ishikawa describes.

“Previously, Ranpo was often regarded as an imitator of Conan Doyle and other English-language mystery writers. Now more younger researchers are noticing other aspects of his work. Many of them are fascinated by subcultures, seeing video games, anime, and manga as original Japanese culture. Ranpo seems to be viewed as an author who had subcultural elements. After the war, his works were regularly made into movies and TV shows, but in today’s ‘media mix’ age, adaptations into manga, anime, and other various forms are even more common. Ranpo will undoubtedly remain popular as a writer and creator of original content for reworking in other forms.”