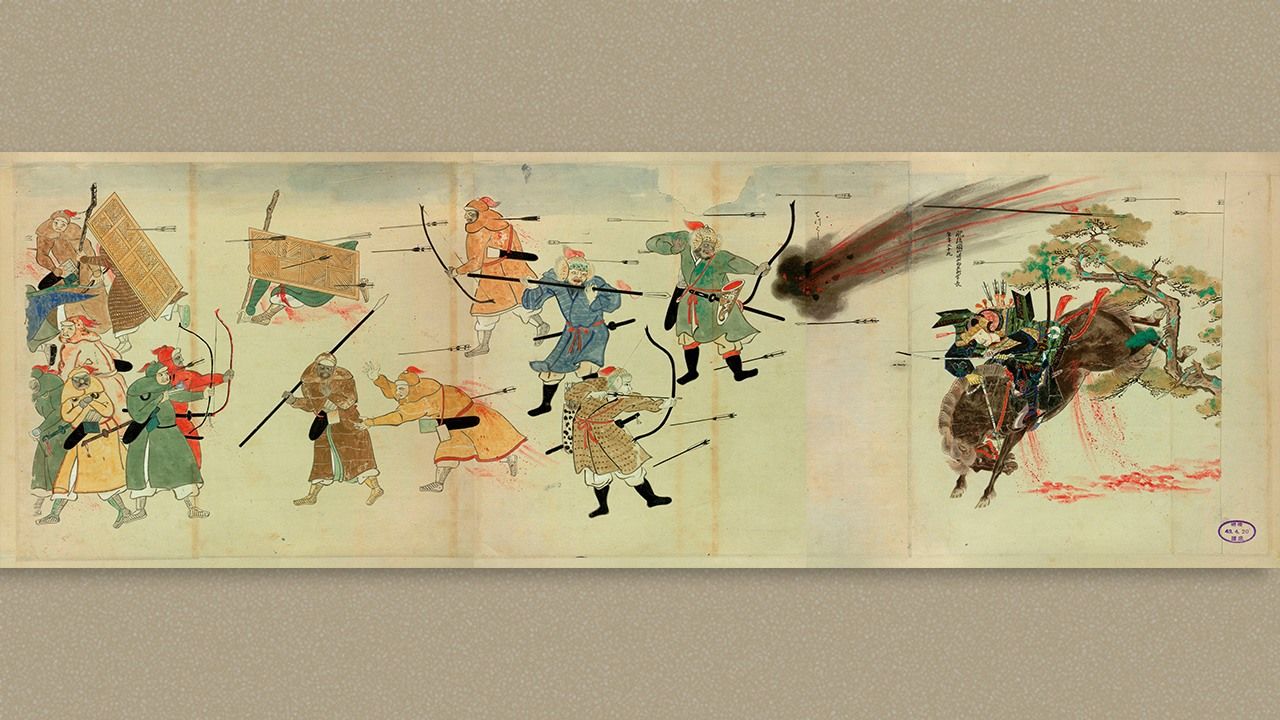 Saved by the Wind? The Mongol Invasions of Japan

History Politics Dec 23, 2021
In the late thirteenth century, the Mongol Empire under Kublai Khan made two unsuccessful attempts to invade Japan. Historian Kawai Atsushi gives the background to the invasion, examines different theories about reasons for its failure, and looks at the aftermath for both sides.

In November 1274, a fleet carrying some 30,000 Mongol Empire troops approached Hakata Bay off the Japanese island of Kyūshū. Genghis Khan had established the empire in the early thirteenth century by unifying the nomadic peoples of the Mongolian Plateau. Successive leaders expanded the empire through central Asia, and made Goryeo (Korea) a vassal state in 1259. At the time of the invasion, the Mongol holdings stretched from western Asia and Russia to northern China and the Korean peninsula.

Seeking a southern base, in 1264 Kublai Khan had moved the capital from Karakorum to the new city of Khanbaliq (now within the modern city of Beijing). Kublai, the fifth Mongol emperor and a grandson of Genghis Khan, then founded the Chinese Yuan Dynasty in 1271. Around this time, he was warring with the Southern Song Dynasty, which had its capital in Lin’an (now Hangzhou). He sent emissaries to Japan in an attempt to break its close trade ties with the Southern Song and reduce the latter’s economic strength.

Kublai’s letter to Japan talked of how it had previously sent emissaries to China, but had not done so since his rise to power. He invited the country to send emissaries again and establish friendly relations. It seems that at first he had no intention to send troops to occupy Japan, but the letter ended with what could be taken as a threat that he might if the island state did not submit as a vassal.

When the shogunate passed the letter on to the imperial court, which handled international diplomacy, the court decided to make no reply. The shogunate relayed this to the Yuan (Mongol) emissaries staying in the Kyūshū city of Dazaifu, and sent them home. Still, Kublai continued to send emissaries, but the shogunate ignored them. Why did it reject diplomatic relations with the Yuan Dynasty?

Historian Arai Takashige writes, “The administrators of this time knew almost nothing of international conditions, and had close to zero experience of contact with other states. With this ignorance and inexperience, when they were faced with the letter, they must have simply frozen. And their inexperience meant they were also unversed in diplomatic technique.”

Certainly, if the government had been aware of the immense size of the Yuan territory and how much more powerful the empire was than Japan, it could not have ignored this. But the shogunate got its information from Zen monks and their disciples from Southern Song, and it is not inconceivable that they might have downplayed the size of the Mongol Empire to protect their own interests, muddying the judgement of Japan’s statesmen.

A Mismatch in Tactics

Impatient at the lack of response, Kublai sent an invasion fleet carrying 30,000 troops (20,000 Mongol soldiers and 10,000 from Goryeo), which entered Hakata Bay on the dawn of November 26, 1274. Partly due to inadequate preparations, the disorganized shogunate soldiers on the scene allowed the Yuan forces to land without difficulty. In the battle that followed, the shogunate was at an overwhelming disadvantage, mainly due to the different tactics of the two forces. While the Kamakura samurai hoped to engage in one-to-one horseback combat, the Yuan soldiers acted in groups.

As samurai approached the enemy to make individual challenges, they were immediately surrounded and shot down. In addition to the unsuitability of this form of battle for the Japanese side, the Mongol soldiers’ short bows had greater range than those of the Kamakura combatants and their arrows were tipped with poison, making even glancing hits fatal to the Japanese. Horses as well as soldiers came under attack.

Alongside the clamor of gongs, the Yuan army deployed explosive projectiles. Gunpowder was still unknown in Japan; the black shells that exploded midair, releasing fire and smoke, amazed Japan’s warriors and terrified its horses so that they could not fight. Under such conditions, the shogunate had no choice but to retreat, while the Yuan soldiers went back to spend the night on their ships. 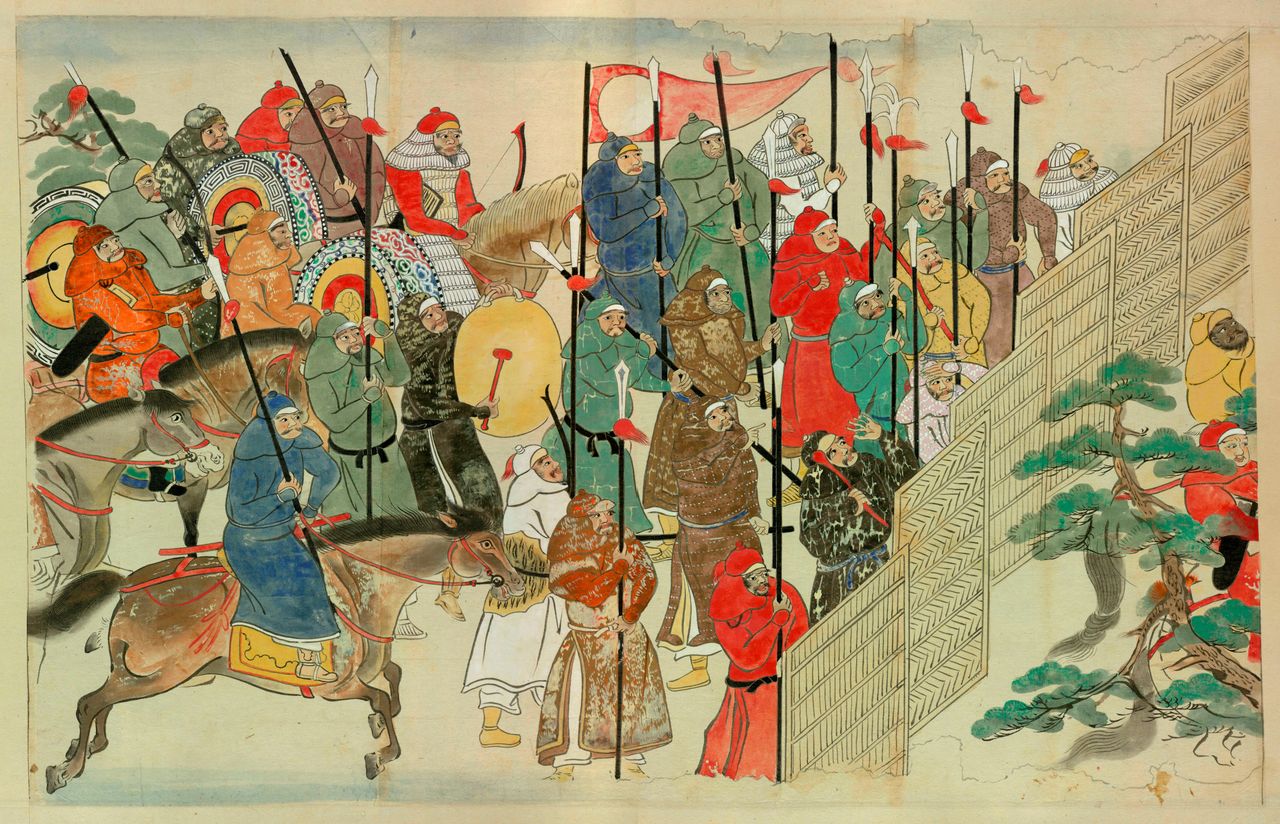 Mōko shūrai ekotoba (Illustrated Story of the Mongol Invasions) is an account commissioned by the Kyūshū samurai Takezaki Suenaga, who fought in both of the battles. When the original (now held by the Imperial Household Agency) was found in the late eighteenth century, it drew interest from daimyō and writers; many copies were made and around 40 are known to be extant. (Courtesy the National Diet Library)

The following morning, however, the Yuan ships were nowhere to be seen. This brought to an end the first Mongol invasion, known as the Battle of Bun’ei.

Many Japanese adults were taught in history classes that in both the Battle of Bun’ei and the Battle of Kōan seven years later, the Yuan fleets were destroyed by heavy wind and rain. This was the kamikaze or “divine wind.” The belief that a divine wind would blow to save the country when Japan faced crisis led to the tragic events involving kamikaze pilots in World War II, but the idea dates back to the aftermath of the Mongol invasions.

Today’s textbooks, however, have significantly altered their presentation of the Battle of Bun’ei. Consider the following example from a Yamakawa Shuppansha publication.

“The Yuan force, which had 30,000 soldiers including troops from Goryeo, attacked Tsushima and Iki before coming ashore in northern Kyūshū at Hakata Bay. . . . Used to one-on-one combat, the Japanese army struggled in the battle. However, the Yuan army also suffered considerable losses, as well as internal strife, before retreating. . . . In 1281, a huge army of 140,000 approached northern Kyūshū. However, while facing opposition to its landing at Hakata Bay, heavy wind and rain caused major casualties, and the Yuan force retreated again.”

Here “internal strife” is given as a reason for the Mongol retreat in 1274. How do other textbooks compare? The corresponding textbook from Jikkyō Shuppan states that, “In the mixed army, morale was low among the Yuan and Goryeo soldiers, who suffered heavy losses in the unfamiliar battle conditions before retreating.”

Meanwhile a textbook from Tokyo Shoseki says that, “While the samurai struggled against the group tactics of the Yuan army, they also inflicted many casualties, forcing the Yuan retreat.”

Thus, the adverse weather conditions that made the Yuan retreat have disappeared from these Japanese history textbooks. It is fascinating to note that while Yamakawa gives the reason for withdrawal as internal strife, Jikkyō offers low morale and the unfamiliarity of battle conditions, while Tokyo Shoseki states that it is the efforts of the Japanese army. Each one is different. Only in the Shimizu Shoin textbook does it say that, “At that moment, there was heavy wind and rain, and the invading army quickly retreated.” Even here, though, there is no direct statement that the wind and rain was the decisive factor.

In other words, there is no generally accepted explanation among historians as to why the Yuan army retreated. Kakehi Masahiro, a professor at Ferris University, offers an alternate theory. “For the Mongols, this was military reconnaissance, so they remained where they had landed, and never had any intention of continuing to fight.”

There are also those scholars who still think that there was a typhoon. Hattori Hideo, a professor emeritus at Kyūshū University, writes in one of his books that there was heavy wind and rain, but the Yuan army did not retreat after just one day.

Based on materials including the diary of the Kyoto noble Fujiwara no Kanenaka, Hattori asserts that the Mongol army was in Japan for seven days before retreating due to a typhoon. He says that the typhoon is mentioned in Goryeo records. If this becomes the accepted theory, Japanese textbooks may once again attribute the Mongol retreat to stormy weather.

Gratitude to the Gods

After the 1274 Battle of Bun’ei, the Yuan dynasty sent more emissaries to Japan demanding allegiance, but the de facto leader of the shogunate Hōjō Tokimune had them all executed.

Kublai responded by sending an army of 140,000 to Japan in 1281. This included 30,000 from eastern Yuan, mainly from Goryeo, and 100,000 from southern China, including former Song troops. However, the Japanese side had learned from its previous experience, and was now well-versed in Yuan tactics. Its fortifications stretching for some 20 kilometers helped the shogunate army to prevent the huge Yuan army from coming ashore.

The Japanese forces held on for around two months until a large typhoon hit Kyūshū on August 23. While the shogunate army suffered considerable casualties, all of the Yuan ships sank and their soldiers were lost beneath the waves.

In the case of the 1281 Battle of Kōan, scholars agree that a huge typhoon dealt a catastrophic blow to the Yuan army. Both the court and the shogunate made prayers afterward in thanks.

For example, Nijō Tameuji was dispatched by the imperial court to Ise Shrine, where he also visited a branch dedicated to a wind god within the Inner Shrine. A rumor circulated that this god had sent great gusts to aid the Japanese against the Mongols. In 1293, the court raised the status of this shrine, naming it Kazahinomi-no-miya.

Other shrines also had their status raised by the court, due to their supposed efficacy in the moment of crisis, including Hakozaki Hachimangū, Suwa Taisha, and Fuu Shrine. As Japan was thought to be a land of kami (native gods), the belief gradually spread that a kamikaze would protect the country in its time of need.

Kublai planned to make a further attempt to invade Japan, but Mongol forces made slow progress in campaigns in Vietnam, faced repeated rebellions in China and Southeast Asia, and were driven out of Java in a failed incursion. In the end, there was no opportunity to try again.

Despite its success in keeping the invaders at bay, the Mongol attacks weakened the Kamakura shogunate. At the time, land gains funded rewards for battle participants, so with no new land the rewards paid by the shogunate were inadequate, especially as the samurai had paid necessary battle expenses themselves. Many died in battle, or were severely injured. Retainers under the direct authority of the shogunate were economically battered, and had to raise money with their land as collateral.

The Hōjō clan saw this as a chance to take over important posts with its own people in the name of emergency. However, this led to a breakdown in loyalty, contributing to the fall of the shogunate in 1333.

Ghost of Tsushima, an action-adventure game set at the time of the Mongol invasions, has raised interest in this period in Japanese history.

(Originally published in Japanese on November 12, 2021. Banner image: An illustration from Mōko shūrai ekotoba [Illustrated Story of the Mongol Invasions] shows combat at close quarters. Takezaki Suenaga charges at enemy soldiers. While the samurai wore armor, the Yuan soldiers were garbed in cloth or leather. Courtesy the National Diet Library.)