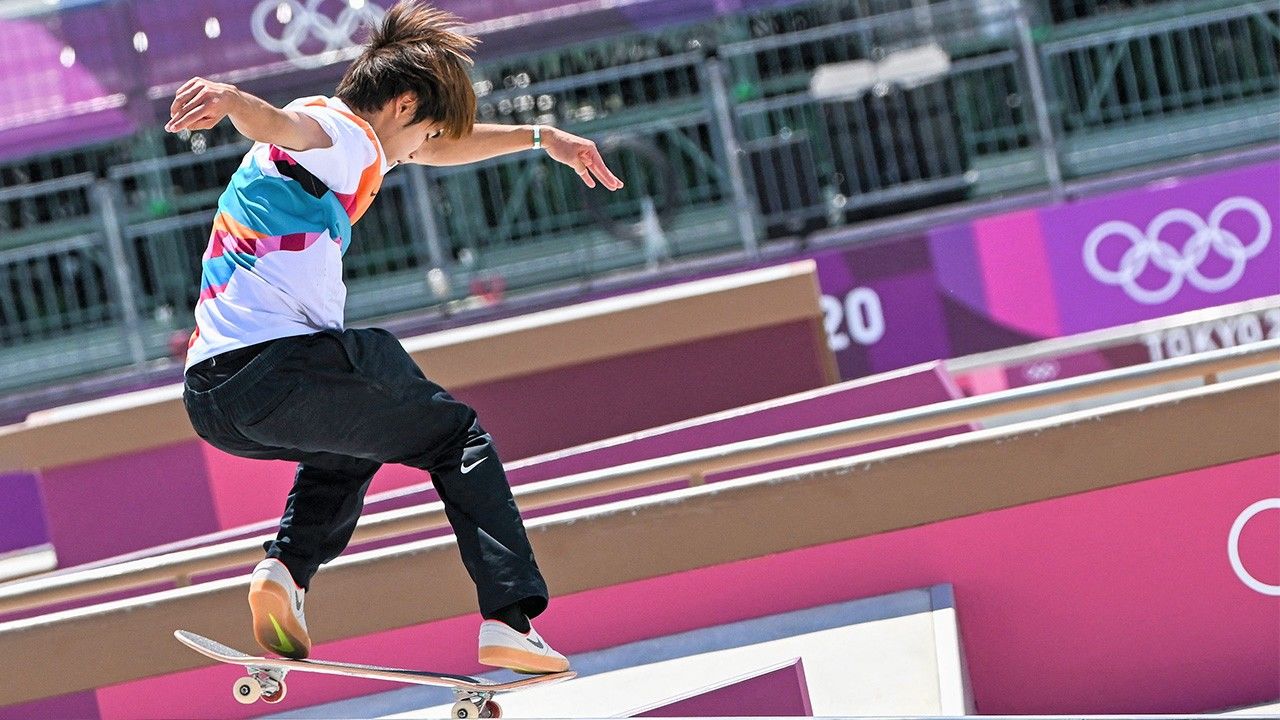 Sports Society Culture Jan 27, 2022
The Tokyo Games, held in summer 2021, saw the debut of skateboarding as an Olympic sport. The Japanese team gained much attention after winning a stack of medals, but skateboarding is still not widely accepted in Japanese society, and the competitive environment is lagging. How did Japan manage to produce so many top-level skaters?

The summer 2021 Olympic Games in Tokyo saw many memorable moments. But skateboarding in particular attracted much attention, and the Games were probably the first introduction to the sport for many spectators.

Prior to the competition, commentators suggested Japan could secure some medals in skateboarding, but it was not seen as an event where the nation would arise as a powerhouse. After the competition started, though, sporting and other programs began to feature skateboarding daily, thanks to the strong performance of the athletes.

There are two disciplines in skateboarding: Street, held in a venue that replicates a public space, incorporating obstacles such as stairs and handrails; and Park, held in a specially designed skating bowl. In the Street section, Nishiya Momiji and Nakayama Fūna won gold and bronze, respectively, in the women’s competition, while Horigome Yūto won gold in the men’s. Japanese women secured two medals in the Park event, with Yosozumi Sakura earning gold and Hiraki Kokona scoring silver. 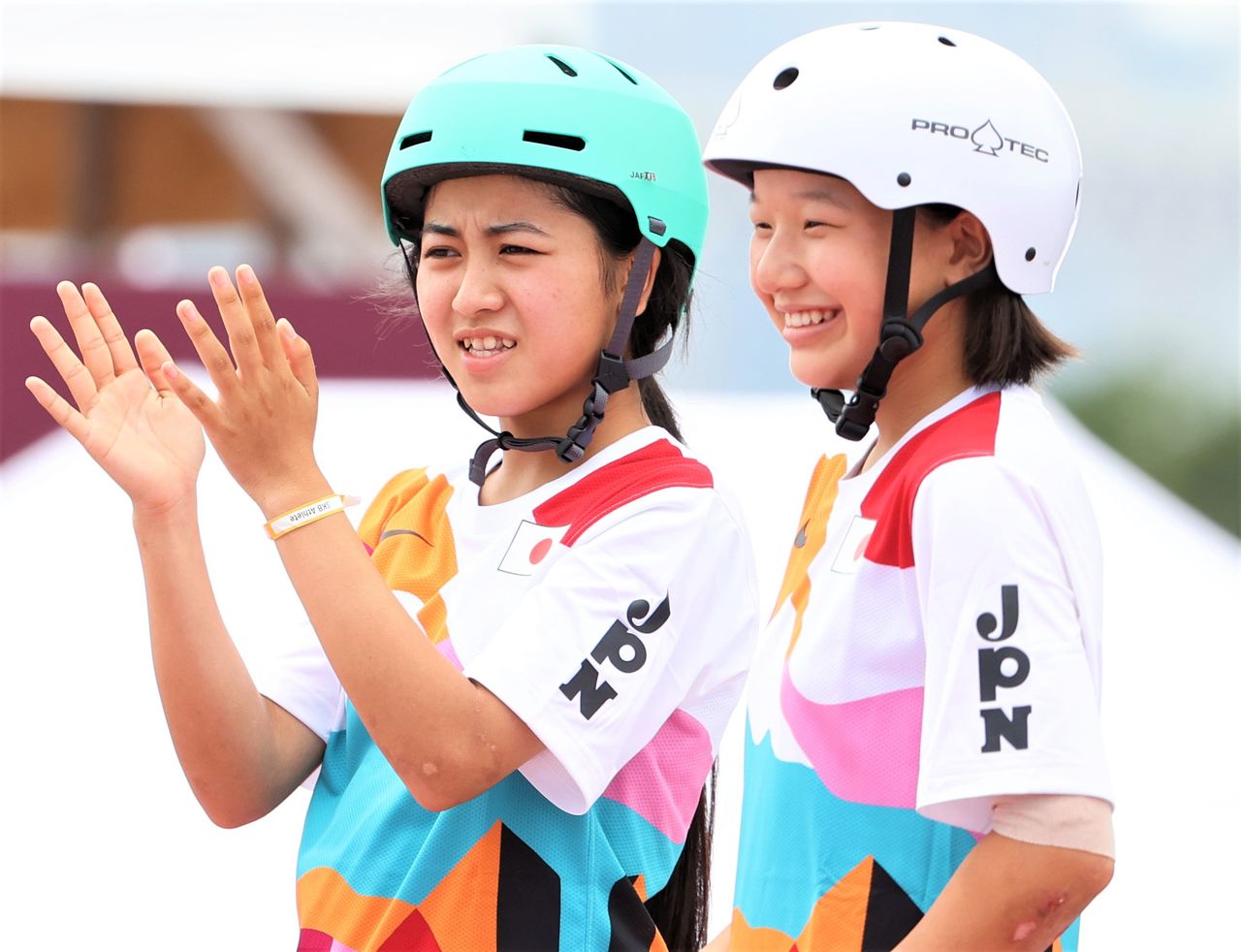 Nishiya (right) and Nakayama chatting during a break in the finals at Tokyo’s Ariake Urban Sports Park on July 26, 2021. It was later revealed that they were discussing Rascal the Raccoon, which led to renewed interest in the 1970s anime character. (© Jiji)

The frenzy of interest continued after the games, with an ongoing media spotlight on the athletes and an increase in the number of people visiting skateboarding facilities. The higher profile of skateboarding is in stark contrast to the situation prior to the Olympics, when Japanese public sentiment toward the sport was quite negative.

Street Culture a Cause for Contention

It is not uncommon in Japan to see people skateboarding in the street or in parks—all that anyone needs is a board. This is why it is termed a “street sport.”

But because people practice in public spaces, it also causes friction with other members of the public. Skateboarding can pose a danger to others. Less skilled amateur skaters can lose control of the board, sending it flying into the air, potentially damaging property or injuring passersby. Further criticism is leveled at skateboarding for the loud noise it produces. Skateboarders are also notorious for their nonconformist looks, gaining them a reputation as rebels. All these factors have led to confrontations with the general public, contributing to an image of the sport as an unsafe—and unsavory—pastime.

Skating’s unique street culture frequently breaks the norms, giving rise to the image of skateboarders as troublemakers. But there is a lack of facilities for fans of the sport to to practice outside of public spaces. Consequently, skaters continue to skate in parks and roads, even where it is prohibited, leading to further trouble.

This is not the ideal environment to nurture top-level athletes, yet somehow, Japan has managed to do just this, thanks especially to the enthusiastic support the athletes enjoyed from those around them even before skateboarding became an Olympic sport.

Camaraderie Among the Young Athletes

Horigome has his coach, Hayakawa Daisuke, to thank for his Olympic success.

Hayakawa, who is 47 years old, became an avid skateboarder at the age of 13, and decided to turn professional after experiencing skating culture in Los Angeles when he was 19. He has been a leader of the skateboard scene in Japan since it was still a minor sport. Although he is no longer in the front line, he remains passionate, and participated as Horigome’s “senior” despite his title of coach at the Tokyo Olympics.

The two met a decade ago, when Horigome—the son of Horikawa’s skateboarding friend—was still in elementary school. Hayakawa was so impressed with his skills that he decided to lend his support. Horigome was able to compete in the United States during junior high school, but his family and coach had to raise the funds themselves to achieve this. Despite approaching skateboarding associations for funding, they failed to gain support. Nevertheless, Hayakawa is surprisingly reserved in reflecting negatively on the past. 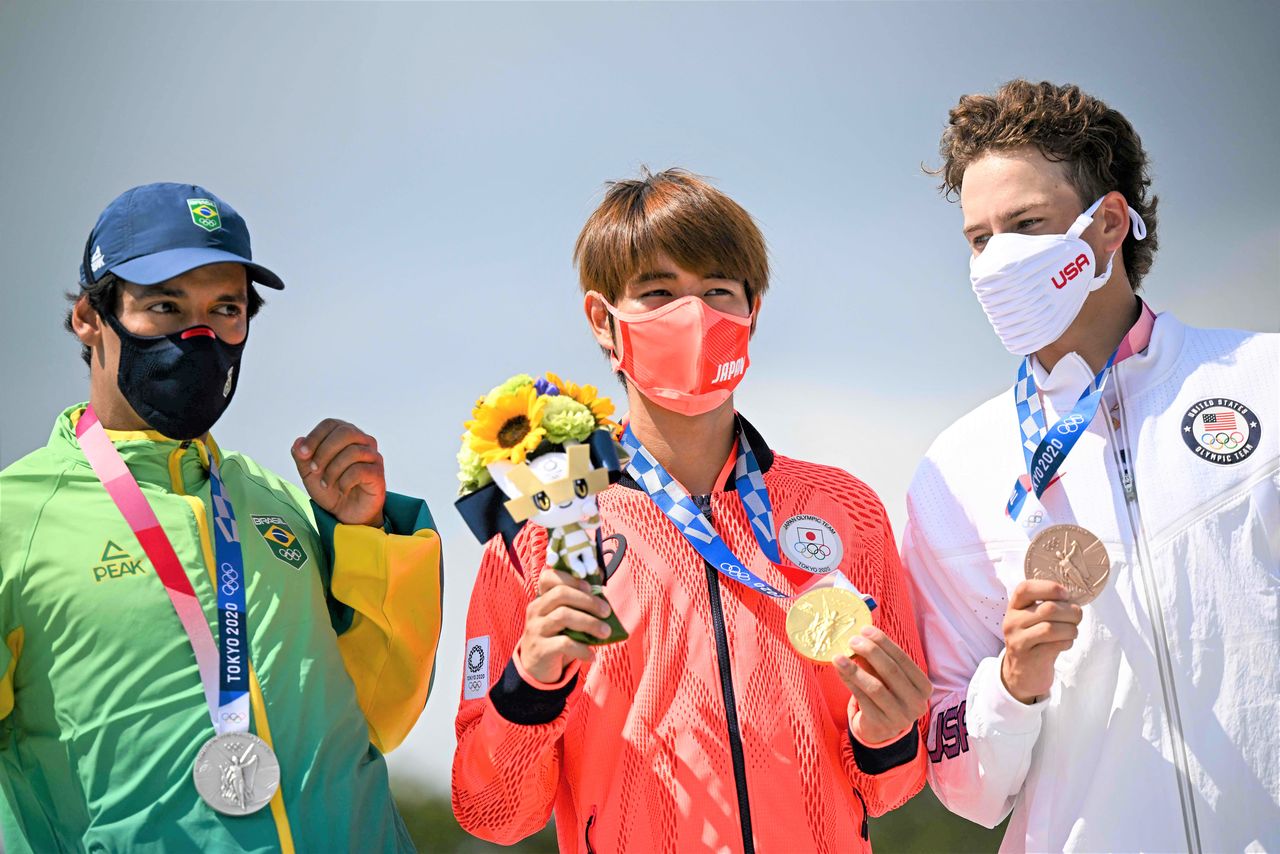 Horigome (center) won the gold medal at 22 after his demonstrating his skills in the finals. Taken at Ariake Urban Sports Park, Tokyo, on July 25, 2021. (© AFP/Jiji)

Yet another notable feature of skateboarding is the strong camaraderie among its devotees. This comradeship no doubt also contributes significantly to the growth of the athletes. Team member Shirai Sora, who competed in the Street event, says it is not unusual for athletes to teach each other tricks and share training tips. Even during the competition, athletes asked one another about the moves they had just performed.

In many sports, athletes are secretive about matters like these that could determine who tops the podium. But the openness between skateboarders is doubtlessly a result of the sense of camaraderie. By sharing their techniques, all the athletes can grow, and it was this atmosphere that produced so many medalists.

There were other factors at play. In the women’s event, many credit the team’s success to its youthfulness. Gold medalist Yosozumi was 19 years old, while Nakayama was 16, Nishiya was 13, and Hiraki was just 12. It is often said that being light and agile is an asset for skateboarding, and these youths certainly demonstrated the unique agility that their adolescence provided.

Increasingly, skateboarding is seeing a new generation who started learning early in their childhood, often introduced to the sport by parents who used to skate themselves. It was no doubt a combination of these factors that led to Japan’s medal rush.

Japan’s post-Olympics skateboarding boom is partially due to the team’s success, but the values unique to the sport, such as the comradeship, also had a big impact.

According to Hayakawa, the athletes are not skateboarding to determine their rank, and there is a culture where skaters praise one another for performing amazing tricks.

Okamoto Misugu, considered a potential winner in the Women’s Park event, attempted a big move in the third and final round in a bid to win the gold medal. She flubbed the move and finished fourth—but after her performance, athletes from other countries carried her on their shoulders to congratulate her for her efforts. This display of affection was shown repeatedly in the media, but notably, the other athletes were not trying to console her, but rather to praise her risky attempt, when she had the bronze medal in her reach if she had played it safe. 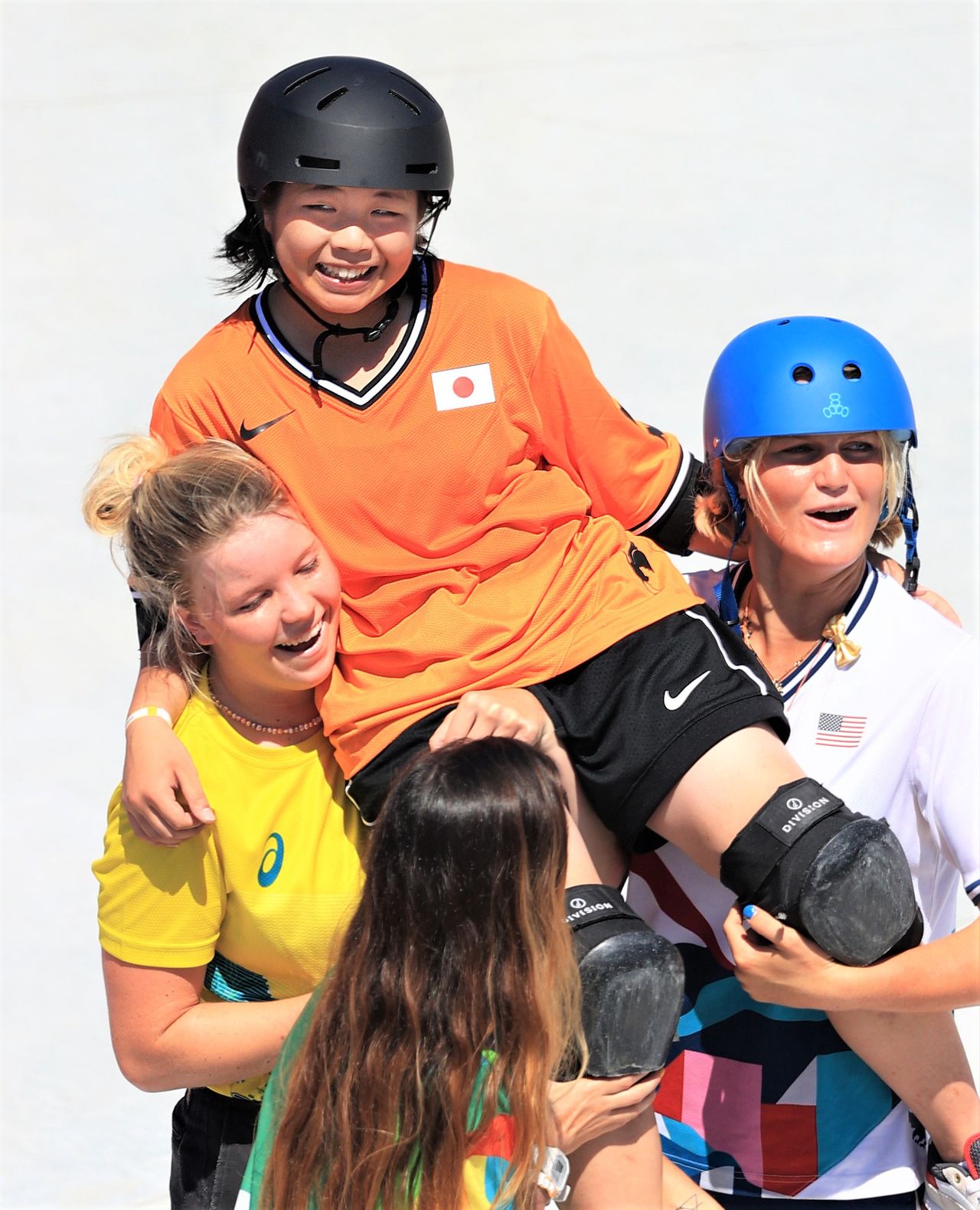 Okamoto, who finished fourth, despite expectations she could win. Her outstanding performance was most deeply recognized by her rivals. Taken at Ariake Urban Sports Park, Tokyo, on August 4, 2021. (© Jiji)

Athletes admire those who aim to give the coolest performance possible, rather than making overcoming rivals their top priority. No doubt spectators were impressed by these values that transcended winner or losing, and the novelty helped fan the skateboarding boom.

But the sport still faces issues. Not everyone has warmed to skateboarding, and confrontations between skaters, the general public, and local governments continue.

Still, there is no doubt that the Olympics boosted awareness and understanding of the sport. New skateboarding facilities have opened, including Shiokawa Mansai Park in the city of Kitakata, Fukushima, and Possibility Park in Saitama, Saitama Prefecture. A new skateboard park is scheduled to open in November 2022 in Kōtō, Tokyo, Horigome’s birthplace, and plans are underway to open a skateboard facility in Tokyo’s Yoyogi Park in March 2024. Japan’s success at the Olympics has fueled moves to develop even more skateboarding facilities.

Hopefully this will provide opportunities to boost public understanding of the sport, and to improve facilities and other aspects of the competitive environment. This will lead to greater development of athletes’ skills and cement Japan’s position as a powerhouse in the sport. The Tokyo Olympics was significant in setting the wheels rolling for skateboarding in Japan.