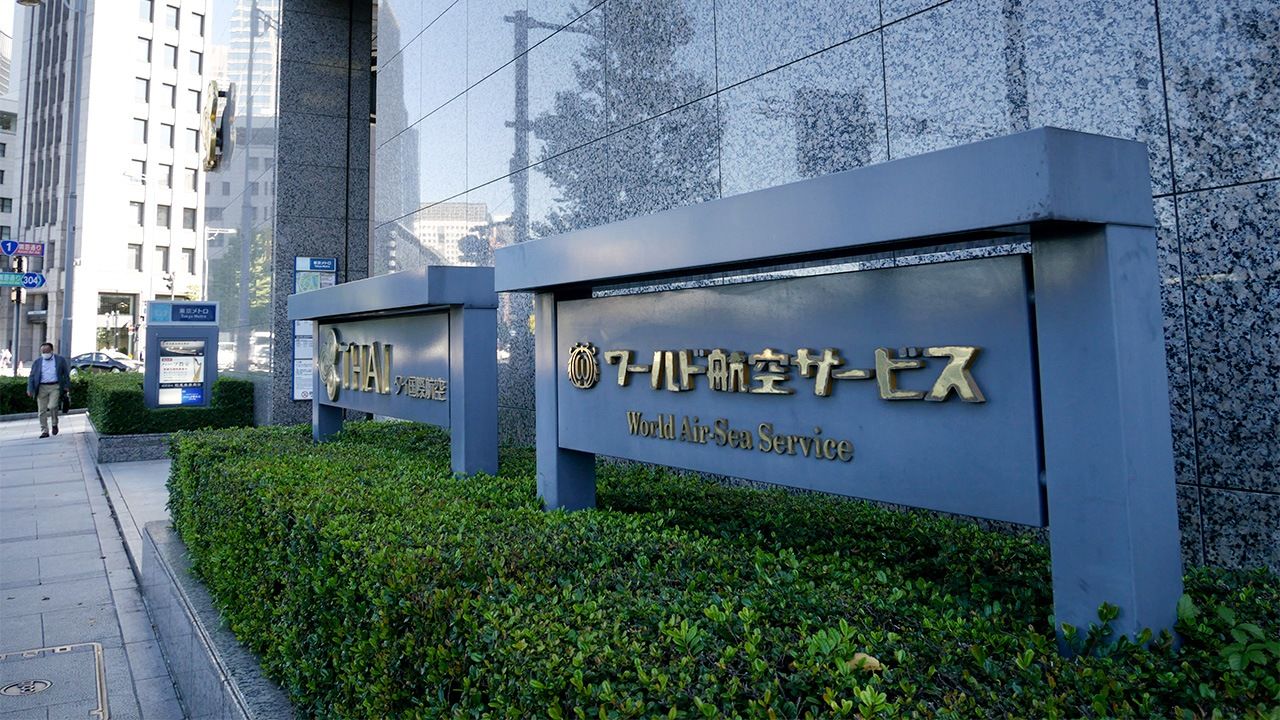 Work Society Lifestyle Family Jan 6, 2022
The Japanese government has paid out nearly ¥5 trillion in pandemic subsidies supporting companies that continue to pay absent employees, but many nonregular workers claim they have seen none of the money. One reason for this is an ongoing problem with fraudulent claims, where companies pocket the subsidies rather than pass the money on to employees.

Aikawa Yūko (not her real name) is a single mother in her thirties, living in Tokyo. She worked for a company with a diverse range of business interests, primarily in food and beverages. In April 2020, she was scheduled for promotion from part-time work to full-time regular employment. However, as the COVID-19 pandemic started to spread from the end of March, her regular employee employment certificate was cancelled, and then she even lost her part-time job. There was not a word of explanation, and she received no severance pay.

A month after her firing, she happened to receive a phone call from a friend who worked for that same company. After complaining about the business slump caused by COVID-19, the friend casually asked how she had been. When Aikawa explained that she had been fired, the friend was shocked.

A few days later, when the two met up, the friend—who dealt with the company’s internal affairs—said that Aikawa’s name was still on the company’s official roster. He explained that the company was receiving “various government benefit deposits,” like employee-absence related funds (i.e., employment adjustment subsidies). Since these subsidies are essentially a system to encourage companies to continue paying employees throughout an extended absence, it of course requires that the company still employ the workers.

This was not the only problem. Aikawa’s child had been going to kindergarten while she was working. She had to take time off work when the government decided to close schools temporarily in February 2020, but she did not receive any pay for that leave of absence either. In other words, Aikawa received no leave payments when she was still employed, despite the possibility that the company receiving government subsidies for that purpose, and it was now pretending that she was still an employee to continue getting subsidies marked for her.

Aikawa consulted with a welfare organization about her case and was advised to file a lawsuit to at least claim her past unpaid benefits, but she decided not to pursue the case due to the high legal fees involved. She has given up.

Maeda Tomomi (an alias) quit her part-time job at a salon at the end of 2020 after being “encouraged” to resign. When asked what led to the push, she explains: “I think it was because I noticed they were doing funny things with the attendance records, and pointed it out.” After that, the company suddenly took a much tougher attitude with her.

In April 2020, the business remained open even with the ongoing pandemic, and she came to work as usual. However, the records showed her as taking leave due to COVID-19 for that whole month. Although the company continued to pay her salary, Maeda was not satisfied with how they were recording her attendance, and repeatedly asked about it. In May, the response suddenly turned harsh, and her manager said, “If you’re going to keep pushing it, then just don’t come to work.” She says the first request to resign came in September.

When a company requests employment adjustment subsidies from the government, attendance records play an important documentary role as proof that employees actually took leave. Why would a company falsify these records?

According to the results of a Board of Audit fiscal 2020 survey, an unannounced inspection at 49 companies nationwide found that 5 companies, around 10% of the total, had illegally received a total of ¥96.7 million in employment adjustment subsidies. The Board of Audit identified three main methods companies use: falsely claiming to have an employment relationship with a non-employee, falsely claiming to have paid leave benefits that were not paid, and falsely claiming that employees have taken leave when they have not. In Aikawa’s case, the first two could apply, and in Maeda’s case the third could. 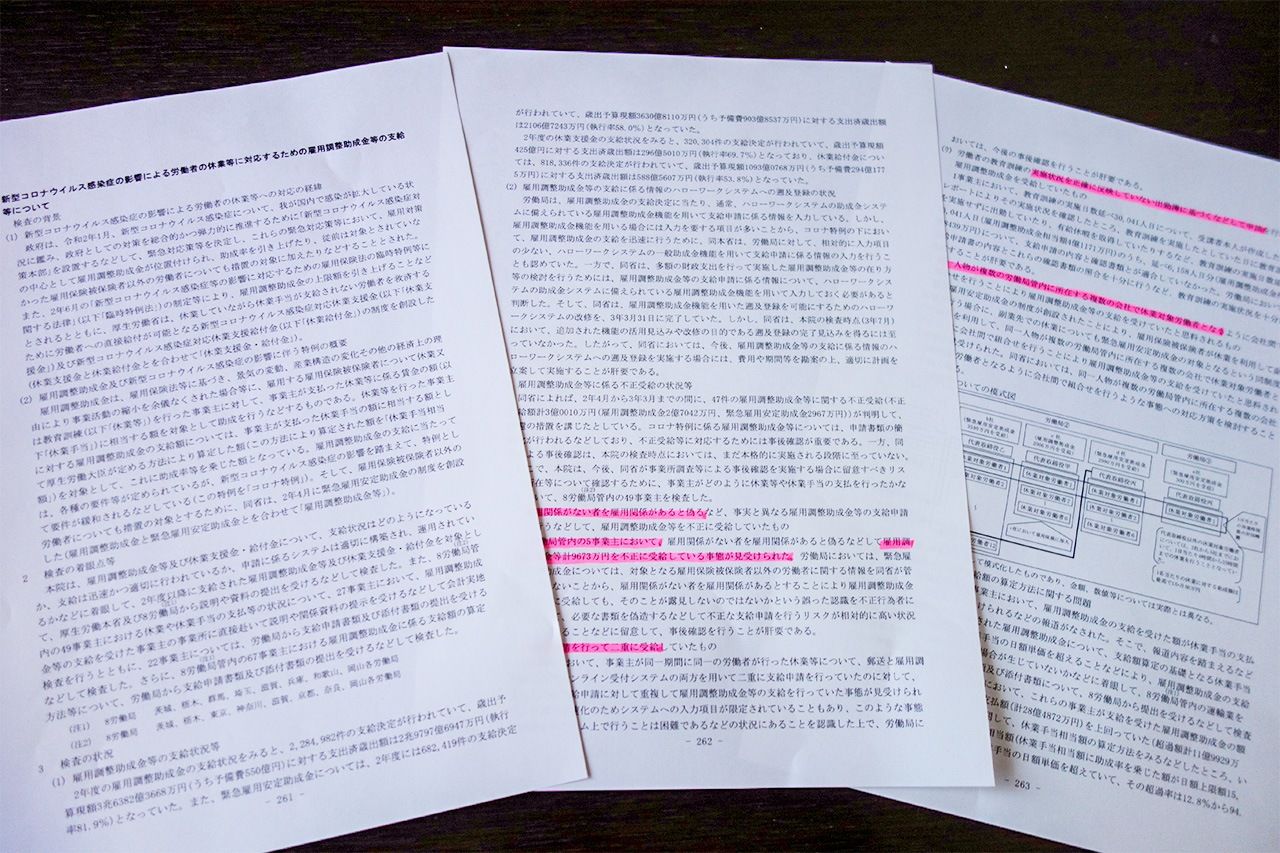 A report on Board of Audit inspection results, which touch on the illegal receipt of employment adjustment subsidies. (Photo by the author)

A Loophole in the System

Some of the reasons companies engage in this fraud are clearly malicious, in that they are trying to profit from government benefits, while others may simply have done it as a stopgap measure during a business slump.

World Air-Sea Service, which once headed up the Japan Association of Travel Agents, is suspected of receiving approximately ¥177.5 million in illegal payments. Sales of its mainstay overseas tours dropped to almost nothing, and in fiscal 2020 it fell into the red for the first time since its founding. The fraud investigation team’s interim report reveals the company executives’ unvarnished motives: “One day’s worth of leave subsidy is equivalent to hundreds of thousands of yen in sales.”

Another contributing element is a loophole in the system. Kawamori Katsuhiko, a labor and social security attorney, explains. “The criteria for receiving the employment adjustment subsidies were much stricter in the days of the 2008 global economic crisis. But since so many companies and people are suffering during the coronavirus pandemic, the barriers were lowered.”

For example, as a special case for the pandemic, part-time and casual employees who work fewer than 20 hours per week and do not have unemployment insurance were also added to the subsidy, although they had not been covered before. This created a blind spot that makes it easy to invent fictitious employees who are not included on the insurance rosters, and apply for subsidies in their names. Kawamori says, however, “The Labor Bureau is not going to overlook that, and is certain to start checking.”

When fraudulent payments are discovered, the recipient must not only pay back the amount received, but is also subject to penalties. In some cases, the name of the firm is publicized and it is prosecuted, resulting in loss of social credibility. Kawamori insists, “Fraudulent receipt of these payments will not be forgiven, making them no benefit at all to the company’s survival.”

It has been over a year and a half since Aikawa, with no trace of the subsidy benefits she was owed, was fired suddenly. Now, her daily struggles grow only worse. She manages to earn around ¥80,000 at most each month from part-time work. Her child entered elementary school in the spring of 2021, presenting another financial burden. Unable to support herself and her child, she has taken out a total of ¥2 million in public loans, including an emergency small loan from the government.

However, she has already used the money, and her account is nearly empty again. “Repayments are scheduled to start in April, but I’m worried because there’s no information about exemptions for low-income single parents like me,” she says.

Dealing with the local government is adding to Aikawa’s misery. It offers housing security benefits of around ¥80,000 a month to subsidize rent for low-income people who are unemployed or underemployed. To maintain her benefits, however, Aikawa has to travel each month to the local city office, explain what she has done to find a job, and show her bank book.

This bank book review often includes inquiries into supposedly “excessive” expenditures, along with detailed guidance from the official. One shocking session included the official saying, “There is work out there if you’re not so choosy. Are you really serious about working? There are lots of women out there earning plenty from sex work, you know.”

Now that the pandemic has calmed a little and regulations on shortened working hours for restaurants are lifted, Hello Work employment agencies are starting to get more job openings. However, even if Aikawa goes to interviews, she is often told that the company is not interested because the management worries that if there is another state of emergency and her child cannot go to school, she will have to take time off work. It demonstrates just how difficult finding work can be for single parents. 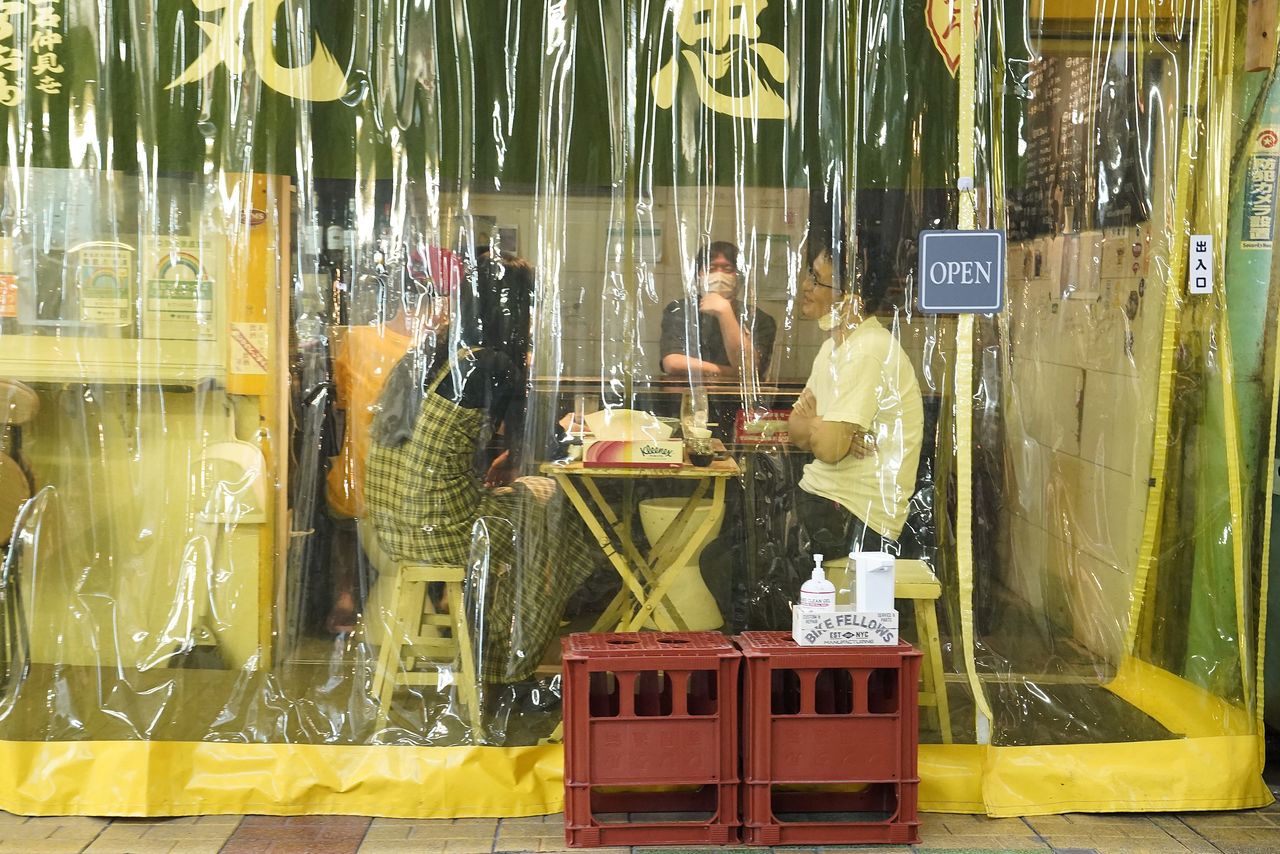 The state of emergency has lifted, but life remains a struggle for some. (© Jiji)

Even as countless nonregular workers have lost their jobs without any benefits from employment adjustment subsidies, the finances supporting the subsidy are in crisis. The subsidies are managed under the Labor Insurance Special Accounts, which are funded from the labor insurance fees collected from companies and their employees. However, payouts have skyrocketed under the special pandemic provisions, and the cumulative total since fiscal 2020 was approaching ¥5 trillion at the end of November 2021.

Expenditures have already outstripped total employment insurance payments from fiscal 2020, and since past payment reserves have also been exhausted, there is almost nothing left. The government has injected nearly ¥1 trillion from the national general account to cover the shortfall. As fiscal 2021 is expected to be even worse for businesses, more injections from the general account are inevitable. 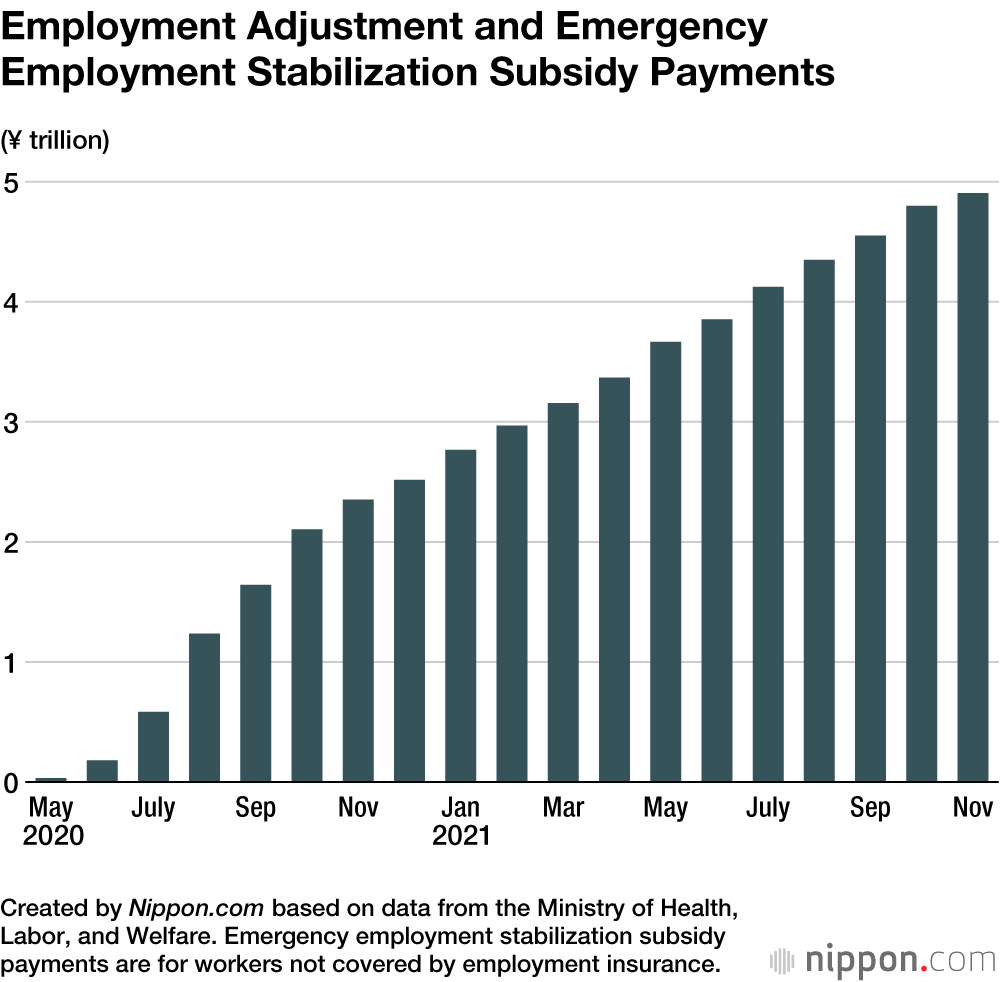 The government is currently considering scaling back the program, including gradually reducing payment amounts, but if it is unable to raise insurance premiums to cover the shortfalls, it may lead to additional tax burdens from fiscal 2022. It will likely be difficult to convince taxpayers of the need.

Ōnishi Ren, director of Moyai, a nonprofit working in poverty-related and other social fields, says that during the 2008 crisis the general demand was for the government to open the coffers and help out, but as soon as the crisis passed the talk turned to hunting for cheaters. He remembers that individuals were often the target of attacks, pointing out that only the few companies accepting payments fraudulently should take any blame, and that it is unreasonable to aim anger at the workers, who are in the weakest position of all.