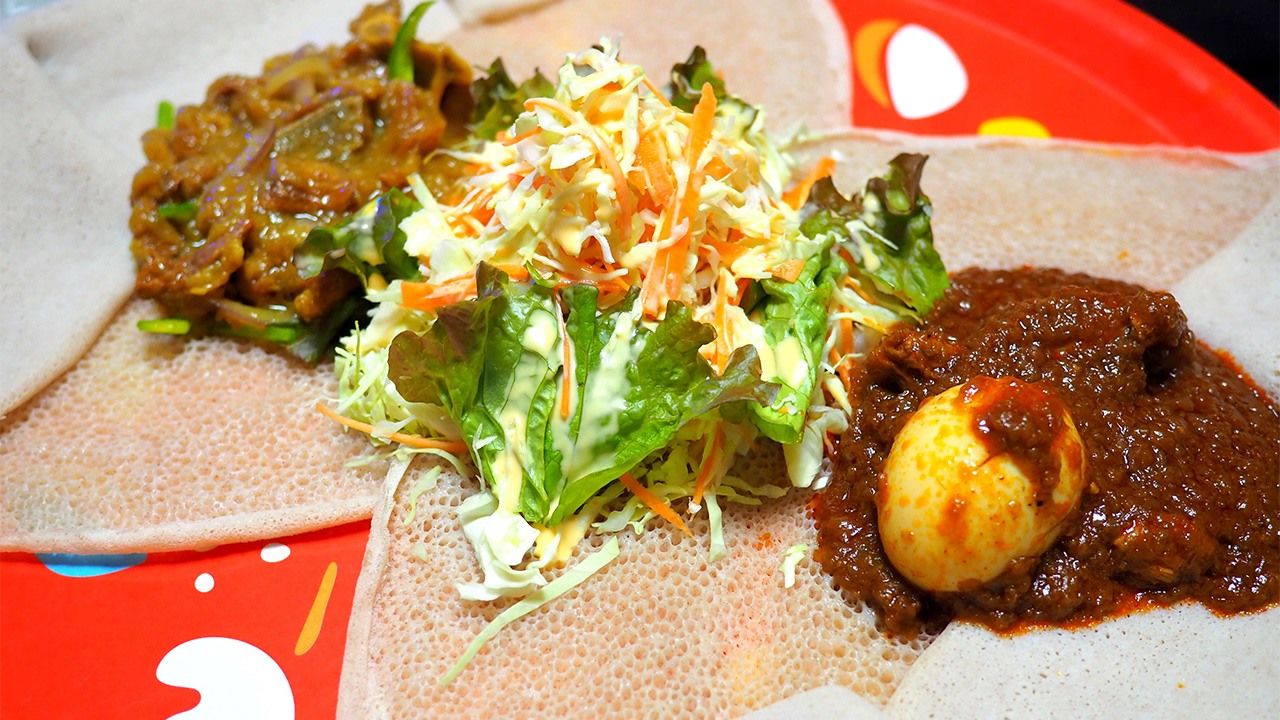 Food and Drink Culture Lifestyle World Feb 17, 2022
Not far from Yotsugi Station in Katsushika, Tokyo, stands Little Ethiopia, a restaurant marked by the vibrant green, yellow and red of the Ethiopian flag. This space has become a center for “dining diplomacy” connecting local citizens with the Ethiopian community.

A Small Community in the Big City

Japan has a number of famous ethnic enclaves, such as Korean Town in Tokyo’s Shin-Ōkubo, or Yokohama, Kanagawa, and its famous Chinatown. But there are also quite a few areas where communities of national or ethnic minorities gather under the radar.

One of those is the working-class Yotsugi neighborhood in Katsushika, Tokyo. It is home to a community of just around 100 Ethiopians, and the restaurant Little Ethiopia, just a stone’s throw from Yotsugi Station, brings these people together alongside Japanese lovers of international cuisine. 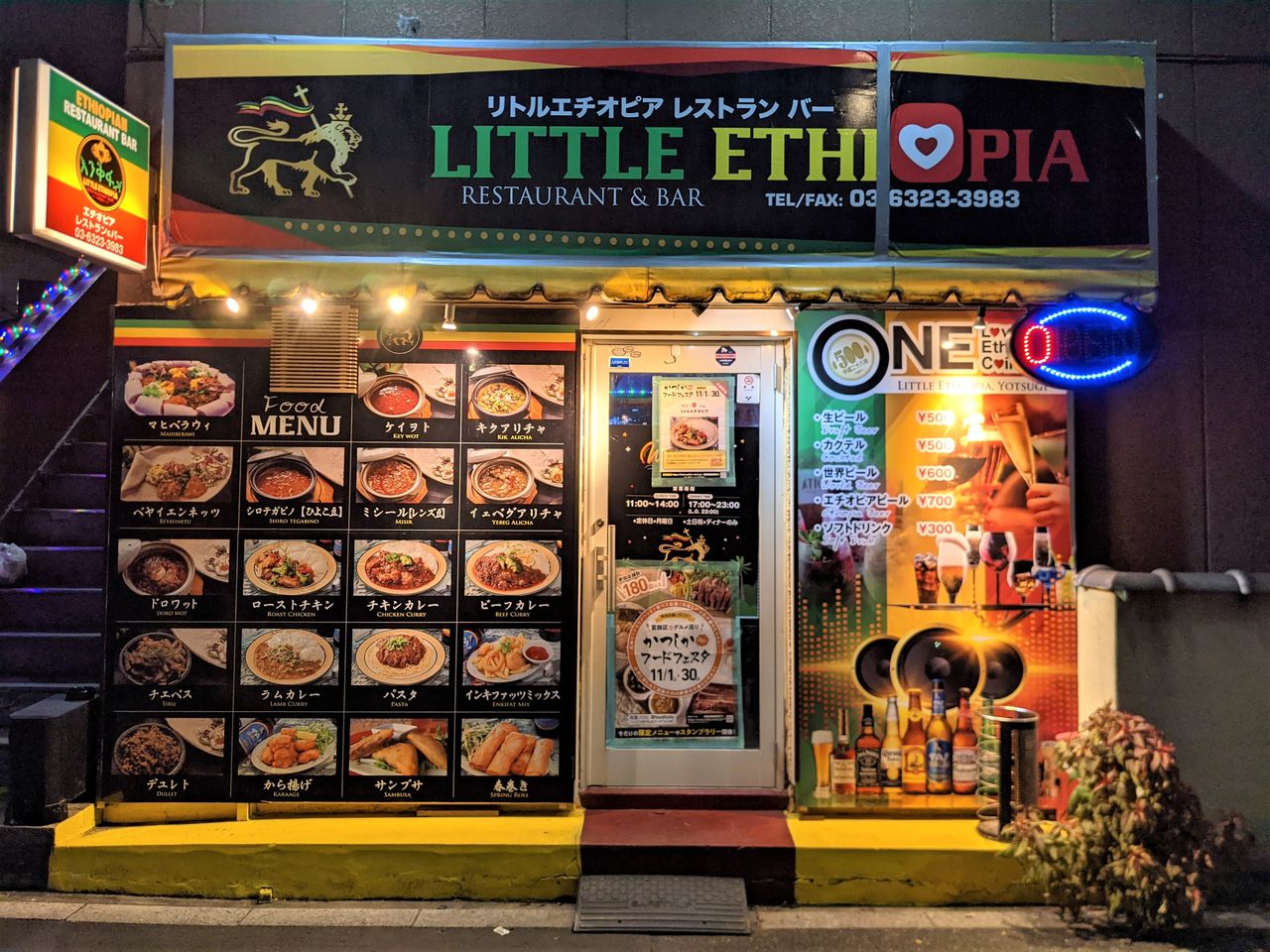 Little Ethiopia stands out in its Arakawa riverside surroundings. The vivid colors out front can be overwhelming, but inside is a calm space where friendly Ephrem and his wife Mina offer hospitality in the Ethiopian way.

Little Ethiopia offers three of that nation’s most famous flavors: injera, doro wat, and coffee. Most of the restaurant’s meals feature injera, a thin, crepelike bread made from fermented teff flour, and stewed, curry-like dishes called wat. One of the most popular wat dishes is doro wat, made with chicken and hard-boiled eggs.

In Ethiopia’s conservative society, the kitchen is a woman’s kingdom. Many people feel that a woman is unfit for marriage until she can make proper injera, doro wat, and coffee. Here at Little Ethiopia, open since 2016, Mina, who came to Japan 10 years ago, is queen of the kitchen. Her husband Ephrem, who has been here 17 years, comes to manage the restaurant in the evening after he finishes his day job.

When asked about injera, Ephrem explains: “It’s a versatile staple of the Ethiopian diet, like rice is for Japanese people. It’s made from teff, a type of rice that is considered a superfood. We mix teff flour with water and let it ferment.”

There are three requirements for good injera: well-balanced acidity and sweetness, fluffy texture, and fine and evenly distributed air bubbles on the surface. In Ethiopian households, mothers start teaching their daughters how to make the bread at the age of seven, to help ensure an easier life after marriage. 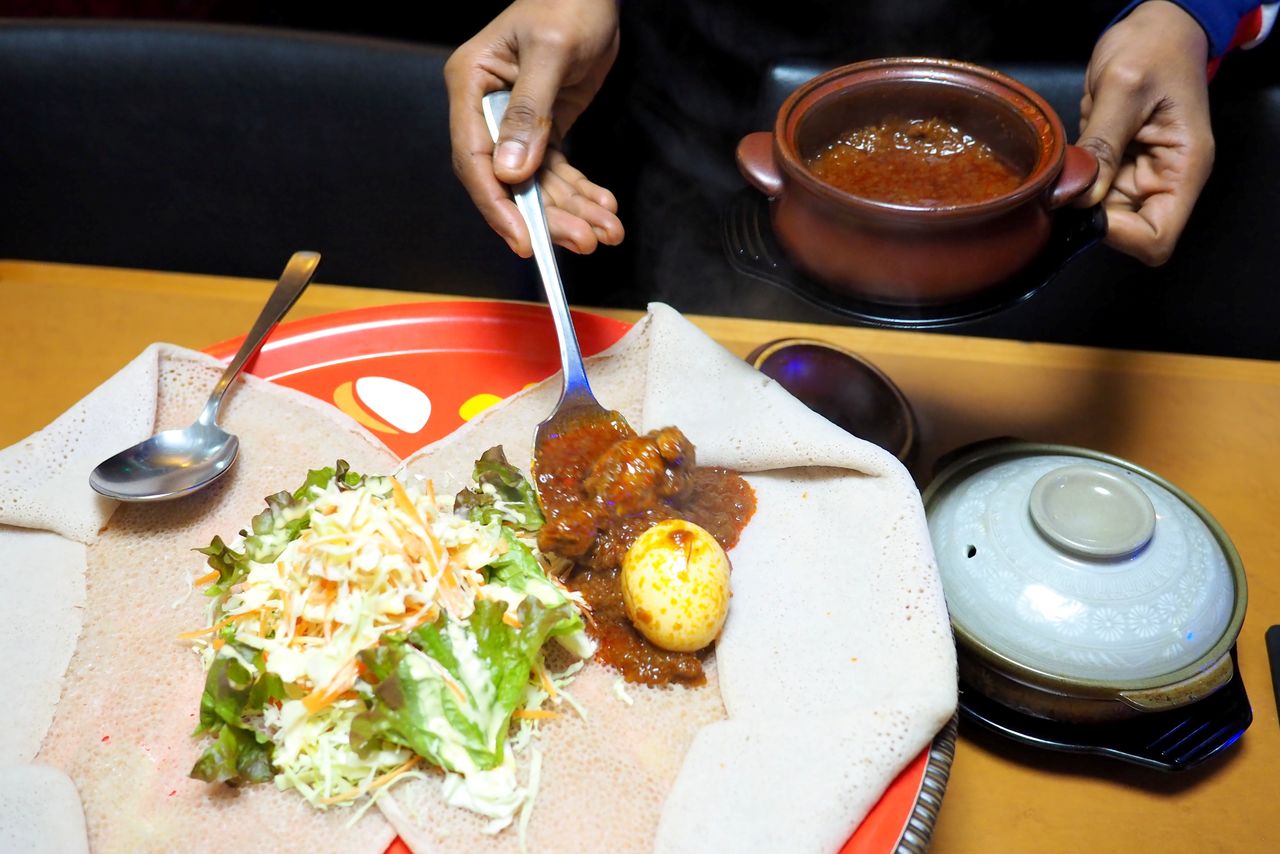 Here, injera, with its unique acidity and texture, is served with doro wat cooked in a small earthenware pot. It is more filling that it looks.

The main dish, wat, has a wide variety of ingredients, including chicken, mutton, beef, and vegetables. The most popular is the previously mentioned doro wat. Doro simply means chicken, and as the name would indicate, it is made from chicken drumettes and boiled eggs stewed in a spicy broth called berbere. Diners eat it by scooping it up with injera.

The rich spiciness of doro wat mixes with the sweet and sour injera to create a deep, fascinating flavor, and it is no wonder that the restaurant has a loyal crowd of regulars.

I have visited Little Ethiopia many times, and on one occasion I witnessed something particularly fascinating. A group of Ethiopian were feeding each other injera. When my eyes went wide, Ephrem explained what was going on.

“This is called gursha. It’s a way to show affection to friends or guests. When someone feeds you, then you must feed them in return.” He then went on to offer me gursha with a smile on his face. It felt like I was in Ethiopia itself.

Once you’re full of injera and wat, it is time for coffee, another essential element of Ethiopian cuisine. Ethiopia is the birthplace of coffee, in fact, and even has a coffee ceremony analogous to Japan’s sadō tea ceremony.

Guests are first welcomed with the aroma of roasting coffee beans; water is then boiled in a ceramic pot called a jebena. The finely ground coffee is brewed in this pot, and friends and family gather to enjoy it as a group. 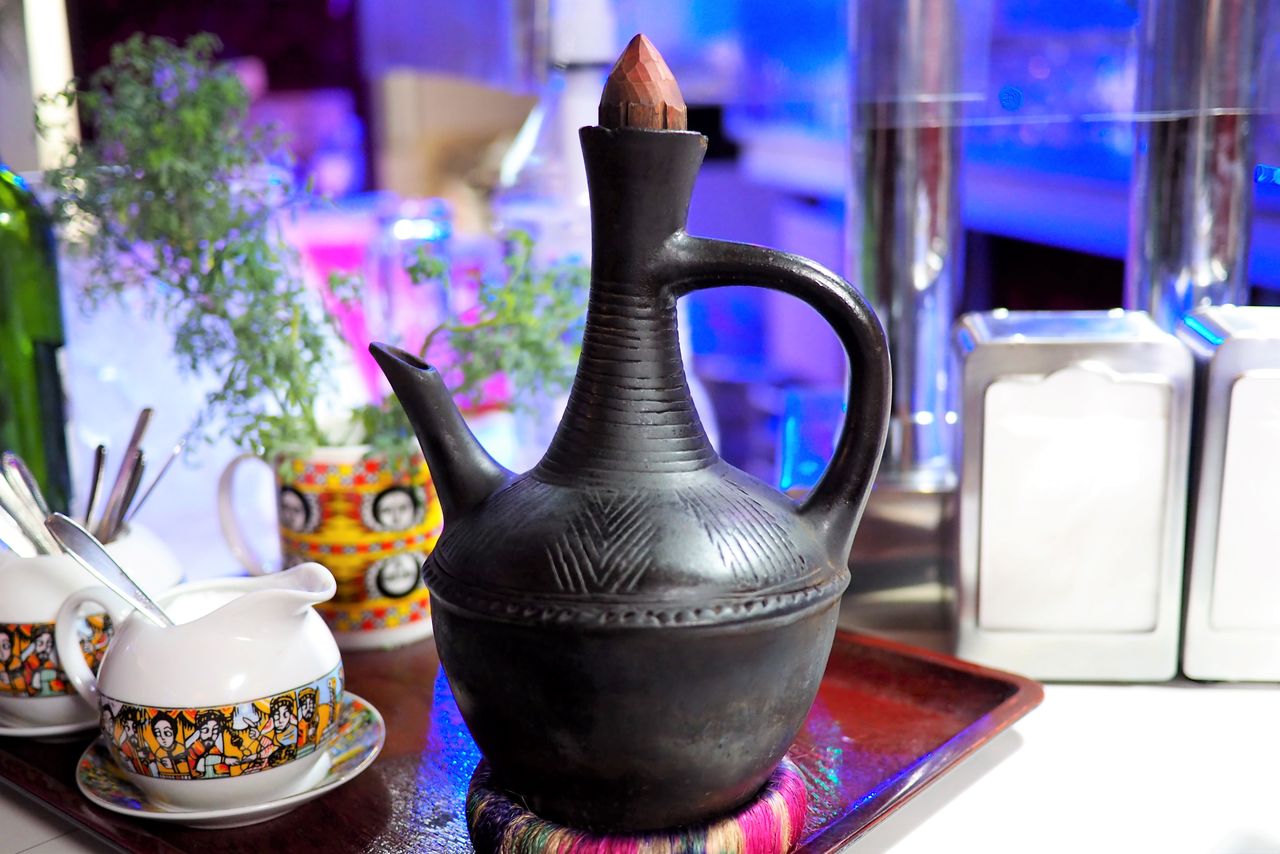 A jebena is an essential part of Ethiopia’s coffee ceremony. It is used both to brew and serve the pan-roasted, finely ground coffee beans.

This moment of authentic coffee service brings restaurant customers closer together, and so closes the Yotsugi night.

And yet, I still wonder, why has Ephrem come to Japan? And why have so many Ethiopians gathered here in Yotsugi?

Ephrem explains that he first came to Japan in 2004 to help with his brother’s work. “Right when I was about to graduate from university, I got word from my brother, who was working at the Ethiopian embassy in Tokyo, that he needed help. That was what made me decide to come to Japan, but all I knew about the country was its advanced technology and Oshin.”

Oshin was a serialized drama television series that aired on NHK from 1983 to 1984. It depicts the life of a woman who survived the war and postwar period, and recorded Japan’s highest ever viewer rate, at 62.9% of the television watching public tuning in.

Oshin has been translated and broadcast in 68 nations worldwide, and it captured the hearts of millions of Ethiopians. One scene in particular, where the titular character rides down the Mogami River on a raft in the blowing snow, has become almost legendary in Ephrem’s home country.

“Seriously,” he says. “When Oshin airs, everyone stays home to watch, and we all cry.” 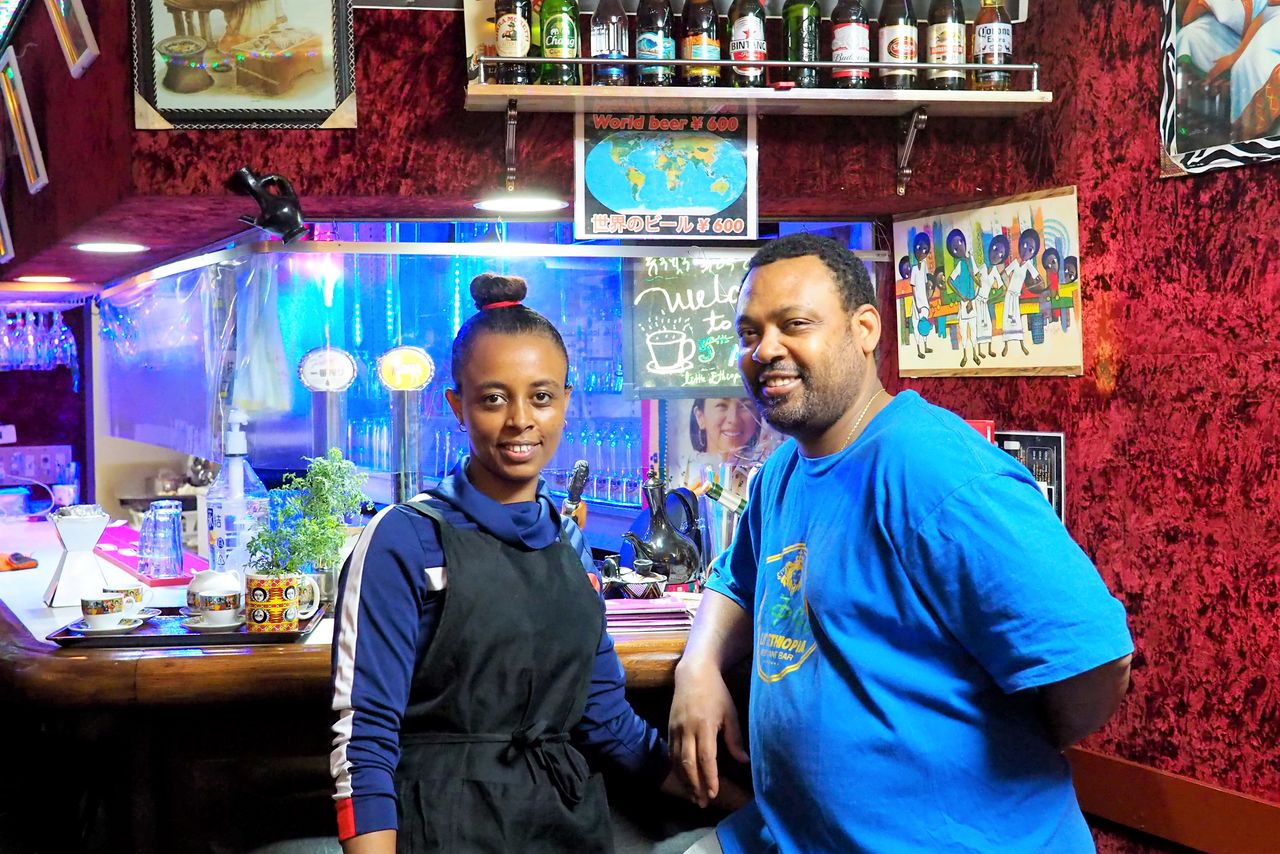 Kitchen-mistress Mina poses with Ephrem. Both can speak fluent Japanese and are happy to answer questions about the food.

He opened the curtain on a new life in Oshin’s homeland. Here, he met his wife Mina, and they had two children. Of course, life rarely goes so smoothly. In 2005, protests over the Ethiopian general election descended into general unrest, and before long Ephrem realized he could not return home.

“There are over eighty ethnic groups in Ethiopia, and so there have long been conflict and human-rights issues. My parents were deeply passionate about education and sent my siblings and me to study at university, but my siblings were not satisfied with what the government was doing and started to support the opposition party. That drew attention from the government.”

Some members of his family were in such danger that they fled to the United States.

“Of course, I want to see my parents and siblings back home. But they know that going back could be dangerous, so they don’t ask me to do it. And so, I keep working in Japan.”

Sadly, the road back to Ethiopia remains closed. Major military conflict broke out in the north in November 2021, resulting in a series of massacres and detentions. Japan is now home to some 400 to 500 Ethiopians, many of whom have as complicated a history as Ephrem.

The Secret to Settling Down

Yotsugi has many old-fashioned wooden apartments popular with Ethiopian residents, and one of those is also the main office of the nonprofit organization Adeyababa Ethiopia Association. Director and cofounder Abebe Sahlesilassie Amare told me about the relationship between this town and the Ethiopian community. 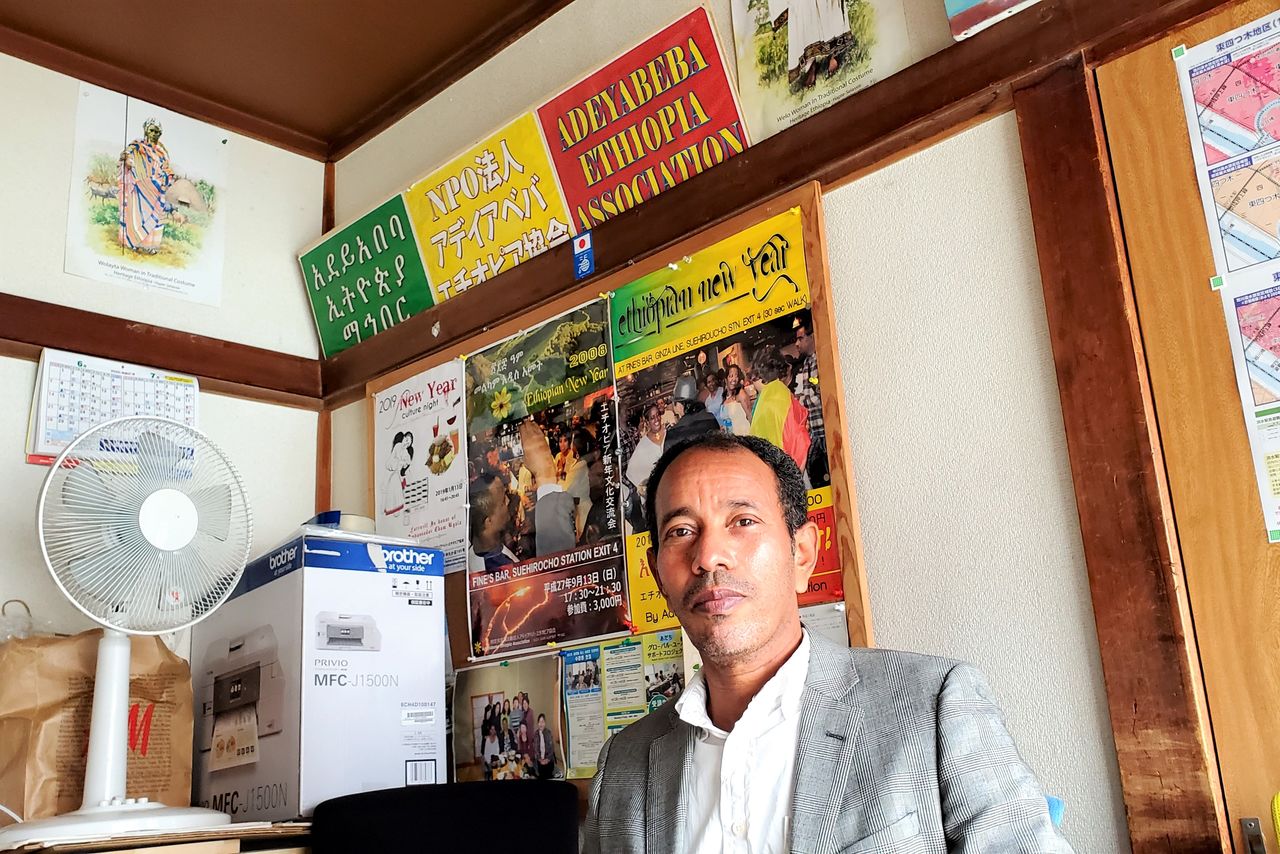 Abebe has lived in Japan for 25 years. His NPO’s name, Adeyabeba, comes from a flower traditionally given to loved ones in Ethiopia. (© Kumazaki Takashi)

“It’s really difficult to rent an apartment in Japan as a foreigner who does not speak the language. One of the people who came to Japan in the early days met a particularly good landlord, and after that more Ethiopians began to gather in Yotsugi,” he says.

Abebe helped found the NPO in 2009 to help support his fellow Ethiopians. “There are waste oil and leather plants around Yotsugi, and many Ethiopians who struggle with the language work there. The work is dirty, difficult, and dangerous, the kind most people don’t want to do. There have also been cases where companies fired people unfairly, or refused to pay wages, but those are rare now.”

Abebe’s activities are diverse and include not only mediating in labor disputes, but also interpreting at government offices and hospitals, holding Japanese language classes, and introducing lawyers. During the pandemic, he has also helped distribute vegetables and rice to Ethiopians in difficulty.

Abebe works tirelessly, and without pay, to help his fellow Ethiopians. The one thing he values above all in what he does, he says, is connecting with Japanese people.

“In Europe, immigrants often live in tight groups, and that can lead to conflict with local citizens. Here in Yotsugi, there’s been trouble with police over Ethiopian residents drinking and celebrating in public. That is not what we want. I think it’s important that we get along with Japanese people, and so we have lots of events to create more interaction between both groups.”

They help out with bon odori dance events, give presentations on Ethiopia at local elementary schools, and have soccer matches with local high school students. He says that food is a big help in these local activities. At first, only Ethiopians took part in the events, but now nearly half are Japanese. Food has helped to break down language barriers. “I call it ‘dining diplomacy,’” says Abebe. “We invite our Japanese neighbors to come and eat injera and join the coffee ceremony. Dining together opens people’s hearts, and I think it creates affection. It’s a good way to create bonds between people.” 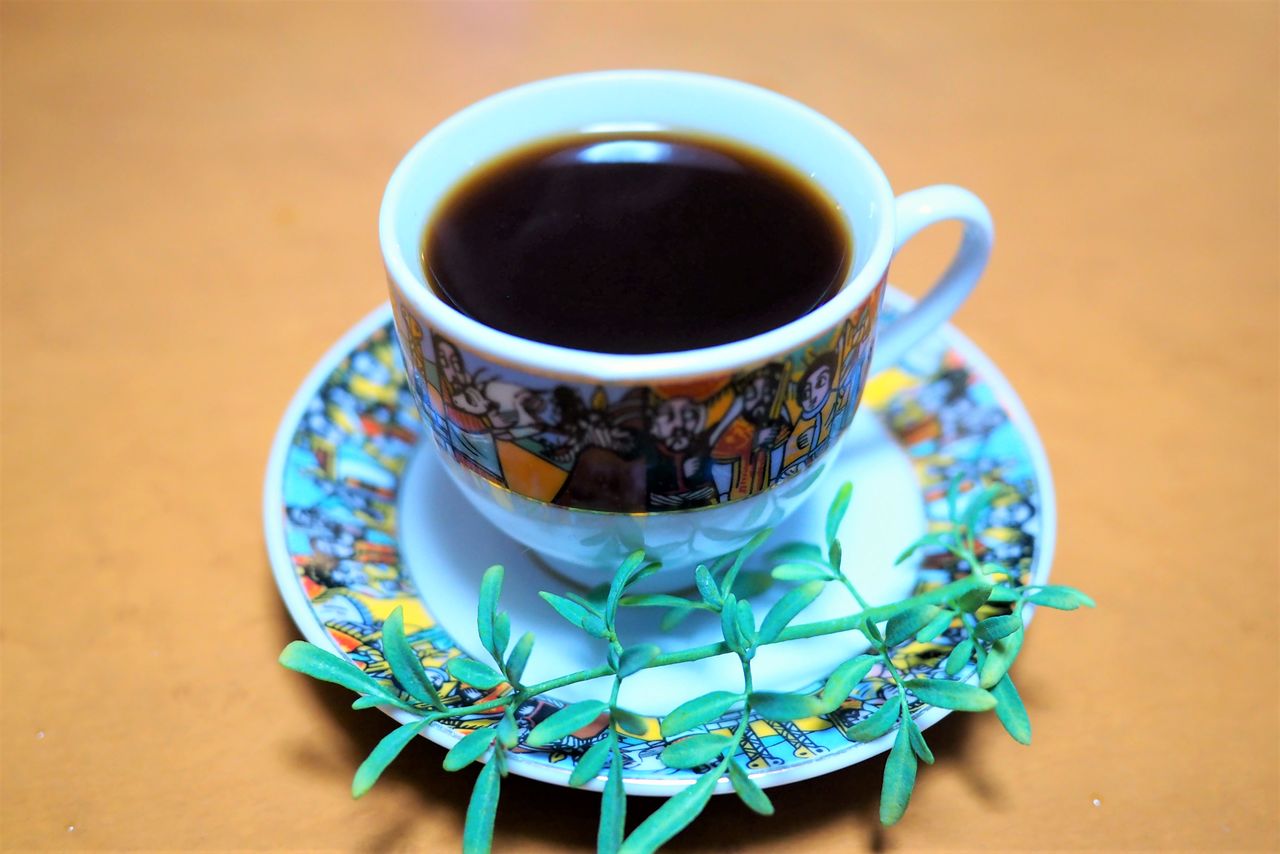 Aromatic Ethiopian coffee is served here with a type of herb that can be placed in the drink to change the flavor.

This working-class neighborhood has become a center for dining diplomacy between Ethiopians and Japanese, and Little Ethiopia is the heart of it. Ephrem says he opened his shop to be a place for his countrymen, and to share his home culture with Japan. Now, it is an essential part of the Yotsugi landscape. 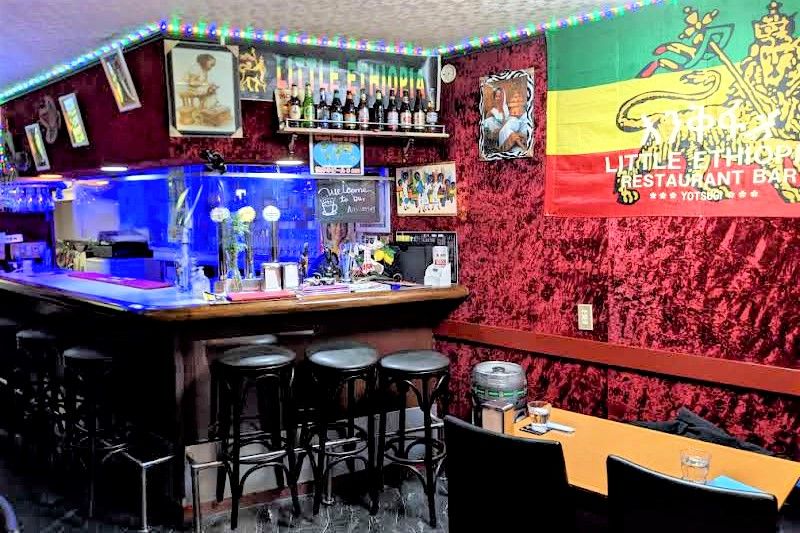 The Little Ethiopia Restaurant and Bar.