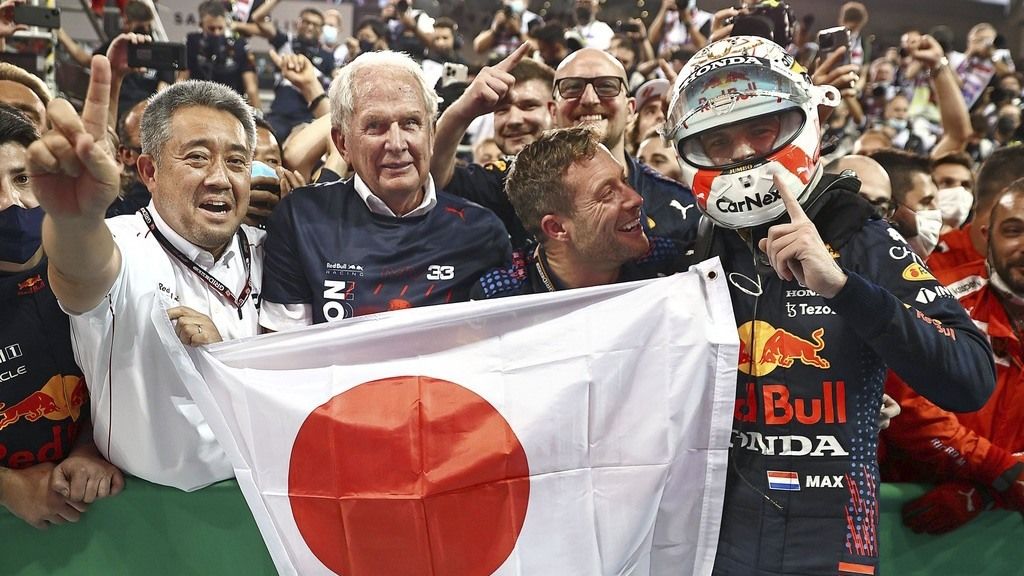 Sports Mar 16, 2022
After announcing that it would withdraw from Formula One competition at the end of the 2021 season, the Honda Motor company went on to achieve a final, dramatic victory. We look back at Honda’s long and eventful F1 racing history.

Honda won its first Formula One title in 30 years when, on December 12, Red Bull–Honda’s Max Verstappen took the checkered flag in the last race at the F1 championships held in Abu Dhabi in the United Arab Emirates, thereby winning the 2021 World Drivers’ Championship title. This was Honda’s first Formula One victory since Ayrton Senna, racing for McLaren-Honda, in 1991. 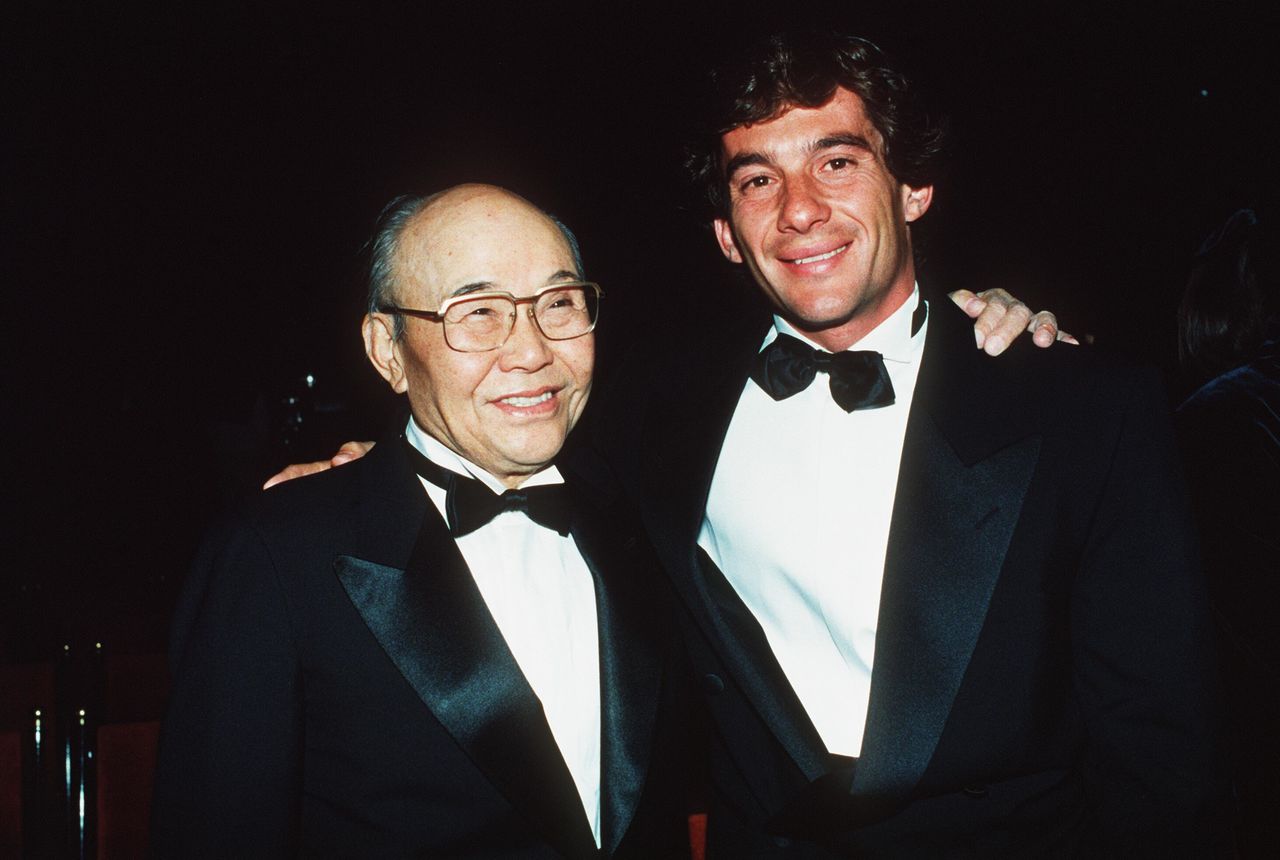 F1 competition was a long-lasting dream at Honda, and an important part of the company’s DNA. Honda cofounder Honda Sōichirō made his first Formula One bid in 1964, despite the manufacturer having just released its first kei-class truck and compact sports car the year before. Honda also had a shorter history than the other Japanese car makers, none of which participated in Formula One, so its decision to vie for the pinnacle of motorsport shocked Japan and the rest of the world. 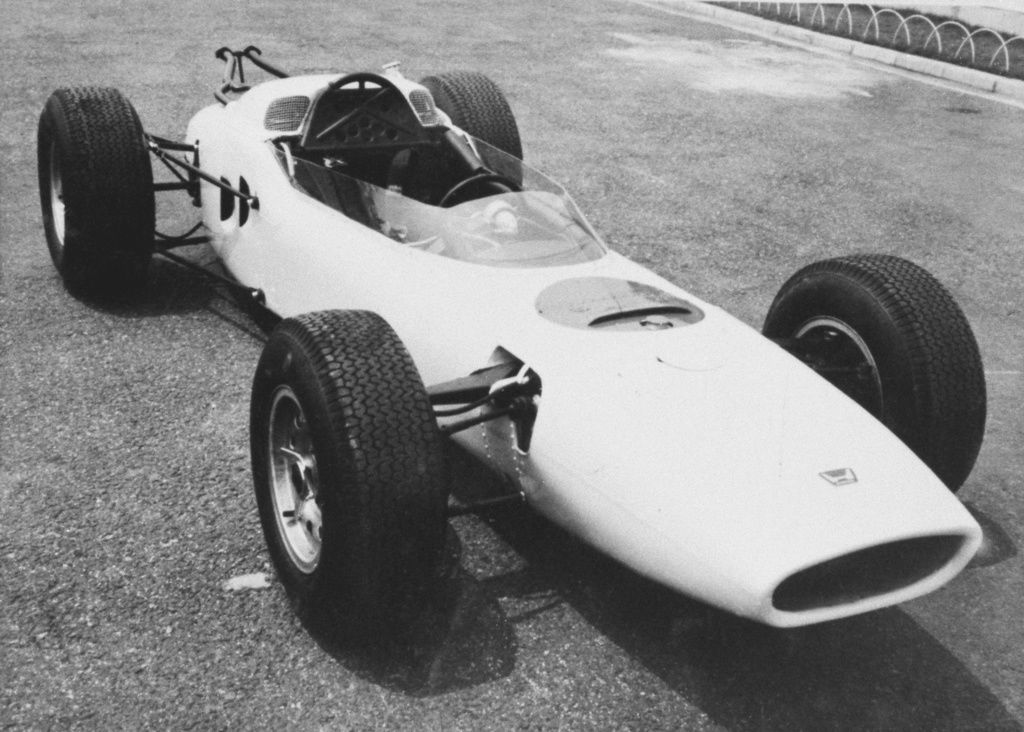 Japan’s first authentic Formula One race car, the Honda RA271, made its debut in the West German Grand Prix in August 1964. (© Kyōdō)

But this seemingly preposterous move enabled Honda’s engineers to grow and subsequently fueled the company’s leap to its position as one of Japan’s big three car manufacturers. Honda took a break from Formula One competition in 1968, but burst back onto the scene in 1983, going on to make a name for itself in Formula One circles over a 10-year reign that would come to be referred to as the “second era.”

A Record Yet Unbeaten

During the second era, Honda supplied engines to well-known British teams Williams and McLaren and took home five consecutive Drivers’ Championships titles from 1987 to 1991 before going onto win the Constructors’ Championships six times in a row, from 1986 to 1991. Honda joined forces with McLaren in 1988, and won 15 of 16 tournaments it contested with the motor racing team. In fact, the McLaren-Honda’s winning percentage remains unbeaten, giving it a reputation as the greatest team in Formula One history. 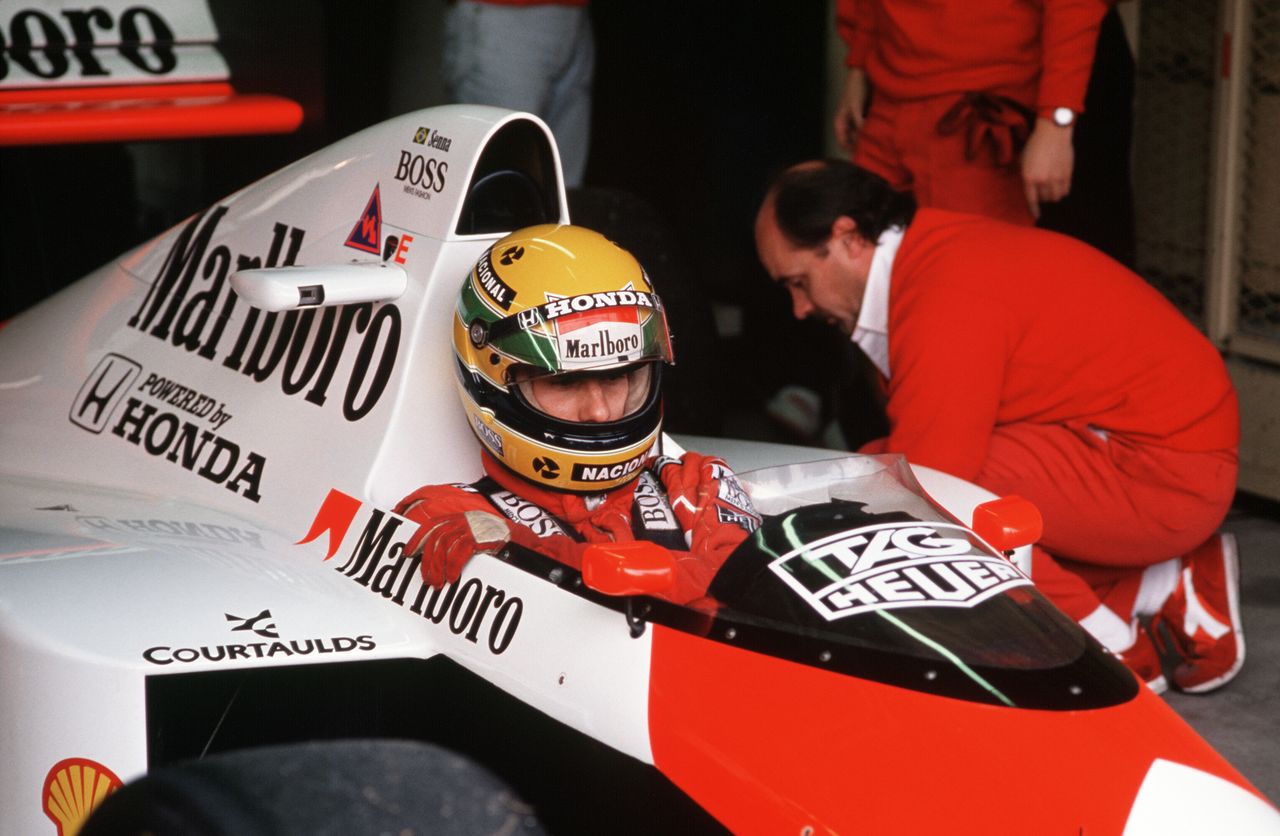 Honda once again withdrew from Formula One competition in 1992 after the burst of Japan’s asset bubble, but returned to the sport in 2000. However, the manufacturer was unable to reproduce its former glory during what is referred to as its “third era.” And so it came to pass that at the end of 2008, as the subprime lending crisis was plunging the global economy into recession, Honda again announced its withdrawal from F1. In the space of nine years the automaker had only won a single competition, in 2006, but that is not to say that its technical prowess no longer cut it internationally. After Honda withdrew funding, its racing team was bought out by Ross Brawn and competed the following year as Brawn GP, winning both the Drivers’ and Constructors’ Championships. Honda’s engineers must have wished they had stuck with it for just one more year! The Brawn GP win was a significant motivation for the Honda team when it returned to Formula One competition in 2015, kicking off its “fourth era.”

In fact, many of Honda’s fourth-era team had worked for the manufacturer in third era as well. Initially, however, the team struggled to deliver. In the years that Honda had been away from competition, significant changes had been made to the Formula One power unit regulations. Rather than being powered by naturally aspirated engines, F1 vehicles now employ hybrid systems that combine turbo-charging with two types of energy recovery, and are therefore referred to as power units rather than engines, due to the way they combine engines with hybrid systems.

While the current power unit regulations were introduced in 2014, one year before Honda returned to competition, those manufacturers that had remained part of F1 were involved in formulating the new rules and had already been refining their own power units for several years, whereas Honda only began developing its power unit in 2013, the year in which it announced its return to competition. Honda therefore only had two years to develop a power unit—a disadvantage that meant that in the initial years of Honda’s return to competition (in partnership with McLaren), the power units not only underperformed but were unreliable, resulting in a spate of disappointing races. Things were so bad as to make McLaren-Honda’s Fernando Alonso, driving in the Japan Grand Prix in 2015, curse his “GP2 engine,” after insufficient power caused him to be overtaken on the straight.

Deciding things had to change, Honda carried out repeated restructuring and in 2018 arrived at its current structure, one that would at last enable it to confront its rivals head-on. It was Honda’s 2019 partnership with Red Bull Racing, a world-beating team that had achieved four straight victories from 2010 to 2013, that finally gave it a chance at victory.

Deployment of Future Technology Pays Off

In the autumn of 2020, however, Honda once again decided to exit F1. This time, however, it gave itself one more chance at competing before bowing out. News of the decision prompted Asaki Yasuaki, F1 project leader and director of Honda R&D’s HDR Sakura Center, to act. Asaki petitioned the CEO of Honda R&D to deploy the new architecture power unit that had been developed for use in 2022 one year early. Asaki swore Honda couldn’t end its involvement with nothing to show for it. His passion impressed the CEO, who gave the green light to deploying the new power unit.

Even more pleased by the decision was Verstappen. To defeat Mercedes’ seven-time champion Lewis Hamilton, he had to have a power unit that rivaled Mercedes’.

“That’s something we need if we want to fight for the World Championship,” the driver had commented earlier. “I am really impressed with how Honda work. There is no limit, they will do everything for you. There’s a lot of potential there.” In the end, he would go on to state, this was the best engine he had ever driven. 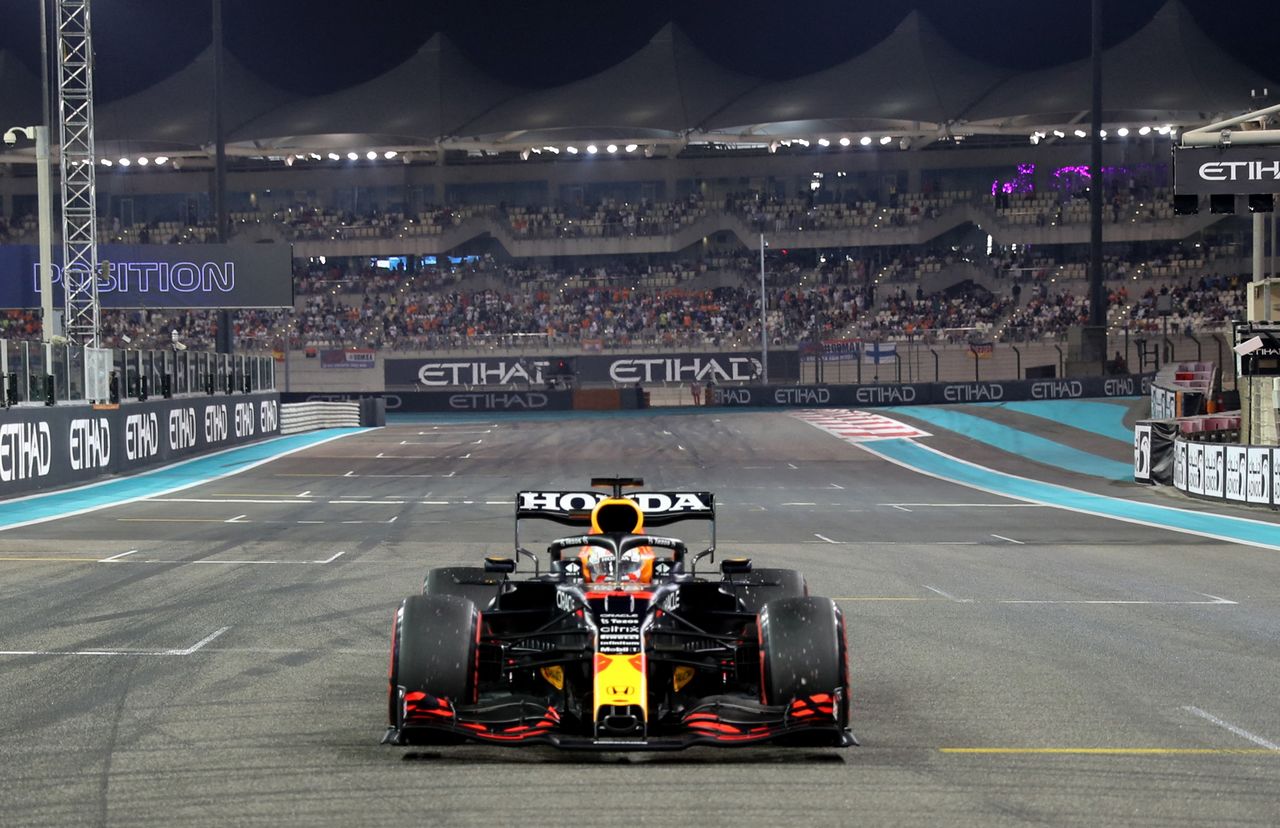 Verstappen powers down the home straight at the Abu Dhabi Grand Prix in December 2021. (© Reuters)

Verstappen’s assessment was not wrong. The Honda team won pole position for the opening Bahrain Grand Prix, held on March 26–28, a race held to be indicative in foretelling the outcome of the season. It was the first time that Honda had won pole position since 1991, when Ayrton Senna went on to win the championship. This augured well for the first Honda victory in 30 years.

Honda went on to win the fifth race, the prestigious Monaco Grand Prix on May 23, for the first time in 29 years, beginning a winning streak that continued through to the ninth race, the Austrian Grand Prix (July 2–4). It was the first time that Honda had won five races in a row since 1988, when they won 15 out of 16 races. Their performance made Japanese motor sports fans pray for what would be the first Honda victory in three decades.

Mercedes and Hamilton put up stiff competition, however, scoring three consecutive wins towars the end of the season in the nineteenth to twenty-first races the Brazilian, Qatar, and Saudi Arabian Grands Prix. As the racers headed into the final race in Abu Dhabi, Hamilton’s score was neck and neck with Verstappen’s. In fact, the 2021 Abu Dhabi Grand Prix marked the first time since 1974 in which the two leading teams went into the final race with equal points. The fierce battle between Verstappen and Hamilton that had played out during the season continued to the very end, with Verstappen regaining the lead over Hamilton in his final lap to become champion. 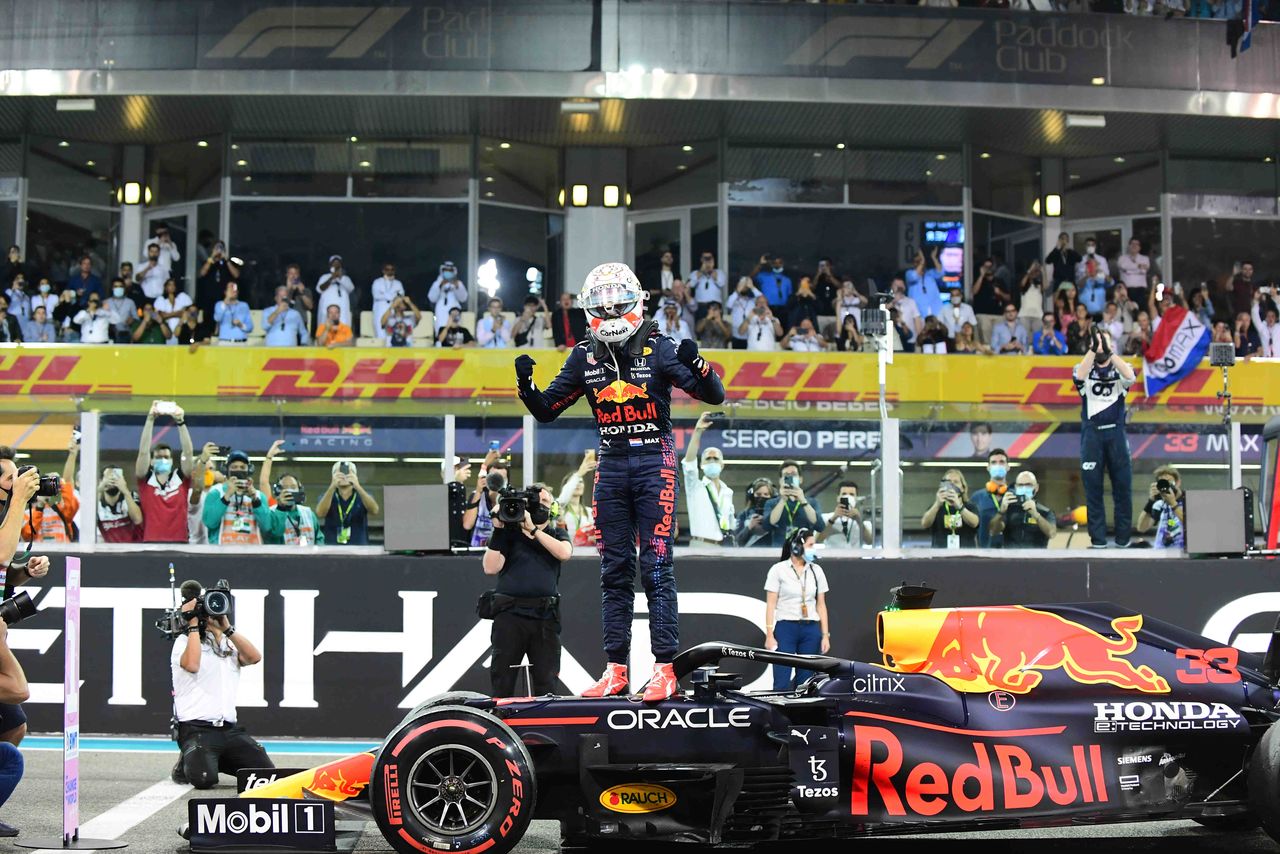 A jubilant Verstappen poses on his car after his final-lap victory over Hamilton on December 12, 2021, at the Abu Dhabi Grand Prix. (© Andrea Diodato; via Reuters Connect)

Their prayers answered, team Honda hugged and wept openly, vindicated at having avenged their record after a string of narrow defeats in the third era and satisfied at having overcome so many challenges in the fourth.

One member of the team was Honda F1 technical director Tanabe Toyoharu, who provided technical direction on the ground. A veteran employee, Tanabe lived through Honda’s golden second era with Williams and McLaren, only to experience defeat in the third era before seeing Honda become champion once again. Tanabe explains the significance of winning:

“At Honda, we aim to be top in every category in every race. However, we had not won an F1 championship since 1991. In the third era, in particular, we had absolutely no chance. The third era ended with our sole victory, that by Jenson Button at the Hungarian Grand Prix. By the time we had reentered competition in our fourth era, however, Formula One had transitioned to hybrid vehicles, and we saw a series of difficult races, but everyone tried their best. I believe that even if you don’t win, trying your best to win is important. This experience must benefit us in some way,” says Tanabe. 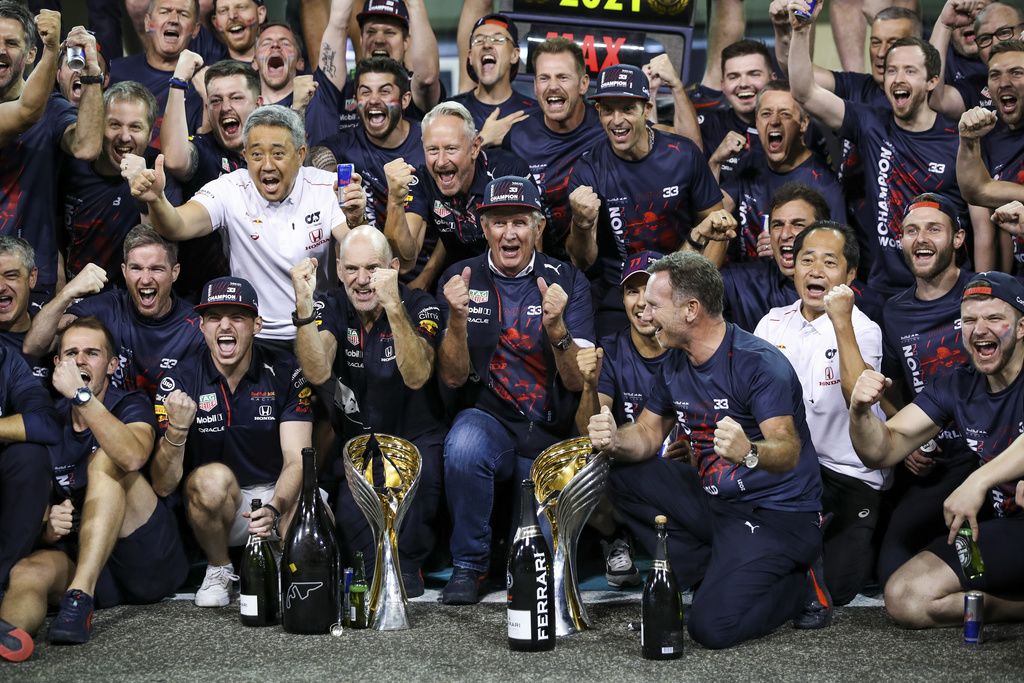 The Red Bull-Honda team after the December 12, 2021, awards ceremony at the Abu Dhabi Grand Prix; Honda F1 technical director Tanabe Toyoharu is on the right in white. (© DPA/Kyōdō)

Honda’s quest for Formula One victory ends here. Much of the team that worked on developing the power unit will now be posted to a new location to embark on a new mission: carbon neutrality by 2050, a goal articulated by CEO Hachigō Takahiro and the reason Honda pulled out of F1. Fans around the world wish the team success in their new pursuits while also hoping that they will one day return to Formula One to continue Honda’s glorious legacy.

(Originally published in Japanese. Banner photo: Max Verstappen, at right, holds up a Japanese flag after being declared champion at the Abu Dhabi Grand Prix on December 12, 2021. Alongside him is Red Bull racing motorsports advisor Helmut Marko, second from left, and Honda Formula One managing director Yamamoto Masashi, at left. © Getty/Kyōdō.)