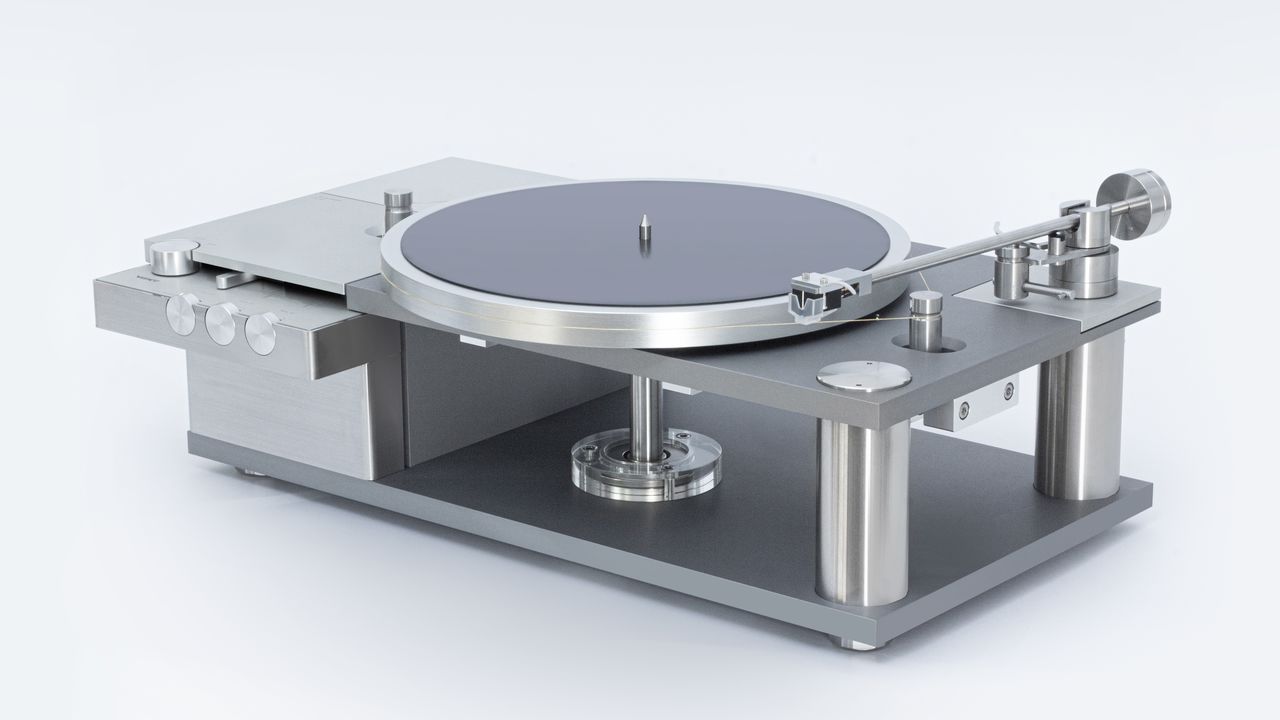 Adventures Behind the Wheels of Steel: Technical Workshop Turns to High-End Turntables 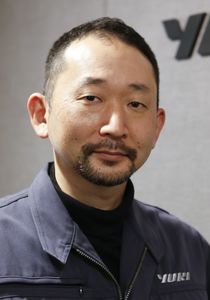 COO, Yuki Precision Co. Born in Ōita Prefecture in 1978. Did graduate studies in physics at Aoyama Gakuin University before joining the technical development section of major semiconductor manufacturer INX. Joined Yuki Precision in 2014, serving as head of development and R&D division director before assuming his current role. As a research student contributed to a paper on superconductivity in magnesium diboride that was published in the journal Nature in 2001, and in 2002 received the Superconductivity Science and Technology Award. His hobbies include audio equipment and classical music.

In June 2020, against the backdrop of an ongoing resurgence in the popularity of vinyl records, preorders opened for the AP-0 turntable, a device that even now remains the subject of considerable buzz among audiophiles.

Despite an eye-watering ¥2-million price tag, the AP-0 had critics purring─all the more remarkable given that Yuki Precision, the machikōba workshop behind its development, had no prior experience in audio equipment.

So, why did the firm decide to make the leap from precision components for aerospace, medicine, and other leading-edge fields to the unfamiliar world of audio? I spoke to the driving force behind the AP-0’s development, Yuki Precision COO Nagamatsu Jun.

“Because our focus as a company had always been simply producing components and devices in response to customer orders, we’d never previously developed a product of our own under the Yuki Precision banner,” he explains. “But there had long been a sense that we’d like to have our own original items to showcase our planning and machining capabilities. And the hope was that sending such an item out into the world could be a great source of new confidence for our employees.”

But a record player wasn’t the initial choice for such a project. “My previous role was with a semiconductor manufacturer,” says Nagamatsu. “So, my first idea was the creation of BtoB products to promote to other companies. But our staff didn’t really take to the project, and as a result, things didn’t go as smoothly as I’d hoped.”

And though initially perplexed by the lack of enthusiasm among his team, after lengthy consideration Nagamatsu finally realized what the project had been lacking: “Passion,” he admits. “I tried hard to explain the project to our team, but because even I wasn’t attached to the end result, I just couldn’t muster the necessary fervor to get them emotionally invested.” 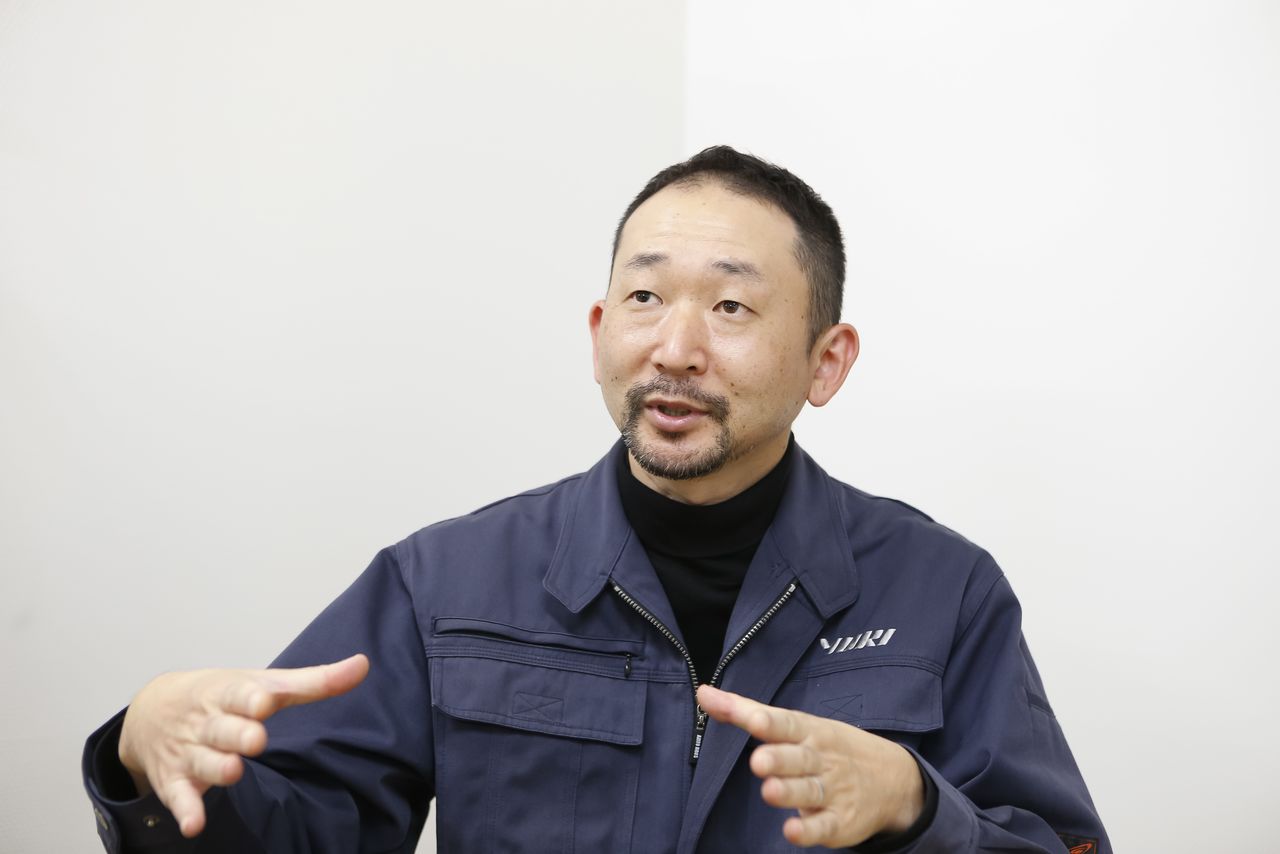 He racked his brains for a product that he himself would like to own. And, with a long personal history as an audiophile and classical music enthusiast dating back to his own elementary-school-age experiences listening to records on an old-fashioned console stereo cabinet, he soon hit upon the idea of a record player.

Finally equipped with the necessary motivation, Nagamatsu, at the time director of the R&D division, leveraged the leeway afforded to him by then-COO Otsubo Masato to move things forward behind the scenes.

He recalls: “In a small firm of just under forty employees, there’s always the question of how much time and labor you can justify allocating to any given project. But I still saw the merits of pushing ahead with this one, because simply sticking to what you know is always going to put a company like ours on the path to decline─especially when you factor in a shrinking domestic market. If you don’t branch out, you can’t grow, and I knew that Mr. Otsubo understood that too.”

Nagamatsu began by identifying three young engineers in their twenties and thirties who he thought might take an interest in the project. But after sounding them out in private, the initial response from these members of the postvinyl generation was lukewarm. “They all understood how a CD produces sound, but they had no idea how records worked,” he remembers with a chuckle. “Whereas I’m the complete opposite!”

Realizing that the way to inspire his staff was to show rather than tell, Nagamatsu invited the trio to his home to check out his impressive record collection and listen to his finely honed home stereo setup.

“They were amazed at how clear the records sounded,” he remembers. “That brought them on board, and the project could finally get underway. Young engineers love drawing up mechanical blueprints, and the novelty of the project only served to motivate them further. I just left them to it without saying too much about the designs they came up with.”

But, having found his coconspirators, Nagamatsu still made sure to remind them not to let slip their undertaking to Otsubo until the time was right. 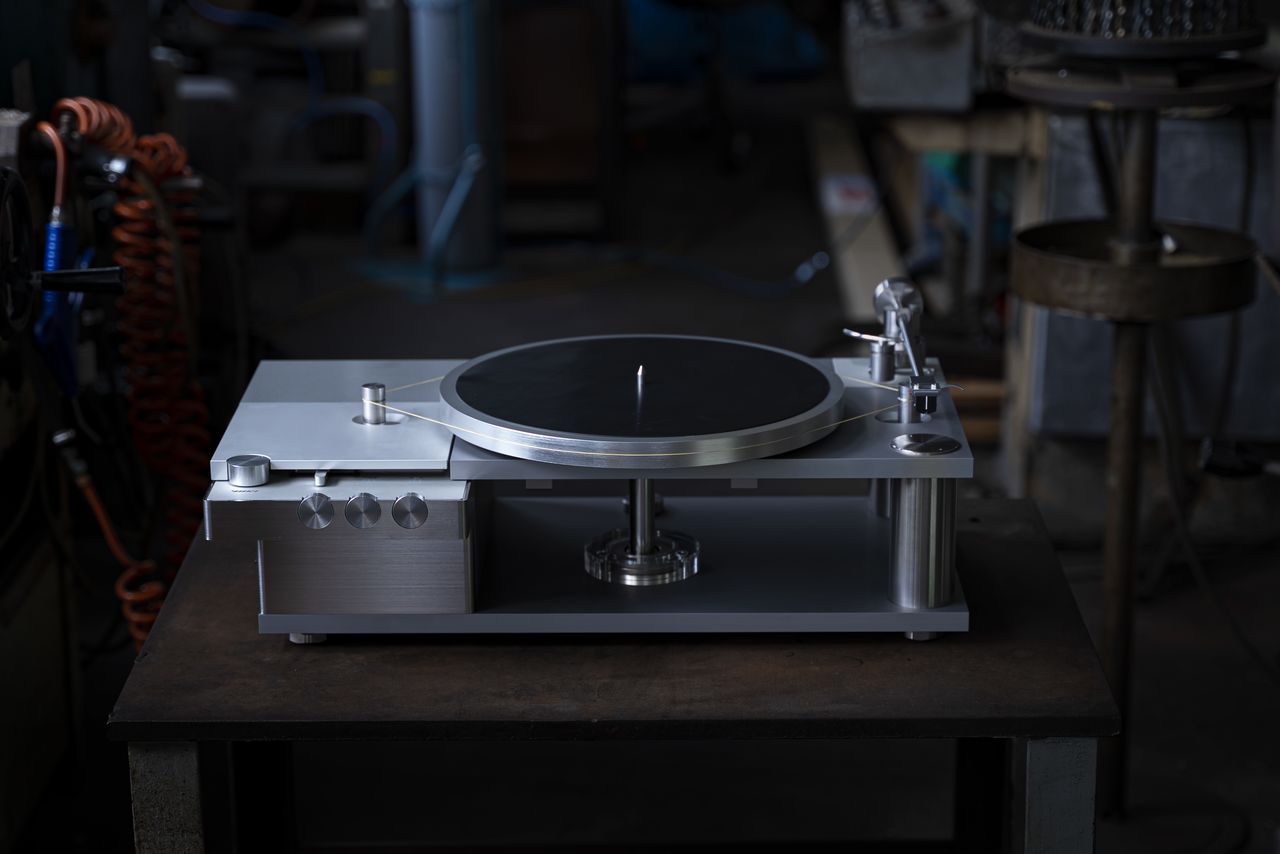 Prototype Only Half the Battle

In 2018, after a year of development, the team finally had a prototype ready to reveal to the boss.

“Unlike the final product, the prototype probably didn’t look like much,” Nagamatsu recalls. “But when we showed it to Mr. Otsubo his first response was, ‘So this is what you’ve been up to!’ He knew I’d been working on something, but he had no idea it was an audio device. He’s also a big music fan, so even though he’d been kept in the dark he was really delighted.”

With the COO’s blessing finally secured, the team pressed ahead with development. But, despite the existence of a completed prototype, there was further to go than they expected. Thorough testing and analysis of their designs revealed that the prototype lacked the necessary solidity to resist vibrations and keep audio feedback in check.

“We’d already devoted so much time to the project that the thought of having to do things all over was quite overwhelming. In the end it took another year and a half after completion of the initial prototype to rethink the design and solve the issues we’d identified.”

After two and a half years of development, the AP-0 was finally ready. And according to Nagamatsu, even by the standards of the audiophile world it is a rather unique beast. “It’s very different from a typical turntable,” he says. “There are all sorts of unique ideas and technologies built into various aspects. But perhaps the biggest innovation relates to the platter that the record sits upon as it rotates.”

The sound of vinyl records depends on a stylus capturing information encoded in the grooves inscribed on a record’s surface. But for years, audio manufacturers have grappled with the challenges of noise and lost sound quality caused by vibrations to the platter upon which the record spins.

“The only way to completely eliminate vibration is to situate the platter in midair, but of course in practical terms that’s impossible,” explains Nagamatsu. “But our engineers hit upon the idea of using magnets. By surrounding the platter with powerful magnets, you can induce it to levitate.”

The weight of the platter, however, means that even a powerful magnetic field is insufficient to completely cheat the laws of gravity. Nagamatsu’s team of engineers solved this with an arrangement that supports the rotating platter on a single spindle, much like a spinning top. 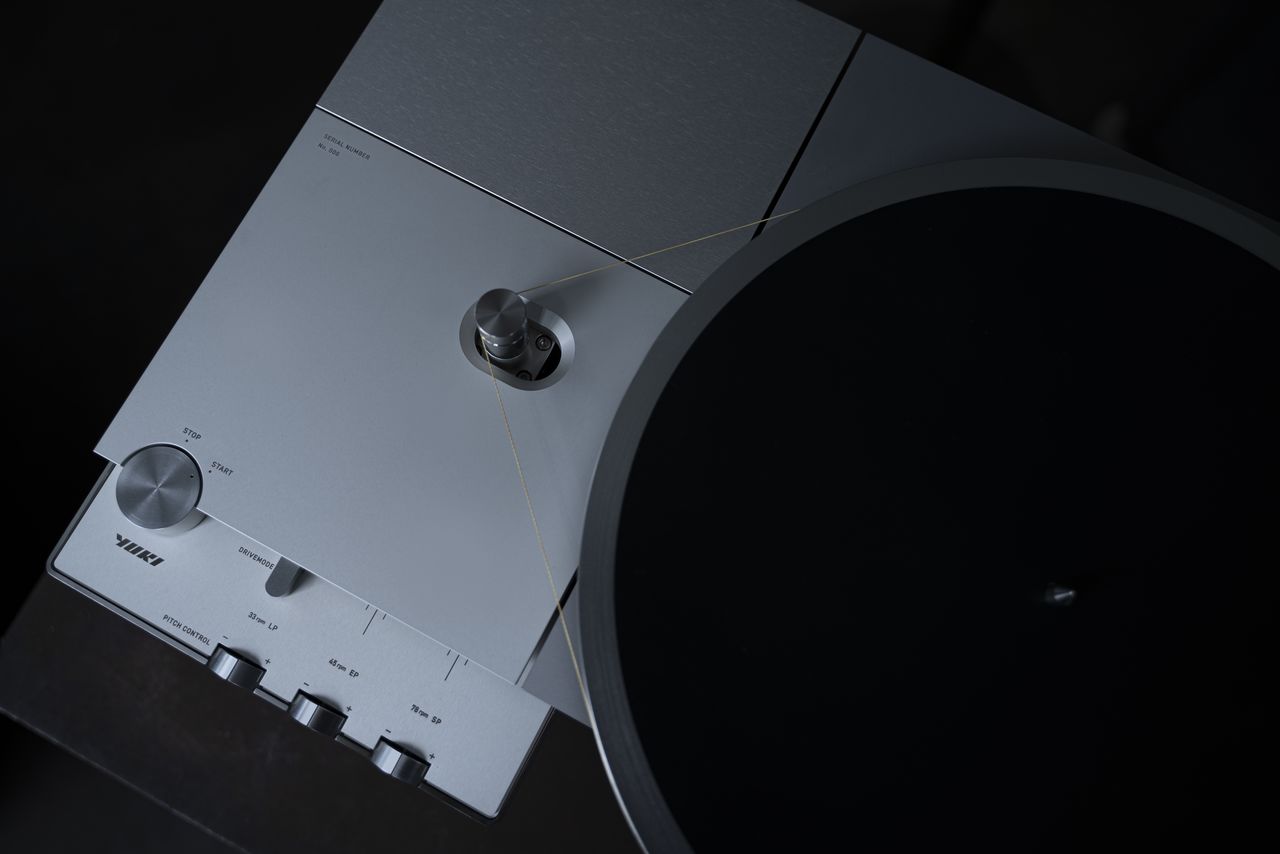 After the design’s completion, they discovered that major Japanese audio manufacturer Pioneer had actually secured a patent for a magnet-based turntable design as far back as 1981. But, with no evidence that this proposal ever got beyond the idea stage, Yuki Precision is the first manufacturer to have successfully put such a concept into practice.

“When we finally showed the AP-0 to the crew on the factory floor, they were really excited. Like, ‘Whoah, there’s that part I made!’ They never usually get the chance to see what becomes of the components they produce, so I guess it was quite a thrill to see our company’s parts go into a product under our own name.”

The response to this revolutionary turntable, produced by a machikōba with no prior experience in the field, far exceeded even Nagamatsu’s expectations.

“Because we’re primarily known for producing components, I was a little nervous about how this product would be perceived,” he confides. “But we got great reviews from audio experts, and even made the cover of various specialist magazines. Due to the pandemic, we haven’t been able to get out there and promote as I would have hoped. But we’re getting a lot of inquiries from both home and overseas, so we’re planning to take part in some international trade shows. I do think the AP-0 has become a showcase for the kind of high-end devices that Yuki Precision is capable of creating.”

So then, for Yuki Precision, the decision to move away from the familiar territory of leading-edge technology and plunge headfirst into the world of audio is already starting to pay off, in terms of both breaking new ground and boosting staff morale. And it all began from the fervent desire of COO Nagamatsu Jun to create something that he himself would want to own.

“We’re just a small machikōba. But, with flexible management, that small scale is precisely what allows us to take on bold new adventures like this. As long as I’m in this role I want to continue to develop turntables, and if possible, to make them into one of the pillars of our business. In many ways, I feel that’s our duty to the customers who have been kind enough to purchase an AP-0.”

And, according to Nagamatsu, with numerous staff members having contracted the audiophile bug themselves during the development of the AP-0, Yuki Precision now has endless reserves of enthusiasm to call upon when it comes to the pursuit of future updates!