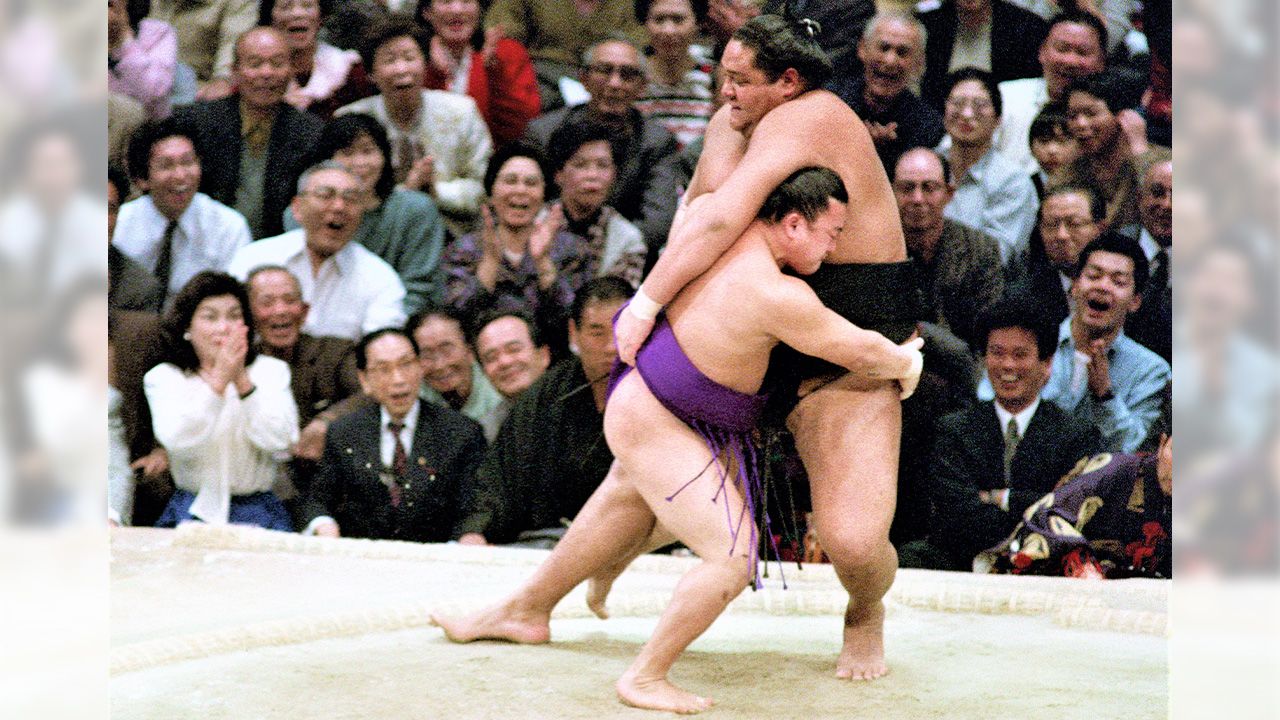 Exploring the Match-Winning Techniques of Sumō

Sports Culture History Feb 22, 2022
“Win by yorikiri for Terunofuji.” The sonorous tones of the gyōji, or referee, fill the sumō stadium and ringside seat spectators erupt in cheers. Read on to learn more about kimarite match-winning techniques and deepen your enjoyment of Japan’s traditional sport.

See the second part of this article: “Exploring Sumō: Unusual Techniques and the Sport’s Rising Stars“

Many Ways to Win

Kimarite winning techniques in the sport of sumō are the moves that decide which rikishi wins or loses a match. Although there are some rare disqualifying circumstances—such as isamiashi, or inadvertently stepping out of the ring while attacking, pulling on the opponent’s mage topknot, or fujōmake, when a wrestler’s mawashi loincloth becomes completely undone and leaves him exposed—in general, the rikishi who goes on the offense comes out the winner.

The announcer referee who sits near the ring makes a visual determination of the kimarite. If making an instant decision is difficult, the referee contacts an oyakata, or sumō elder, who has been watching the match from a separate location to ask for his input.

So where does 48 come from? That number has been used for centuries to denote something that comes in large numbers. Forty-eight is also believed to be an auspicious number. It seems to have developed a connection with sumō this way, so associations with the number are not entirely far-fetched.

In addition, there are many Edo-period (1603–1868) materials apportioning 12 techniques each to 4 types of movement—sori (backward bend), hineri (twist), nage (throw), and kake (trip)—which, when multiplied, give a total of 48. In reality, though, there are many more: A tome from the 1670s depicted 120 match-winning moves, and when those verbally transmitted by gyōji are added, the number can reach 300.

Starting in the latter half of the eighteenth century, benefit sumō matches, the precursor of modern-day tournaments, were held at the Buddhist temple Ekōin in Ryōgoku. This ukiyo-e by Utagawa Kuniyoshi (1798–1861) depicts a ring-entering ceremony. (From a Tokyo Metropolitan Central Library collection) 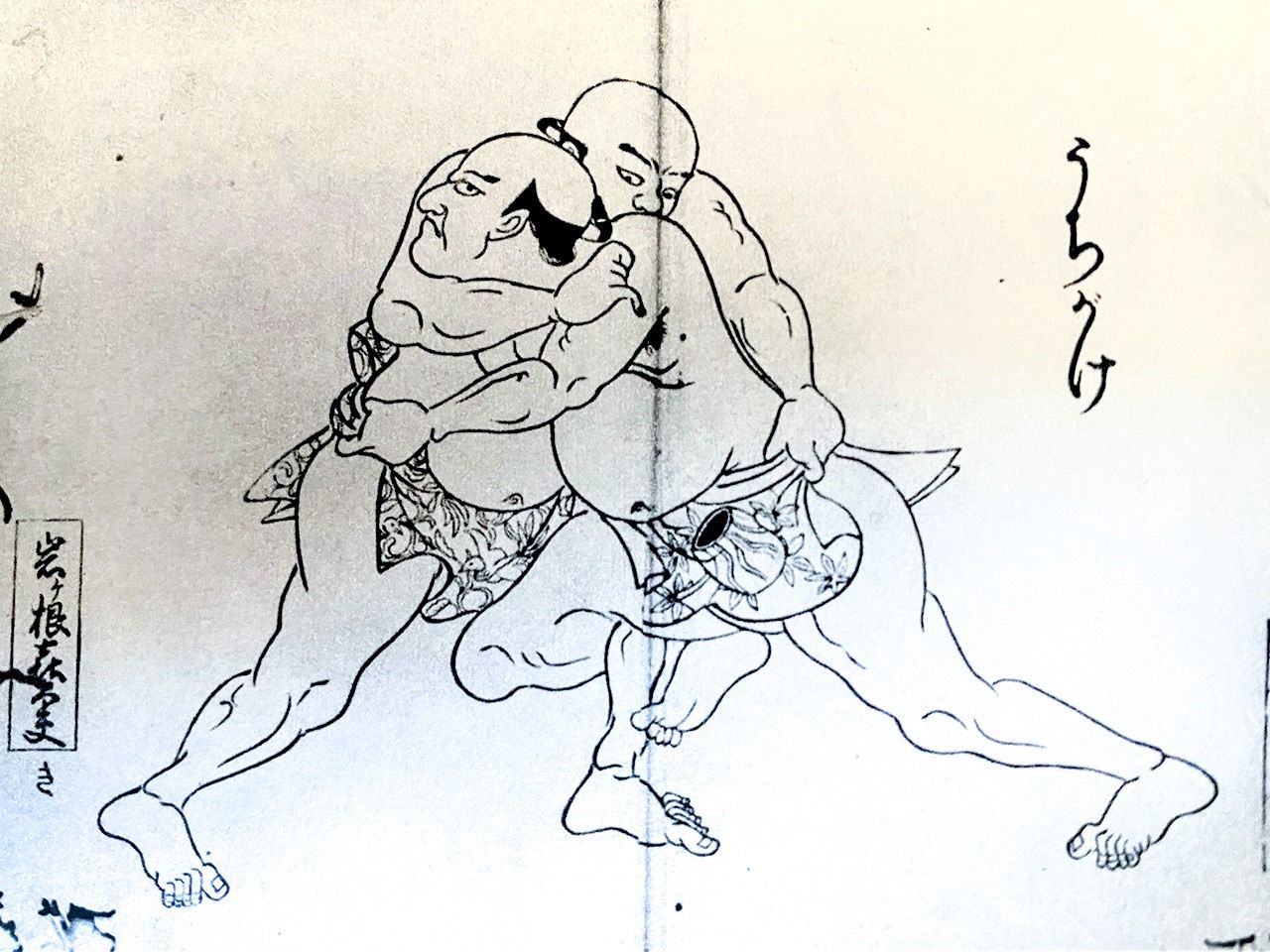 The uchigake inside leg trip, one of the 48 match-winning techniques, from an Edo-period book on sumō. (Courtesy Ōzumō Journal)

But sumō is tradition-minded, and up to the 1950s the JSA held to the official stance of 48 kimarite. That was simply window-dressing, though, as ring announcers blithely announced kimarite not on the approved list; those names even appeared on the wrestlers’ match tally sheets. Given this state of affairs, when referees had difficulty deciding which technique had been used to win a match, newspapers would often report conflicting information.

Some in the sport viewed this as a problem, and in May 1955 the JSA finally acted. A group led by the oyakata Hidenoyama (1911–1971)—formerly the wrestler Kasagiyama, who had risen to the rank of sekiwake—reorganized the hundreds of kimarite into 68 approved moves.

Many kimarite have evocative names, a few of which are described below. 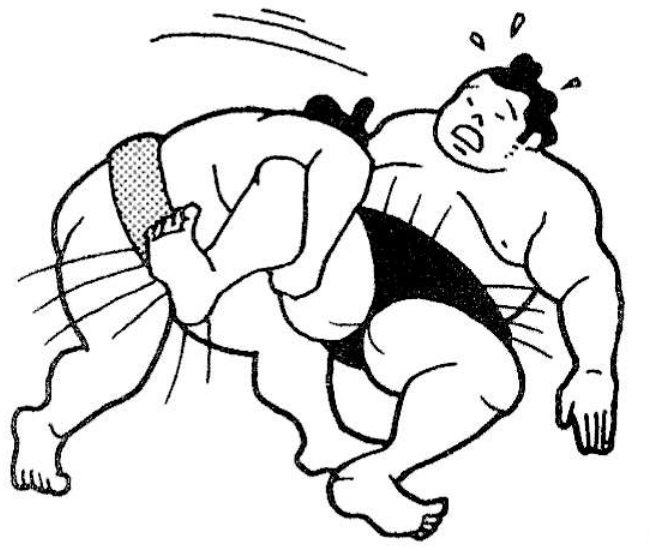 Komata-sukui (over thigh scooping body drop): After unleashing a throw, grabbing the inside thigh of the opponent’s near leg and lifting it to send him off balance. (Courtesy Ōzumō Journal) 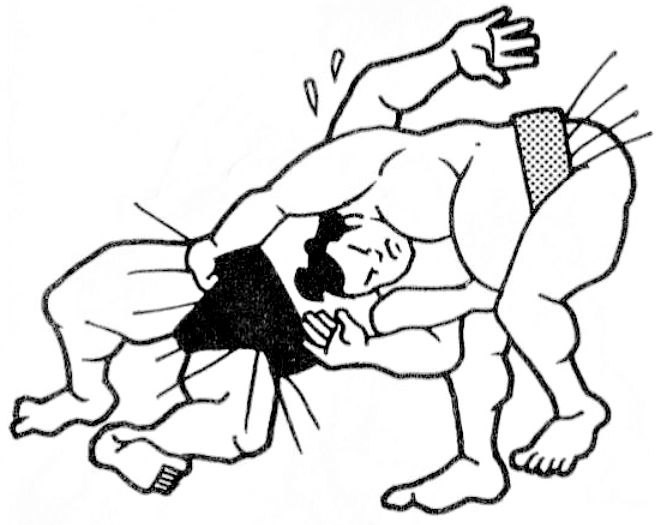 Zubuneri (head pivot throw): Placing the head against the opponent’s chest or shoulder and grasping his extended arm or elbow to pull him to the ground with a pivoting motion of the head. (Courtesy Ōzumō Journal) 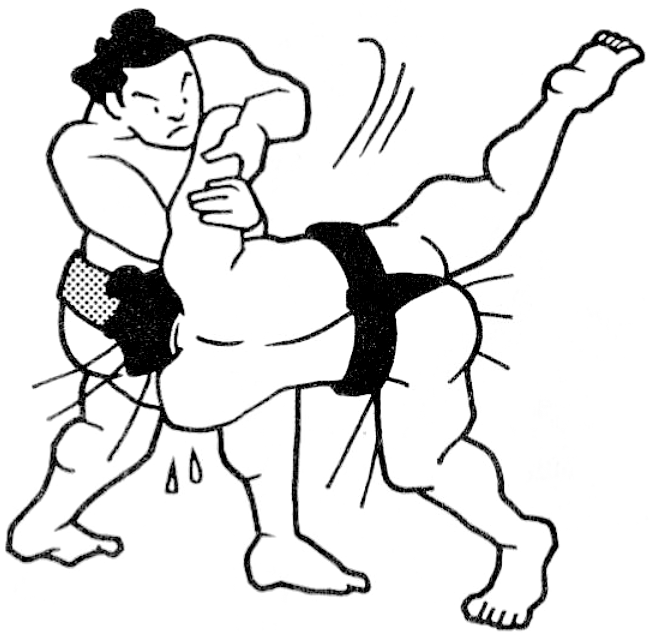 Amiuchi (the fisherman’s throw): Grabbing the opponent’s outstretched arm with both hands and pulling it to throw him backward, using a motion similar to casting a fishing net. (Courtesy Ōzumō Journal) 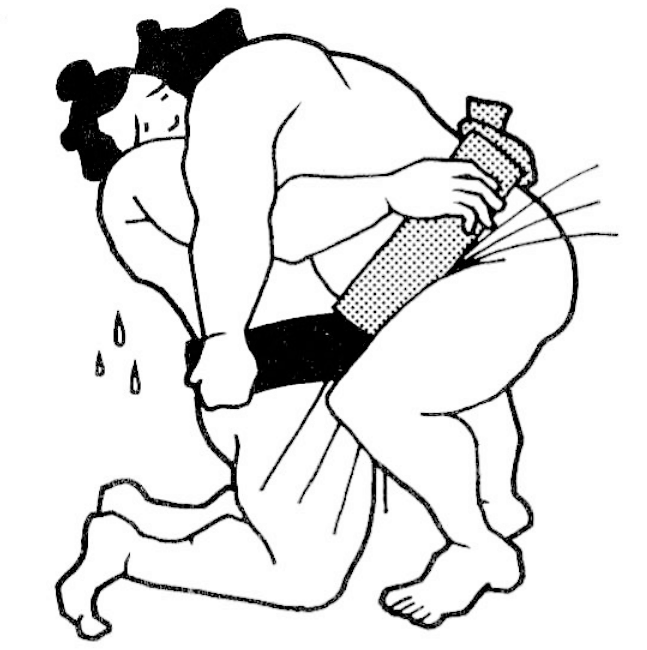 Sabaori (forward force-down): Grasping the opponent’s mawashi with both hands and forcing him down on his knees, making him look like a mackerel (saba) with its neck broken. (Courtesy Ōzumō Journal)

An additional two kimarite were added in January 1960, bringing the total to 70, when dashinage, a throw involving grasping the opponent’s mawashi, was divided into uwate-dashinage (pulling overarm throw) and shitate-dashinage (pulling underarm throw), depending on whether the wrestler got hold of his opponent’s mawashi over or under his arm to pull him forward and down. Two ways of losing—isamiashi (forward step-out) and koshi-kudake (inadvertent collapse)—were also added to the JSA’s official list.

The Edge of the Ring Is Key

Today, given the increasing bulk of rikishi—more of whom are now foreign-born—and the speed of the matches, it has gotten more difficult to apply many of the existing kimarite. In response, starting from the January 2001 basho, or grand tournament, the JSA adopted another 12 techniques, bringing the total to 82 on its official list. Another three ways of losing—tsukite (hand touch-down), tsukihiza (knee touch-down), and fumidashi (rear step-out)—were added at the same time. 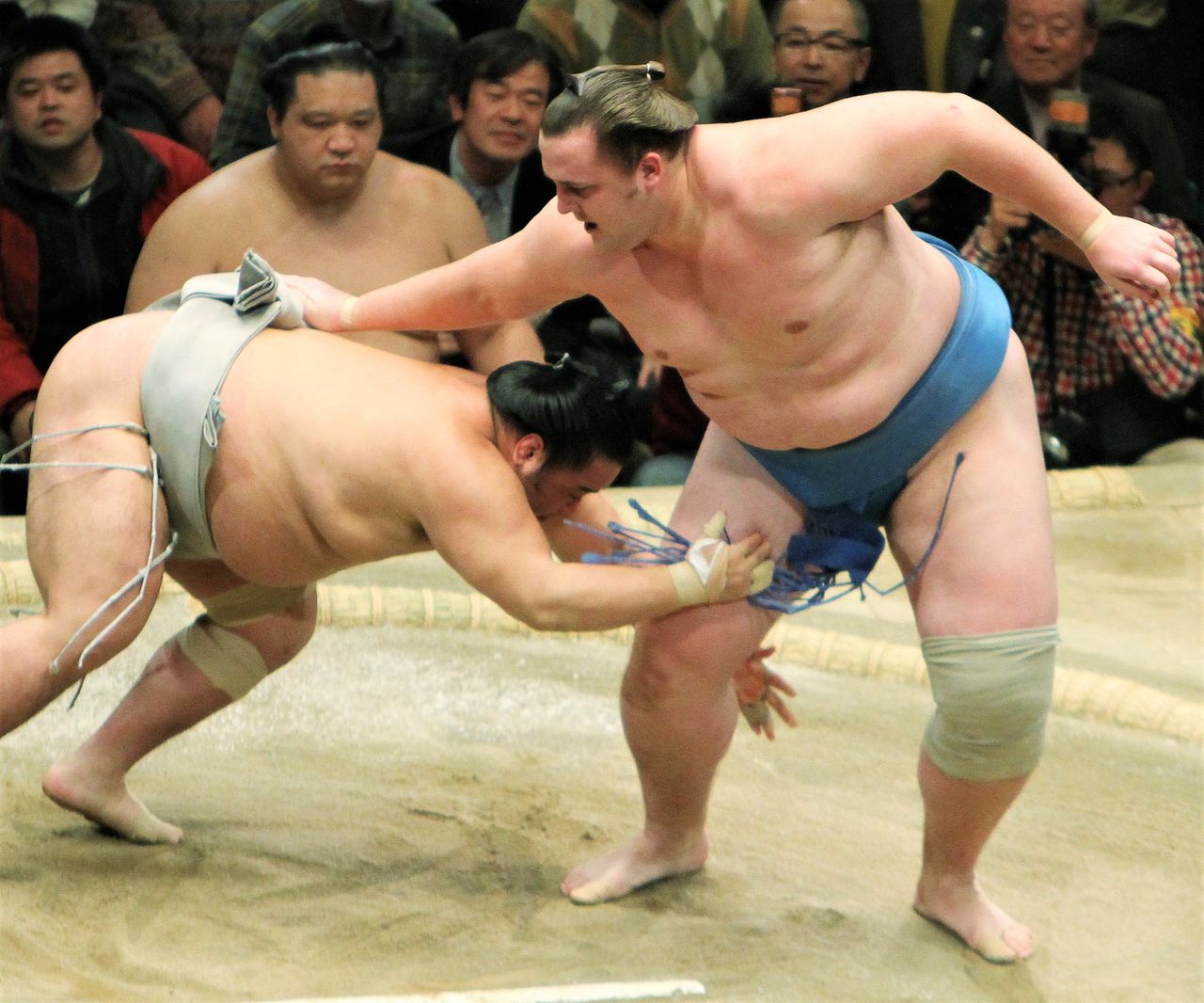 Ōsakate (backward twisting overarm throw): Reaching over the opponent’s shoulder to grasp his mawashi and throw him by lifting him off his feet. Estonia-born sekiwake Baruto (right) wins his match against Kakizoe using this unusual kimarite on the fourteenth day of the 2010 January basho. (© Jiji) 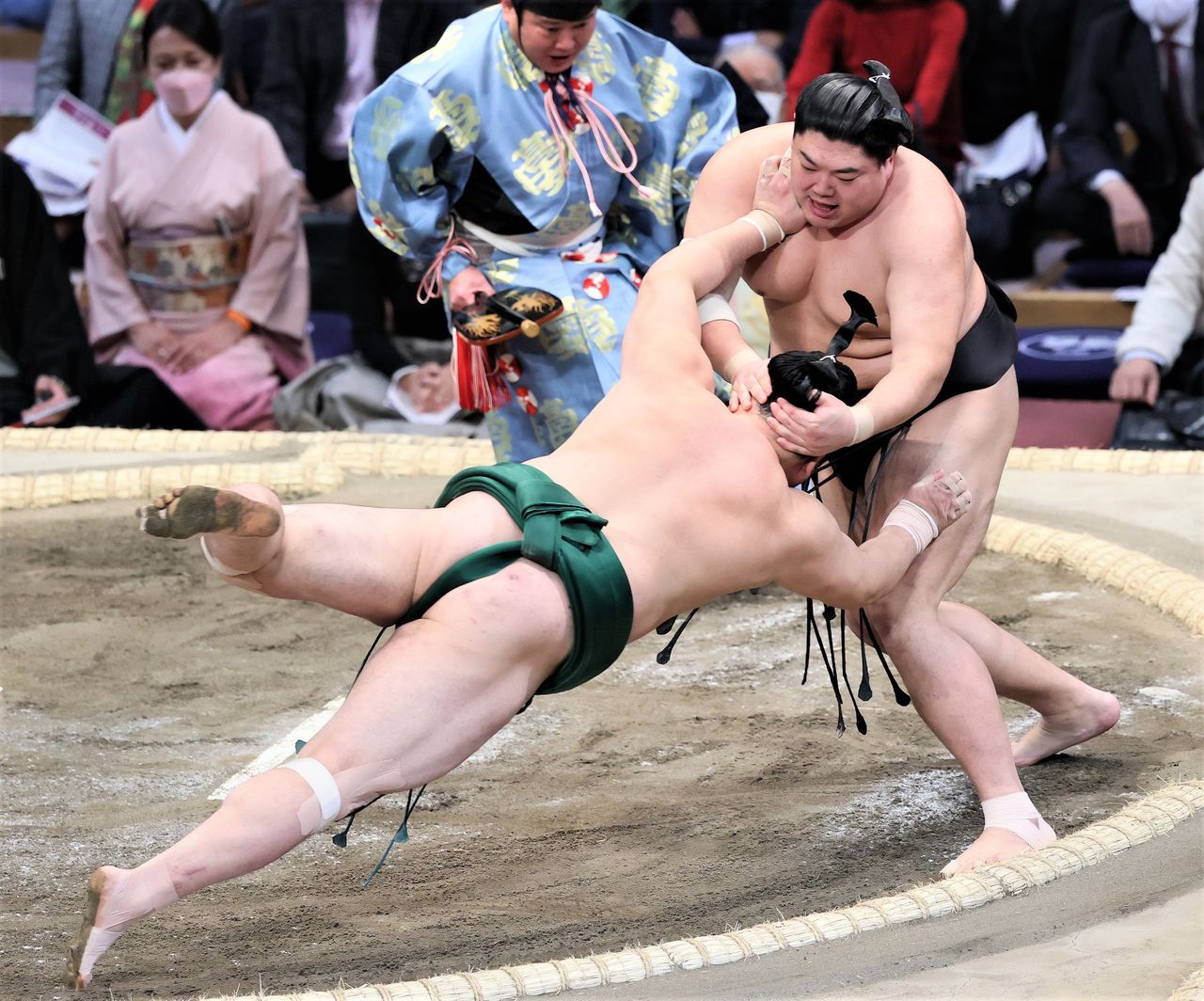 Tokkuri-nage (two-handed head twist-down): Using a pincer motion, Abi (right) grasps Satanoumi’s head and neck in both hands to force him down on the sixth day of the November 2021 basho. The name of this kimarite comes from using one’s thumb and forefinger to grasp the neck of a tokkuri sake flask. (© Jiji)

The rules of sumō state that a wrestler loses when any part of his body above the feet touch the dirt of the ring, or when he touches the ground outside the ring—which is relatively small, at just 455 centimeters in diameter. Although there are now 82 kimarite, 60% of the time a win is achieved by pushing the opponent out of the ring using yorikiri (frontal force-out), oshidashi (frontal push-out), yoritaoshi (frontal crush-out), and oshitaoshi (frontal push-down). Another 15% of the time, moves like hatakikomi (slap-down) and tsukiotoshi (upper torso push-down) are used to force the opponent to the ground.

Unusual or surprise moves that sumō audiences may encounter once in a lifetime, if at all, give unexpected joy. Even if not used in matches between upper-ranking wrestlers, such kimarite offer dedicated fans a thrill. Here are a few examples.

This so-called three-point attack involves wrapping a leg around the back of the opponent’s leg from either the inside or the outside while grabbing his opposite thigh and pushing his chest with the head to force him down backward. In the 1950s, jūryō division fighter Nachinoyama won four matches using this move. No one had attempted it since then, but Mainoumi (who rose to the rank of komusubi), a diminutive wrestler known for his extensive repertoire of surprise moves, brought it back into the spotlight.

On the eleventh day of the 1991 November basho, Mainoumi was fighting Akebono—the highest-ranked yokozuna, standing 33 centimeters taller and weighing 100 kilograms more—for the first time. The excitement in the air was palpable even before the face-off, and Mainoumi did not disappoint. Rising tall in a feint before jumping into Akebono’s chest, he did quick work of knocking him over.

It was a scene reminiscent of David and Goliath, and yet the JSA disappointingly stated that the match had been won by uchigake (inside leg trip), declaring that Mainoumi had let go of the hold that would indicate the three-point attack. Undeterred, Mainoumi went on to win with mitokoro-zeme against Kotofuji on the thirteenth day of the September 1992 basho and again in September 1993 against Tomoefuji.

Few rikishi after Mainoumi attempted to replicate his totally unexpected moves, but 26 years after his feat, Ishiura (172 cm/118 kg) pulled off a mitokoro-zeme against Nishikigi (185 cm/166 kg) on the eighth day of the November 2019 basho. 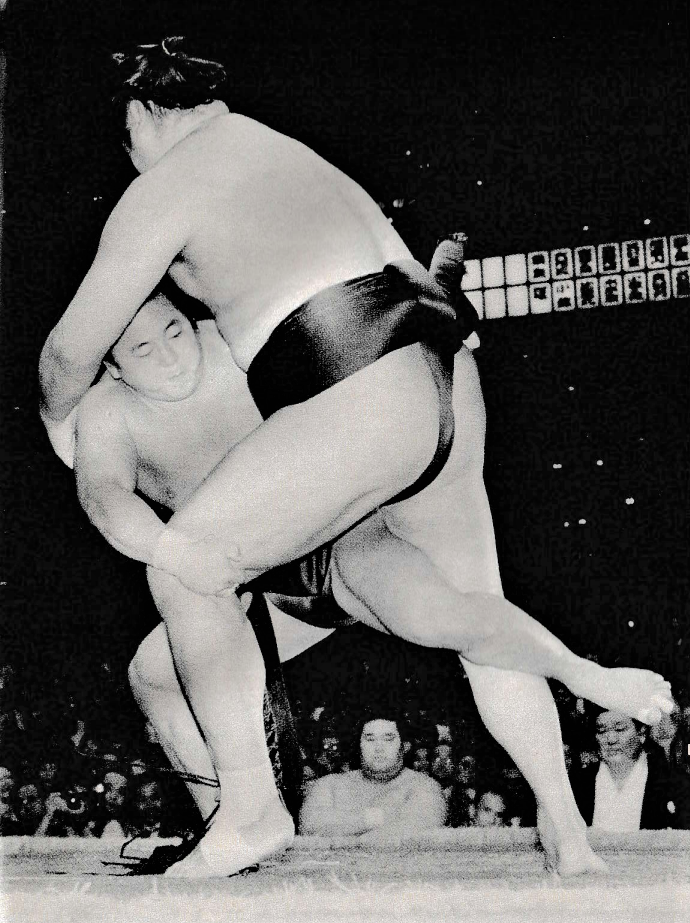 Diminutive Mainoumi (172 cm/96 kg), pitted against behemoth Kotofuji (192 cm/146 kg), pulls off a win with a mitokoro-zeme at the September 1992 basho, a first in the makuuchi division since the May 1955 basho when kimarite began to be announced. (Courtesy Ōzumō Journal)

Uchimusō (inner-thigh-propping twist-down), a twisting takedown with the hand on the opponent’s inner thigh, is a kimarite seen at practically every tournament, but the sotomusō move is quite rare. In that move, the rikishi on the offense places his hand on his opponent’s outer thigh, twisting him down while lifting his arm. The opponent may come crashing down onto the attacker, but when the move is successfully executed, the opponent is flipped onto his back in a curving motion.

Since the creation of the official list of kimarite, only 12 makuuchi division matches have ever been won with sotomusō. Futagodake (whose highest rank was komusubi) won five matches with sotomusō around 1970, and Kyokushūzan (who also rose to komusubi) did so three times in the late 1990s. The two practically had a monopoly on this kimarite. 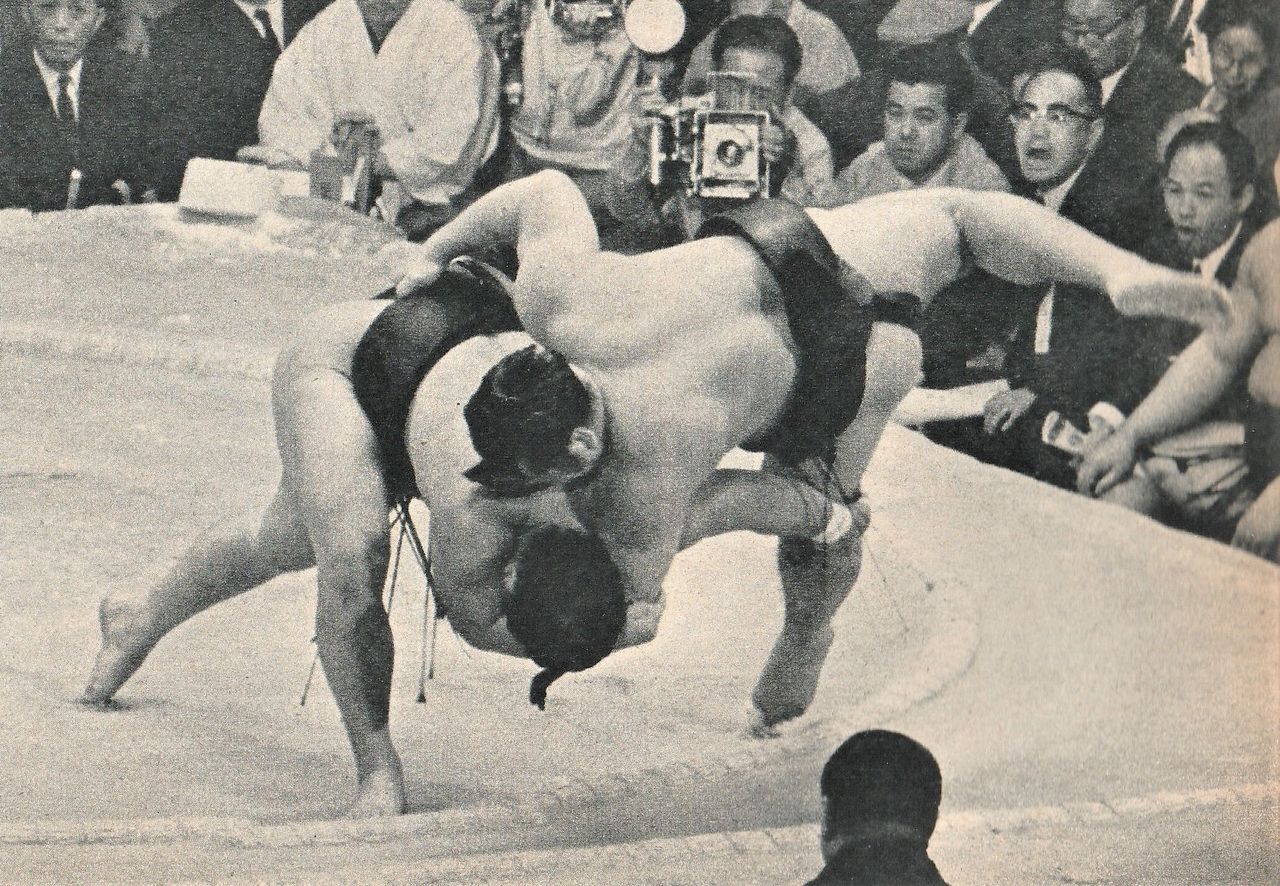 This is a spectacular move where the rikishi grabs his opponent’s mawashi, lifting him up by placing a leg on the inside of his thigh, and throws him down on his side.

Hajimayama (who rose to sekiwake) and Tsunenishiki (maegashira) were especially proficient with yaguranage. In the 1950s and 1960s, it was the kimarite in 18 makuuchi division matches, so in those days it was used from time to time.

In later decades the use of yaguranage faded away, but perhaps the most spectacular example of this kimarite came on the eleventh day of the March 1972 basho, at the match between ōzeki Kotozakura (who later rose to the rank of yokozuna) and maegashira Takanohana (later ōzeki).

Takanohana had both hands on Kotozakura’s mawashi and had forced him the edge of the ring when Kotozakura twisted left. Despite Takanohana having his leg on the outside of Kotozakura’s leg, he put his left leg into Takanohana’s inner thigh and lifted him up, sending the comparatively lightweight Takanohana flying. 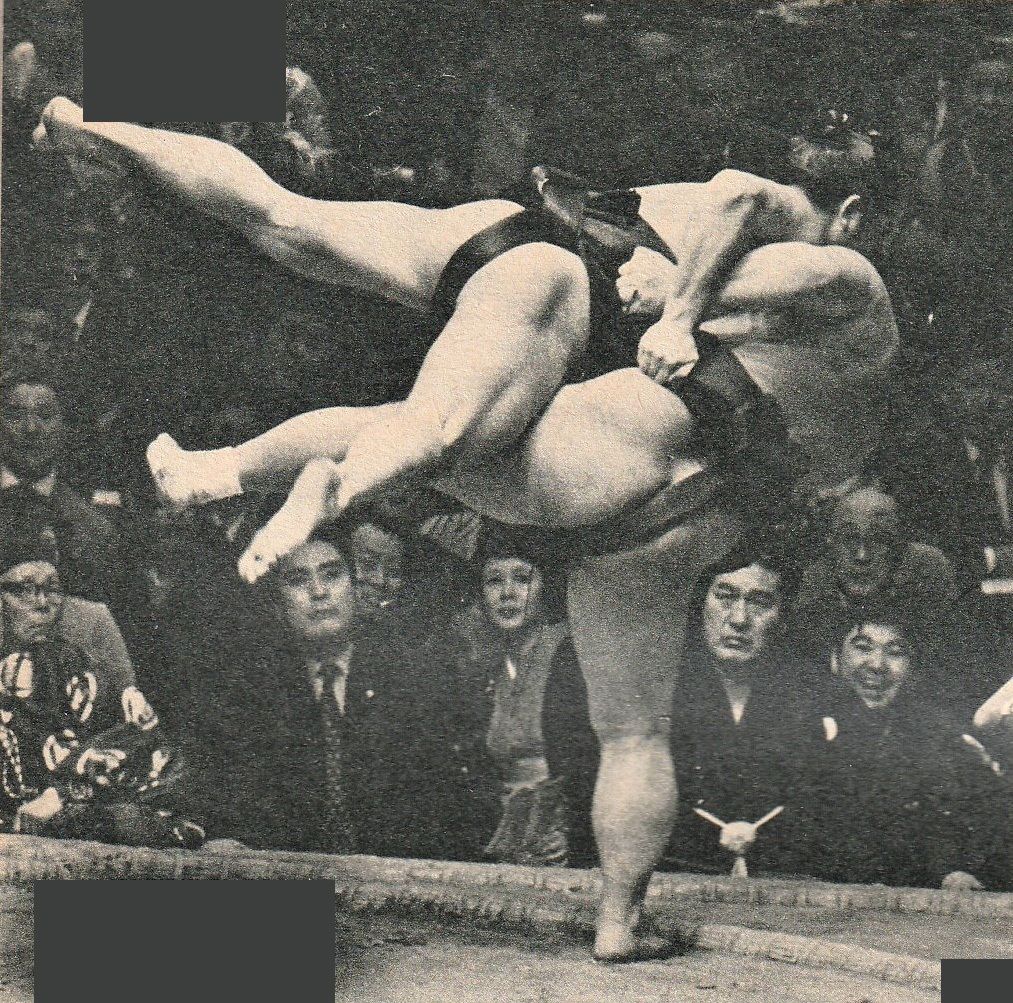 Yaguranage requires tremendous lower-body strength. It was not seen in tournaments for decades after Aobayama used this kimarite on the ninth day of the November 1975 basho, partly because of wrestlers’ lack of lower-body training and also because they are much heavier nowadays. In more recent times, yokozuna Asashōryū resuscitated the move after 34 years when he won against ōzeki Harumafuji on the thirteenth day of the July 2009 basho. 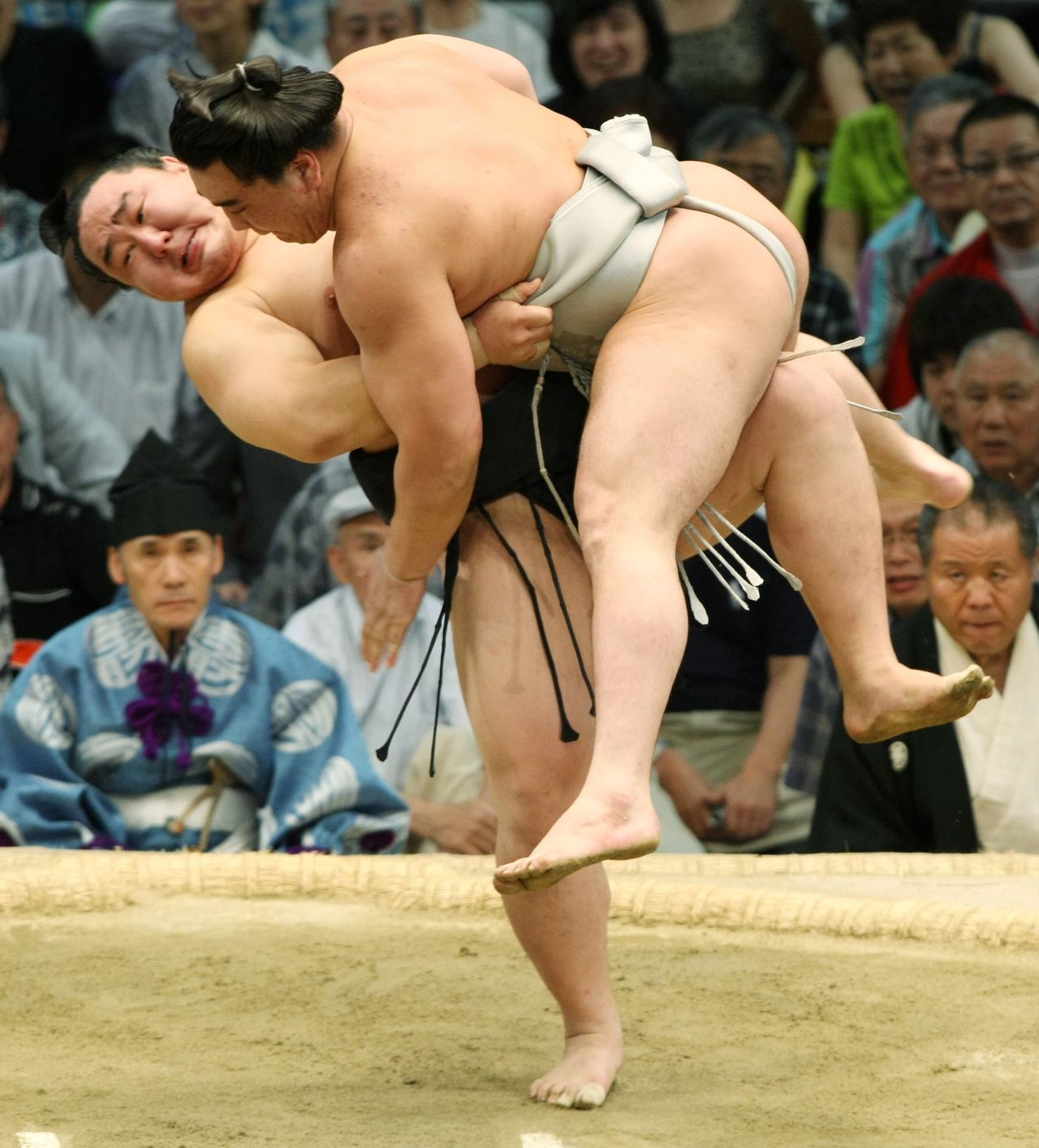 At the July 2009 basho, Mongolia-born Asashōryū (left) lifts Harumafuji atop his leg and, using a left upper arm throw, pulls off a yaguranage. Interviewed after the match, Asashōryū said that the move was the same as one used in Mongolian wrestling, and that he had been planning for a while to use it. (© Jiji)

This kimarite has only been seen once since then, when yokozuna Hakuhō, who also hails from Mongolia, won against Okinoumi on the seventh day of the November 2015 basho. Okinoumi was attempting a push-out that took Hakuhō to the edge of the ring when Hakuhō bent backward and stood on his left leg while picking up Okinoumi on his right knee and sending him crashing.

Those matches certainly highlighted the stupendous physical abilities of the two Mongolia-born yokozuna, but the day may come again when native Japanese wrestlers successfully execute the move.

In the next part of this feature, I will focus on super-rare kimarite which, while on the official list of match-winning moves, have never been used in tournaments, and also shine a spotlight on some of today’s rikishi known for their exceptional skills.

(Originally published in Japanese. Banner photo: Mainoumi’s kaleidoscopic range of moves electrified fans. His match against Akebono on the eleventh day of the November 1991 basho was one for the sumō history books, and ringside spectators looked on in unabashed delight. © Jiji.)