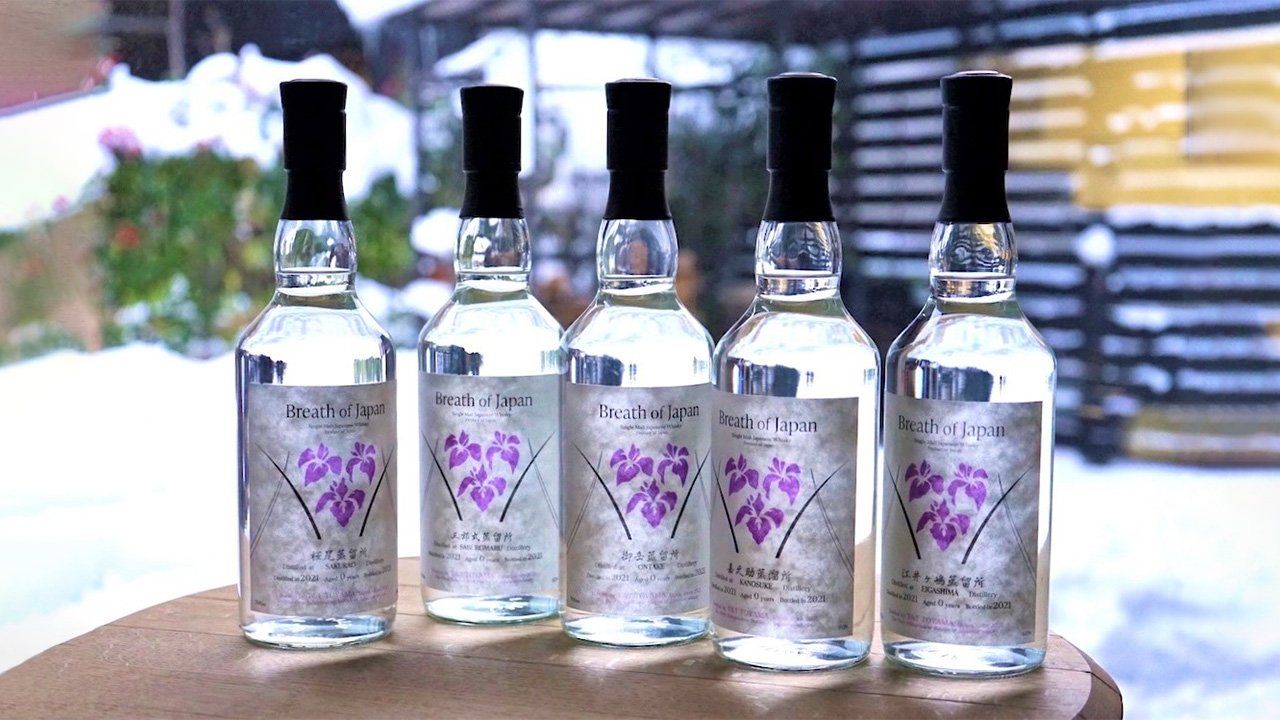 Culture Food and Drink Economy Society Apr 28, 2022
Japanese whisky is enjoying unprecedented popularity, both at home and abroad. Exports increased 70% year-on-year in 2021, with overall sales reaching ¥46.2 billion. However, the business can be risky, with huge up-front investment required to build a distillery and delayed returns due to the need for aging before product sales. A look at an independent whisky bottler in Toyama Prefecture looking to change this status quo.

A whisky magazine recently ran an article that opened by saying that Japanese whisky’s progress is unstoppable. Japan’s domestic whisky exports topped sake in 2020, and in the past five years the number of domestic distilleries has increased fivefold—counting those still in the planning stages, that number is set to hit 70 this year. In February 2021, the Japan Spirits & Liqueurs Makers Association made headlines by establishing standards for use of the term “Japanese Whisky” on labels, as well. Not even the COVID-19 pandemic has stemmed the tide.

Bottlers buy unaged “new-make” spirit or aged whisky from a distillery, often age or finish it themselves, and bottle it for sale under their own label. Scotland, the inspiration for so much in Japanese whisky, is home to many such companies, and they have played a vital role in the Scotch industry. But Japan has not had a single one—until now. There have been companies partnered with international distilleries to bottle Scotch for the Japanese market, and others that have purchased old stock from now-defunct distilleries for bottling and sale, but none that have worked in direct partnership with working distilleries to mature and bottle whisky independently. 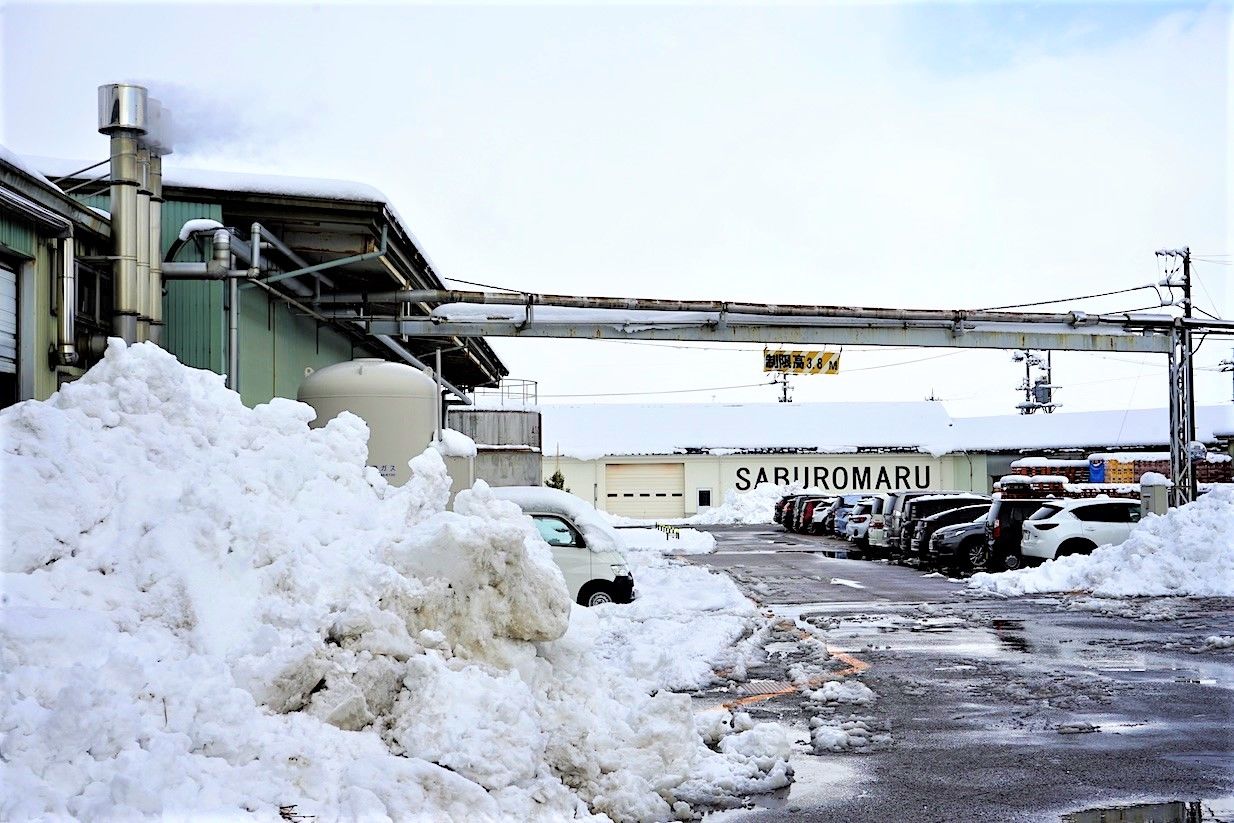 I trudged through the piled snow to the office where Inagaki Takahiko and Shimono Tadaaki waited. Inagaki is the fifth-generation blender at the venerable Wakatsuru Shuzō sake brewery, the distillery’s owner. Shimono manages the single-malt retailer Maltoyama and is the first Toyama citizen to be certified as a Whisky Professional.

“The company name, T&T Toyama, uses our given names’ initials,” Inagaki explains, somewhat shyly, and explains that they were inspired by famous Scottish bottlers Gordon & MacPhail, commonly known as G&M. Shimono serves as the CEO, while Inagaki calls himself a partner.

The bottlers’ story goes back to 2016. In June of that year, Inagaki happened to stop by a booth that Shimono was running at an Osaka whisky event. Inagaki had just quit his IT company job to return to his family business, and Shimono had coincidentally visited Saburōmaru Distillery just three years before.

“The TV news featured Saburōmaru as the prefecture’s only whisky distillery, so as a professional I went to pay a visit. That was right about when Japan’s whisky industry was regaining steam,” says Shimono.

However, when he visited, Saburōmaru was far from at its best. The building was falling down, and they weren’t using copper whiskey pot stills, but ones made for shōchū distillation. Wakatsuru Shuzō had started making whisky in 1952. However, it had always been a side business subordinate to the main work of brewing sake. Shimono was disappointed, feeling that the company could make much better whisky with the proper facilities. He wanted to communicate that to the management but had no direct contact. But then, three years later, the management came walking up to him.

As soon as Inagaki joined the family business, he set about improving the distillery with all haste. He had the building rebuilt and was updating equipment piece by piece. One item in particular attracted attention in the industry: the copper pot still called Zemon, developed in cooperation with local copper foundry Oigo Seisakusho, known for making bonshō bells for Buddhist temples.

Conventional pot stills are hammered into shape from copper sheet metal, but Zemon was cast from molten copper and tin poured into molds. The resulting thicker metal means that it has much longer durability than traditional stills, and has also contributed to improved spirit flavor, making it a groundbreaking development for both aspects of the business. “I think the current level of Saburōmaru’s new make is quite high among Japan’s craft distilleries,” says Shimono. 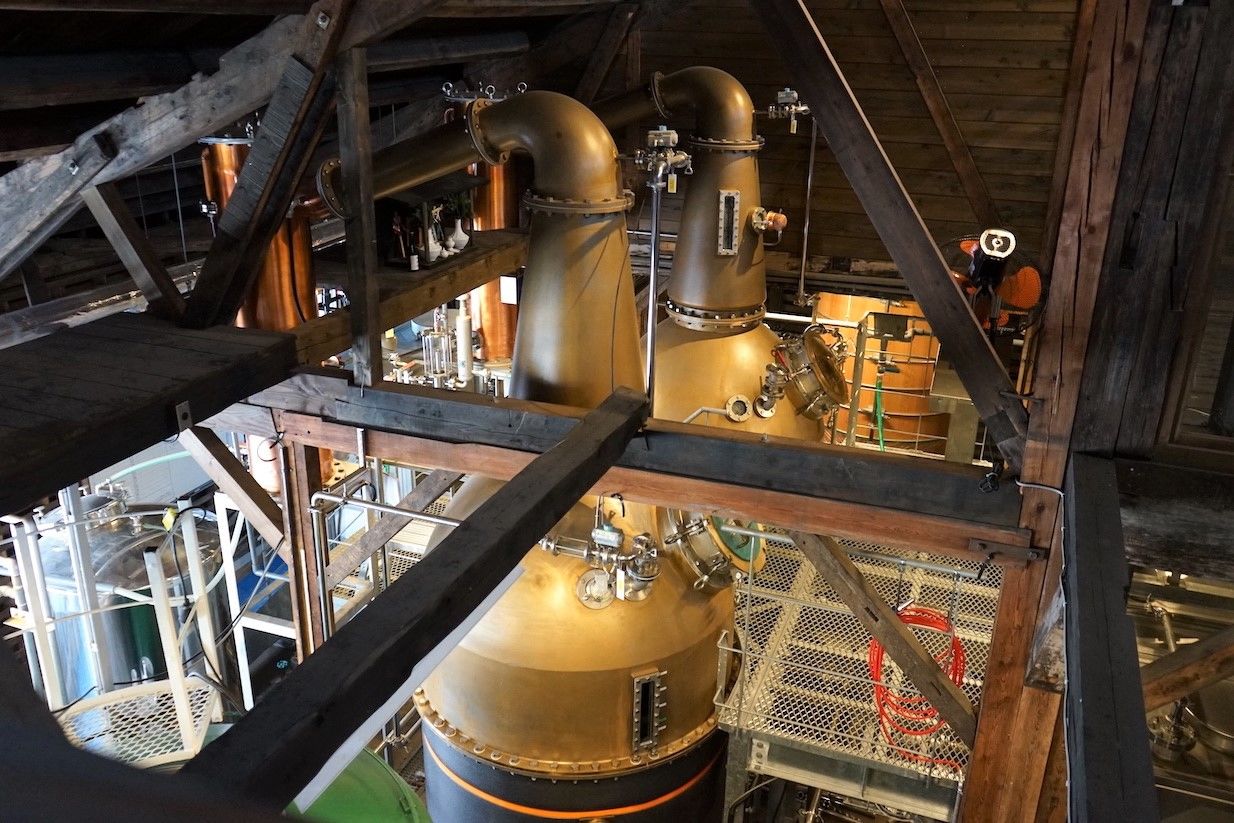 The two went to Scotland on an observation trip in October 2019 and visited 20 distilleries there. However, their goal was not just distillery tours. Inagaki says, “We wanted to see the entire process, including cooperage, malting, grain whisky production, bottlers, everything.”

Bottlers’ Advantage in a Risky Industry

The Japanese whisky industry might be “unstoppable,” but at the same time there are chinks in its armor. For example, there is only one independent barrel-making cooperage in Japan. The only maltsters, where barley is made into the essential ingredient for malt whisky, are owned by the major companies. The same is true of distillers making the grain whisky needed for blends.

Japanese whisky as a class was created by Nikka’s Taketsuru Masataka and Suntory’s Torii Shinjirō, and the path they set means that each distillery handles every step of the process in house, from start to finish. However, in some ways their precedent has held the industry back.

Estimates put the cost of starting a new distillery at around ¥1 billion, and since whisky must be aged in barrels for at least three years before it can be sold as such, it takes at least that long to begin recouping the initial investment. That financial risk is an enormous barrier to newcomers, and since the major players have kept everything in house, there has been little chance to exchange information or staff and ease the way.

Inagaki and Shimono recognized and shared worries over the fact that even with the boom, Japan’s whisky industry remains fragile. Their observations of the Scotch industry demonstrated that it was a divided and multilayered business. They felt that this helped the entire industry become stronger and more flexible.

“We discussed how we could make Japanese whisky into a global industry, rather than letting this popularity end up a temporary fad. We both felt that starting a bottler would be a good start,” says Inagaki. Inagaki, immersed as he was in the IT industry, seems to have taken on the idea of a sharing economy as a given. The Scotch industry’s structure, rooted in a spirit of coexistence and shared prosperity, struck him as something that should be obvious.

“Bottlers handle maturation and sales, while distillers can earn some quick cash by selling part of their new make spirit, allowing them to focus more on production and invest in new projects. That creates a virtuous cycle helping to improve spirit quality. Official bottlings and those from bottlers age in different casks, and thereby can easily double the variety of whisky available,” Inagaki says. “I think that’s really attractive to whisky enthusiasts. Distilleries can also demonstrate how aging the same spirit in different environments impacts variation, allowing a better grasp of the spirit’s innate character, which is another benefit for them.”

This situation offers the rare chance at a “win-win-win” situation for distillers, bottlers, and enthusiasts alike.

“In the single-malt Scotch world, even unknown distilleries can become popular with enthusiasts after a bottlers’ release,” Shimono adds. And just as with flavor, the more multilayered distribution becomes, the better. 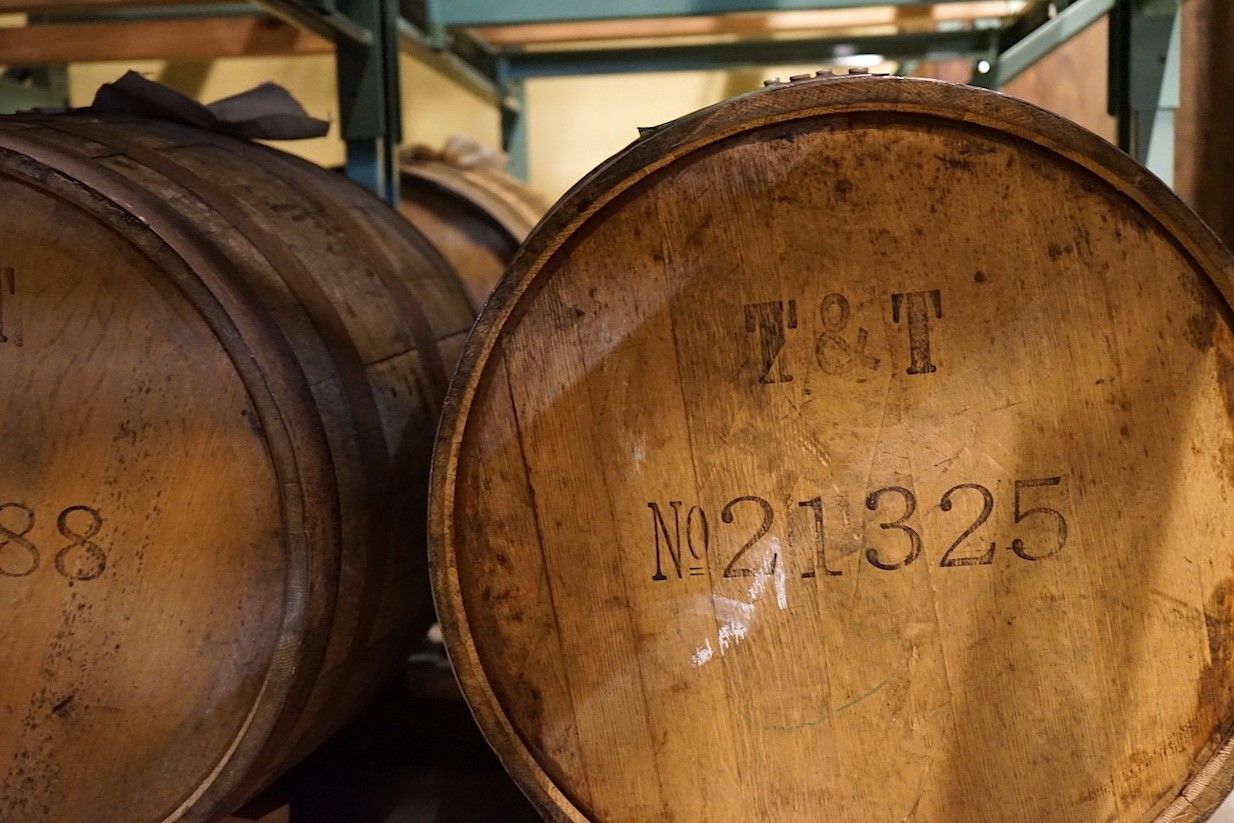 Whisky maturing in casks. The wood and design used can help add a different character from official bottlings.

Time Has Come for Bottlers

The company gathered initial funding for the bottlers through crowdfunding. Their initial goal was ¥10 million, but in the end, they collected over ¥40 million. High expectations from industry professionals and enthusiasts both contributed to the crowdfunding success.

The two founders of T&T Toyama traveled to craft distilleries across Japan to discuss their project and source new-make spirit to work with. They received support from many distillers, and they ended up selecting spirit from six distilleries in five prefectures to barrel: Eigashima in Hyōgo, Osuzuyama in Miyagi, Ontake and Kanosuke in Kagoshima, Sakurao in Hiroshima, and Saburōmaru in Toyama.

Their first project is called Breath of Japan. To bring some originality to the barrels they used, they started with bourbon barrels but planed off the characteristic charred interior, then slowly toasted the insides at low temperatures for their own Shaved and Toasted Bourbon Barrel style. They feel the more mellow, rounded cask aromas this style offers will better match the character of each source spirit. 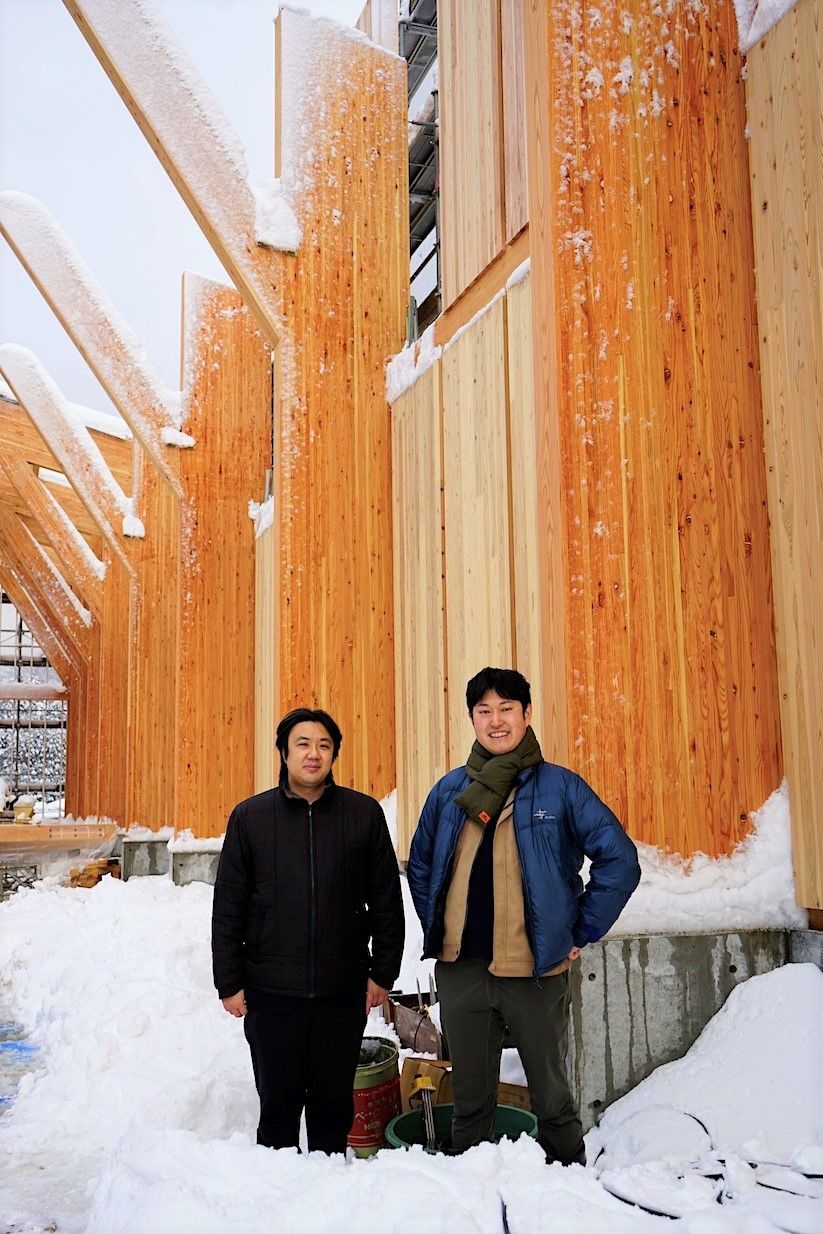 Inagaki (right) and Shimono in front of their under-construction warehouse. Both believe that the entire industry should work to continue improving Japanese whisky.

I asked the two to show me the new maturation warehouse they are having built in the Iba district of Nanto, a city neighboring Tonami. The site stands against a backdrop of rolling hills, with scaffolding surrounding a half-built wooden frame. The sight made me think of a cathedral. As we watched, a crane lifted a massive bundle of building materials.

“It’s 887 square meters in area. The walls will be made from a material called CLT,” says Inagaki. CLT, or cross-laminated timber, is a European building material. It is durable enough for use in high-rise building construction and boasts excellent thermal insulation properties. Another benefit that attracted the pair’s attention is its ability to maintain stable humidity. High humidity in the warehouse can encourage condensation, which in turn leads to mold. However, if the warehouse is too dry it can result in excessive barrel influence on the spirit flavor. Compared to traditional steel-frame and slate warehouses, this building material should permit less climactic influence, and they have hopes it will lead to more gentle maturation.

We headed back to the distillery at the end of our talk, and I sampled some of the source spirits used in Breath of Japan. The Kanosuke spirit had the flavor of exotic fruit, while that from Ontake was well-balanced with floral aromas, and struck me as already being ready for commercial release. The spirit from Saburōmaru stood out for its peaty smokiness, with a note of elegant fruity aroma coming through. I was shocked at the clear differences in character between each spirit at this early, unmatured stage.

Breath of Japan will finish maturing and go on sale from 2025. Each distillery will also release its official bottling around that same time. It is going to be a true pleasure to compare the official with that from the bottlers made from the same new make spirit.

When I left the distillery, the snow started to fall again. It had truly been a day of the snow country. It made me recall the words of one whisky critic, who described Japan’s mountains, coasts, highlands, and islands as offering so much more variety in maturing environment than even Scotland, which made it quite promising for whisky’s future.

Let us all watch to see what Japanese whisky matures into.

(Originally published in Japanese. Banner photo: Breath of Japan base spirits bottled as samples before maturation. The clear spirit will take on an amber color with time. Only about 200 bottles will be released, meaning this will surely become a rare whisky. All photos © Ukita Yasuyuki.)