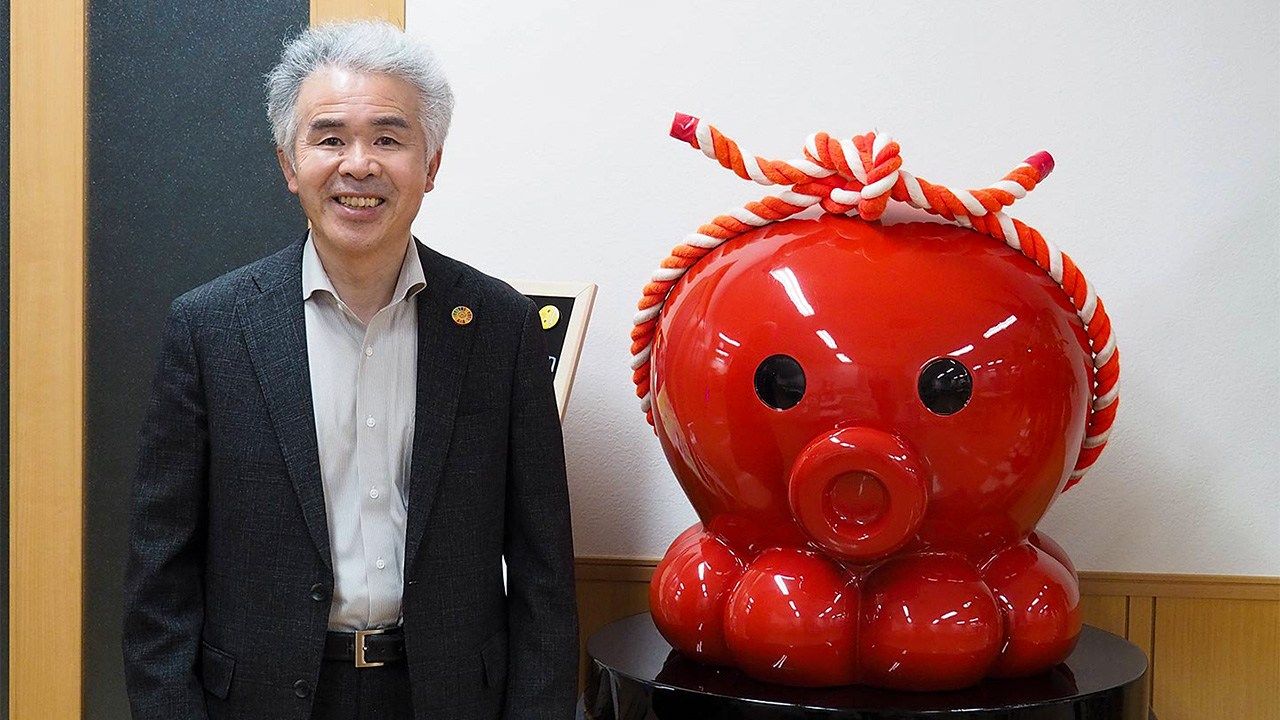 Society Mar 10, 2022
Abe Tadayoshi was once a public official in the town of Minamisanriku, Miyagi, which was devastated in the 3/11 disaster. He is now engaged in various reconstruction projects, which were going smoothly until the pandemic struck. A look at his struggles to keep these businesses, and the local jobs they offer, alive.

From Octopus Paperweight to Local Icon

Travel about five kilometers northwest from the center of Minamisanriku, Miyagi Prefecture, and you arrive at the hilly Iriya district. Walk through the quiet mountain air up the long stone staircase leading to the Iriya Hachiman shrine, the district’s symbol, and your eye is grabbed by a bright red octopus character standing next to the main hall.

“I never dreamed that it would end up enshrined,” says Abe Tadayoshi, Iriya native and head of the Minamisanriku Learning Center. The character, named Octopus-kun, has become a mascot for the town, and his figure is seen everywhere you go, including on the sign at the Minamisanriku Sun Sun Shopping Village in the town center. 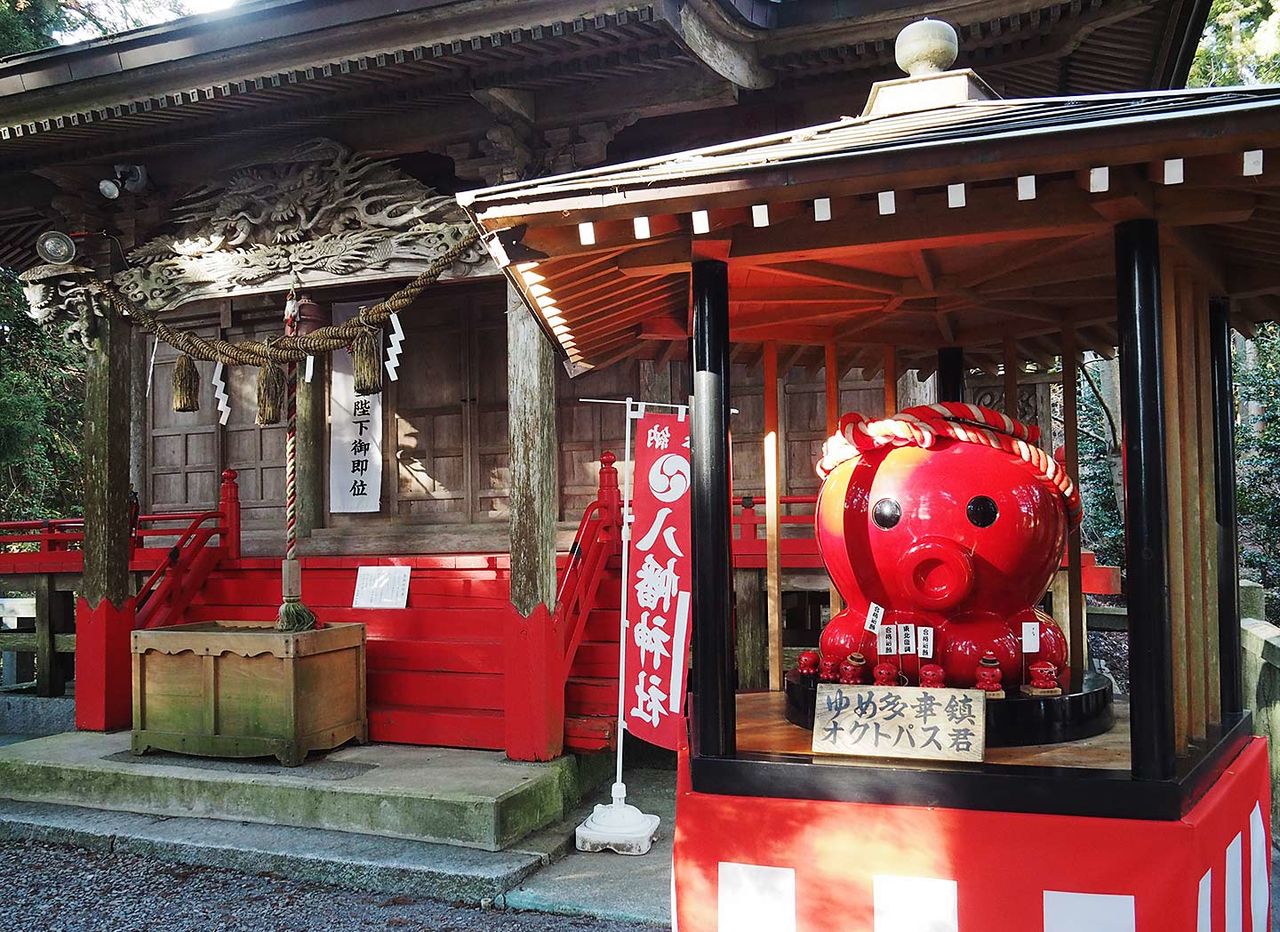 Abe created Octopus-kun in 2009. He was working as a town employee involved with tourism at the time, and he realized that although the town had local food specialties, it produced almost no handicrafts or other souvenirs. He came up with a paperweight based on the local specialty, octopus. The town marketed it as a good luck charm for exam success with the idea that “if you put it” (oku to) on your desk while studying, you’ll be sure to “pass” (pasu) your exams—forming the complete phrase oku to pasu, “octopus.” The Octopus-kun paperweight quickly grew into a popular tourist souvenir.

Abe converted a factory his father owned into a workshop for larger-scale production and made the paperweights on his days off. However, when the Great East Japan Earthquake struck, the tsunami “swept the whole building away, right down to the foundations,” says Abe.

Octopus-kun became a symbol of encouragement for the townsfolk as they helped Minamisanriku try to climb back up from rock bottom. The range of merchandise grew, and items are still in production at the Yes Factory workshop located in Iriya.

“We set up the workshop to create some temporary work for residents until local businesses saw the expected recovery from the disaster. We only planned on running it for two years, but with support for disaster areas coming in from all over Japan, Octopus-kun just kept selling. Now, it feels like we couldn’t quit even if we wanted to.”

In addition to the workshop, Abe also runs Iriyado, a live-in training facility, and helps with a business offering agriculture experience programs.

“The workshop and Iriyado employ people. We need business to keep our town active and protect their livelihoods,” Abe says.

It has been 11 years since the earthquake, and Abe has been hard at work, without a break, the whole time. Let us retrace how he got here. 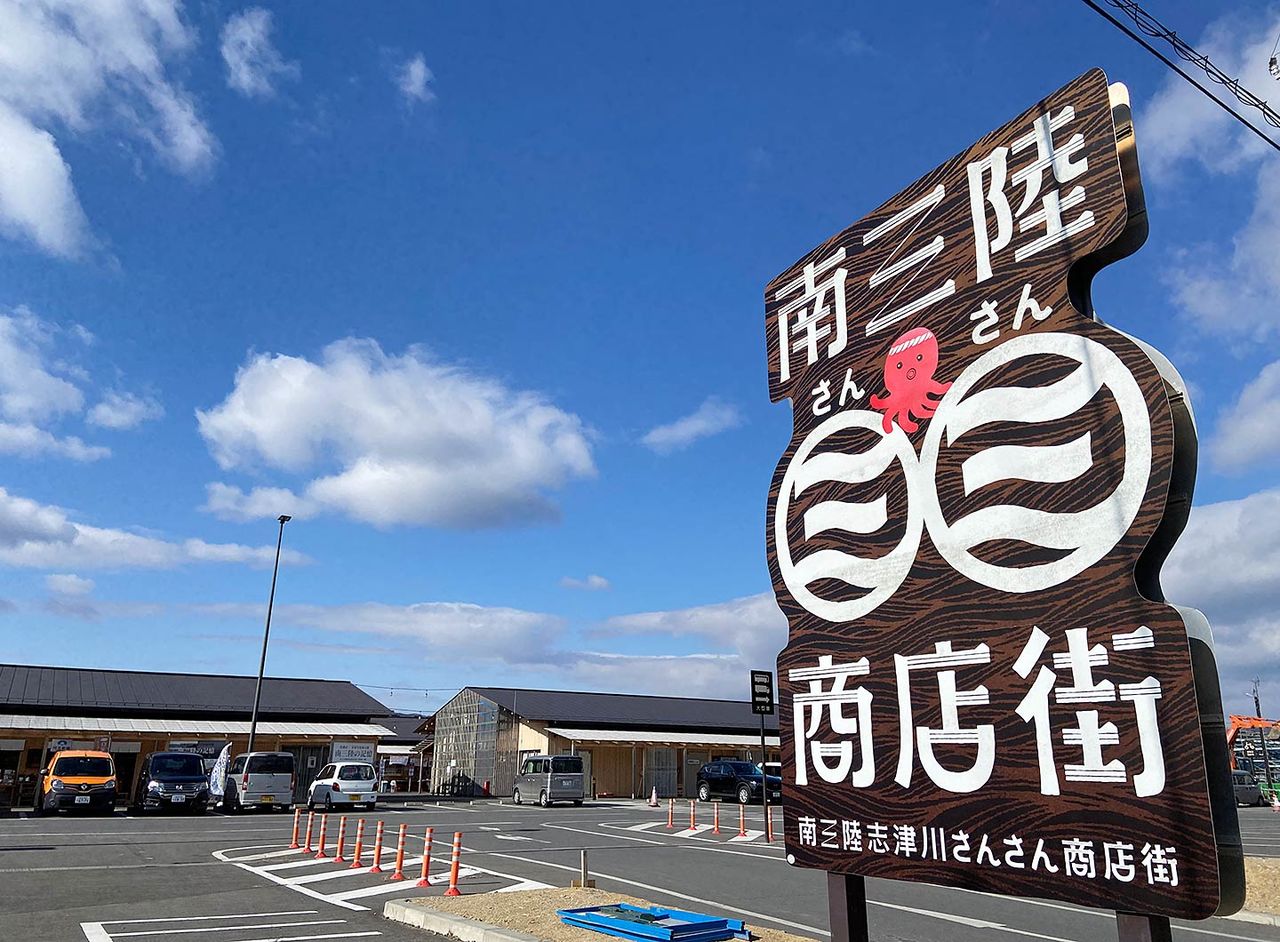 At around 3:25 on the afternoon of March 11, 2011, some 40 minutes after the earthquake stuck at 2:46, a massive tsunami swept over the town. Immediately after the earthquake, Abe had evacuated to a park on higher ground with about 200 other residents, but grew worried about the government building and headed back to the center of town. As he was crossing a bridge on the way there, though, his fear grew, and he turned back. Soon after he returned to the high ground, the government building was swamped by the tsunami, and many of the employees remaining there were lost.

After that, feeling that the park was also in danger, he led the other evacuees to Shizugawa Elementary School, which stood even higher up. There they ended up living in the gymnasium emergency shelter for days.

One night, Abe noticed that the night was silent, despite the gym being full of around 1,000 people of all ages. Even the small children stayed still, not crying or speaking. In that silence, he felt something he had never experienced before. “It suddenly seemed like each individual was a living cell, and all together we created a single organism.” Everyone in the shelter was living and working to survive together. Abe says he will never forget that night, when all those people became one.

However, over time reconstruction went on, and people moved from the evacuation shelter to temporary housing and then into their own homes after they were rebuilt. The organism split up, and people once more started prioritizing themselves over others. While that shift was inevitable, it also made him sad.

If only people could focus on group-fulfillment over self-fulfillment! Abe vowed to make that ideal possible, and he saw a need for a someplace where everyone could live and work together to make it happen. 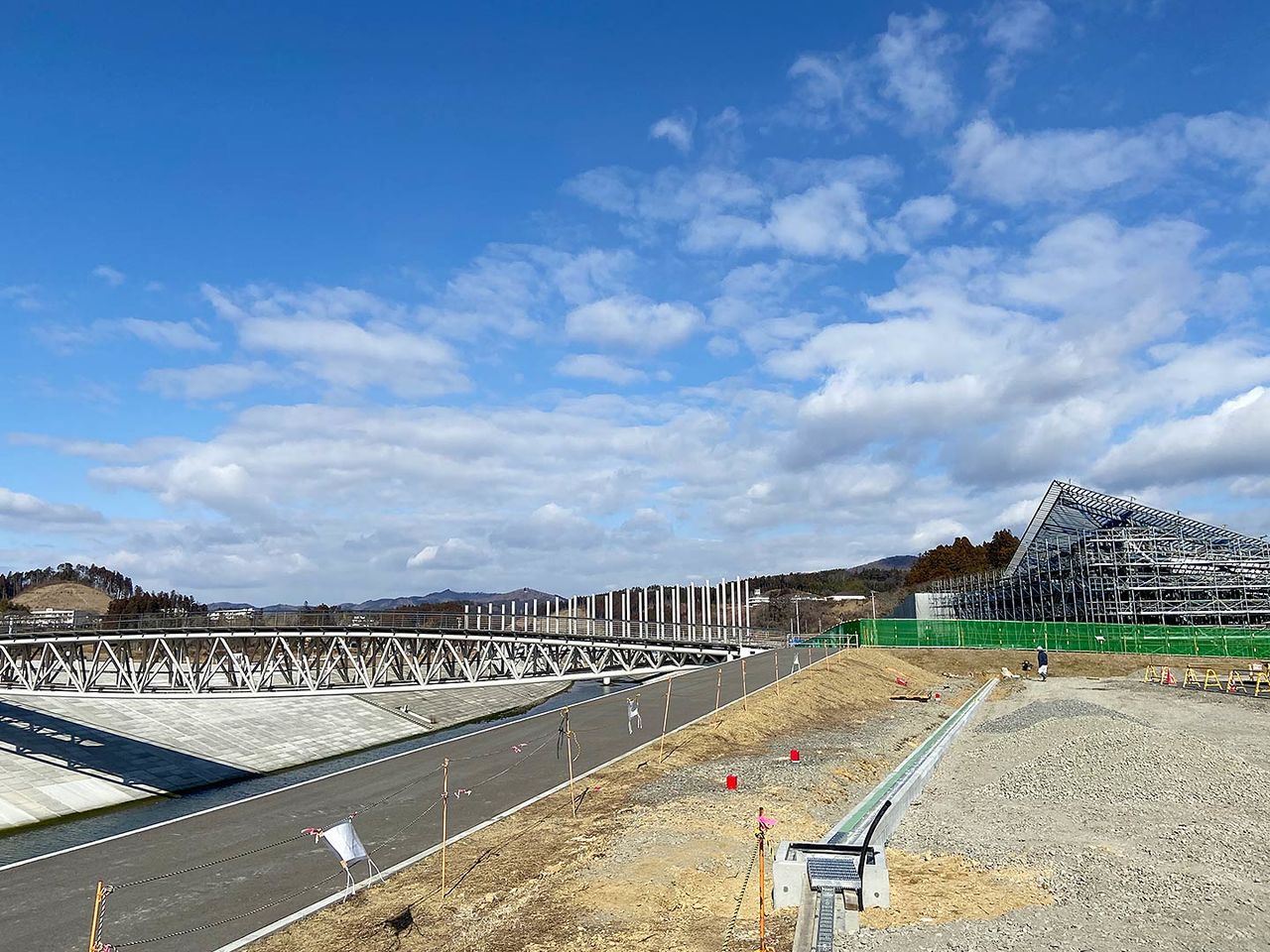 After the earthquake, Minamisanriku’s entire town center was raised some 10 meters higher than before, and the bridges across the river were also rebuilt. At right is the Minamisanriku 311 Memorial construction site, designed by architect Kuma Kengo to preserve the memory of the disaster.

Turning Octopus-kun into a Business

On April 1, not long after the earthquake, Abe was assigned to be the director of the Iriya Community Center after a personnel change. Iriya stood farther inland, so it had not been as badly damaged and served as an entry point for volunteers. While he was working as a local leader of regional recovery and reconstruction activities, he met about 140 faculty members and students from Taishō University in Tokyo who had come to support the efforts. That meeting turned out to be a major turning point both for Abe and for Minamisanriku.

One day in April, a person who had bought an Octopus-kun souvenir before the earthquake gave it to Abe, saying, “You should keep this with you.” Some of the Taishō University members saw this and asked about the octopus. They proposed bringing the character back to life. Just after the disaster, Abe himself had felt that using Octopus-kun was somehow frivolous, but with this new encouragement, he issued a production request to a business in Takaoka, Toyama Prefecture, where he had connections. The roughly 500 pieces he lined up for the May Welfare Market at Shizugawa Junior High School all sold out.

He thus decided to make it a full-fledged business to help bring energy back to the town. The next month he launched the Minamisanriku Reconstruction Octopus Association. The group remodeled a closed schoolhouse into the Yes Factory and opened it up in July. The statue at Iriya Hachiman Shrine was dedicated in November. Orders flowed in one after the other from people wanting to support the reconstruction efforts, and in one year sales hit nearly ¥100 million. 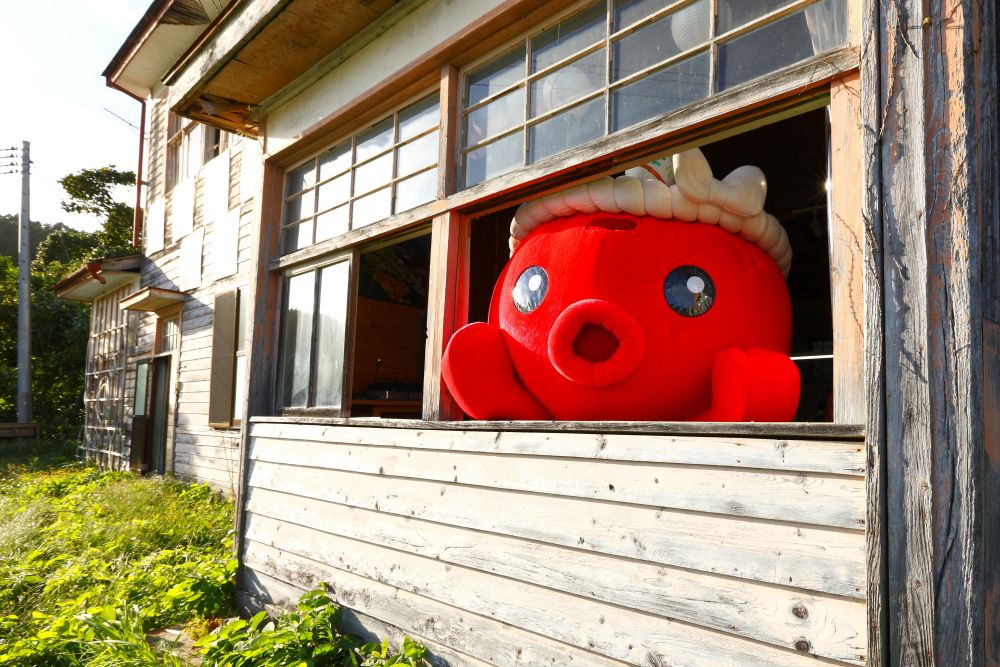 As the town grew lively again, people decided to to try making him a symbol of the town with a more relatable yuru-kyara design and costume versions. Some people opposed this move, saying this was no time for a frivolity like this, but Abe pressed on, and in July 2012 the Octopus-kun yuru-kyara was born.

Along with the Octopus-kun project, the town also started a project to create a learning center in Minamisanriku. They made major progress with financial backing from Taishō University, and completed the Iriyado live-in training facility in March 2013. Since its opening, it has hosted over 8,500 people a year, including visitors from over 30 university and corporate groups annually, as well as individual guests. 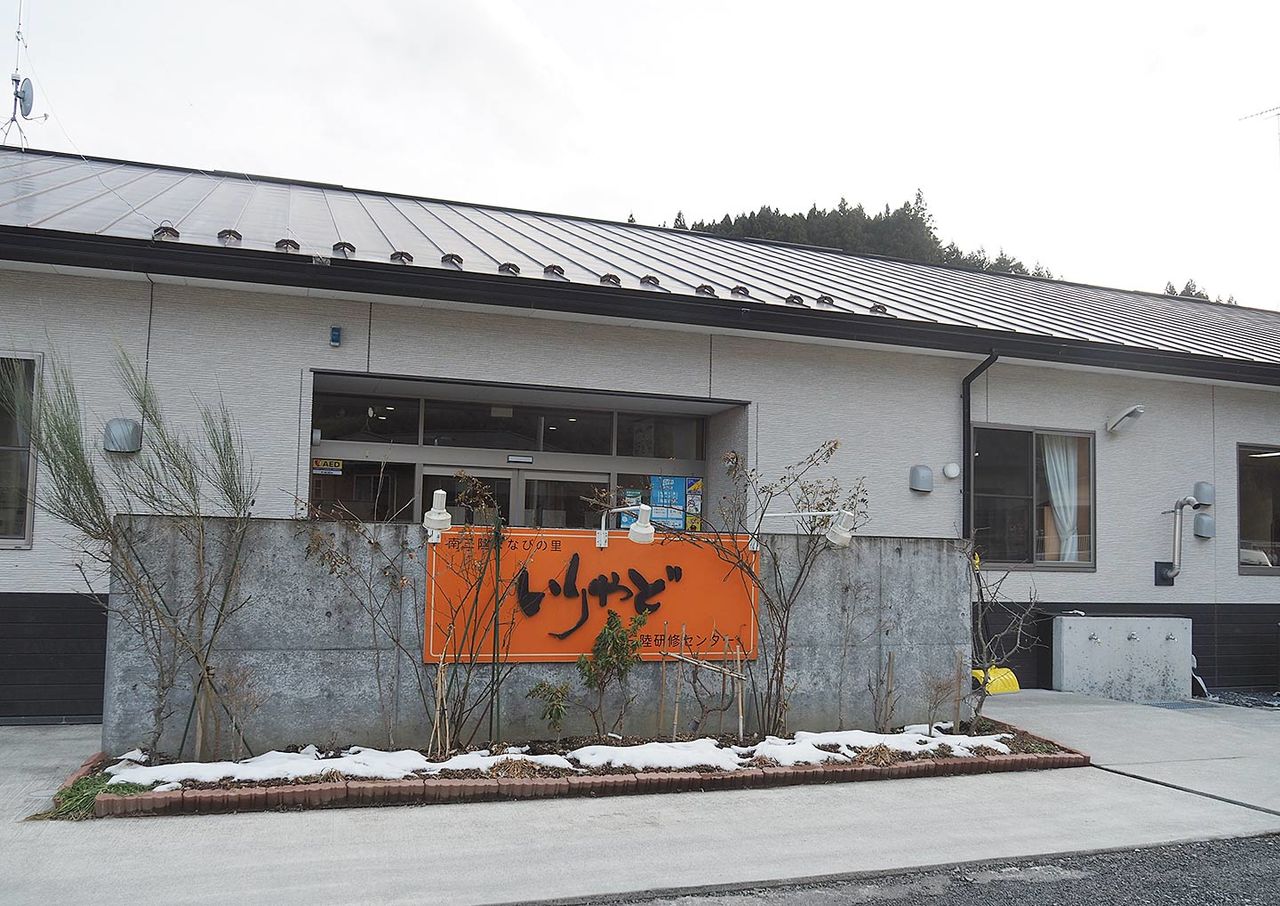 Shadow of the Pandemic

Yes Factory and Iriyado both have become integral to local life for many. However, just as they had achieved stable revenues, the pandemic struck.

Iriyado has been hit particularly hard by COVID-19. Fiscal 2020, from April 2020 through March 2021, saw a 52% drop in occupancy from the previous year, and revenues fell by some ¥36 million. Although the company has managed to stay in operation through crowdfunding and local government subsidies, the situation remains precarious. The primary selling point had been access to experiential learning and fieldwork in regional development, and with those avenues closed, the future is in real danger. The company is now rushing to offer online trial tours and other stopgap measures.

Octopus-kun product sales are also down to about half of their reconstruction effort peak.

“The biggest issue is funding. I feel like I have to do something here. I have to protect the livelihoods of these thirty-odd people,” Abe says, gritting his teeth. 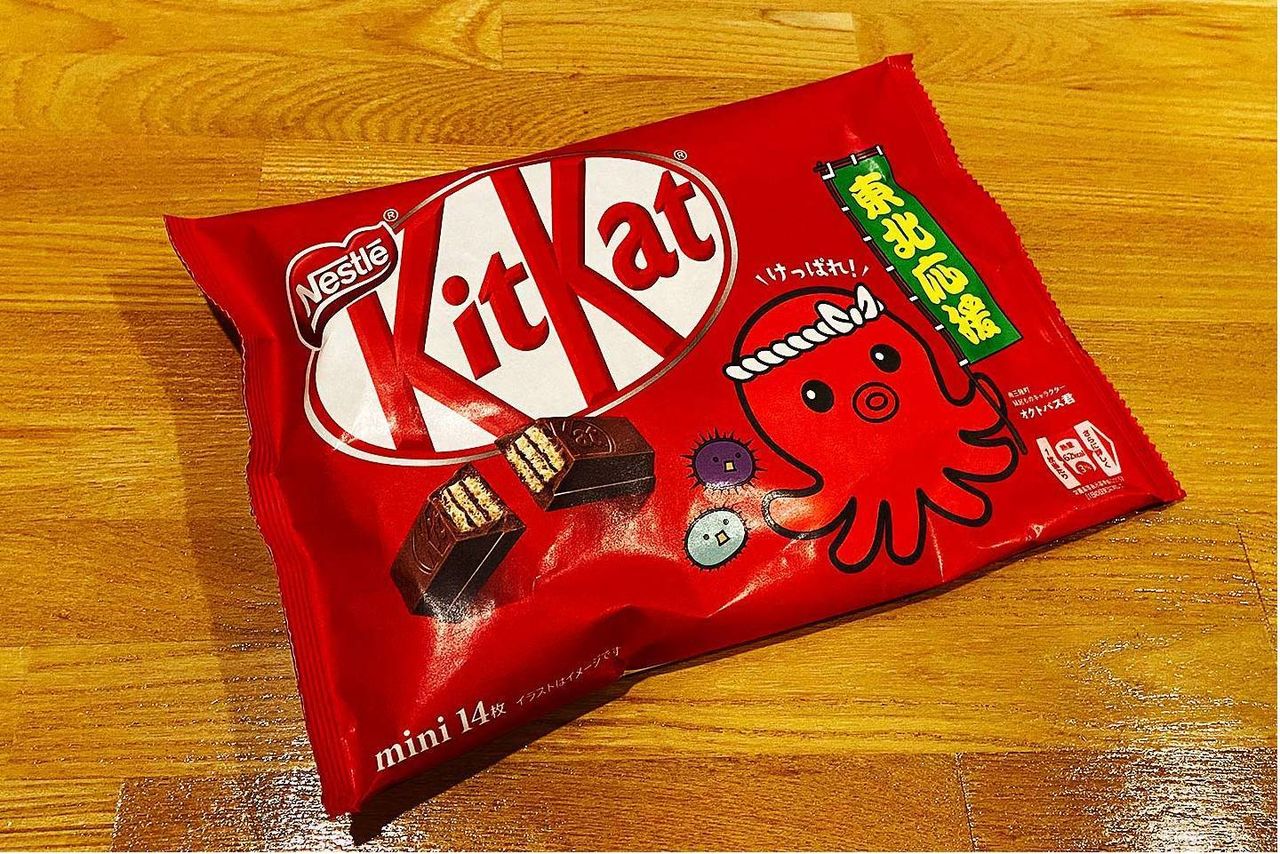 A team-up with Kit-Kat chocolate bars. On sale from February 2022.

Abe had actually planned to step back once the businesses had stabilized, but the pandemic put those plans to rest, too. He says that putting someone else in charge now would be irresponsible. “People often say ‘do your best,’ but that’s the easy part. Just after the earthquake, I could go days without sleeping, easily. The hard part isn’t doing my best, it’s getting results.”

Now, it is results that he is after, and for him that means finding a way to improve the harsh business realities brought by COVID-19. Although his current efforts are all focused on that goal, he still wonders sometimes if what he does is actually for the good of the town.

“I talked about that organism before, but sometimes I wonder if I’m actually a cancer cell—if what I do isn’t what the town should actually be doing. One of the older employees helping me with the business worked too hard and ended up with health issues as a result. I’m worried that it was my fault.”

At the same time, he feels like he wants to serve the memories of those who died.

Many of his superiors and colleagues at the town office perished in the tsunami. Before the disaster, they had often praised his work ethic and encouraged him to try new ventures. A former classmate and childhood friend of his, who died of illness a few years ago, saw Abe’s efforts to rebuild Minamisanriku, and said that the town would be fine as long as he was there.

Many local young people look up to Abe for his efforts over the years. There are also a few Taishō University graduates who have moved to Minamisanriku after their experiences volunteering there. Abe is looking to a future when he will be able to pass the torch to them with peace of mind.

(Originally published in Japanese. Banner photo: Abe Tadayoshi, the idea man of Minamisanriku. Even after retiring from the town office in 2015, he still takes the lead at a variety of local businesses, like the Iriyado learning center. All photos © Fushimi Manabu except where otherwise noted.)