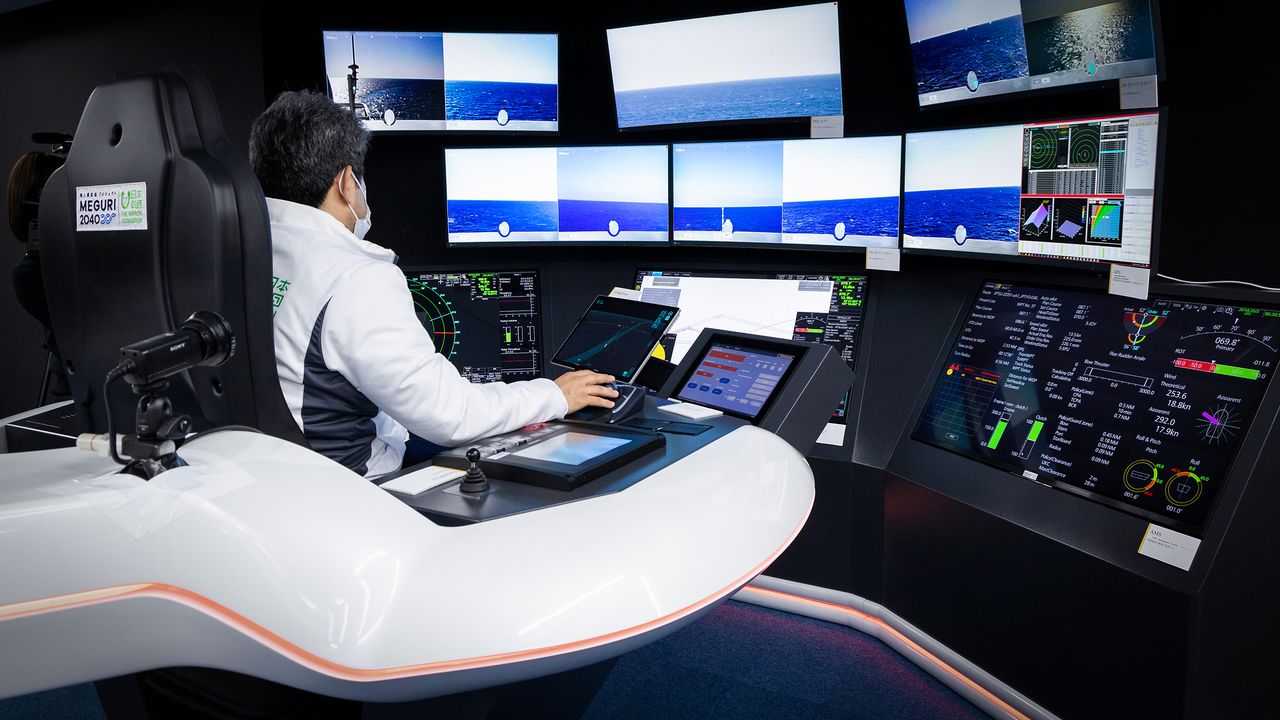 Technology Mar 28, 2022
A successful autonomous voyage by a container ship has taken place in Tokyo Bay, one of the world’s most congested stretches of water. With over 99% of Japan’s international trade by weight travelling by sea, there are hopes that autonomous shipping will become a reality soon.

The Nippon Foundation says it has successfully deployed a container ship on a 790-kilometer round-trip autonomous voyage between Tokyo Bay and Matsusaka port in the city of Tsu, Mie. The Foundation says that it is the first time that such a voyage has been attempted anywhere in the world on a congested stretch of water like Tokyo Bay, which is traversed by many ships every day.

Part of the Foundation’s Meguri 2040 autonomous shipping project, the trial was conducted by a consortium of some 30 Japanese companies led by NYK group company Japan Marine Science. In addition to representation from the shipping and shipbuilding industries, the project brought together expertise from a diverse range of participants including the NTT Group, meteorological information service providers, and marine insurers.

Around 500 ships traverse Tokyo Bay every day, making it 50% busier than the Singapore Strait and 10 times busier than the Panama Canal. The team selected the Suzaku, a 95-meter, 749 metric ton container ship, to perform the trial. While many large ships are equipped with autopilot to enable them to follow a prescribed course, autonomous ships also feature automated collision avoidance and berthing systems. The Suzaku successfully automatically deberthed from Tokyo Bay on February 26. It then crossed Tokyo Bay and travelled to a stretch of water out from the port of Matsusaka, a 20-hour one-way journey, before returning to Tokyo Bay on the morning of March 1. While the crew did engage manual override on a few occasions, the automated collision avoidance system activated 97.4% of the time on the outbound journey and 99.7% of the time on the return journey.

“The ship performed 107 avoidance maneuvers on the outbound journey alone. Each change of course enabled the ship to avoid several other vessels, so we can infer that it avoided a total of 400 to 500 ships,” says Kuwahara Satoru, program director at the consortium, stressing the positive outcomes of the trial.

To enable the ship to travel autonomously, servers, monitors, and other equipment were set up in shipping containers on land, which were then transferred to the Suzaku. This approach will allow existing ships to be upgraded to autonomous ones without extensive modifications. 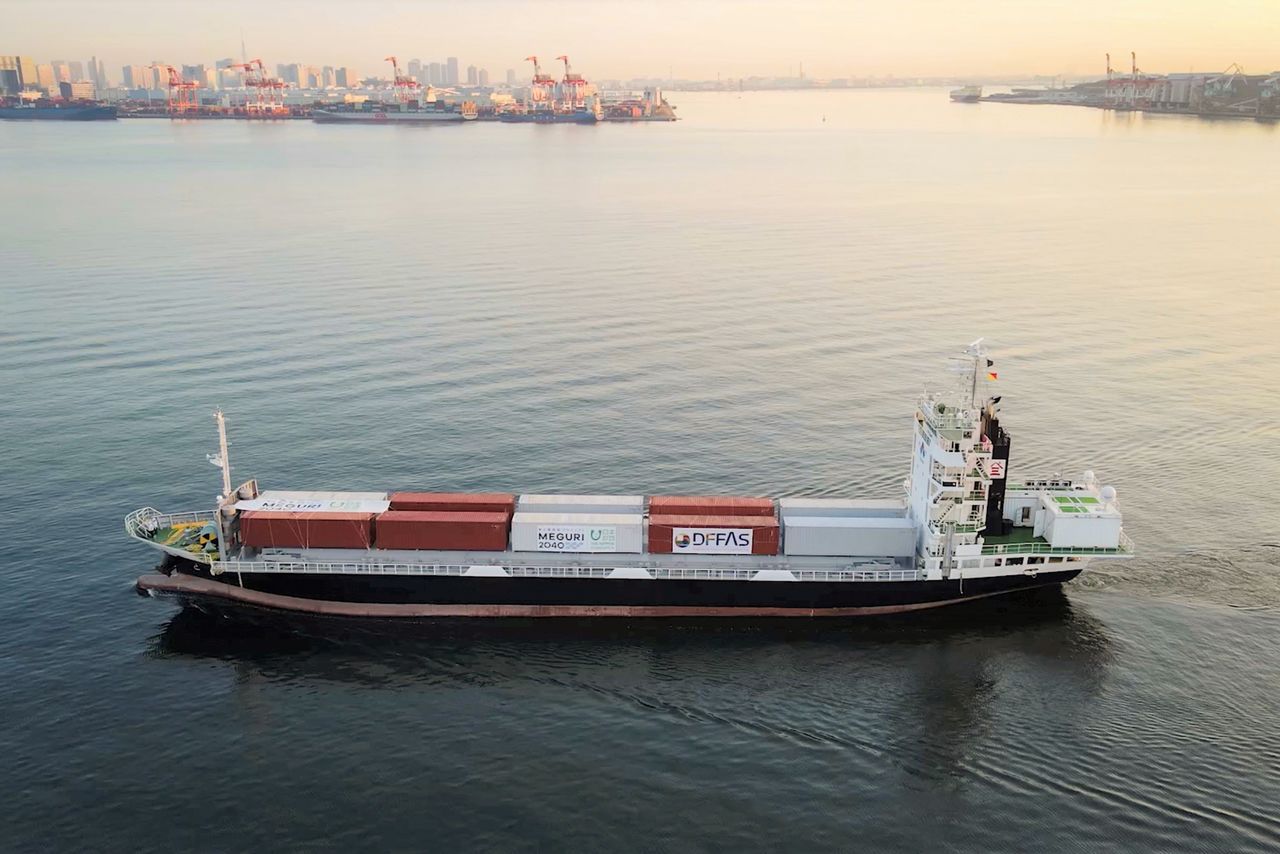 White shipping containers at the stern of the Suzaku contain servers and other equipment. (Courtesy the Nippon Foundation) 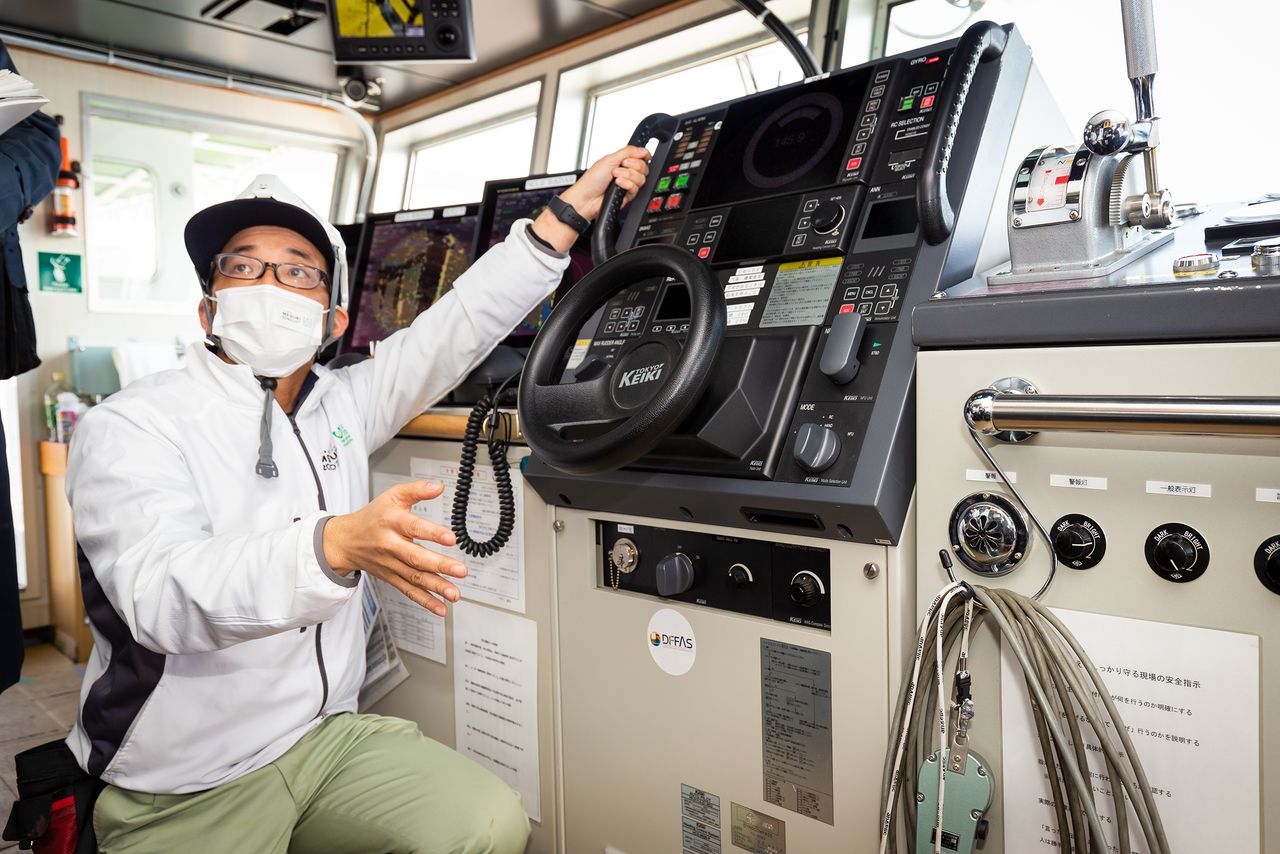 A switch below the wheel on the Suzaku’s bridge switches the vessel to remote control.

One significant feature of the trial was the utilization of a ground support station in Chiba. Described by Kuwahara as being “like an airport control tower” and “an essential element in making autonomous shipping a commercial reality,” the station gathers meteorological and marine data, as well information on traffic volumes, and monitors operational status and engine room status, enabling control of the ship to be overridden remotely in an emergency. This was a truly comprehensive trial, complete with sea-to-ground communication links. 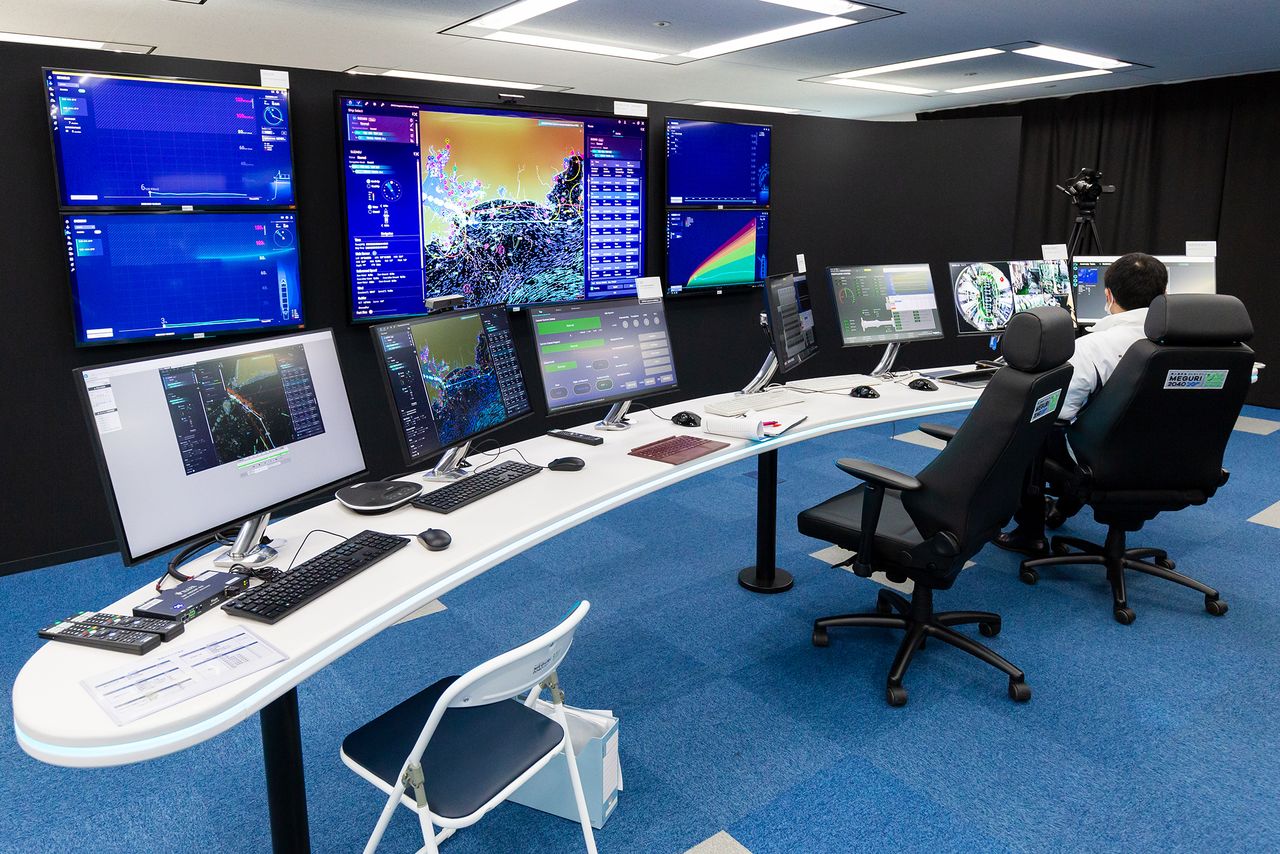 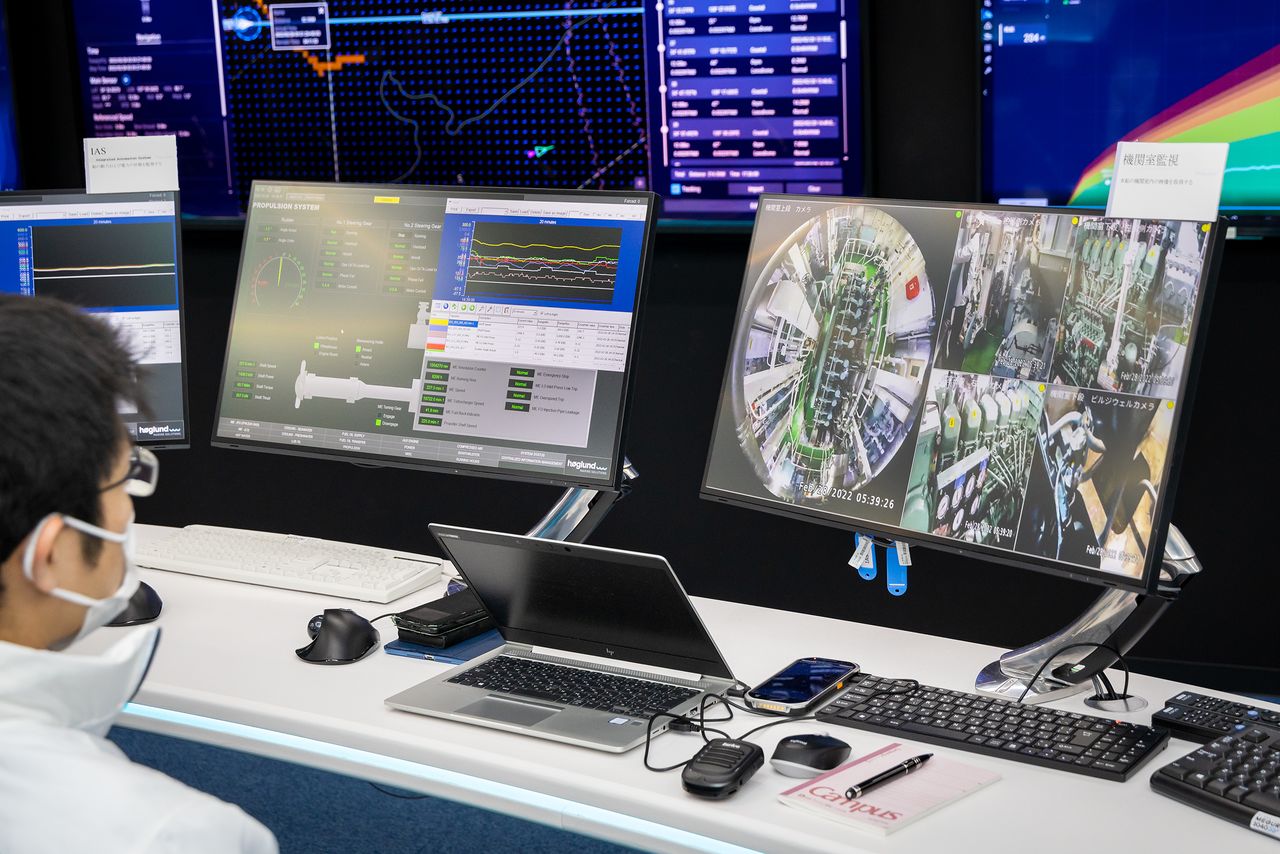 In addition to monitoring the status of engines and electrical systems, the autonomous navigation system also warns operators of anomalies. 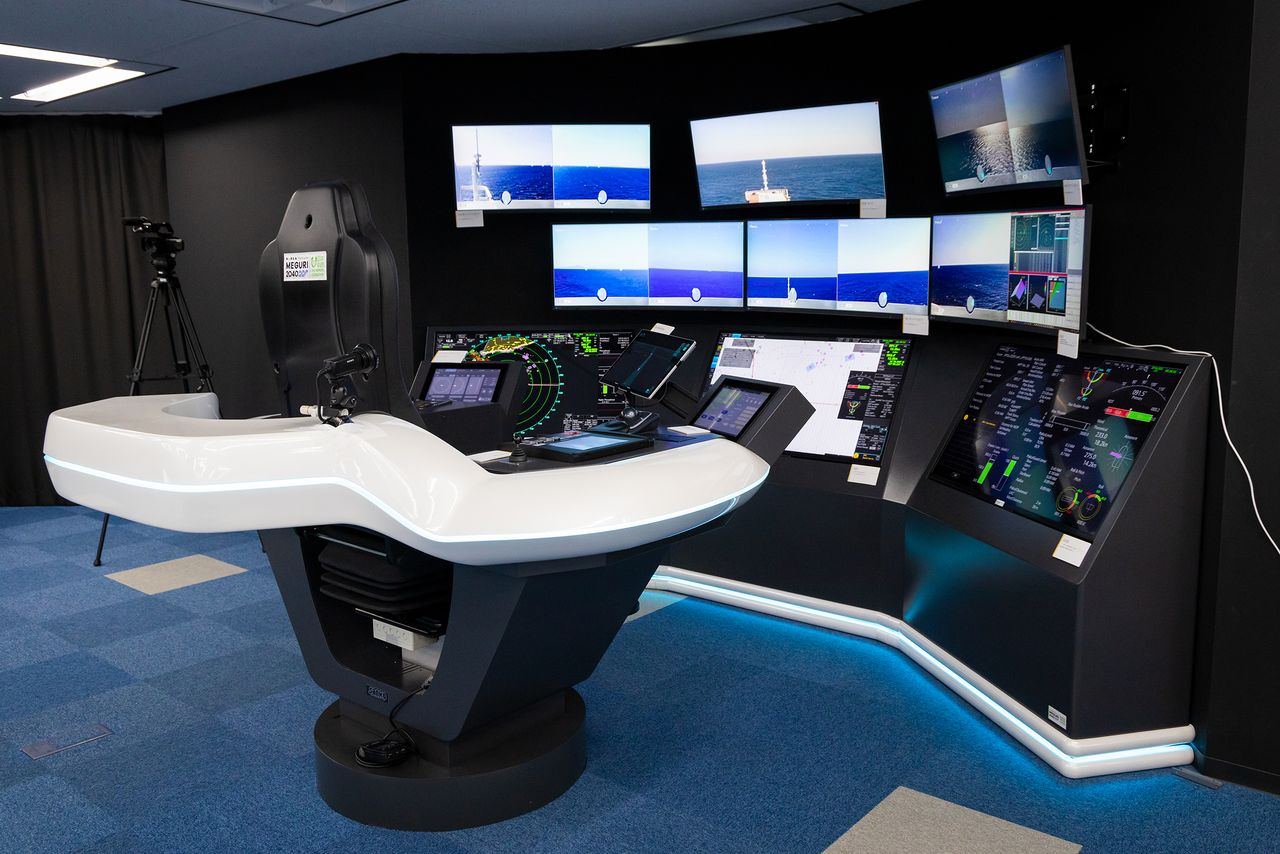 The futuristic design of the remote ground station was chosen to inspire the younger generation.

On February 28, tests were performed that saw the ship controlled remotely from the ground support station. The team succeeded in sending instructions via satellite link to the Suzaku, which was around 300 kilometers away in Ise Bay.

Kuwahara says, “The ground support station enables us to monitor, and offer support to, thousands of ships at any one time. Advances in cloud computing might one day make it possible to steer large vessels from your home.” 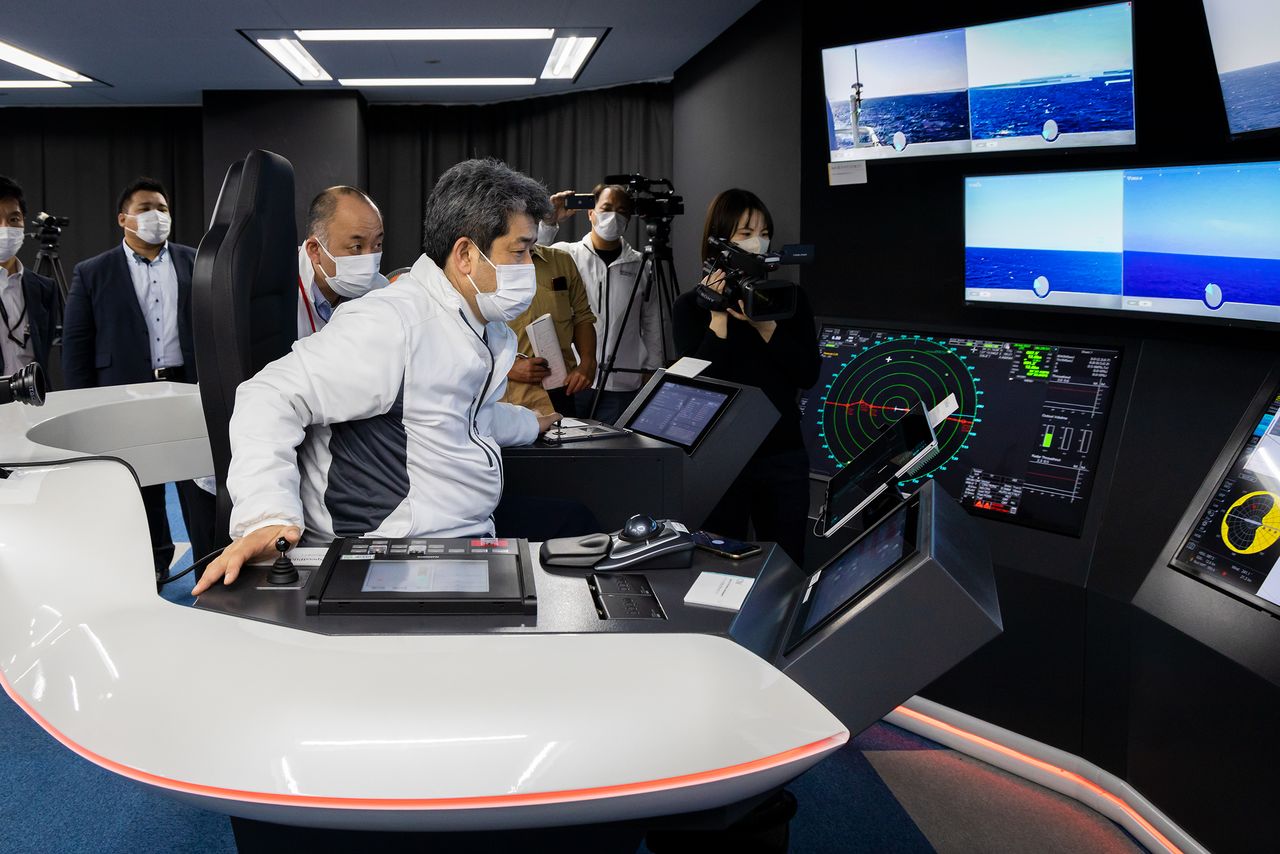 Kuwahara adjusts the speed of the vessel. 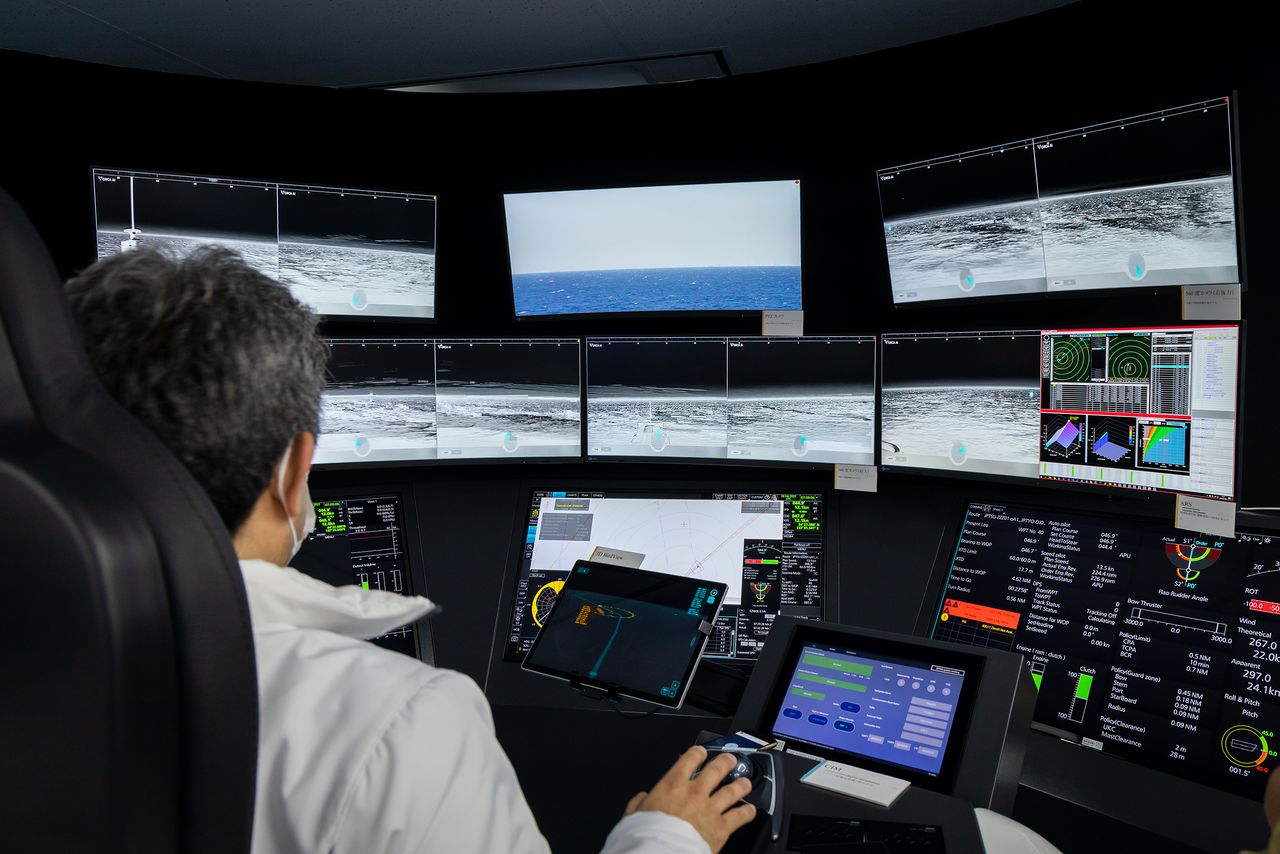 At night, the image feed comes from infrared cameras.

The Meguri 2040 project aims to provide solutions to societal issues such as labor shortages, the aging marine workforce, and the prevalence of accidents, which are often attributable to human factors, and to make commercial autonomous voyages a reality by 2025. Kuwahara says the team “intends to work on resolving the issues that were identified in the trial, while putting in place measures to facilitate the commercialization of the technology.”

In fact, the process of establishing legislation and insurance frameworks for autonomous voyages looks to take longer than the actual development of the technology. However, crewing requirements may be relaxed first. The current Mariners Act requires a minimum of two persons to be stationed on the bridge at all times on vessels larger than 700 tons, whether or not the vessels are autonomous; this means a minimum crew of six, assuming eight-hour shifts. If the crew requirement can be relaxed by one through the introduction of autonomous navigation systems equipped with automated avoidance capabilities, it will free up enough mariners to crew one more ship. The technology’s promise to solve the shortage of mariners is another reason that its development is a matter of urgency. 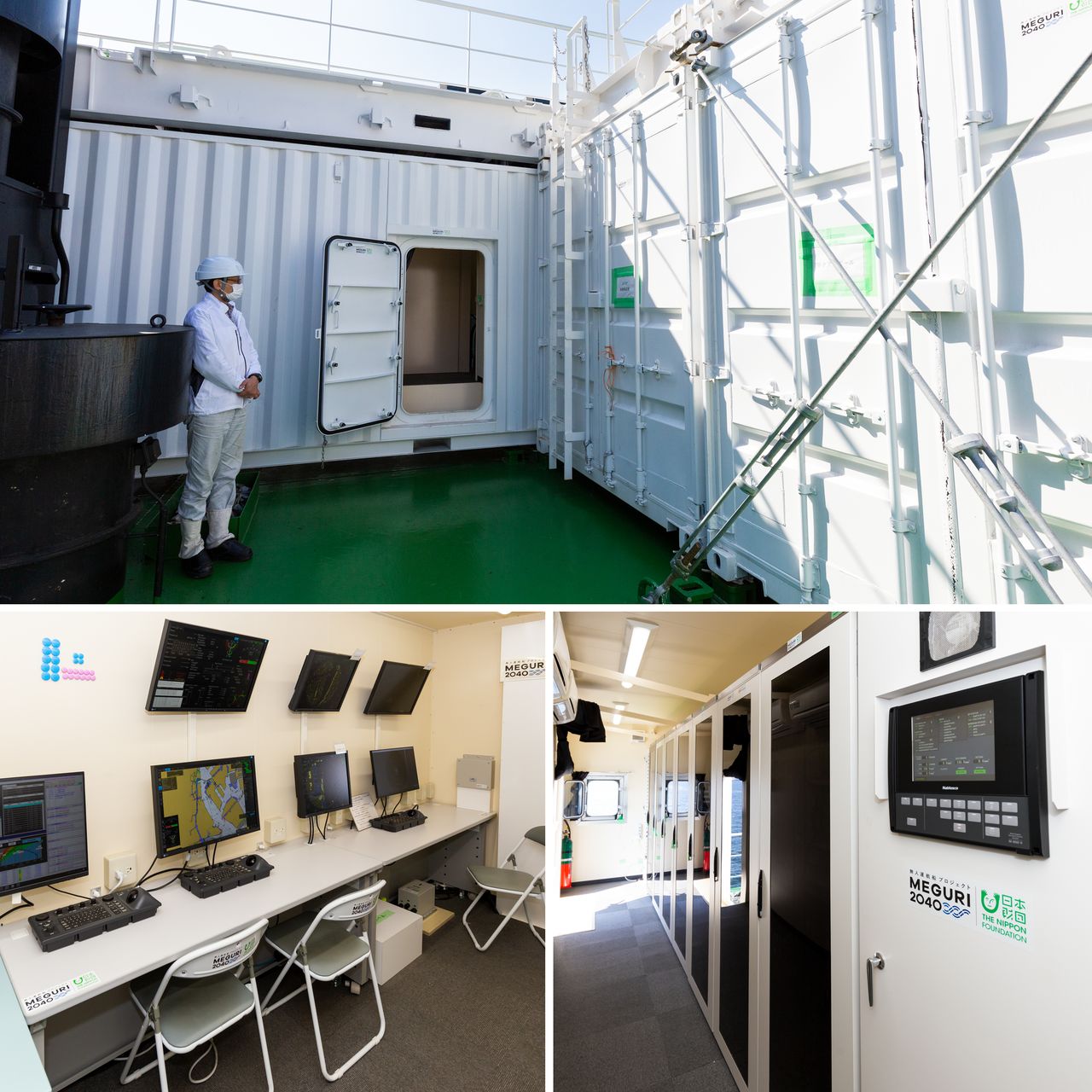 The shipping containers at the stern of the Suzaku contain the autonomous navigation system. Inside are a monitor area and a server area.

The Meguri 2040 project on March 14 moved on to its next autonomous trial, this time of an amphibious vessel. This trial was the sixth and last performed by the group of five consortiums.

The Nippon Foundation’s Unno Mitsuyuki says, “We are now going to draw on the strengths of the respective consortiums to further step up the pace of development. On the basis of the outcomes of this development process, we will then approach the International Maritime Organization and other bodies with proposals.”

Let us hope that the 2025 Osaka Expo will see automated ships grace Japan’s city of water. 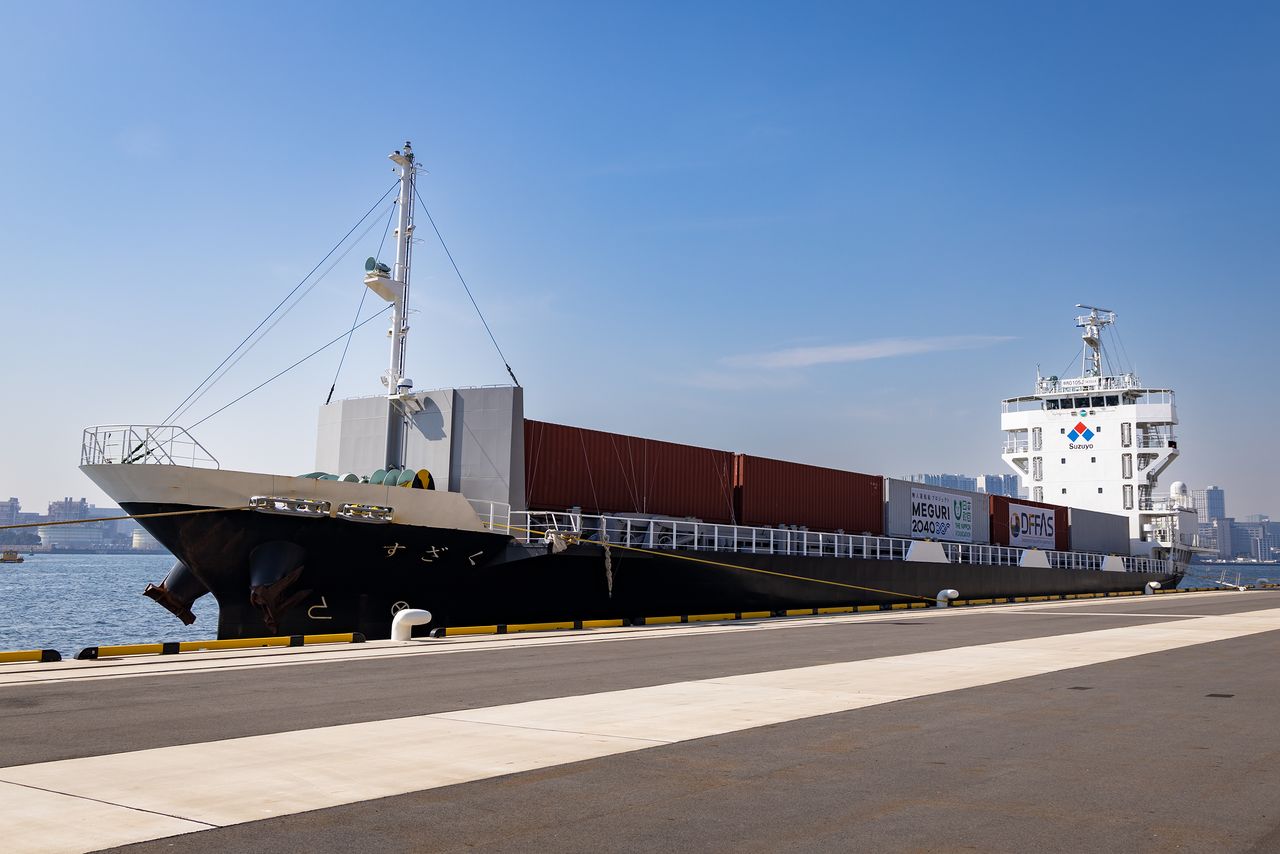 The Suzaku back in Tokyo Bay after a successful autonomous voyage.