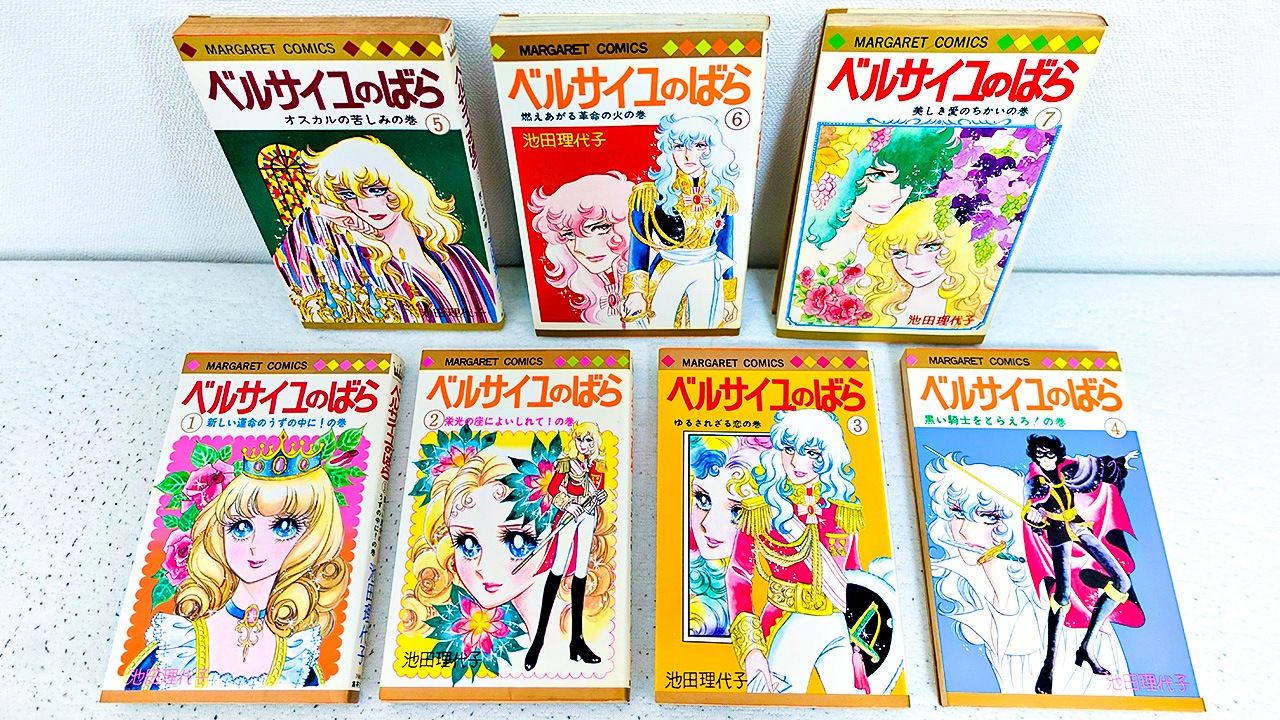 Culture Manga Anime Entertainment May 6, 2022
This year marks half a century since the debut of Berusaiyu no bara (The Rose of Versailles), the classic manga set in the tumultuous years surrounding the French Revolution. The series has been adapted for both screen and stage, and continues to attract new generations of readers. Hotta Junji takes a look back at the cultural climate that inspired author Ikeda Riyoko’s seminal statement of women’s independence.

The most important element of any true love story is adversity. After all, a plot in which two people fall in love and live happily ever after without any sort of barrier to their romance would be over pretty quickly.

Adversity, therefore, is crucial. And rather than personal factors such as a character’s own indecision, the more external and insurmountable the obstacle, the more universal the appeal. That’s what makes Romeo and Juliet, with its tragic tale of doomed lovers from warring households, such a timeless and enduring classic.

That story surrounds the Montagues, a Ghibelline family loyal to the Holy Roman Empire, and the Capulets, of Guelph stock, with sworn allegiance to the Papacy. A fitting comparison from Japanese history would be rival clans who supported the Northern and Southern courts during the Nanbokuchō period (1336–92). Or perhaps more relatable still for readers might be the relationship between Amuro and Lalah in Mobile Suit Gundam (1979–80).

But in recent years, such love stories have fallen out of favor. Even Disney has found a following for films with no romantic narrative, and in Frozen (2013) the true love at the heart of the tale is not between male and female protagonists, but the sisters Anna and Elsa.

Similar trends can also be seen in Japan. The manga Nagi no o-itoma (Nagi’s Long Vacation, 2016–present), made into a live action TV drama in 2019, depicts a love story very different to classical archetypes, with the girl leaving the boy not to find her way back to him in the end, but rather to find her own confident footing.

On reflection, this shift seems only natural. Contemporary society is modeled very much after the ideas described by Milton and Rose D. Friedman in their influential laissez faire economic treatise Free to Choose (1980), so it follows that romance, too, should also involve absolute freedom of choice. And if you are free to choose whichever partner you like regardless of misgivings, then traditional hurdles become less of a factor.

Some sociologists see these trends as part of a broader inability to straightforwardly express romantic affection, to the extent that many modern love stories will obfuscate matters through the introduction of themes such as illness, accident-induced memory loss, or even lovers existing in different time periods altogether. Other notable works like the films Portrait of a Lady on Fire (France, 2019) and Carol (UK/USA, 2015) choose to set their events in earlier time periods that were still beset by strong prejudices or restricted independence for women.

From a present-day standpoint, these historical societies are seen as harsh and restrictive. Scandals that cause little more than an online clamor in the 21st century might have been serious crimes in the Edo period (1603–1868), and diverse lifestyles were not accepted the way they are today.

Perhaps the ultimate barriers to personal liberty came in the form of the class system. Pioneering Meiji period reformer Fukuzawa Yukichi (1835–1901) may have famously said that “heaven does not create one man above or below another man,” but in those days, in the West as in Japan, the social class boundaries separating nobles and commoners, for instance, were all too insurmountable.

In 1789 the people of France rose up in revolution to smash those barriers. And almost 200 years later, in 1972, the weekly shōjo manga anthology Shūkan Margaret launched a new serialization, Berusaiyu no bara (The Rose of Versailles), whose dramatic depictions of that tumultuous age would earn it a prominent place in the annals of manga history. 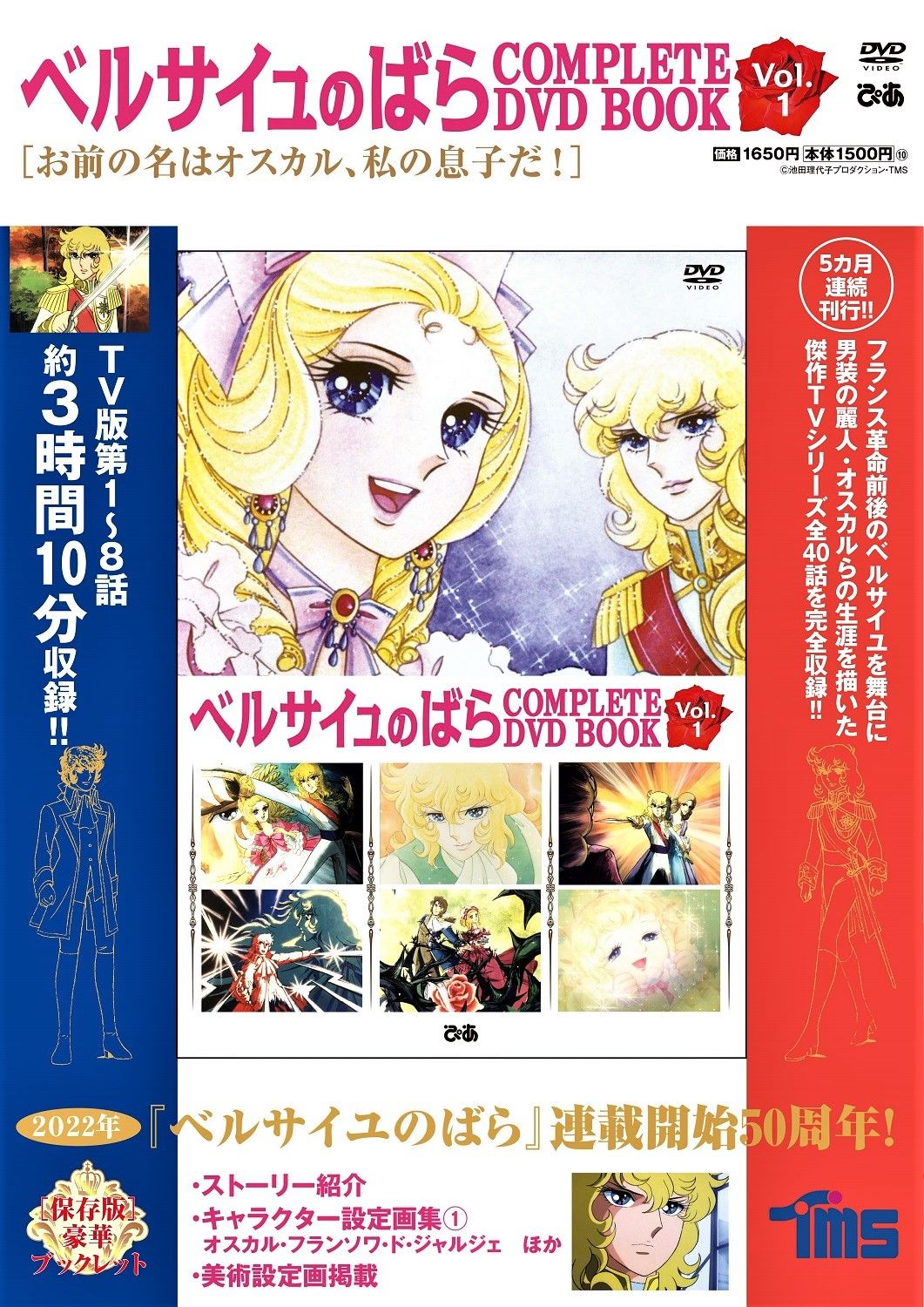 The year 2022 also saw lavish DVD reissues for the hit anime adaptation of The Rose of Versailles, originally aired from 1979. (©︎ Pia Corporation)

This period romance, filled with characters buffeted and destroyed by the tides of history, fighting to usher in a new era, and laying down their lives for the ones they love, won an army of passionate fans and would come to exert a powerful influence on future generations.

But initially, the Margaret editorial board was strongly opposed to the idea of running The Rose of Versailles, doubting the ability of their teenage female readership to understand and appreciate historically themed content. At the time, manga was still regarded very much as “low culture,” and shōjo manga was the lowest of them all, with female manga artists earning only half as much as their male peers (though in that respect it was remarkably similar to modern-day Hollywood).

Author Ikeda Riyoko was born in Osaka in 1947, and raised in Kashiwa, Chiba. In an age when many still questioned the sense in women proceeding to higher education, she overcame her father’s objections to study philosophy at the Tokyo University of Education (now the University of Tsukuba). Soon after enrolling, she became involved with the vibrant student activism of the day. And realizing the hypocrisy in railing against society and older generations while still receiving handouts from her parents, she moved out of the family home and funded her studies through waitressing, factory work, and door-to-door sales.

In 1968, as a college junior, she got her first strip published in Shūkan Margaret. And while she initially saw writing comics as just another means of supporting herself, as she frantically scribbled out strip after strip just to pay the rent, her popularity steadily grew, culminating at the age of 24 in the serialization of The Rose of Versailles.

As mentioned above, the magazine’s all-male editorial board was initially strongly opposed to the move, fearing the historical material would be unfathomable to their audience. But after Ikeda backed her new title to succeed, and pledged to resign if it didn’t, they finally relented. 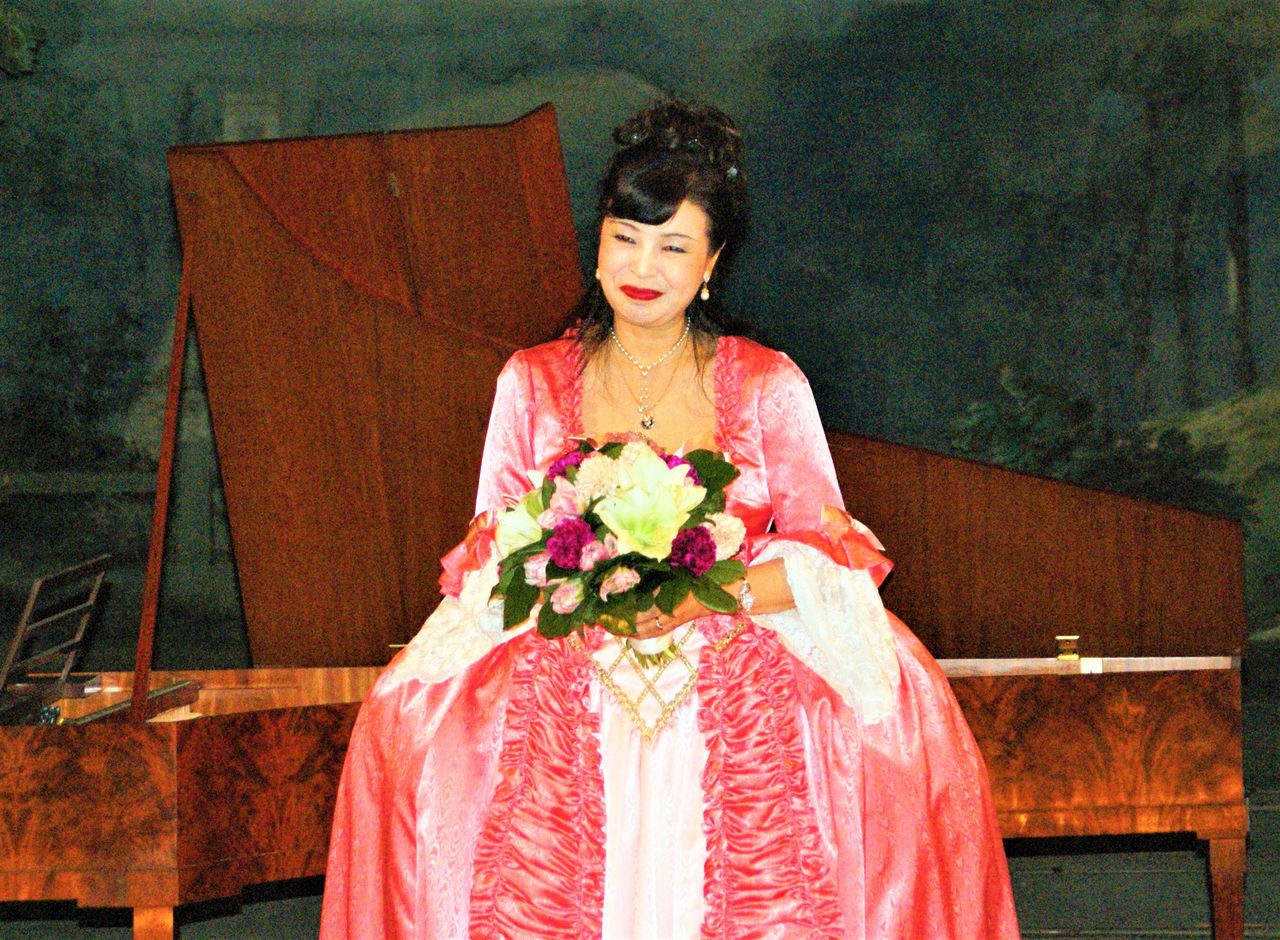 In January 2011, Ikeda Riyoko herself sang at a recital held on the grounds of the Palace of Versailles as part of the Angoulême International Comics Festival. (©︎ Jiji)

While Marie Antoinette and Count Axel von Fersen are genuine historical figures, the military uniform-clad beauty Lady Oscar was born entirely from Ikeda’s imagination, though inspired by the true story of a Royal Guard sergeant who came to stand with the revolting citizens. In a 2013 interview with the women’s magazine Fujin Kōron, she recalled how the decision to portray Oscar as female grew in part from her own inability to convincingly capture the realities of a male military officer in a man’s world. But she also revealed that the character was intended as a symbol of defiance against a society that still failed to recognize the talents and identities of so many individual women.

However, while that may conjure the idea of Oscar as a somewhat severe figure, battling for acceptance in a man’s world, the character herself could not be more different.

In Ikeda Riyoko no sekai (The World of Ikeda Riyoko), a 2012 tribute anthology published to commemorate the fortieth anniversary of The Rose of Versailles, Yoshinaga Fumi, a contemporary manga artist who has also dabbled in historical themes including the French Revolution, described the unique appeal of Ikeda’s work: “She depicts an idealized society, in which every individual is living an authentic life. But she combines that with a strong focus on entertainment in a way that is unmatched anywhere else.”

And it doesn’t get any more entertaining than Lady Oscar. A jewel among aristocratic society, enchanting male and female nobles alike with her combination of beauty, strength, and wisdom, but also possessed of an understanding of the times in which she lives, the compassion to empathize with those less fortunate, and the authority to bend others to her command. The character’s romantic narrative is no less colorful, starting out with an unrequited interest in Axel von Fersen until she discovers and ultimately reciprocates the affections of André Grandier, her childhood companion, then manservant, and finally regimental subordinate.

Against the backdrop of the revolution, despite her privileged status, Oscar never once entertains the notion of fleeing to another country. Likewise, André is sworn to remain by her side, and it is this tale of class barriers in an age of societal upheaval that gives the story its poignancy.

From its very first installment, The Rose of Versailles topped reader popularity surveys, and down the years it has shifted a record 15 million volumes. The tragic love arc of Oscar and André was particularly instrumental in capturing the hearts of the audience, and the release of the installment where Oscar finally meets her end plunged many fans into a pit of despair. 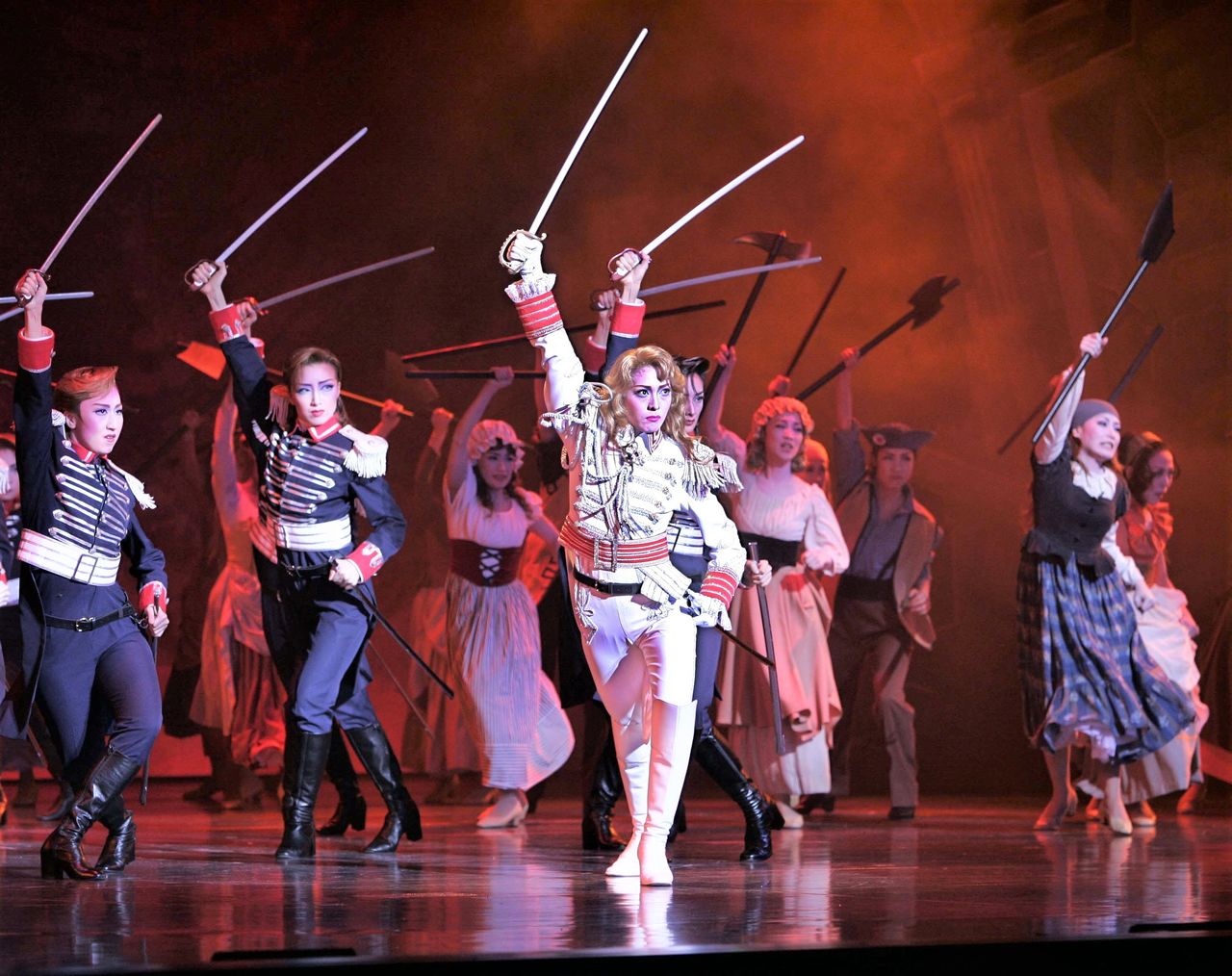 As of 2014, the Takarazuka Revue’s musical adaptation of The Rose of Versailles had been performed for some 5 million audience members in the 40 years since its debut in 1974. Photo taken at a February 17, 2006, performance at the Tokyo Takarazuka Theater. (©︎AFP/Jiji)

In 1974, the story received a musical adaptation from the iconic all-female Takarazuka Revue theater company. And while the plan initially met with opposition from devoted fans of the manga, the production became an enormous success. This was followed up in 1979 by a televised anime series, which like the print and theater versions remains the object of widespread affection and discussion, including in France, where the series was broadcast from 1980. With the passion of fans undiminished even after 50 years, it can be said that Ikeda’s work has a timeless appeal transcending national and generational boundaries.

If you will forgive me for closing with what may seem like a sudden digression, I would touch on a senior colleague of mine, who in his time was lauded by peers as a genius editor and went on to win a major literary prize. He long maintained that all commercially successful manga series essentially dealt with themes of homosocial friendship, rather than heterosexual love. I must admit I found his argument compelling, given the presence of hits like the classic 1968–73 boxing series Ashita no Joe (Tomorrow’s Joe), but I always felt somehow that shōjo manga were an exception. When I put this proposition to a celebrated female manga artist, though, she contemplated the question for a while before concluding: “No, shōjo manga are no different.”

I still wonder at times whether The Rose of Versailles, with its two romantic story arcs, might be an exception to this rule, but the more I consider the work the less certain I am. What do you think?

(Originally published in Japanese. Banner image: Standalone volumes of The Rose of Versailles, originally serialized in Shūkan Margaret between 1972 and 1973. © Nippon.com.)