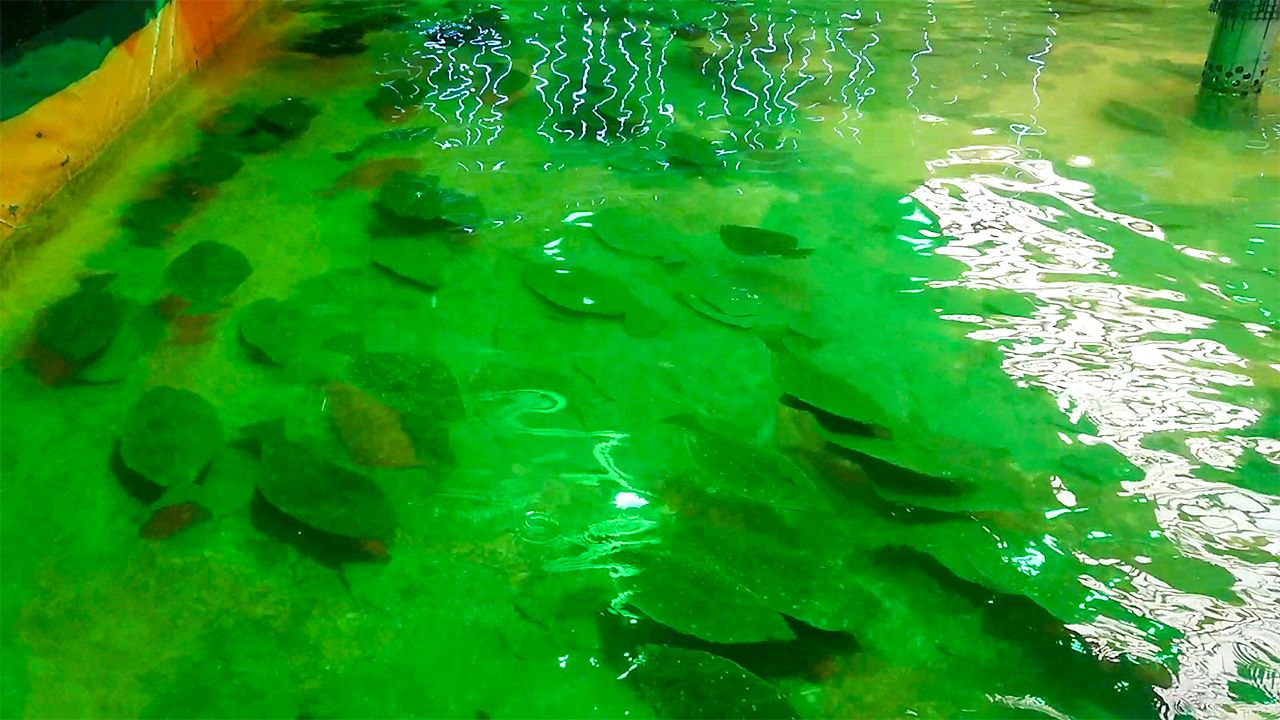 Science Technology May 10, 2022
Kitasato University has developed a “light farming” technique that makes flatfish varieties like halibut and flounder grow 60% faster. We asked Professor Takahashi Akiyoshi how his team came to invent this revolutionary technology. 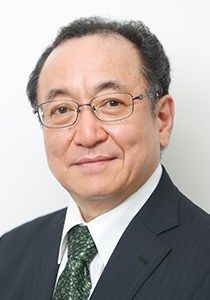 Of the 4.23 million tons of fish and other seafood produced in Japan in 2020, around 24% was farmed, according to a fisheries and aquaculture production survey by the Ministry of Agriculture, Forestry, and Fisheries. There are hopes that aquaculture, which allows fish to be raised in controlled environments, will help to revitalize Japan’s fish and seafood industry and make Japan more self-sufficient in terms of the food it consumes. Aquaculture also has a stabilizing effect on fish prices, enabling consumers to buy the fish they want for a reasonable price.

While yellowtail, red seabream, and greater amberjack are the most farmed fish in Japan, it is the less common flatfish family, which includes Japanese flounder, barfin flounder, and spotted halibut, that is now “in the spotlight”—quite literally, due to the invention of a “light farming” technique that uses green LED light to make fish grow around 60% faster.

“It started when we were trying to find a solution to a different problem—how to prevent fish from turning black,” explains Takahashi Akiyoshi, a professor in marine bioscience at Kitasato University and one of the inventors of the “light farming” technique. Takahashi, who grew up in a family of fishmongers in Kamaishi, Iwate Prefecture, has specialized in the study of fish hormones ever since enrolling in Kitasato University’s School of Fisheries Sciences (now the School of Marine Biosciences).

When flatfish are raised in tanks, their undersides (the sides with no eyes) tend to turn black. Takahashi partnered with Yamanome Takeshi of the Iwate Fisheries Technology Center in an attempt to solve this problem. Beginning in the 2000s, the pair spent several years experimenting, and presently observed that flounder kept in white tanks were less likely to exhibit blackening then those farmed in black tanks. The pair also noticed that the barfin flounder farmed in the white tanks grew more quickly. However, when the white tanks became dirty, they ceased to have this effect on growth, which gave the pair the idea of illuminating the tanks with colored light. After experimenting with the three primary colors of light, red, blue, and green, the scientists found that green light caused a marked acceleration in growth. Takahashi and Yamanome published their findings in 2009. 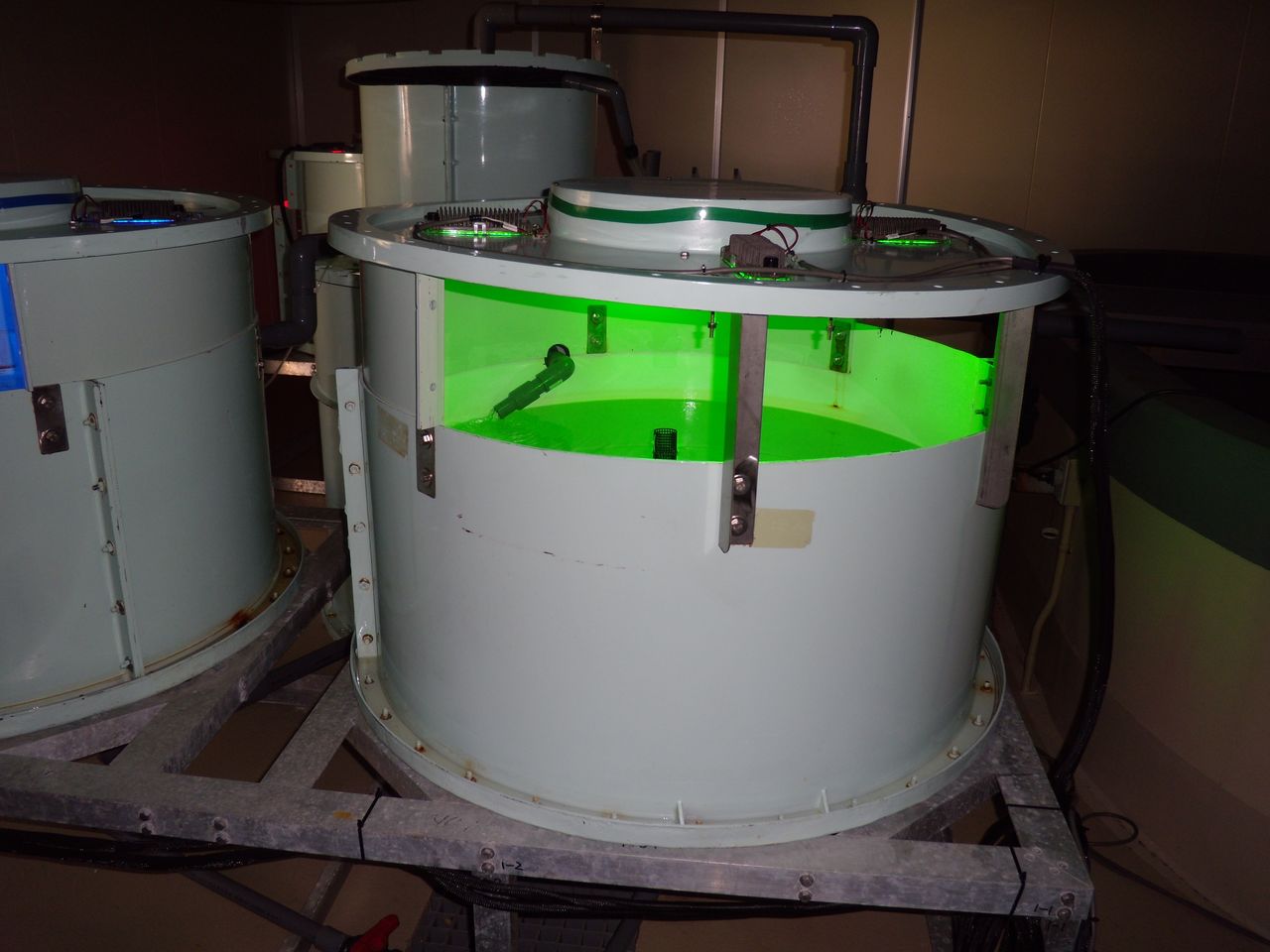 The team then replaced the fluorescent lighting and filter arrangement they had been using with a green LED unit developed by coresearcher Stanley Electric, which they found made the flounder swim more quickly, eat more, and grow faster.

But why were the flatfish more active under green light? Of the three primary colors that make up sunlight, they determined, green is the color that most readily reaches the fish’s seafloor habitat.

“Flatfish are very adept at discriminating between colors, particularly when it comes to their sensitivity to, and ability to differentiate, green light,” says Takahashi. He surmises that exposing the fish to light similar in color to the green they would experience in their natural habitat makes them hungrier and more active.

In the late 2010s, Takahashi’s team performed a similar experiment in which various colors of light were shone on spotted halibut and Japanese flounder, and found that green light had the effect of boosting growth in both varieties of fish. However, the green light had no effect on rainbow trout (order salmoniformes) or goldfish (cypriniformes). Other research has verified that green light has no effect on the growth rate of the red seabream or yellowtail (perciformes). 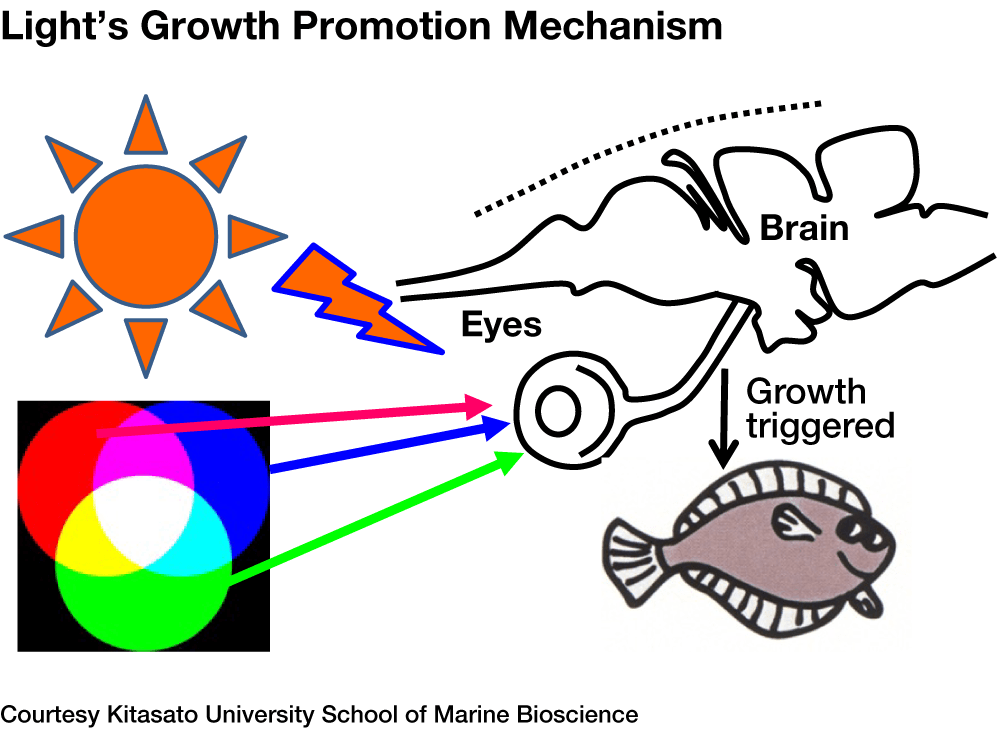 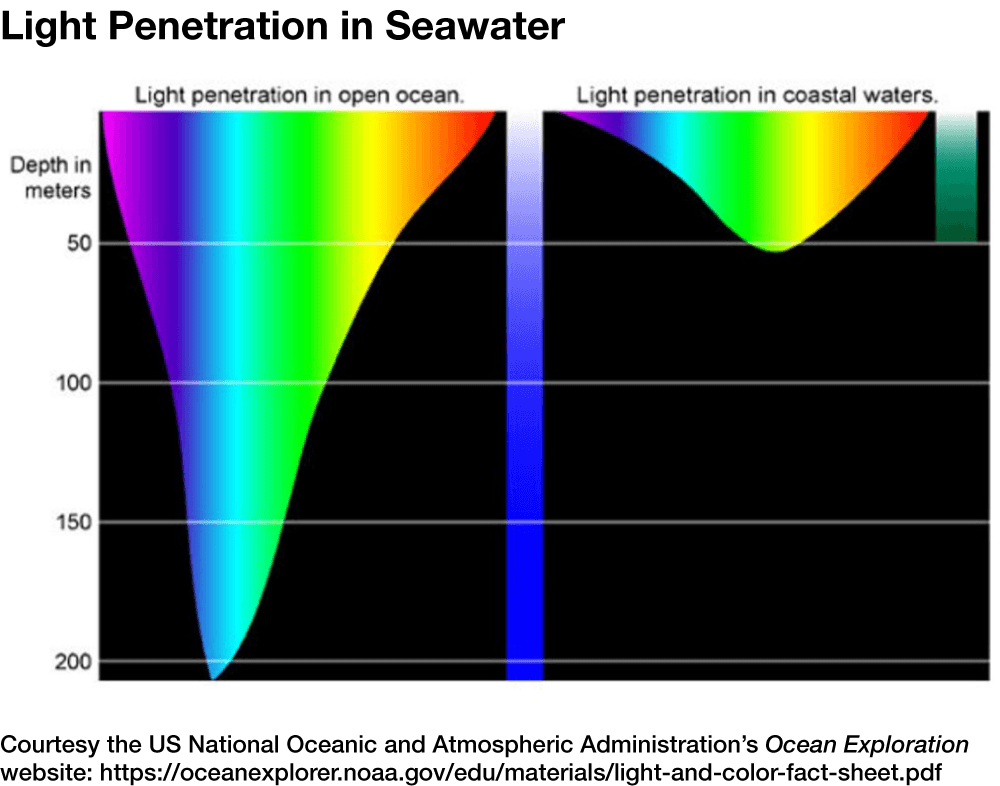 While we do not know how much larger flatfish might grow under green light, it has been confirmed that green light makes flounder grow 60% faster. The fish-farming industry picked up on these findings, and it wasn’t long before the technique had been commercialized. 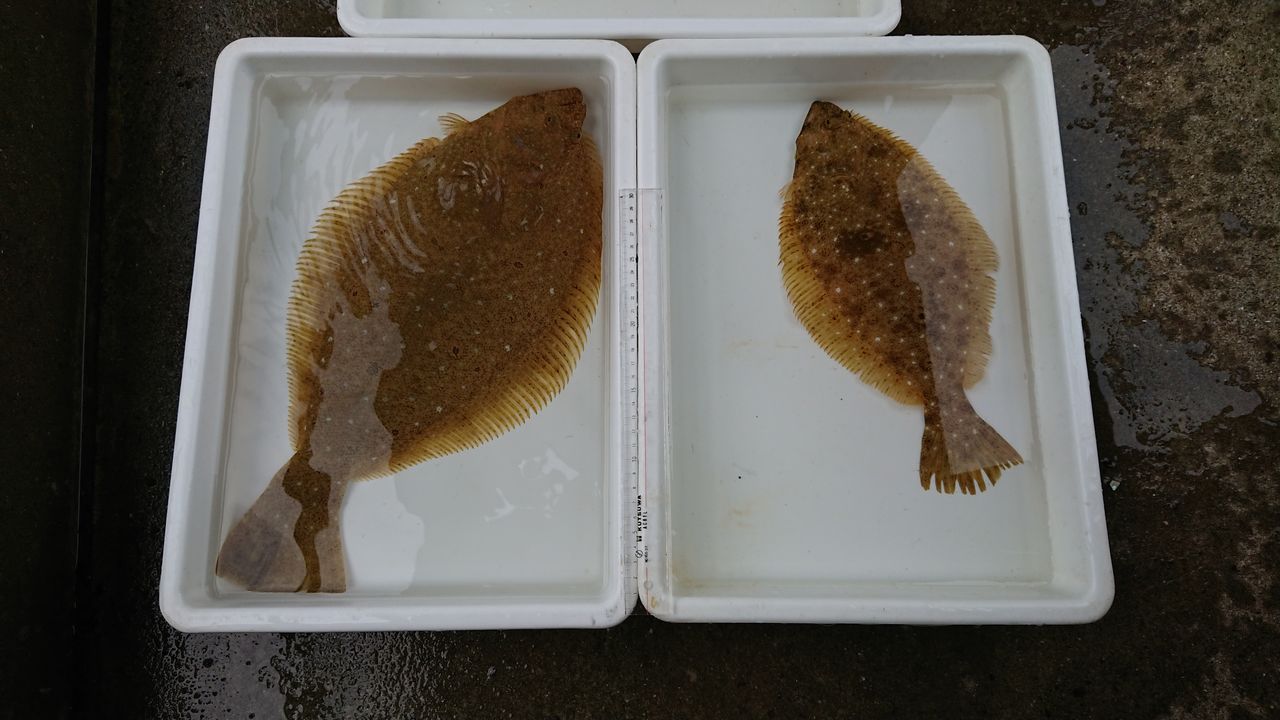 In Ōita, which has a major flounder-farming industry, the findings piqued the interest of researchers at the Prefectural Agriculture, Forestry, and Fisheries Research Center, which led to the technology being introduced at fish farms in the prefecture. This has led to local fish farmers using green LEDs to farm flounder, and several fish farmers in Ōita have now implemented the technology on a commercial level.

Flounder swim in a tank illuminated with green light.

Meanwhile, in Miyako, Iwate Prefecture, Takahashi’s research partner from the local branch of the Japan Fisheries Research and Education Agency joined forces with the local government and commissioned the Miyako fisheries cooperative to conduct a trial on onshore aquaculture of spotted halibut starting in 2019. The light-farming technology enabled the fish to be harvested after just one year instead of the usual two. Takahashi says he is pleased that work is underway to commercialize the technology, and hopes that green LEDs will enable farmers to produce plenty of healthy flounder.

At the same time, his scientific curiosity remains unsatisfied. “In terms of technology, we succeeded in inventing a method of light farming. However, the question of why green light is effective has yet to be completely answered scientifically.”

Takahashi has long been interested in the role of melanin-concentrating hormone as a growth promoter in flatfish. Observed to cause pigment concentration in salmon in 1983, MCH was also demonstrated to stimulate appetite in mice in 1996. It was when working on the flounder blackening issue mentioned above that Takahashi verified that flounder farmed in white tanks secreted MCH at much greater levels than those farmed in black or yellow tanks.

“It occurred to me that the MCH might both turn the fish white and stimulate their appetite,” he says.

However, Takahashi says that recent findings have forced him to revise his research plan, after he discovered that injecting MCH into the cerebrospinal fluid of spotted halibut actually caused their food intake to decrease.

“This might mean that while MCH does play a growth-promoting role in flatfish species, the role is not necessarily a leading one. I’m now studying this issue from a range of different angles.”

Understanding the mechanism that links exposure to light to growth promotion will result in scientific progress. At the same time, it will also give us understanding of what fish types are suited to light farming, and which environments are more suitable for the approach. If the technique becomes even more widespread, it may help solve issues like declining catches and declining self-sufficiency in food. 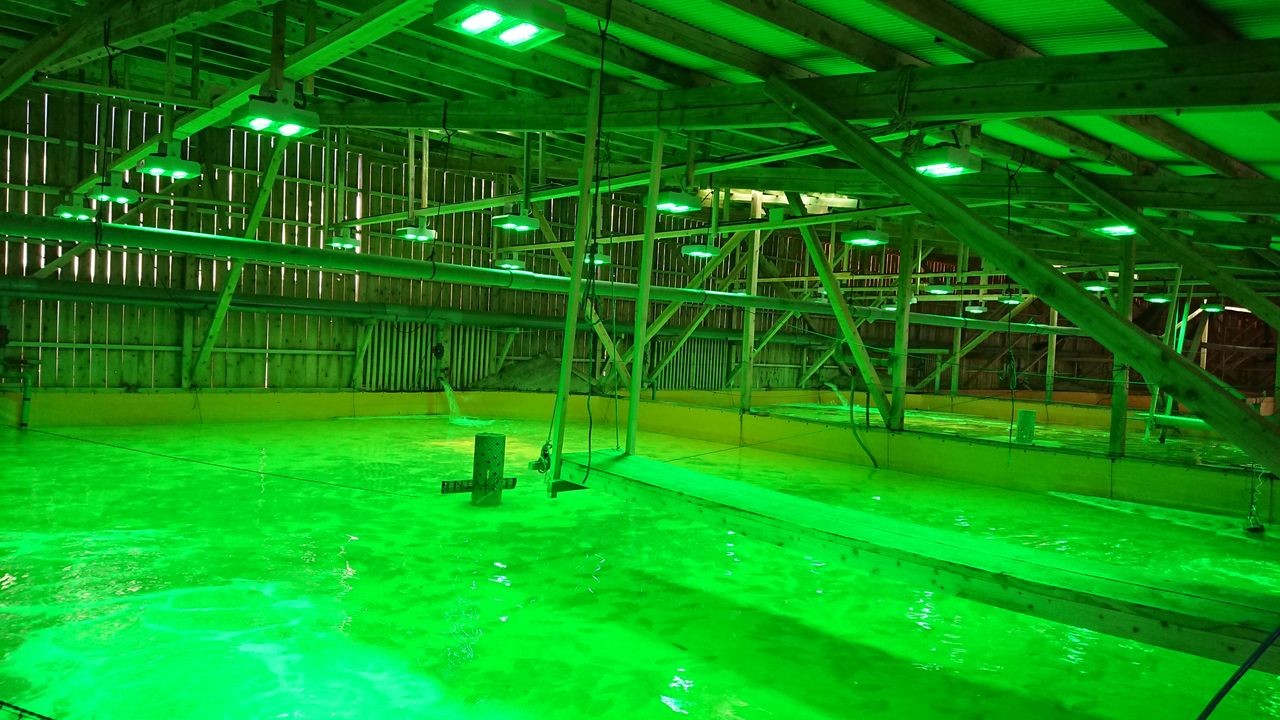 In addition to light farming, a number of other approaches aimed at promoting growth are being tested on a wide variety of farmed fish. One approach involves altering the formulation of the feed itself. Progress has also been made on approaches that utilize genome editing (a technique that targets specific base pairs in an organism’s DNA), with the approval for sale of a genetically modified, fleshier variety of sea bream in 2021, and attempts to harness genome editing to boost growth among puffer fish. 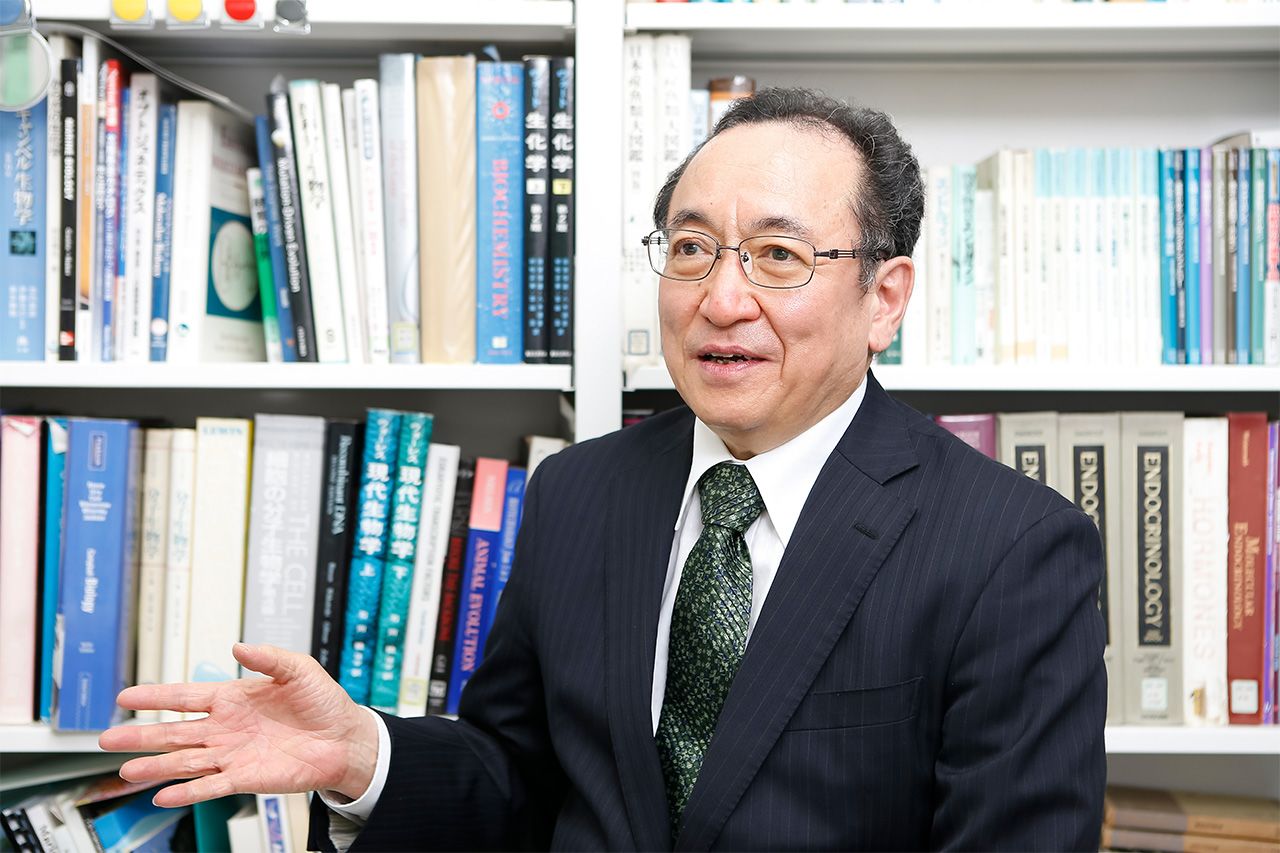 Takahashi Akiyoshi sees promise in this area, but plenty of work still to do. (© Yamamoto Raita)

Growth promotion has therefore turned into something of a race. What does Takahashi think?

“We should find what approach works best for each type of fish, then focus on that. Farmers of sea bream and yellowtail already use growth-promoting feed,” he notes.

As far as the flatfish family is concerned, Japanese flounder accounts for a mere 1% of total farmed fish production, making it a minor player. However, Takahashi says that this also means that much more potential for growth. He lists the challenges that need to be overcome if light farming is to catch on.

“The cost of the green LED units is an issue. Unlike white units, they need to be made to order, and have to be waterproofed and protected against corrosion. The energy used to power these LEDs can hardly be described as environmentally friendly, either. We need to start using renewably generated forms of energy.”

In terms of research into growth promotion mechanisms, Takahashi says that he has some goals he wants to achieve to propel the field forward.

“After the Kitasato University School of Marine Biosciences’ Sanriku laboratory in Ōfunato, Iwate Prefecture, was damaged in the 2011 Great East Japan Earthquake and tsunami, it was relocated to the university’s Sagamihara campus in Kanagawa Prefecture. To experiment with large fish like flounder and other flatfish, you need a reasonably large facility. While we’re currently using the laboratory of a research partner, the Miyako branch of the Japan Fisheries Research and Education Agency, in the future I’m hoping to find a sponsor so that we can perform experiments at the Sagamihara campus,” he says.

Both in terms of theory and practice, advances are still being made that have the potential to transform the future of aquaculture.