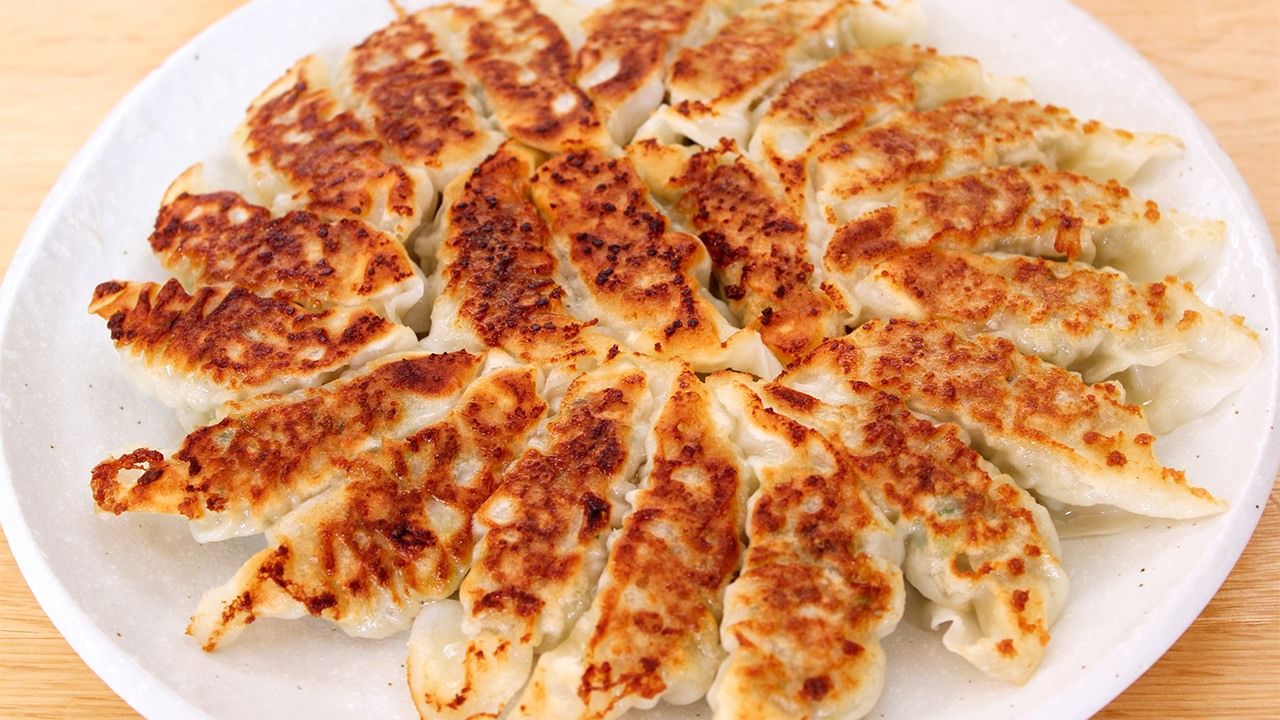 Food and Drink May 17, 2022
In January 2021, Miyazaki took the lead in Japan for gyōza dumplings purchased per household, beating perpetual leaders Utsunomiya and Hamamatsu for the first time in history. Here, two dumpling lovers give testimony to just what makes this little-known gyōza haven the best in Japan.

Top in Spending and Frequency

On February 8, 2022, the people of the city of Miyazaki rang in a historic day.

“Just now, I received the results of the Ministry of Internal Affairs and Communications Family Income and Expenditure survey. To start with, just like last year, we are first in purchase frequency. After a disappointing third place last year, we finally achieved first in average spent, too. I feel that this first place is a victory for all of us, and I want to offer my congratulations to everyone!”

The venue filled with the sound of applause, and the mayor presented Watanabe with a certificate of appreciation. Later, Miyazaki Airport started displaying a gyōza-shaped stainless-steel trophy made by local high school students.

There is clearly a Miyazaki gyōza boom going on, but I found myself wondering something. What exactly is this “gyōza leader” that they announce every February?

When I looked into it, I found that it is based on a ranking in the annual Family Income and Expenditure survey by the MIC Statistics Bureau. Japan’s top place is decided by the amount spent per household on gyōza each year. 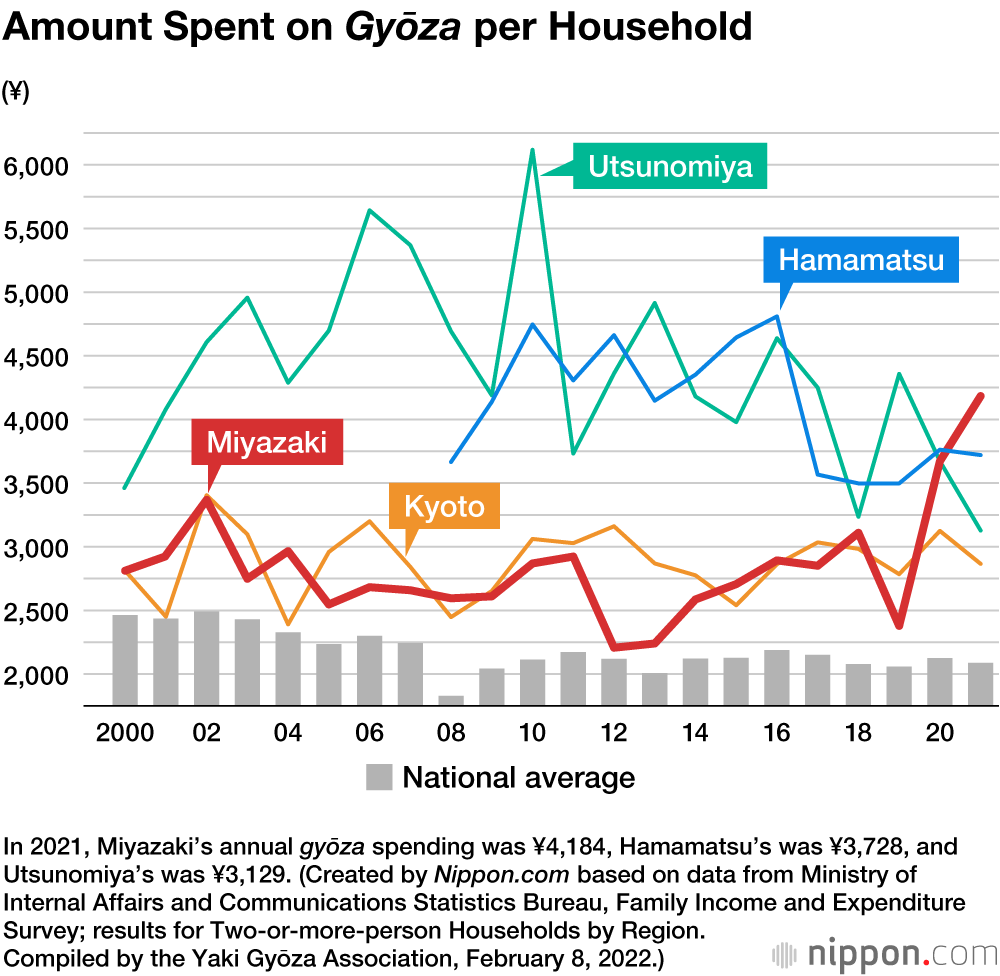 The trend of announcing this started in Utsunomiya, Tochigi Prefecture, in 1990, where the local government trumpeted the statistic to attract attention to its many local gyōza shops in an attempt at local revitalization.

The city installed a gyōza statue carved from locally excavated Ōya stone in front of the station, started a gyōza festival, and even enlisted popular entertainers to help sell Utsunomiya as a gyōza center. Every February, news stories celebrated Utsunomiya’s continued reign at the top of the gyōza market, and before long the Japanese public was imprinted with the indelible impression that “gyōza means Utsunomiya.”

The city held that top spot for 15 years straight. Then, with the emergence of friendly rival Hamamatsu, Shizuoka Prefecture, the gyōza game entered a new phase. Would the annual leader be Utsunomiya, or Hamamatsu? With the competition dominated by these two players, the whole country was taken by surprise when the Miyazaki Prefecture capital entered the game.

As articles about Miyazaki gyōza filled the Internet, we learned that someone calling himself the “Miyazaki Gyōza Prince” was involved in this latest twist. When I contacted him over social media to request an interview I got the OK, but the man who appeared on my screen, head wrapped in a gyōza hat, was perhaps a little old for the name “Prince.”

Miyazaki-ites Missed Out on Gyōza

The man behind the title is Tsuneyoshi Hiroyuki. He explains his encounter with Miyazaki gyōza, saying, “I went to an event called Gyōza Fes in Kanda, Tokyo, where you could try mail-order gyōza shipped in from all over the country. That’s where I learned how delicious Miyazaki’s offering was. Right around then, I was working as a writer based in both Miyazaki and Tokyo.”

Tsuneyoshi started researching the topic every time he visited Miyazaki. He asked everyone he met how often they ate gyōza, and found people often answered, their voices apologetic, “Only about once a week or so.”

Tsuneyoshi’s interest only grew. “Once a week is so often! Miyazaki was a hidden gyōza heaven!”

While I personally don’t eat gyōza that often, I found Tsuneyoshi’s enthusiasm over that once-a-week number almost infectious. 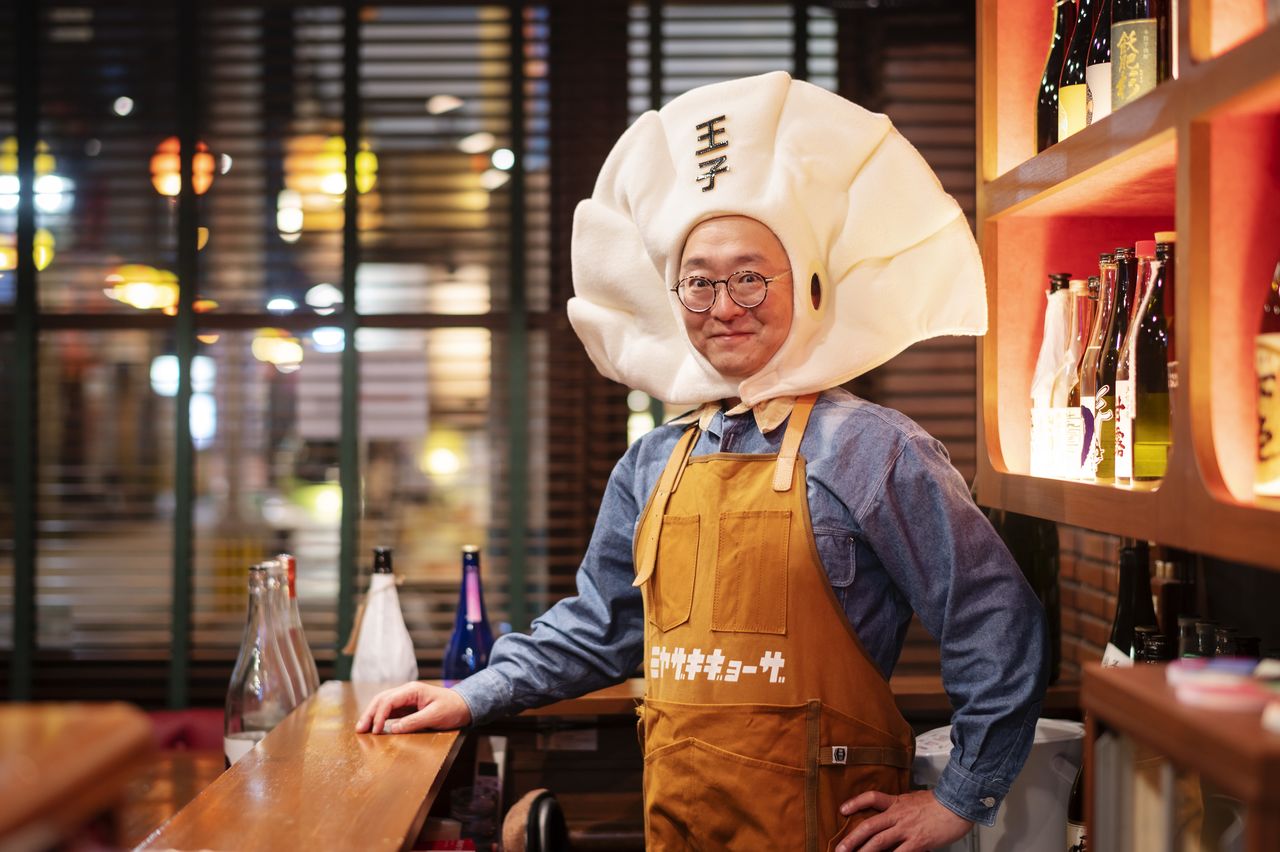 Within a few years of moving from Tokyo, Tsuneyoshi Hiroyuki became a self-christened Miyazaki gyōza evangelist under the name Miyazaki Gyōza Prince. He also promotes the “snack” bars of Nishitachi, as Miyazaki’s entertainment district is known. (© Tamura Masashi)

He immediately sent his findings to Onodera Chikara, head of Gyōza Fes and founder of the Yaki Gyōza Association. The two were of a like mind, their exchange full of comments like, “Miyazaki gyōza is much more impressive than I’d thought. And the residents at the heart of things don’t even realize how much they eat.” They quickly agreed on the need to make people more aware of Miyazaki as another national gyōza center, and hit upon the idea of holding gyōza event in the Kyūshū city.

Although the people of Miyazaki were doing fine just eating gyōza because they liked the dish, the two enthusiasts couldn’t help but take things to the next level and satisfy their urge to show off this wonderful world of gyōza they’d discovered.

The prince speaks lovingly of Miyazaki’s dumplings. “To start with, Miyazaki has a very unusual gyōza culture. When people visit relatives or friends at home, they take their favorite gyōza as a gift. And lots of families will keep a stock of their favorite shop’s gyōza in the freezer and share them out with neighbors.”

So, clearly the dumplings are a part of daily life.

“The way things are now, the real treasures are the local shops that keep ready-made gyōza in stock. Everyone has their favorite local spot, and there’s no gap in the market for the big chains. Even the big national chain Gyōza no Ōshō gave up after trying for around six years.” 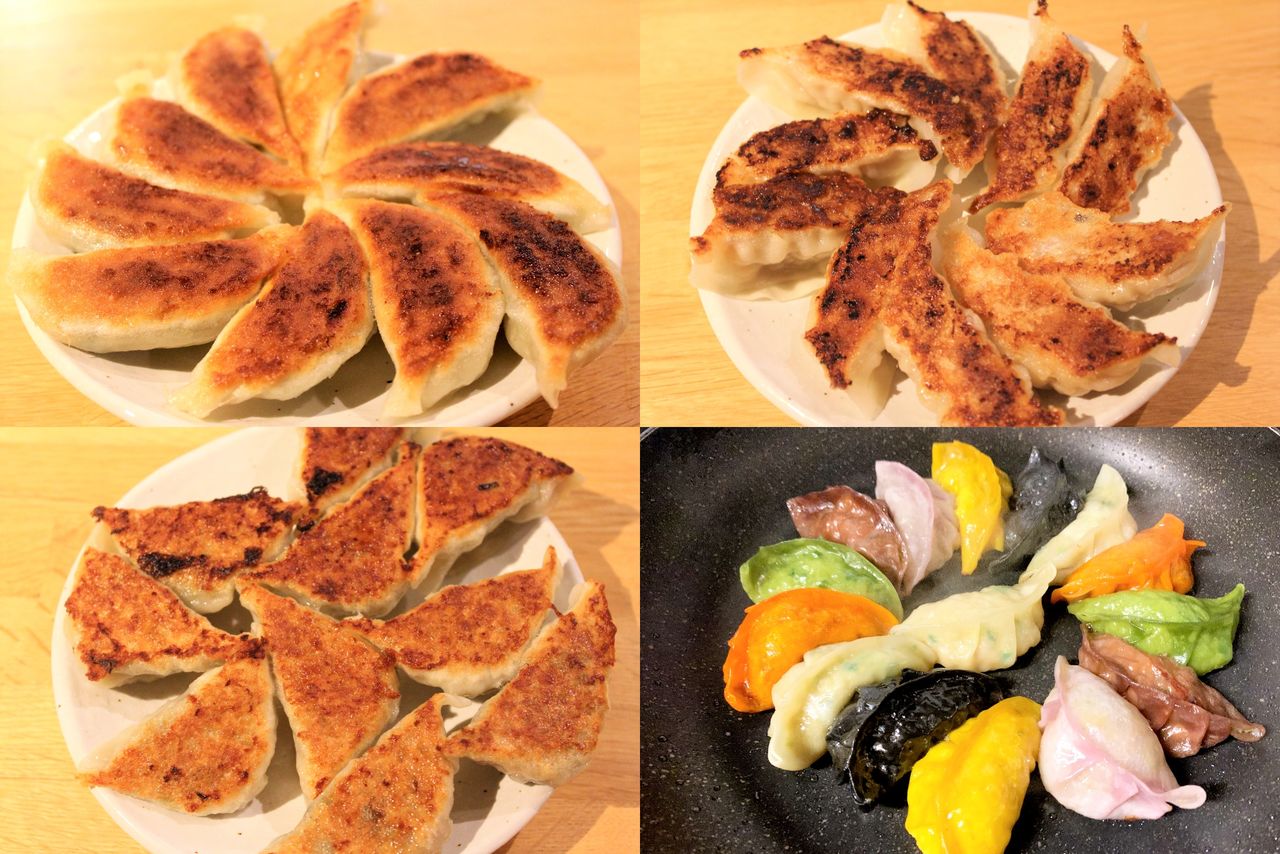 “Most people dip their gyōza in soy sauce, vinegar, or spicy rāyu oil, but in Miyazaki people use so much more. You might even call it a ‘dipping kingdom,’ too!”

Now that is news to me!

“People eat a lot of the delicious local produce raw, so they have a huge variety of salad dressings. They use them for gyōza, too.” For example, explains the prince, the hyūganatsu citrus dressing goes great on gyōza. People also use miso, yuzukoshō (a paste of yuzu and peppercorns), and tangy citrus and soy-based ponzu sauce. “They have just so many options!” he enthuses.

The ruler of this hidden gyōza kingdom must be Gyōza no Maruoka. At the mere mention of the shop’s name, the prince’s words grow even more passionate.

“Lots of Miyazaki’s gyōza makers started from butcher shops, and Maruoka is one of them. Their dumplings have a sweetness to them, and the outsides are so crisp. I just can’t stop popping them in my mouth!”

Maruoka has expanded into other prefectures like Kagoshima, Fukuoka, and Osaka, and each shop sells out nearly every day. The company sells between 260,000 and 280,000 dumplings a day. Maruoka is a takeout-only business, so customers just pay, pick up, and leave, but even so the line outside never disappears. 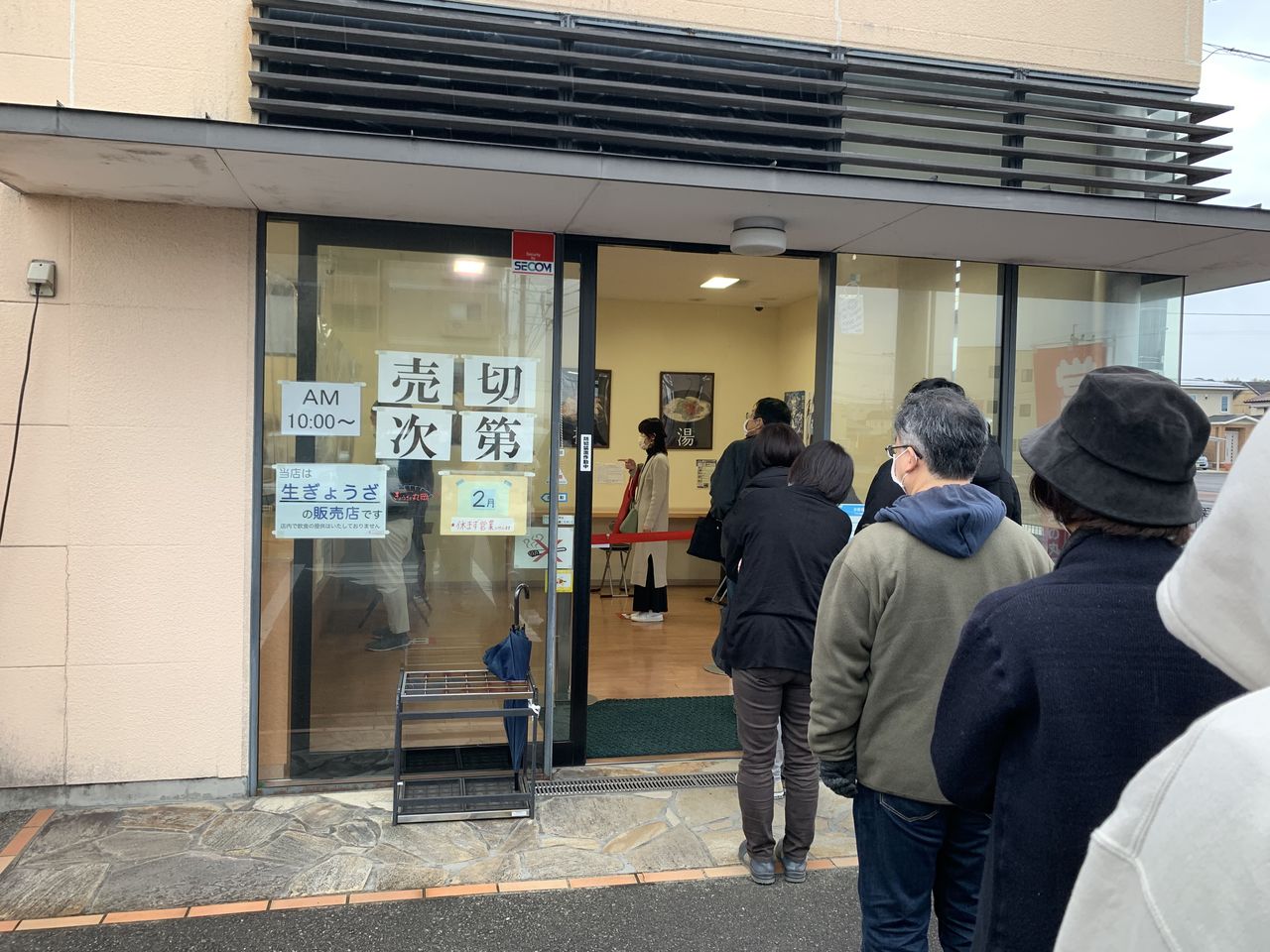 In addition to six shops in Miyazaki Prefecture, Gyōza no Maruoka has branches in Kagoshima, Kumamoto, Fukuoka, Hyōgo, and Osaka. In Miyazaki, the lines last until the shops sell out. (© Tsuneyoshi Hiroyuki)

The prince, so moved by Maruoka’s flavor, once asked for an interview but was unfortunately turned down. He seems oddly happy with the result.

“Maruoka said they were glad that people were learning about their gyōza, but now they’ve hit their production limit. The hundreds of thousands of dumplings that they sell each day are all handmade by women in Miyakonojō, and they can’t find any more staff.”

Onodera, the prince’s tag-team partner, adds, “Maruoka only sells fresh dumplings with a four-day expiration date. From a business perspective, they would do better with frozen dumplings, which would last longer and have more sales channels, but they insist on keeping them unfrozen so customers can enjoy the taste of fresh meat and vegetables. I think that’s so great.”

Valuing flavor over profit. That is what brings home the magnificence of Miyazaki gyōza.

Soon after he moved to Miyazaki, the prince approached the prefectural and municipal governments about setting aside a budget for promoting Miyazaki gyōza. Their response, though, was that Miyazaki already had plenty of food like beef, chicken, and farm produce to promote, so there was nothing left for gyōza. In the face of his persistence, though, they told him, “If we hit number one in Japan, then we’ll think about it.” The official who said that surely never imagined they’d actually take the top spot.

However, with the pair now knowing the fundamental power of Miyazaki’s gyōza, they set out to change local attitudes.

The Appeal of Outsiders Pushing a Local Product

The breakthrough came with the 2018 Miyazaki Street Gyōza Festival. Then, the prince appeared on popular local TV program Tsuzu-kun no Doyō da yo (It’s Saturday Morning with Tsuzu-kun!) On air, the hosts suggested, “If you’re so interested in boosting Miyazaki gyōza, why not become the gyōza prince?” and so, he did.

He’s not only active locally. The prince started pushing gyōza through Tokyo media, as well. He even used Miyazaki’s popular annual pro-baseball training camps to get gyōza articles run in sports media. On March 30, 2020, Onodera got a spot on popular national program Matsuko no shiranai sekai (The World Matsuko Doesn’t Know) talking about “mail-order gyōza“ and used it to push Miyazaki’s dumplings. 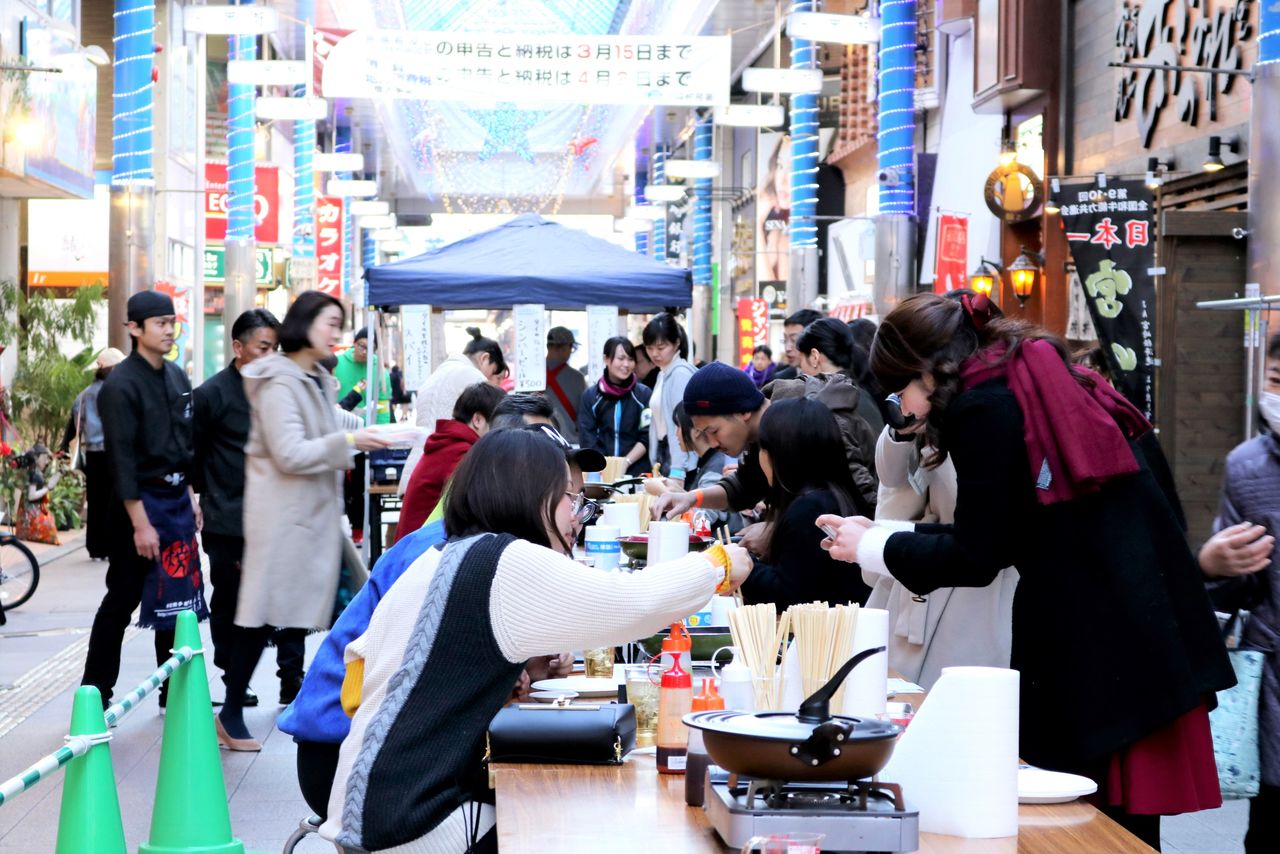 It was a two-pronged local and national strategy, and it paid off.

The prince says, “It’s part of the Miyazaki character. People like to get on board once things start getting exciting, and are really happy when people from outside the prefecture compliment them.”

As a native of the Gifu Prefecture countryside, I get what he says. There’s a certain shame in talking about your good points yourself. However, an outsider complimenting you is a huge boost.

It took time and hard work to build up momentum, but with these persistent Tokyo enthusiasts constantly building buzz, locals finally had to take things seriously. And then, faster than the pair had predicted, Miyazaki took the top spot.

One cannot ignore the influence of the pandemic, though. The ranking each February is based on that previously mentioned MIC survey. It only counts chilled fresh gyōza from supermarkets and takeout shops, not frozen ones or those eaten at restaurants. That is precisely Miyazaki’s specialty.

As the pair’s promotional efforts built local enthusiasm, the start of the pandemic Stay Home campaign encouraged Miyazaki residents to eat more gyōza at home than before.

The frequency and overall spending of at-home eating, which had already been growing, took a huge jump, and Miyazaki flew past Utsunomiya and Hamamatsu.

Now, Miyazaki is Japan’s gyōza leader. It took two enthusiasts to fan the flame, but it’s local makers who are the dish’s true longtime supporters.

Watanabe Aika, chair of the Miyazaki Gyōza Council who joyfully announced this year’s results, is one of those.

“We established the council in September 2019, and I put myself up for the chair election. I did it because I was born into a gyōza-making family, and I truly believe that gyōza have helped keep me going my whole life.”

She wanted to repay that favor. During her single-minded efforts as chair, Miyazaki finally became Japan’s gyōza top, and now she is dizzyingly busy, with three or four media interviews a day. 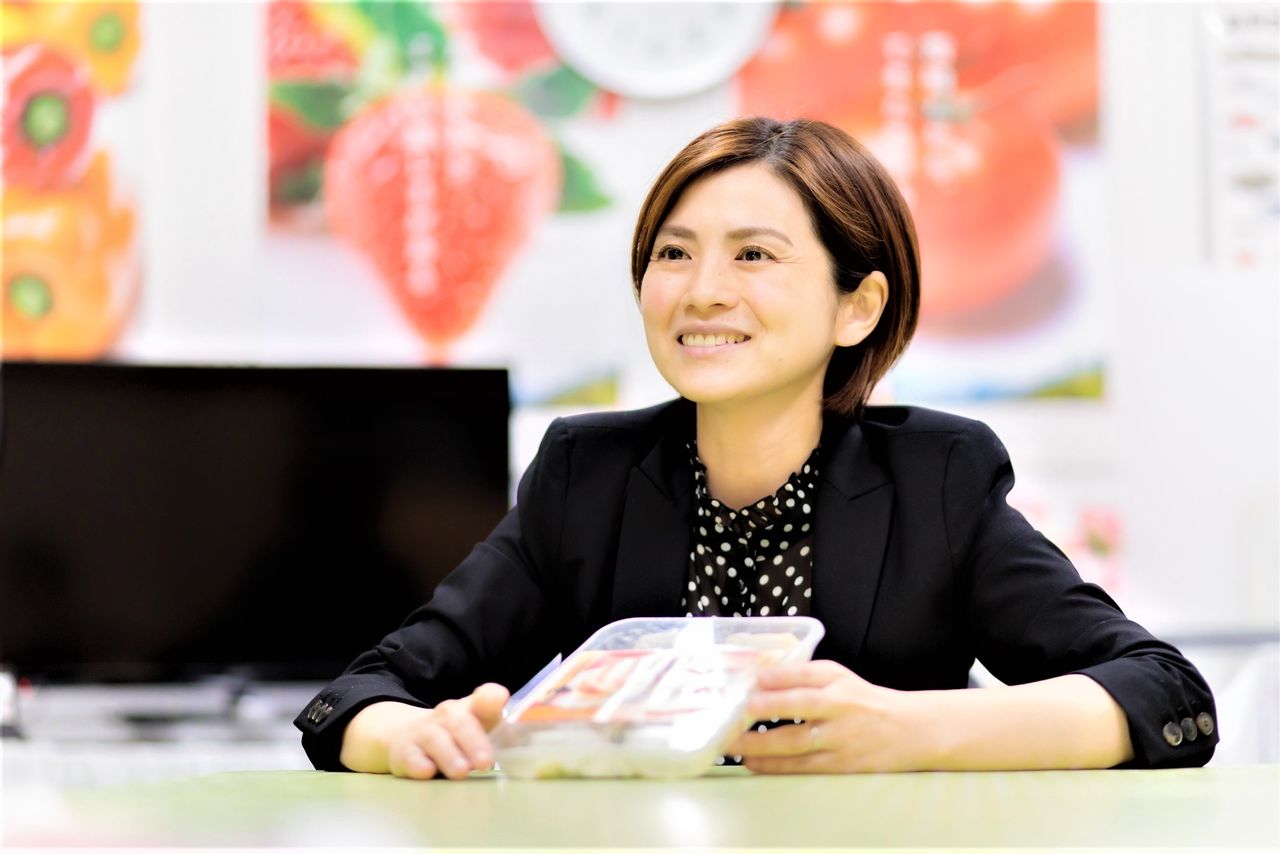 Watanabe Aika is chair of the Miyazaki Gyōza Council, a group full of unique characters. According to the prince, “Watanabe is what keeps the council together.” (Courtesy of Watanabe Aika)

It’s a happy story, how the meddling of two enthusiast outsiders led to the hard work of those on the ground being finally rewarded.

Even though his goal of taking Miyazaki to the top has come to fruition, the prince still has much to tell fans.

“Miyazaki has been named Japan’s top gyōza town, but there’s more to it than just the city. The whole prefecture loves gyōza, and the people of Takanabe in particular eat so many dumplings it’s almost hard to believe.”

There is no sign of the prince’s gyōza passion abating.

(Originally published in Japanese. Banner photo: Gyōza no Maruoka is a true favorite of the Miyazaki Gyōza Prince. They are available in refrigerated packs of 50 for ¥1,300. © Tsuneyoshi Hiroyuki.)