Culture Lifestyle Mar 3, 2016
Traditional Japanese cuisine relies on a wide lineup of seasonings, many of which are derived from soybeans and brewed using long-established methods relying on specific mold cultures for fermentation.

The ABCs of Japanese Seasonings

Japanese cuisine features a long list of seasonings, or chōmiryō, that enhance and bring to life the various tastes of washoku. The basic flavor enhancers are satō (sugar), shio (salt), su (vinegar), shōyu (soy sauce), and miso. A common mnemonic trick in Japanese to remember the order each seasoning is to be added to dishes is to think of the sounds sa-shi-su-se-so, with soy sauce represented by se (due to the old orthography that wrote shō with the characters seu) and miso represented by its final syllable.

Starting with an edict by Emperor Tenmu in 675 banning the consumption of domesticated animals, Japanese for over a millennium forsook meat—though some in mountainous regions ate wild game—with the Emperor Meiji finally lifting the sanction in 1871. Deprived of the savory flavors of pork, chicken, and beef, inhabitants instead turned to konbu (kelp), katsuo (skipjack tuna), and other marine products, as well as soybeans, to provide the savory umami taste.

Seasonings were primarily made by fermenting beans and grains, although there are examples of fish-based sauces similar to those used in Southeast Asian cuisine. Since ancient times rulers have enacted laws governing the production of essential seasonings, with the earliest reference to such regulations dating back to 701. These seasonings, produced with less-refined methods, gradually evolved into the soy sauce and miso commonly consumed today. 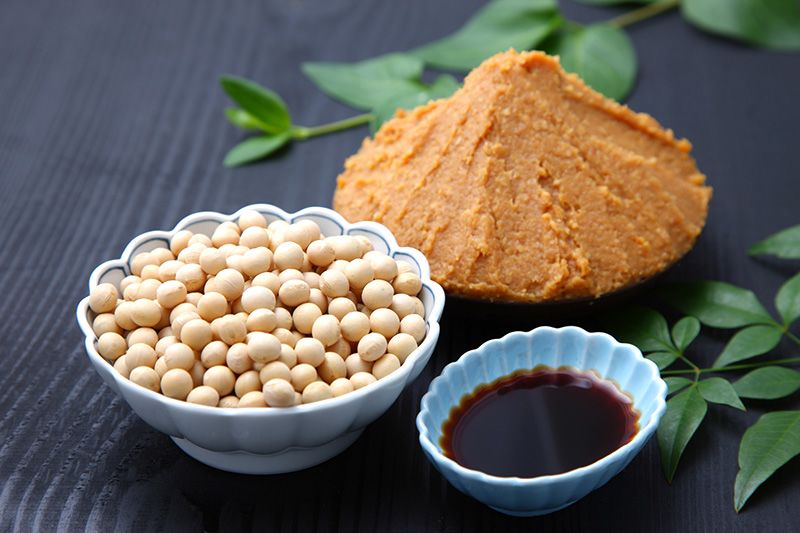 Soy beans are a key ingredient in miso (top) and soy sauce.

The Important Role of Mold

Japan, with a relatively damp climate marked by prodigious rainfall and humid summers, is no stranger to mold. While not all fungus varieties are appreciated, there are some that have been carefully cultivated for brewing and fermentation. For example, the work of Aspergillus oryzae, Japan’s most representative species of kōji-kin mold, turns mixtures of soybeans, wheat, rice, and salt into soy sauce or miso.

But the importance of the genus Aspergillus goes beyond just these two seasonings to include the brewing of vinegar, sake, mirin (sweet cooking sake), and shōchū, as well as the curing of katsuobushi (dried bonito flakes), an all-important ingredient in creating dashi or stock. Japan’s 1,300-year relationship with the mold has produced preserved fare like tsukemono (pickles) and staples such as miso soup, as well as famous national delicacies including sushi, yakitori, and sukiyaki.

Japan’s regions have also developed a wide variety of distinct chōmiryō. One such example is Akita Prefecture’s gyoshō, a light fish sauce used widely in the area to flavor nabe (hot pot) as well as ramen.

One local condiment that has recently spread across the country is yuzukoshō. Originating in Kyūshū, the fragrant, spicy paste combines yuzu (Japanese citron) and green chili (aotogarashi). Not only does it liven up dishes, it also boasts antibacterial properties similar to wasabi, and like sanshō (Japanese pepper) sprinkled over grilled eel, it enhances the pleasant fragrance of dishes. 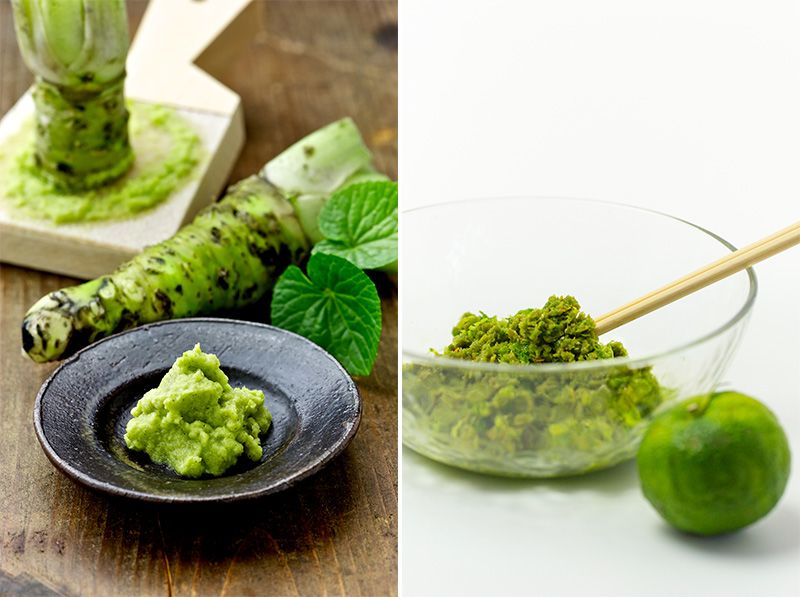 While stock is known by many different names, its savory flavor serves as a pillar in nearly every culinary tradition. In Japan the standard broth used to infuse dishes with umami is konbudashi, which is derived from kelp. In 1908, the Japanese chemist Ikeda Kikunae identified the exact amino acid giving konbu its savory taste. He named it umami, and in 2002 scientists placed it with salty, sweet, bitter, and sour to form a pantheon of five flavors.

While a much touted aspect of Japanese cuisine, umami has been pleasing palettes since ancient times in such foods as prosciutto, cheese, tomato, and anchovy. Chefs around the world now refer to umami by name, however, and use it to provide a savory touch to dishes. 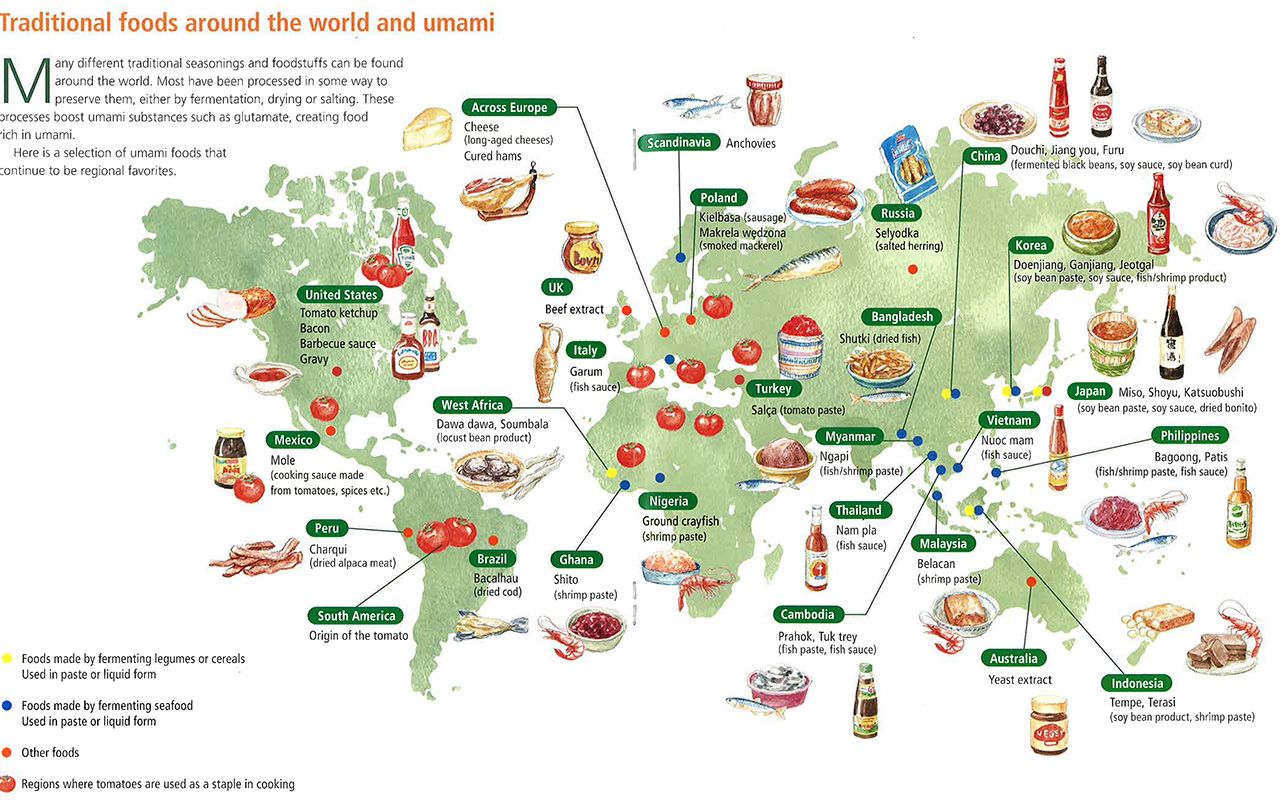 Along with konbu, Japanese stock can be made using katsuobushi, niboshi (dried anchovies), shiitake mushrooms, and other bases. Connoisseurs wishing to experience different flavors can do so at a dashi bar in Tokyo’s Nihonbashi district. Not everyone has the time to create stock from scratch, however, and supermarkets, convenience stores, and other shops carry a wide selection of instant liquid and powder stock. These easy-to-use packets have not only become standard in Japanese kitchens but can often be found at shops overseas, providing an easy way to create the flavors of Japanese cuisine.

Japanese seasonings like soy sauce and miso have developed and evolved over centuries, helping form the country’s diverse gastronomic tradition. Now, as the popularity of washoku grows, culinary terms like sake and wasabi have joined lexicons around the world. And as people continue to discover the versatility of Japanese seasonings, dashi and konbu may soon follow.

(Banner photo: Mari, an inn on the island of Shōdoshima, provides guests with a seasoning taster featuring four types of soy sauce.)