Ramen vs. “Washoku”: The Changing Face of Japanese Cuisine

Society Culture Jul 17, 2015
Ramen has gone global, with more and more shops opening up worldwide in the twenty-first century just as they spread rapidly throughout Japan in the twentieth. Yet the upstart noodle dish’s place within Japanese cuisine is still ambiguous. It stands as a kind of rival to the more established tradition of "washoku," recognized by UNESCO as an intangible cultural heritage in 2013.

At the end of 2000, Harvard anthropologist Ted Bestor penned a seminal article in Foreign Policy on how sushi was going global. Bestor noted that although Japanese cuisine was off the radar for most international diners until recently, by the start of the twenty-first century, eating sushi had acquired the patina of cosmopolitanism. By December 2013, international attitudes toward Japanese food had shifted to the point that the world reverberated to the announcement that traditional Japanese cuisine, distinctly hard to define though labelled as washoku, had succeeded in gaining the support of UNESCO as an intangible cultural heritage.

This is all heady stuff because we should remember that with few exceptions, Westerners loathed Japanese dining, and vice versa, for most of recent history—and the Chinese did not think too highly of it either, for the most part. In 1854, when Matthew Perry’s black ships reappeared on Japan’s shores, the mission hosted Japanese shōgunate officials on the USS Powhatan to what the Americans considered a rich feast. As expected, the Japanese returned the favor several weeks later but Japan’s first foray into international banqueting was a culinary disaster. The American sailors found most of the food inedible and “too fishy.” In the official nineteenth-century log of the trip, Perry and his men report being unimpressed by the quantity and taste of Japanese food. Examples like this abound on both sides of the ocean, leading us to conclude that much has changed—Western palates have adapted and so has the content of Japanese cuisine itself.

Regardless of all the rhetoric, Japan’s “gastronationalism,” or extreme pride in its own food, is a rather recent development. It would be hard to argue that the Japanese today eat as they did 150, 100, or even 50 years ago. The consumption of sugar, eggs, meat of varying kinds, and wheat products has skyrocketed, whereas rice consumption continues to decline steadily in the postwar era.

A Sea of Ramen 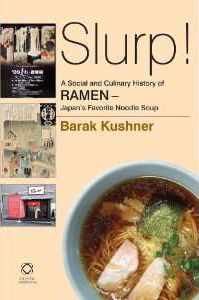 The 2012 book Slurp! explores the history of ramen from Chinese origins to its place in modern Japanese pop culture.

After I wrote my ramen history Slurp! I was asked by more than a fair share of Japanese newspapers and publishers, why now? Why was there a boom in ramen sales in the West, or in Japan for that matter?

In contrast to the stereotype of a delicate and fairly bland washoku, contemporary Japan almost floats on a sea of various forms of ramen. Currently, the world devours close to 103 billion packages of instant ramen a year, and ramen accounts for a significant portion of meals eaten outside the home in Japan. At last count there were tens of thousands of ramen shops throughout Japan, as well as films, cartoons, songs, television shows, magazines, books and blogs—a virtual avalanche of popular culture, all focusing on ramen. This is now starting to trickle out to the rest of the world—there is a Michelin-starred ramen restaurant in Hong Kong and a recent surge in ramen dining in London, which supposedly has more than 20 shops. A young entrepreneur in London, Aaron Resch, completed his MBA with a dissertation on how to open a ramen franchise. His own ramen shop combines classic tastes and those based on more conservative British tastes, such as “Bulldog Ramen,” featuring beef and Yorkshire pudding. Ivan Orkin, whom I interviewed back in 2009, has parlayed being a gaijin who cooks up ramen into an international phenomenon, boasting devoted followers in Tokyo and New York City. Ramen has gone global. But is it Japanese? 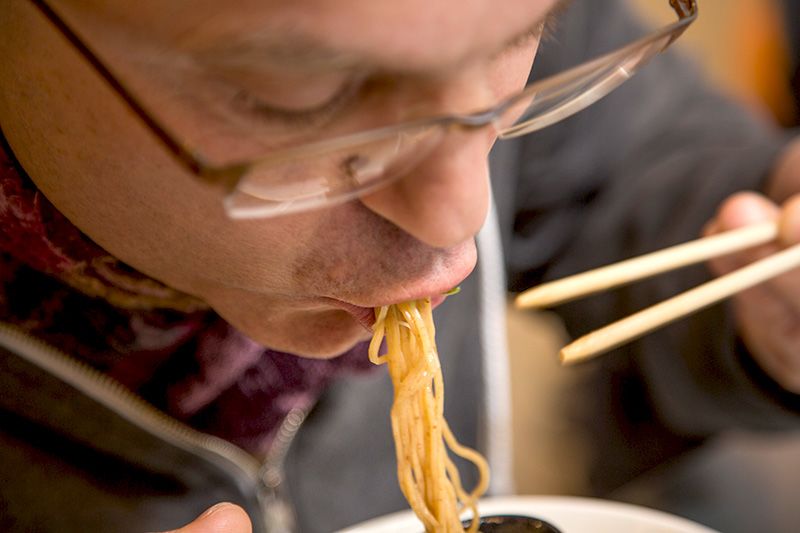 Ramen Chef Ivan Orkin demonstrated how to eat ramen for a New York Times article when he opened Ivan Ramen Slurp Shop in New York in 2013. ©The New York Times/Aflo

Why has ramen perhaps taken over as the archetypal example of Japanese food even though it is apparently considered insufficiently Japanese to be listed as such in the UNESCO application?  Is ramen popular because it is full of umami, or due to some other factors? We should note that the entire ramen boom, which really took off in the early 1990s, intersects with the precise downturn of the Japanese economy and the rise of what has been labelled as Japan’s “lost decades.” In short, the international ramen explosion that is now happening has less to do with government promotion and the limited success of establishing washoku as a world cuisine and more to do, perhaps, with the fact that, like the sandwich, ramen is a “platform food” that can easily be adapted to local tastes. 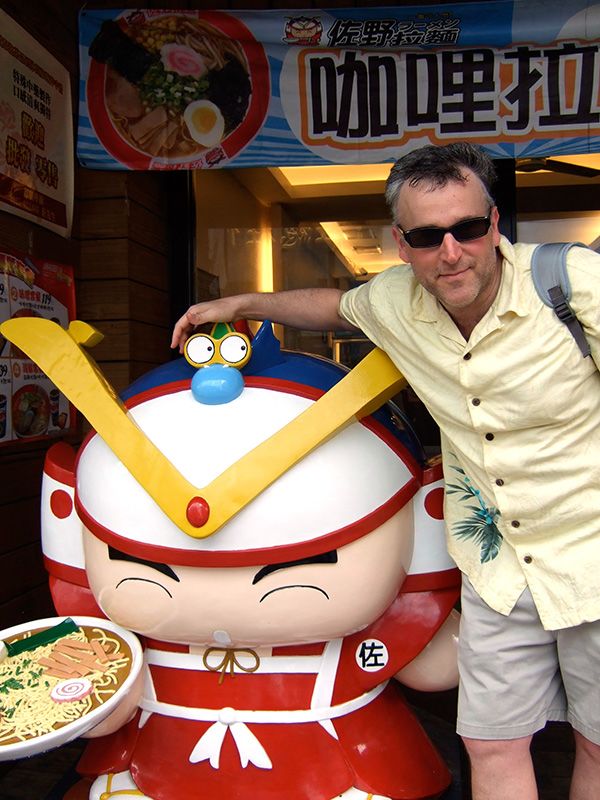 The author in front of a “Japanese style” ramen shop in Taipei.

Ramen is Japan! To many, it embodies the culmination of the country’s postwar history. The noodle soup has left an indelible mark on Japanese society and fused itself so tightly to contemporary culture that a Japan without ramen is unthinkable, as several corporate executives and ramen consultants told me in interviews. It is not just because ramen is a tasty diversion but more because ramen itself has become a staple consumer element deeply tied into popular culture and is, more importantly, a face of Japan to the wider world. Like Sony, Toyota, and Panasonic, the rise of ramen parallels Japan’s rise from the ashes of World War II into an economic powerhouse. And it is not only Japanese who have made this connection between ramen and their country’s popular culture. A cursory look at how ramen is sold around the world demonstrates that selling ramen as a Japanese product is good for sales. In Taiwan, a country with its own long noodle traditions, ramen is often expressly sold as rishi or in the “Japanese style,” to set it apart from native competitors. And it is frequently more expensive as well.

I propose that ramen has successfully developed, in a way different from sushi and other “exotic” Japanese foods, as an item linked to locale and popular culture. In addition, ramen has now become a “brand idea” in Japan, specifically shaping and promoting certain regional characteristics in the minds of consumers as a way of divvying up the dizzying homogeneity of contemporary Japan.

In Search of Local Flavors

In Japan, the new food paradigm of gotōchi has emerged—essentially a search for the greatest delicacy in each region. The Japanese have now tied consuming food into its own form of popular culture so that the pursuit of delightful eating has evolved into a national pastime. This “food tourism” has become a stand-in for other forms of entertainment. The hobby can also be attributed largely to two factors: the increasing homogenization of the Japanese hinterland and the need for regions beyond the megacities to compete for revenue. While the overall population of Japan is decreasing, the percentage of those living in the three major cities—Tokyo, Nagoya, and Osaka—continues to rise. This geography of change in Japan was further accelerated by the Heisei daigappei, a series of administrative mergers in the Heisei era (1989–), which saw the number of municipalities reduced from 3,232 in 1999 to 1,730 in 2010. This meant that the concept of a unique and local flavor virtually halved over a decade in most of the country.

One way to combat this inexorable population exodus/amalgamation and subvert the ensuing economic decline in Japan’s periphery over the last two decades has been to promote local cuisine. With the advent of local branding, there is now a B gourmet Grand Prix, launched in 2006 and hosted annually. As its website illuminates, this competition is not about the food or sales but rather about publicity for the locales themselves, through food. There is almost no greater contender in this regional race for distinction than ramen, which already had a loyal following. Mirroring a trend among ramen producers during the early years of ramen’s growth during the 1920s, the establishments utilize their “local flavor” as a vehicle to distinguish their product from others. According to the Ministry of Agriculture, Forestry, and Fisheries, there is a fantastic economic incentive to participate in such measures to boost local cuisines as a product that already has won acclaim.

Postwar Japan is a hybrid conglomeration of tastes and cultural influences, just as it was during the early Meiji era (1868–1912), with Chinese compradors and Western businessmen. As the French bask in their gustatory glory and British ponder their national cuisine, Japan’s reactions to the international rise in stature of its national cuisine(s) appear at best ambivalent. Ramen has taken the world by storm but its popularity has also caused uneasiness. Some Japanese felt threatened by the fact that their supposedly unique diet was now available throughout the world and at first waffled in the face of this new culinary fame.

In 2006, the Japanese government announced its intention to consider a licensing system to standardize and authorize what Japanese officials believed were “authentic and qualified” Japanese restaurants, as opposed to those “wholly unconnected to Japan.” A web link allowed patrons of any restaurant abroad to report on the “Japanese” quality of their dining experience to help the ministerial department collect data. What exactly denoted “Japanese” quality remained unclear, though, and the plan was soon quashed.

However, the plans also called into question long-held and perhaps inadequate beliefs about the timelessness of Japanese cuisine. Indeed, one of the major ideological shifts in identity during the Taishō era (1912–26) was the incorporation and consumption of Chinese food and its influence on the Japanese cuisine and diet, even as the very concept of Japanese cuisine was forming. Japanese cuisine, once thought to be so unique and rather grotesque outside of Japan, now dominates plates across the world. The sticking point, however, remains a discussion about what dishes should represent this transformation—washoku or ramen—given that both supposedly are Japanese. The Japanese themselves often seem confused—in a 2007 questionnaire of Japanese returning from abroad, the largest percentage of Japanese wanted to eat their national “comfort food.” This was not sushi or soba or some element of washoku, but ramen. Ramen arguably now defines how the Japanese eat and has become a mainstay of how the rest of the world views it. We would do well to heed the evolution of Japanese cuisine and see it for what it is—an invented tradition that is in constant change, not a timeless museum artifact.