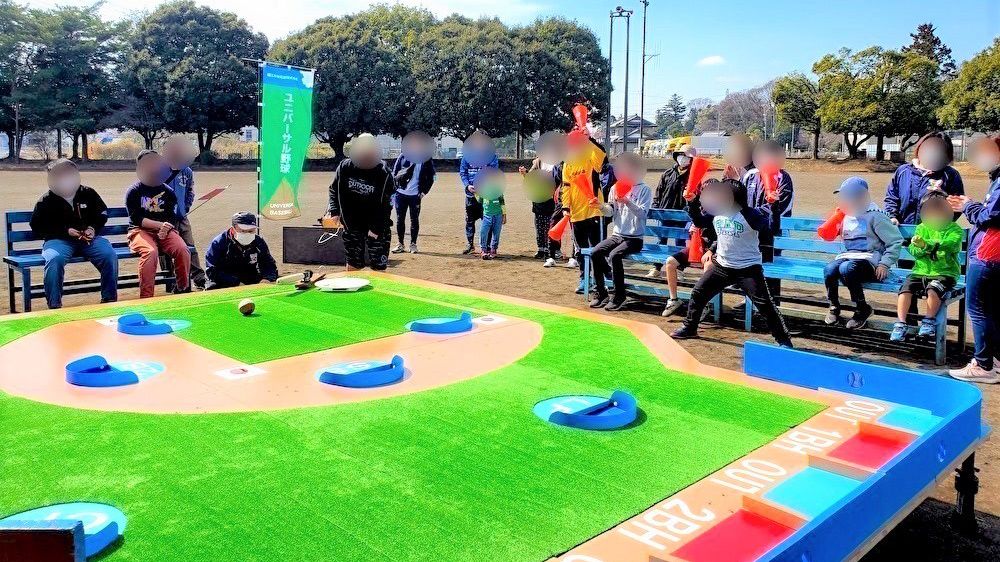 Sports Society Education Family Health Jun 21, 2022
Nakamura Tetsurō created Universal Baseball so children could enjoy the thrill of the sport regardless of their physical abilities. Played on a large board modeled on a baseball field, it puts young fans at the center of the action. The game has given Nakamura the opportunity to turn his passion into his occupation.

Early April in Tochigi Prefecture is typically a time for enjoying cherry trees in full bloom. But at a park in Mooka on this Saturday morning, a brightly colored model of a baseball field vies with the blossoms for attention. It took Nakamura Tetsurō a little under an hour to assemble. Built to 1:20 scale, the replica measures 5 meters across and resembles a giant board game.

The board’s makeup is captivating. Home plate consists of a turntable and specially designed batting device, while the field is dotted by areas marking hits and outs, including one labeled “home run.” There is even a giant scoreboard behind centerfield.

The game is titled yunibāsaru yakyū—Universal Baseball. To play, participants pull a string to start a bat swinging, which sends a ball shooting across the board. The spot where the ball stops determines batting outcomes like hits and outs. Like in a typical baseball matchup, teams pit strategies and skills against each other in an all-out effort to win.

A little past noon, a group of children, joined by their guardians and helpers, begin to congregate around the Universal Baseball board. Soon, a game gets underway and the tranquil atmosphere of the park is transformed by the vibrant sounds of cheering.

Nakamura’s life revolves around Universal Baseball. He spends his time transporting the board to different locations in Japan for games. When on the road, he often sleeps in his vehicle, curling up in whatever space is left among the tightly packed pieces. 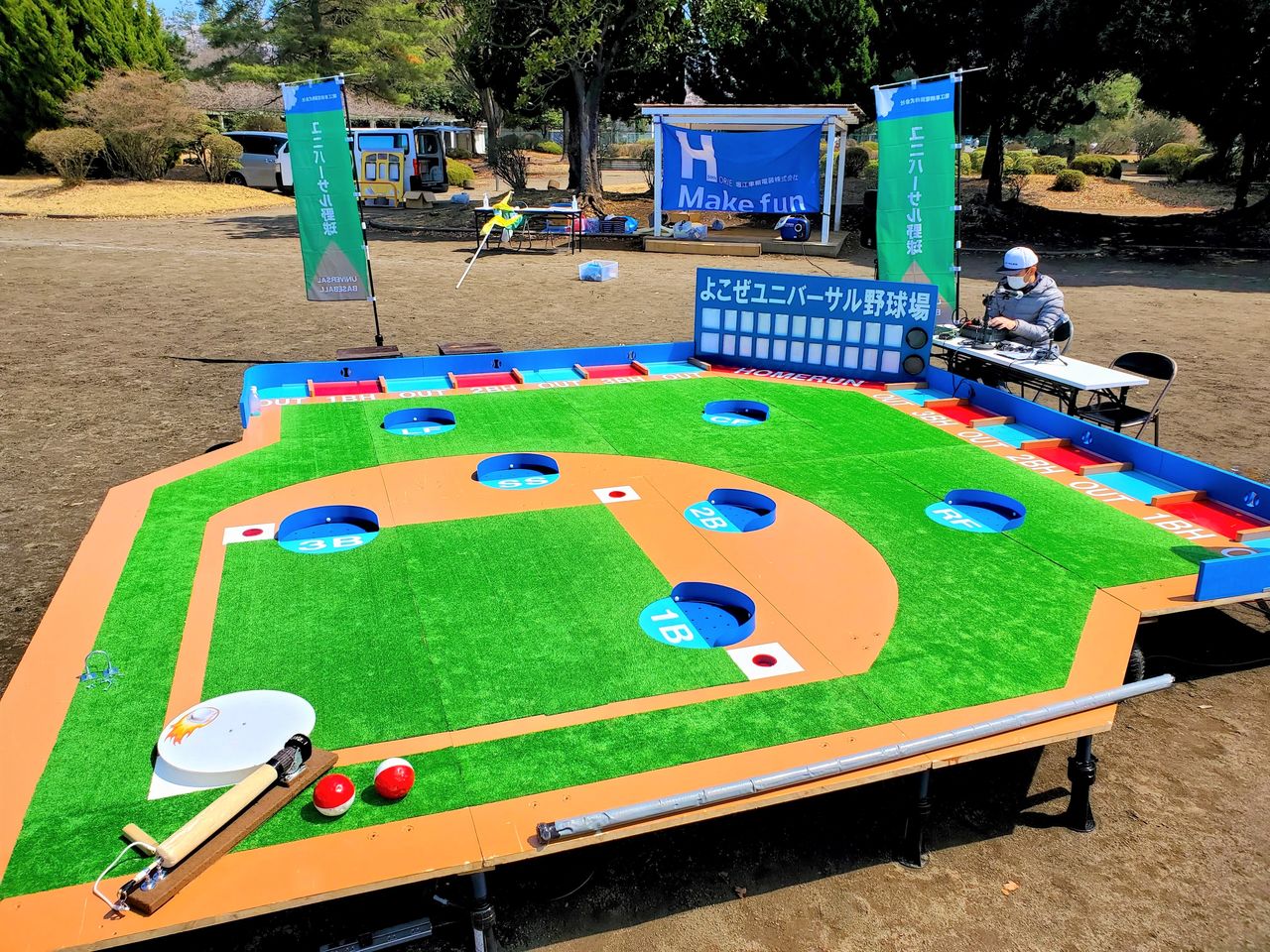 The Universal Baseball board, fully set up and ready for a game. 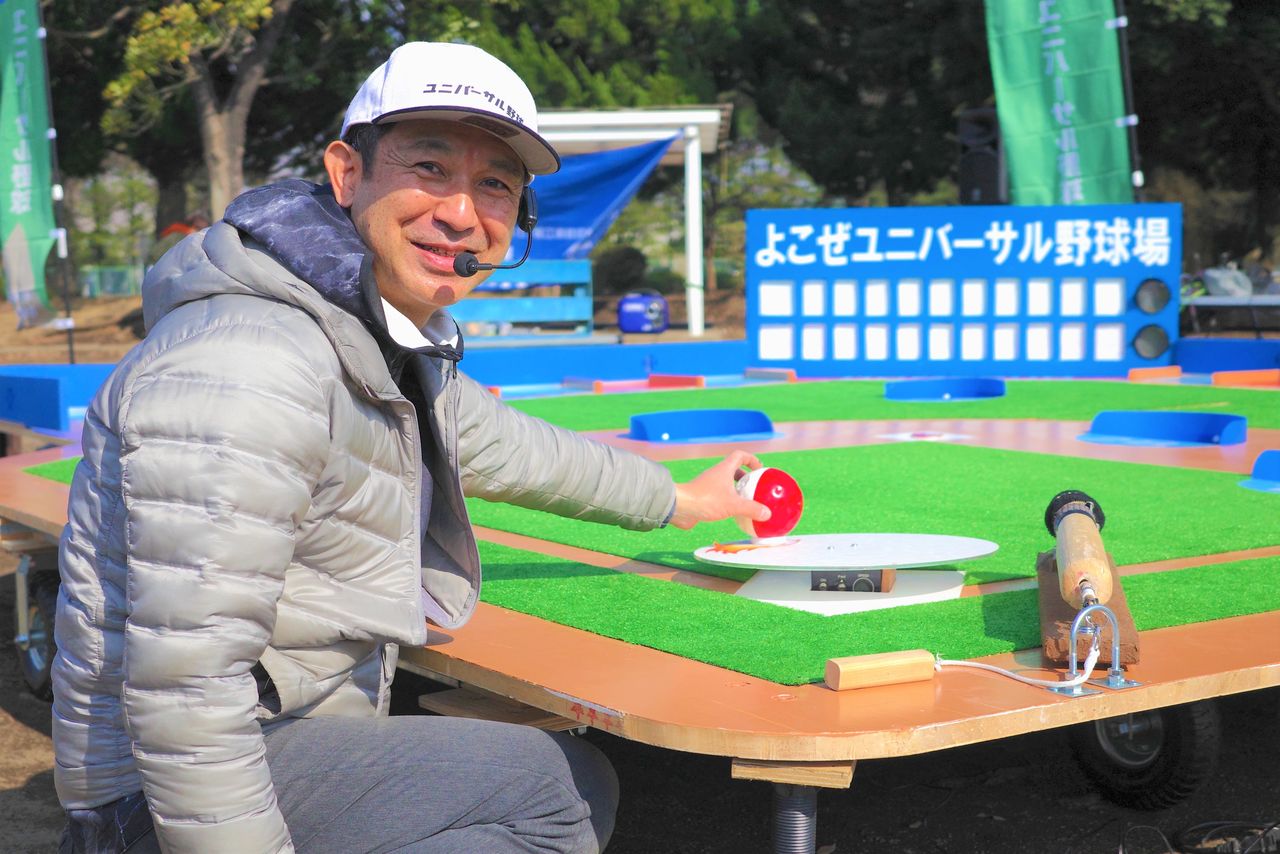 Nakamura Tetsurō uses the board to introduce people of all ages and physical abilities to the joys of baseball.

Prior to Universal Baseball, Nakamura, a native of Hokkaidō, worked in the real estate industry. However, his real passion in life has long been supporting disabled sports. Through his involvement in different projects, he came to know Horie Yasushi, the CEO of a Tokyo-based firm specializing in electrical equipment for trains. Horie’s company, Horie Sharyō Densō, actively participates in hiring people with disabilities and promotes sports for the disabled.

Sharing similar views, the two quickly hit it off when they met. Nakamura was moved by Horie’s passionate description of his ideas about supporting disabled persons and decided he wanted on board. In July 2016, at the age of 48, he took a position at Horie’s company supporting persons with disabilities, which meant leaving his wife and daughter behind in Hokkaidō and moving to the Tokyo area.

Nakamura was settling into his new life when in April 2017, a chance encounter provided the spark that led to him developing Universal Baseball. Nakamura says he was attending a recreation class for disabled children when a boy caught his eye. “I was watching a group of children play a game involving rolling a balloon in a beach towel,” he recounts. Like the other participants, the boy, who had cerebral palsy, had limited mobility and was confined to a wheelchair. What Nakamura noticed, though, was that he was dressed in the blue and white uniform of Japanese professional baseball team the Chūnichi Dragons.

Nakamura is a huge baseball fan. He grew up playing the sport and attended a high school that is known as a baseball powerhouse. He fondly recalls spending countless hours training in the hopes of making it to the prestigious high school national championship tournament, memories that continue to fuel his passion for the game.

Striking up a conversation with the boy’s mother, he asked about the uniform. Beaming, she told Nakamura that “he’s crazy about baseball.” Nakamura knew exactly how he felt. Recounting his own childhood spent on the baseball diamond, he promised the boy that they would play a game of baseball together. Just how they would go about this, though, was anyone’s guess.

Nakamura contemplated how best to convey the excitement of playing baseball to a severely disabled child. He knew he had his work cut out for him, but was determined to keep his promise to his young friend. His first idea, using a balloon to play catch, was entertaining, but to Nakamura the lightness of the toy failed to recreate the delight of tossing a ball around the field.

He borrowed from the Paralympic event boccia for his next idea. In the parasport, players whose disabilities make it difficult to grip the balls make their shots using a specially designed ramp. Nakamura thought a similar device could be used to roll a ball into different slots to determine outcomes like hits, outs, and homeruns.

He recalls the first time trying out the ramp idea with the boy and his mother: “They thought it was great. When he got a hit, he and his mom would cheer wildly.” Although popular with his intended target, Nakamura was still not satisfied. “He could get the ball rolling with his fingertip, but someone still had to aim the ramp for him.”

Wracking his brain about what was missing from his approach, it eventually occurred to Nakamura that batting was the key. To convey the essence of baseball, players needed to feel the excitement of taking their turn in the batter’s box.

Using the opening and closing mechanism of one-touch umbrellas as his guide, he developed a button-operated bat. Nakamura felt certain that he had hit upon the answer. But while testing the device, he discovered to his chagrin that disabled children had a hard time pressing the switch. “I tried it with five or six kids, all with the same result,” he says. “It opened my eyes to how little I understood the physical limits of the children.”

Nakamura headed back to the drawing board in disappointment. “I felt awful about failing to deliver after getting everyone’s hopes up,” he says. Although dejected, he insists that he was far from throwing in the towel. Spurred on by the words of appreciation he received, he redoubled his efforts. 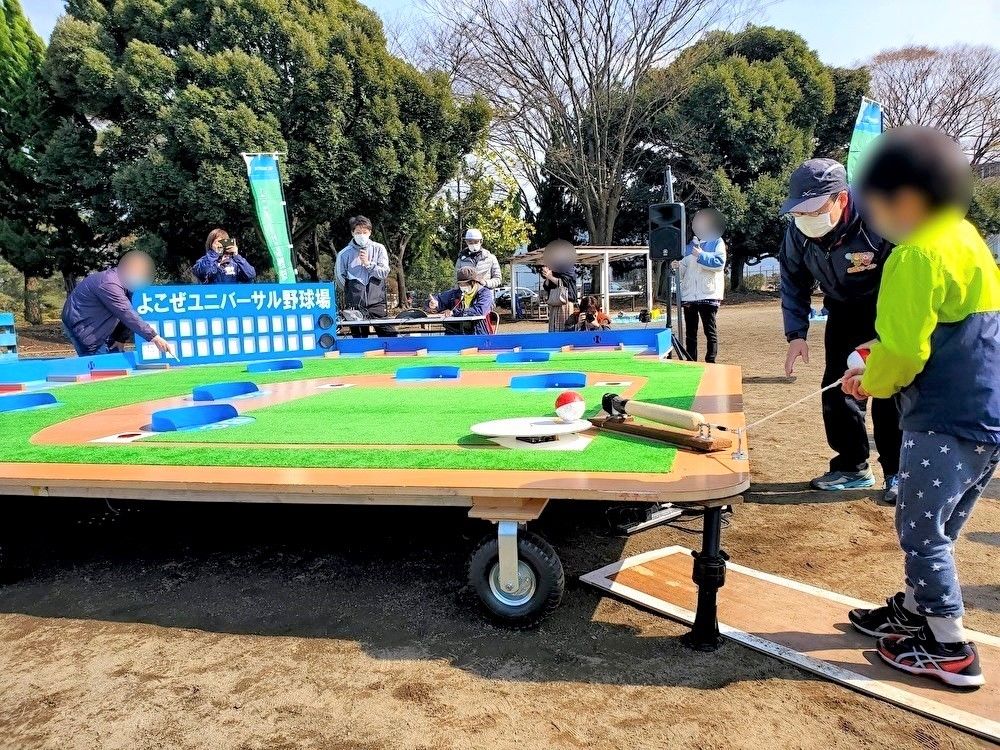 A child intently watches the ball rotate, waiting for the perfect moment to send the bat swinging.

Casting around, he experimented with materials like springs, strings, and elastic bands trying to come up with a batting system that a child with extremely limited mobility could trigger without assistance. After much trial and error, he eventually settled on securing the spring mechanism of the bat with a pin attached to a string, which a batter could easily pull to send the bat into action.

Nakamura presented the apparatus to the boy in the Chūnichi Dragons uniform. With a slight tug of the string, he was able to make the bat swing forward, sending the teed-up ball whizzing across the board and crashing into a stack of wooden blocks Nakamura had set up. The boy’s cries of joy were music to Nakamura’s ears.

Nakamura watched emotionally as other children joined in the fun and took turns at bat. After a while, though, they grew bored as the novelty of knocking over the blocks wore off. “There’s not much fun if the ball goes the same way every time,” admits Nakamura.

In baseball, batters get out more often than they get hits, which is why it has been called a game of failure. It is the low level of success at the plate that makes hits like home runs all the more thrilling for players and spectators alike. Nakamura had created a batting system that children with disabilities could use, but he needed to figure out how to make it more challenging for batters.

He thought about his young friend in the Dragons uniform as he contemplated the problem. Since their first meeting, his promise to play a game of baseball together had gradually consumed more and more of his life, until it was all he thought about. Recreating the same thrill that he had experienced as a young ball player hinged on making batting outcomes unpredictable.

Using his understanding of batting—that outcomes depend on factors like how a batter connects with a moving ball—he decided to place the batting tee on a rotating disc. This forced players to contend with a ball on the go. When a batter let the bat fly, the ball would head in different directions depending on how it was hit. Nakamura built a prototype turntable and hit ball after ball, making minor adjustments to the mechanism until it worked smoothly. 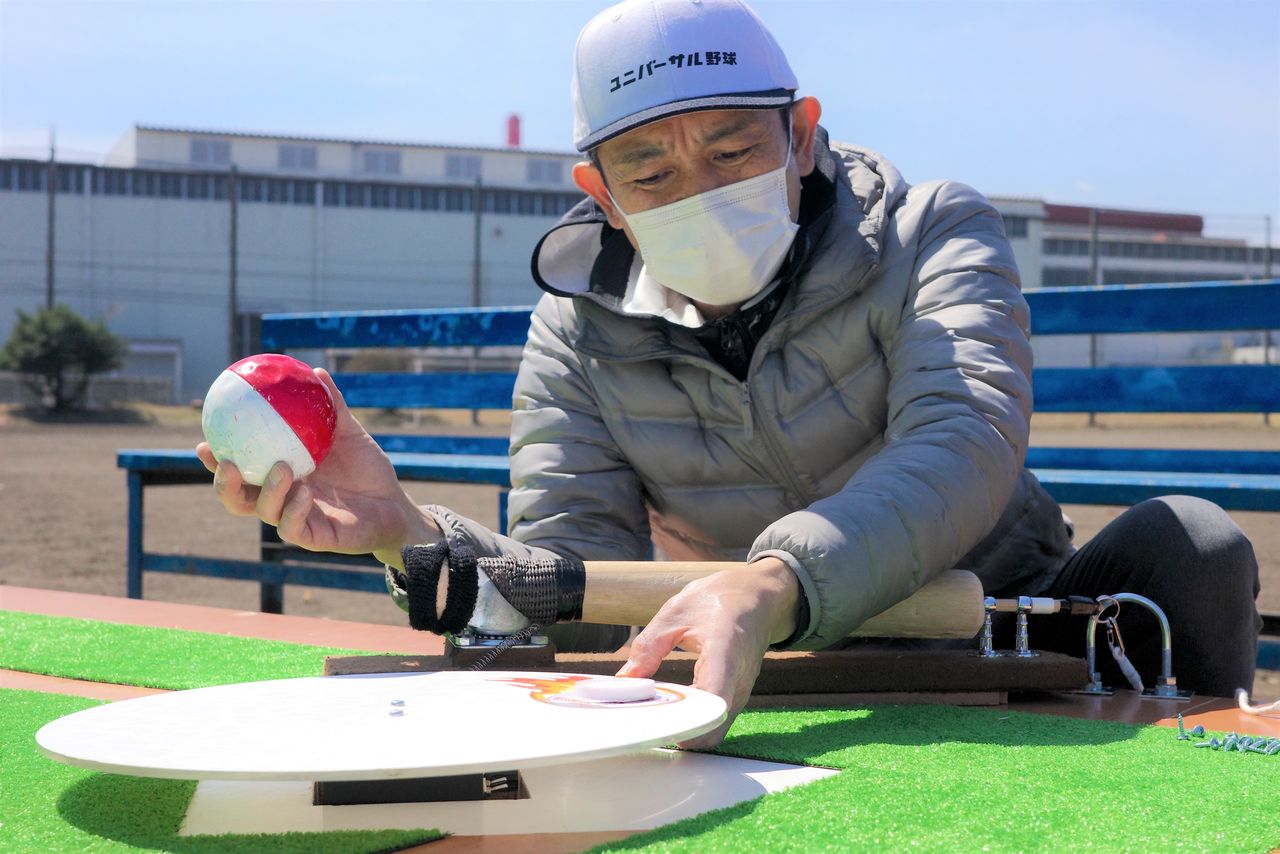 Nakamura adjusts the board’s turntable, the centerpiece of Universal Baseball.

With the batting system completed, Nakamura got to work building the stadium. Around Christmas 2018, he promised the boy in the Dragons uniform and other children that the game would soon be ready to play. True to his word, he debuted Universal Baseball in late March 2019. The game was challenging while still being accessible to children of differing physical abilities. 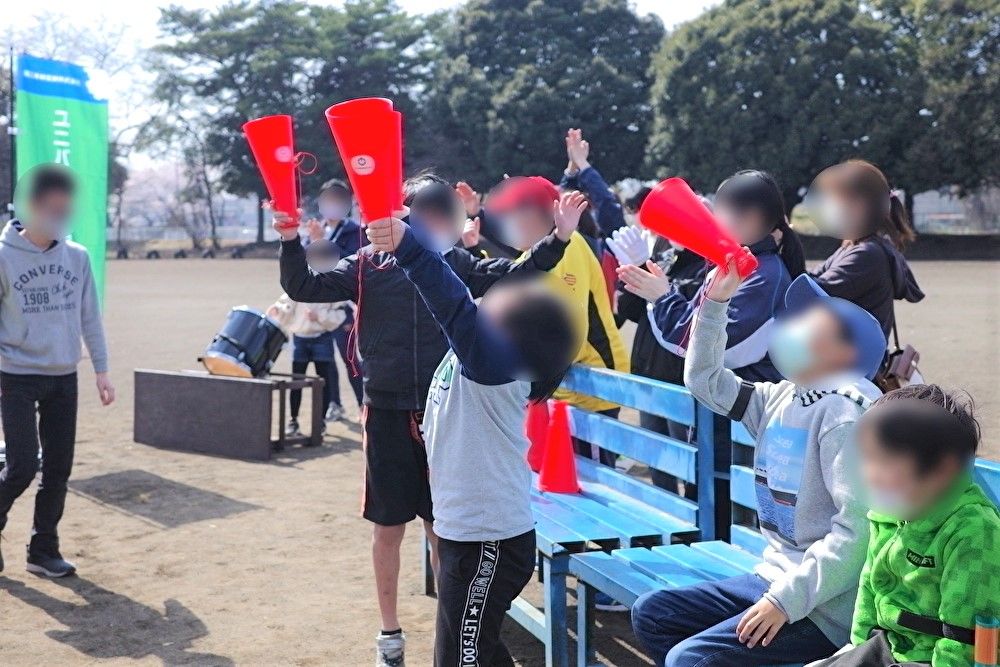 Children cheer the action on the board. Like in standard baseball, hits produce jubilation, and outs disappointment.

The atmosphere of the first game, which pitted a group of disabled children against their families, was an unforgettable occasion. Everyone in attendance cheered as each player took their turn at bat. As Nakamura had hoped, batters struggled to send the ball into one of the hit zones on the board. Disappointment built with each successive failure, but this gradually gave way to elation as players worked out how to time their swings better and began getting hits. The game came down to the wire, thrilling participants on both sides.

Meeting on Even Ground

Nakamura lauds Universal Baseball for leveling the playing field. “There are limited options for disabled children to compete with other members of the family on equal terms,” he says. “But the game gives disabled siblings the chance to go head to head with their able-bodied brothers and sisters. Such interactions provide families new ways to connect and strengthen bonds.”

Shortly after Universal Baseball’s first successful outing, Horie brought it under the umbrella of his company’s business activities, starting in June 2019. Although the start of the COVID-19 pandemic a half year later provided an unexpected curveball for Nakamura, he has gradually expanded his activities with the support of elementary schools, special needs facilities, and other institutions, bringing the game to baseball-loving children around Japan.

Over the last three years, Nakamura has also made adjustments to the board to improve the playing experience. He smoothed out the warps in the ground of the first version of the game that affected the ball’s movement, in addition to making the whole easier to assemble and disassemble. He also weatherproofed the board so that games can go ahead rain or shine. 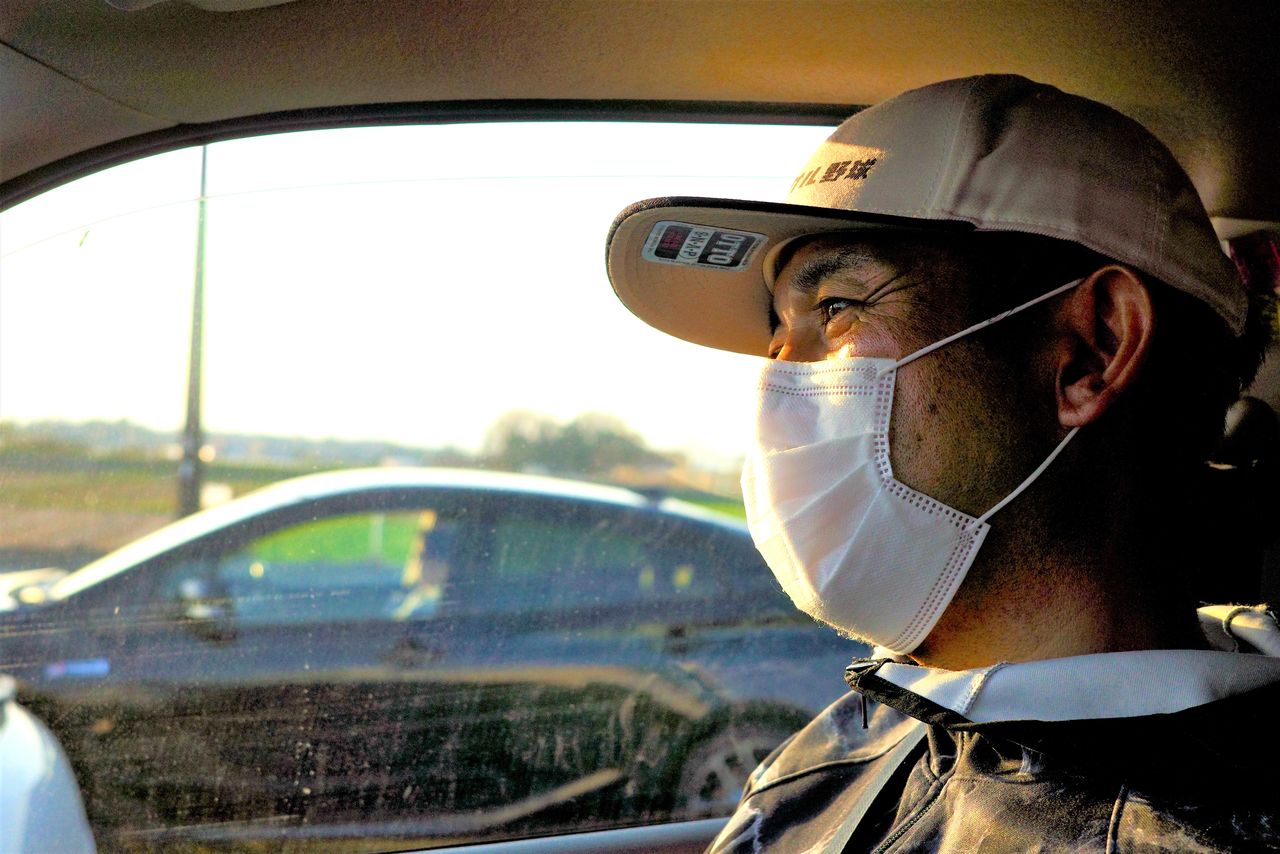 Nakamura at the wheel, on his way to another Universal Baseball event. He transports the game to venues all around Japan.

“What I love about baseball is that you never know how a game will play out,” Nakamura says. “I wanted to recreate that feeling with Universal Baseball while enabling people to compete without regard to their physical abilities.“ He is now focused on expanding the scope of the game. “I want it to catch on overseas. I’m also thinking about how to adapt it so visually impaired children can play.”

The event at the park in Mooka turned into a hitting bonanza, much to the enjoyment of the participants. Following the game, Nakamura carefully packed away the board with his mind already on his next outing. As long as there are young baseball fans in Japan and elsewhere waiting for their chance in the batter’s box, he will be there with Universal Baseball.

(Originally published in Japanese. Banner photo: Children play a game of Universal Baseball at a park in Mooka, Tochigi Prefecture. All photos © Kumazaki Takashi. Some photos have been altered to hide the identity of individuals.)