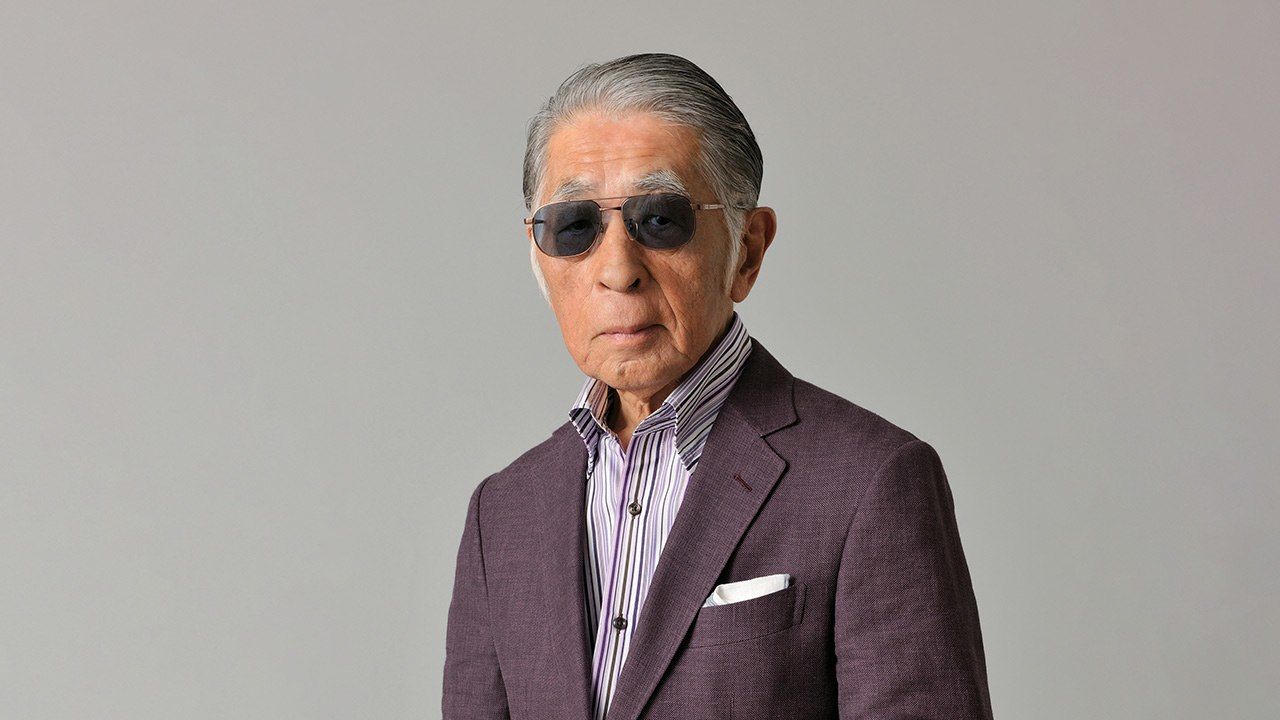 Culture Entertainment Manga Jun 3, 2022
Fujiko A. Fujio, who passed away this year, spent decades working alongside his creative partner Fujiko F. Fujio to produce countless beloved manga works and spin-offs on the big and small screen alike. A look at his career and the art he left behind for fans both young and old.

A Pair of Giants in the Manga World

On April 7, 2022, the celebrated manga artist Fujiko A. Fujio passed away at the age of 88. During a career that spanned decades he gained fame for works like Ninja Hattori-kun (Ninja Hattori) and Kaibutsu-kun (The Monster Kid), along with a host of other creations that showcased his flair for black humor. 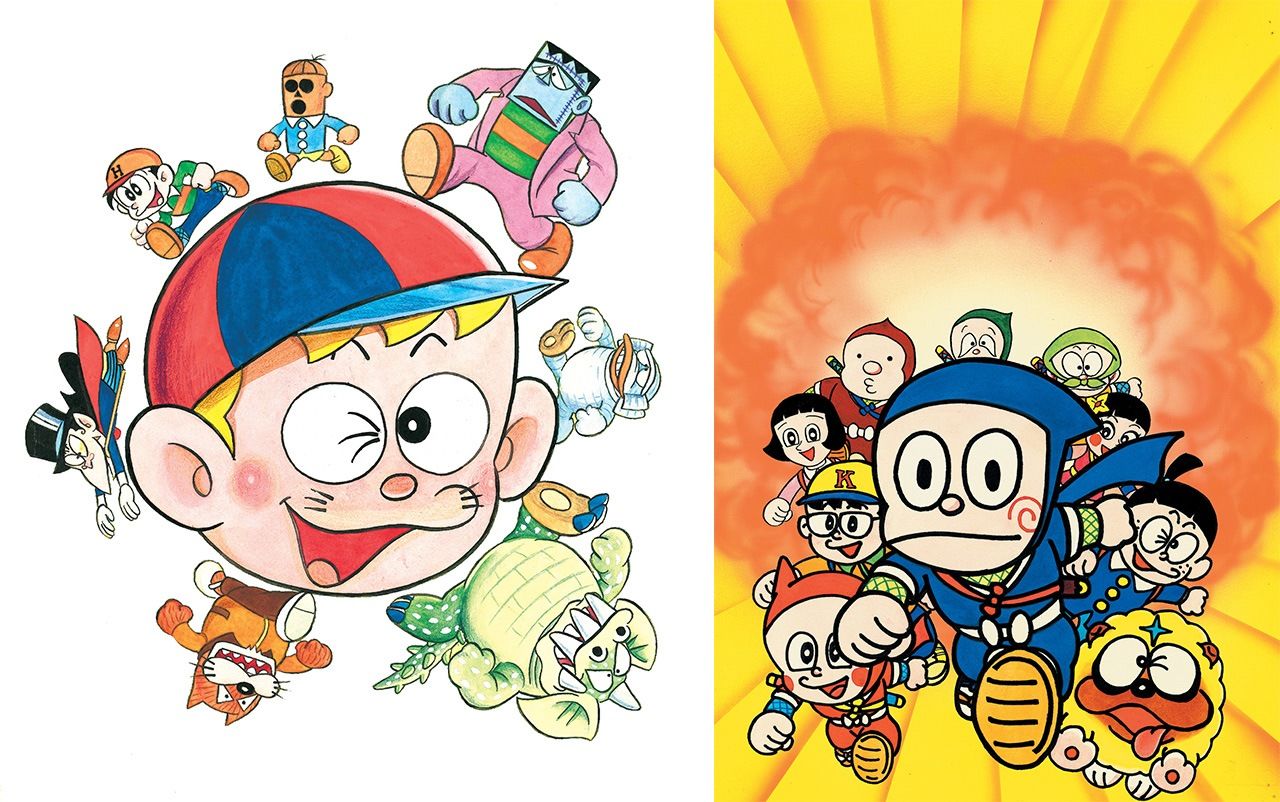 The well-known characters from Kaibutsu-kun (at left) and Ninja Hattori-kun. (© Fujiko Studio)

Born Abiko Motoo in 1934 in Himi, Toyama Prefecture, Fujiko A. Fujio (the “A.” coming from his surname) loved to draw from a young age. In 1951, he joined his elementary school classmate Fujimoto Hiroshi (Fujiko F. Fujio) to cocreate their first work as a manga team, Tenshi no Tama-chan (Tama the Angel), serialized in the Mainichi Shōgakusei Shimbun.

From this precocious start in their teen years, the Fujiko Fujio pair would go on to create countless major manga hits through a career stretching across nearly four decades. While their debut work was released under both of their real names, until they dissolved their partnership in 1987 they used their Fujiko Fujio names, with the exception of a short period early on when some works were released under the name Ashizuka Fujio. 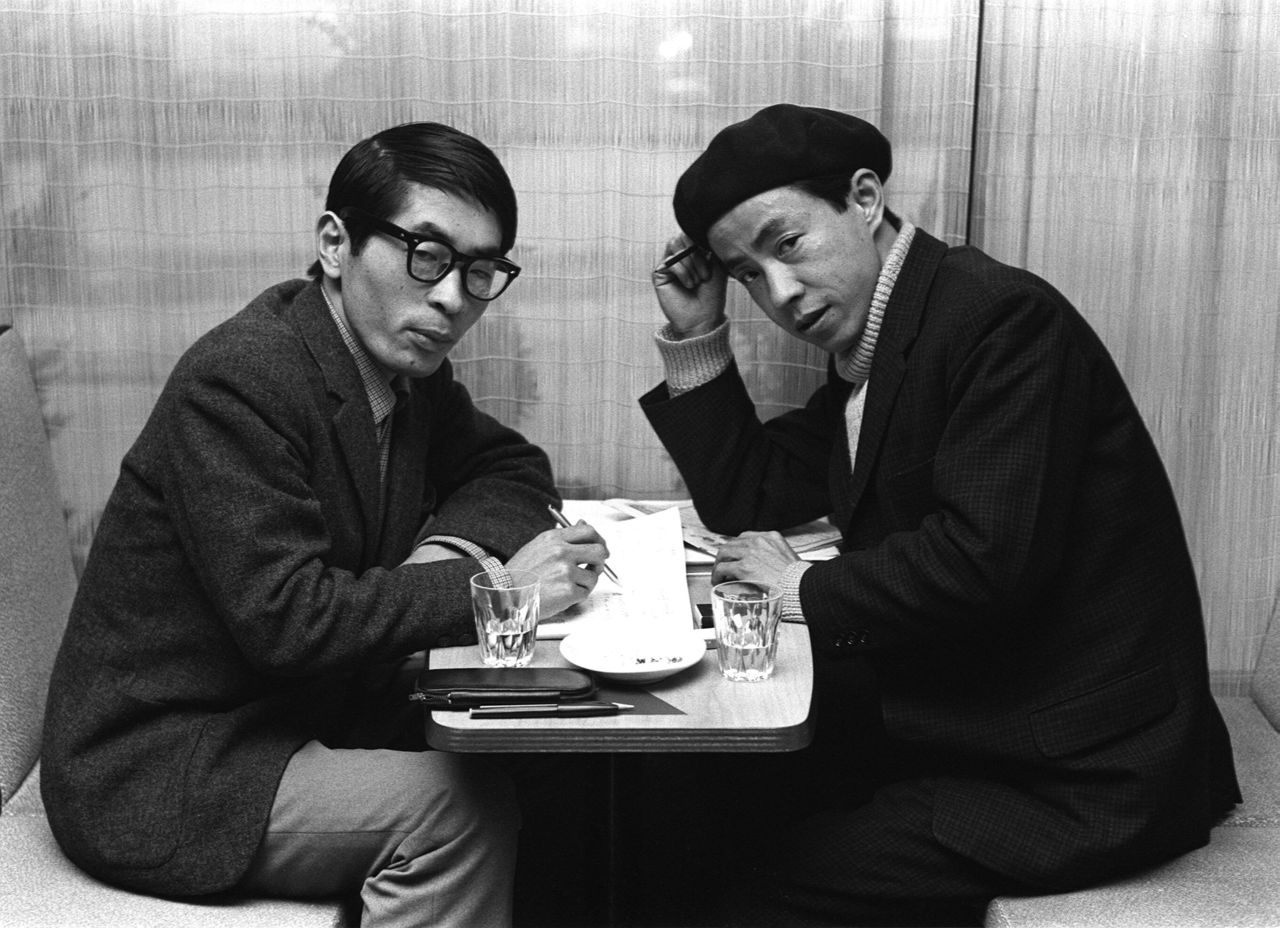 There have been several other famous groups of artists in the manga world working under a single name, such as Yudetamago (the two creators of Kinnikuman) and Clamp (a multiple-member female group who produced works including Cardcaptor Sakura). Most of these units, though, divide the work of manga creation among them, with some members creating the story outlines and others inking them for publication. Both Abiko and Fujimoto were able to create stories and draw them to completion, making them a rare presence indeed in the industry. (Perhaps the only other similar group that comes to mind is Muroyama Mayumi, with one member of that name and her sister Muroyama Mariko, who created works including Asari-chan.)

The Fujiko Fujio pair deserve recognition for the consistency of their drawings. It is one thing for multiple artists to come up with narratives that hold together; when it comes to the images on the page, or on the screen for an animated feature, while there may be multiple drawers producing art early on, there is generally one artistic director in charge of reworking each frame toward the end of the process. This appears to be something Abiko and Fujimoto never needed to resort to, though. Perhaps because they learned from the same examples—they were both known to spend long hours copying pictures by Tezuka Osamu, whom they deeply respected—they showed an ability early in their careers to produce art that could be put together seamlessly in a single work.

As those careers progressed, though, their individuality began to shine through more clearly in both the pictures they drew and the stories they presented. At one point they began to be called “the light Fujiko” and “the dark Fujiko,” with Abiko being the latter, as their artistic paths diverged. In fact, they began creating more works individually as early as the mid-1950s, and the 1964–66 Obake no Q-Tarō was the last series they drew together as “Fujiko Fujio”, although their partnership remained in place until they ended it in 1987 when Fujimoto fell ill. Thereafter, they worked as Fujiko F. Fujio and Fujio A. Fujio.

Fujimoto would go on to massive fame for his children’s works like Doraemon. Abiko, meanwhile, moved steadily into black humor, tales of the weird, and other darker areas in his work.

Befitting the “dark Fujiko,” Abiko’s signature drawing style did make heavy use of black on the page. His images are often characterized by their bold contrasts between white and black, but when one of his frames hits the eye, the overwhelming impression is one of black, rather than the white portions of the design. Compared with his partner Fujimoto, Abiko wields a heavy pen when laying down the bold lines of his primary forms; particularly from the middle period of his career onward, his work somewhat approaches a gekiga “dramatic comics” feel.

Along with Ninja Hattori-kun and Kaibutsu-kun, mentioned above, Fujiko A. Fujio created works including the autobiographical Manga michi (Our Road to Manga), Puro gorufā Saru (Saru the Pro Golfer), Matarō ga kuru! (Matarō Is Coming!), and Warau sērusuman (The Laughing Salesman). As noted above, many of these later creations delve into the darker side of human nature with their dark humor and explorations of the weird. Indeed, it was not only for his heavy use of black ink that Abiko was known as the “dark Fujiko.” Even in his lighter works like Ninja Hattori-kun and Kaibutsu-kun, with their plentiful gags aimed squarely at a younger audience, we might note that the main characters are, after all, a ninja and a monster, figures from the darker side of existence. 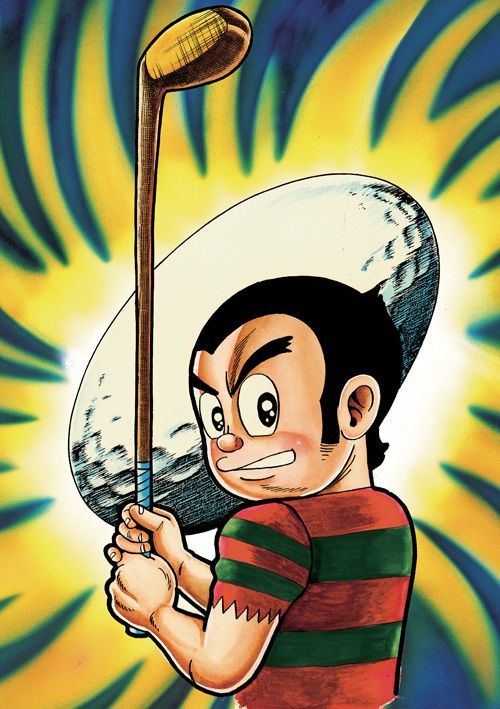 In his later years, Abiko wrote about his love of darker tales in his autobiography 81-sai: Imada manga michi o (Still Walking the Road to Manga at Age 81):

I was always fond of stories with a certain take on the world—the genre that Edogawa Ranpo described as having a “strange flavor,” like books by the British writer Roald Dahl or the American Stanley Ellin. They were filled with odd characters and mysterious incidents. I thought the readers of Japanese manga magazines like Big Comic would enjoy darkly humorous stories like these, and that was the genesis of my Kuroi sērusuman (Black Salesman).

The “black salesman” indicated in the title of this short, tragic (although not without its comic moments) work, who turns a hapless businessman’s life upside down, would of course go on to become the “laughing salesman” of Abiko’s hit Warau sērusuman series. The work appeared in the November 1968 issue of the just-launched Big Comic, becoming an instant success. The latter half of the 1960s saw the appearance of numerous manga publications aimed at the young men’s market, indicating that Abiko’s new creation and the dark takes infusing it were a perfect fit for the more grown-up readership publishers were trying to cultivate at the time. He was quick to exploit this growing niche with still more short-form works in addition to the series he was putting out at the time.

Abiko’s talent in depicting darker, stranger themes gradually made itself evident in works aimed at adolescent readers, not just young adults. This shift would produce a work aimed squarely at these younger readers’ sensibilities, centered on the revenge taken by a target of bullying: Matarō ga kuru!

Cheering On the Underdog

The work’s protagonist is a junior high school student, Urami Matarō. A small, quiet boy, he becomes the target of bullying by those around him. But he has a secret—as a worshiper of the dark lord Satan, he has strange powers, which he wields in extreme retribution using special incantation against those who take their bullying of him too far. Abiko’s work became one of the hit series of the 1970s.

The 1989 Manga chō shinkaron (Manga Evolution) by manga legend Ishinomori Shōtarō quotes Abiko, who lived with Ishinomori and other future stars of the genre at the famed Tokiwa-sō boarding house, on his inspiration for the work:

Why was Matarō such a hit? Well, for my part, I was always on the receiving end of bullying. I was little, and not much good at sports. Nor was I particularly smart, which had me down on myself. . . . In grade school, the bigger kids would take away my books, or whatever, and that got me feeling even lower. I was a tightly wound ball of inferiority complexes. Generally speaking, in the world of children, the bullied are far more numerous than the bullies. I decided it would be worth writing a manga from the viewpoint of those underdogs. This was Matarō.

This underdog perspective was indeed one of Abiko’s strengths as a creator, I believe, and one that resonated with a great many readers.

Take for example the standard story arc in Warau sērusuman, one of Abiko’s first major solo creations. A person dissatisfied in some way with society or his part in it encounters Moguro Fukuzō, the mysterious salesman of the title, who provides him with some item or service that seems for a time to fulfill all his dreams. Eventually, though, things go awry, and the person comes crashing back to harsh reality. 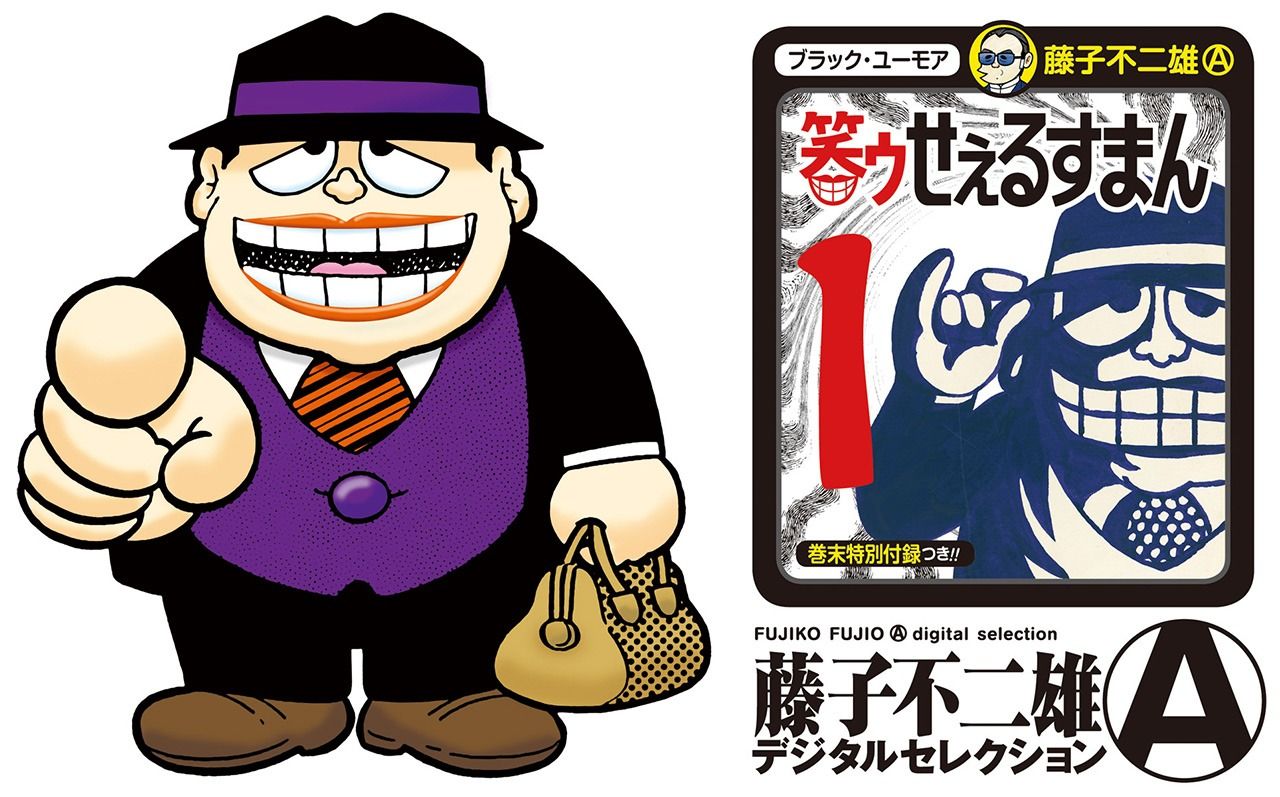 Moguro Fukuzō, the “laughing salesman,” and the cover of the first volume of Warau sērusuman in the Shōgakukan Fujiko A. Fujio Digital Selection series. (© Fujiko Studio)

The overwhelming persona of the Moguro character is, of course, a major factor behind this work’s lasting popularity. Just as important, though, is the way in which people’s greed or ambition—and their acceptance of Moguro’s dangerous aid—takes them to heights of grandeur, from which they are brought low in the end.

At the same time, though, when we consider why the “punishment” meted out to these characters resonates so strongly with readers, we must also recognize that they can also sympathize to an extent with the dissatisfaction and worries the characters feel at the beginning of the stories. Here, too, we can see the underdog perspective rise to the fore of Abiko’s work, bringing a fresh layer of reality to these parables for mature manga fans.

The Strength of Knowing One’s Weakness

In Manga michi, Abiko and Fujimoto write about becoming friends in childhood, developing as artists, and eventually working as professional manga creators. Even in this autobiographical work, Abiko manages to write from the position of the underdog, depicting highly realistic recollections of the unfair bullying and harassment he experienced before his manga debut, both as a student and during a short stint of work as a company employee. Going beyond this, though, is the emotional response he displays to his compatriot Fujimoto.

Indeed, Abiko was well aware that he was not so skilled as Fujimoto when it came to art. His understanding of this, and the chagrin it caused him, comes through in glimpses here and there in his work. We might say, though, that this understanding of his own weakness was in the end one of his greatest strengths as a creator. Comfortable in this truth, he trusted in his friend while doing what he was capable of: pursuing the art he wanted to make, doing his best. The manga coming from an artist like this could not fail to reach the hearts of readers.

When Fujimoto Hiroshi, Fujiko F. Fujio, died in 1996, he left behind a titanic body of work befitting one of Japan’s top mangaka. But the “road to manga” walked by Abiko Motoo, Fujiko A. Fujio, was no less magnificent in the end.