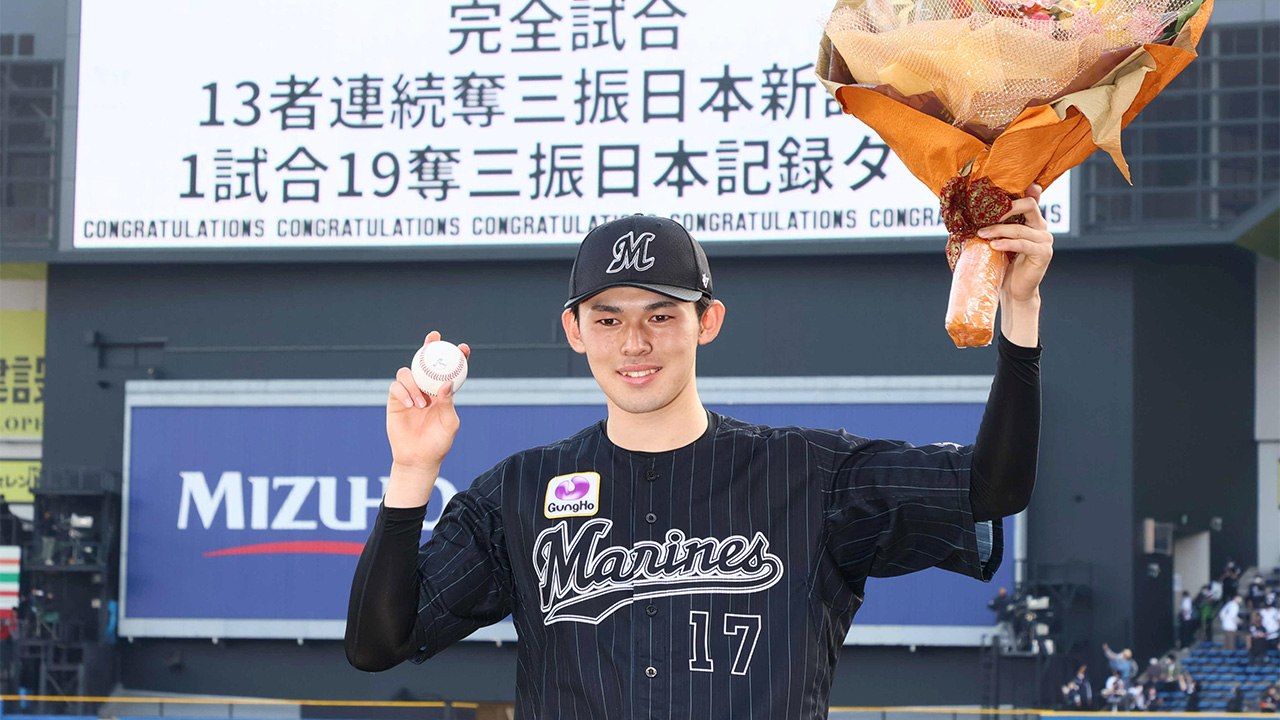 Sports Jun 8, 2022
At just 20 years old, Japanese pitcher Sasaki Rōki is already making his mark on Nippon Professional Baseball. In April he become the youngest player ever to throw a perfect game. His ability to confound batters with his blazing fastball is drawing comparisons with another pitching prodigy and native of Iwate Prefecture, Ohtani Shōhei. Coaches have played a vital part in Sasaki’s development, including bucking Japanese baseball logic by choosing to keep him out of crucial games to save his arm.

Chiba Lotte Marines pitching sensation Sasaki Rōki has set Japanese baseball abuzz. On April 10, he threw a perfect game against the Orix Buffaloes, becoming the youngest Nippon Professional Baseball player, at 20 years old and 5 months, ever to achieve the feat. Using his fastball, which tops out at a blistering 164 kilometers an hour, and equally devastating forkball, he dominated the Orix batters, notching a record-tying 19 strike outs in all and a record 13 in a row—an astonishing achievement considering it was Sasaki’s first complete game as a pro.

In his next appearance against the Hokkaidō Nippon Ham Fighters on April 17, Sasaki continued his dominance on the mound, striking out 14 in eight perfect innings of pitching. He was poised for a historic repeat, but Lotte manager Iguchi Tadahito made the decision to pull him from the game at the end of the eighth as his pitch count had topped 100 pitches. Although Sasaki missed out on potential back-to-back perfect games, the young hurler grabbed the attention of baseball fans at home and abroad in spectacular fashion.

Sasaki first made headlines as a star pitcher for Ōfunato High School in Iwate Prefecture. A native of Rikuzentakata, Sasaki lost his father and two grandparents in the tsunami that devastated the city and other parts of Japan’s northern Pacific coast in March 2011. As he recovered from that experience he honed his pitching skills, earning the moniker “monster of Reiwa” after the current era that began on May 1, 2019. In just a little over two years with Lotte, Sasaki looks ready to turn Japanese baseball on its head.

The young pitcher is still a work in progress, though, as was apparent with an unusual incident in his third start on April 24. Sasaki was having another strong outing, but his reaction to a questionable call drew the ire of home plate umpire Shirai Kazuyuki, who started walking toward the mound, mouthing something at Sasaki. Fortunately, cooler heads prevailed and play soon resumed. Fans of the pitcher subsequently derided Shirai on social media and elsewhere as arrogant, but this does not absolve Sasaki of his part in the encounter. 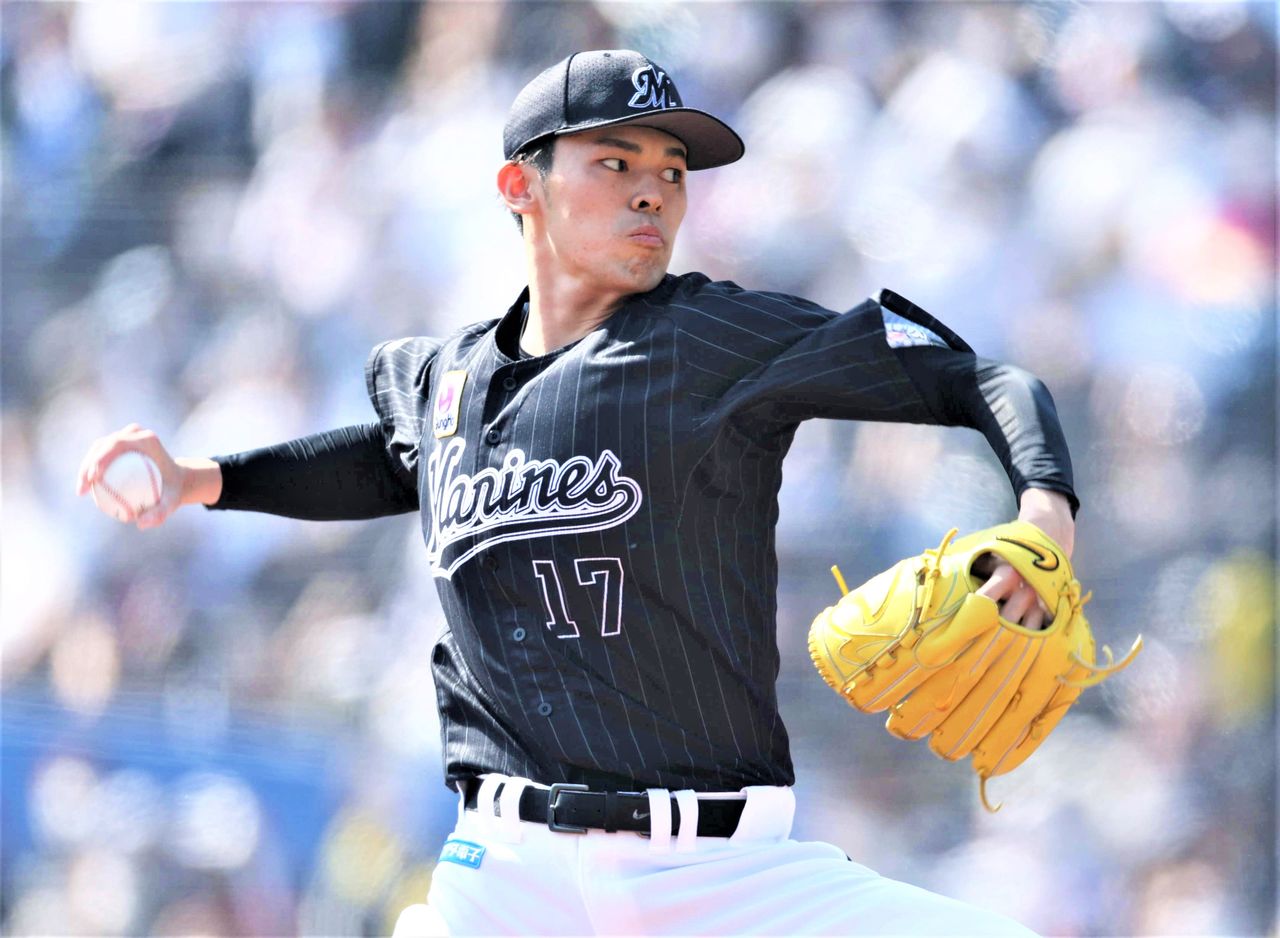 Sasaki Rōki pitching in his perfect game against the Orix Buffaloes at Chiba Zozo Stadium on April 10, 2022. (© Jiji)

Iguchi took Sasaki out of rotation to rest his arm after five starts, three of which were wins. Sasaki, who stands a towering 190 centimeters tall, has been creeping up on the NPB speed record of 166 kilometers an hour set by Yomiuri Giants pitcher Thyago Vieira in 2021, and many see it only as a matter of time until he surpasses the mark. However, Iguchi is not willing to risk a catastrophic injury by pushing his star too soon.

Sasaki joined the pros out of high school. During his student days, his coaches limited how much he trained out of consideration that his body was still growing, and he spent less time in the bullpen than he wanted to prior to making the jump to the big leagues. Lotte drafted him for his ability to throw hard, but from the start coaches have taken a balanced approach in developing the young star. Fans, of course, would like to see Sasaki on the mound more, but they have largely accepted Lotte’s incremental approach as being for the long-term good of his career.

Representative of this shift in attitudes is the reaction to Iguchi pulling Sasaki in the eighth inning, compared to a similar incident from 2007. In the game five of the Japan Series that year, then Chūnichi Dragons manager Ochiai Hiromitsu made the controversial decision to take pitcher Yamai Daisuke off the mound at the end of the eighth inning, foiling his chance at a perfect game. Ochiai was summarily savaged in the press for his decision. In contrast, criticism of Iguchi has been nonexistent.

Baseball in Japan is undergoing a sea change, most notably at the youth level. For generations the focus has been on winning games and breaking records. Although these remain important, the emphasis has shifted toward making the young athletes’ health and wellbeing the top priority.

Sasaki’s coach at Ōfunato High School, Kokubo Yōhei, was a leading proponent of a measured approach to training. The most notable instance of this was when he benched Sasaki ahead of the 2019 Iwate prefectural championship game. Following prevailing baseball logic, Sasaki, in his third and final year with the team, should have started. However, Kokubo, now an administrator at the school, saw things differently. “Judging from his pitch count, how rested he was, and the temperature on the field that day, Sasaki might have been able to take the mound,” Kokubo recounts. “And he would have if I’d told him to. But I wasn’t comfortable risking his arm, even if it looked like it could help us win. That was my decision, and I stuck with it.”

Kokubo’s caution was justified. Sasaki had thrown 194 pitches over 12 innings in a fourth-round matchup, and then 129 pitches in the semifinal just three days later. The final was scheduled for the following day, and a win would send Ōfunato to Kōshien Stadium in Hyōgo Prefecture for the prestigious National High School Baseball Championship. The school had been waiting 35 years to return to Kōshien, but even with so much riding on the game, Kokubo recognized the risk of serious injury by letting Sasaki pitch, declaring that “his condition at the time was the most precarious in his three years on the team.”

Along with pitching, Sasaki also led the offense as the team’s cleanup hitter. Kokubo could have shifted Sasaki to a field position to allow him to continue batting, but he also saw this as a risky move, and instead opted to keep him out of the lineup completely. Stuck on the bench for the final, Sasaki watched the team’s dreams of Kōshien disappear in a 12–2 thrashing by powerhouse Hanamaki Higashi.

Former Chiben Wakayama coach Takashima Hitoshi, who holds the record for most wins in the high school championship tournament with 68, says that Kokubo could have played his cards better. “He put the future of the player first, whereas I would have focused on the game at hand,” proclaims Takashima. “There is no correct answer, of course, but I wonder if the player was onboard with the decision.” In Takashima’s view, it would have been better to use Sasaki sparingly early on in the tournament to ensure that he was in peak condition for the final. 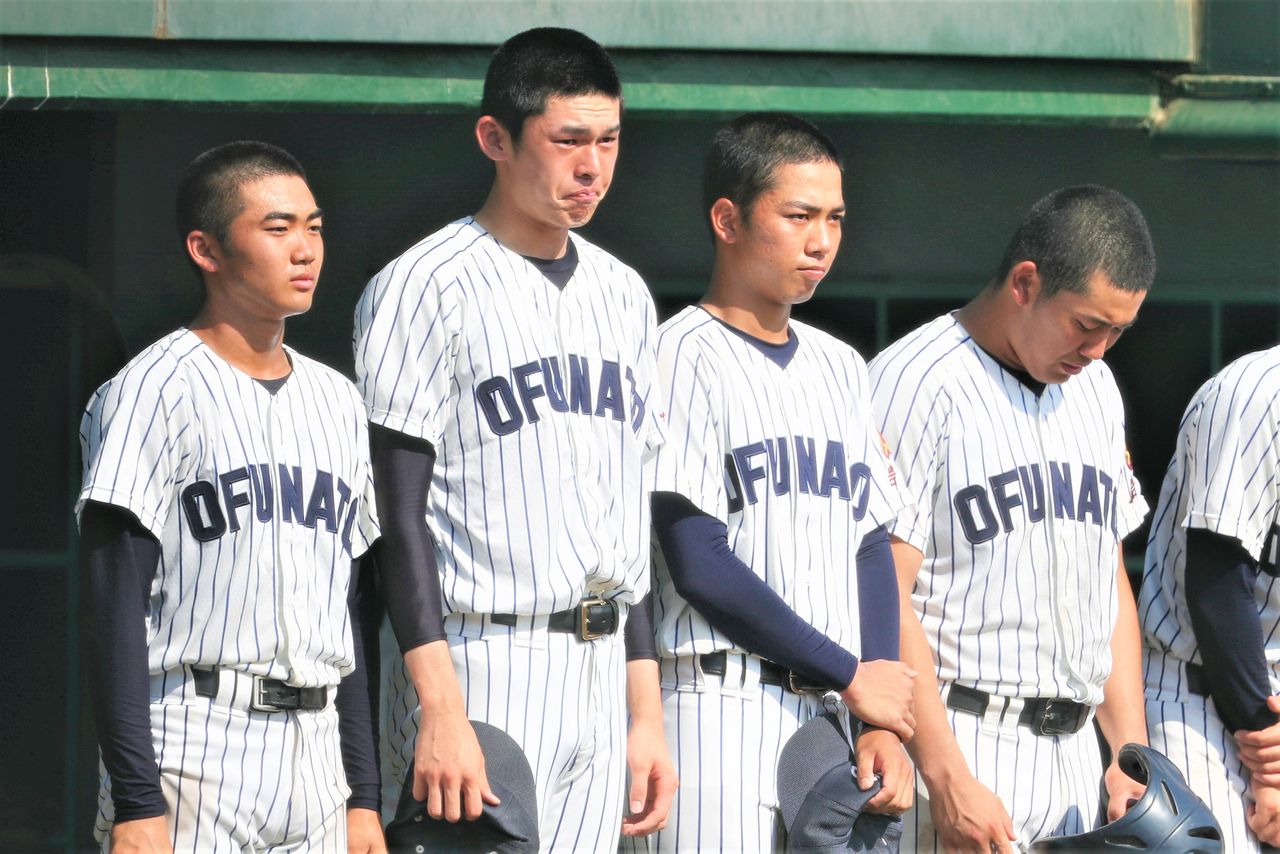 Sasaki, second from left, and his teammates stand teary-eyed outside the dugout following Ōfunato’s loss to Hanamaki Higashi in the finals of the Iwate high school baseball tournament at the prefectural baseball stadium on July 25, 2019. (© Jiji)

To be fair to Okubo, Takashima’s view is that of a manager of a private-school team boasting a deep pool of players. Ōfunato, a prefectural high school, is not so blessed. Like other public schools, it must make the most of the limited talent on its roster.

The summer high school baseball season in Japan is a compact affair. In July, teams compete in prefectural knockout tournaments of six or seven rounds, with the winners heading to Kōshien. The national championships, a six-round, single-elimination tournament, takes place in August over 17 days, including rest days. Players not only have to contend with the tight schedule, but must also cope with the sweltering summer heat. Schools with deep benches have an obvious advantage over smaller teams, who must rely on their best players to carry them through the competition.

Fans want to see their school’s ace in action, and the finals of Kōshien have produced a number of memorable pitching performances. In 1998, Matsuzaka Daisuke, who had pitched in every game up to then, threw a no-hitter to lead Yokohama High School to the championship. The 2006 final saw an epic pitcher’s duel between Tanaka Masahiro of Komazawa University Tomakomai High School and Saitō Yūki of Waseda Jitsugyō High School, where after a 15-inning, 1–1 stalemate, the pair met again in a rematch the following day, with Saitō eventually prevailing.

Against this backdrop, Kokubo, who was still just 32 years old at the time, deciding to bench Sasaki was groundbreaking. He made the call without consulting his star pitcher or other players for fear that their protests might sway his final judgement, a go-it-alone attitude that subsequently earned him heavy criticism. Public opinion was far from one-sided on the issue, though, and many lauded Kokubo for his decisiveness. Looking back, it is clear that the incident heralded a new approach to high school baseball.

Toward a New Era

The 2019 prefectural and national tournaments proved to be a watershed in this shift. That year, all but one of the teams in the competitions rotated their pitching rosters rather than relying solely on their ace hurler. In 2018, the pitcher Yoshida Kōsei made headlines by taking Kanaashi Agricultural High School through the Akita prefectural tourney and all the way into the championship game at Kōshien. But by the following year, players like Yoshida were nowhere to be found.

Then in 2020, a new rule limiting pitchers to 500 pitches in a week was put into effect starting with the spring national high school baseball invitational, also held at Kōshien Stadium. Although the COVID-19 pandemic ultimately forced the cancellation of that year’s tournament, meaning the rule was first observed at the 2021 competition, it normalized the idea of starting reserve pitchers to give ace hurlers a chance to rest their arms.

This year’s spring invitational saw an example of this when Urawa Gakuin High School’s 31-year-old manager Mori Dai benched star pitcher Miyagi Konan ahead of the semifinal game. The southpaw had carried the team from Saitama Prefecture through the tournament up to then. But at a meeting the night of the squad’s quarter-final win, Mori revealed to the other players that he was leaving Miyagi off the roster for the crucial game, which Urawa went on to lose 5–2 in an 11-inning nailbiter.

The incident pulled the curtain on the age of the lone high school baseball ace. Today, managers who push their star pitchers to throw game after game are targets for criticism. Coaches instead garner attention for prioritizing the health of their young pitchers’ shoulders and elbows, and for winning by developing their bullpens.

There is no telling if Sasaki would have injured his arm if he had taken the mound in the fateful Iwate prefectural final. The legacy of Kokubo’s decision is not about what might have happened, but of a manager making a courageous decision and conveying to the public how overworking young, developing pitchers puts their wellbeing at risk.

This has likely influenced Lotte’s own measured approach with Sasaki. In his first year with the club, he trained in the bullpen, but saw no gametime. It was not until May of his second season at the club that he finally made his debut, going on to have 11 appearances on the mound. Now in his third season, he is well on his way to claiming the mantle of ace.

Criticism of Kokubo over Sasaki has gradually faded as his views on the need to minimize the risk to pitchers of serious arm injuries has gained traction. Rather than lamenting what might have been, fans look forward to the monster of Reiwa becoming a baseball treasure capable of great feats on the mound.