New Era Name to Be “Reiwa”

Politics Society Apr 1, 2019
The name for the new imperial era to begin on May 1 this year will be Reiwa, the government announced on April 1.

The new era name, to follow Heisei beginning on May 1, when Crown Prince Naruhito takes the throne, will be Reiwa (令和), announced Chief Cabinet Secretary Suga Yoshihide just before noon on April 1.

The characters in the new name come from the preface to a series of poems in the Man’yōshū, a collection of Japanese poetry compiled in the eighth century. Poets including Yamanoue no Okura, thought to be the author of this text, gathered to admire plum blossoms and recite poems about their beauty. In the opening lines, as translated by Edwin Cranston, “It is now the choice month of early spring; the weather is fine, the wind is soft. The plum blossoms open . . .” the choice month is 令月, providing the first character in the new era name; the wind is soft, 風和, provides the second.

In his statement on the new era name provided after the chief cabinet secretary’s announcement, Prime Minister Abe Shinzō explained the poetic preface as encapsulating “the arrival of spring following winter’s bitter cold, and the spectacle of the plum blossoms in splendid bloom.”

The era names used to date have all had their provenance in Chinese literary classics, making Reiwa the first to come from a domestic source. Prime Minister Abe described the significance of going to the Man’yōshū for inspiration: “This poetry collection, from some 1,200 years ago, contains verse created not just by members of the imperial and other noble families, but also by soldiers and farmers—people from all levels of society. It paints a picture of a broad range of the lives of the people, going beyond social status, and is a symbol of the rich popular culture of Japan.” He also sought to tie the floral verse that provided the new era name to Japan’s future: “We hope to create a Japan brimming with hope, where all people can see their own flowers bloom to the fullest.”

On the morning of April 1, the government convened a meeting of academics and leaders in various fields to gain their views on several candidate names. Input was then sought from the president and vice-president of the House of Councillors and the speaker and vice-speaker of the House of Representatives, after which the cabinet met to deliberate on the choice and make the final decision. 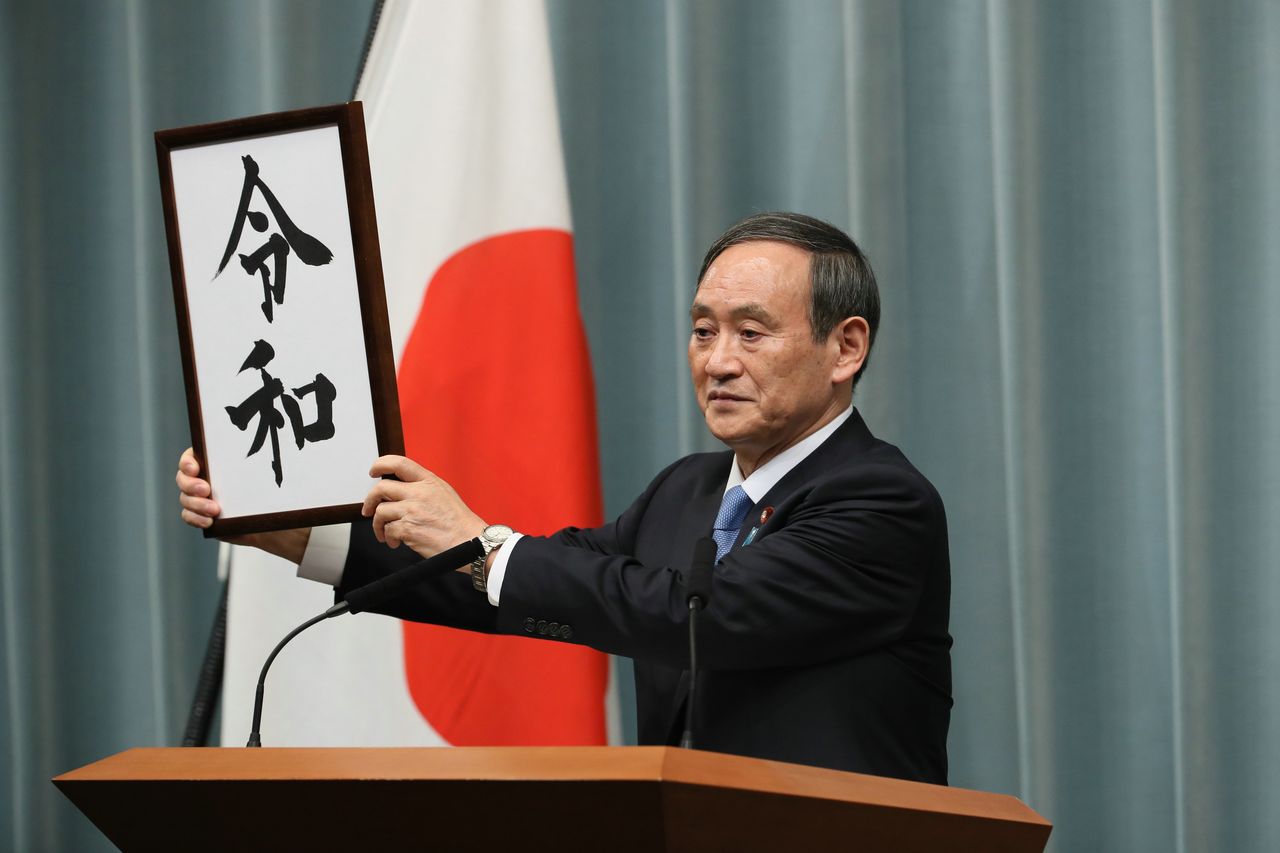 Chief Cabinet Secretary Suga Yoshihide announces the name of the new era, to begin on May 1. (© Jiji)

The new era name was announced to the public after Emperor Akihito, who will abdicate the throne on April 30, was informed of the selection.