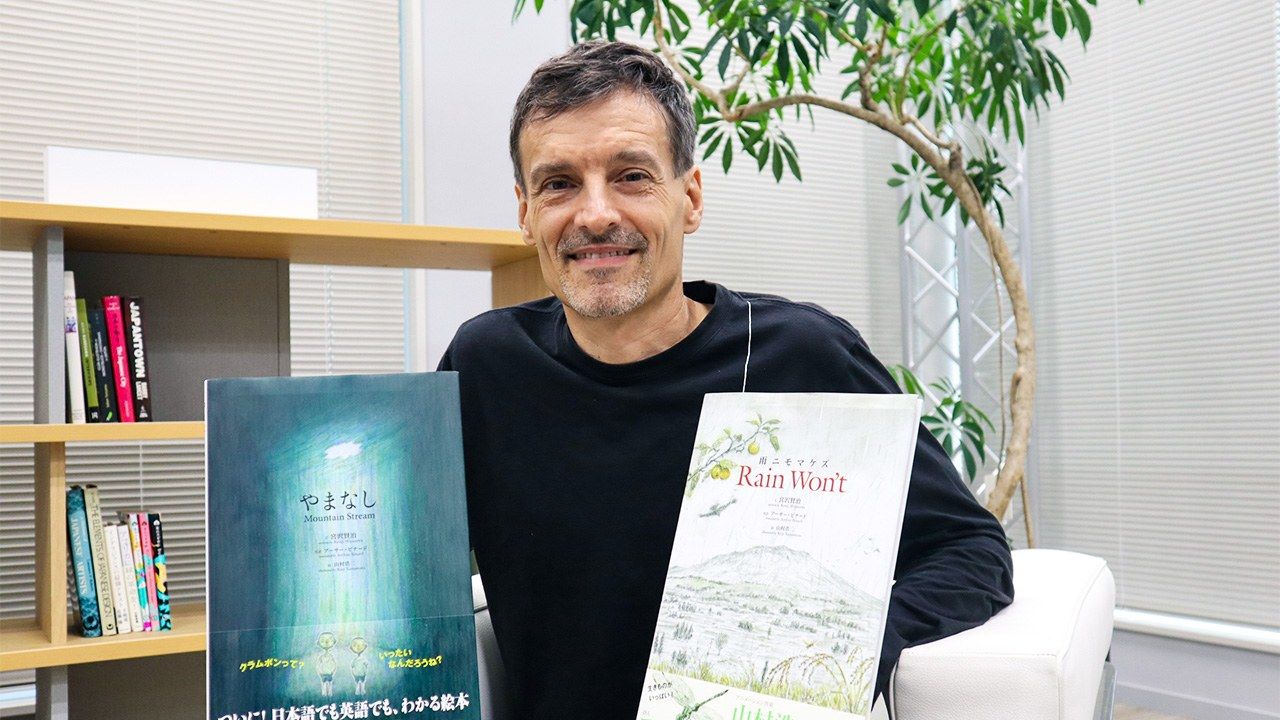 People Culture Arts Language Jul 21, 2022
The American writer Arthur Binard, who has been in Japan for more than three decades, has written award-winning books in Japanese in a range of genres. His latest project is a collaboration with filmmaker and illustrator Yamamura Kōji on Mountain Stream, a picture-book translation of the Miyazawa Kenji story “Yamanashi.” 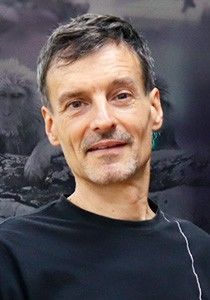 Born in Michigan in 1967. Completed his degree in English literature at Colgate University, New York, before moving to Japan in 1990. Received the Nakahara Chūya Award in 2001 for his poetry collection Tsuriagete wa (published in English as Catch and Release), and the Kodansha Picture Book Award in 2013 for Sagashiteimasu (We’re Lost). Has translated many picture books from English to Japanese and vice versa, including English versions of Miyazawa Kenji’s “Ame ni mo makezu” (Rain Won’t) and “Yamanashi” (Mountain Stream).

Plato and the Crabs

“I was tempted to call this ‘The Allegory of the Crabs.’” Arthur Binard is talking about his English translation of “Yamanashi” by the Japanese writer Miyazawa Kenji (1896–1933). The picture-book version—actually titled Mountain Stream in Binard’s rendering—portrays two crab brothers observing the cycle of life, as a feasting fish is devoured in its turn by a kingfisher. Later, a pear comes bobbing by on the water.

The brief tale found few readers when it was first published in a local newspaper in Iwate Prefecture in 1923. Kenji’s works were little appreciated in his own lifetime, and it was not until decades after his death that he came to be regarded as one of Japan’s most important twentieth-century writers, as a poet and author of children’s stories. “Yamanashi” is now well-known and appears in elementary-school textbooks.

Like many of Kenji’s stories for children, it is not necessarily straightforward, and invites multiple interpretations. In an afterword Binard suggests a clear influence from Plato’s allegory of the cave, pointing out Kenji’s use in his other writings of terms from Platonism—although he notes that until now “no one has ever noticed this connection.” In these terms, the crabs are like Plato’s cave dwellers, who observe only shadows of reality, and the story illustrates “the limits of perception and knowing.” 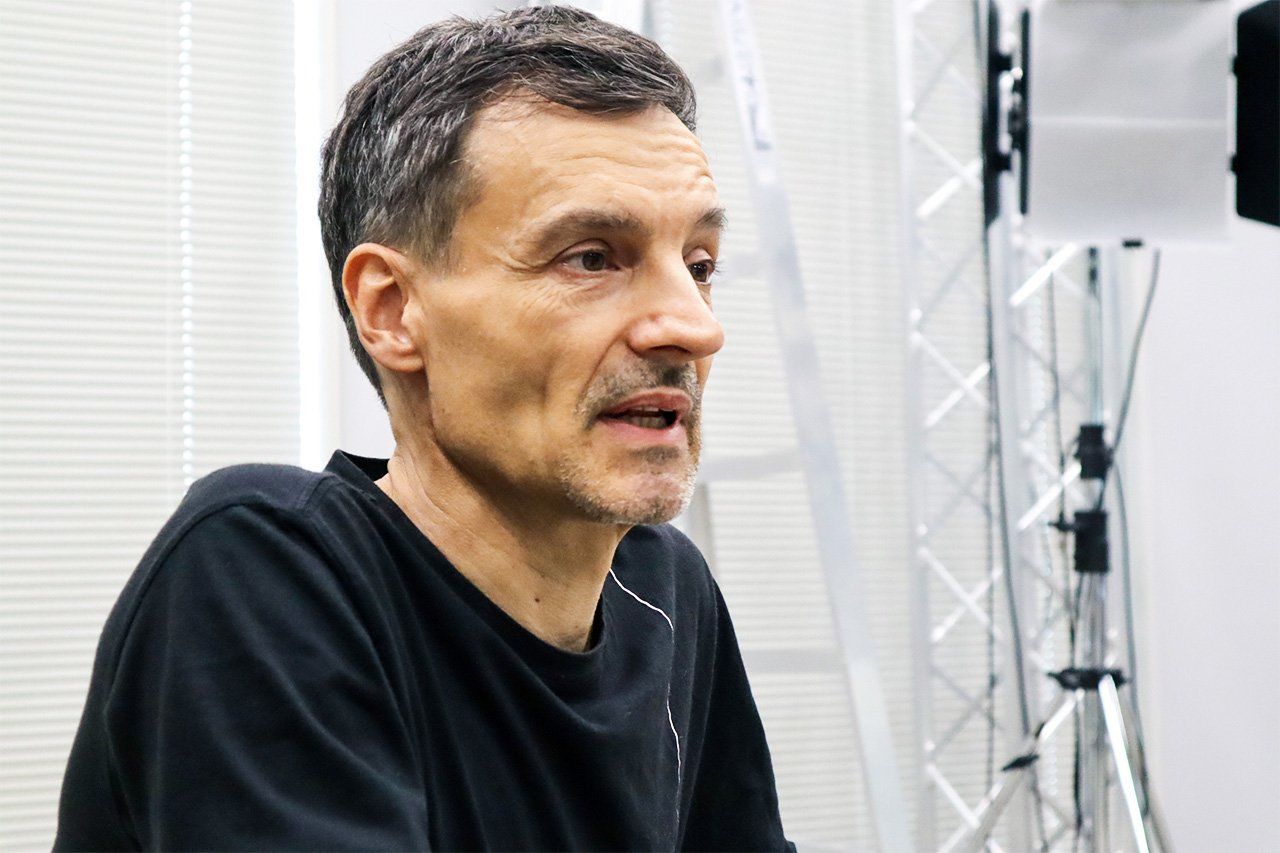 A more pressing question of interpretation, particularly for translators, comes in Kenji’s invention of the word kuramubon for something in the water that is apparently eaten by the fish. He left no explanation behind as to what he meant by these “five buoyant syllables that echo like a snippet of Crablish, or Crabanese,” as Binard describes it. With an imaginative leap, Binard took what seemed from context to be “larval, vulnerable” beings and added a touch of Mother Goose to dub them “Larvy-Doo” in English.

It was a series of leaps that initially brought Binard to Japan in June 1990. He dropped out of an English literature program at Colgate University, New York, to live in Italy for a time before returning to complete his studies on Thomas Nashe and other Elizabethan writers. His curiosity over checking the authenticity of a translation from Italian said to be by Nashe led him to read around the subject.

He happened upon a thesis on Ezra Pound, which talked about Japanese, and the description of the language fired his imagination. “Japanese has three alphabets and they mix them. These people are insane,” Binard recalled thinking at the time. He talked his way into sitting in on a Japanese class, and became so fascinated that he flew to the country as soon as he graduated.

In the decades since, Binard has mastered Japanese to the point that he has won prizes for poetry, essays, and picture books in his second language; he writes frequently in English too. He has produced many picture books in translation, more often than not from English into Japanese, including classics by Eric Carle and Maurice Sendak. Mountain Stream is his second picture-book translation of a Kenji work after his rendering of the poem “Ame ni mo makezu” as Rain Won’t.

Both of the Miyazawa Kenji picture books are collaborations with Yamamura Kōji, best known as an animator of short films, who supplies the illustrations. “I’ve worked with a lot of painters and illustrators, but nobody will go as far as Yamamura to get it right,” Binard says. The two men’s drive for perfection led to countless discussions on how to depict the story of Mountain Stream and break the text between pages; it took eight years to complete. 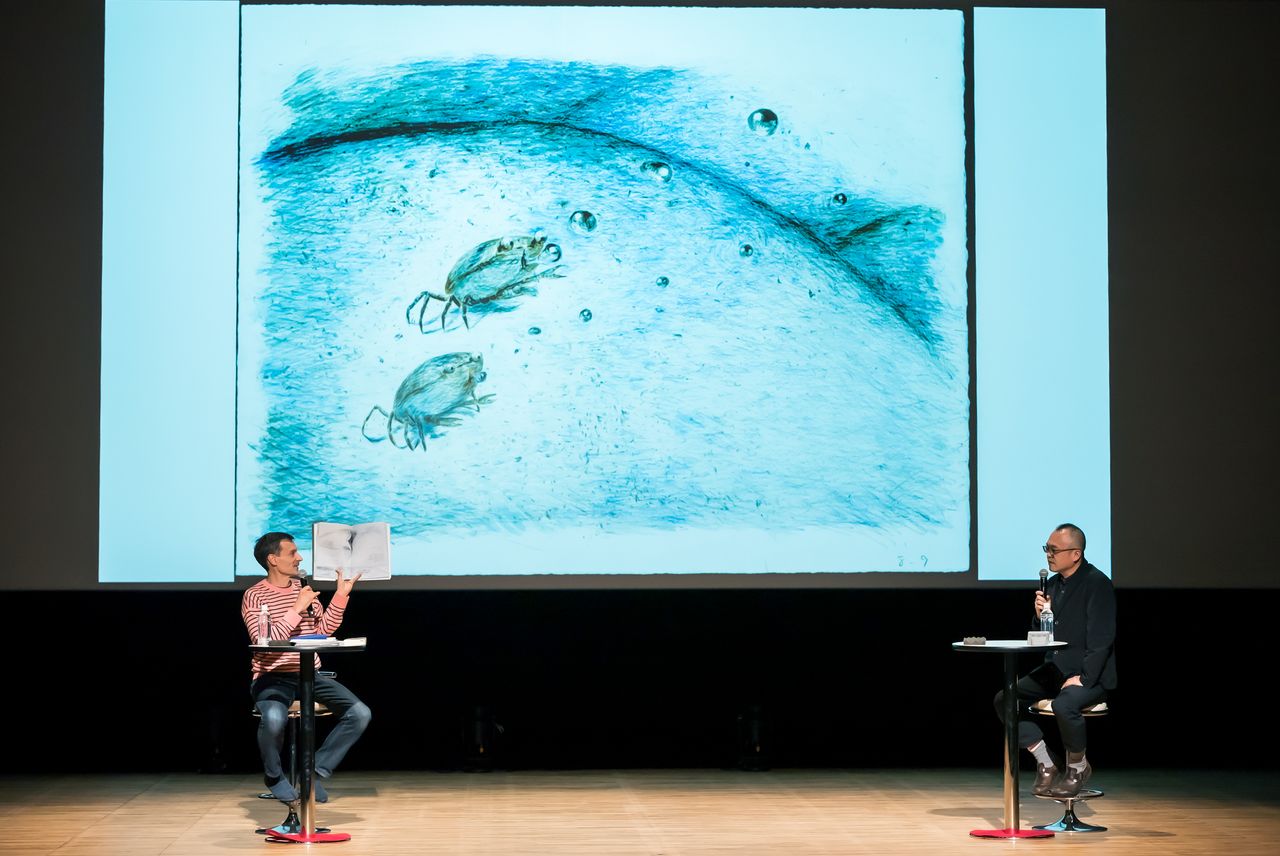 Arthur Binard (left) and Yamamura Kōji at a reading event held as part of the leadup to the Hiroshima Animation Season 2022 (August 17–21). (Courtesy Hiroshima Festival 2022)

One compelling visual interpretation comes in the Magic Lantern Show, a brief framing device in the original story, which Binard notes is sometimes cut out by translators as equivalent to a mere stage direction. In Yamamura’s illustration, two young boys, with a startling resemblance to the crab brothers, watch the show, as provided by a pre-cinema projector. The picture invites us to see ourselves, the readers, within the story.

Writing with a Map

Binard’s admiration for Kenji is plain. “He’s self-built. He creates his literature from scratch, from the soil, from the water. He finds his own seeds and he raises them. He’s deeply rooted in the place where he grew up in Iwate, but he’s so deeply rooted that everything he writes is universal. He writes in Japanese, because that’s the language where he’s rooted, but he makes up all the words.” 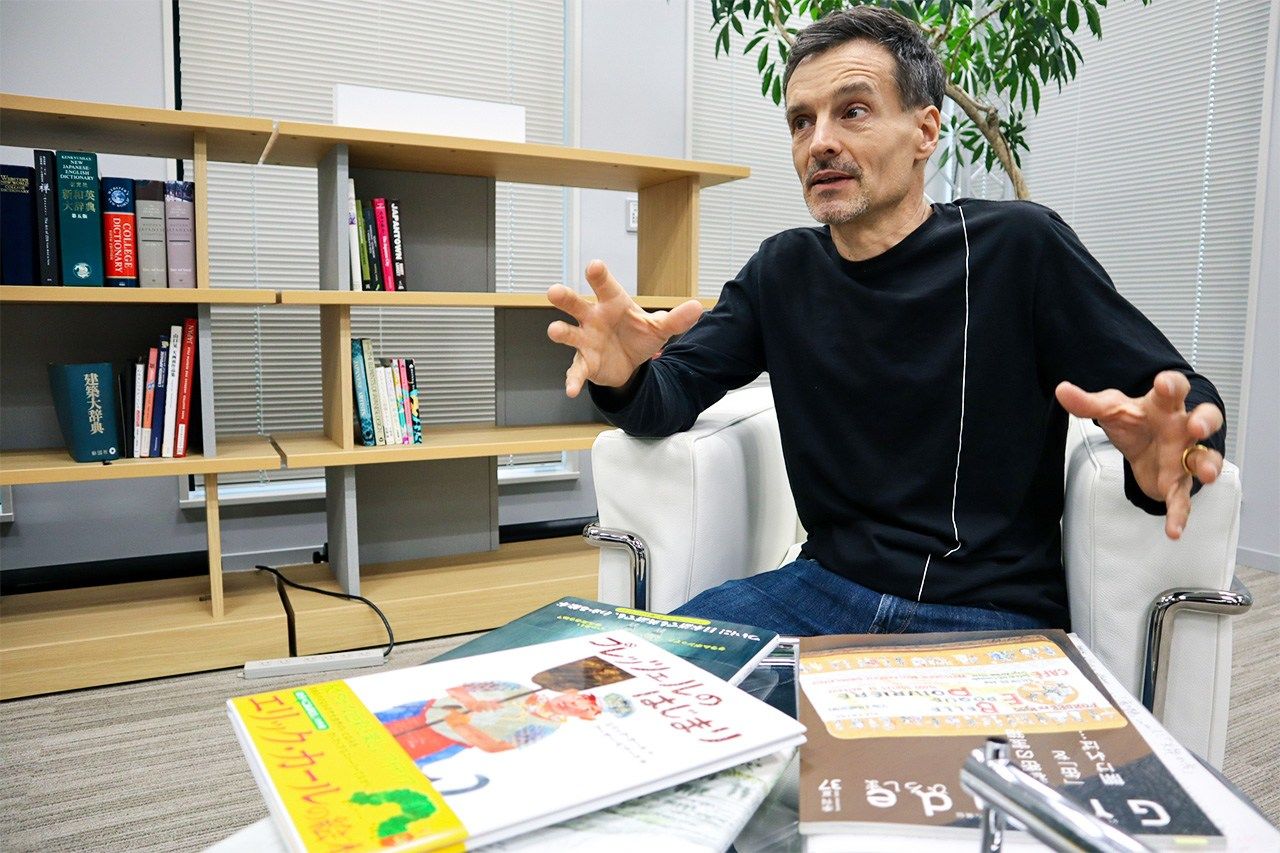 This does not mean that Binard is timorous in translation, however. Even with the title “Yamanashi,” which has been previously translated as “Wild Pear,” Binard feels that a focus on this late blessing in the story—the fruit that plunges into the water—is unsatisfactory. As yama literally means “mountain,” he cites associations with ecology and divinity in this most important of Japanese words, so that its overpowering, all-encompassing qualities justify the broader perspective of Mountain Stream.

As Binard sees it, there is little difference in terms of the work required for the original writer and the translator. “Basically, you’re going on a journey. If you’re a translator, you have a map, and if you’re creating something original, you make your own map.” Nonetheless, he does not regard this as indicating a major reduction in labor. “Either way, you can’t trust these maps. Even if it’s a good map, it’s going to be wrong.”

He also compares translation to transplanting a tree across the ocean. “Say you’ve got a really beautiful ginkgo tree here in Kamakura, and you think, ‘Let’s take this to California.’ It’s going to be really hard to make that tree have the same vitality.” Because the work being translated has the inherent strength of being rooted in its own language, he says, the translator must aim to be better than the original. “Poems and tales become weaker in translation because you lose some of the roots.”

Binard and Yamamura are set to continue with Kenji collaborations. One candidate for their next project is “Chūmon no ōi ryōriten” (often given the English title “The Restaurant of Many Orders”), one of Kenji’s most famous stories, about two foolish hunters visiting a sinister restaurant. As the series continues, it could help introduce the writer to more readers outside Japan.

Despite his central position in Japan’s literary canon today, Miyazawa Kenji is still not that well known in the English-speaking world. But as Binard points out, it took a long time for his reputation to rise in his home country. “He never saw that. It happened after he died, after the war. It really happened after I came to Japan. It’s been maybe thirty years or forty years.” Binard also comments, “It’s natural that people in America or in England don’t know him. But someday they will. There’s work to do. We just haven’t gotten there yet.”