Culture Aug 3, 2017
Animator Yamamura Kōji has won a reputation through works including the surreal Atamayama (Mount Head). In this interview he discusses the particular fascination of short-form animation, which he sees as entirely different from feature films in its independent spirit. 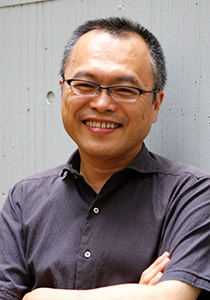 Born in 1964. Graduated from Tokyo Zōkei University. Created children’s anime in the 1990s, including Karo to Piyobuputo (Karo & Piyobupt), Pakushi (Pacusi), and Baberu no hon (Bavel’s Book). His 2002 work Atamayama (Mount Head) won six major awards at international festivals and was nominated for the Academy Award for Best Animated Short Film. With Atamayama (Mount Head) and his 2007 work Kafuka: Inaka isha (Franz Kafka’s A Country Doctor), he became the first person to win top prizes at all of the big four animation festivals: Annecy, Zagreb, Hiroshima, and Ottawa. In 2013, he opened the animation store and gallery Au Praxinoscope in Setagaya, Tokyo. He also teaches young animators as a professor at Tokyo University of the Arts.
Web: http://www.yamamura-animation.jp/e-news.html 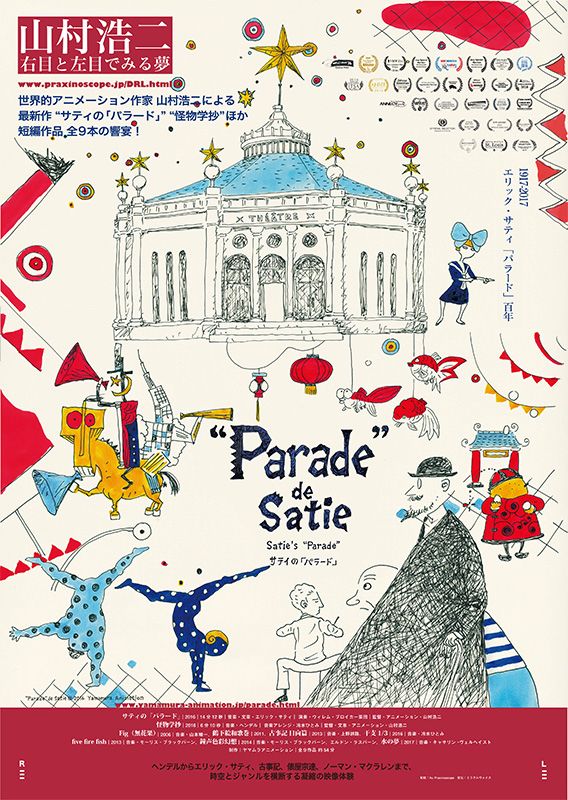 A miserly man finds some cherries, picks them up and eats them. Hating to waste the pits, he swallows them too. Later, a sprout emerges from the top of his head, popping back up no matter how many times he trims it. Eventually, it grows into a splendid cherry tree. When it blossoms in the spring, crowds gather on the man’s head to party under its branches. From there, this classic rakugo tale Atamayama (Mount Head) moves toward its absurd conclusion. Animator Yamamura Kōji adapted the surreal story into a 10-minute animation, which became the first Japanese winner of the Cristal d’Annecy prize at the Annecy International Animated Film Festival in 2002. Since then, he has continued to blaze a trail with a diverse selection of animation shorts. In August 2017, nine of his films, including new works, will appear in a Tokyo cinema in a selection entitled Yamamura Kōji: Migi me to hidari me de miru yume (Yamamura Kōji: Dreams Seen with the Right Eye and Left Eye).

A Test Site for Animators

In 2017, Japanese animation celebrates its centenary. Feature films by animators like Miyazaki Hayao enjoy worldwide popularity and anime has become a standard English word for Japanese-style commercial animation. Yamamura views short-form animation as a separate category from “anime,” however, with a spirit of independent experimentalism similar to that found in the discipline 100 years ago.

“Short-form is like a test site for animators,” he says. “We use all kinds of materials—watercolors, pastels, water-based or Japanese ink, clay, glass, or sand—startling audiences who do not expect to see these applied to animation. The same person might use different tools for different films. This range of expression is what makes shorts so fascinating.”

A Path to Animation

While in elementary school, Yamamura regularly watched the anime Mōretsu Atarō based on the manga by Akatsuka Fujio. It featured a character called Nyarome, a stray cat that walked on its hind legs. One day, Yamamura wondered how the static image of Nyarome he saw on cards for menko—a children’s game played by slapping one’s card down to flip over an opponent’s, thereby winning it—was able to move when it appeared on television.

This was when he first started learning about animation. “Once I knew that animation was based on creating movement by putting together a series of still pictures, I made my own stop-motion eight-millimeter film through trial and error. This took me from junior high to my high school days. The delightful surprise of projecting and watching that footage for the first time still drives me to make short films today.” 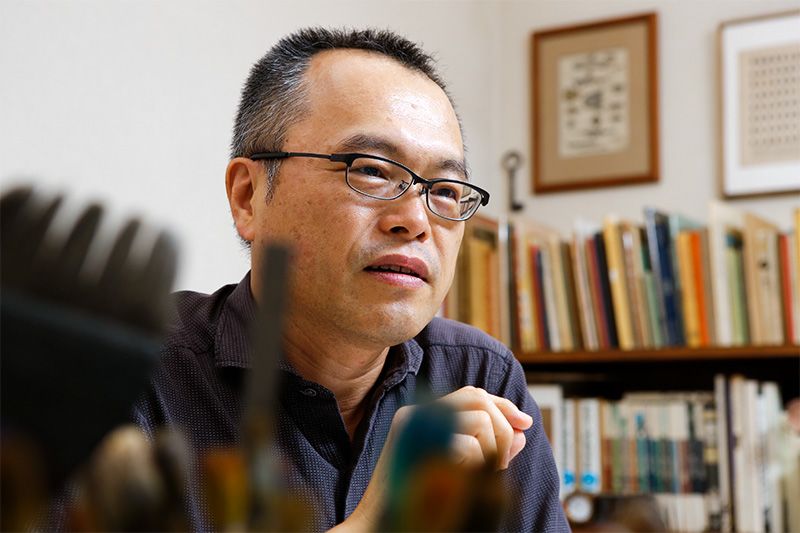 He specialized in representational oil painting at Tokyo Zōkei University, but found that he was more suited to animation. “While I was studying artistic expression, I realized that I appreciated animation for the interest of its changing pictures, and how it is able to depict physically a whole host of emotions like anger, joy, fear, and desire, which individual pictures can’t.”

Influenced by the Russian animator Yuriy Norshteyn and the Canadian Norman McLaren, among others, he resolved on his chosen path. He wanted to produce animations that adults could enjoy, and the inaugural Hiroshima International Animation Festival, which he attended in 1985, spurred him on greatly. “Ishu Patel, an Indian animator based in Canada, was a featured director. While each of his films had a different theme and applied different techniques, I was deeply impressed by their fundamental aesthetic sense.”

His graduation project was a short clay painting animation called Suisei (Aquatic). On leaving university, he worked for two years at a company specializing in background art for anime works before going freelance. 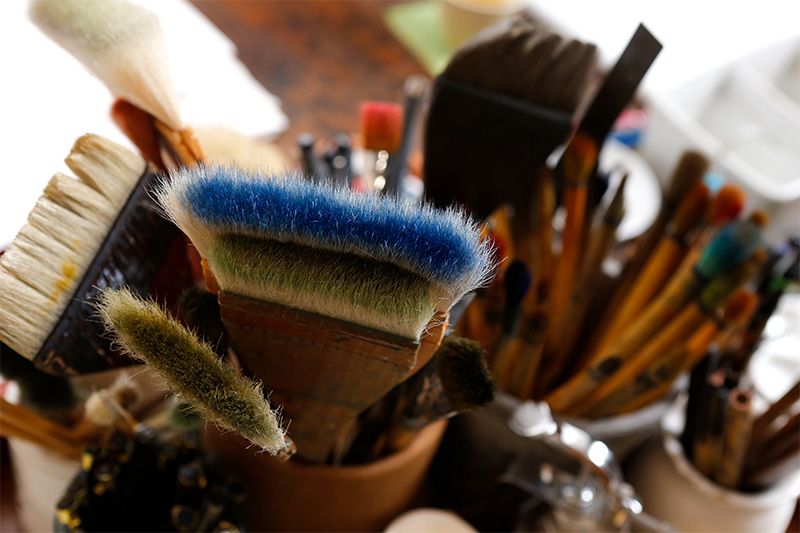 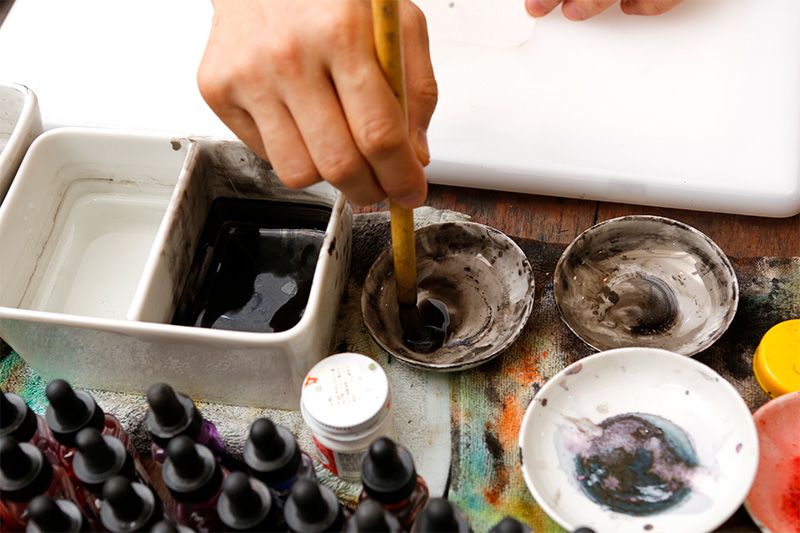 Yamamura draws directly on paper with different kinds of ink. 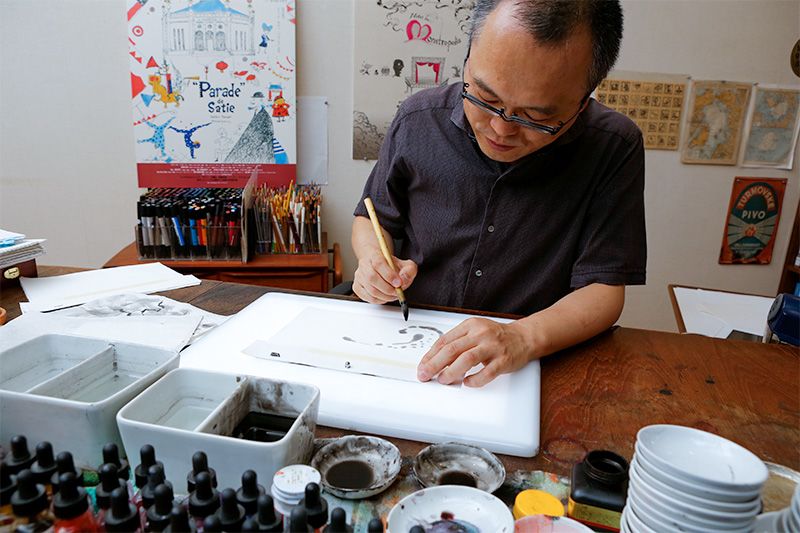 Working on the four-part film Mizu no yume (Water Dream). The first part is included in his summer 2017 selection. 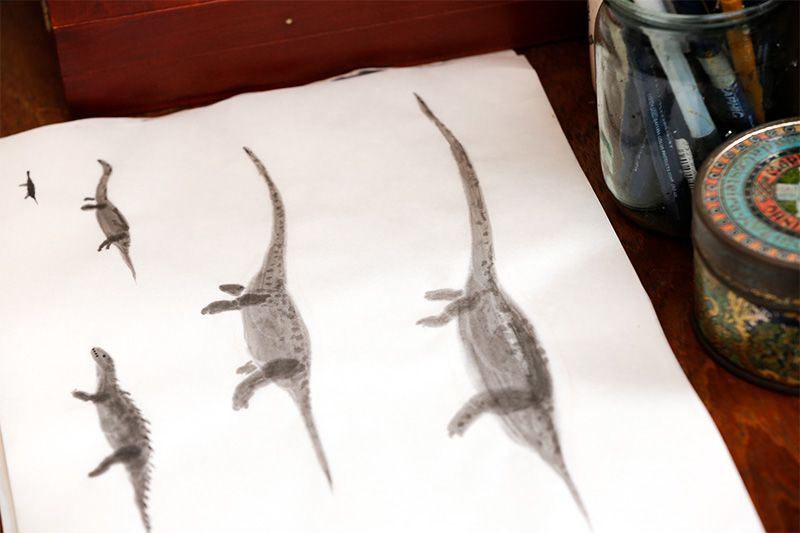 Pictures for Water Dream show the evolution of aquatic life-forms.

“After I went independent, I didn’t get the chance to make works for adults for a while. Commissions from NHK and others came in for children’s animations, but I wasn’t so happy with this at first because that wasn’t exactly what I had in mind. I’d wanted to make films that adults could appreciate using their knowledge and imagination. But while I was making kids’ films, I noticed that the children enjoyed or were scared more by the movements of the characters and the general atmosphere than by the story itself. I was drawing out their hidden fears and curiosity. In this sense, I was expressing myself through animation in the way I’d hoped, even if it was aimed at kids.”

As an experiment, in a five-minute children’s film called Baberu no hon (Bavel’s Book) (1996), Yamamura decided to create a world that was frightening rather than cute. As he only had one month to complete the work, he was not entirely satisfied with the result. The following year he began to work on Mount Head. Alongside other projects, it took him six years to complete.

Yamamura drew the pictures for Mount Head with pencils, pens, and color markers. Among various supplementary techniques, one particular effect was achieved using the bubbles from glass cleaner. “I captured the bubbles bursting by scanning them. This gave the feeling of old-fashioned film.” He used the same method in his longest film to date, Kafuka: Inaka isha (Franz Kafka: A Country Doctor) (2007), which clocks in at 21 minutes. “I did it so much, I ended up breaking a scanner,” he comments with a rueful grin.

Global animation is increasingly digital, and three-dimensional CG in particular is experiencing its heyday. “I think digital film and animation are a good match. The invention of cels in 1914 was an important stage in the history of animation. But their technical limitations narrowed down the possibilities for the art. You could only use acrylic paint with cels and it was impossible to add shading. With digital, it’s easy to compose your pictures at a later stage, whatever paper you draw on and whatever tools you use. It seems like we’ve gone back to where animation began.”

Yamamura basically draws on paper first before scanning his work to upload to the computer. In his recent films, he has shown a growing tendency toward two dimensions.

“Digital art is becoming standard worldwide. But if everyone uses the same apps, there’ll be more works with a similar kind of feel. The key is to skillfully combine digital technology with existing techniques. If you’re satisfied with just one easy-to-use digital tool, you can end up closing down possibilities instead of opening them up.” 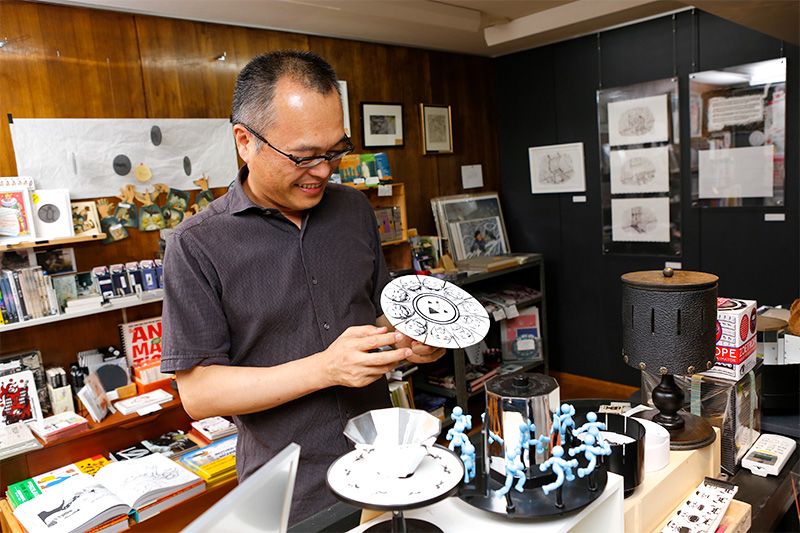 In Yamamura’s studio basement is Au Praxinoscope, a specialist store and gallery. It takes its name from an animation toy patented in 1877.

Among the nine works to appear in this summer’s cinema selection is Sati no “Parādo” (Satie’s Parade), a 14-minute film created in 2016. Last year marked 150 years since the birth of the French composer Erik Satie. Yamamura’s film, taking Satie’s ballet Parade as its subject, has already been shown at several international film festivals.

“I hadn’t planned to coincide with the anniversary as I’d actually wanted to create the film from about 10 years earlier. It’s inspired by Satie’s music. In particular, Dutch jazz musician Willem Breuker’s arrangement and performance of Satie is exceptional, and it made me want to produce footage to accompany it.”

The ballet, first staged in 1917, had a stellar artistic team. Satie provided the music, Jean Cocteau penned the script, and Pablo Picasso designed the costumes and sets. It was composed for the Ballets Russes company, led by artistic director Sergei Diaghilev. The action takes place in front of a circus tent as performers show off their tricks and managers call out to spectators to draw them inside. With three masters of the avant-garde giving their talents full rein, it was a groundbreaking work. Yamamura’s film recreates the ballet’s debut performance, accompanied by the Willem Breuker Collective’s music. Satie, Cocteau, and Picasso also appear in the animation.

“In short works, an equal relationship between music and images creates a complete new world. Some people never listen to Satie or modern classical music. They may find this animation difficult to understand. But it’s a chance to encounter the music, and watching the film provides fresh surprises. I hope some viewers will find themselves wanting to listen to more of Satie’s compositions and Breuker’s jazz.”

The trailer for Sati no “Parādo” (Satie’s Parade).

Music also plays a major role in Mizu no yume (Water Dream). This short four-part work in traditional Japanese ink depicts life in the ocean from its initial emergence to the evolution of the whale. The August Yamamura selection includes the first four-minute section. Water Dream will be completed around the autumn of 2017. French pianist Catherine Verhelst commissioned the film, watching each section herself before composing accompanying music.

Also in the selection is the odd and somehow humorous six-minute film Kaibutsugaku shō (Notes on Monstropedia). Yamamura has stated a desire to adapt the eight-century Kojiki (Record of Ancient Matters), which gives the mythic origins of Japan. Some early stories are gathered in the twelve-minute Kojiki: Hyūga hen (The Hyūga Episode of Kojiki), another film in the varied selection.

Yamamura chose the title for his film selection, Migi me to hidari me de miru yume (Dreams Seen with the Right Eye and Left Eye), based on another Satie work, Choses vues à droite et à gauche (sans lunettes) (Things Seen Right-to-Left [Without Glasses]). “I took the idea from the title of the piece. Animations are dreams you see while your eyes are open. They’re dreams that keep both your right and left brain thoroughly active. The phrase ‘without glasses’ is a little sarcastic. Looking to the right and left, the viewer seems to see (or understand) everything perfectly, but in fact can’t see at all. . . . Unlike Satie, I am entirely straightforward in simply hoping the audience will enjoy the films.” 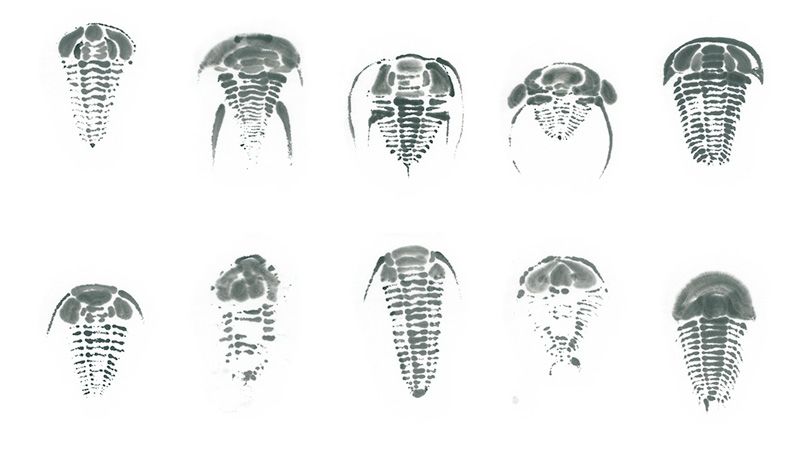 Early life in the first section of Mizu no yume (Water Dream). 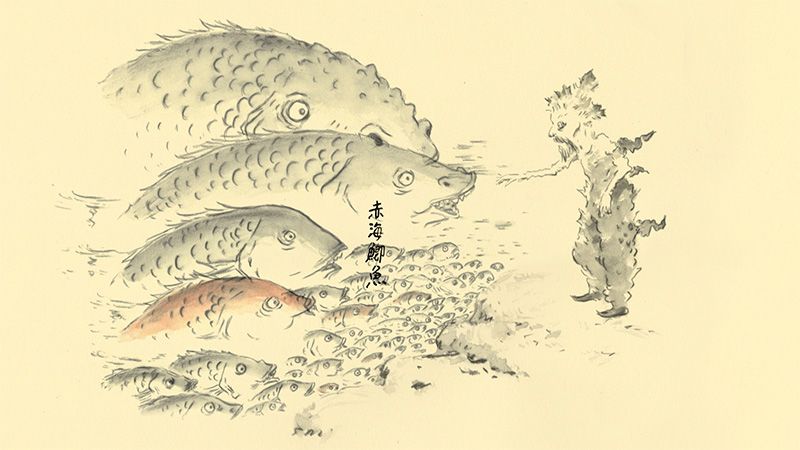 Kaibutsugaku shō (Notes on Monstropedia) imagines a book about European monsters in the Middle Ages. A picture book was published in July.

(Originally written in Japanese by Itakura Kimie of Nippon.com. Photos by Ōkubo Keizō.)