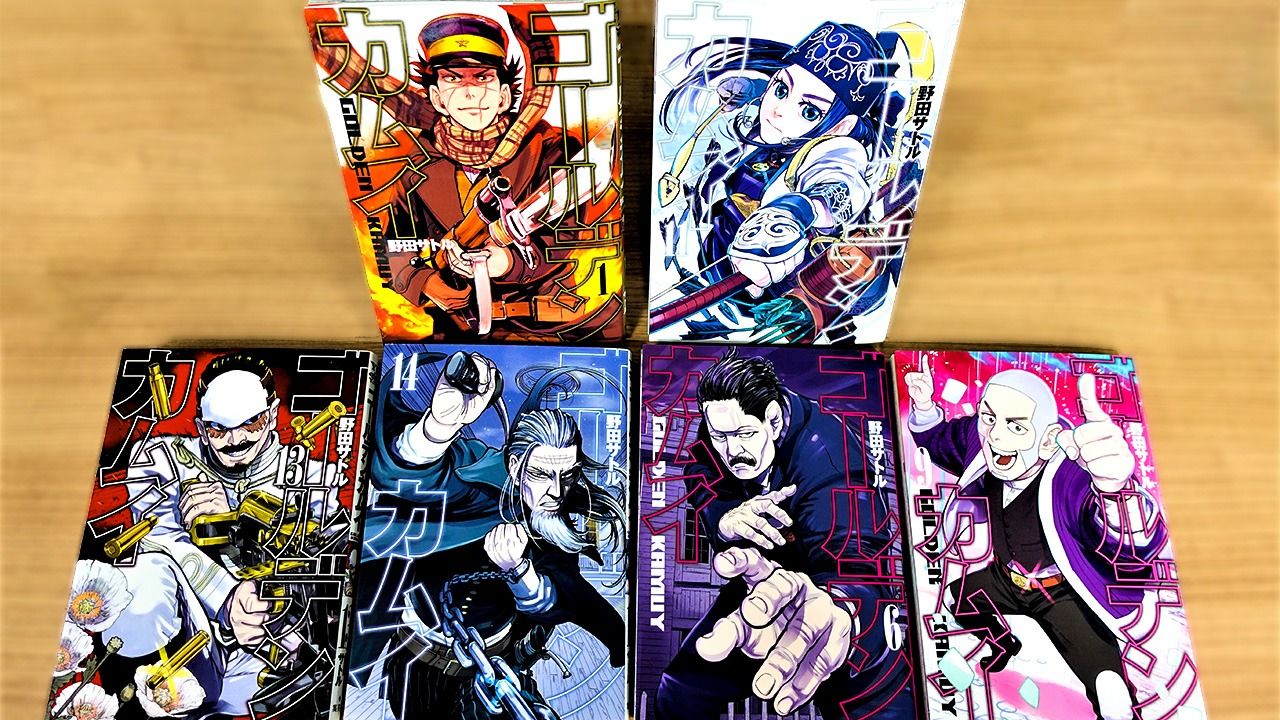 Culture Manga Sep 2, 2022
July 19 saw the release of the final volume of Golden Kamuy, Noda Satoru’s popular manga set in Hokkaidō and Sakhalin in the early twentieth century. With English-language editions and an anime adaptation earning obsessive fans around the world, Hotta Junji considers the secret to this comic’s staggering success.

A Global Hit That Epitomizes the Essence of Manga

Originally serialized in Shūeisha’s weekly teen comic anthology Young Jump, as of July 2022, Noda Satoru’s Golden Kamuy has sold over 19 million copies of its 31 full-length volumes, with a live-action cinematic adaptation also in the pipeline.

In 2019, the series even became the international “face” of manga when featured in promotional visuals for a major manga exhibition at London’s famous British Museum. And it could be argued that Golden Kamuy provides an answer to the question, “What is it that manga seeks to express?” The answer is: perversion. Or if that seems misleading, then the primal energy we might call human desire.

The story begins in Hokkaidō, shortly after the end of the 1904–5 Russo-Japanese War. An island around the size of modern-day Austria, Hokkaidō sits at the metaphorical “head” of the Japanese archipelago. And to its north, a short distance across the Sōya Strait, is the island of Sakhalin, former site of the Japan-Russia border. Returning soldier Sugimoto Saichi, a central character in the tale, arrives in Hokkaidō after the war in the hope of finding his fortune amid the territory’s ongoing gold rush.

Things don’t pan out as hoped, but before long, Sugimoto hears word of a hidden stash of gold hoarded by a group of Hokkaidō’s native Ainu people during their resistance against the expansion of mainland Japanese. Rumor has it that a man has murdered a number of Ainu and hidden the gold before being captured and sent to the remote Abashiri prison. There, he tattooed a coded map across the bodies of 24 condemned fellow inmates, who escaped after murdering soldiers who were transporting them in the hope of deciphering their secret.

“Whoever can unite these tattoos and crack the code will find the gold.” Having heard these words from a fellow prospector, Sugimoto initially writes them off as the ramblings of an elderly drunkard. But the old man’s friendly countenance soon changes, and he turns a gun on Sugimoto, insisting he’s given away too much.

A struggle ensues, and Sugimoto gains the upper hand and begins pursuing his assailant. He then encounters a young Ainu girl named Asirpa, a skilled huntress with in-depth knowledge of the local wilderness, and the pair join forces to search for the hidden treasure.

But they aren’t the only ones on the trail, and they find themselves embroiled in a battle for gold amid the northern wilds that pits them against the deviant desires and motivations of rivals including the elite 7th Division, said to be the strongest combat unit of the Imperial Japanese Army, as well as the formidable criminals who make up the gang of 24 escapees. 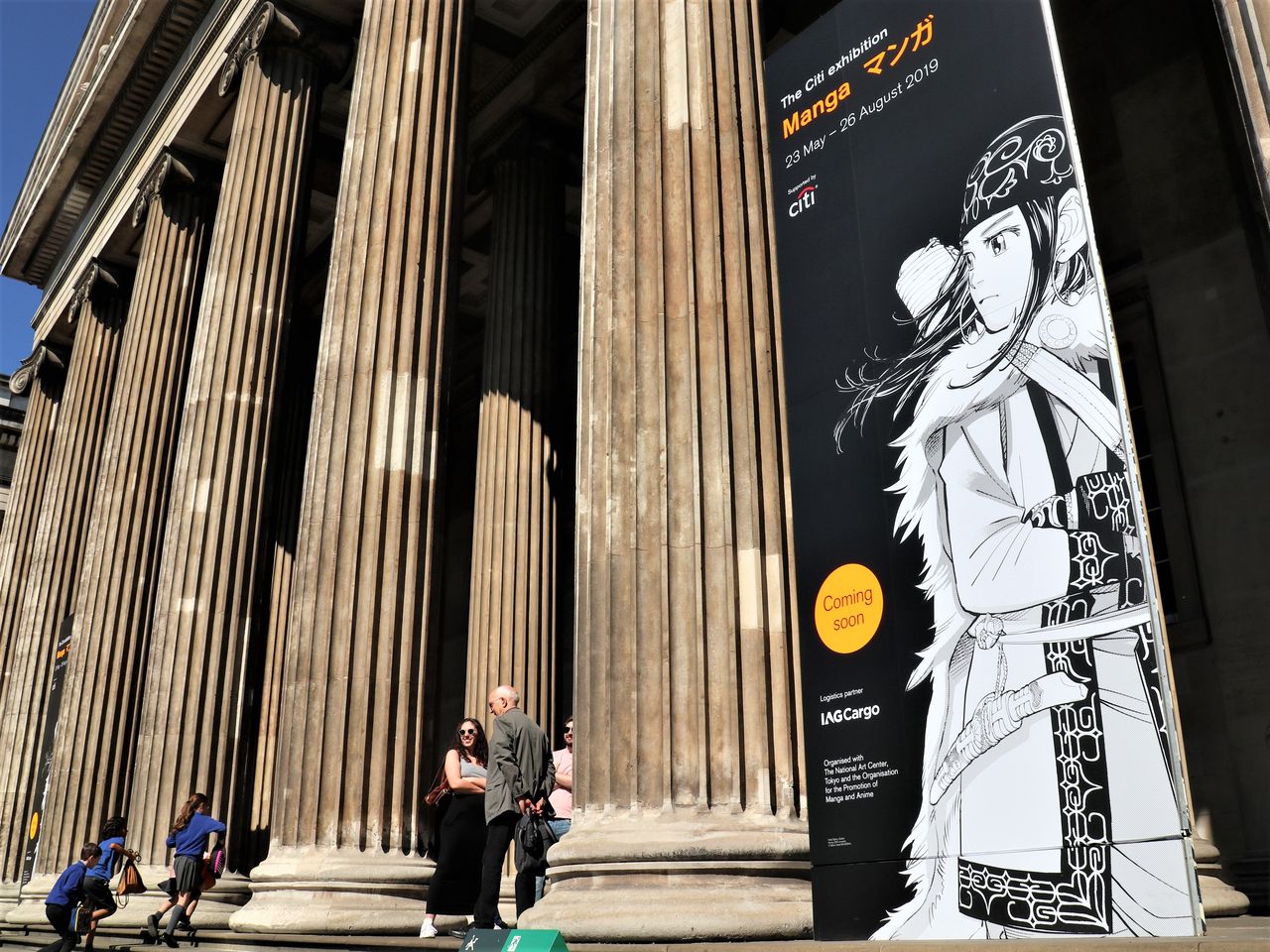 Minority Groups in a Liminal Age

In differing ways, all those engaged in this race could be described as outcasts from mainstream society. The troops of the 7th Division, for example, have been abandoned by their government.

The mid-nineteenth century saw feudal Japan caught up in the wave of colonial expansion undertaken by Western powers. A response to these changing times, the Meiji Restoration was a period of intense modernization that included the formation of Japan’s first civilian parliament. And the new government’s approach to national security saw it engaged in two all-out wars with regional neighbors—first Qing Dynasty China and then Imperial Russia. From peasants to craftsmen, thousands of civilians were sent to the front line, and although Japan would ultimately triumph in both conflicts, many laid down their lives on foreign shores amid the unprecedented brutality of modern warfare.

In Golden Kamuy, the 7th Division is led by Tsurumi Tokushirō, a lieutenant left deranged and disfigured by a battlefield injury. His quest for the gold is driven by a desire to ensure that the wartime deaths of his comrades have not been in vain, by using the riches to install a military government in Hokkaidō. Despite his abnormal demeanor, Tsurumi is possessed of a fearsome intellect as well as almost mystical levels of charm and charisma. And at his command is a crack team of fighters fresh from the theater of conflict.

A second group of outsiders is those left behind by history: the escaped convicts, led by the proverbial “last samurai” Hijikata Toshizō, a character loosely based on the historical figure of the same name.

Prior to the Meiji Restoration and the birth of civilian government, feudal Japan was ruled by the samurai class. The real-life Hijikata found himself fighting against governmental forces on the side of the former shōgunate, before meeting his end in battle while trying to establish Hokkaidō as an independent state.

But in Golden Kamuy, Hijikata did not die, and was in fact imprisoned at Abashiri, where he became one of the 24 inmates tattooed with fragments of the treasure map. Even in old age, he has lost none of his combative spirit, swordsmanship, or tactical acumen, and is once again striving for Hokkaidō’s independence.

In the quest for the gold, Hijikata’s faction, composed of fellow escapees from Abashiri, includes numerous fearsome fighters, including one supreme exponent of judō and a blind, but deadly, gunman, as well as several more surviving samurai. 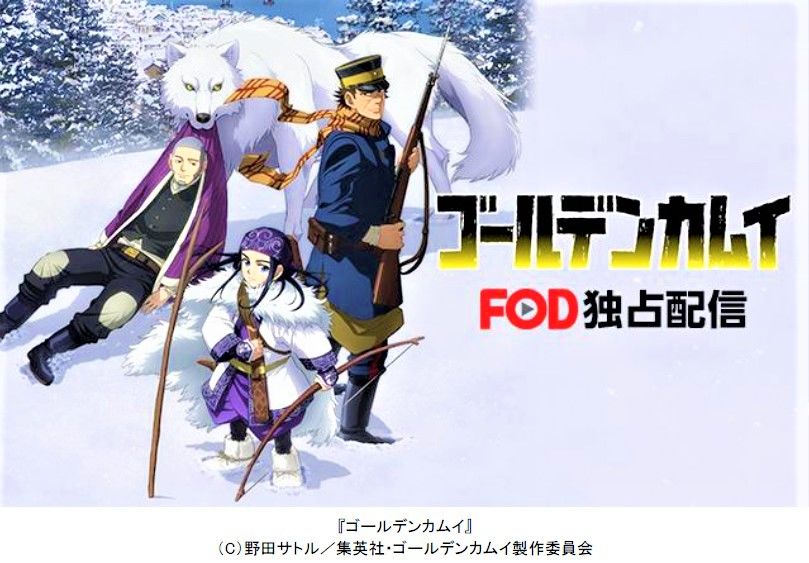 The first season of Golden Kamuy’s anime adaptation went on air in 2018, with the fourth season scheduled for broadcast from October 2022; all episodes can be streamed on demand in Japan via the online service FOD. (©︎ Fuji TV)

Ainu Worldview at the Story’s Core

Sugimoto, too, is an outcast, as his family members were shunned by residents of their village in Kanagawa Prefecture after becoming afflicted by a deadly infectious disease.

Sugimoto is the lone survivor in his household, and after the contagion claims his last family member, he sets fire to their home and departs the village, leaving behind his soulmate and former romantic partner Umeko. Returning two years later, once satisfied that he himself is free from disease, he is shocked to find that in his absence his true love has married his best friend Kenmochi Toraji.

But Umeko begins to lose her sight, while Kenmochi is sent to war alongside Sugimoto, where he dies on the battlefield. Promising his dying friend that he will look after his widow and child, it is the realization that he needs money to fund treatment for Umeko’s failing eyes that drives Sugimoto to seek his fortune in Hokkaidō.

Having been unable to stop the disease that took his family, what keeps Sugimoto going (aside from his incredible toughness, martial prowess, and athleticism) is the growing belief that he is immortal.

Finally, Asirpa-san (as Sugimoto insists upon calling her, with the respectful suffix added to her name) is a member of one of Japan’s ethnic minorities. In prehistoric times, the ancestors of the Ainu people lived as hunter-gatherers across the length and breadth of the Japanese archipelago. But as a rice-based agrarian society began to take root, they were driven farther north, with Hokkaidō becoming their final bastion. Medieval times saw the emergence of a unique Okhotsk culture, whose people traded with mainland Japanese. But from early modern times, the mainland’s economic dominance grew, and from the Meiji Restoration onward the loss of Ainu culture even extended to the forced adoption of Japanese names.

But the Ainu worldview and understanding of life in harmony with nature remained, as did the hardiness required to survive in the harsh wilderness of Hokkaidō. In fact, another key appeal of Golden Kamuy is as a portal into the Ainu lifestyle, mindset, and innovations, as well as the hunter-gatherer existence still practiced by Asirpa and her kind.

And while the hidden gold is part of her people’s heritage, Asirpa’s own reasons for joining the hunt are more personal: to discover what happened to her father (who is thought to have died protecting the treasure), to learn more about the responsibility entrusted to her, and indeed to find out who she herself really is.

But while these characters may all represent minorities, that is not to say they are weak and in need of protection—for if they were, they wouldn’t last long in this battle for gold amid the harsh northern landscape. Indeed, every single individual portrayed is overflowing with the power it takes to survive.

If I can be excused for turning to a personal anecdote, while working for a manga publication in my younger days, a senior colleague once told me: “Manga’s no good as a mode of expression if it isn’t connected on some fundamental level to human libido.” When that libido strays too far into the red zone, one might be denounced as a pervert. Golden Kamuy is full almost to bursting with just such perversion.

What, indeed, is the art form called manga in the first place? I have heard it described as a form of expression offering wholehearted support for human desires—a definition I must admit to agreeing with. But it is precisely because the desires in question are universal human lusts that manga has found such broad popularity across national borders. Golden Kamuy is one work throwing this into particularly sharp relief.

The fascinating part is how the different actors pursuing the gold are actually bound more tightly into groups by the differing ways they move through the world. The soldiers of the 7th Division undergo twisted psychological manipulation that only brings them more strongly together, while Hijikata’s group, at least at the beginning of the story, find unity in their shared goals. Sugimoto and Asirpa, and later Shiraishi, a master jailbreaker who joins them, build their ties to one another on strong bonds of trust.

When examining the connections that tie people together, it is the nation that tends to be the largest unit used to define their ties. Golden Kamuy, as a tale of those who have both forged and broken connections, is an explanation of how people create “countries” of their own. I hope you will find the time to discover how, at the very end of the story, this comes to pass through an unexpected source, in an unexpected manner.

(Originally published in Japanese on July 16, 2022. Banner image: Standalone volumes of Golden Kamuy, with each bearing one of the story’s idiosyncratic characters on its cover. © Nippon.com.)