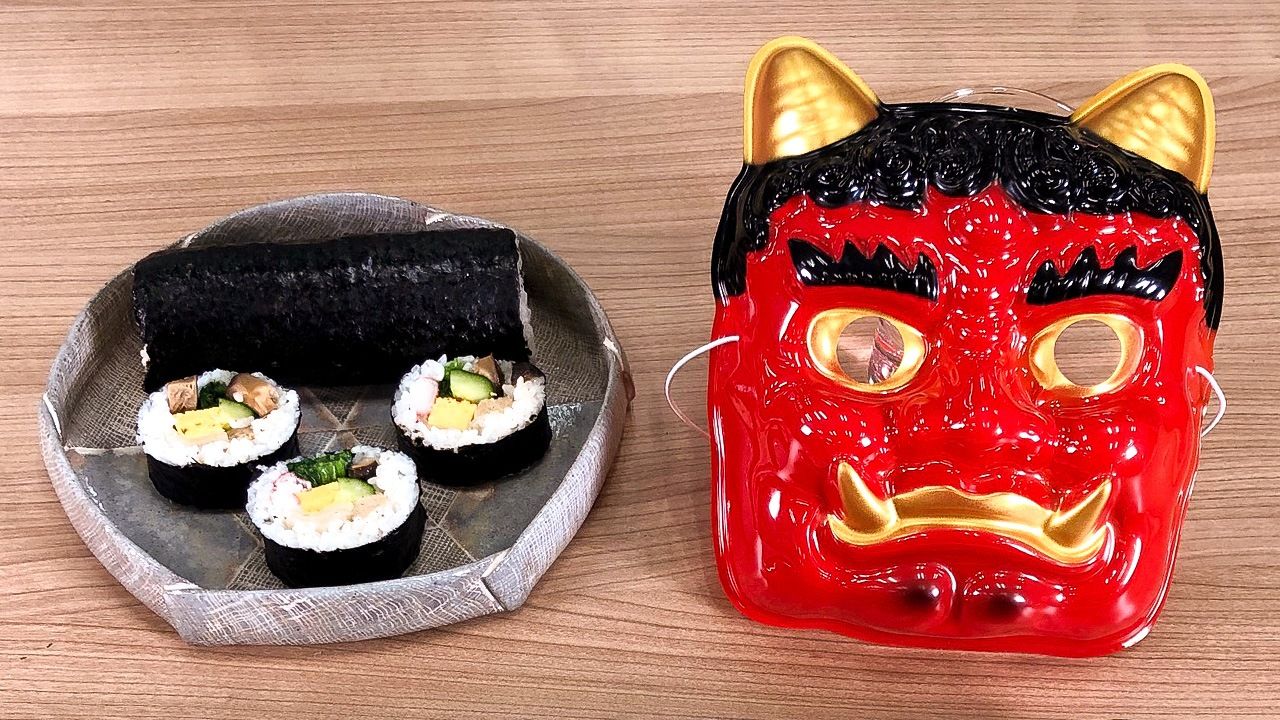 Guide to Japan Culture Feb 1, 2019
Ehōmaki are a type of rolled sushi said to be packed with good luck. We introduce and try our hand at rolling this relatively recent addition to the setsubun tradition.

In Japan, the lively custom of flinging roasted soybeans to banish troublemaking ogres is an established part of the setsubun tradition observed on February 3. In recent years a new observance, the gobbling down of fat ehōmaki sushi rolls, has been edging its way into the seasonal repertoire of events.

Wrapped Up in the Season

Ehōmaki are a variety of futomaki, robust rolled sushi that are stuffed with an array of ingredients. Cooks are free to choose their fillings, but what sets the hearty roll apart from other types of sushi is its reputation for assuring eaters good luck and its highly unusual manner of consumption.

According to the old lunar calendar, setsubun marks the division between winter and spring, a precarious time when malevolent spirits run amok, and seasonal customs revolve around driving out misfortune and ushering in health and prosperity. In this vein, ehōmaki typically contain seven ingredients—a lucky number corresponding to Japan’s shichifukujin, or Seven Gods of Fortune. To reap the roll’s rewards, though, setsubun celebrants must devour the whole bundle, one bite at a time, in total silence while facing a predetermined lucky direction, or ehō.

The correct direction to face shifts from year to year and follows a set cycle determined by onmyōdō, Japan’s traditional esoteric cosmology. Eaters this year are meant to face east-northeast while they munch.

The origins of ehōmaki are frustratingly obscure. Traditional Japanese numerology explains the amount of sushi roll ingredients—lucky seven being nearly universal—but the significance of other peculiar elements is hard to pin down. One theory ascribes the beginnings of the ehōmaki practice to an advertising campaign by an Osaka seafood cooperative a little under a century ago.

The tradition is commonly observed in Osaka and the surrounding Kansai region, but is slowly making inroads into other areas of Japan. Convenience stores and supermarkets have led the nationwide ehōmaki charge, and shops now stage seasonal promotional campaigns for special-order and gourmet rolls in the hope of enticing customers to buy into the custom. Sales have subsequently grown, making ehōmaki a lucrative means to boost sales during the slow period between New Year and Valentine’s Day.

Naturally, not everyone finds gulping down a fat sushi roll an alluring proposition—many native Tokyoites cringe at it—and it is still far from being a widely established setsubun practice. Overproduction has also become an issue, and in the last few years some stores have dialed down their sales efforts after photographs of dumpsters full of unsold sushi rolls triggered social media backlash. Government and consumer groups have also voiced concern about food waste, leaving the reputation of ehōmaki somewhat bruised.

Despite the scandal, ehōmaki, whether eaten sliced or whole, are gradually becoming part of Japan’s rites of early spring.

Fillings (adjust according to preference and availability, but make certain there are seven)