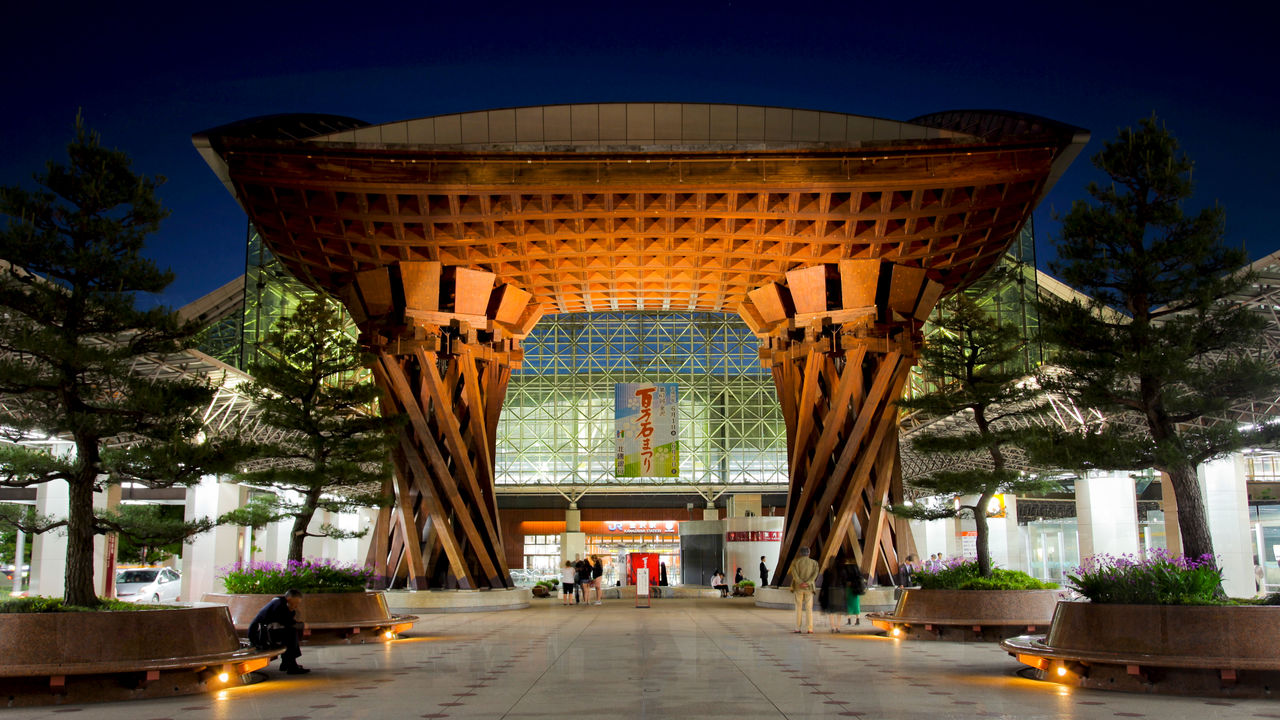 Guide to Japan Oct 24, 2018
A video tour of the best night views Kanazawa has to offer, with its blend of historical streets and modern architecture. Included are must-see spots like Kanazawa Castle Park, Kenrokuen Gardens, and the chayagai entertainment districts. 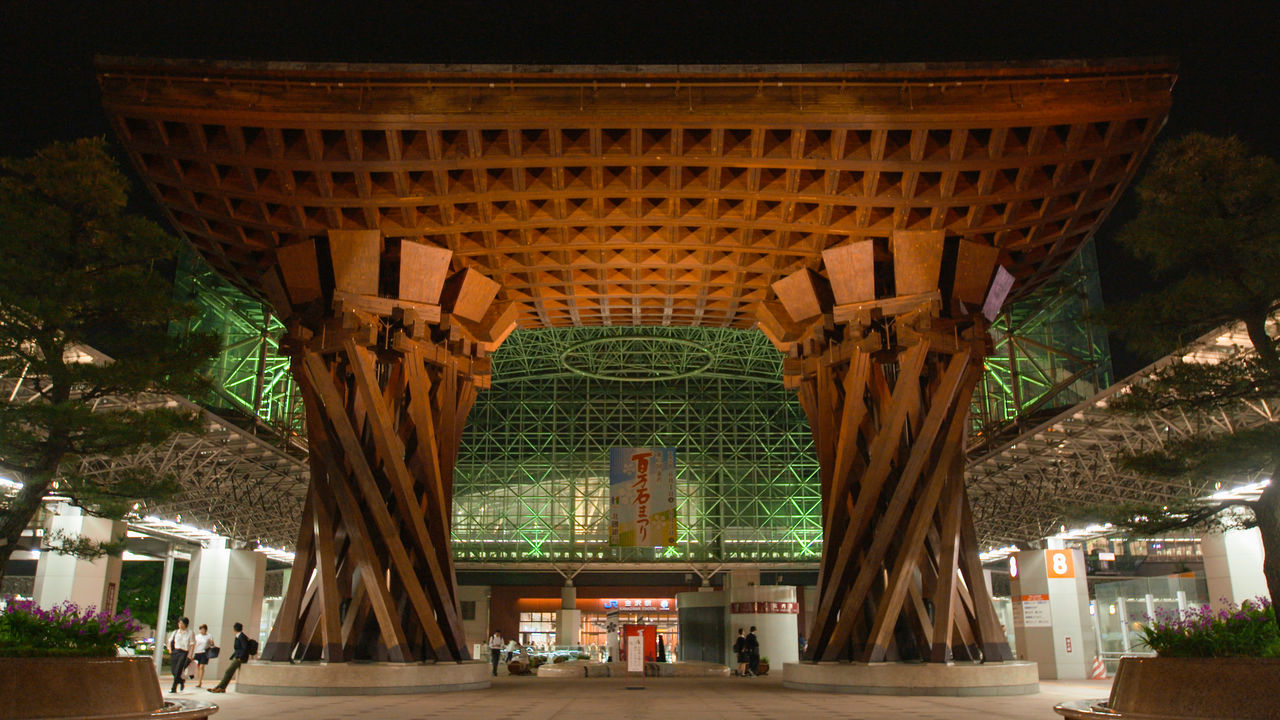 Kanazawa Station was renovated for the launch of the Hokuriku Shinkansen service. In 2011, the station was included on a list of the World’s Most Beautiful Train Stations as compiled by the online edition of Travel + Leisure magazine.

The Tsuzumimon (Drum Gate), set outside the main entrance as a symbol of the station, is based on the tsuzumi drums used in nō, a theater form popularized in Kanazawa. The site becomes even more appealing when the sun goes down and the lights come on. 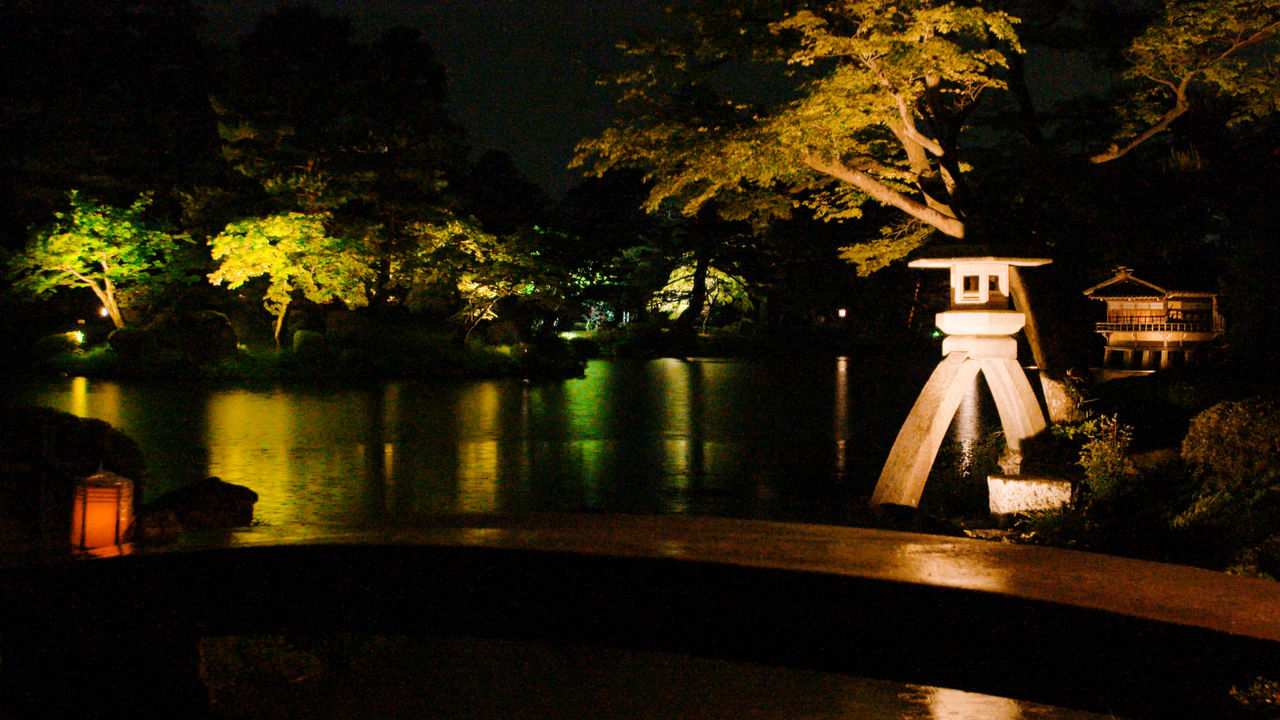 Visitors can experience seasonal nighttime light shows at Kanazawa’s most famed tourist destinations. Various areas are lit up with fantastical lights, including the Three Gates of Kanazawa Castle and Kenrokuen Park’s kotoji-tōrō (a raised stone lantern reminiscent of the bridge of a koto Japanese harp), the Kyokusui stream winding through the grounds, and trees of historical interest.

Within the grounds is Gyokusen’in-maru Gardens, built by Maeda Toshitsune (1594–1658), third lord of the Kaga clan, and modified by his successors. Eliminated in the late nineteenth century, it was rebuilt in 2015. Brilliant lighting brings out the originality of the design in its stone walls. 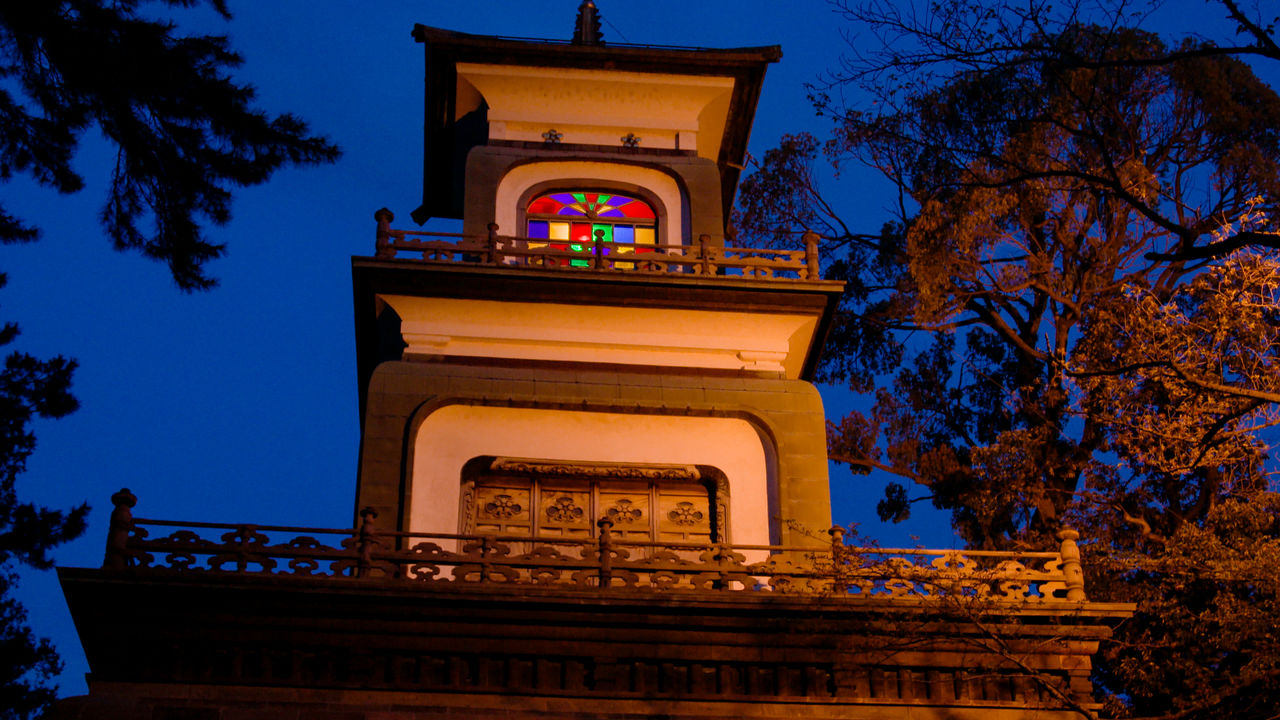 Maeda Toshiie (1538–99), founder of the Kaga clan, and his wife Omatsu are enshrined at Oyama Shrine. Built in 1875 to be the symbol of the shrine, the simply designed Shinmon Gate is a nationally designated important cultural asset. The stained glass window embedded on the third tier represents a blending of Japanese and Western styles, and is positively bewitching when lit up at night. 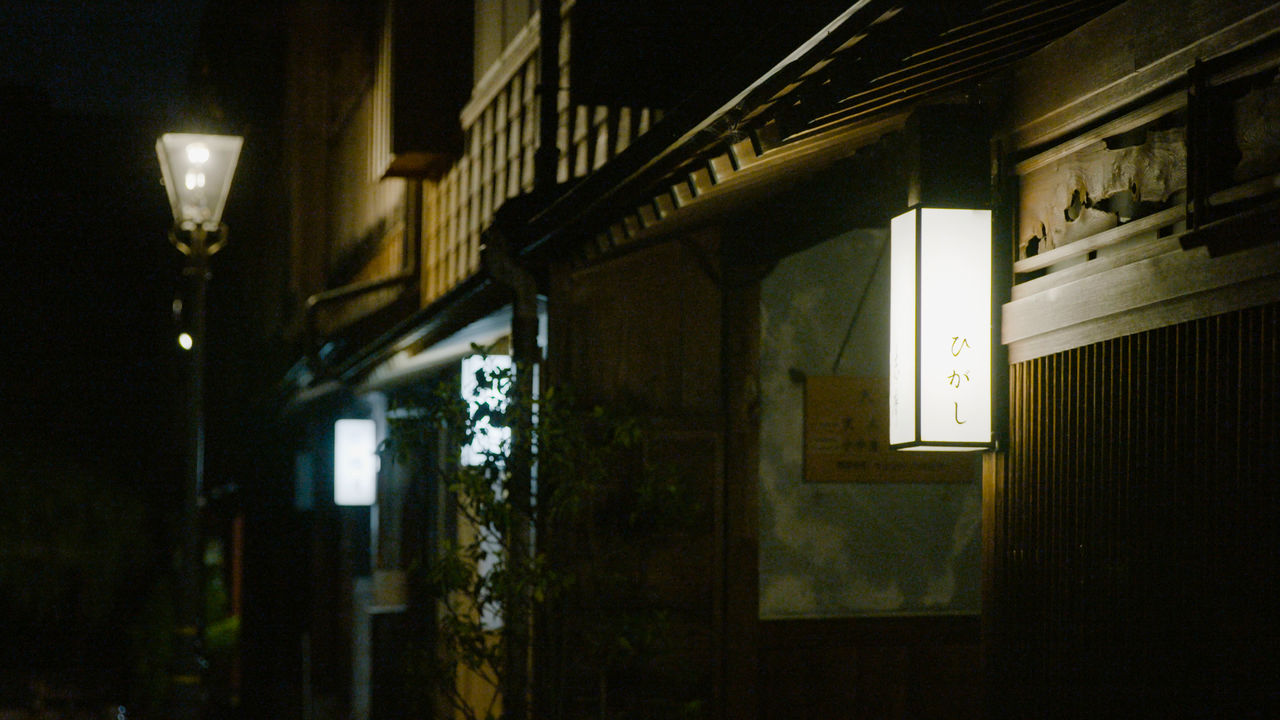 One of three chayagai in Kanazawa, the Higashi district is crowded with tourists during the day. A hush falls over these streets at night, though, when the illuminated flagstones and the buildings in classical Japanese teahouse style evoke the classic charms of a Japanese castle town. 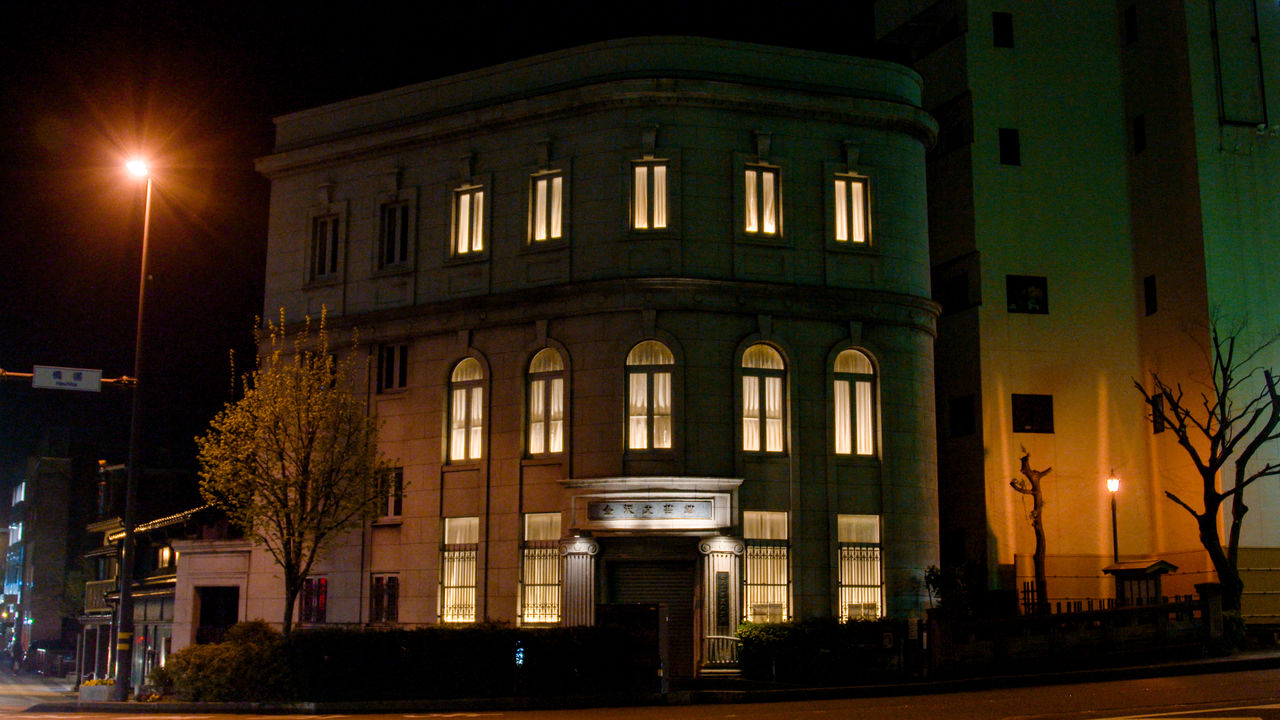 Situated at the Hashibachō intersection in the heart of town, the Kanazawa Literary Hall boasts a collection of publications and collected works of writers native to Kanazawa. Originally built in 1929 as a bank, this example of Western-style architecture has been extensively repaired. The building is bathed in floodlights from sunset to 10:00 at night. 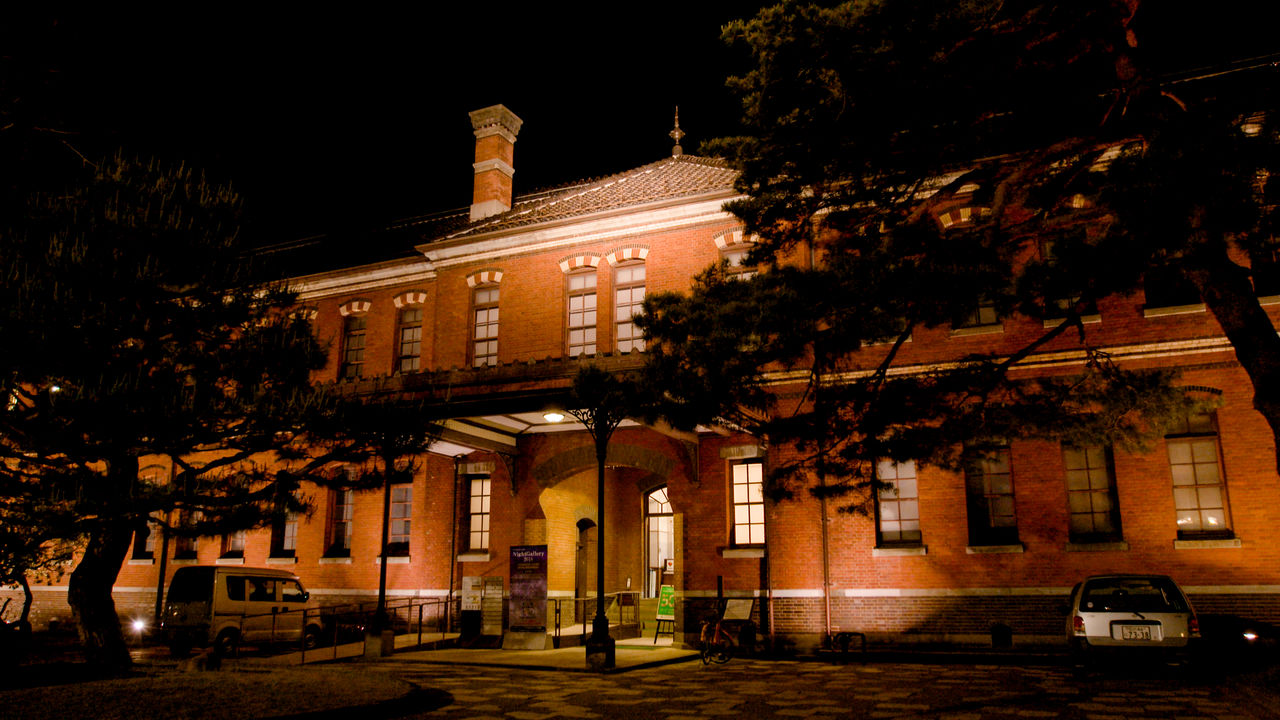 This museum was the Fourth High School under the nation’s new education scheme beginning in 1893, and continuing for some 60 years thereafter. The school counts numerous cultural leaders, politicians, and businesspeople among its former students, including the world-famous Buddhist philosopher Suzuki Daisetsu (D. T. Suzuki), the philosopher Nishida Kitarō, and the novelist Inoue Yasushi. A night gallery is open until 9:00 p.m. on a limited schedule. 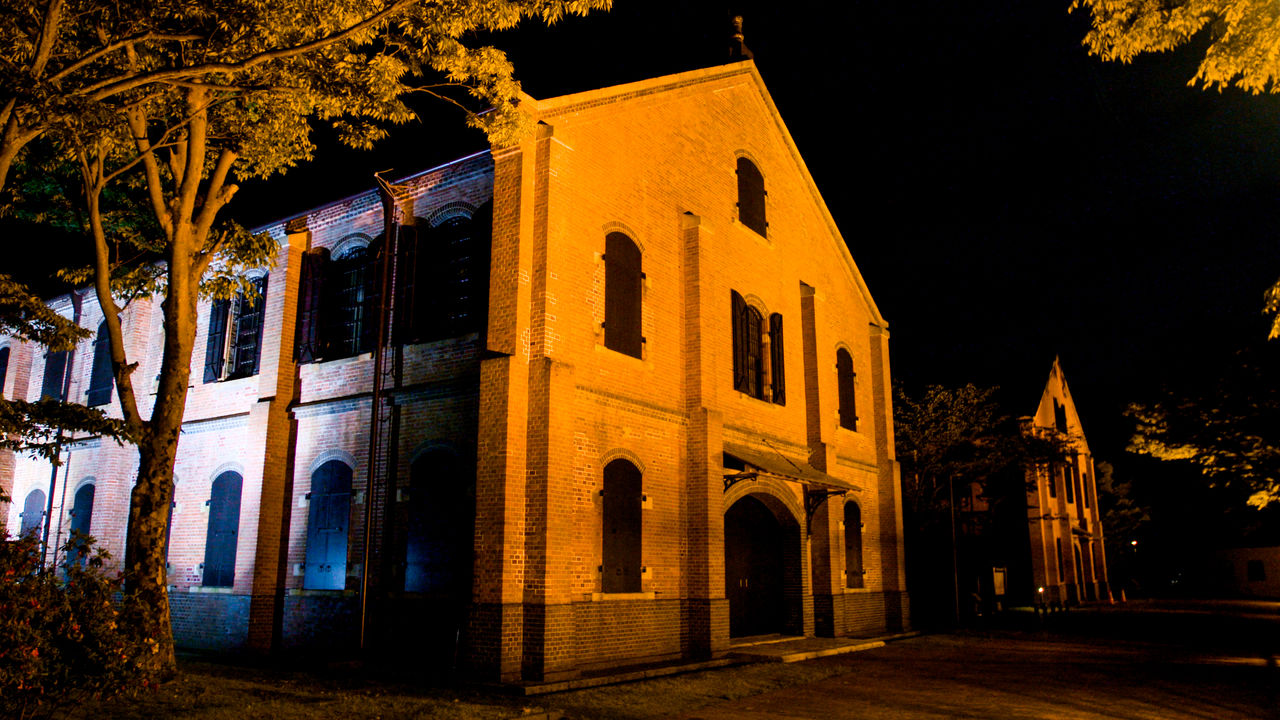 Originally built as an arsenal for the Imperial Japanese Army, these structures became the Kanazawa College of Art after World War II. In their current incarnation as the Ishikawa Prefectural Museum of History, these red brick buildings have been restored. These historic structures, offering even more refined views by night than they do by day, are acclaimed for their preservation and repurposing as a museum, and are designated a nationally important cultural asset. 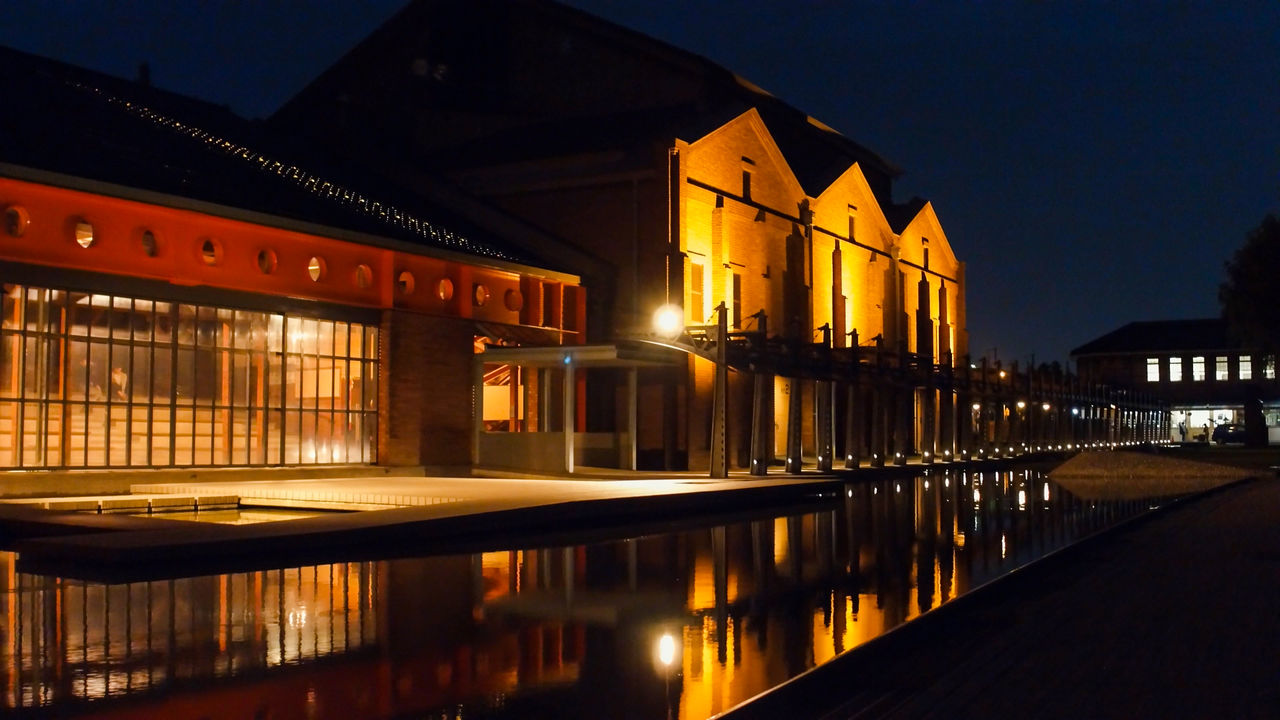 Originally warehouses for cotton mills, these buildings have been extensively repaired and now assist citizens’ artistic and cultural endeavors. Facilities including studios and workshops are provided here for all manner of creative activities, including theater, music, and works of art. The center is open round-the-clock year-round, though the exterior lights are turned off at 9:00 each evening. 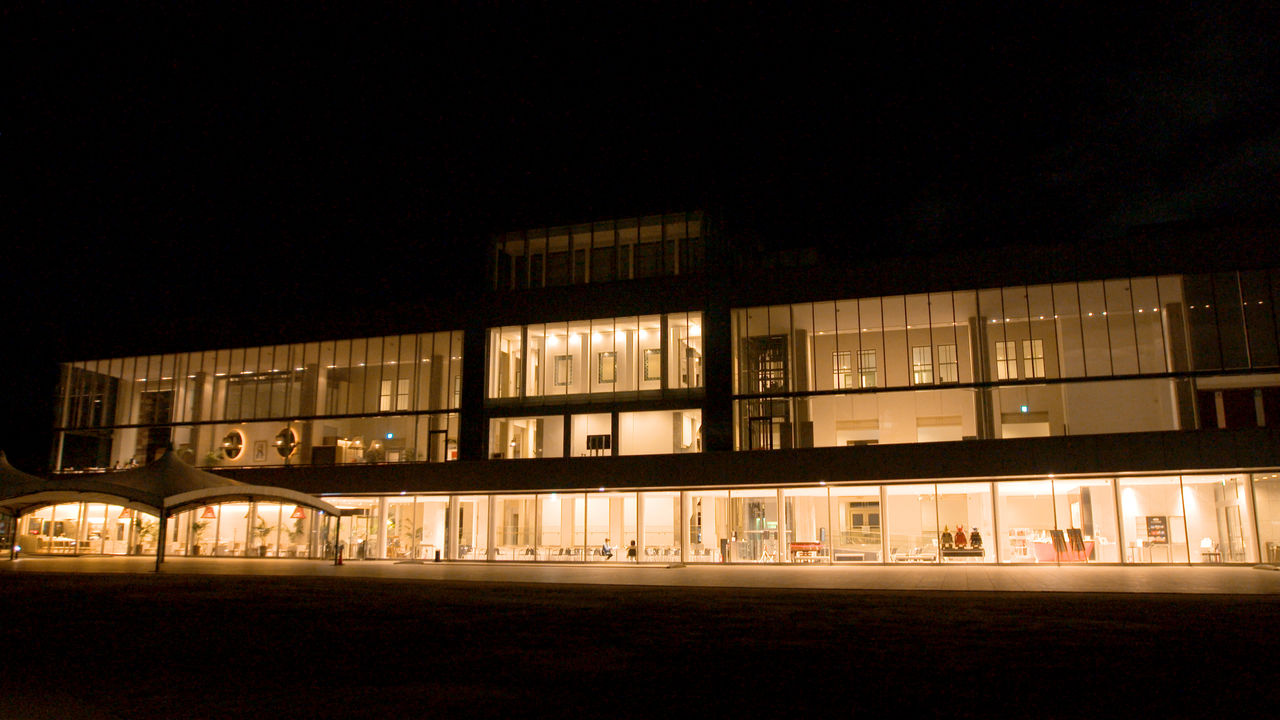 Originally built in 1924 as the seat of the Ishikawa prefectural government, this building underwent extensive renewal and was reopened in 2010 as the Shiinoki Cultural Complex. The front of the building shows off the original red brick façade, while the rear has been dramatically rebuilt to open onto a modernist glass-walled space. The building now serves as a cultural center, offering a tourist information section as well as space for events, seminars, and the like. When lit up at night, it offers a magnificent retro-modern architectural fusion. 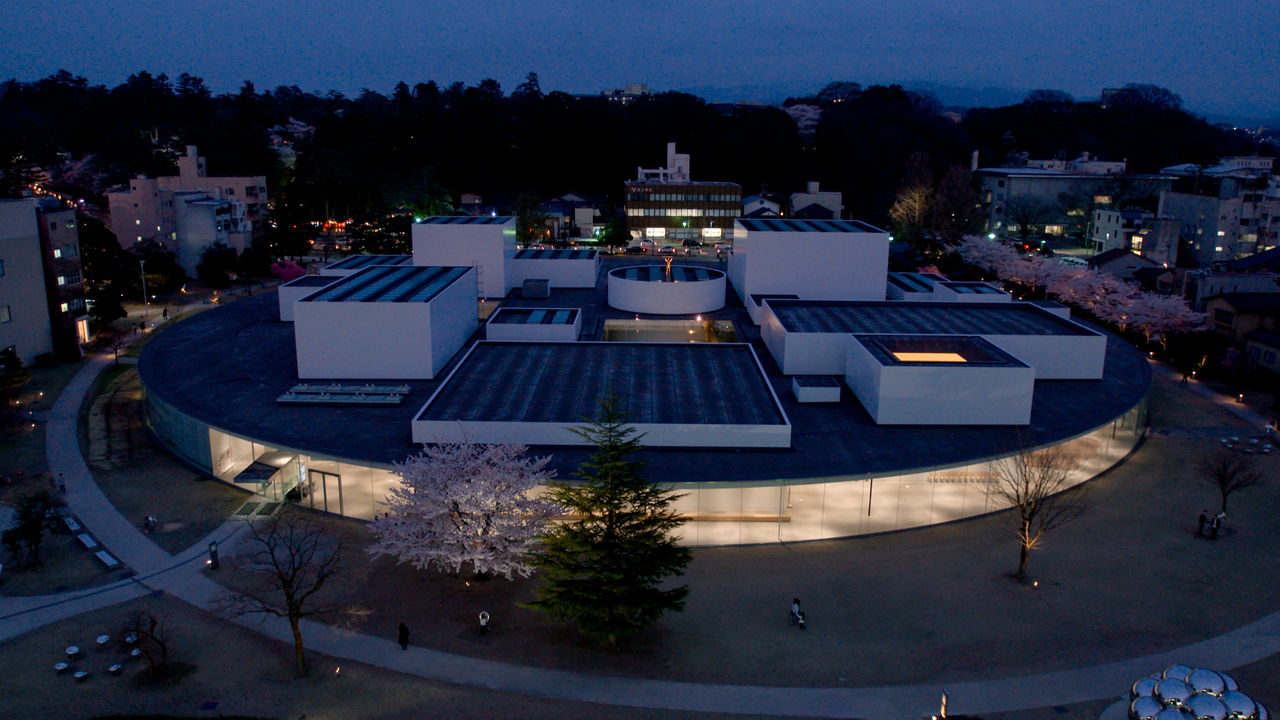 This museum has proved popular for its refined contemporary architectural style as well as for its collections. The outer wall of the circular building is partly made of glass, lending a futuristic aspect to the structure when lit up, as though a flying saucer had landed on the spot.