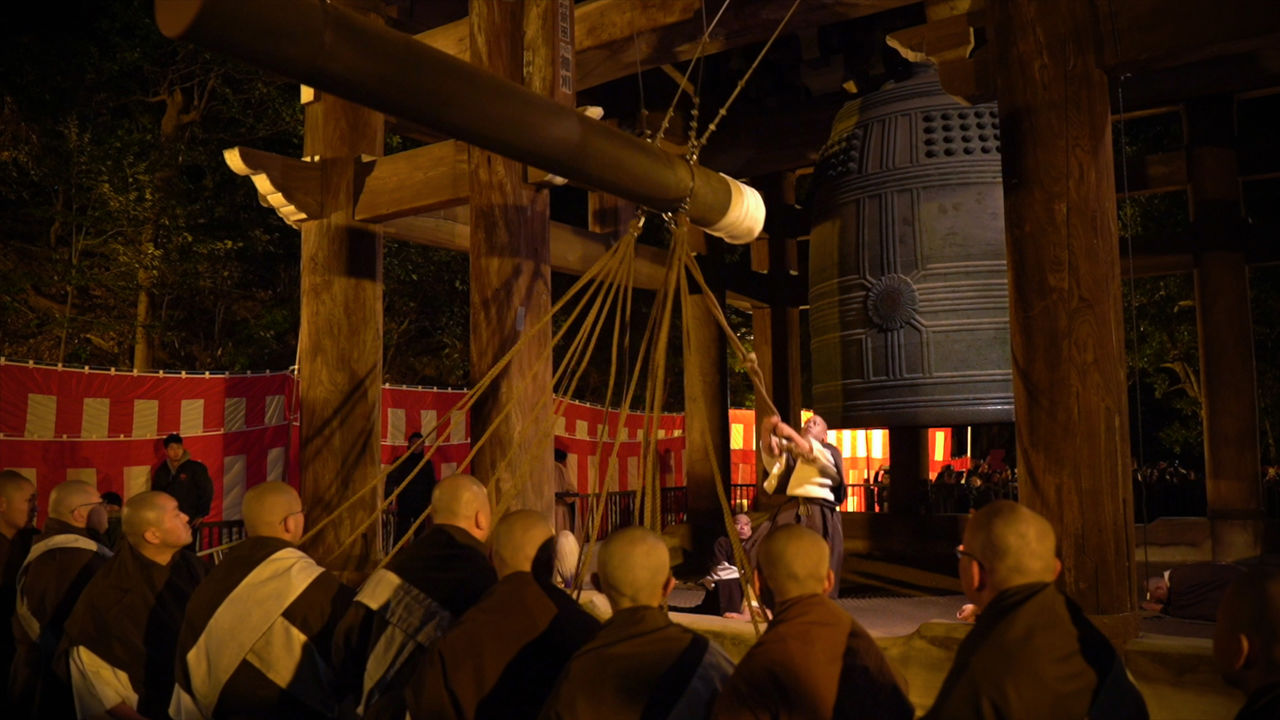 New Year in Kyoto: Ringing Out the Old Year and First Devotions

Guide to Japan Jan 19, 2019
A video selection of New Year’s celebrations in Kyoto, including ringing out the old year at the temple Chion-in and first devotions at Fushimi Inari, Yasaka, and Heian Jingū shrines.

Ringing Out the Old Year in Style

The start of the New Year is marked in Japan by ringing big bells at Buddhist temples late on New Year’s Eve. In a custom unique to Japan, the bells toll 108 times in all, starting before midnight on New Year’s Eve and finishing in the early hours of January 1.

The temple Chion-in in Higashiyama-ku, Kyoto, is renowned for a particularly energetic ritual for ringing out the old year. Established as the principal temple of the Jōdo sect of Buddhism, Chion-in is historically significant. It was built in the place where Hōnen, the founder of the sect, spent the latter part of his life. The great temple bell used in the ceremony of ringing out the old year at Chion-in is truly gigantic, at 3.3 meters in height and 2.8 meters in diameter. With a total weight of some 70 tons, it is one of the three largest Buddhist temple bells in Japan.

The striking of this bell, which is the heart of the ceremony, involves the combined strength of 17 monks. One of these, the striker, holds the lead cord, stands with his back turned to the bell, and calls out a command. In response, the other 16 monks, holding trailing cords, raise the shōmoku, the wooden bell hammer, and at another signal, the striker strikes the bell by bringing all his weight to bear, as though falling on his back. Three more nearby monks perform devotions of prostration, touching the ground with hands, knees, and forehead, while a counter marks the time and delivers signals to the other participants. The ritual ringing out of the year begins around 10:40 pm on New Year’s Eve, and ends around 20 minutes after midnight on New Year’s Day, with the 108th strike. 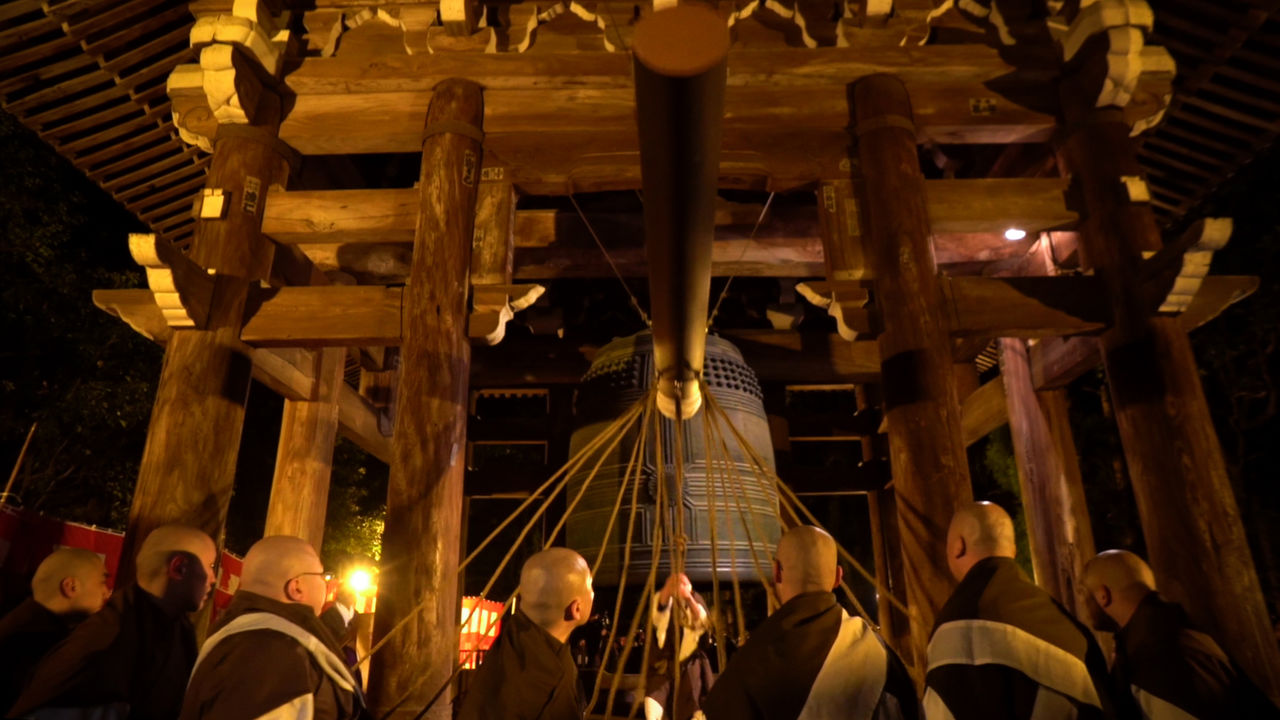 The ringing-out of the old year takes 17 monks to swing the hammer.

Fushimi Inari Taisha shrine, in Fushimi-ku, sees the largest crowds in Kyoto for the first devotions of the year, known as hatsumōde. The head shrine among the many Inari shrines in the country, said to number 30,000 in all, this shrine is known fondly by the locals as o-inari-san, and the senbon-torii, formed from a series of small vermillion torii, is popular with foreign and domestic visitors alike. Concession stalls line the path to the shrine, and it is reported that more than 250,000 visitors make their first devotions here annually. 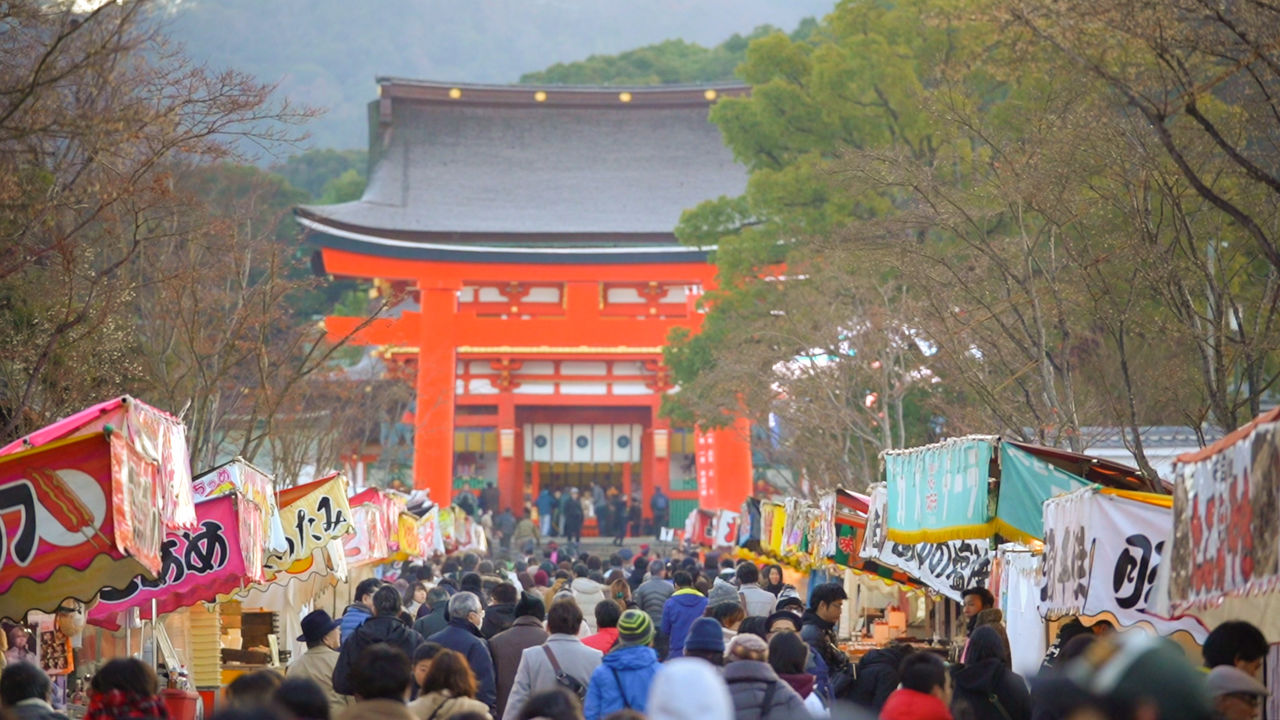 Throngs of worshipers thread their way among the stalls to cover every square inch of the approach to the shrine. 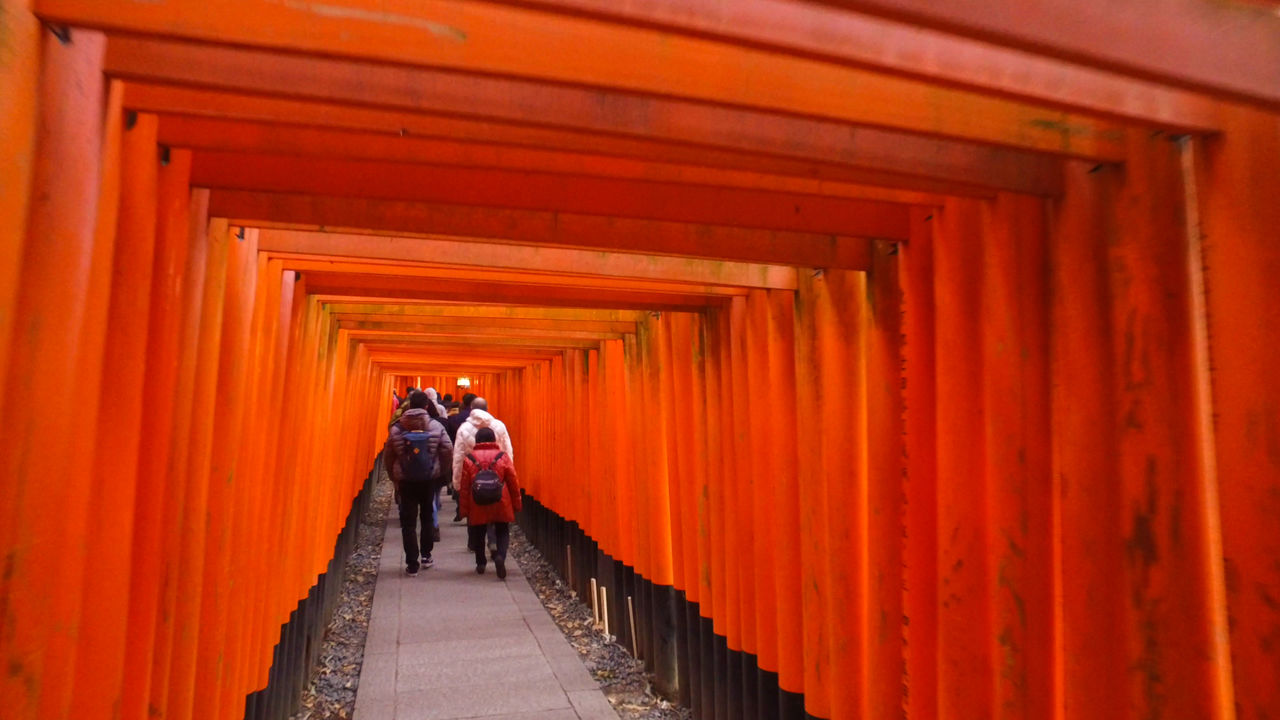 Shrine visitors head up a path lined by the senbon-torii at Fushimi Inari Taisha.

Yasaka Shrine, in Kyoto’s Higashiyama district, is second only to Fushimi in the number of New Year visitors who throng its grounds. Located near the ancient capital’s pleasure quarters of Gion, the shrine to this day retains an air appropriate to this elegant, but festive, part of town. The Okera-sai, a celebration marked in the early hours of January 1 each year, sees visitors capture flames from an okera lantern on a thin rope that burns long enough to take the fire home and use it to kindle the first cooking flames of the year. 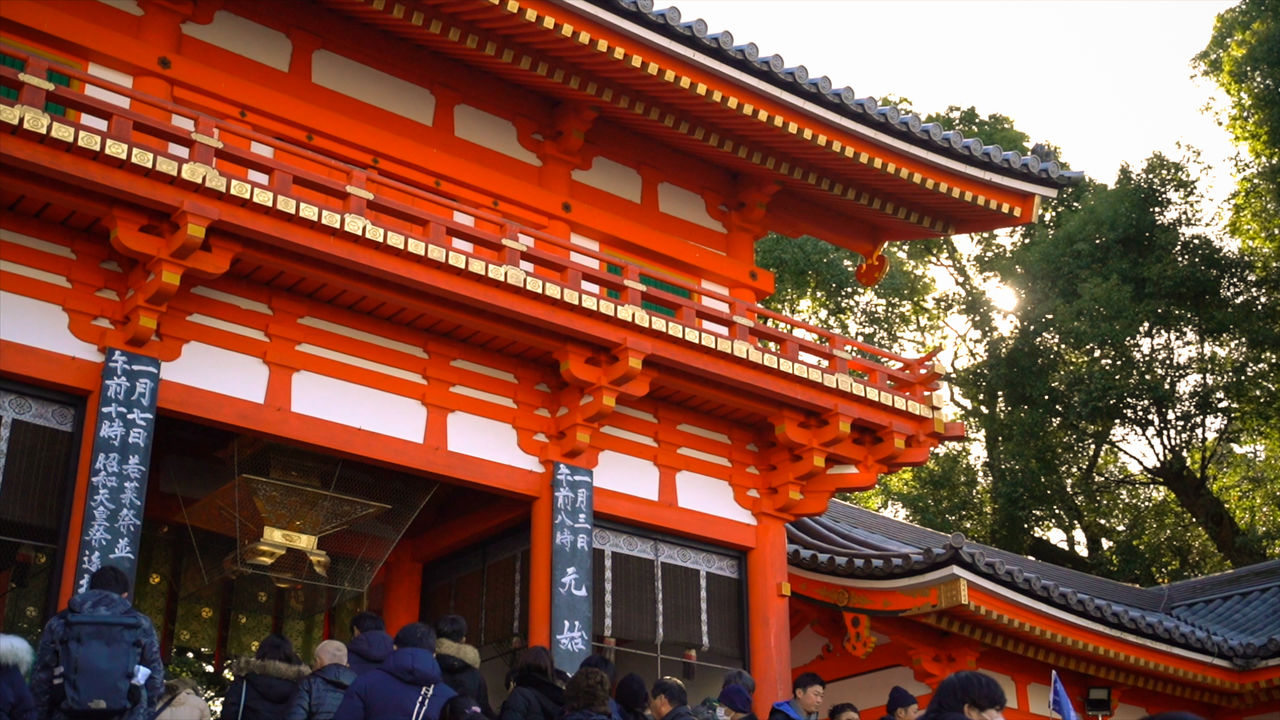 The Nishirōmon gate of Yasaka Shrine is colored in bright vermillion. 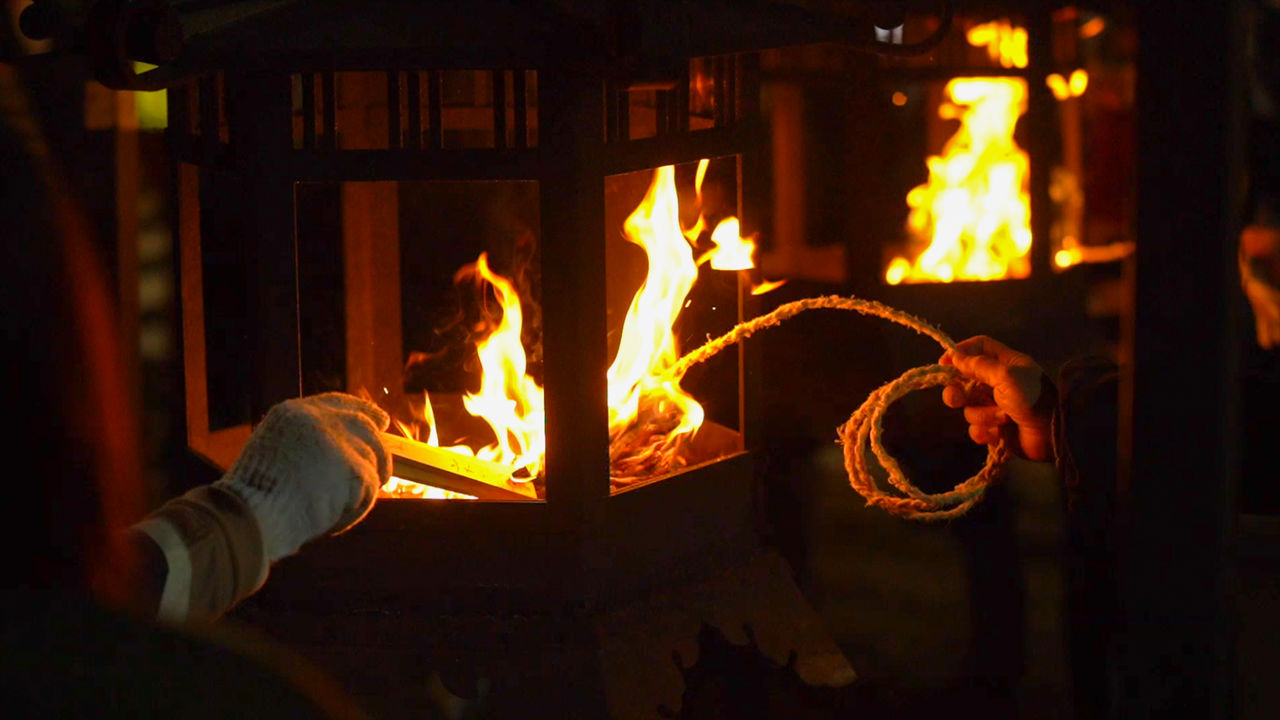 Okera-gi wood, whereon wishes are written, are burned in an okera lantern, and the flames, which worshipers take away with them on match cords, are used in lantern lighting for placing offerings on a Buddhist altar, as well as for lighting stoves to prepare zōni, a traditional New Year’s soup.

Many vistors also attend Heian Jingū shrine in Sakyō-ku, which is known for a festival called the jidai-matsuri. Established in 1895 to commemorate 1,100 years since the capital of Japan was relocated to Heiankyō, the former name of this ancient city, the popular shrine is a reminder of Heian times, with its giant torii and its expansive grounds. The Shūya Mantō, a ceremony of rows of votive lanterns being lit up on the grounds of the shrine on New Year’s Eve, the Saitansai (New Year Festival), and the first nō performance of the year by the Kyoto Nōgaku-kai professional association are also conducted here on New Year’s Day. 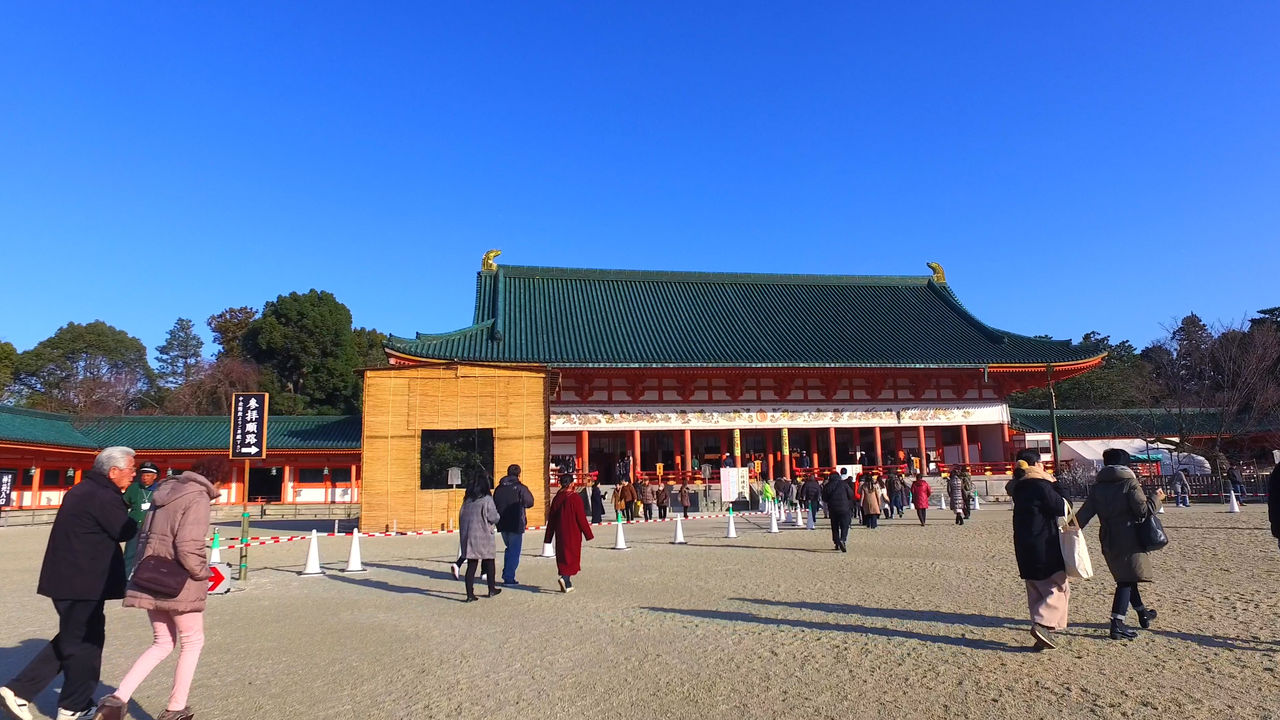 On the expansive grounds of Heian Jingū shrine, worshipers offer prayers for a new year free of illness and disaster, and generally hoping for peace and safety.

(Reporting and videography by Fujii Kazuyuki.)