The Taushubetsu Bridge is nicknamed the “phantom bridge” because it is submerged under water every year around June as the water level rises. The bridge, located in Kamishihoro, Hokkaidō, spans Lake Nukabira, which was formed through the construction of a hydropower dam. From September of this year, there has been far less water in the lake than usual. Iwasaki Ryōji, a cameraman who has frequented the lake over the past 15 years, says that visitors to the area now can witness scenery that has not been visible for the past decade, including exposed tree stumps on the bottom of the lake and green vegetation at the base of the bridge. 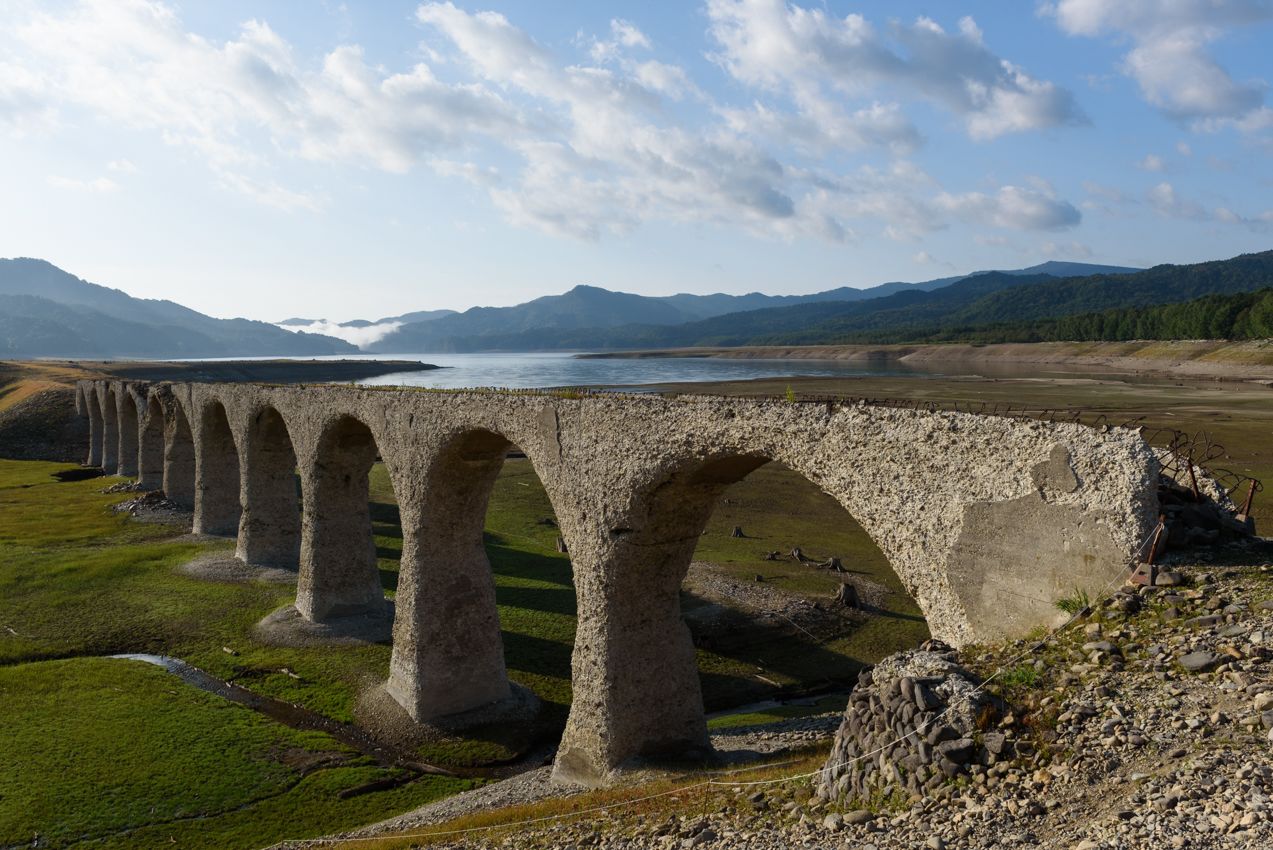 The water level in Lake Nukabira usually starts rising around April every year as snow begins to melt. In September 2018, Taushubetsu Bridge was completely submerged by water. Even in 2019, when there was relatively little rainfall, the bridge was half covered in water. The combination of a light snowpack last winter and little rainfall this year seems to have resulted in the lake’s current low water level. 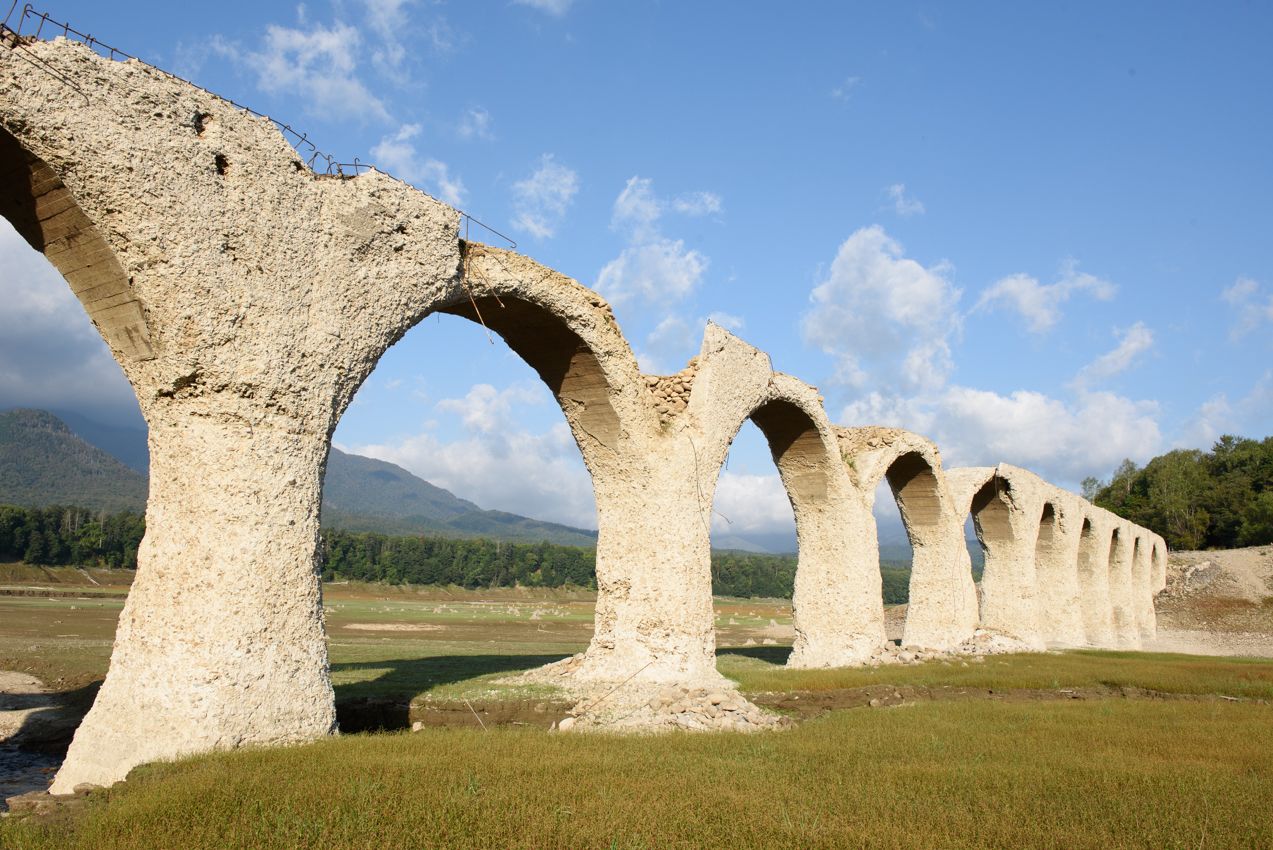 Taushubetsu Bridge exposed all the way to the ground, September 2020. (© Iwasaki Ryōji)

Taushubetsu Bridge is made of concrete, spans 130 meters, and stands 10 meters in height. It was built in 1937 to span the Taushubetsu River for the Japanese National Railways Shihoro Line. The train line was rerouted when Lake Nukabira later came into existence and submerged the bridge, and today only the arches of the bridge remain. Since the bridge appears and disappears, depending on the level of the lake, it has come to be known as the “phantom bridge.” 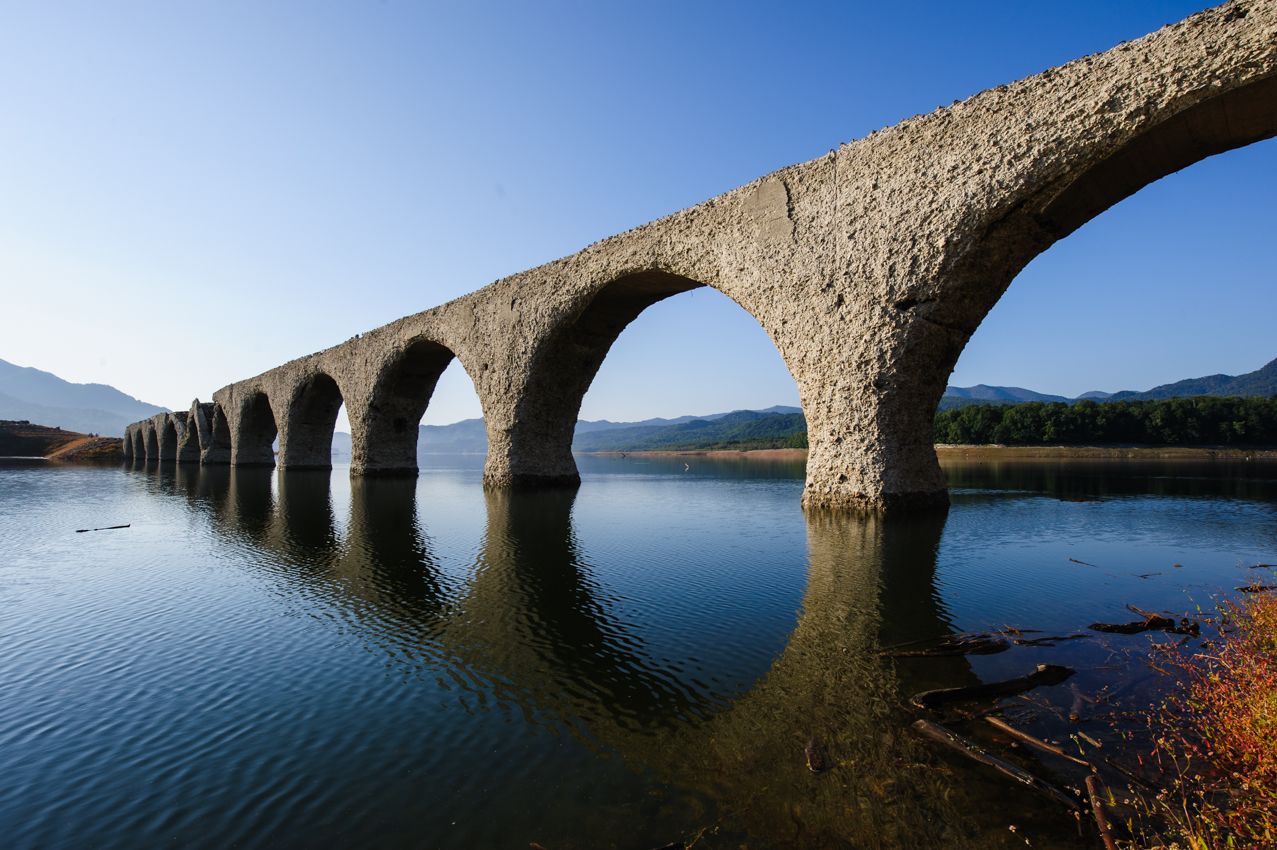 The bridge’s registration as a Hokkaidō Heritage site and its appearance in JR promotional posters, as well as its frequent appearance on social media, have increased its popularity, attracting tourists and photography enthusiasts from around the country. 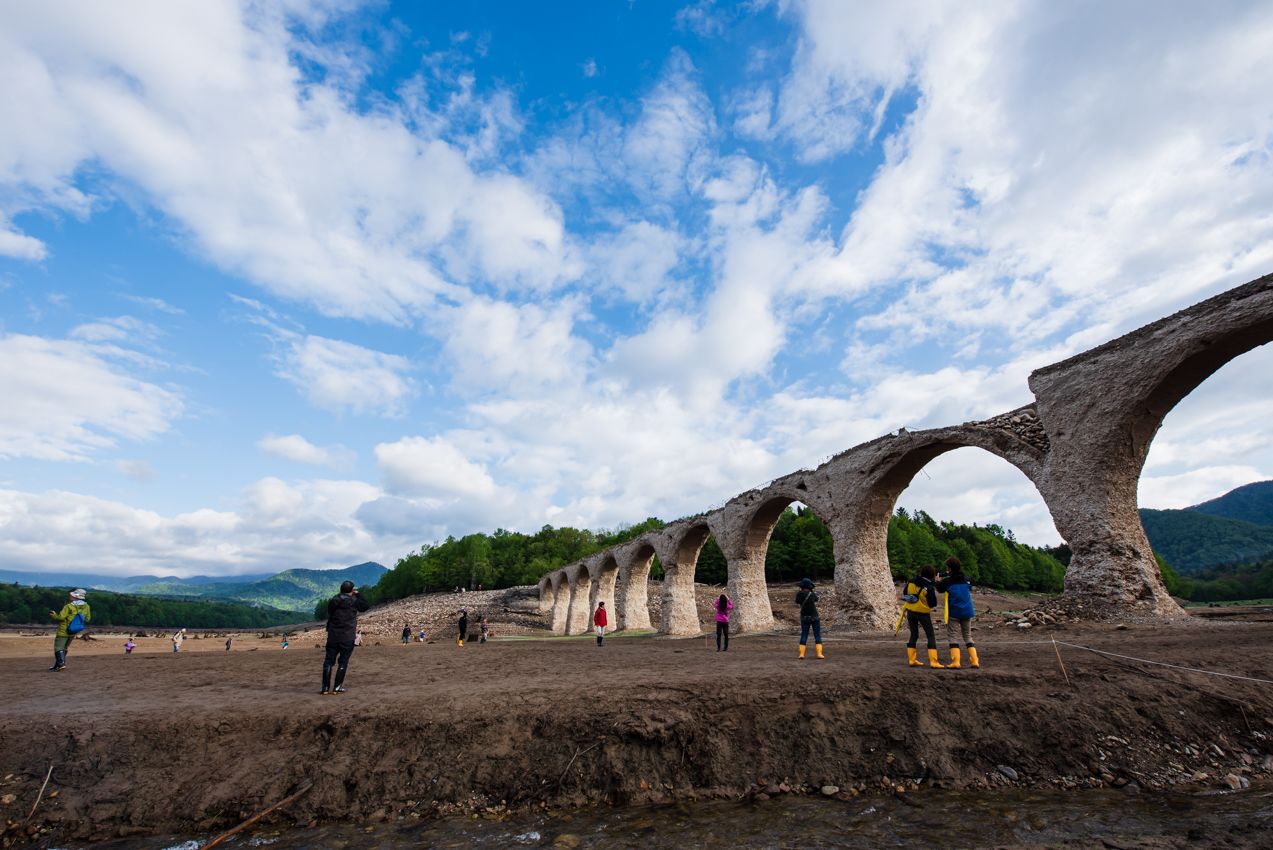 The bridge against the backdrop of the expansive Hokkaidō sky, May 2019. (© Iwasaki Ryōji)

Low Traffic for a Crumbling Relic in the COVID-19 Crisis

The forest road that leads to the Taushubetsu Bridge is not open to general traffic, but the Higashitaitetsu Nature Guide Center, a local nonprofit organization, conducts tours. Due to the COVID-19 pandemic, the number of participants has been reduced; there are so many requests from people around Japan to take part in the popular tour that some of them have to be turned down. 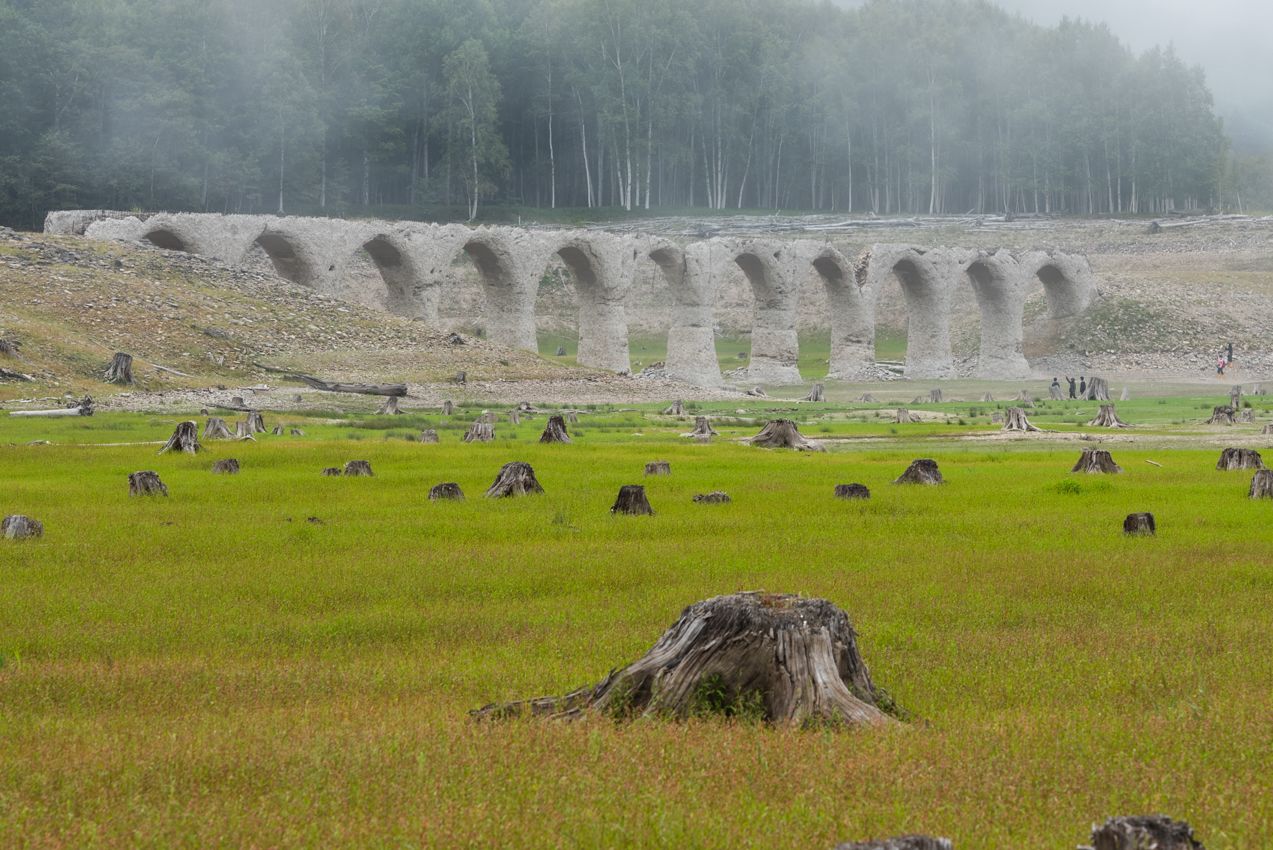 The view calls to mind ancient ruins; taken in May 2020. (© Iwasaki Ryōji)

The Taushubetsu Bridge has been deteriorating due to the effects of freezing every winter and other weathering, and parts of it collapsed three years ago and in April of this year. According to Iwasaki, it won’t be long before the bridge in its current form comes to an end. 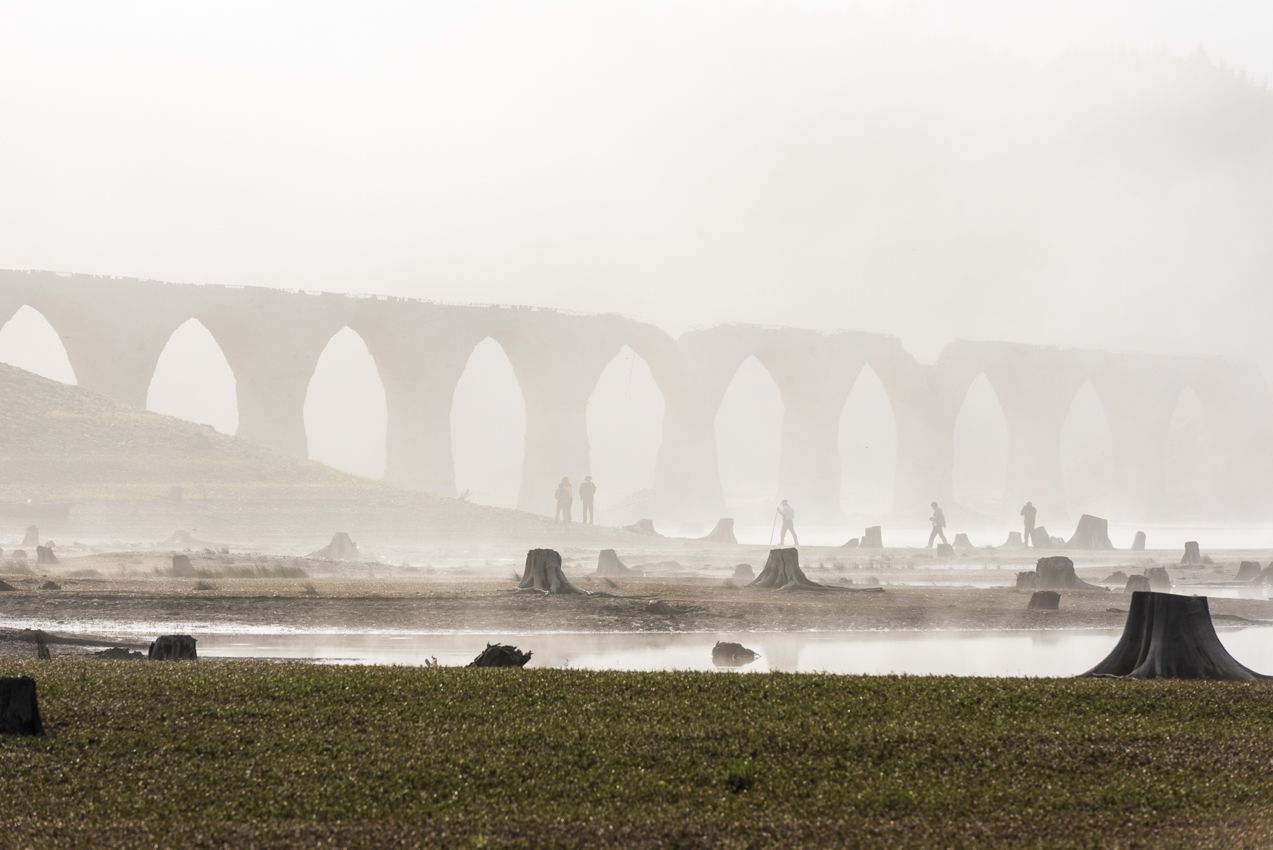