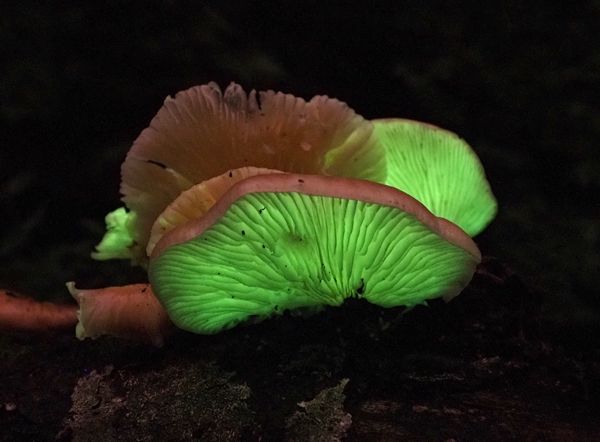 Similar in appearance to shiitake mushrooms, Omphalotus japonicus, commonly known as tsukiyotake, have started to cast their faint glow over the grounds of Mount Gomadan in the city of Tanabe, Wakayama Prefecture. The prefecture’s food and environmental health department has been advising people without knowledge of mushrooms not to pick any that they find in the forest or give them to others since it is difficult to identify poisonous mushrooms based on appearance.

The cap of the tsukiyotake mushroom often has a semicircular shape, with a diameter of over 20 centimeters on some of the larger ones. The gills on its underside glow. A variety of mushroom that easily causes food poisoning, it is often confused with edible fungi and mistakenly consumed in Japan. When ingested, it causes poisoning of the gastrointestinal system, resulting in such symptoms as vomiting, stomach cramps and diarrhea.

According to the park information center on the grounds, the mushroom grows on dead beech trees in areas at around 1,000 to 1,300 meters in elevation, and starts to appear from the rainy season into the fall, becoming most visible in the forest in September. The mushrooms sometimes appear in a layer pattern, and they can also grow together with other types of mushroom. When visitors’ eyes adjust to the darkness, they can see them glowing mysteriously with a soft greenish-white light. The younger ones glow the brightest.

(Originally published in Japanese on Kyōdoshi.com on July 25, 2021. Translated and edited by Nippon.com. Banner photo: Omphalotus japonicus glow faintly in the dark at Mount Gomadan in Tanabe, Wakayama Prefecture. All photos © Kii Mimpō.)