Clearing Snow from a National Treasure: The Five-Story Pagoda of Mount Haguro

The five-story Pagoda on Mount Haguro in Yamagata Prefecture is an ancient national treasure. Part of the upkeep of this venerable wooden structure is the annual removal of snow from its shingled roofs, a major undertaking that this year took place on January 30. 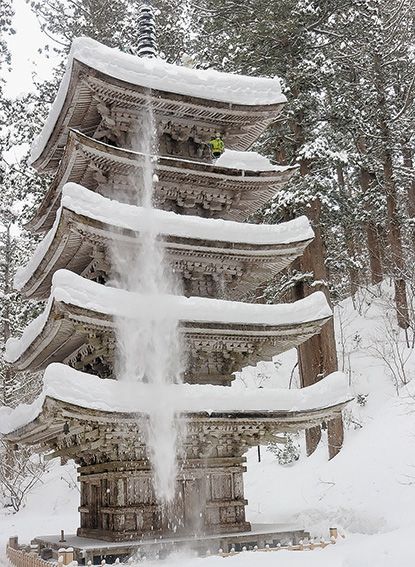 A fine spray of snow plunging from the top of the pagoda resembles a cascading waterfall. (© Shōnai Nippō)

The pagoda’s top-most level was covered with 1.3 meters of snow, almost 20 centimeters more than last year. Five workers from the Dewa Sanzan Shrine, which is responsible for looking after the pagoda, set about their task at 9 am. Wearing lifelines, they climbed to the top of the 22-meter pagoda and worked with shovels and snow scoops to clear the pagoda’s multiple roofs. As work progressed, the surrounding forest resounded with the thuds of the falling snow.

“We check the weather reports and wait for the coldest day to do the snow removal,” says Suzuki Eisaku, the Dewa Sanzan Shrine’s forestry technician. “It takes us all day to get the job done, but the pagoda is a national treasure, and we want to protect and preserve it as best we can.”

(Originally published in Japanese on Kyōdoshi.com on January 31, 2022. Translated and edited by Nippon.com.)