This year has been another devastating one for Iriomotejima’s population of critically endangered Iriomote cats. According to authorities in the town of Taketomi in Okinawa Prefecture, three of the native cats, which are found only on the small island, have been struck and killed by cars in 2022. The most recent incident involved an adult male that was found by a passerby along a section of prefectural highway in the Takana area of Iriomotejima on October 25. The discovery brought the total number of Iriomote cats hit by motor vehicles since 1978 to 100 animals, 92 of which were killed.

The downturn in visitors to Iriomotejima during the COVID-19 pandemic had proved beneficial to the wellbeing of the island’s population of Iriomote cats. Starting in December 2019, nearly 500 days passed without an accident. However, as tourism began to pick up, the number of incidents jumped from zero in 2020 to five in 2021. Combined with the figures from 2022, eight cats have been killed in accidents in the last two years. 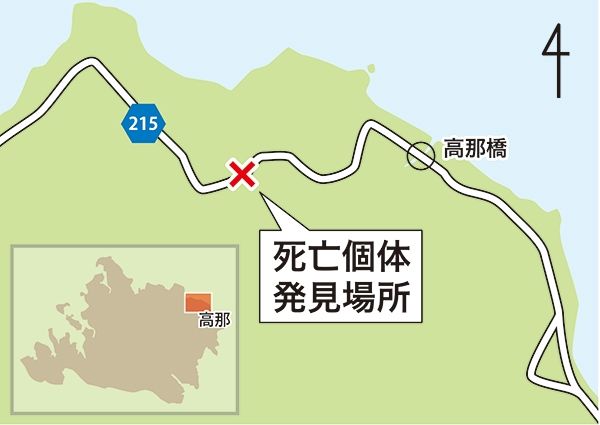 A map of Iriomotejima shows where an adult male Iriomote cat was struck and killed by a car on October 25, 2022.

The Iriomote Wildlife Conservation Center received a call late in the evening on October 25 about a dead animal on the road. A center employee collected the specimen, which was found near the center line of the highway. A preliminary investigation verified that it was a female Iriomote cat, which weighed 3.4 kilograms and measured 56 centimeters from its head to the base of its tail (78.7 centimeters from head to tail). The center will next send the body to the Joint Faculty of Veterinary Medicine at Kagoshima University, where specialists will look at its injuries to determine the exact cause of death and check for parasites and other indicators of its health prior to the accident.

The conservation center sets up signs along roads in areas where Iriomote cats have been sighted to warn drivers to watch for animals. It is also calling on motorists to pay heed of signs and be on the lookout especially at night as cats, particularly juveniles, are becoming more active, raising the risk of animals being injured or killed by passing cars. The center asks that anyone who hits a cat or who comes across an accident scene contact the facility immediately via its 24-hour hotline.

(Originally published in Japanese on Kyōdoshi.com on October 28, 2022. Translated and edited by Nippon.com. Banner photo: An Iriomote cat lies dead on the road in the Takana area of Iriomotejima on October 25, 2022, after being struck by a car. © Yaeyama Mainichi.)