Akimoto Tsukasa, a House of Representatives member of the governing Liberal Democratic Party, was arrested on December 25 by a Tokyo District Public Prosecutors Office special investigation unit. The case involves casino-related international corruption: A Chinese company hoping to be involved in building Japan’s newly approved integrated resorts, combining casinos with other hospitality and convention facilities, violated the Foreign Exchange and Foreign Trade Act by bringing a large amount of unauthorized cash into the country for payment to the Diet member. The incident has developed into a political scandal with the arrest of Akimoto, who until 2018 was the senior vice minister within the Cabinet in charge of overseeing the casino policy. The scandal is likely to deliver a heavy blow to the government of Prime Minister Abe Shinzō, which has touted integrated resorts as a centerpiece of its growth strategy.

Casinos are the primary focus of attention in the case of integrated resorts, since they had been previously banned under Japanese law. The ban was effectively lifted through the enactment of the IR Promotion Act in 2016, also known as the Casino Law. In 2018, the Liberal Democratic Party, Kōmeitō, and Nippon Ishin no Kai (the Japan Innovation Party) approved IR implementation legislation that allows casinos to be operated in three locations nationwide, with an entrance fee of ¥6,000 charged to Japanese visitors. Under the law, casino operators are obliged to pay 15% of their profits to the central government and another 15% to the local government. Many municipalities submitted bids for IR projects in the hope of securing additional tax revenue.

Japan is one of the few countries in the world that has not allowed casinos, making it the last major untapped casino market. The huge anticipated profits have attracted the interest of business entities from China, the United States, and other markets that are hoping to cash in on the opportunity. The enormous concessions that can arise from integrated resorts in Japan form the backdrop to this scandal.

Akimoto’s 2017 Visit to a Chinese Company

According to Japanese media reports, the Chinese company accused bribing Akimoto with ¥3 million in cash was 500.com, a Shenzhen-based online sports lottery operator. The special investigation unit arrested three people involved with the company who are suspected of bribing Akimoto, including two corporate advisors.

In December 2017, when Akimoto was the senior vice minister in charge of the government’s casino policy, he visited 500.com headquarters in Shenzhen with other lawmakers. In February 2018, Akimoto and his family visited the village of Rusutsu, Hokkaidō, where the company is thought to have aimed to develop an IR project. Akimoto had maintained close ties with village officials and company executives, who he had met for dinner meetings and other gatherings.

The special investigation unit launched its case with a suspected violation of the Foreign Exchange and Foreign Trade Act. The Chinese company is accused of bringing cash into Japan exceeding the legal limit of ¥1 million without notifying the authorities. This violation of the notification requirement is considered a “formal crime” that is usually subject to relatively light punishment. Such formal crimes are not usually the focus of the investigation unit, which investigates cases involving politicians, bureaucrats, and business leaders.

Another political corruption case that began with a violation of the Foreign Exchange Act was the famous Lockheed scandal that led to the arrest in 1976 of former Prime Minister Tanaka Kakuei for accepting bribes related to passenger plane orders from the United States. The Public Prosecutors Office at the time was criticized for arresting a former prime minister on the basis of violating the act in question. The special prosecutor in the case, Yoshinaga Yūsuke, known as the “god of prosecutors” (who later became an attorney general and died in 2013), talked to me about the arrest back in the autumn of 1983, one month after Tanaka was sentenced to prison for bribery and other criminal violations.

“Many people scolded me for the arrest of a former prime minister for violating that particular law, and some were quite angry,” he recalled with a laugh. “We had suspected that the 500 million yen brought in from the United States was used for bribes, but since we had to take the investigation one step at a time, we first arrested him for violating the Foreign Exchange and Foreign Trade Act. Of course, if it were merely a case involving that violation, there would have been no need for the special investigation unit to take up the case. Whenever politicians are arrested, though, it's assumed they will deny the charges, so prosecutors need to gather ample evidence in advance as they conduct their investigation.”

One key point of focus of the procutors inviestgating the alleged bribe of Akimoto, as well, is how much cash the Chinese company brought into Japan. 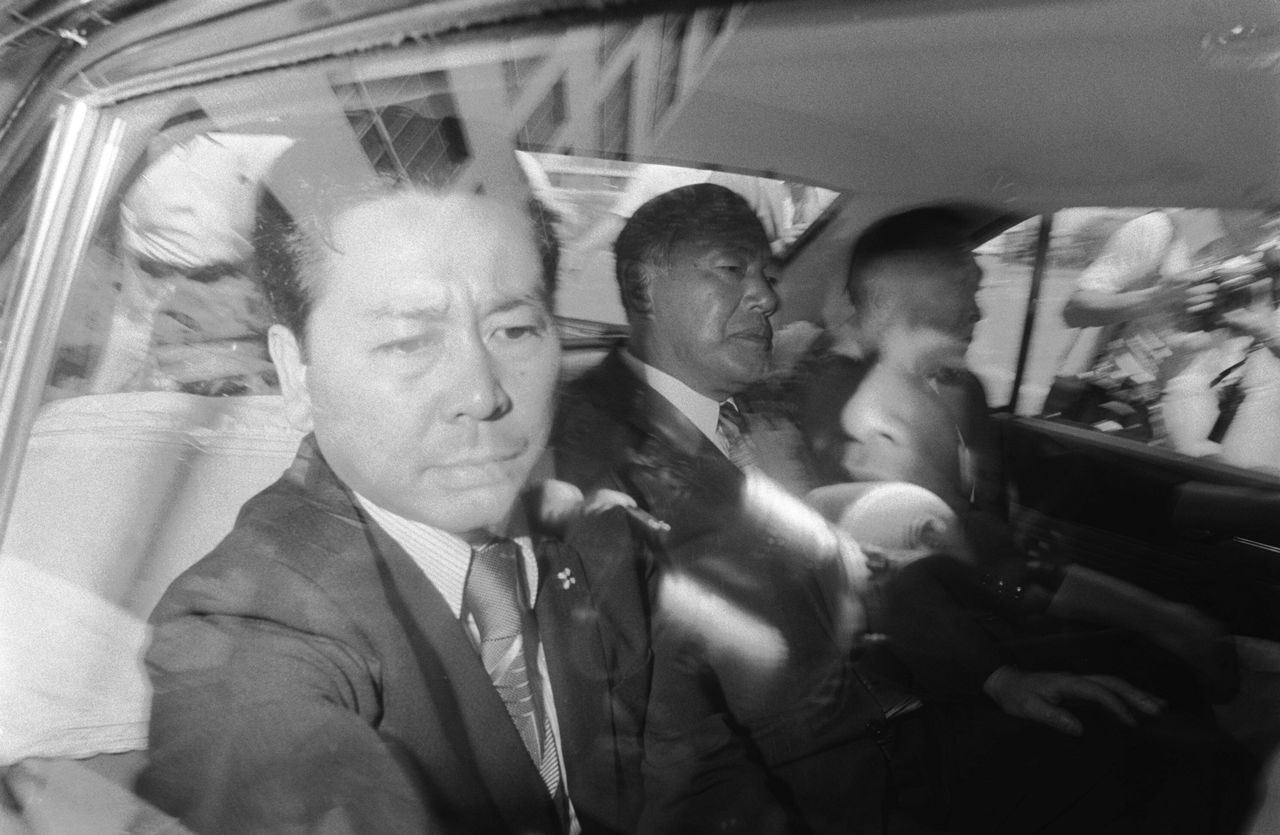 The casino bribery case is one of the few investigations occurring right before the New Year holiday. I remember reporting on the so-called Tokyo University of the Arts violin case, involving the special investigation unit’s arrest in 1981 of a leading Japanese violinist who was a music professor at the university. The professor was arrested on December 8 and indicated on December 28 for accepting bribes. He was released on bail that day, bringing the investigation to an end.

The special prosecutor at the time told me, “We want to take days off around the New Year like everyone else, and if we finish the investigation and it does not involve a violent criminal, we want to let the defendant go home too. It would not be untrue to say that the timing of the arrest of the professor in the case took into consideration how much time we would need to finish up before the holiday.”

In the current case, however, the special investigation unit will continue its investigation during the New Year holiday. Akimoto and his secretary and others were questioned regarding the case around the time the extraordinary session of the Diet ended on December 9, and on December 19 the investigators searched his parliamentary office and his political office in Kōtō, Tokyo.

The reason for the end-of-year investigation is that, under Article 50 of the Constitution, Diet members cannot be arrested during a Diet session. This forced the Tokyo District Public Prosecutors Office to make the arrest before the Diet convened again on January 20, 2020. 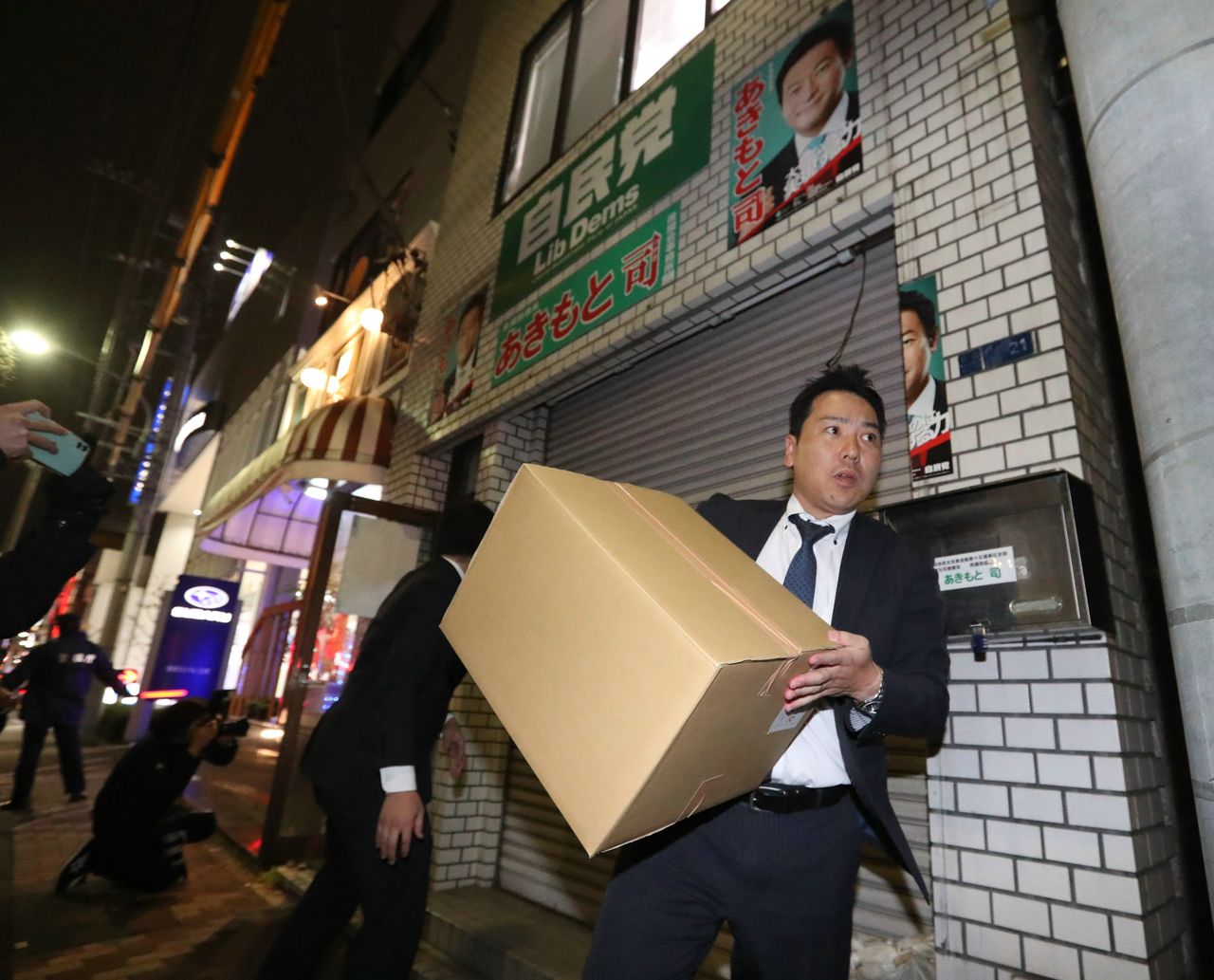 An official from the Tokyo District Public Prosecutors Office carries a box containing confiscated items from the office of House of Representatives member Akimoto Tsukasa in Kōtō, Tokyo, on December 19, 2019. (© Jiji)

A strange coincidence links cases pursued by the special investigation unit to the consumption tax and the enthronement of a new emperor. In January 1989, the new reign of Emperor Akihito ushered in the Heisei era, and in April of that year the consumption tax was introduced. Then, two months later, the cabinet of Prime Minister Takeshita Noboru collapsed in the Recruit scandal, leading to the indictment of the former chief cabinet secretary.

Similarly, in May 2019, the new Reiwa era began with the enthronement of Naruhito, followed by the increase of the consumption tax to 10% in October. And now, just months later, the casino scandal has emerged.

The question on everyone’s mind is whether the incident will end with the arrest of Akimoto, or expand further to bring even bigger fish into the net.

Morimoto Hiroshi, now head of the Tokyo District Public Prosecutors Office special investigation unit, has entered his third year in that position, an exceptionally long stretch for recent years. During his tenure, the unit has handled the case involving the arrest of former Nissan Chairman Carlos Ghosn. The current case marks the first time in nearly 10 years for a Diet member to be arrested by the unit.

The watchword of the special investigation unit has been to “never let a great evil sleep,” and many people are keeping a close eye on its investigation of the casino scandal.

(Originally published in Japanese on December 25, 2019. Banner photo: LDP member Akimoto Tsukasa [center] attends a plenary session of the House of Representatives on the last day of the extraordinary autumn session of the Diet on December 9, 2019. © Jiji.)