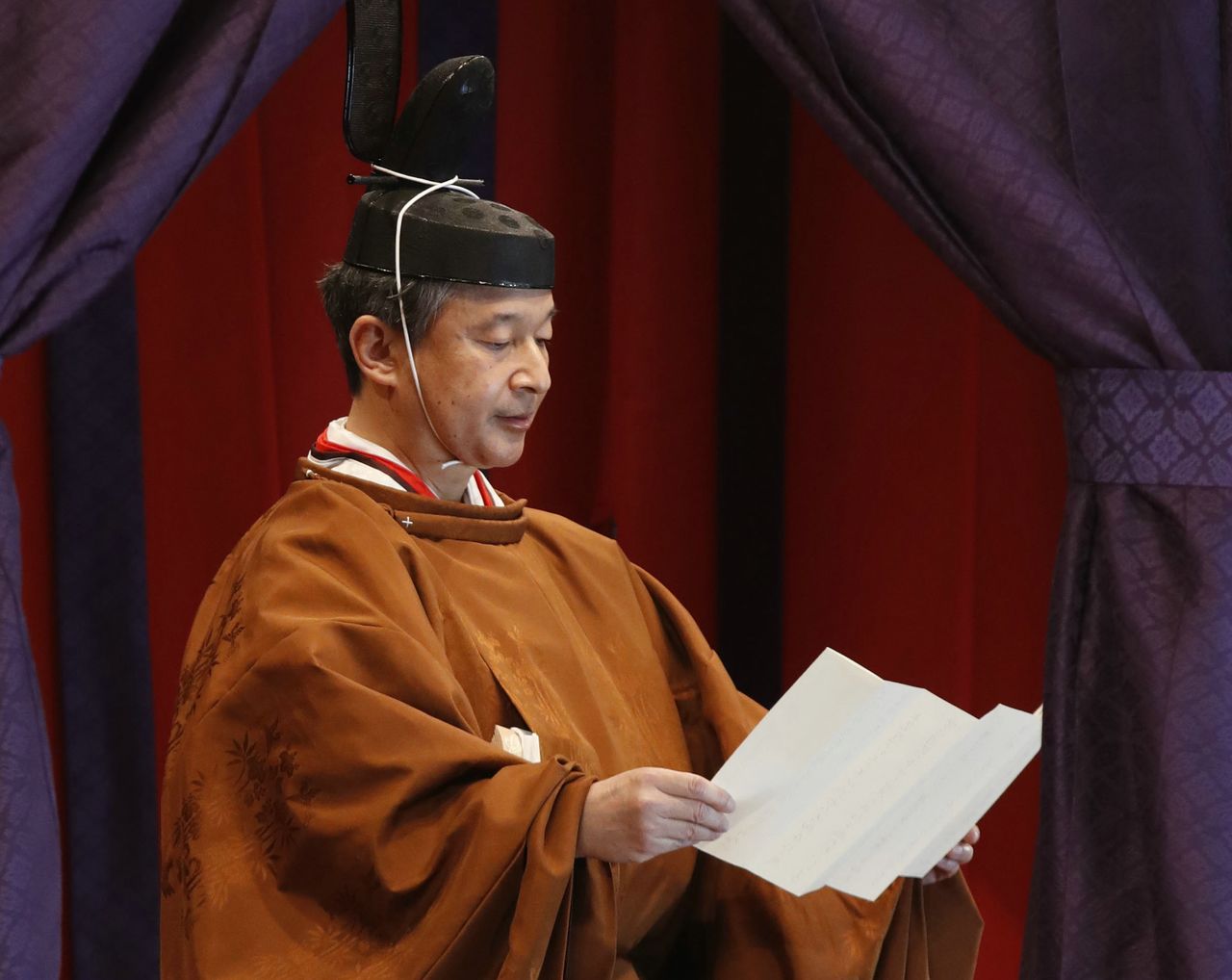 Emperor Naruhito reads his statement at the Sokuirei Seiden no Gi enthronement ceremony carried out in Tokyo on October 22, 2019. (© Jiji; pool photo)

On October 22, 2019, Emperor Naruhito and Empress Masako took part in the Sokuirei Seiden no Gi, the ceremony formally announcing to Japan and the entire world that they have ascended to the throne. Some 2,000 guests, including around 400 foreign heads of state, royals, and other dignitaries, gathered at the Imperial Palace in Tokyo to witness the ceremony.

The emperor mounted a special throne called the Takamikura, and the empress a slightly smaller throne known as the Michōdai. Attendants pulled back the curtains surrounding the thrones to formally reveal the imperial couple to the world.

Following this, Emperor Naruhito delivered a message proclaiming his enthronement. He departed from previous messages delivered upon this occasion with his inclusion of wishes for “the peace of the world” in addition to the happiness of the people of Japan. He then received a message from Prime Minister Abe Shinzō on behalf of the Japanese people, who led the assembled guests in three “Banzai!” cheers. Check the archived details of today’s ceremony at our live blog page.

Below we carry the English translation of the emperor’s statement, courtesy of the Imperial Household Agency.

Statement by His Majesty the Emperor

Having previously succeeded to the Imperial Throne in accordance with the Constitution of Japan and the Special Measures Law on the Imperial House Law. I now perform the Ceremony of Enthronement at the Seiden State Hall and proclaim my enthronement to those at home and abroad.

I sincerely hope that our country, through our people’s wisdom and unceasing efforts, achieves further development and contributes to the friendship and peace of the international community and the welfare and prosperity of humankind.

(Originally written in English. Banner photo: Emperor Naruhito reads his statement at the Sokuirei Seiden no Gi enthronement ceremony carried out in Tokyo on October 22, 2019.)