Society Jan 7, 2020
Carlos Ghosn’s dramatic exit from the country and the arrest of LDP lawmaker Akimoto Tsukasa on suspicion of receiving bribes were among the big stories in Japan in December 2019.

The Organization for Economic Cooperation and Development publishes the results of its Program for International Student Assessment. Japan drops from eighth position to fifteenth for reading, its lowest ever rank. The program rates the abilities of 15-year-old students in 79 countries and regions.

Nakamura Tetsu, a doctor working for the humanitarian aid group Peshawar-kai, is shot dead in Nangarhar, eastern Afghanistan. On December 11, his funeral is held in Fukuoka, Fukuoka Prefecture. 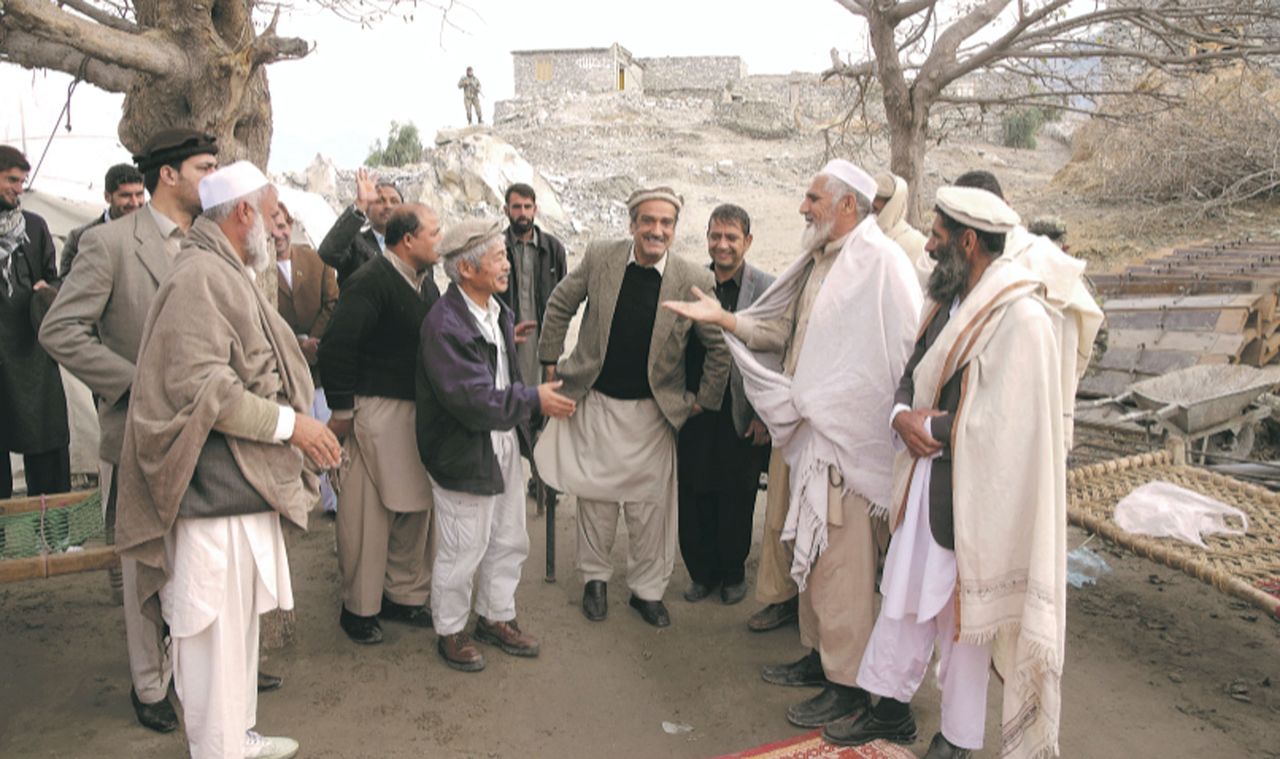 Nakamura Tetsu (center left) attends a ceremony to celebrate the opening of an irrigation canal established with support from Peshawar-kai in eastern Afghanistan on January 19, 2017. (Courtesy Peshawar-kai; © Jiji)

The Diet approves a trade agreement between Japan and the United States. It comes into effect on January 1, 2020.

Following the end of the Diet’s extraordinary session, Prime Minister Abe Shinzō states his strong desire to revise the Japanese Constitution before the end of his term as president of the ruling Liberal Democratic Party in September 2021.

Yoshino Akira is one of three recipients of the 2019 Nobel Prize in Chemistry at an award ceremony in Stockholm.

The members of Japan’s Rugby World Cup team take part in a parade in central Tokyo. The team reached the quarterfinal stage for the first time ever. 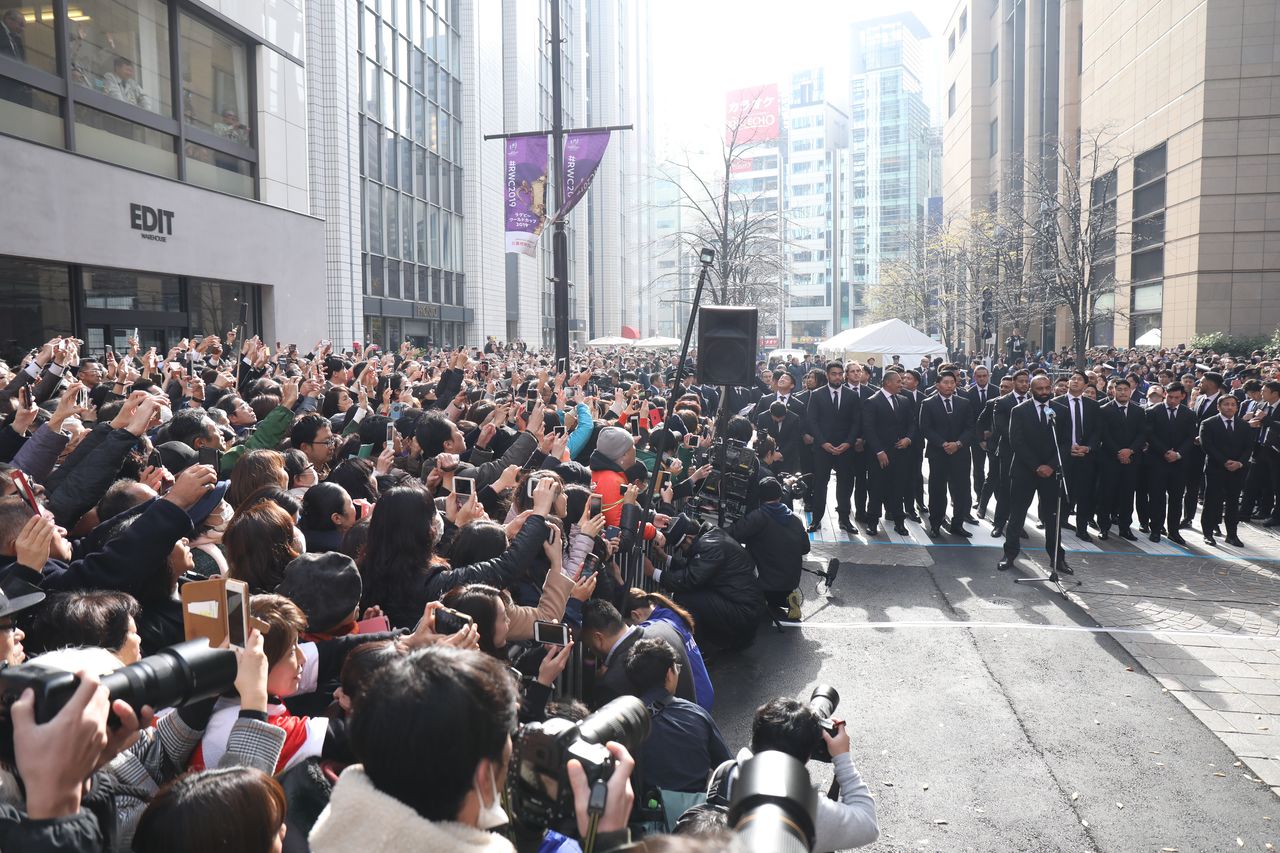 Michael Leitch (center right, at head of procession), the Japan captain, leads members of the national rugby team as they parade in Tokyo on December 11, 2019. (© Jiji)

A ceremony is held to mark the completion of the new National Stadium, the main venue for the 2020 Tokyo Olympic and Paralympic Games. On December 21, an event to celebrate the opening attracts 60,000 spectators.

Tokyo District Court sentences Kumazawa Hideaki to six years in prison for killing his son at his Tokyo home. The former vice minister of agriculture, forestry, and fisheries is released on bail on December 20.

Minister of Education, Culture, Sports, Science, and Technology Hagiuda Kōichi announces that he has dropped plans to introduce written sections for Japanese and mathematics in the new Common Test for University Admissions during fiscal 2020.

An external group of lawyers releases its report on irregularities in the sale of insurance products by Japan Post Insurance, finding 12,836 contracts that may have violated the law or internal rules during the sales process. The group identifies 670 contracts as definite violations of the rules.

Minister of Internal Affairs and Communications Takaichi Sanae replaces Vice Minister Suzuki Shigeki after he leaked information to the Japan Post group regarding its punishment for insurance sales irregularities.

At a cabinet meeting, the government adopts a budget plan for fiscal 2020 stipulating general-account spending of a record ¥102.7 trillion. The figure is up 1.2% from the previous year, topping ¥100 trillion for the second consecutive year.

Prime Minister Abe meets with Chinese Premier Li Keqiang and South Korean President Moon Jae-in in Chengdu, China. The three leaders affirm their support for talks between the United States and North Korea targeting denuclearization of the Korean peninsula. Prime Minister Abe also talks alone with President Moon, and they agree that they should solve the issues between their two countries through dialogue.

The Ministry of Health, Labor, and Welfare announces its estimate that 864,000 Japanese babies were born in 2019, which would be the first time this figure has fallen below 900,000 since statistics were first compiled.

Tokyo prosecutors arrest lawmaker Akimoto Tsukasa on suspicion of accepting bribes from a Chinese company that planned to open a casino resort in Japan. Akimoto formerly served as state minister in charge of casino resorts at the Cabinet Office.

The cabinet decides to deploy a Marine Self-Defense Forces destroyer and patrol aircraft to the Middle East to ensure safe navigation. The decision makes uses of a clause that allows dispatch without parliamentary consent for purposes of research and study, even though the mission is to protect Japanese commercial vessels.

Former Nissan Chairman Carlos Ghosn enters Lebanon after leaving Japan, where he faced charges including violation of the Financial Instruments and Exchange Act. Under the terms of his bail, he was not allowed to leave the country.