Society Dec 1, 2020
Among the major news stories in Japan in November 2020, a third wave of COVID-19 infections prompts a partial suspension of the Go To Travel campaign.

In a referendum, voters narrowly reject a proposal to scrap the municipality of Osaka and replace it with four special wards within a metropolitan district. The plan was previously rejected in a 2015 referendum. Nippon Ishin no Kai leader and Osaka Mayor Matsui Ichirō takes responsibility for the defeat and announces his retirement from politics at the end of his term as mayor in April 2023.

The first outbreak in 34 months in Japan of highly pathogenic avian influenza is confirmed at a farm in Mitoyo, Kagawa Prefecture. As of November 25, a total of 10 outbreaks have taken place at farms in Kagawa, Fukuoka, and Hyōgo Prefectures.

The rise of Crown Prince Fumihito to first in line to the throne is formally proclaimed in ceremonies at the Imperial Palace in Tokyo. 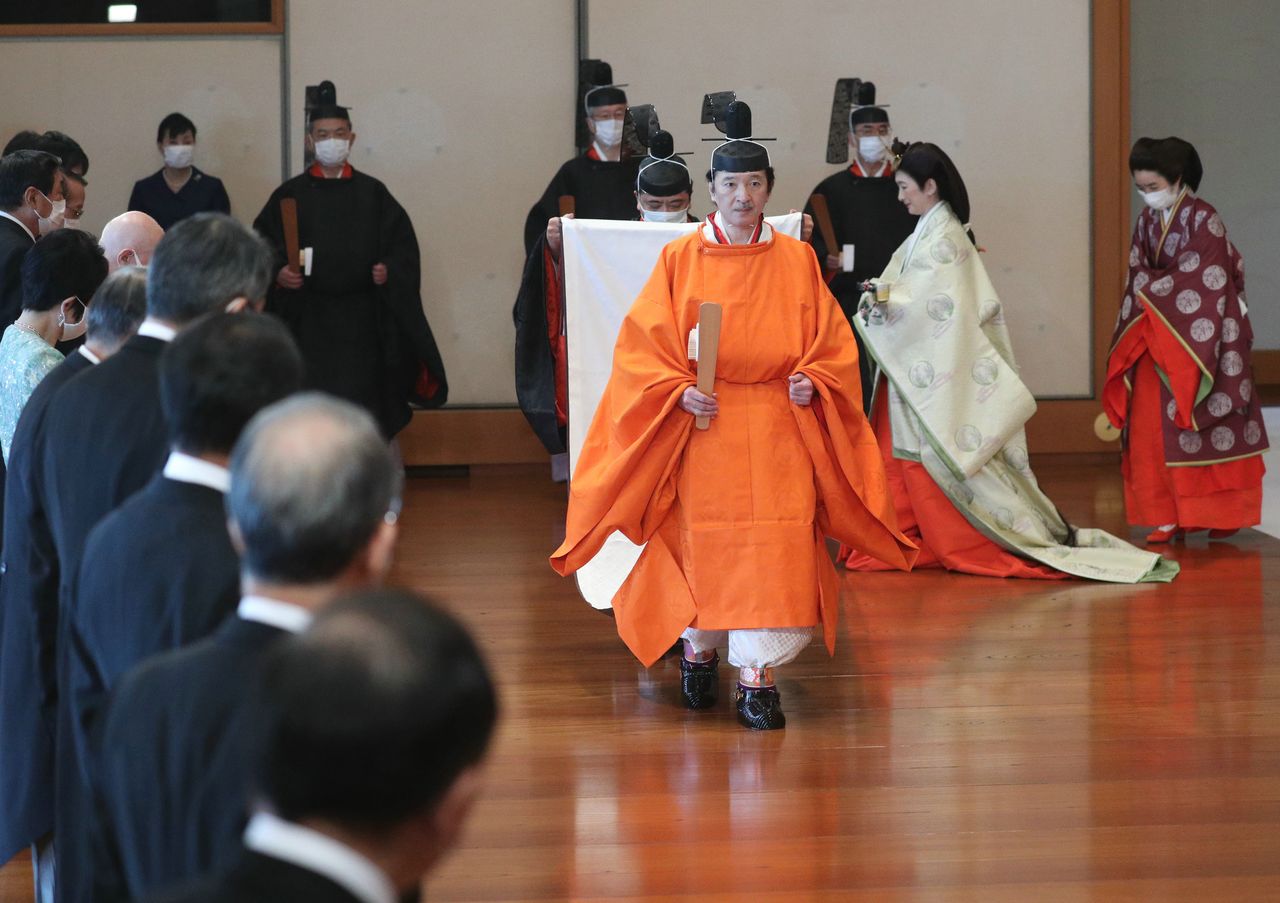 Crown Prince Fumihito is formally declared first in line to the throne in front of Emperor Naruhito at the Imperial Palace in Tokyo on November 8, 2020. (© Jiji)

Miyagi Governor Murai Yoshihiro announces his approval of the restart of the number 2 reactor at Onagawa Nuclear Plant in Ishimaki, Miyagi Prefecture. The plant, managed by Tōhoku Electric Power, was shut down after the 2011 Great East Japan Earthquake.

Prime Minister Suga Yoshihide has his first telephone conversation with US President-elect Joe Biden. The two confirm continued efforts to strengthen the alliance between their countries.

Koshiba Masatoshi, who won the 2002 Nobel Prize in Physics for the detection of cosmic neutrinos, dies in Tokyo at the age of 94. 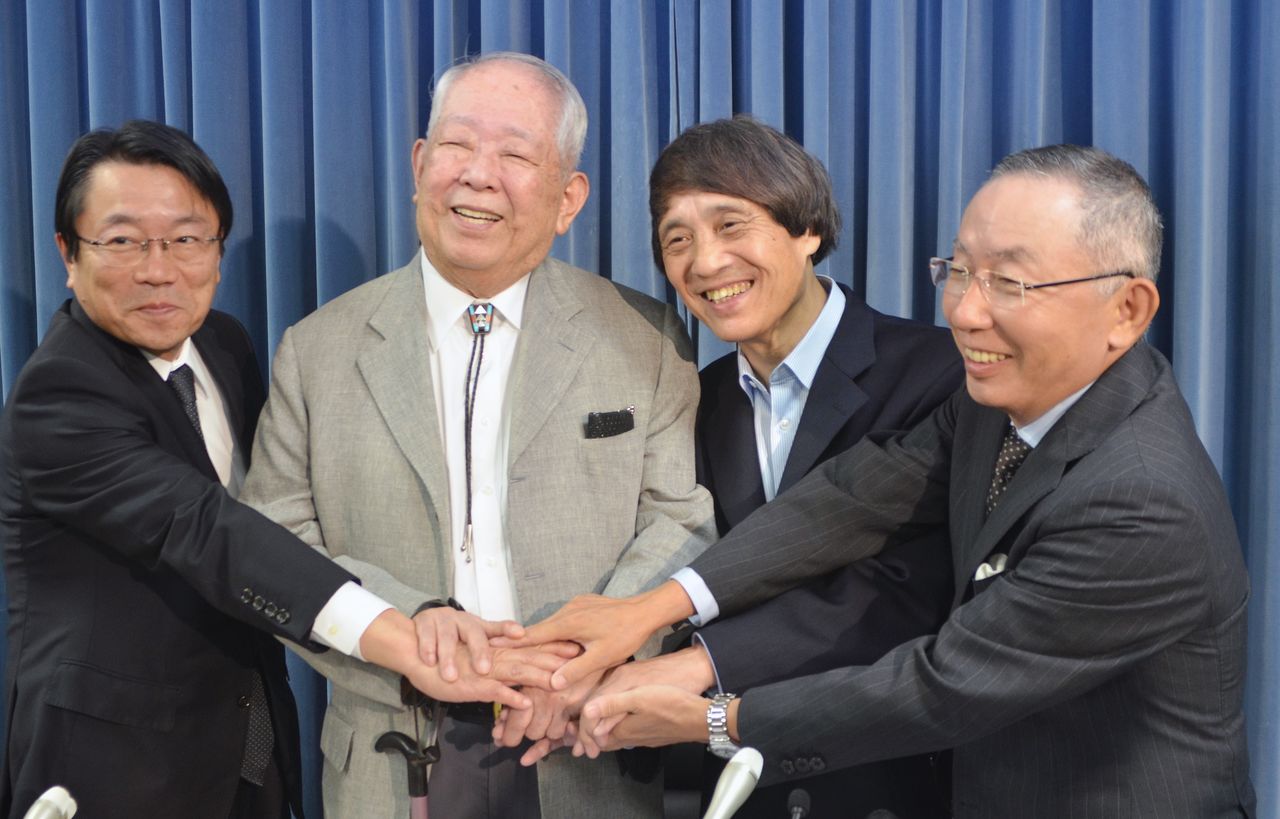 Koshiba Masatoshi (second from left) with others at the announcement in Tokyo in May 2011 of a scholarship foundation for children orphaned by the Great East Japan Earthquake. (© Jiji)

Kabuki actor Sakata Tōjūrō IV, who was a designated national living treasure, dies at the age of 88.

Japan, China, South Korea, Australia, New Zealand, and the 10 member states of the Association of Southeast Asian Nations agree to join the Regional Comprehensive Economic Partnership, which will abolish tariffs for 91% of products.

International Olympic Committee President Thomas Bach comes to Tokyo. On November 16, he meets separately with Prime Minister Suga and Tokyo Governor Koike Yuriko to confirm the goal of holding the postponed Olympic and Paralympic Games in the Japanese capital in summer 2021.

Noguchi Sōichi is among four astronauts who take off in the Crew Dragon capsule from the Kennedy Space Center in Florida, the United States, bound for the International Space Station.

The Cabinet Office releases its preliminary GDP figures for the third quarter of 2020. The economy grows by 5.0%, or 21.4% on an annualized basis

The Nuclear Waste Management Organization of Japan begins initial surveys in the two Hokkaidō municipalities of Suttsu and Kamoenai to see if they are suitable candidates to host a facility for final disposal of high-level radioactive waste.

The Agency for Cultural Affairs announces that a UNESCO panel has recommended “traditional skills, techniques and knowledge for the conservation and transmission of wooden architecture in Japan” for registration on its list of Intangible Cultural Heritage.

The Tokyo Metropolitan Government raises its COVID-19 alert to the highest level on its four-tier system. On November 26, it decides to once again request establishments serving alcohol to implement shortened working hours.

The government decides to partially suspend the Go To Travel campaign for stimulating demand, due to an increase in COVID-19 infections. On November 24, it removes the cities of Osaka and Sapporo from the campaign.

Tokyo prosecutors question a secretary to former Prime Minister Abe Shinzō over dinner parties held by his supporters the night before an annual party for viewing cherry blossoms hosted by Abe.

Prime Minister Suga holds talks with Chinese State Councillor and Foreign Minister Wang Yi in Tokyo. Suga shows concern about intrusions of China’s vessels into waters around the Senkaku Islands and its tightening control of Hong Kong, calling on it to take positive action. He also stresses the importance of stable relations between Japan and China.

Informed sources indicate that Prime Minister Suga is highly unlikely to call a snap election of the House of Representatives in January 2020. Suga is believed to be concentrating on containing the COVID-19 pandemic and reviving the economy.

At a press conference ahead of his fifty-fifth birthday, Crown Prince Fumihito expresses his approval of his daughter Princess Mako’s marriage to Komuro Kei.