Society Jun 1, 2022
Japan’s leading news stories in May 2022 include a visit to the country by US President Joe Biden and the fiftieth anniversary of the reversion of Okinawa to Japanese control.

Ivica Osim, the former manager of the Japan men’s soccer team, dies in Graz, Austria, at the age of 80. 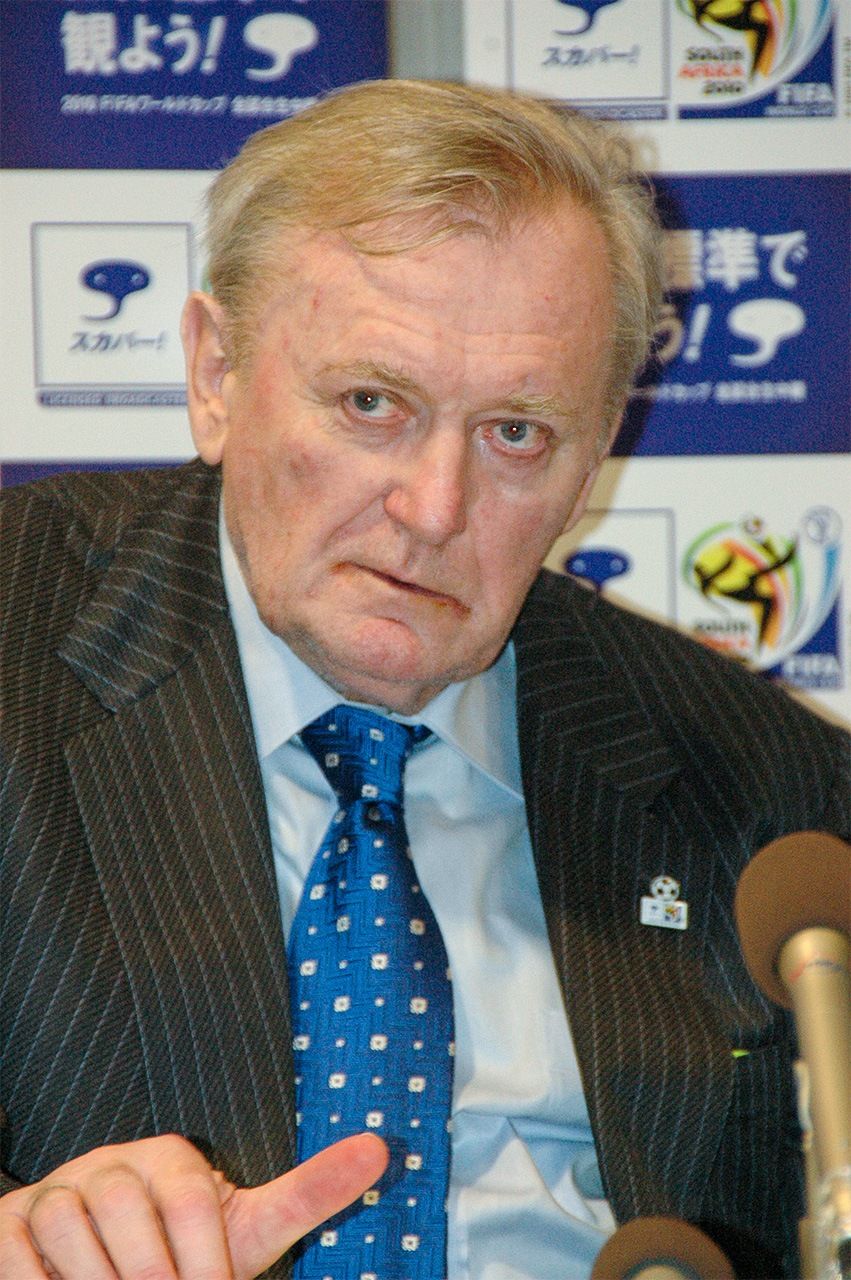 Japan Coast Guard officers raid the offices of the operator of Kazu 1, which sank with 24 passengers and 2 crew off the Shiretoko Peninsula in Hokkaidō in April, seeking evidence of negligence.

Prime Minister Kishida meets with UK Prime Minister Boris Johnson in London. They reach broad agreement on a reciprocal access agreement to serve as a legal basis for visits between Japan’s Self-Defense Forces and the British military.

The South Korean military’s Joint Chiefs of Staff reports the firing by North Korea of a suspected short-range submarine-launched ballistic missile toward the Sea of Japan. On May 12, North Korea launches three missiles toward the same body of water, all falling into waters outside Japan’s exclusive economic zone, according to Japan’s Ministry of Defense. On May 25, North Korea fires two more missiles in the direction of the Sea of Japan. While they fall outside Japan’s EEZ, one is suspected of being an intercontinental ballistic missile.

An economic security law is enacted in the Japanese Diet.

An international project involving the National Astronomical Observatory of Japan announces that it has succeeded in capturing an image of the black hole at the center of the Milky Way using the Event Horizon Telescope.

The total number of COVID-19 fatalities in Japan to date reaches 30,000.

The country marks 50 years since Okinawa returned to Japanese sovereignty with events in Tokyo and Okinawa. 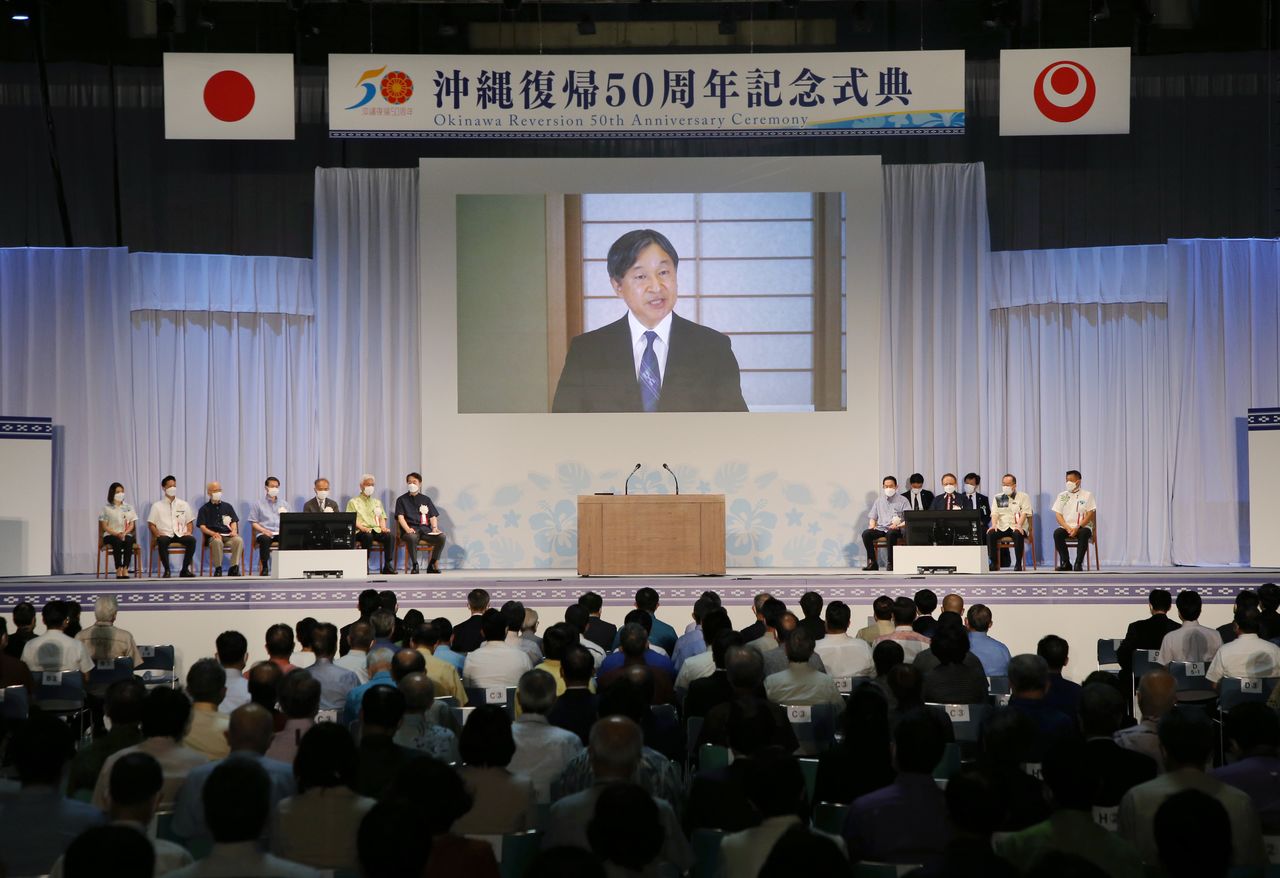 Emperor Naruhito, participating remotely, speaks at an event in Okinawa on May 15, 2022, marking the fiftieth anniversary of the reversion of the islands to Japanese control. (© Jiji)

The Tokyo District Court rules that the Tokyo Metropolitan Government’s order under special COVID-19 legislation that restaurants and bars should shorten their business hours was illegal. However, it does not award damages to the Global Dining restaurant chain, which brought the case, stating that Tokyo Governor Koike Yuriko was not negligent.

Yamaguchi prefectural police arrest a 24-year-old man on suspicion of fraud after he refuses to return ¥46.3 million in COVID-19 relief funds he received due to an error by authorities in the town of Abu in the prefecture.

The Cabinet Office releases its preliminary GDP figures for the January–March quarter of 2022, showing a 0.2% drop from the previous quarter, or an annualized 1.0% contraction, returning to negative growth after the positive final quarter of 2021.

The Tokyo District Court orders Juntendō University to pay ¥8.05 million in compensation after it adjusted its medical school entrance examination criteria to discriminate against women and second-time candidates.

The consumer price index for April, published by the Ministry of Internal Affairs and Communications, rises 2.1% year on year to 101.4; the index excludes fresh food, which is subject to large price fluctuations. This is the eighth consecutive monthly rise and the first time for the index to increase by more than 2% in over 7 years.

Prime Minister Kishida meets with US President Joe Biden, who arrived in Tokyo on the previous day. In a joint statement, the two leaders express their agreement on strengthening the deterrence and response capabilities of the Japan-US alliance, given Russia’s invasion of Ukraine and concerns over Chinese actions. Kishida also announces that next year’s Group of Seven summit will be held in Hiroshima.

Prime Minister Kishida hosts a meeting of Quad leaders at the Kantei. The leaders agree that they strongly oppose any coercive, provocative, or unilateral actions that seek to change the status quo in the Indo-Pacific region. 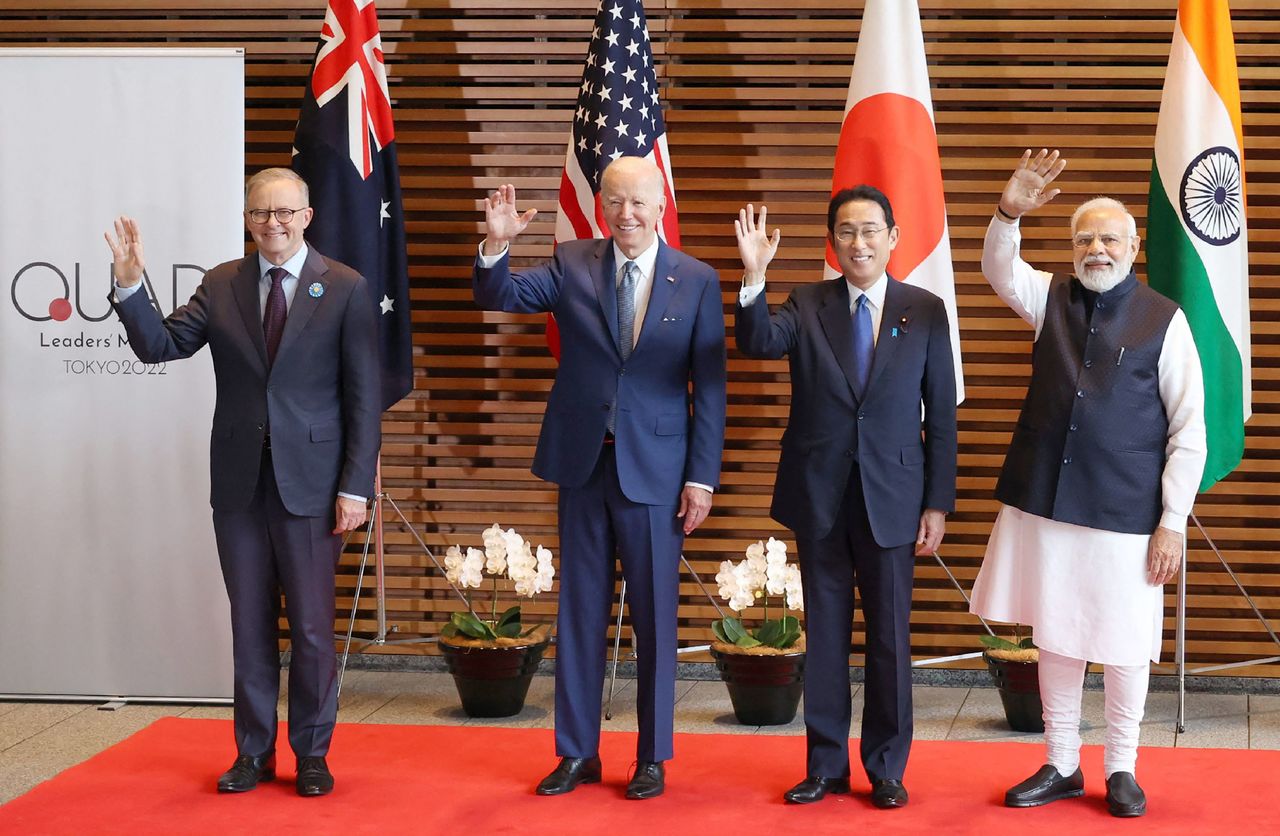 The Japan Coast Guard announces that Kazu 1 sank again during salvage efforts. On May 26, it is returned to the surface, but there is no trace of those passengers still missing. 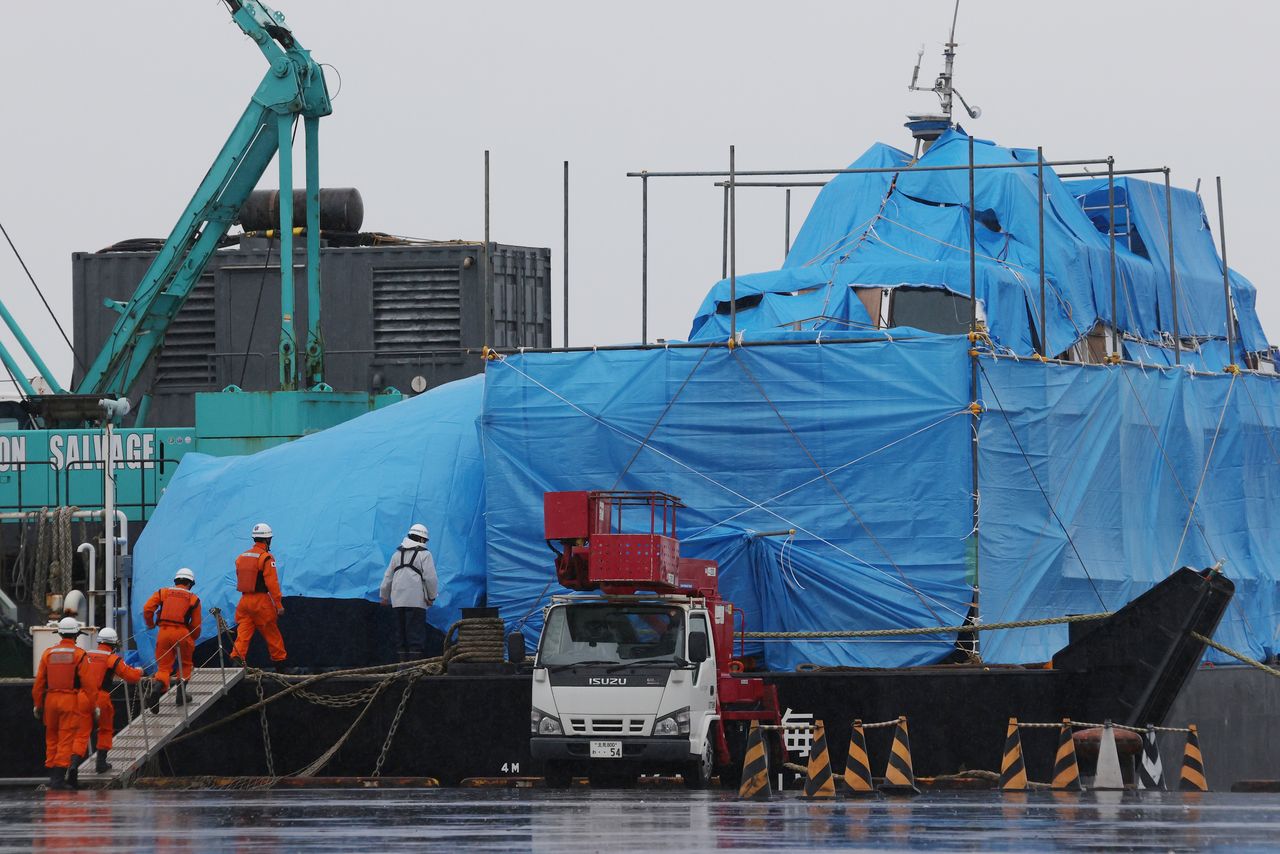 A Japan Coast Guard salvage team (bottom left) participating in efforts to seek missing passengers from the Kazu 1 in Abashiri, Hokkaidō, on May 28, 2022. (© Jiji)

The Supreme Court rules for the first time that it is unconstitutional that Japanese people living overseas cannot review the performances of the court’s judges. It orders payments to plaintiffs as the Diet is judged to have delayed legislative action unnecessarily.

The Tokyo District Court finds former Minister of Agriculture, Forestry, and Fisheries Yoshikawa Takamori guilty of taking ¥5 million in bribes from egg producer Akita Foods during his time in office. He receives a prison sentence of two years and six months, suspended for four years, and is fined ¥5 million.

Shigenobu Fusako, former leader of the Japanese Red Army, is released from prison. She was convicted for actions including her involvement in the 1974 attack on the French embassy in the Hague, the Netherlands. 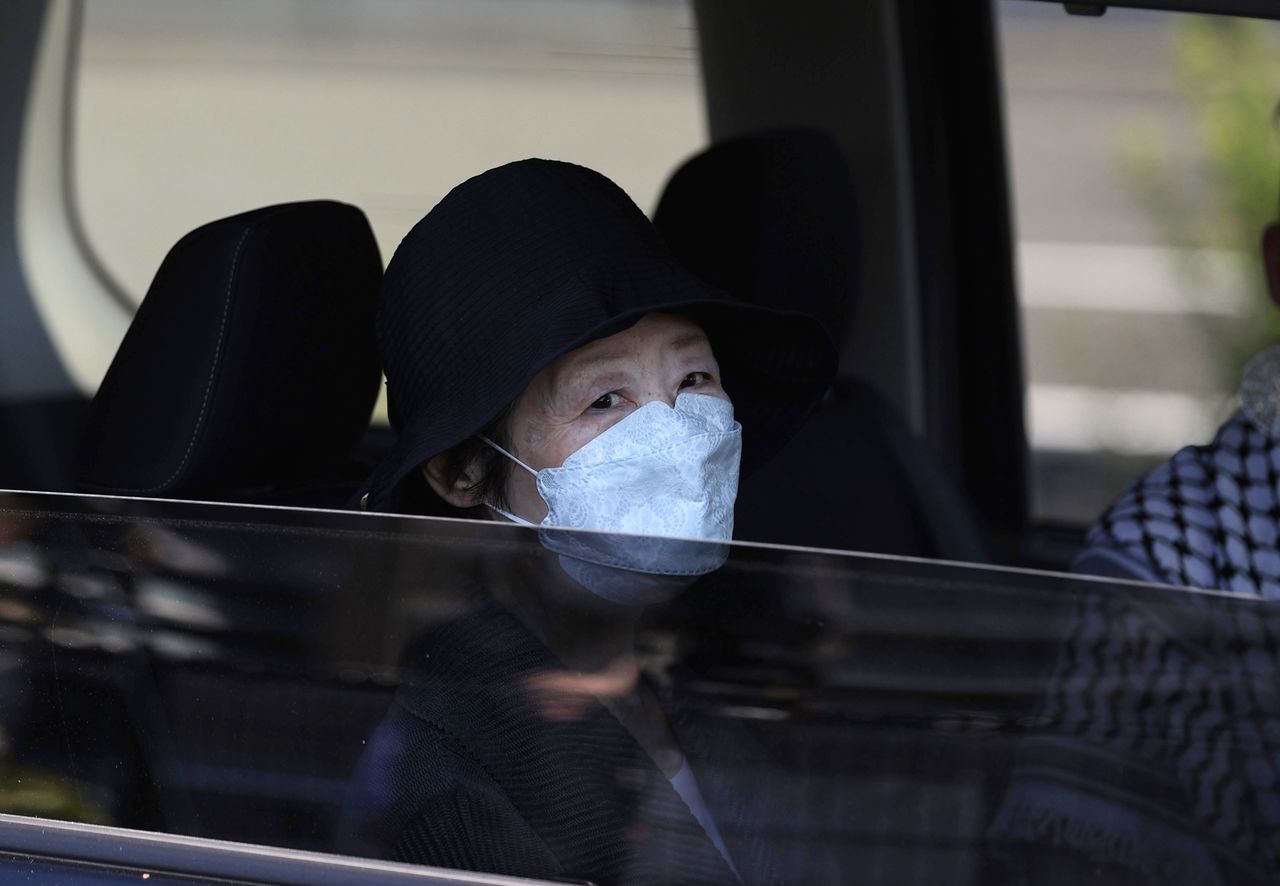 The Sapporo District Court rules against a restart at Hokkaidō Electric’s Tomari Nuclear Power Plant, due to safety concerns, in a suit brought by 1,200 Hokkaidō residents. It rejects the call for decommissioning the plant.

(Originally published in Japanese. Banner photo: Prime Minister Kishida Fumio, at right, and and US President Joe Biden meet in Tokyo on May 23, 2022. © Jiji.)