Prime Minister Kishida Fumio becomes the first Japanese leader to attend a review conference of the Treaty on the Nonproliferation of Nuclear Weapons, where he gives a speech presenting his Hiroshima Action Plan for a world without nuclear weapons.

The Ministry of Internal Affairs and Communications issues KDDI and its subsidiary Okinawa Cellular with administrative guidance after the company’s major network disruption from the morning of July 2.

Six prefectures in Tōhoku and Hokuriku experience record rainfall from August 3 to 4, leading to the flooding of 17 rivers and temporary evacuation orders for 540,000 residents.

Issey Miyake, a fashion designer and recipient of the Order of Culture, dies at the age of 84.

Hiroshima marks 77 years since the city’s atomic bombing with a ceremony in the Peace Memorial Park. Prime Minister Kishida and United Nations Secretary-General António Guterres are among the attendees. On August 9, Nagasaki holds a ceremony on the anniversary of its bombing.

Ohtani Shōhei of the Los Angeles Angels becomes the first Major League baseball player to achieve double-digit wins and home runs in a single season since Babe Ruth in 1918.

The Ministry of Internal Affairs and Communications announces that the number of Japanese people living in Japan on January 1, 2022, was 123,223,561, down a record 619,140 (0.50%) year on year. This is the thirteenth year of population decline. The Japanese population of the Tokyo area (including the prefectures of Tokyo, Kanagawa, Saitama, and Chiba), dropped to 35,610,115, its first fall since statistics were first collated in 1975. 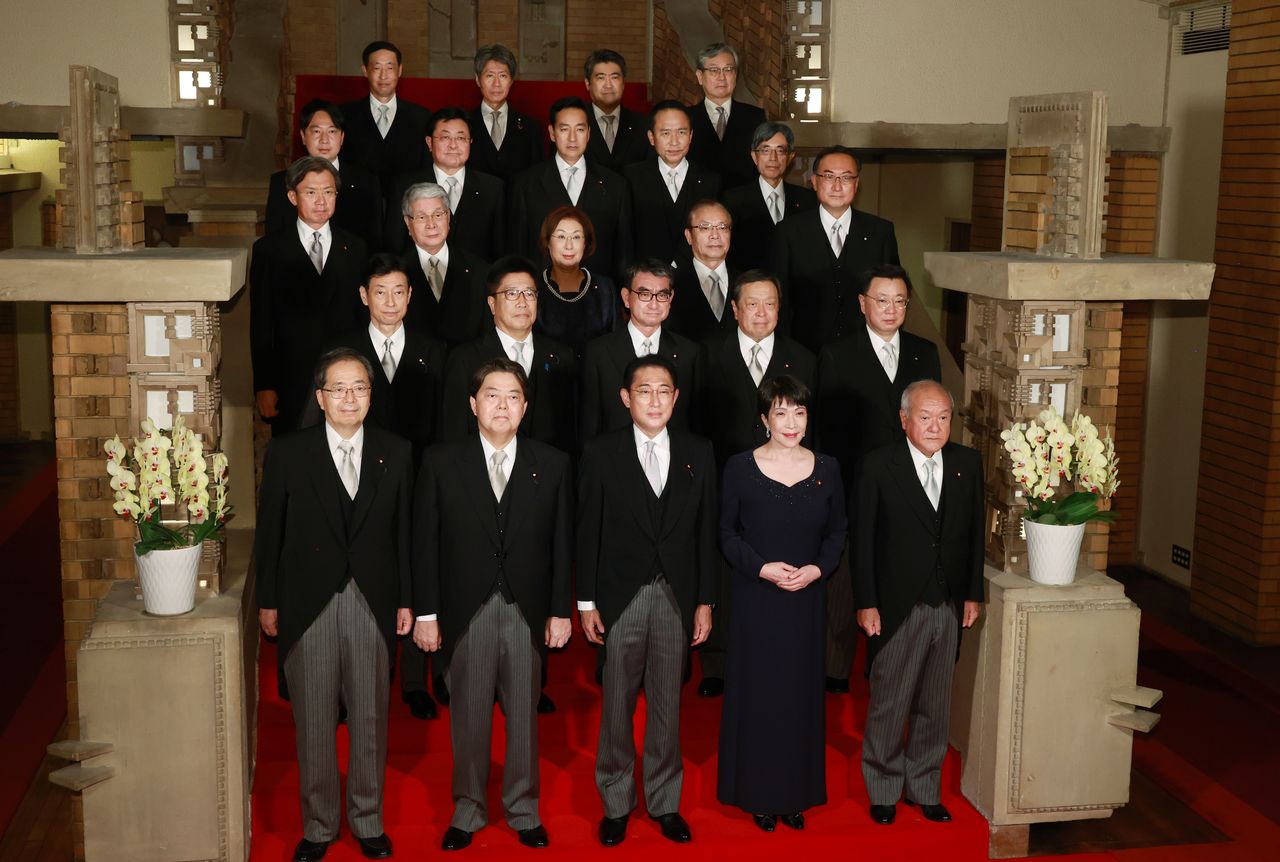 Prime Minister Kishida Fumio, at front center, poses for a commemorative photo with the members of his new cabinet at the Kantei in Tokyo on August 10, 2022. (© Jiji)

Mori Hanae, a fashion designer who was the first Japanese person to become an official member of La Chambre Syndicale de la Couture Parisienne in Paris and received the Order of Culture in 1996, dies at the age of 96. 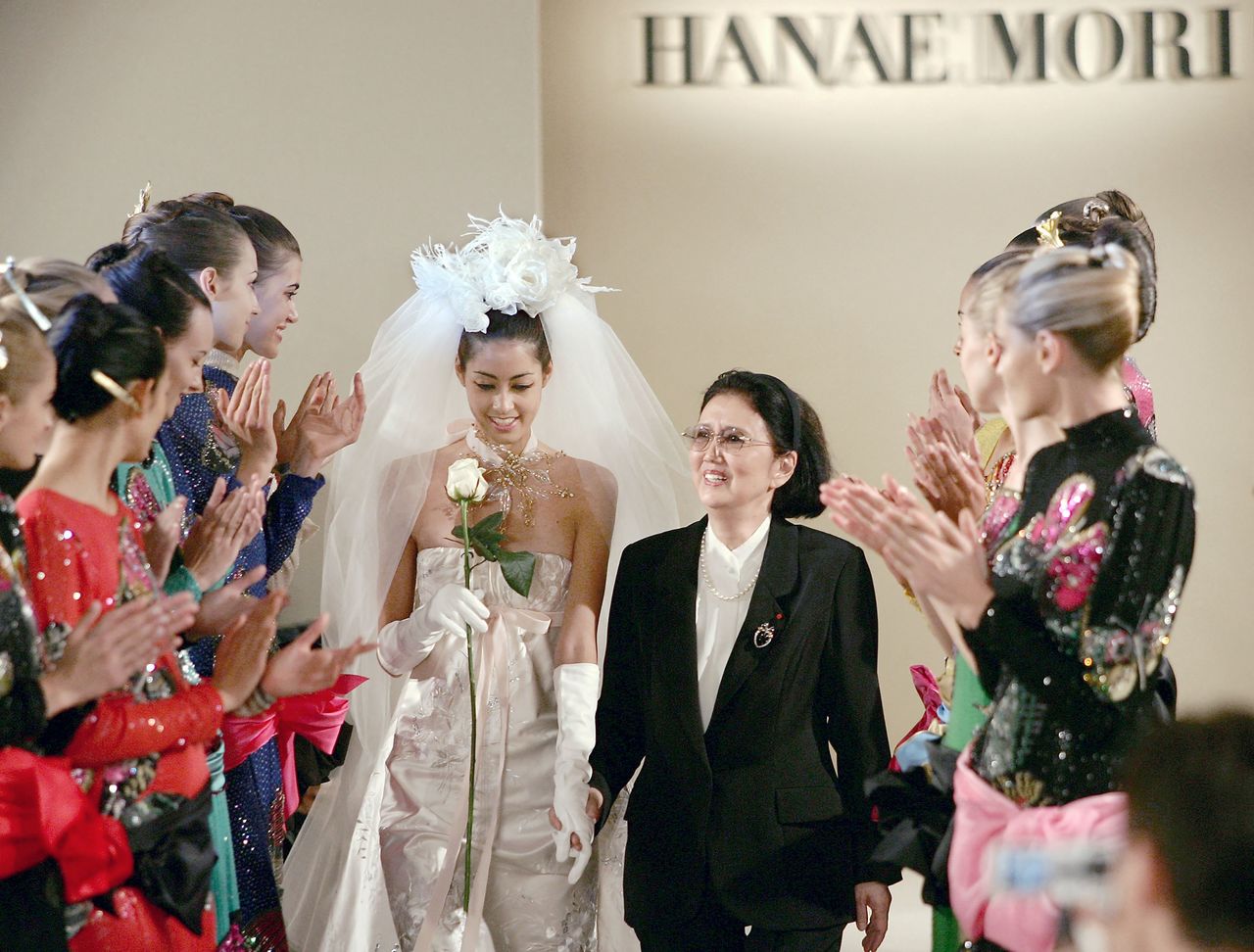 Mori Hanae (center right) holding the hand of her granddaughter Mori Izumi at a show for her autumn/winter haute couture collection in Paris on July 7, 2004. (© AFP/Jiji)

Baba Saki wins the US Women’s Amateur Golf Championship at the age of 17, becoming the second Japanese winner of the tournament after Hattori Michiko in 1985.

An official ceremony is held in Tokyo to mark 77 years since the end of World War II. For the third successive year, there is a reduced number of participants as a measure to prevent COVID-19 infections.

Prime Minister Kishida tests positive for COVID-19. He continues to work remotely before returning to appear in person at press conferences from August 31.

Hino Motors halts shipments of its Dutro light trucks after further evidence emerges of tampering with emissions and fuel-efficiency data.

The number of daily COVID-19 fatalities in Japan reaches a new record of 343.

Sendai Ikuei Gakuen High School wins the National High School Baseball Championship, becoming the first team from Tōhoku to do so, either in spring or summer. 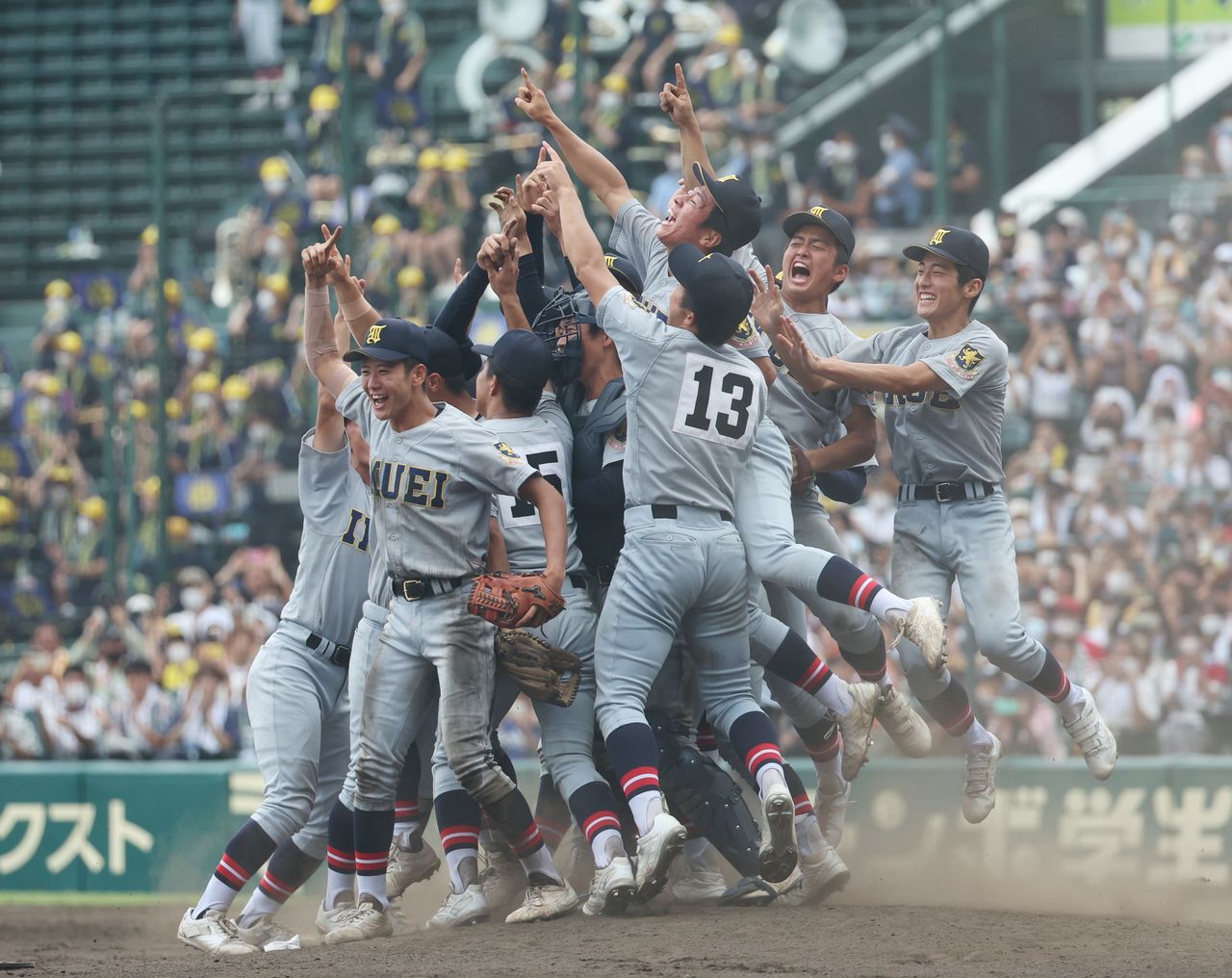 Business leader Inamori Kazuo, the founder of Kyocera and KDDI, dies at the age of 90. 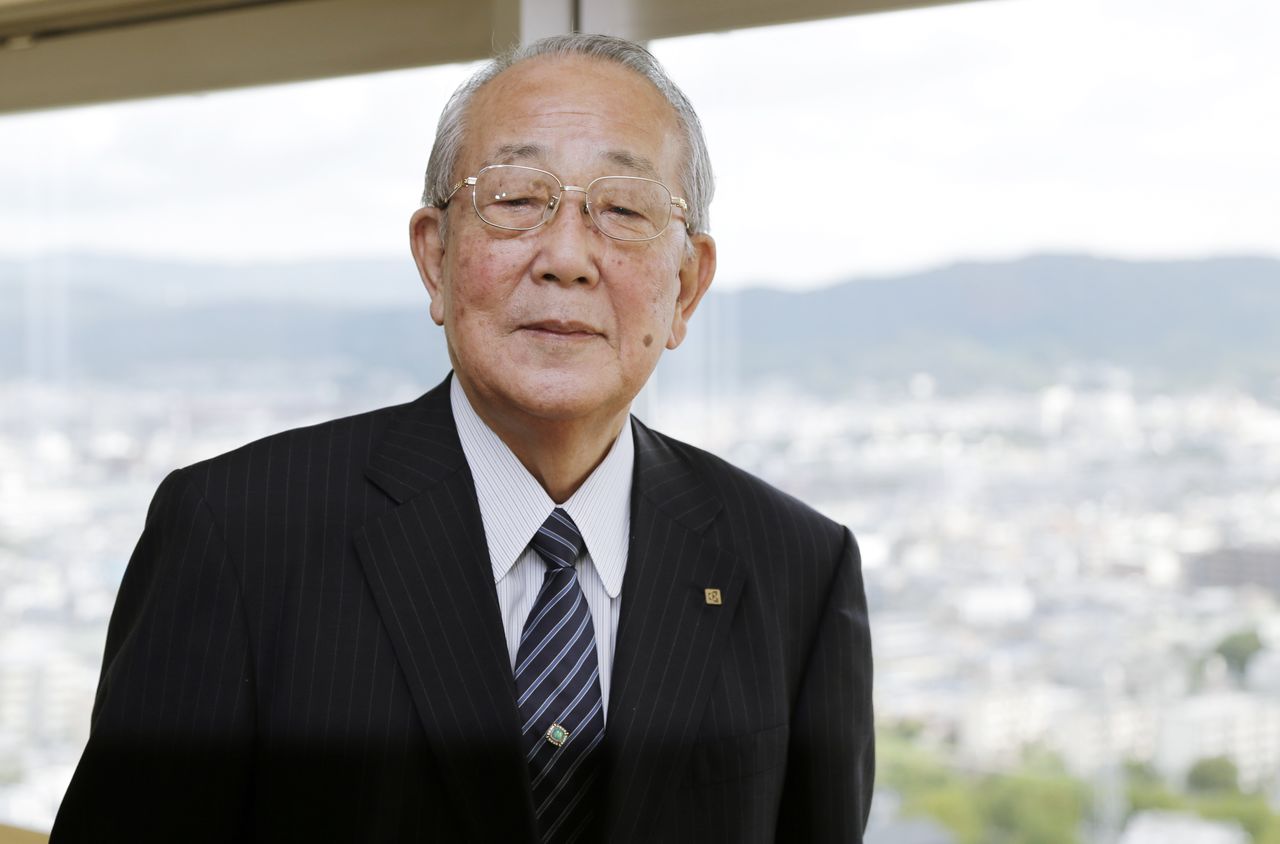 Nakamura Itaru, commissioner general of the National Police Agency, offers his resignation after the publication of the NPA report on the July 8 assassination of former Prime Minister Abe Shinzō.

The cabinet approves an allocation of ¥249 million from the fiscal 2022 budget toward the state funeral of former Prime Minister Abe. The ceremony will take place at the Nippon Budōkan in Tokyo on September 27.

Prime Minister Kishida takes part remotely in the eighth Tokyo International Conference on African Development, held in Tunis, Tunisia. He is among the leaders adopting the Tunis Declaration, which stresses the importance of “sound development finance adhering to international rules and standards” and expresses “serious concern about the situation in Ukraine and its impact on African and global economies.” 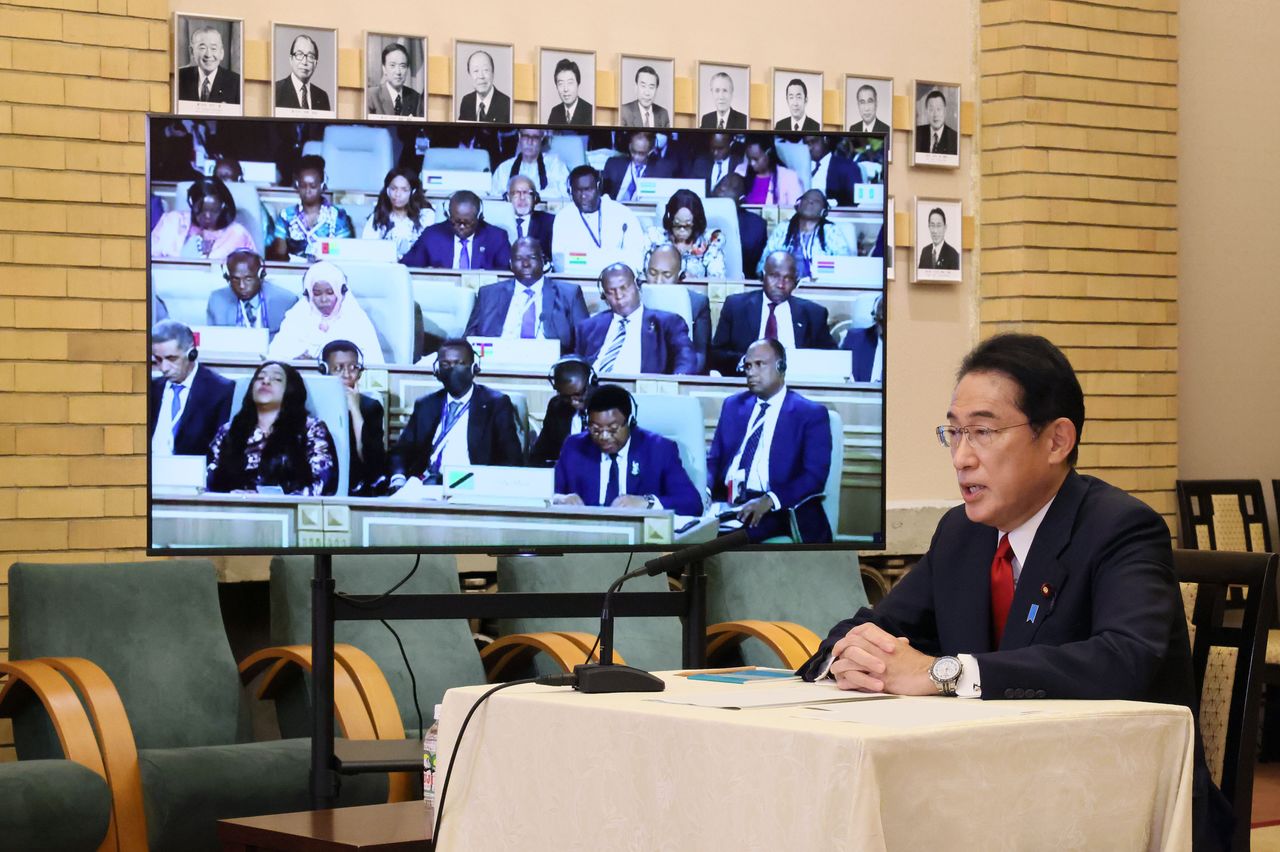 The evacuation order imposed after the March 2011 Fukushima nuclear accident is lifted in parts of the town of Futaba in Fukushima Prefecture, making it possible for residents to return to live there for the first time in over 11 years.