TOKYO (Reuters) - Japan will kick off its COVID-19 vaccination programme on Wednesday amid concerns that a shortage of special syringes could lead to the waste of millions of doses of Pfizer vaccine as the country grapples with its third and most serious wave of infections.

Japan’s vaccination programme chief Taro Kono announced the launch of the programme at a news conference on Tuesday after the government officially approved Pfizer Inc’s COVID-19 vaccine on Sunday, the first such approval in Japan.

But fears are growing in Japan that millions of doses of Pfizer vaccine could be wasted due to a shortage of special syringes that maximise the number of shots used from each vial.

The government has made urgent requests, but manufacturers are struggling to ramp up production fast enough, creating the latest headache for Prime Minister Yoshihide Suga, who suffers from weak public support.

Japan’s vaccination drive, the last to be launched among G7 industralised nations, will start with 40,000 medical workers.

The government will then target people aged 65 or above, those with existing health conditions, and workers at elderly care facility workers. The vaccination drive would be completed within a year, Kono said.

“Now that we are starting our inoculation drive - a crucial card to play in our fight against the coronavirus pandemic - I hope that many people get vaccinated while correctly understanding the benefits and risks,” he said.

Inoculating Japan’s population swiftly is a top priority for Suga’s government as he is determined to hold the Tokyo Olympics this summer after the Games were postponed for a year due to the COVID-19 pandemic.

Japan, with a population of 126 million, has so far signed contracts to procure 314 million doses of COVID-19 vaccines from Pfizer Inc, AstraZeneca Plc and Moderna Inc, enough for 157 million people.

Japan last month signed a contract with Pfizer Inc to procure 144 million doses of its vaccine, or enough for 72 million people.

One vial is meant for six shots, Pfizer says, but it takes special syringes that retain a low volume of solution after an injection to extract six doses, while only five shots can be taken with standard syringes that the government has stored up in preparation for the inoculation drive.

When asked last week, Kato did not directly answer questions whether the shortage of the ideal syringe meant the number of shots Japan can administer would be reduced, but on Tuesday he conceded that without it there would be waste.

“When it comes to what’s left in vials and syringes, what’s unused will be disposed of,” Kato said.

Both a Pfizer Japan spokeswoman and a Japanese health ministry official declined to say whether the contract to supply Japan with 144 million doses of vaccine by the end of the year is based on six doses being taken from each vial.

“I want to do everything I can to make sure that we can get six doses, considering that there are so many people around the world waiting to be vaccinated, and Japan can’t be the one country that is wasting its vaccines,” Kono said.

In a bid to minimise the amount of vaccine left unused in syringes and vials, the government is asking medical equipment manufacturers to boost output of the low dead-space syringes, but there are doubts whether that can be done quickly enough.

Although daily cases have been in decline in recent weeks in Japan after peaking in early January, Tokyo and nine other prefectures are still under the coronavirus state of emergency. 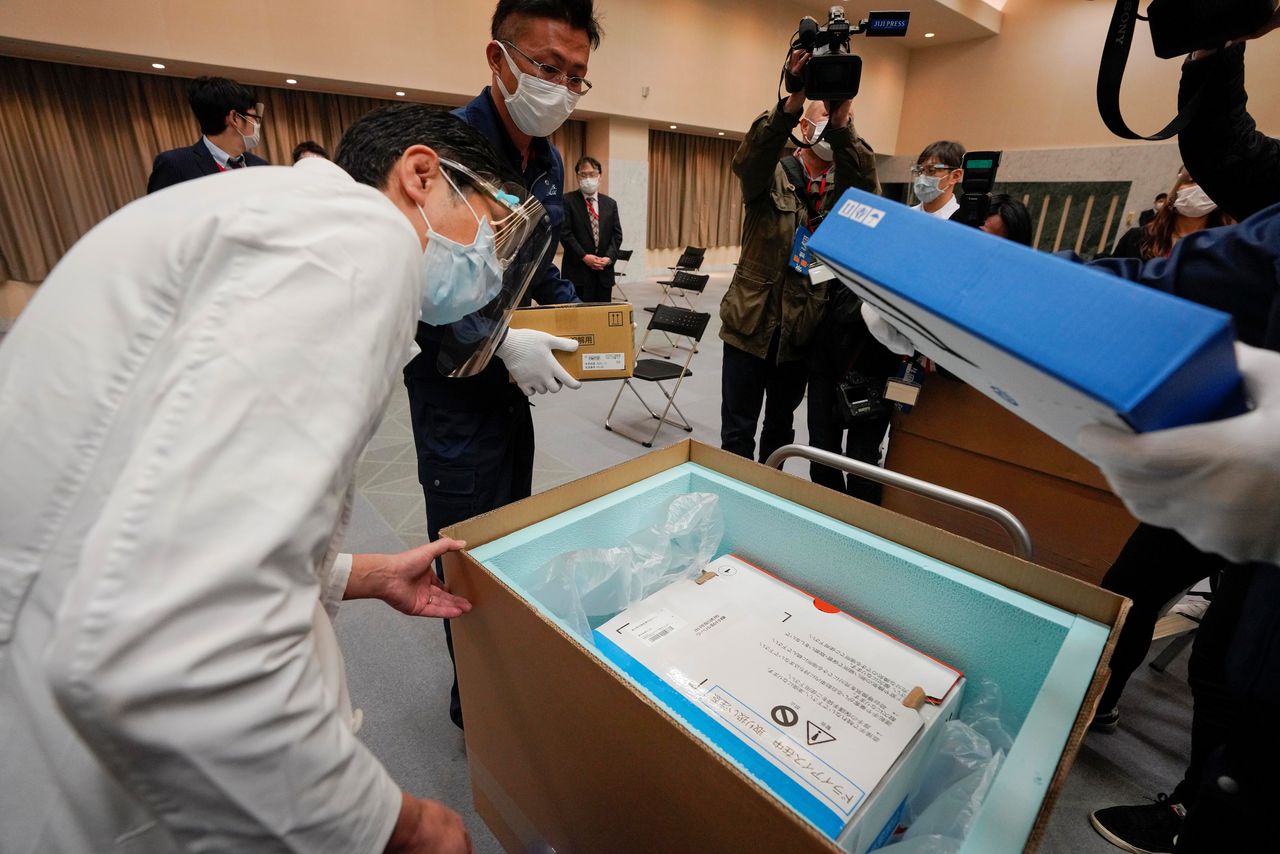 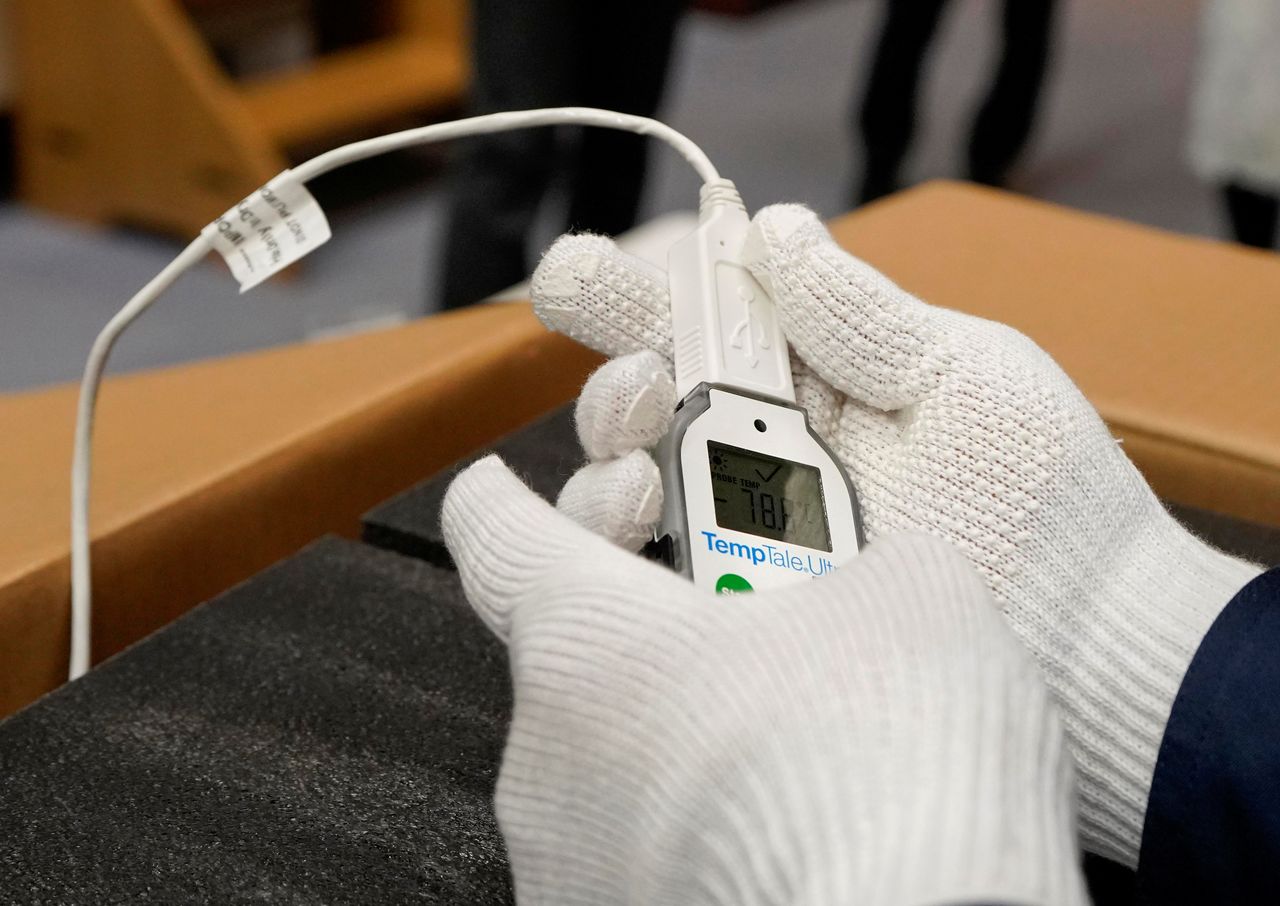 A thermometer shows the temperature value of the Pfizer Inc’s COVID-19 vaccine at a hospital in Tokyo, Japan, February 16, 2021. Kimimasa Mayama/Pool via REUTERS