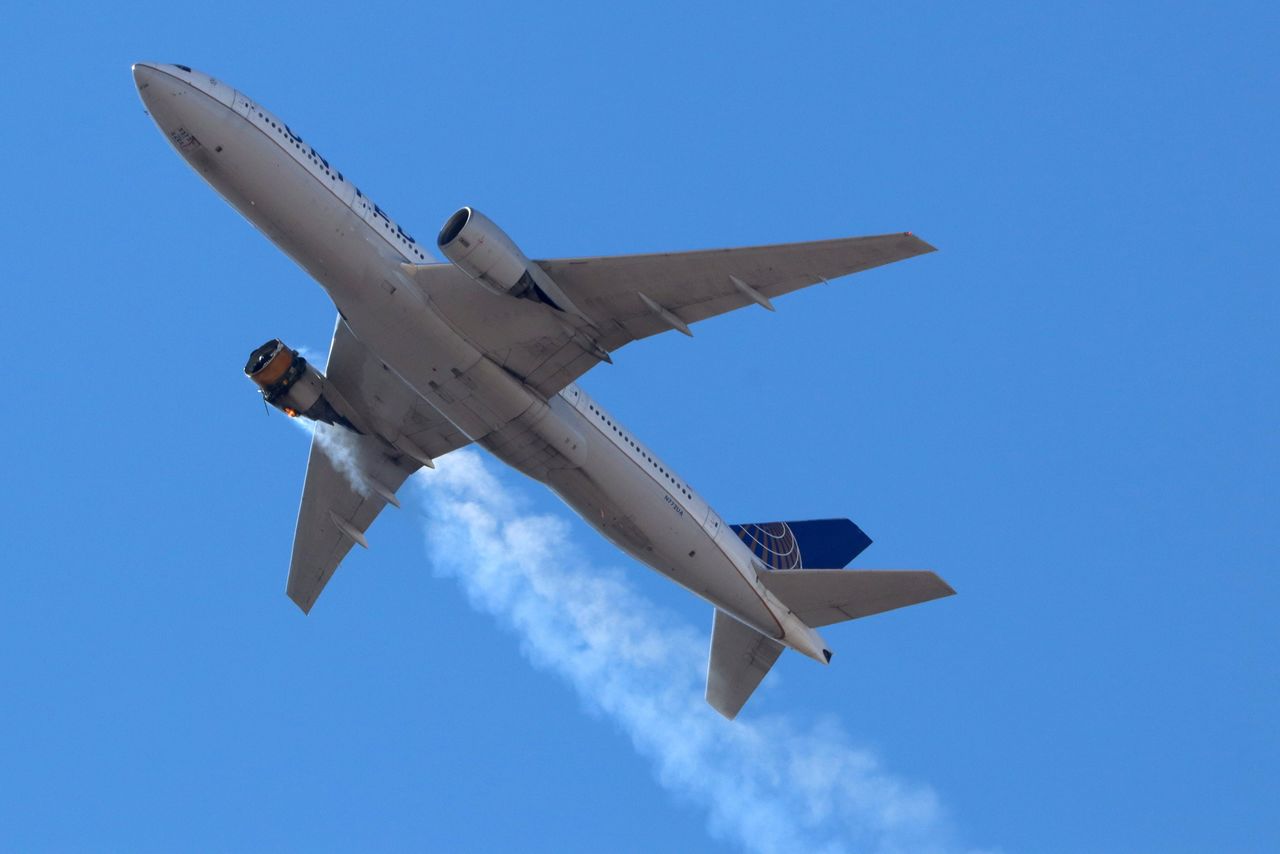 FILE PHOTO: United Airlines flight UA328, carrying 231 passengers and 10 crew on board, returns to Denver International Airport with its starboard engine on fire after it called a Mayday alert, over Denver, Colorado, U.S. February 20, 2021. Hayden Smith/@speedbird5280/Handout via REUTERS/File Photo

(Reuters) - Showers of jet engine parts over residential areas on both sides of the Atlantic have caught regulators’ attention and prompted the suspension of some older Boeing planes from service.

The Saturday incidents involving a United Airlines 777 in Denver and a Longtail Aviation 747 cargo plane in the Netherlands have put engine maker Pratt & Whitney in the spotlight - although there is as yet no indication that their causes are related.

Raytheon-owned Pratt & Whitney said it was coordinating with regulators to review inspection protocols.

Following the Colorado engine failure, when United Flight 328 dropped debris on a northern Denver suburb before landing safely, Boeing recommended the suspension of 777s with the same PW4000 turbine, and Japan made it mandatory.

The European Union Aviation Safety Agency (EASA) weighed in on Monday, requesting more information on the Pratt engines in light of both events. A woman sustained minor injuries in the Dutch incident, which scattered turbine blades on the town of Meerssen. One was found embedded in a car roof.

Both incidents involve the PW4000 engine type that equips a relatively small number of older planes, some grounded by the pandemic, limiting the likely repercussions.

They nonetheless bring a new headache for Boeing as it recovers from the much more serious 737-MAX crisis, which saw its flagship narrowbody jet grounded after two deadly crashes.

“This is certainly an unwelcome situation for both Boeing and Pratt, but from time to time issues will pop up with aircraft and engines,” said Greg Waldron, a managing editor at industry publication Flight Global.

“The PW4000-powered 777-200 is slowly fading from service,” he said, and the COVID-19 slump means that airlines forced to suspend it “should be able to fill any network gaps” with 787s or other 777s equipped with General Electric engines.

The 777-200s and 777-300s affected are older, less fuel-efficient models still flown by five airlines: United; Japan Airlines; ANA Holdings Inc; Asiana Airlines Inc and Korean Air. Most are in the process of being phased out.

Boeing said 69 of the 777s operating globally with PW4000s had been in recent service, with another 59 stored. Pratt & Whitney engines power less than 10% of the delivered 777 fleet of more than 1,600 planes.

United suspended 24 of its 777s, pre-empting Boeing’s advice, after the Saturday blow-out that dropped the right engine’s protective outer casing near homes.

In the Dutch case, the Longtail pilot was informed of an engine fire by air traffic control after taking off from Maastricht bound for New York, and diverted to Liege, Belgium.

The Dutch Safety Board said on Monday it was investigating the incident.

Examination of the 26-year-old United jet showed damage was mostly confined to the right engine, the U.S. National Transportation Safety Board (NTSB) said. Its inlet and casing became detached and two fan blades were fractured, with others exhibiting damage.

The FAA said early findings suggested that “inspection interval should be stepped up for the hollow fan blades that are unique to this model of engine, used solely on Boeing 777 airplanes”.

Another United 777 of the same vintage suffered an engine failure in February 2018, when a cowling fell off about 30 minutes before the plane landed safely. A full-length fan blade fracture was behind the incident, the NTSB determined.

After a malfunction forced a Tokyo-bound JAL 777 to return abruptly to Naha airport in December, Japan’s Transport Safety Board reported finding two damaged fan blades, one with a metal fatigue crack. Its investigation is ongoing.

JAL, which operates 13 of the planes, said they were scheduled for retirement by March 2022.