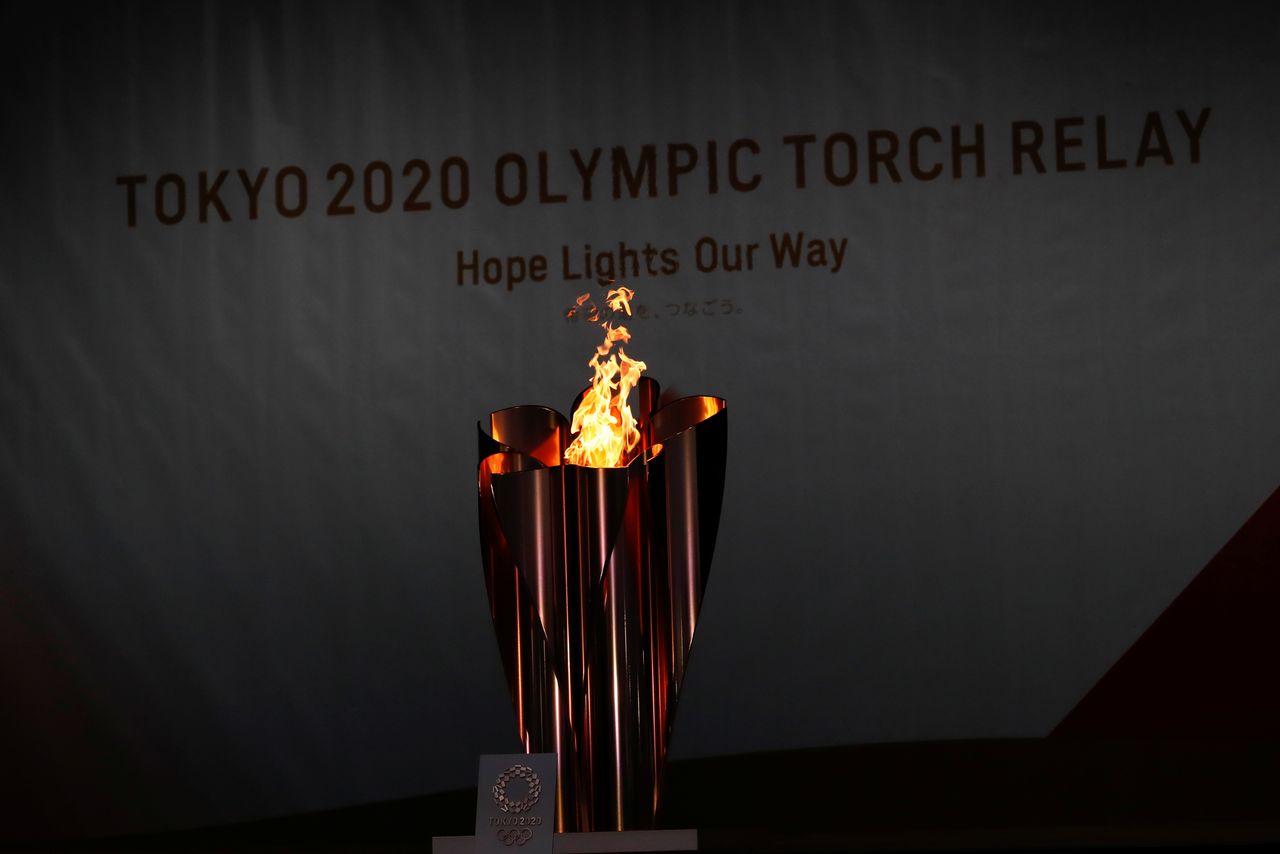 FILE PHOTO: The celebration cauldron is lit at Hibarigahara Festival Site, during the last leg of the first day of the Tokyo 2020 Olympic torch relay, in Minamisoma, Fukushima prefecture, Japan, March 25, 2021. REUTERS/Issei Kato

TOKYO (Reuters) - The governor of Japan’s Osaka prefecture has called for the cancellation of the Olympic torch relay in its largest city amid a sharp rise in COVID-19 cases, presenting an early test to organisers as they plan for the Games during the pandemic.

Osaka Governor Hirofumi Yoshimura said on Thursday the torch relay in the city should be cancelled and he wanted to have discussions with the Tokyo organising committee on the matter.

Prime Minister Yoshihide Suga told reporters he thought the decision had already been made.

“I understand Osaka has been cancelled as a result of talks between Tokyo Olympic organisers and the torch relay committee in Osaka,” Suga told reporters.

But the Tokyo organising committee denied there had been such a decision.

“We will continue to hold close discussions with the Osaka prefectural authorities regarding the implementation of the Olympic Torch Relay, and strive to announce the outcome as soon as possible,” Tokyo organisers said in an emailed comment.

The relay began last week in Fukushima and is being seen as the first major test of the Games in holding a large-scale event while implementing stringent health protocols.

Around 10,000 runners will carry the torch through the country’s 47 prefectures over 121 days.

Tokyo Olympics organisers require roadside spectators to wear masks, practise social distancing and not cheer out loud to prevent the spread of the novel coronavirus, and there have been no reports so far of infections arising from the relay.

Osaka, however, is battling a resurgence in infections.

Japan’s government on Thursday said it would impose emergency measures such as shorter business hours and asking people to work from home in the western Japan prefecture and two other areas to halt the rise in cases.

Those measures are scheduled to last for a month, until May 5, coinciding with the relay which is scheduled to go through Osaka on April 13-14.

“I think we need to have talks with the city of Osaka, but personally I think the torch relay in Osaka city should be cancelled,” Osaka Governor Yoshimura told reporters.

Officials in Nagano, also worried about a rise in infections, decided to bar spectators from parts of the torch relay as it passed through their prefecture on Thursday.

Although Japan has been affected by the pandemic less severely than the United States and Europe, its vaccination campaign is off to a slow start while some prefectures are seeing an uptick in new infections.

Most Japanese oppose holding the Games this summer during the pandemic, surveys have shown.

Olympic organisers last month decided to bar international spectators from the Games, and this month are due to decide on the maximum capacity for spectators in venues.

The Olympics, postponed by a year because of the pandemic, are scheduled to take place from July 23 to Aug. 8 and the Paralympics from Aug. 24 to Sept. 5.