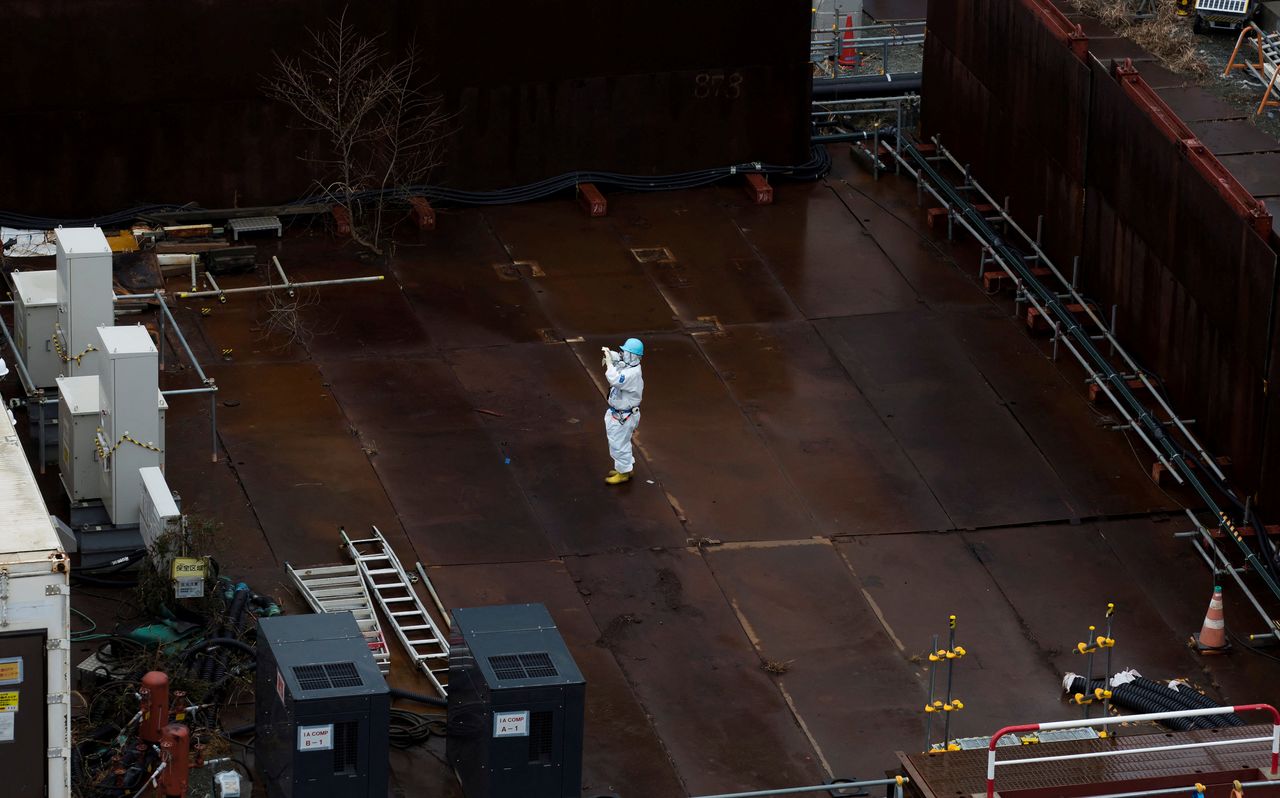 By Yuka Obayashi and Kantaro Komiya

TOKYO (Reuters) -Japanese turned off neon signs, dimmed their lights and dialled down thermostats on Tuesday after the government issued an urgent call to save energy to avoid blackouts after an earthquake last week caused a serious power shortage.

Up to 3 million households faced the threat of blackouts on Tuesday night, as utility Tokyo Electric Power Co (Tepco) warned of tight supply and surging demand as snow fell across Tokyo and the temperature dropped to 2 degrees Celsius (35.6 Fahrenheit).

But by later in evening, the country appeared likely to avoid blackouts, the Ministry of Economy, Trade and Industry (METI) said. Still, authorities were keeping a power-supply warning in place for Wednesday, public broadcaster NHK said, meaning the world's no.3 economy could still face blackouts.

A similar warning for the northeastern area was lifted, NHK said.

A magnitude 7.4 earthquake last week off the northeastern coast - the same region devastated by an earthquake and tsunami in 2011 - temporarily cut power to about 2 million households, including hundreds of thousands in Tokyo.

"At this rate, we are coming closer to a state where we will have to conduct power outages similar to those that took place after the quake," the trade minister, Koichi Hagiuda, said earlier on Tuesday.

The quake hit six thermal plants, knocking them out of operation in areas served by Tepco and Tohoku Electric Power Co, and the damage could leave some of them idle for weeks or even months, Hagiuda said.

Chief Cabinet Secretary Hirokazu Matsuno earlier called on residents in eastern Japan affected by the power crisis to do their part, including by lowering thermostats to around 20C (68F) and switching off unnecessary lights.

Numerous users responded to the call.

National broadcaster NHK dimmed its studio lights while electronics retailer Bic Camera turned off about half of the televisions at dozens of its stores.

The 634-metre (693-yard) Tokyo Skytree tower turned off its lights for the whole day for the first time and operators of the city-centre Tokyo Tower lit up only its bottom half.

Retail giant Seven & I Holdings said 8,500 7-Eleven stores set their thermostats to 20C - one degree cooler than usual - while its Ito-Yokado supermarkets were dimming their lights by 10%.

Nissan Motor said it was using an in-house power generator for 13 hours at its factory north of the capital.

Many individual consumers also did their bit.

"I use the heater a lot so I will try to do my part to save energy," said college student Shuntaro Ishinabe, 22.

Government spokesperson Matsuno said the request to save energy was unlikely to extend beyond Tuesday, given an expected rise in temperatures and the addition of more solar power generation as the weather improved.

Japan has faced a tough energy market since the 2011 earthquake and tsunami crippled Tepco's Fukushima Daiichi plant, causing the worst nuclear disaster since Chernobyl and leading to the suspension of operations at most of Japan's nuclear reactors.

With energy prices surging on tight global supply and the Ukraine crisis, Japan's biggest business lobby, Keidanren, has been calling for a swift restart of the nuclear plants.

"A sudden halt of energy causes a lot of problems, and I think (the general public) has really felt the importance of energy security given recent events," Keidanren Chairman Masakazu Tokura said.

"Given the larger trend to become carbon neutral and cut back on greenhouse gases, I believe there will be more difficulties unless we restart nuclear power plants swiftly."