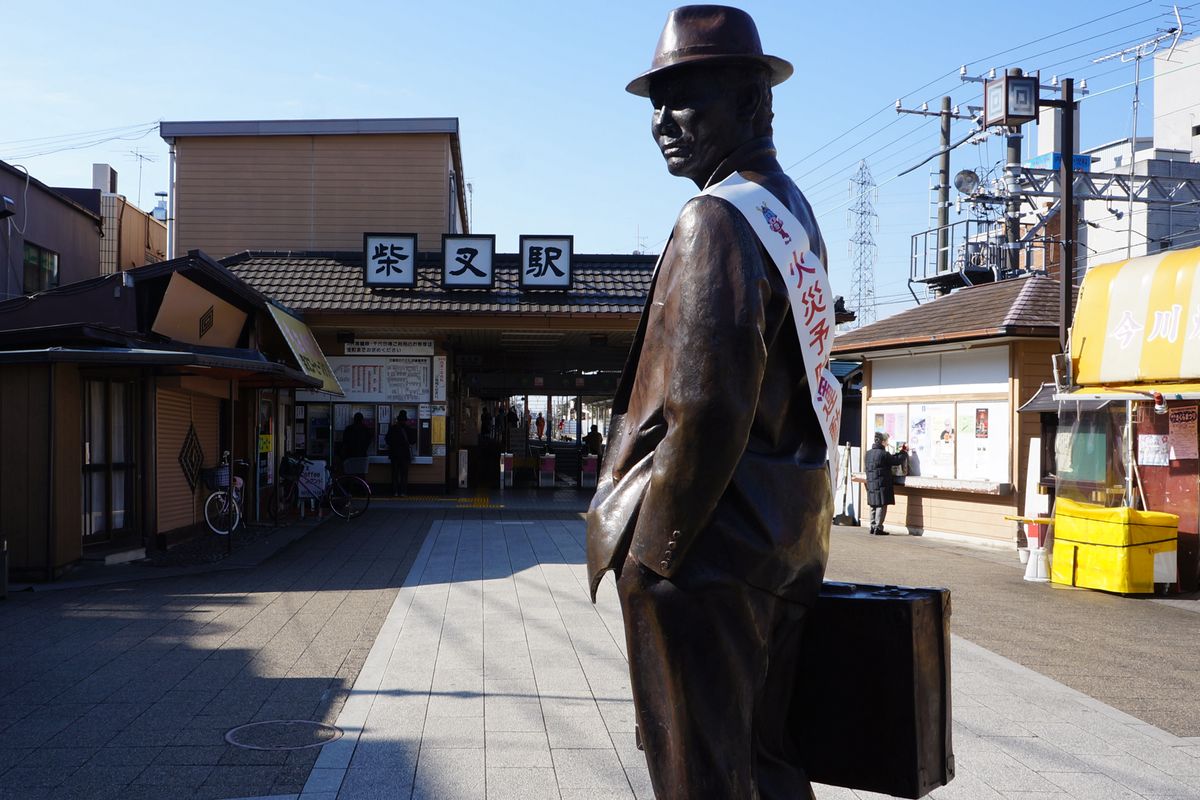 Tora-san stands watch over the Shibamata neighborhood. (The sash promoting fire safety is a recent addition; don’t look for it in any of his movies.)

Outside Shibamata Station, in the north of Tokyo, stands a statue of a shabby traveling salesman with one hand in his pocket and the other holding a battered suitcase. Although he is wearing a jacket of sorts, his pork pie hat and sandals make it plain that he is no typical Tokyo salaryman. Look closely and you can see that the toes of his left foot are shiny from where people have touched them for good luck.

The statue is of Tora-san, the hero of the absurdly long-running film series Otoko wa tsurai yo (It’s Tough Being a Man) that ran to 48 installments from 1969 to 1995. Two or three films were released annually until the series started to lose momentum in the 1990s, when the pace was dialed down to a single late-December release each year. Still, the series didn’t actually come to an end until the death of Atsumi Kiyoshi, the actor who starred as Tora-san in each and every episode.

Tora-san is described as “our lovable tramp” in one translation of the first film’s title, but like many comic characters, he seems like he might be a bit much to take if you really met him. Despite good intentions, he’s quick to get angry and drinking seems to bring out the worst in him. In the first film, his drunken, off-color jokes spoil a meeting with a potential marriage partner for his sister, but he refuses to take any blame.

Throughout the series, Tora-san isn’t as fortunate as his statue’s lucky left foot might suggest. He suffers heartbreak again and again as the women he falls in love with end up with other men. Tora-san typically meets a new flame as he roves around Japan (and occasionally overseas), offering plenty of opportunity for scenic location cinematography. But another key trope of the films is that he always returns to Shibamata, home of his uncle, aunt, and younger sister.

In the films, Shibamata is a place of traditional small shops and close community ties. It is in the area known as shitamachi, the rough-and-ready “low town” working-class neighborhoods in the east of the metropolis that still retain a flavor of the time when Tokyo was Edo. Tora-san himself certainly recalls an older Japan through his ever-present traditional sandals and the protective amulet he wears prominently around his neck. 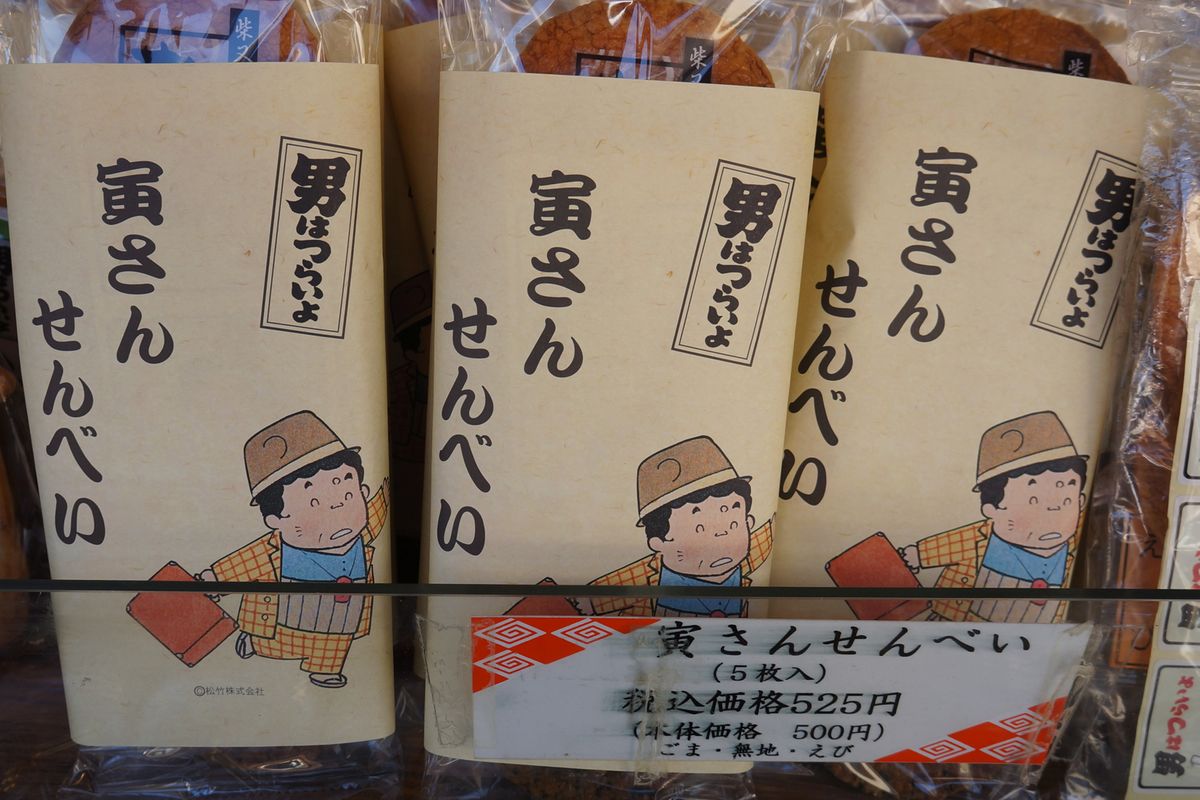 Shibamata today makes the most of its famous son. Go past the statue, erected in 1999, and into the main shopping street and you’ll find towels, rice crackers, and other Tora-san-themed goods wherever you look. The shop where Tora-san’s uncle once sold kusa-dango (sweet dumplings flavored with mugwort) sells the same snack to nostalgic customers. The success of the films prompted the shop, previously Shibamata-ya, to change its name to Tora-ya.

At the end of the street is the temple Shibamata Taishakuten, home to the priest in the series, Gozen-sama, played by Ryū Chishū. After dramatic roles in Late Spring, Tokyo Story, and other classics directed by Ozu Yasujirō, Ryū became almost as associated with the benevolent but at times unworldly Gozen-sama as Atsumi was with Tora-san. And for visitors who still haven’t got their fix, it is only a short walk from the temple to the Tora-san Museum.

The film series started as a remake of a TV series also titled Otoko wa tsurai yo, in which Tora-san ultimately meets an unfortunate end in Okinawa after being bitten by a snake. Outraged audiences forced director Yamada Yōji to bring him back to life on the big screen, where he went from strength to strength—the films featured regularly in annual top box office lists and were endlessly repeated on TV.

There have been multiple adaptations of the character, including one animated series in which Tora-san is a cat and that most typically Japanese spin-off, the pachinko game. Emperor Shōwa is known to have been a fan of the films, and Prime Minister Obuchi Keizō (1998–2000) was listed as member no. 1 in the rolls of the official Tora-san fan club. Even the North Korean leaders Kim Il Sung and Kim Jong Il are said to have been among the salesman’s many devotees.

I suppose Tora-san’s cheerful ability to bounce back regularly from disappointment (if only once from death) is part of what makes him popular. Although he never catches a break, he keeps on trying somewhere else—a thoroughbred Tokyoite who can’t stop wandering. Looking at his statue, fixed in Shibamata now, I wonder if he’s thinking of getting down off his plinth and hitting the road again. 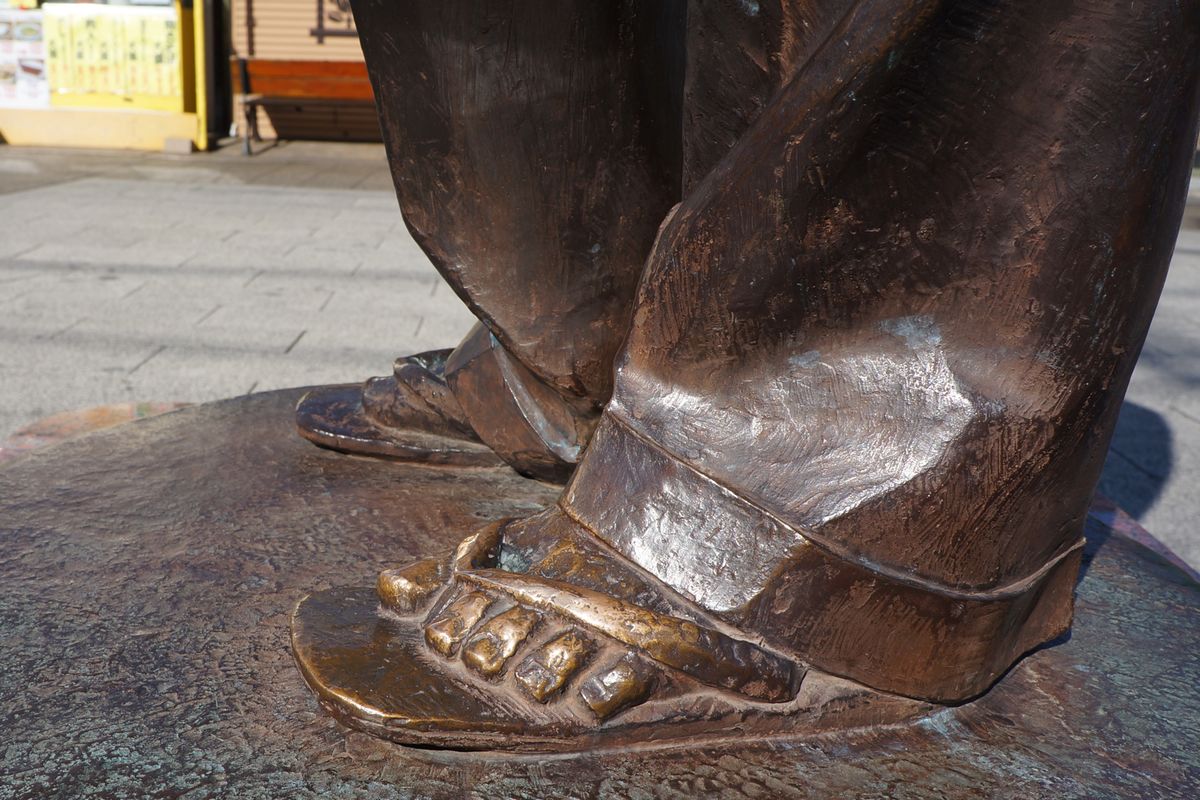 The character's well-worn sandals marked him as a throwback to earlier days, endearing him to the Shōwa-era audiences that made his series one of the best-loved in Japanese film.