In With the New: The Seasonal Tradition of Entrance Ceremonies

The SL Square, named for the C11 steam locomotive on display to the west of Shinbashi Station, swarms on any given weekday evening with office workers on their way home from work—or on less steady legs, on their way home from after-work drinks. It is also a regular haunt for camera crews looking for “man on the street” sound bites to flesh out their news reports with perspective from veterans of the Japanese corporate trenches.

The other evening, though, as I was waiting on the Shinbashi platform for my own train home, I looked down to see that the square was almost wholly occupied not by experienced businessmen, but by newly minted company recruits. These shinnyū shain, decked out in crisp off-the-rack suits and fresh from their first day of work, were vibrant with youthful optimism. Just like the cherry blossoms that we’ve been enjoying in recent days, they were a poignant reminder of the season.

April is a time for new beginnings in Japan: the new fiscal year for corporate and government purposes, the new school year for students, and—lucky for us in 2014—the new consumption tax rate. Perhaps the most touching symbol of April’s fresh starts are the children and young adults just entering school or new jobs. If I were inclined to write a haiku about April it would likely include a reference to the shiny randoseru school packs of first graders, the baggy school uniforms of new junior high schoolers, or the raven-black “recruit suits” of first-year company employees.

One of the more interesting aspects of all this freshness to me as an American is the Japanese penchant for ceremonies. On my first days at both school and work, I recall just showing up and getting down to business. Japan, though, celebrates each new start, from kindergarten to company life, with an entrance ceremony.

There does not seem to be a set structure for school entrance ceremonies (nyūgakushiki), but they tend to be fairly uniform from kindergarten to high school. The principal stands at the front, greets everyone, and shares a short message. The name of each new pupil is called out, and they reply with—hopefully—a hearty “yes.” The assembly might sing the national anthem and school song, and a student from a higher grade often makes a welcome speech. Older students then show the newcomers around. They get to see their new homeroom, meet their new teacher, and then it’s time to go enjoy a nice celebratory lunch as a family. 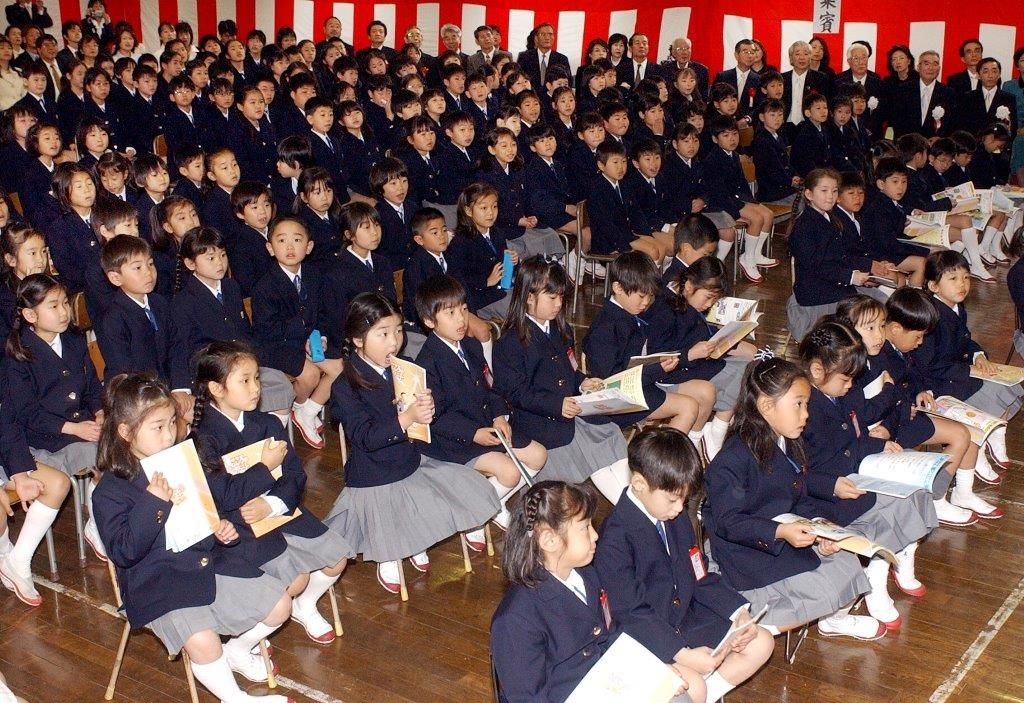 New first-graders experience (endure?) one of the many entrance ceremonies of their lives. (Courtesy Jiji Press.)

Entrance ceremonies are exciting, but can be quite stressful when deciding what to wear. Students have it easy, attending in their uniforms, if the school has them, or in something dressy. Fathers usually attend in a suit, but have to contend with choosing an “appropriate” tie. Things are trickiest for mothers, as there does not seem to be a universal dress code. A common topic of discussion on Internet forums is whether it is most appropriate to wear a black or navy-blue suit, to opt for something pastel, or to go all out and attend in a kimono. Another popular topic is the financial repercussions of this decision.

An interesting new attendance phenomenon has begun popping up at some colleges and universities. Traditionally, university entrance ceremonies were student-only affairs, but a recent article in the Mainichi Shimbun (in Japanese) reported that it has become increasingly common for parents to attend. Schools seem to have welcomed this development, but have often needed to make special arrangements—Kansai University this year sat the roughly 5,500 parents in attendance in a separate hall and broadcast the ceremony on a monitor. The article points to a shift in attitudes underlying this change, with parents showing a stronger interest in attending and children feeling more inclined to let them.

Undoubtedly, the most famous attendees of an entrance ceremony this year were the crown prince and princess of Japan. Their daughter, Princess Aiko, entered her first year at Gakushūin Girls’ Junior High School.

After school comes the company entrance ceremony (nyūshashiki). These have a reputation as stuffy, formal affairs, with new employees pledging their allegiance to the company and long-winded messages by the CEO, but some can be very dynamic. The ceremony at the food processing firm Kagome in Nagoya this year was “interrupted” by a local idol group who had attendees don brightly colored jackets—everyone would have been clad in black up to then—and do an exercise routine named after a popular company brand of vegetable juice. Nasu Animal Kingdom, a zoo in Tochigi Prefecture, has the custom of welcoming both newly arrived animals and employees in the entrance ceremony. Japan Airlines topped off its ceremony by tossing carefully folded paper airplanes into the air, while All Nippon Airways, not to be outdone, had new recruits write messages on the fuselage of a retired Boeing 747.

I have only observed entrance ceremonies in Japan, so I cannot speak to the feelings and thoughts of the participants. But one thing I do know is it won’t be too long before those new school bags are scuffed, uniforms stained, and suits wrinkled and creased. Just like the cherry blossoms, though, a fresh set of these spring sights will return again next year.