Since UNESCO designated washoku, or traditional Japanese cuisine, as an intangible cultural heritage in 2013 much ado has been made over the high-end fare and greatly touted omotenashi (selfless hospitality) found at restaurants in upscale districts, such as Ginza in Tokyo. One dish that has been absent amongst all the fanfare is the modest bowl of soba slurped down by millions each day at tachigui, or standing shops, all around the nation. While these buckwheat noodles may not be as glamorous as a ¥20,000-plus sushi dinner, they have a long and rich history as washoku for the common people.

Soba as a grain has been consumed in Japan for millennia, but didn’t debut as a noodle until early in the Edo period (1603–1868). According to some stories it was brought to the newly established capital of Edo, the old name of what is now Tokyo, by laborers recruited from the soba-rich Shinshū and Kōshū regions (present day Nagano and Yamanashi Prefectures).

An early predecessor of today’s tachigui-soba shops was Kendon Sobaya, an establishment famous not only for propagating soba’s popularity among the denizens of Edo, but also for its barebones service. Modern patrons of standing shops will still find minimum service the norm. Excluding preparation of dishes, shops are self-service from start to finish. Diners buy meal tickets known as shokken from vending machines set up near the entrance, get their own chilled water from dispensers, and bus their own tables. The sole interaction with staff is handing over the ticket and voicing a preference for soba or thicker, wheat-based udon. 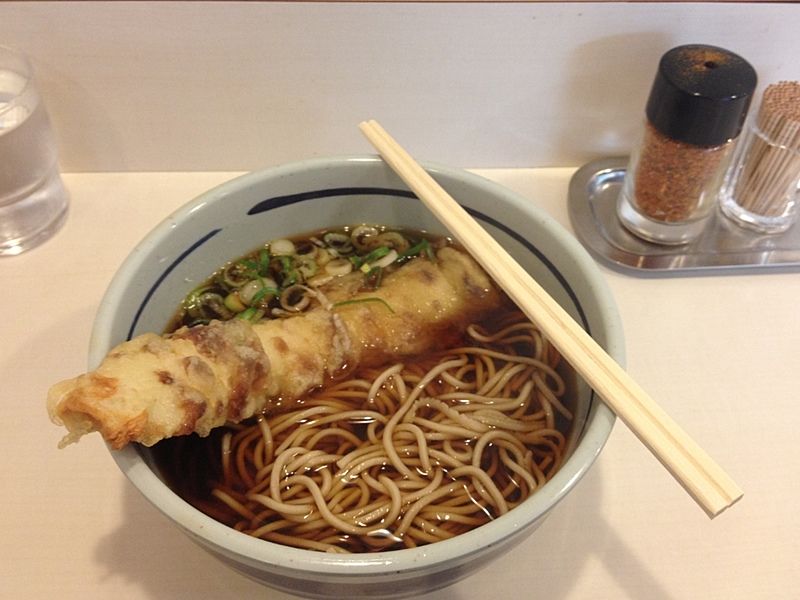 Standing shops are notoriously stark in atmosphere, but dilapidation is not a fitting yardstick to measure by. Some of the most cramped, dingy outlets serve up the best bowls. The association of tachigui-soba with the shabby older businessman set is undeniable, though, and many shops have made efforts to appeal to a broader crowd by adding seating, spiffing up interiors, and expanding menus.

Meals are inexpensive: a basic bowl of kakesoba, just noodles and soup, will set you back around ¥250, and a dish with a few additional toppings, such as batter-fried vegetables or seaweed, won’t run much over ¥500. Undecided customers can whet their appetite gazing at replica offerings set up in display cases near entrances or by looking at pictures taped to the buttons of the ticket vending machines.

Service is fast, with a piping hot bowl ready for slurping within minutes. This quick and cheap approach is what has made tachigui-soba shops regular stops for the eat-and-go crowd for generations. Nowadays, the rushed and hungry can duck in for a quick bite at stands located in train stations, often right on the platform. A stroll through side roads near busy stations will also reveal more than a few shops tucked in among the multitude of other eateries. Some noodle otaku profess that quality increases in proportion to a shop’s distance from the station: making up for lower pedestrian traffic means serving a better bowl. 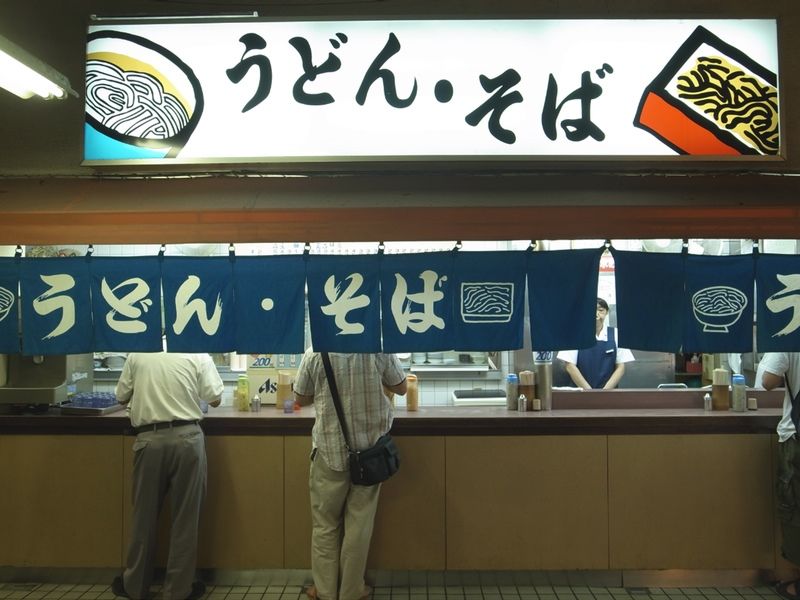 Patrons duck behind the noren curtain for a quick bowl with a view of the kitchen.

Speed and convenience may be hallmarks of tachigui-soba, but flavor is king. Noodles are parboiled in advance to speed up service. They are revived and brought to temperature with a quick dip in boiling water before being sent splashing into a waiting bowl of soup. Sogginess is a sin, though: The discerning Japanese palate demands a moderately stiff noodle, and any establishment serving less will soon find patrons frequenting neighborhood rivals. Soups mustn’t be overly rich and toppings need to be prepared from quality ingredients (a quick litmus test is to see how many toppings remain after the lunch hour rush). One tried and true technique of those on the prowl for a satisfying meal is to watch where taxi drivers stop to eat.

Another positive of tachigui is healthiness: soba is low in calories, high in fiber, and not overfilling. The soup is a simple concoction, consisting mainly of fish stock, soy sauce, and Japanese cooking sake, with saltiness the only major strike against it. Toppings will add a few more calories, but only negligibly, as portions are smaller.

Patrons come from all walks of life, making shops excellent arenas for rubbing elbows with locals. Just keep in mind that it is imprudent to linger longer than it takes to suck down that last drop of soup and say gochisō sama, “Thanks for the meal."

(Banner photo: A standing noodle shop on a platform at Kōriyama station; photo courtesy of Daisuke Matsumura. Photo of customers in soba shop courtesy of Tablexxnx.)