Tokyo is one of the great cities of the world. Including the urban sprawl that surrounds it, extending into several other prefectures, it is one of the most populous, too. As of December 2014, Tokyo Metropolis is home to 13,390,116 people. The greater Tokyo region, which includes neighboring Saitama, Chiba, and Kanagawa Prefectures, had a population of 35,739,042 in 2013 (see p. 15 of this report)—nearly 28% of the national total.

Tokyo functions as the capital of Japan, although there is actually no law specifically designating it as such. The Metropolitan Area Readjustment Act of 1956 defines “the areas of the Tokyo Metropolis and surrounding areas specified by government order” as the capital area, or shutoken. It is home to the central government and the imperial palace, though, and is unquestionably the main driver of Japan’s economy.

Here’s a selection of maps that give some slightly different views of Tokyo. 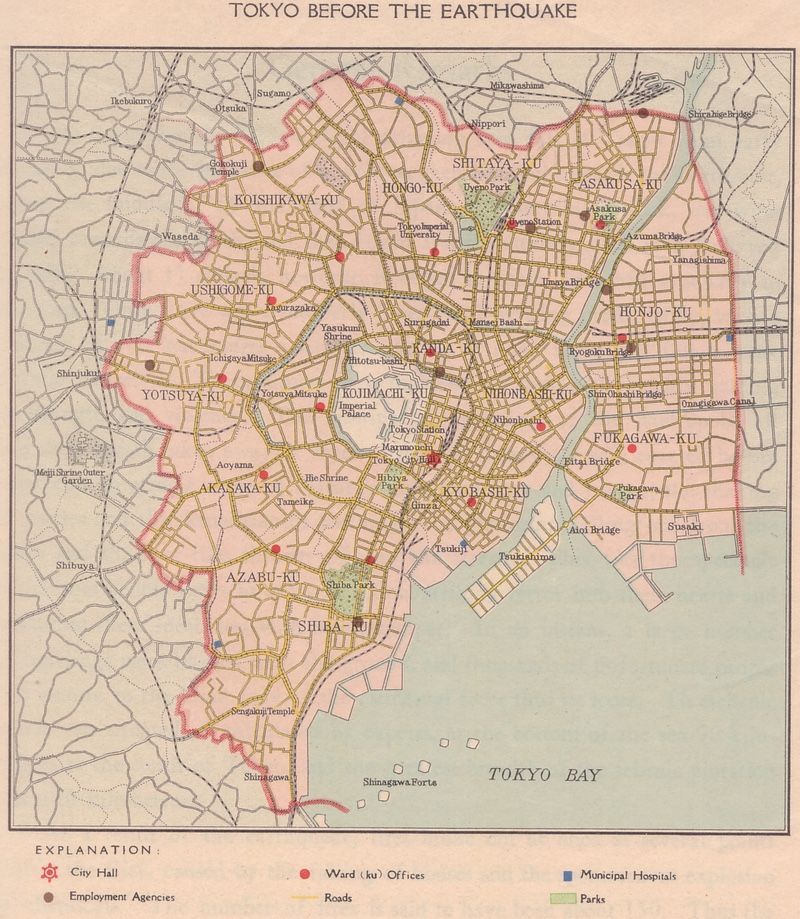 This map of the pre-1923 city appeared in The Reconstruction of Tokyo, published by the Tokyo Municipal Office in 1933, a decade after the Great Kantō Earthquake of 1923 leveled much of the city. The 15 wards of Tokyo City were joined by an additional 20 wards in 1932; in 1943 the city was abolished and made the core of a larger Tokyo Metropolis. Postwar reforms in 1947 produced the metropolitan district as it stands today. (Map via Wikipedia.) 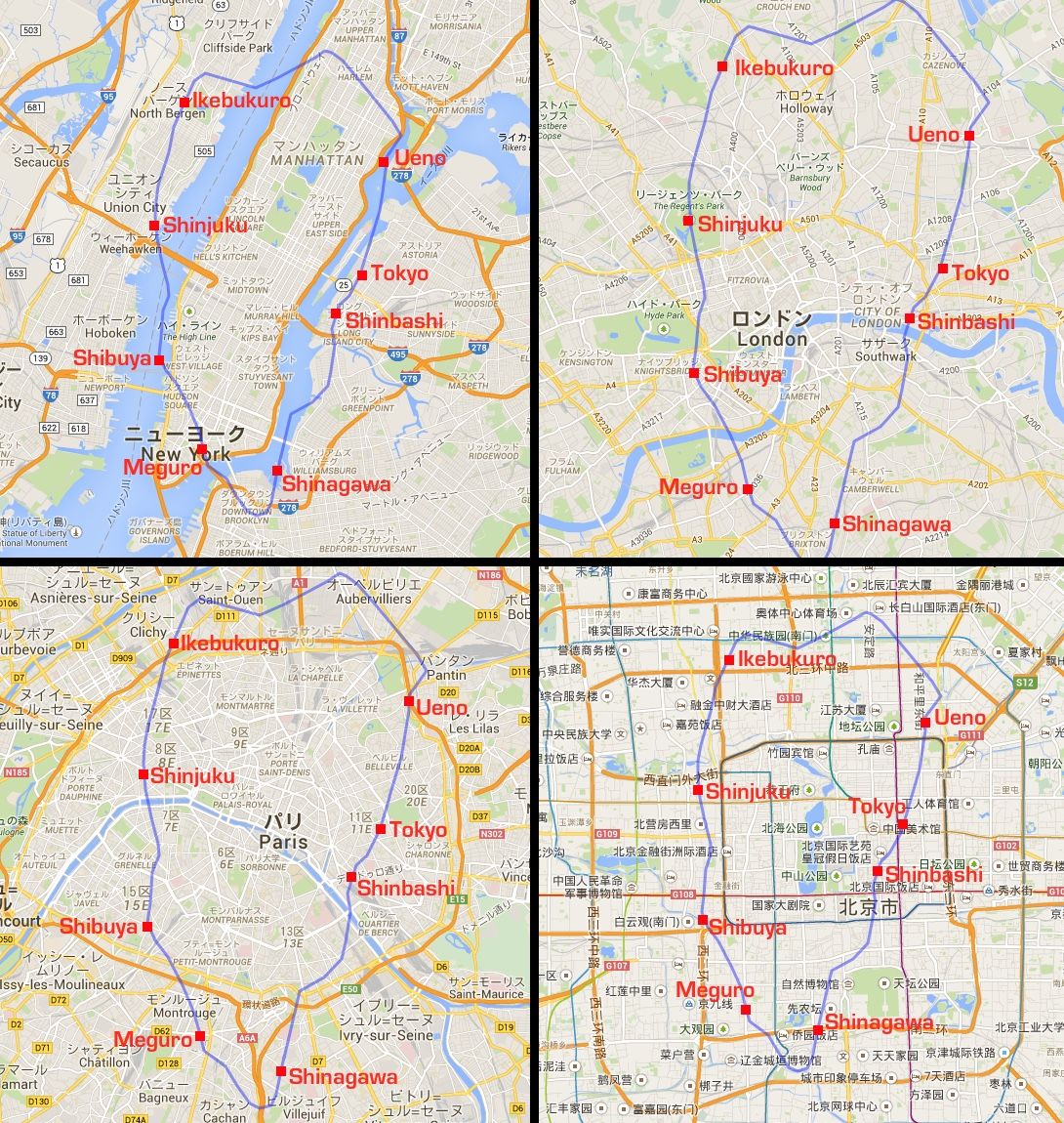 Not a map of Tokyo, but a look at the JR Yamanote Line ringing the metropolitan center, dropped at the same scale onto other world cities: New York, London, Paris, and Beijing. (Maps made at MAPfrappe.) 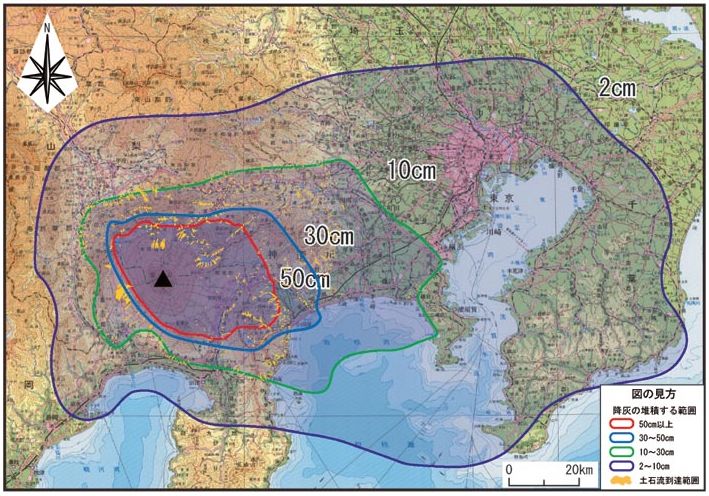 Mount Fuji last erupted in 1707, covering Tokyo in a layer of ash. A similar eruption today would be a major threat to the capital, as ash would likely paralyze transportation networks, leaving millions to make their way home on foot. This map, produced by the Cabinet Office’s disaster management team, is a composite based on prevailing winds in all seasons showing how much ash could fall. Tokyo (the pink section at upper right) looks set to get at least a few centimeters. (Map via Cabinet Office.) 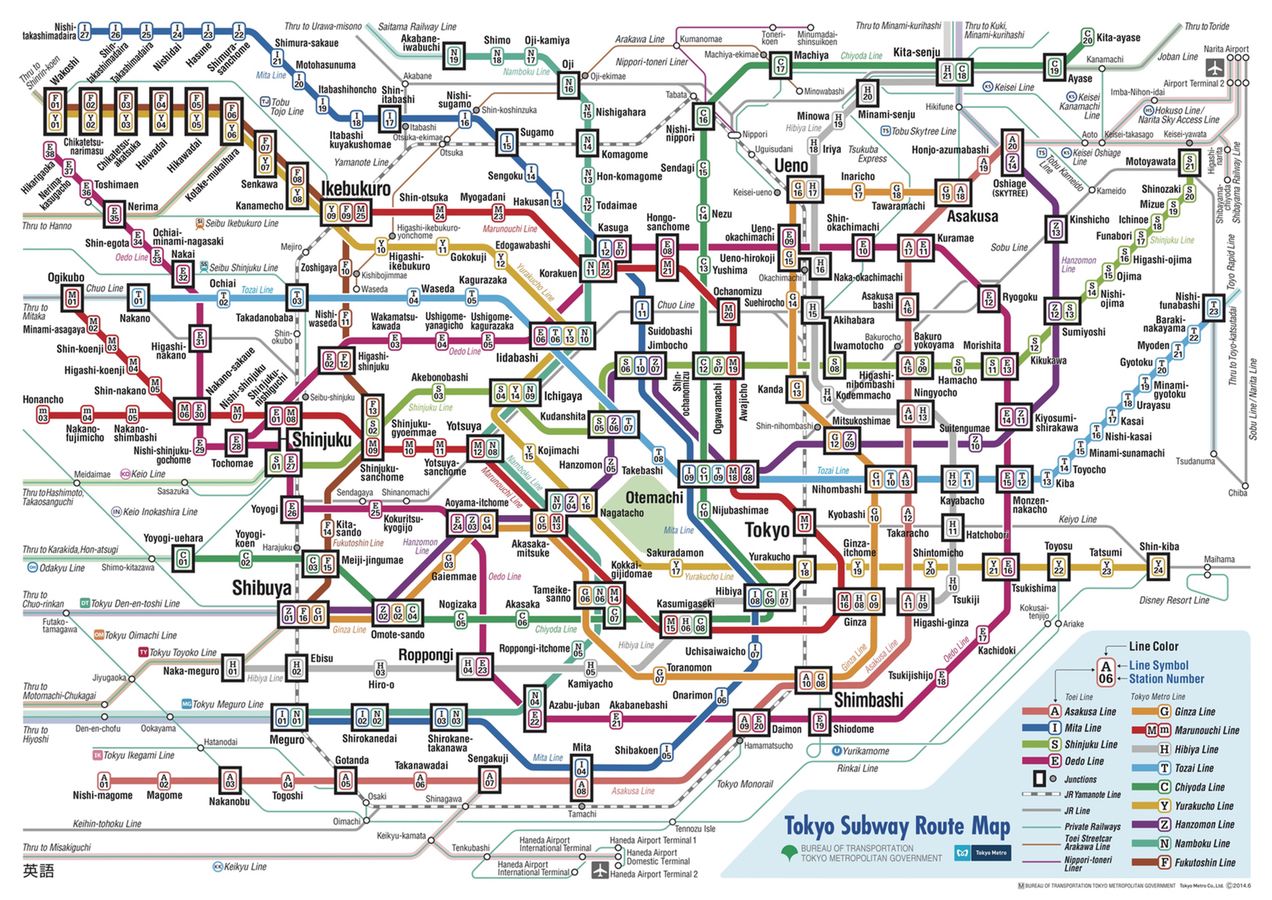 Tokyo’s network of trains and subways can be bewildering even for residents, to say nothing of first-time visitors. This map shows the Tokyo Metro and Toei Subway lines and stations. These connect to JR train lines, as well as private lines operated by Keiō, Seibu, and Odakyū, ensuring that you can get where you’re going—even if you have a hard time figuring out how to do so! (Map via Tokyo Metropolitan Bureau of Transportation.) 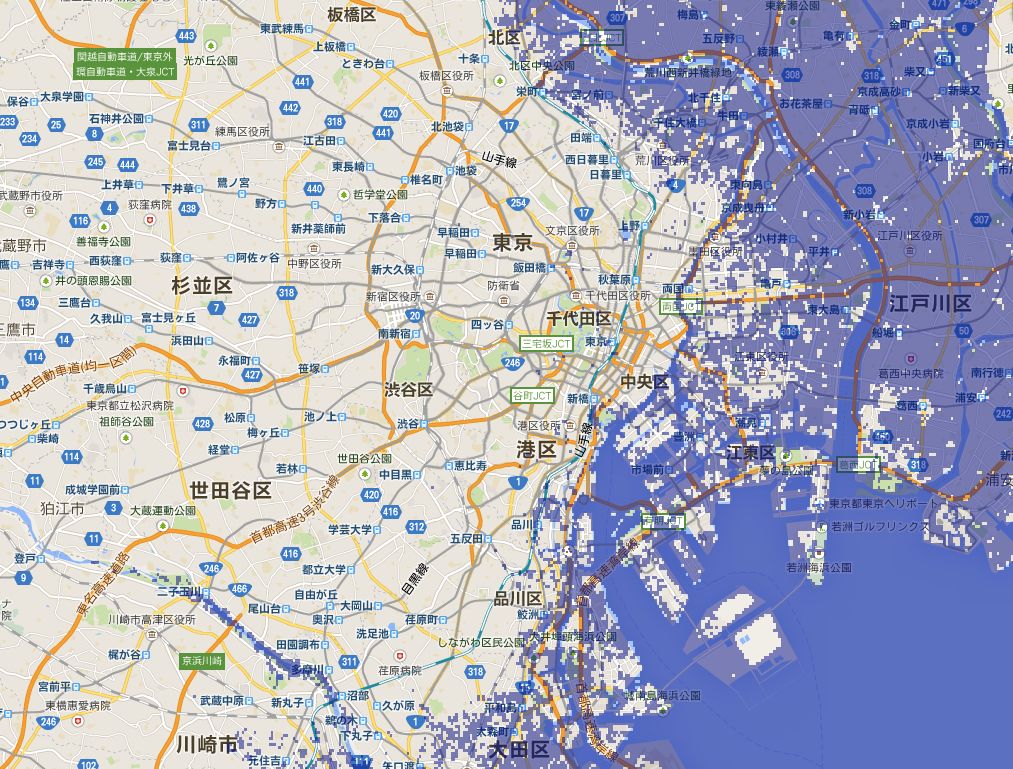 Climate scientists estimate that the melting of Greenland’s ice cap would cause a 7-meter rise in global sea levels. Here’s what Tokyo would look like with 7 extra meters of water to contend with. Most of the shitamachi “low city” to the east ends up part of a much larger Tokyo Bay. Also lost to the waves are the fish market at Tsukiji, Haneda Airport, and Tokyo Disneyland in Chiba Prefecture. (Map made at Firetree.net.)