Javier Castaño (@Xabel on Twitter) was born in Asturias, on the northern Spanish coast. Just before the turn of the century he moved south to the city of Malaga, where three years ago he started working as a shoeshiner in the Café Central.

Despite this humble background, today Castaño is recognized as a branding specialist, with deep knowledge of diplomacy on social networks. He has received global media attention for giving Twitter accounts to numerous local and national governments—not charging a thing for these highly sought-after account names, which he secured in the early days of the service, but handing them over freely so they can be put to good use. Recently he transferred the account @Japan to the government of Japan. We spoke with him about this initiative.

You have been transferring accounts to governments for at least three years. How did this start?

I joined Twitter in 2007, when I registered my first account, like many others. The structure of this social network seemed very simple to me, and I saw parallels between the user-follower simplicity and the relationship between city and citizen. I realized that Twitter made sense at a local scale. 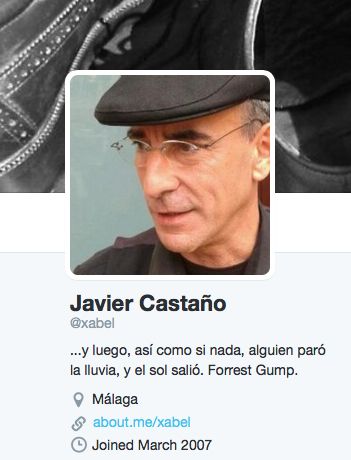 Castaño was an early adopter of the Twitter service.

I searched for toponyms and, to my surprise, I found that except for “Paris,” “Barcelona,” “London,” and “New York,” most of these names were unregistered. I started securing these accounts, beginning with my place of birth, Mieres in Asturias, and then moving on to Oviedo, Gijon, and Asturias. Next I jumped to my adopted region and got Malaga and Andalusia, as well as Madrid. As most toponyms were unregistered yet, I thought I should look for “global brands” like “Canada” or “Rio de Janeiro”—toponyms with similar pronunciation in many languages. One day I saw that “Roma” and “Japan” were still unused, so I registered them too.

Two years later, during the Christmas season in 2009, I saw that Twitter had become a huge global village. It was time to reach out to some embassies in Spain. However, most governments didn’t fully understand Twitter then, and my first try was fruitless. It was two years later, in 2011, when I finally saw that most of these institutions were joining Twitter. From that point on it became much easier to directly contact them and start a conversation.

Still, it turned out to be surprisingly difficult to get my proposals taken seriously. Thanks to the assistance of the social network expert Matthias Lüfkens, I was able to contact Shikata Noriyuki, then Japan’s deputy cabinet secretary for public affairs and director of global communications for the Kantei. I had brief conversations with him until they stopped around the end of 2012. [Shikata left his Kantei post and went to the Japanese embassy in London in 2012.—Ed.]

The Japanese government took control of the @Japan account on March 10. How did you arrange the transfer? 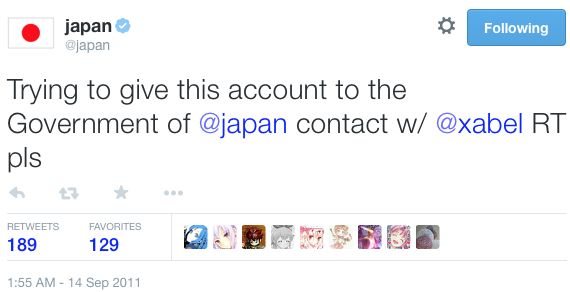 Castaño first reached out to the Japanese authorities with this 2011 tweet.

It happened thanks to some coincidences. I had already contacted Mr. Shikata, who promised me he would put me in contact with the current deputy cabinet secretary for public affairs, Sone Kenkō, and I also wrote an email to the embassy of Japan in Spain. One morning I saw that Mr. Sone was following my @Xabel account and the @Japan account on Twitter. When I came home from work I had an email from the embassy telling me that he was the right person to hand over the account.

I sent him the password for @Japan right away, along with the instructions to change the email address associated with the account and information on the verification process. Twitter verified the account soon afterward, although I note that the Japanese government has been very cautious throughout the process.

Your initiative seems to have saved these accounts from users who could have put them to commercial use.

I noticed that these accounts were undefended. As an enthusiast of everything related to branding, I thought it would be a pity for these accounts to be registered by anyone for other means. In recent years I’ve been the object of a lot of criticism from people wanting to take control of these accounts, even when I was trying to transfer them to the governments.

I am a fan of the @Sweden account, in which a rotating spokesperson takes control of the account every week and shows his country to the world in his or her own way. Many people wanted to carry on that same concept as private citizens and demanded that I hand them the accounts. When these users realized that I wasn’t going to transfer the account to anybody who is not a government official, they even insulted me. But now things have changed. I receive a lot of positive feedback and gratitude—not just from officials who operate the accounts, but also from people of the countries whose accounts I’ve transferred.

I don’t want to see accounts with these toponyms used for commercial purposes, because we’re speaking about the image of a nation. With the @Canada account it was clear that having this name makes a difference. It’s just not the same with the francophone version of the same account, which has many fewer followers.

I’d like other users who have registered accounts with toponyms to consider sharing them with their fellow citizens, transferring them to the relevant institutions. I believe that Twitter must take part in this matter and protect the toponyms like it does for corporate brands. It would be a shame to see what happened to @Colombia, an account that was suspended after a struggle over its control, take place again.

Personally, I’d like it to be something like the @Sweden or @Canada accounts, something focused on the world. Or something focused locally, to serve the citizens. However, I believe it would be great for @Japan to enhance the brand image of the country abroad, showing Japan with high quality pictures. If it is managed properly, it can become the first thing any user will find when they search for “Japan” on Twitter, and it will have great positioning in Google and other search engines, too.

But my duty ends when I hand over the accounts, and now the citizens of Japan have to decide what they are willing to do with it. I do have to say that I don’t like to see this kind of account managed irresponsibly. It makes me happy to see the work well done.

Along with your social media activities, you work as a shoeshiner, something that has drawn much attention. How do you spend your days in Malaga?

I’ve been working as a boot polisher for three years now. Before that I was working as an old-school draftsman. This was my actual profession for many years, but the arrival of computers in the field pushed many people out and forced me to try other jobs. I worked in architecture, in the lumber industry, in graphic design, and in web positioning and online marketing, among other things. But three years ago the economic crisis started in Spain. It tore down everything. I found myself unemployed. I didn’t have access to any kind of unemployment compensation since I’ve been self-employed for most of my life. As my savings ran empty I started to worry.

I thought it would be a good idea to polish shoes. When I was a child, every time someone asked me what I wanted to become when I grew old I answered “shoeshiner,” because I remember being interested in the work and all the tools of the man who polished my father’s shoes. One day, when I was going for a walk, downhearted because I was unemployed, I noticed everything was dirty in the port of Malaga because of the construction work nearby. The shoes of everyone there were coated in dust. When I saw that, I realized I could earn some money this way.

Now this sort of work is banned on the streets in Malaga, so I tried an alternative approach to the tradition. I went to the Café Central and pitched the idea of being the in-house shoeshiner. They loved the idea, and I’ve been polishing shoes from Monday to Friday, from 8:00 am to 3:00 pm, for three years now. I spend the evenings learning more about my actual profession, and I’m waiting for the crisis to end so I can work in an office again.

Today I’m very aware of the brand image of many institutions, and I’ve been learning a lot in this field. However, some economic resources are necessary to embark on new projects, and in my current situation I don’t have enough. Being a shoeshiner doesn’t bring me much money. Some months I have to struggle to pay the rent.

But thanks to my activities on social networks, and together with some governments, I‘ve been able to build contacts and to increase my visibility. I hope this will lead to a good chance for me sometime soon.

(Based on a telephone interview carried out in Spanish on March 21, 2015. Banner photo: Castaño at his shoeshine stand at the Café Central in Malaga. © Álvaro Cabrera.)